"How Are We Going to Do That?": Driven to Win Vehicle Installation

The vehicles in Driven to Win: Racing in America are displayed in a much more dynamic and contextualized way than we’ve attempted in previous car exhibits. Cars that have been displayed for decades on the floor are now elevated and (in some cases) tilted, to recreate how you would see them while racing. The payoff in guest experience will be significant, but these varied vehicle positions required extensive conversations, engineering, and problem solving between our internal teams and kubik maltbie, our fabrication partner. This post highlights four of the most notable car installations.

The 1965 Goldenrod Land Speed Race Car is now displayed on a salt-flat mimicking platform just three inches high. For most vehicles, three-five people would use a couple of short ramps and push or tug the vehicle up, all in less than an hour. But for a vehicle that is 32 feet long and sits less than 2 inches off the ground, another solution had to be found—since no ramp long enough to prevent the vehicle from bottoming-out would fit in the space provided.

As a land speed racer, Goldenrod achieved its fame in miles per hour, not in turning ability. To get the vehicle anywhere besides straight back and forward, custom gantries (mobile crane-like structures) are needed to lift it off the ground so that it can turn on the gantries’ wheels, not its own. The gantries provided inspiration to solve the issue of how to raise the Goldenrod high enough to make it onto the exhibit platform. 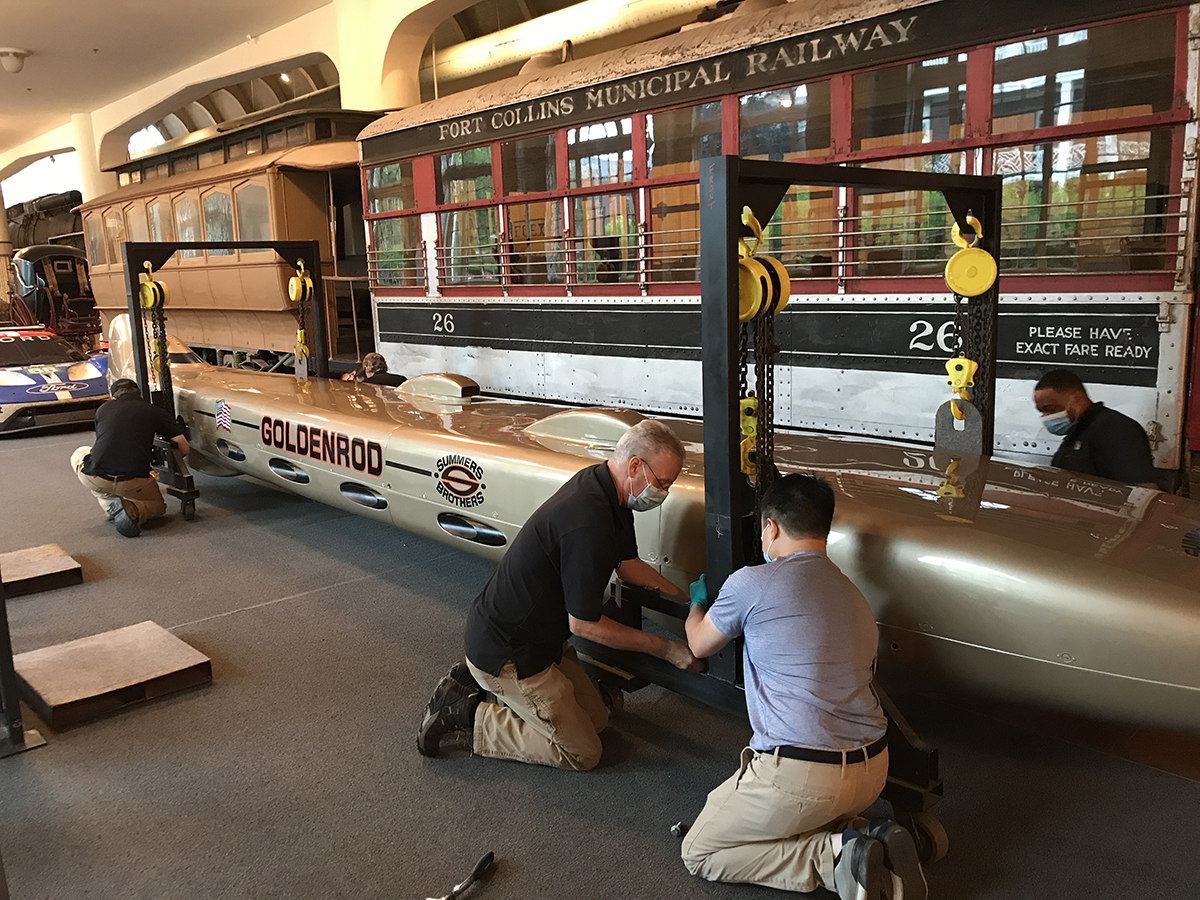 Since Goldenrod can be raised several feet once it is attached to the gantries, we were able to get the vehicle as close as possible to the platform, align it properly, then detach the back gantry and lift it onto the exhibit platform. This ability to lift the gantries independently was critical to our success. 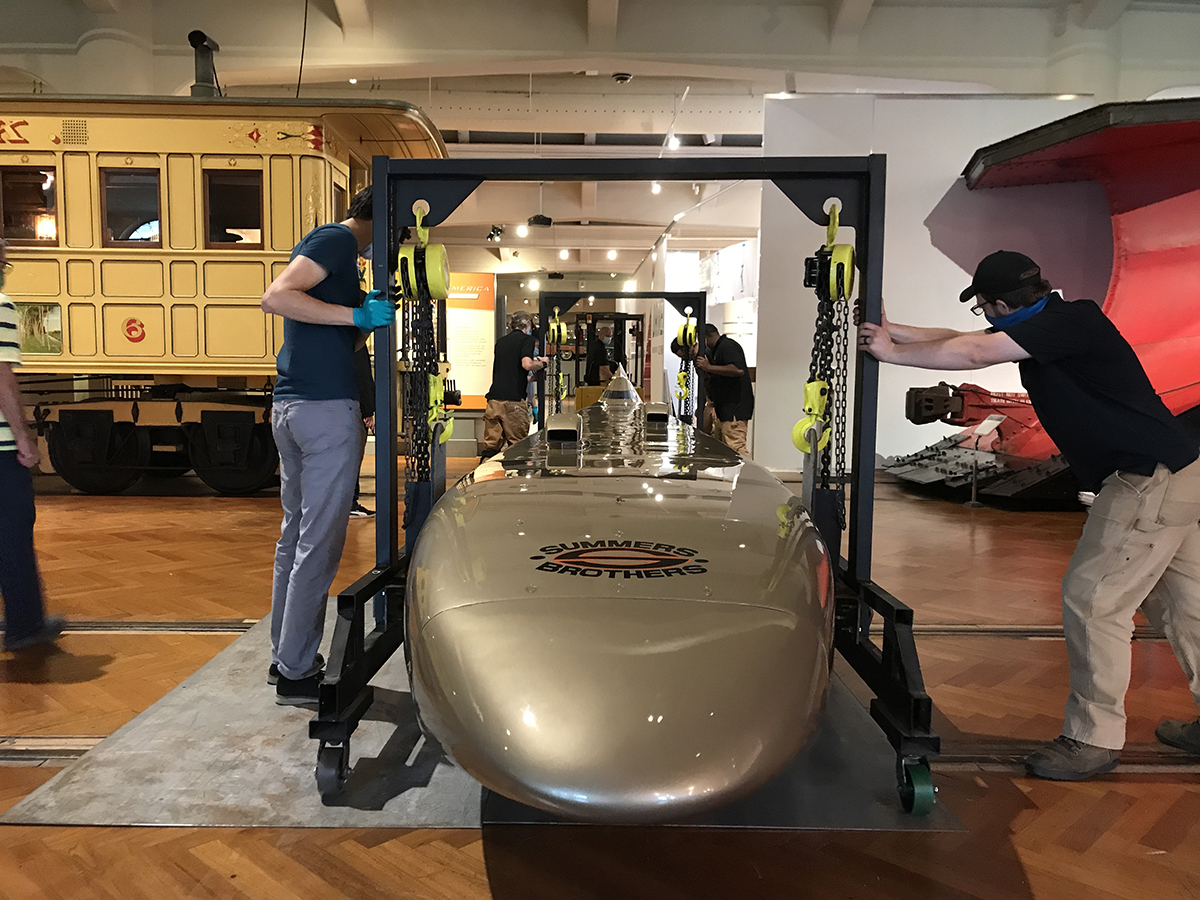 A forklift is attached to the rear gantry and used to tow Goldenrod into position over railroad tracks covered with steel plates.

Sections of plywood and Masonite were laid to the same height as the exhibit platform. At this point, the rear gantry was rolled forward onto this temporary surface, aligned once again with its hubs. 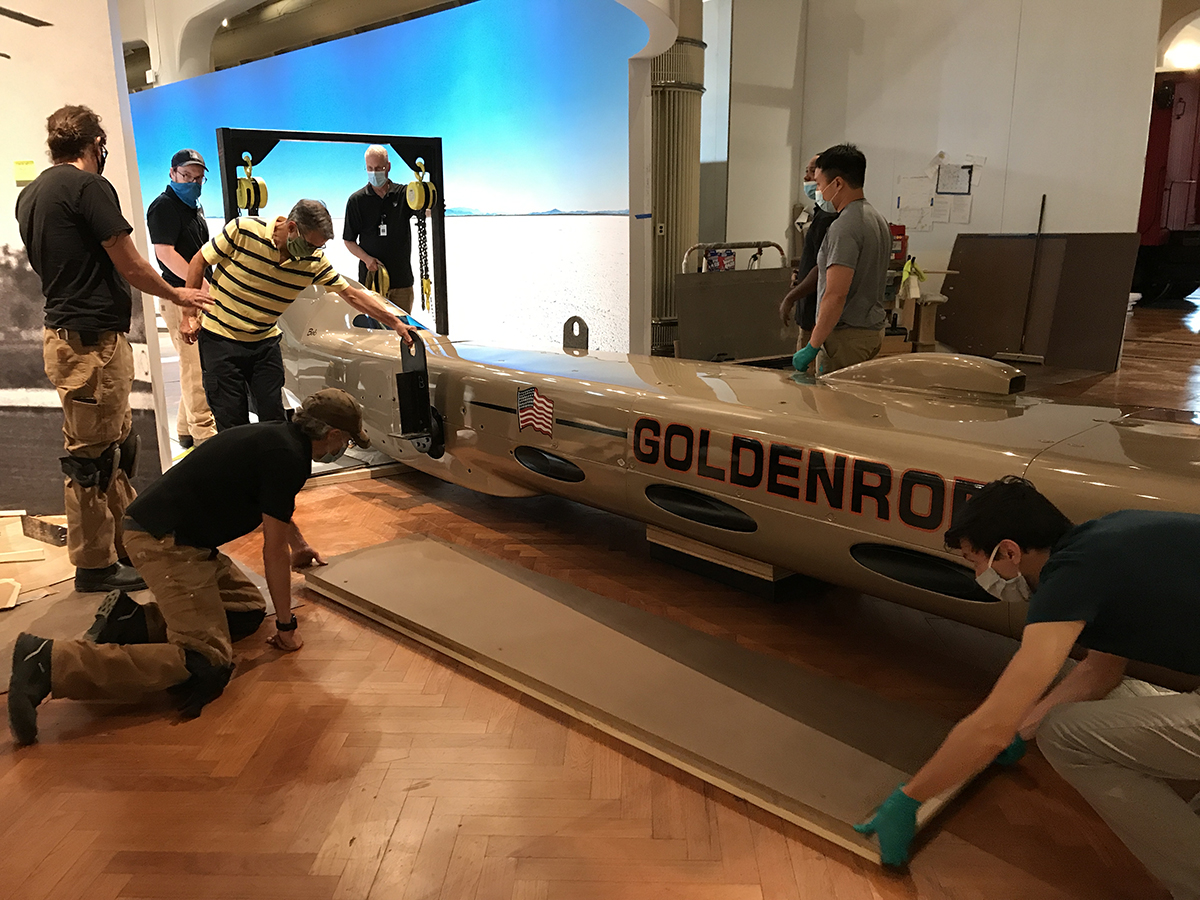 Plywood and Masonite were used to transition the gantries to the correct height to roll Goldenrod into the exhibit.

The back gantry was then reattached to Goldenrod, allowing three-quarters of the vehicle to roll onto the exhibit platform. 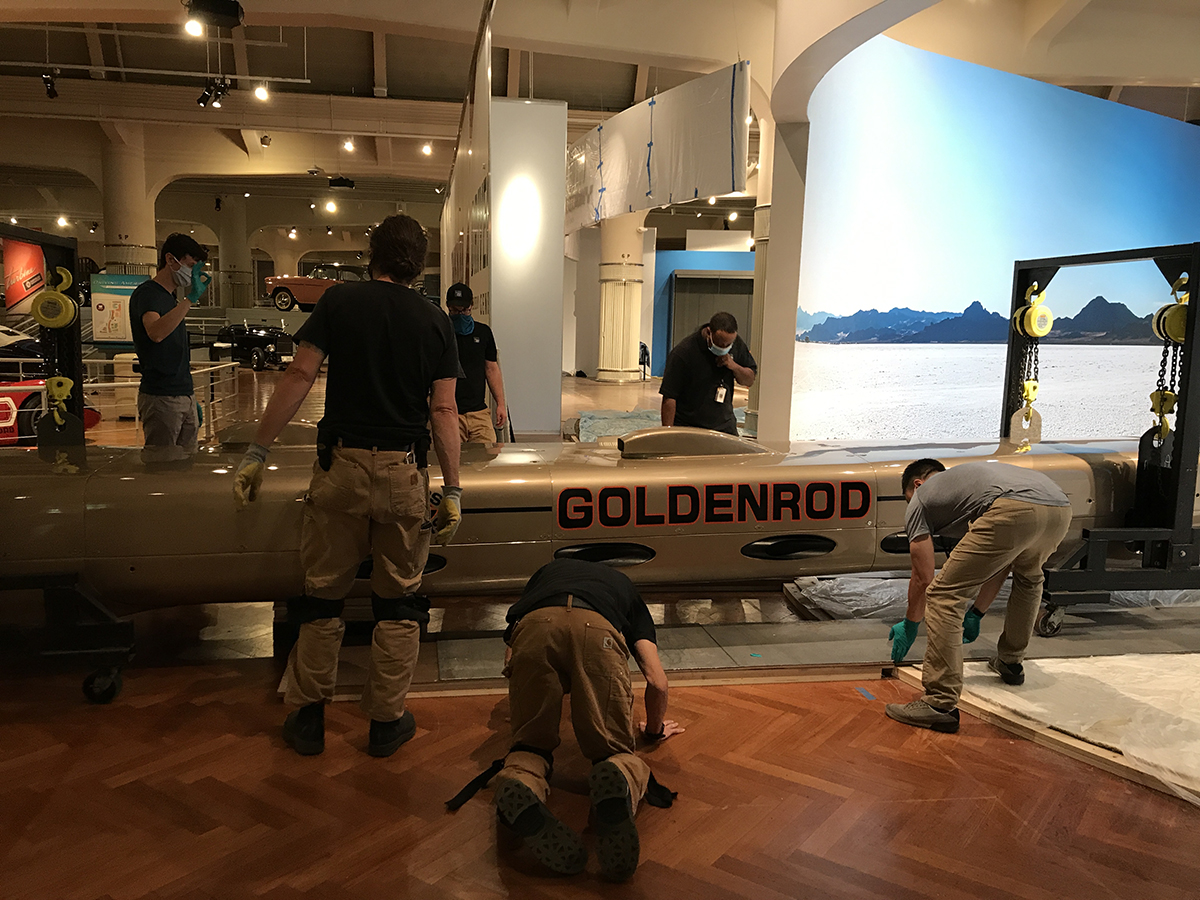 The same process was followed with the front gantry, and the vehicle was then adjusted into place. Steel plates and Masonite allowed the gantries to roll on the platform without damage to the faux salt surface. 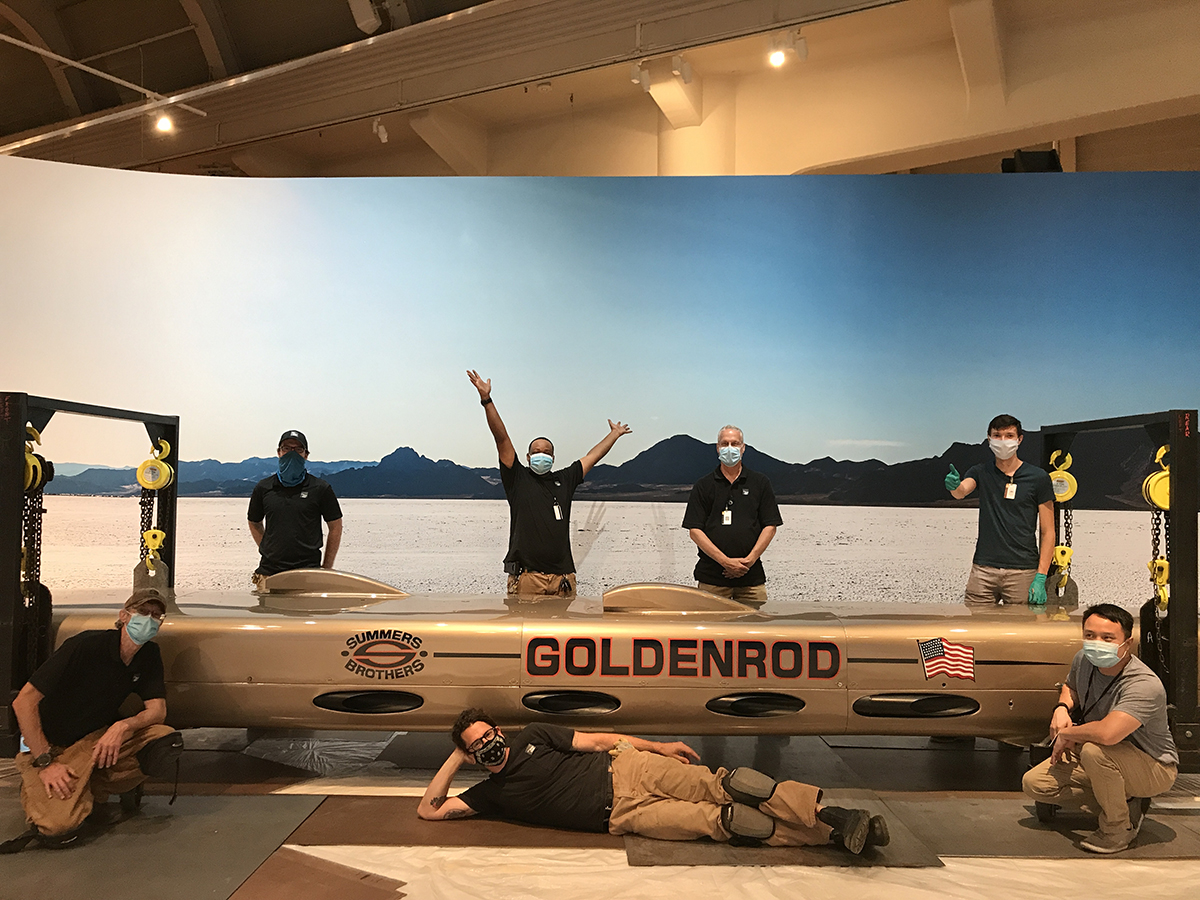 Installation into the Winner’s Circle

The Winner’s Circle is the premier location in Driven to Win, showcasing some of the most renowned winning vehicles in all of motorsports, and deserves to be elevated in display. During the planning process, we first returned to our typical method of placing cars on a platform: ramps. But in this case, as with Goldenrod, not every car would have made it up a ramp with the pitch necessary, due to other exhibit items in the way. We went back and forth from idea to idea for some time.

What we finally settled on was what we’ve deemed “rolling jackstands,” or dollies. kubik maltbie took our measurements of these vehicles and fabricated these dollies out of Unistrut and casters. Each was custom-fitted and modified on site to conform to the load when the car was rested on top of them. Once on these dollies, the cars are very easy to move. They slide into the Winner’s Circle and the fronts of their platforms slide into place in a theatrical, modular way. 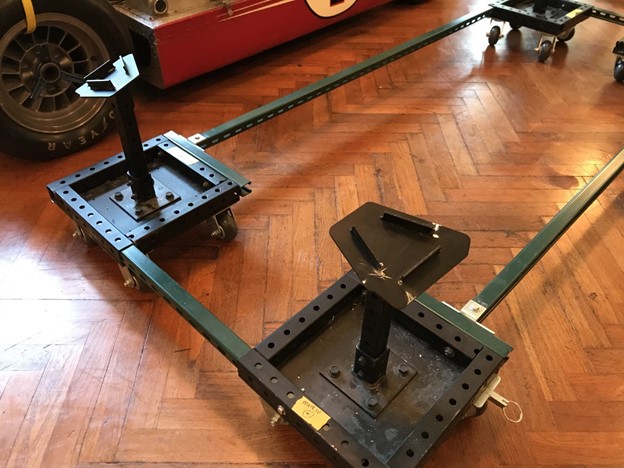 Custom dollies, or "rolling jackstands" allow vehicles to be elevated for display and rolled into the exhibit at the appropriate height.

By this point, half of the problem was solved. The other half was how to get these cars onto their jackstands. For this, we employed three techniques. First, we were able to sling some of the cars and lift them using a huge gantry on the back half and a forklift on the front. We used this method on the 1958 Moore/Unser Pikes Peak Hill Climb Racing Car. It was a slow but effective means of raising the vehicle just high enough that the jackstands could be slid underneath. 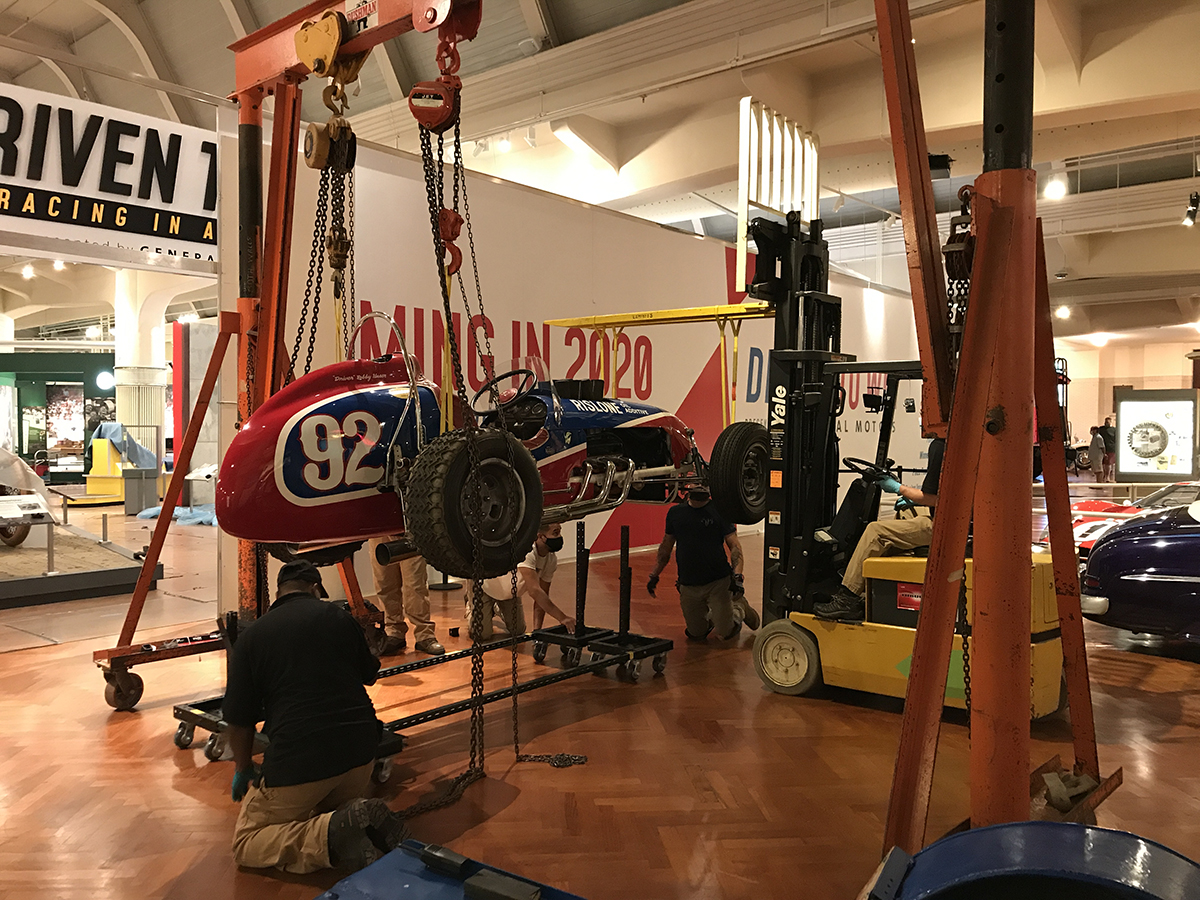 One vehicle, the 1956 Chrysler 300C Stock Car, had the ability to be lifted from below using floor jacks. 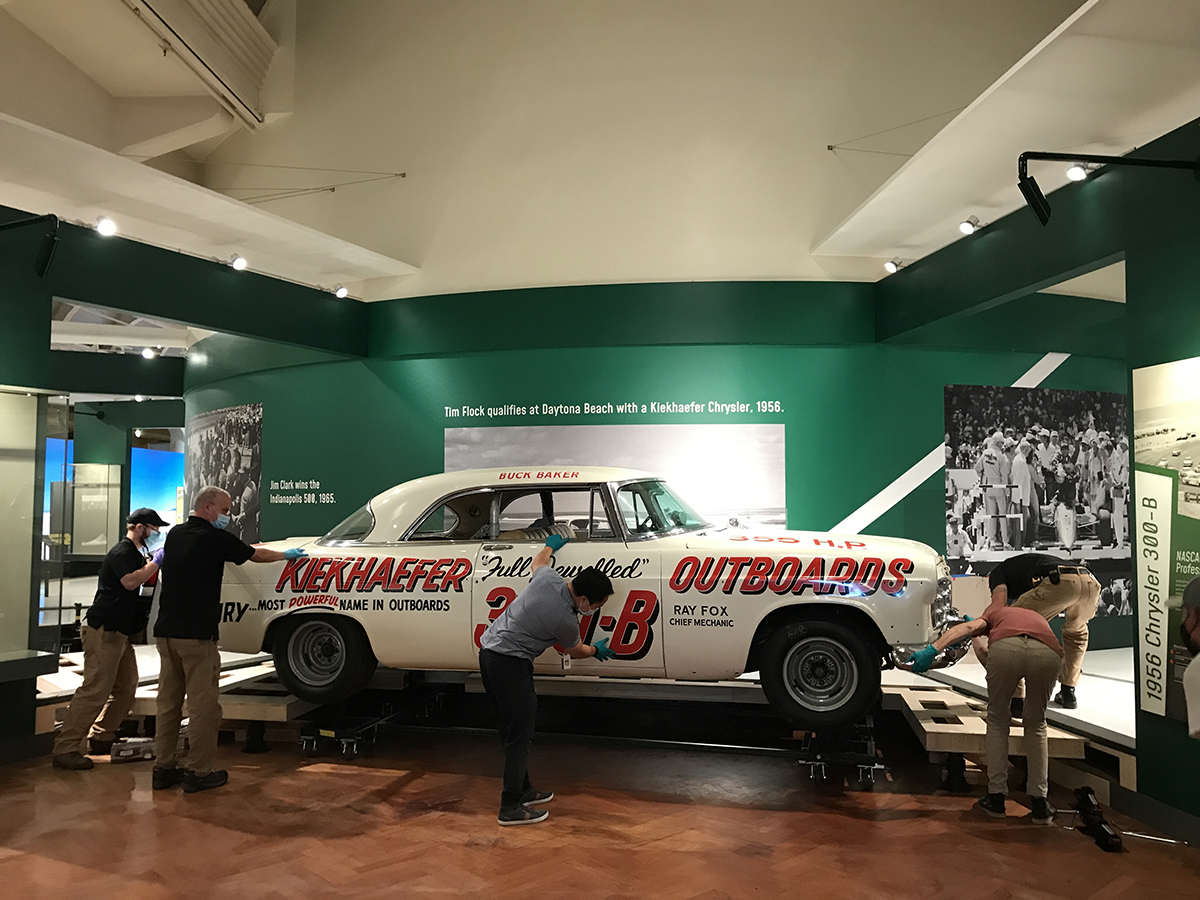 1956 Chrysler 300B Stock Car rolling into its display position.

Finally, some vehicles, including the Indy cars and the 1967 Mark IV Race Car, posed serious issues since they had nowhere that we could use a floor jack, and did not have bodies that could be slung with straps.

In this case, we benefited from having an expert volunteer on our team. Mose Nowland was one of the original engineers who built the Mark IV in the 1960s. A fantastic problem-solver, he designed a custom metal apparatus, which we call a “sling,” that would allow a telescopic handler to lift it. We had Mose’s design fabricated at a metal shop. Since the sling spread out the attachment points, straps could then be placed and balanced at appropriate points on the vehicles. It really helps to know one of the car’s original engineers when you need to figure out rigging stunts like this. 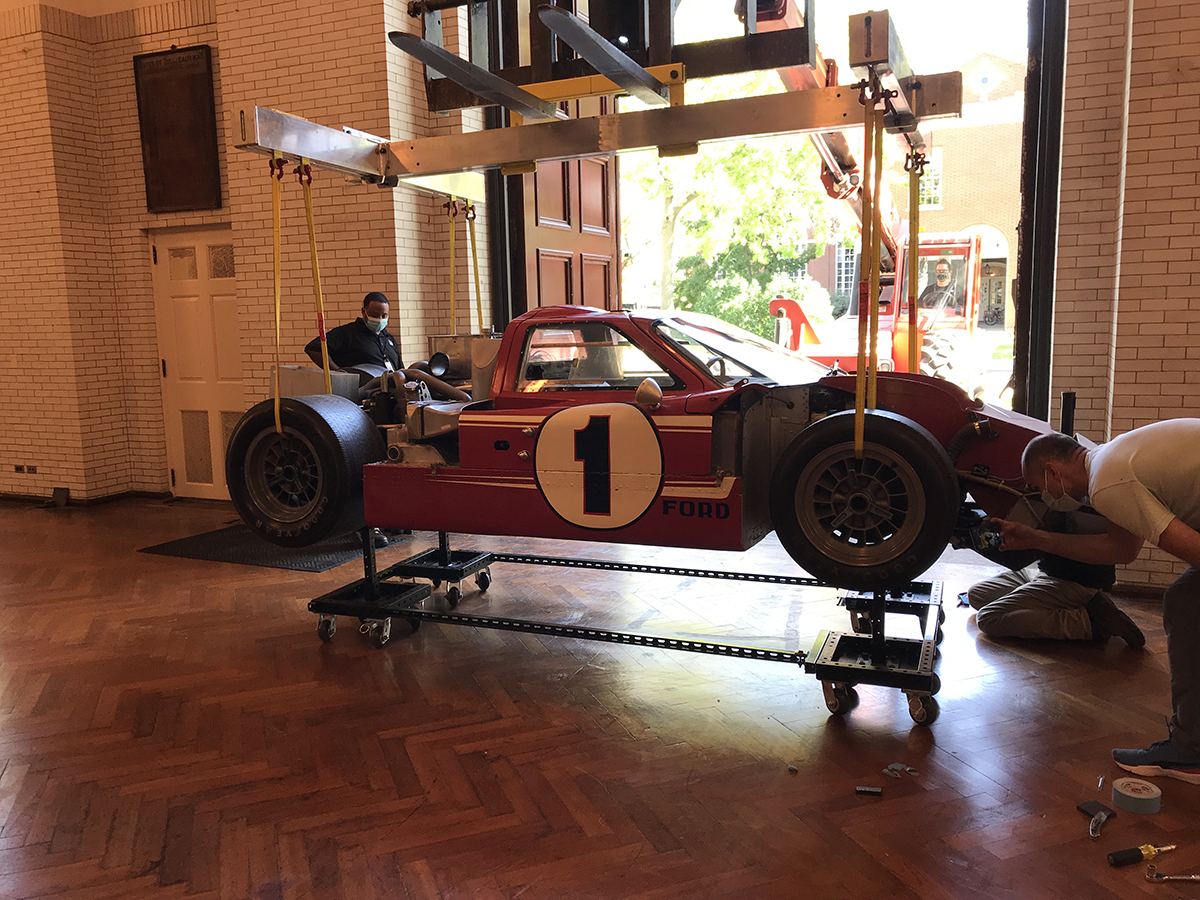 Mark IV being lifted onto its dollies with the help of a custom sling and a telescopic handler.

But what if we wanted some of these elevated cars to be on an angle, like they would be while actually racing? First, we needed to have that approved by a conservator, to make sure the car can physically handle years or decades in that position. Then, the same lifting methods described above were used, but the rolling jackstand dollies were made with legs of various heights. When the cars were set down upon them, they were strapped in with custom mounts so that they could sit comfortably for much time to come.

Ultimately, the goal of any artifact mount is to safely hold the object but not call attention to itself. We hope that we’ve succeeded in keeping the emphasis on an exciting presentation of these vehicles that we are looking forward to showing our guests. 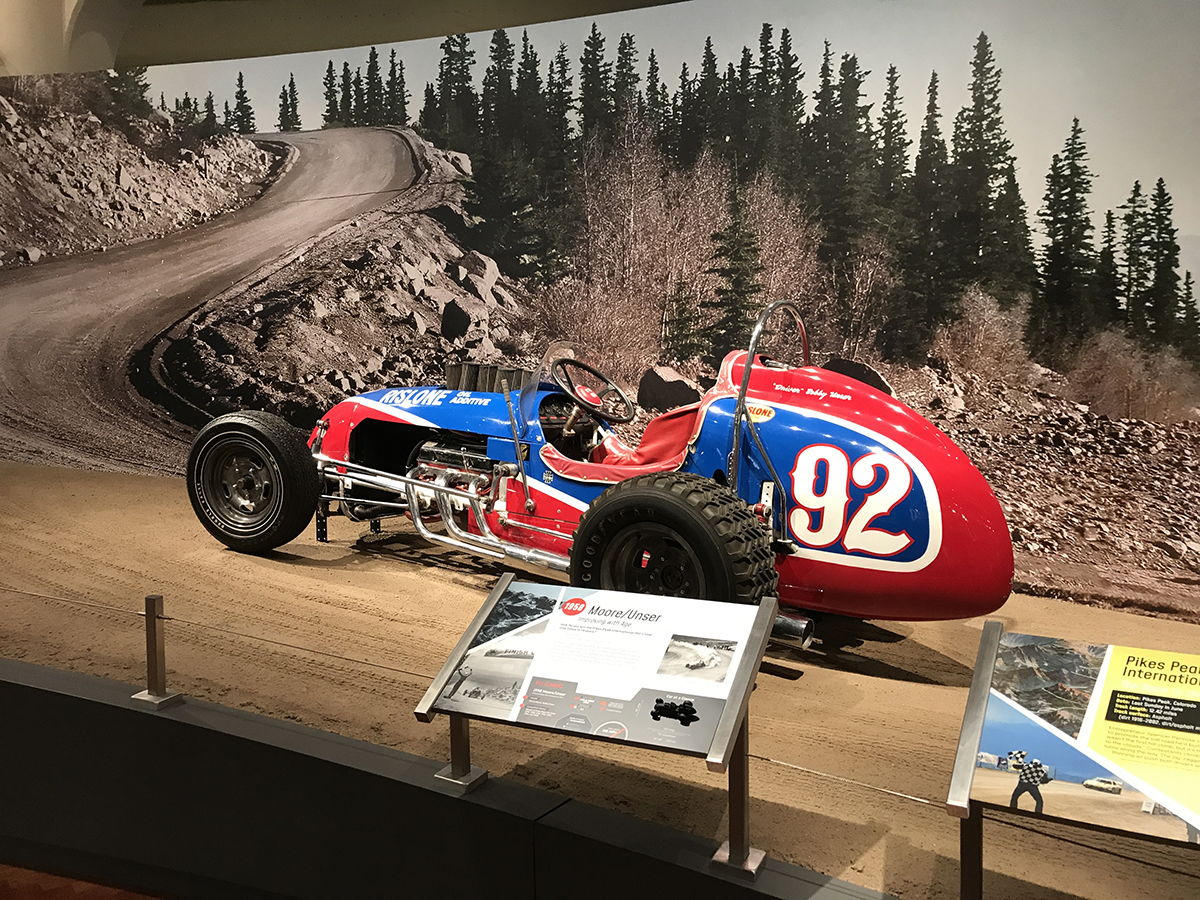 The 1958 Moore/Unser racing up our scenic recreation of Pikes Peak in Driven to Win. 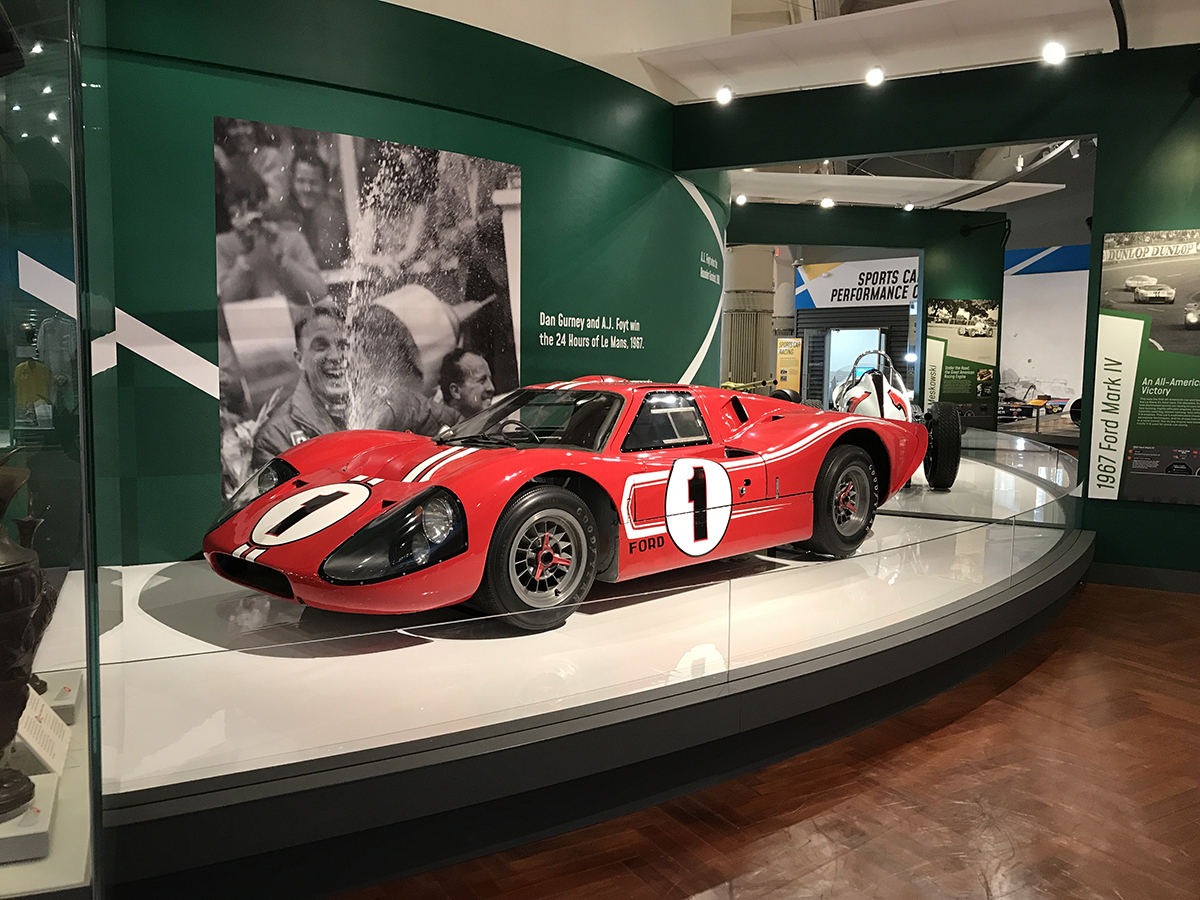 The Mark IV on permanent display in Driven to Win.