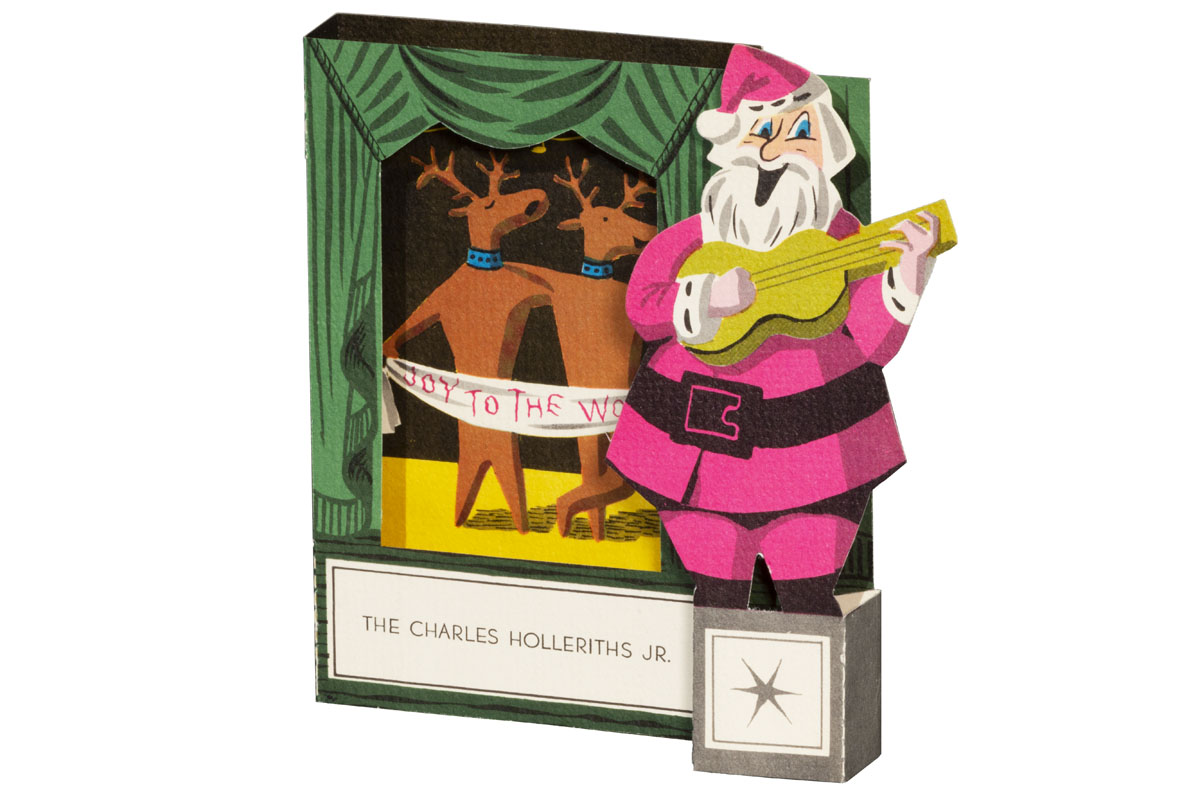 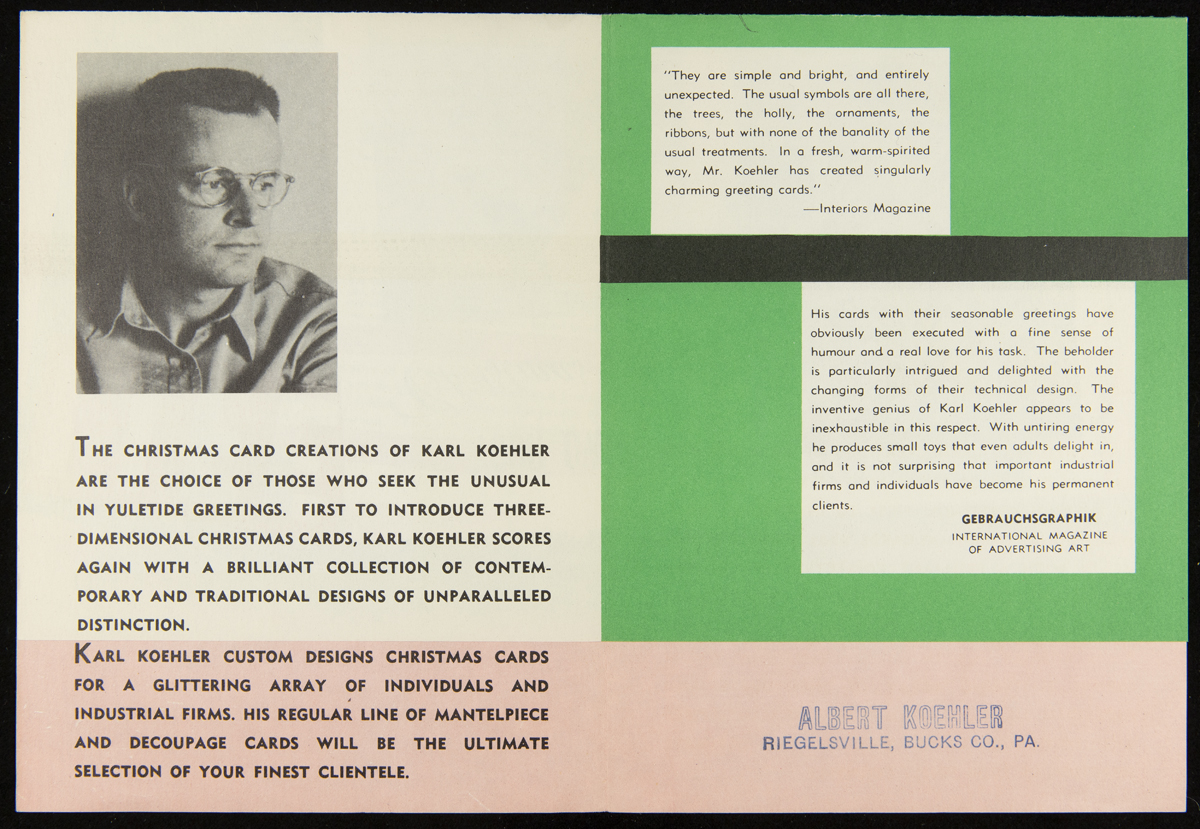 Karl Koehler is pictured in this advertisement piece from the early 1950s. / THF621157

Karl Koehler (1913–2000) was born in Hennepin County, Minnesota. When Koehler was fourteen, his father died, and the family moved to Philadelphia, Pennsylvania, to live with his uncle. Koehler trained at the Pennsylvania Museum School of Industrial Art in Philadelphia, and by 1940 was employed at the Pictograph Corporation in New York City. Working under Rudolf Modley, Koehler designed pictorial symbols used in business, corporate, and government publications to communicate statistical data.

During the Second World War, Koehler directed artwork for military training manuals, and in 1942, co-created two award-winning posters for the National War Poster Competition. He returned to Pennsylvania after the war and settled in Coopersburg. There he began designing Christmas cards and holiday decorations. 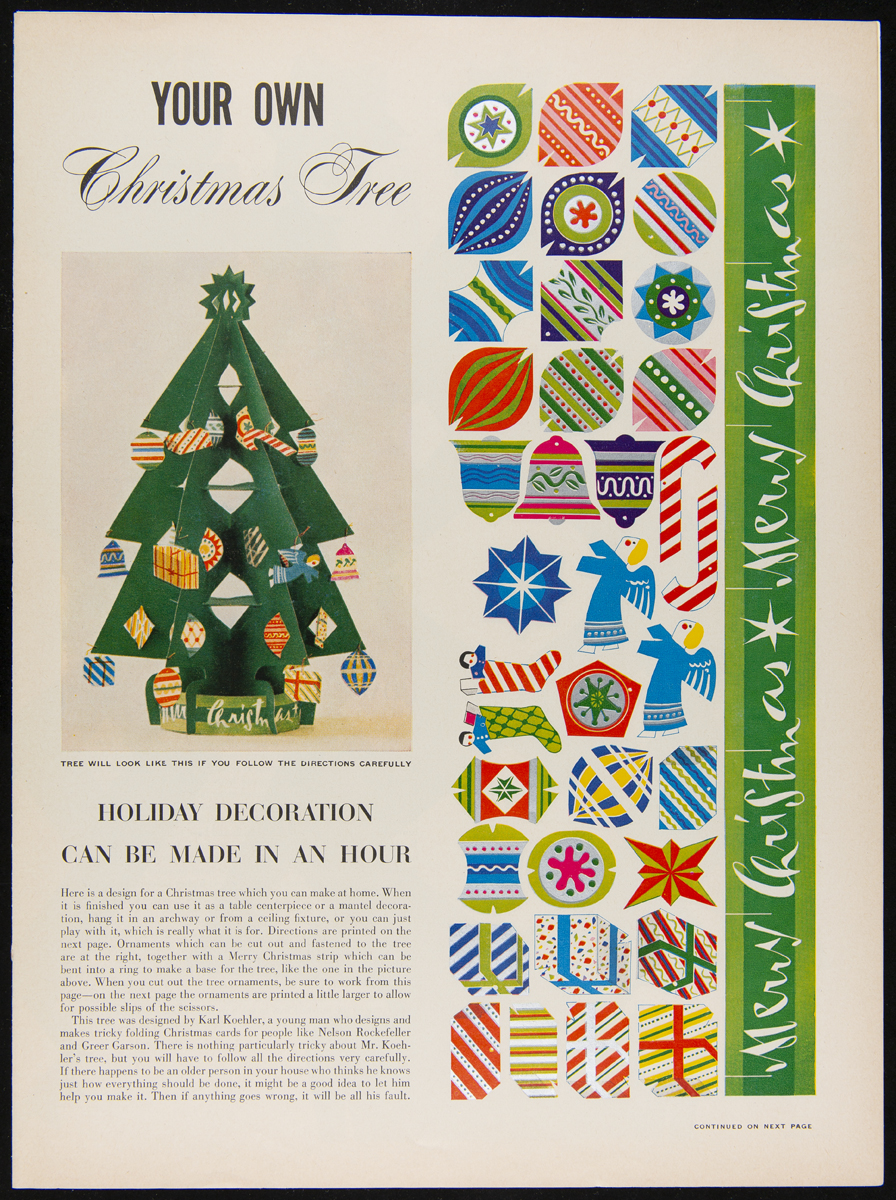 In 1950, Koehler dreamed up a Christmas tree that people could construct from the flat pages of the December 25th issue of Life magazine—a holiday surprise for the whole family. / THF624861

Koehler's whimsical three-dimensional, hand-assembled decorations and cards delighted children and adults alike. He made traditional folded holiday greeting cards for businesses and corporations, but none rivaled the depth-filled creations Koehler handcrafted in his studio. He trademarked the name "Mantelpiece"—where better to display pop-up Christmas greetings?—and sold his holiday creations in high-end department stores and museums. His list of clients included Nelson Rockefeller, Greer Garson, and Benson Ford. Koehler's artwork was fresh, colorful, and bright, incorporating a bit of fantasy and fun into the traditional symbols of the seasons. And his cards literally added an unexpected dimension to holiday greetings. One European design journal stated, "Karl Koehler has … swept clean the dusty structure of greeting card design."

Christmas cards, as we know them today, first appeared in England in the early 1840s. Historians note that the first card showed a happy scene of holiday feasting flanked by images depicting acts of charity. The custom of sending Christmas cards, though not initially widespread, grew slowly and by 1850, Americans had joined the holiday tradition. By the late 1800s, more and more Americans began giving inexpensive and colorful cards—made possible by low-cost postage and new printing technologies—to friends, family, and acquaintances.

Many valentines in the 19th and early-20th centuries contained layers of embossed paper or other materials. Others had a pop-up element that made the valentine three-dimensional. / THF99091, THF166622, and THF313817

While Karl Koehler focused on crafting high-end Christmas cards, he appears to have drawn much of his card design and construction from late-19th- and early-20th-century valentines. Most 19th-century Christmas cards tended to be relatively flat and remained so well into the 20th century. Valentines, however, had greater dimensionality. English and American manufacturers produced elaborate valentines constructed of highly embossed paper, layered with colorful inserts and, more importantly, pop-up elements that made the valentines three-dimensional. One clue that valentines played a role in Koehler's Christmas card production is a listing from the estate auction advertisement after his death in 2000: "100 old pop-up/pull-out mechanical Valentines." 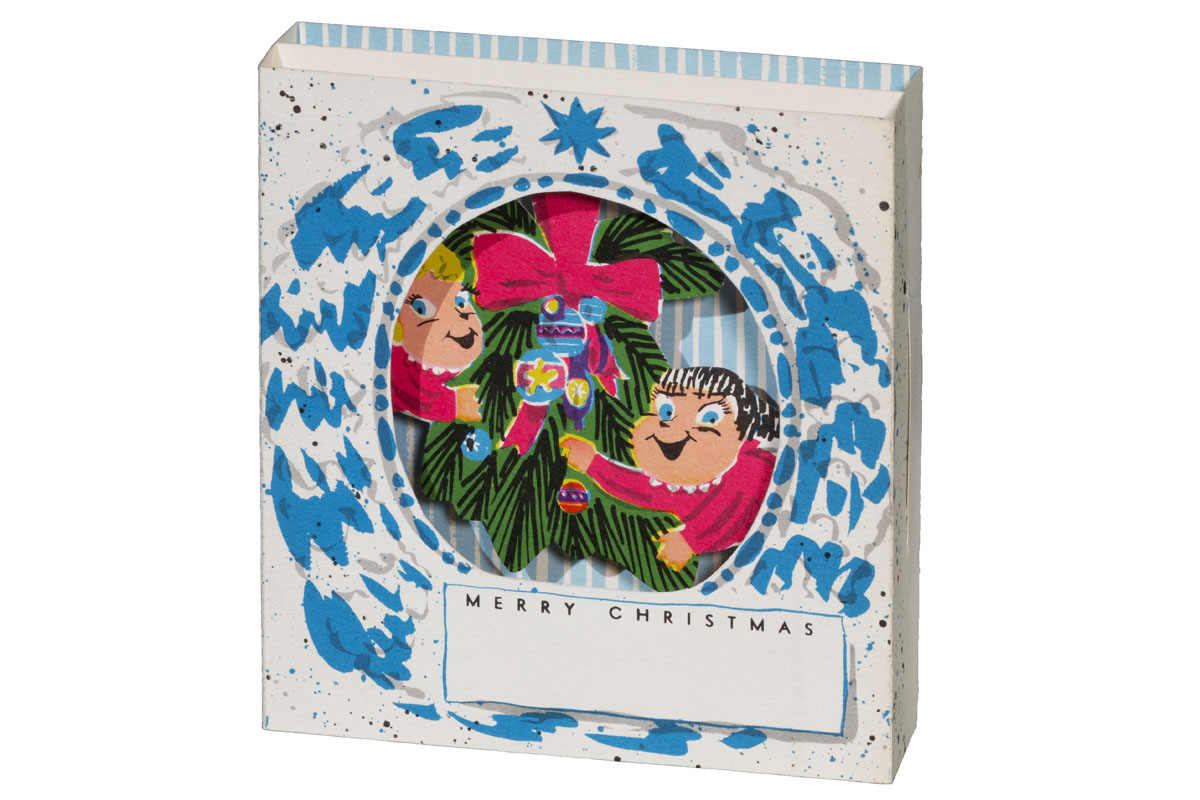 Other influences, such as pop-up and movable books, may have played a part in Koehler's designs. Movable and pop-up books usually included flaps, revolving discs (volvelles), pull tabs, and other mechanical devices that made elements on the pages move. By the late 1800s, publishers and designers produced these books—some with elaborate works hidden between the pages—mainly for children. New York-based McLoughlin Brothers began producing movable books in the late-19th century in the United States—one of the first American companies to do so. One of McLoughlin's earliest efforts contained colorful illustrations that folded or popped out into three-dimensional displays. While there is no documented connection with these types of books, several of Koehler's Christmas cards created a three-dimensional stage-like quality reminiscent of movable or pop-up books. 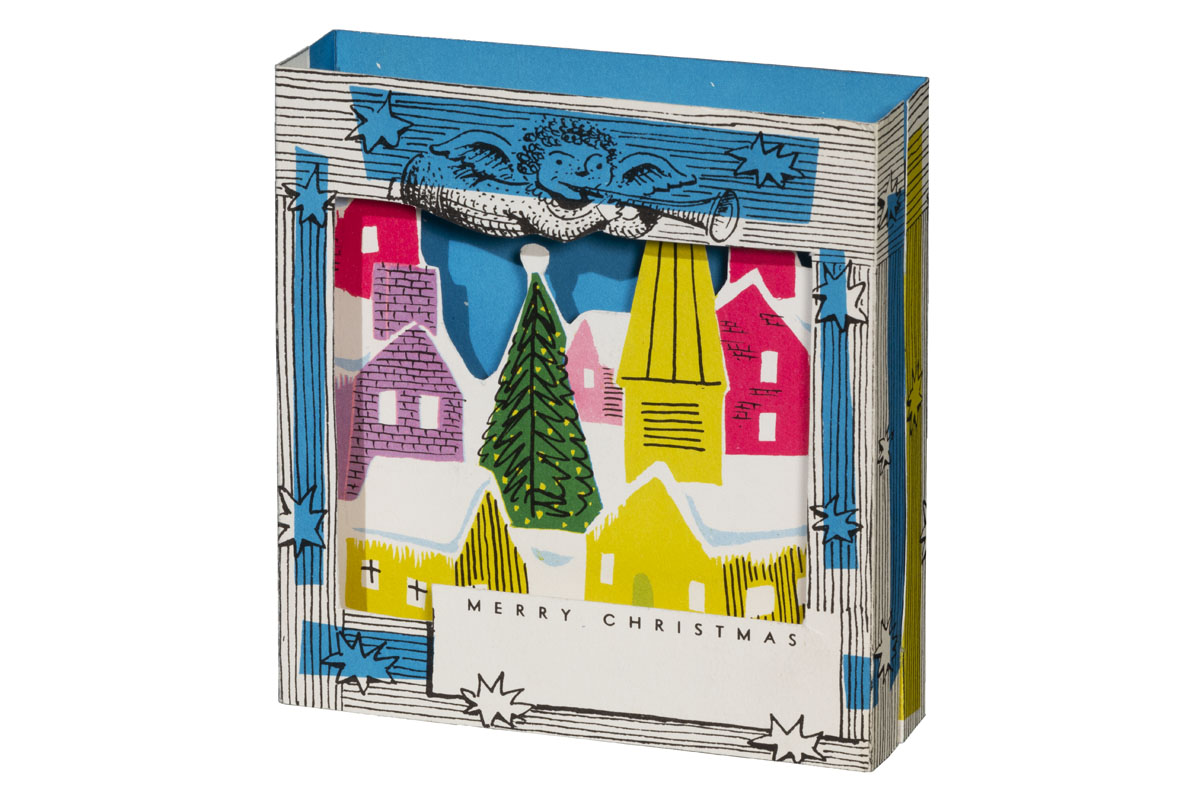 In the late 1950s, Koehler applied for a patent for a collapsible and expandable pyramid structure design used for "greeting cards, calendars, containers, advertising novelties, displays, geometric educational devices, etc." But a few years later, in November 1961, the last printed mention of his Christmas card production appeared. That same year, Koehler traveled to Ireland to help create an industrial design course at that country's National School of Art. He made other trips to Europe and later traveled to Brazil and wrote of his excursions. Existing documentation suggests that Koehler did not create any new three-dimensional holiday cards during the last decades of the 20th century. 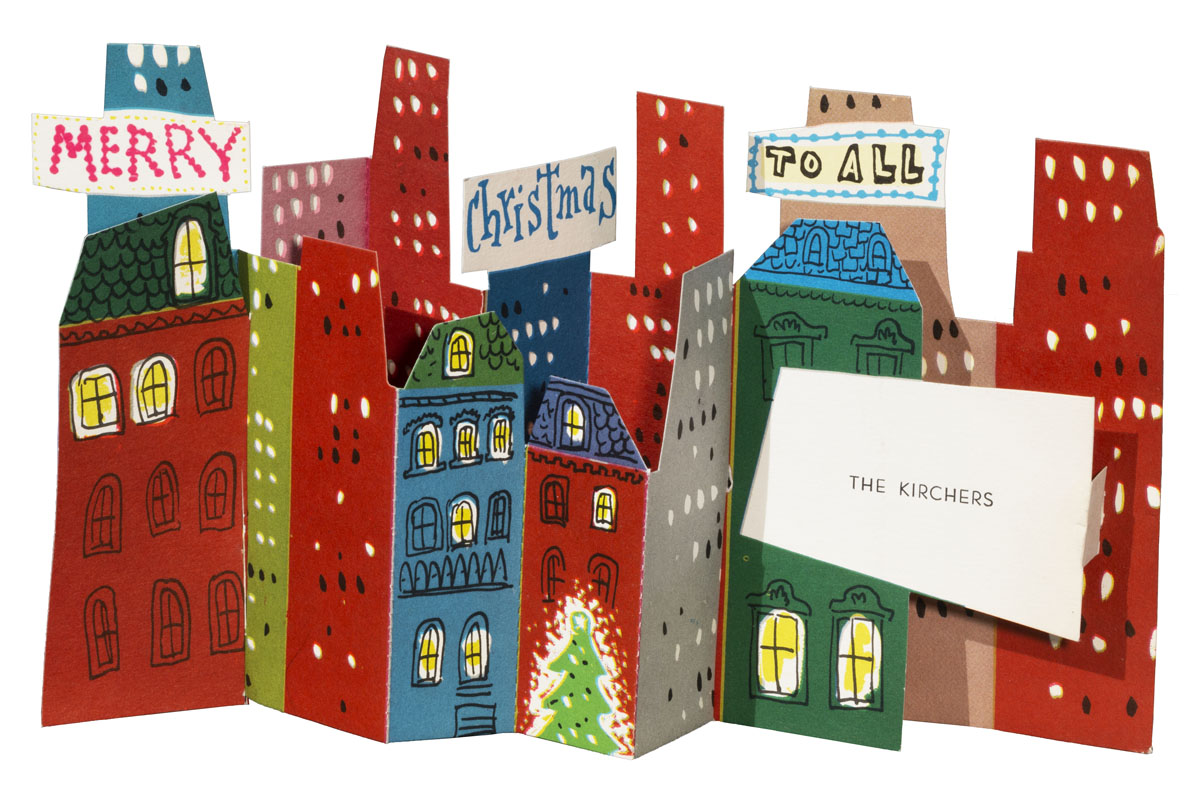 Today, card companies such as Graphics3, LovePop, Hallmark, and others create an array of elaborate holiday pop-up cards meant to delight both giver and recipient. Few have probably ever heard of Karl Koehler, but they would appreciate his designs and revel in his amusing creations.