As part of the William Davidson Foundation Initiative for Entrepreneurship, we have had the opportunity to explore a number of fascinating stories of entrepreneurs represented in our collections. Recently, we’ve examined the life and work of aspiring entrepreneur and automobile designer McKinley Thompson, Jr.

While working for Ford Motor Company, Thompson conceived of an idea for an all-terrain vehicle that would do for Third World countries what the Model T did for America. This post highlights Thompson’s life and career as the first African-American automobile designer and sheds light on his little-known project for a vehicle ahead of its time, dubbed the Warrior.

Finding His Passion
On an October afternoon in 1934, 12-year-old McKinley Thompson, Jr., was stopped in his tracks while walking home from school. The reason? He had spotted a brand-new silver DeSoto Airflow, the first silver-colored and streamlined vehicle he had ever seen. In an interview from 2001, Thompson recalled that “the clouds opened up for the sunshine to come through… It lit that car up like a searchlight.” Awestruck by the unique design of the car, it was right then and there that Thompson knew what he wanted to be when he grew up: an automobile designer. 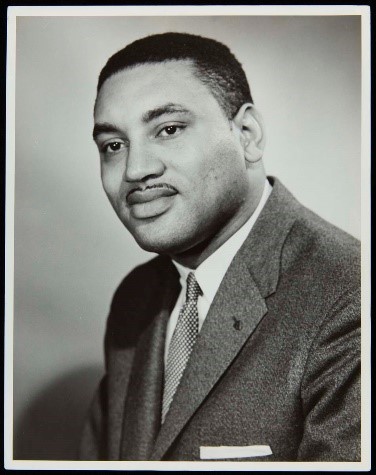 In his youth, Thompson showed promise in drawing and was particularly interested in futuristic themes. He participated in commercial art courses throughout high school and, upon graduation in 1940, completed drafting courses where he learned to plan projects and present his ideas through drawings and concept illustrations. With these skills, Thompson acquired his first job as a draftsman with the National Youth Administration. He then worked as an engineering design layout coordinator for the Army Signal Corps until he was drafted to serve in the Army Corps of Engineers during World War II. Following the war, he continued working for the Signal Corps until 1953, when he found an opportunity to pursue his childhood dream of becoming an automobile designer. 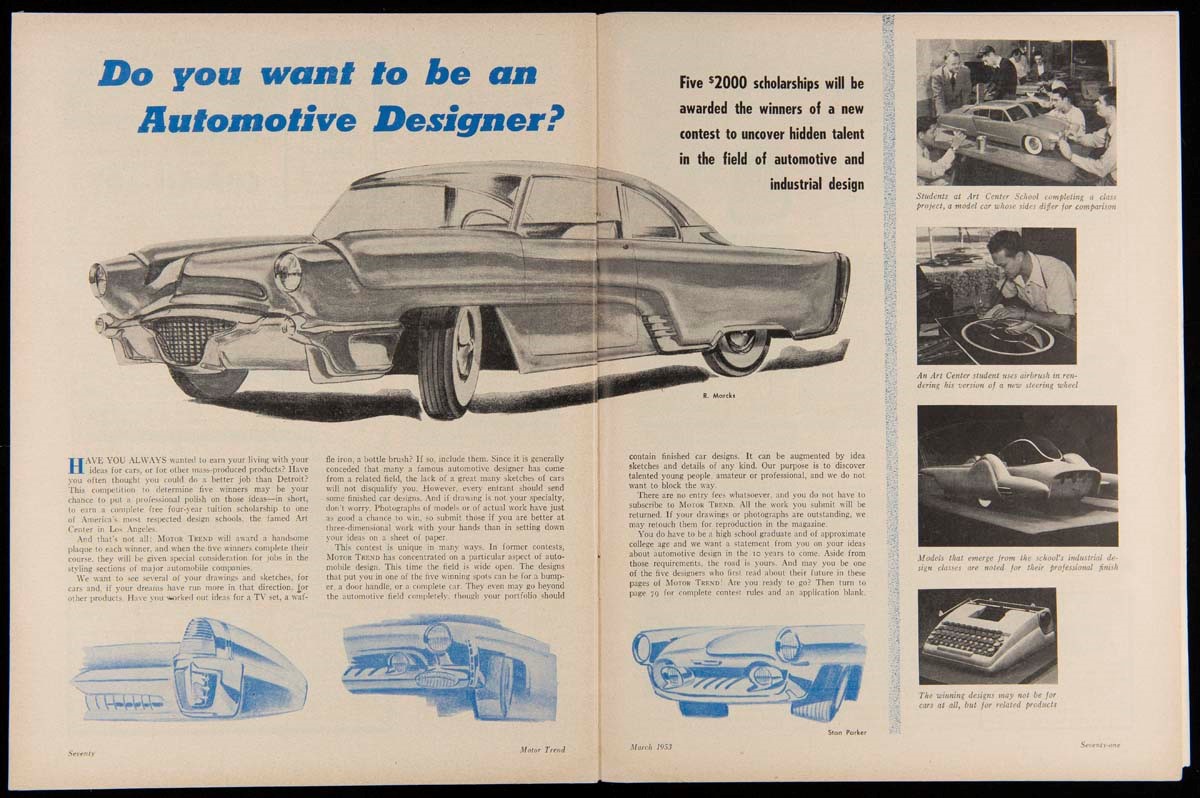 “Do you want to be an Automotive Designer” contest article from Motor Trend magazine, March 1953 THF299257

In March of 1953, Motor Trend magazine sponsored an Automotive and Industrial Design contest with the goal of discovering talented young adults. The prize? One of five, four-year tuition-free scholarships to the prestigious Art Center School of Design in Los Angeles – one of the most respected schools for industrial design. Contest entry required several drawings and sketches, photographs, or models of cars and other products, along with an essay responding to the prompt, “What I think the trend in automotive design will be in the next ten years.” For McKinley Thompson, this was the chance of a lifetime – and he won. 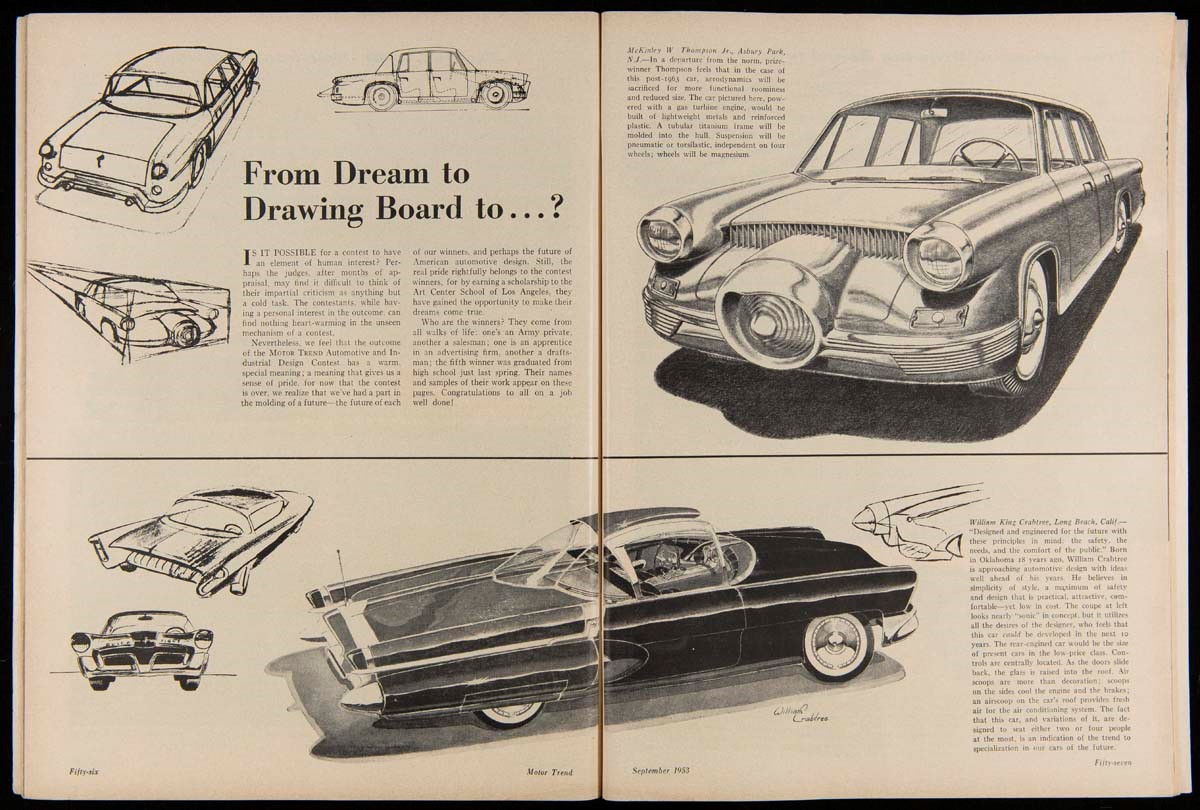 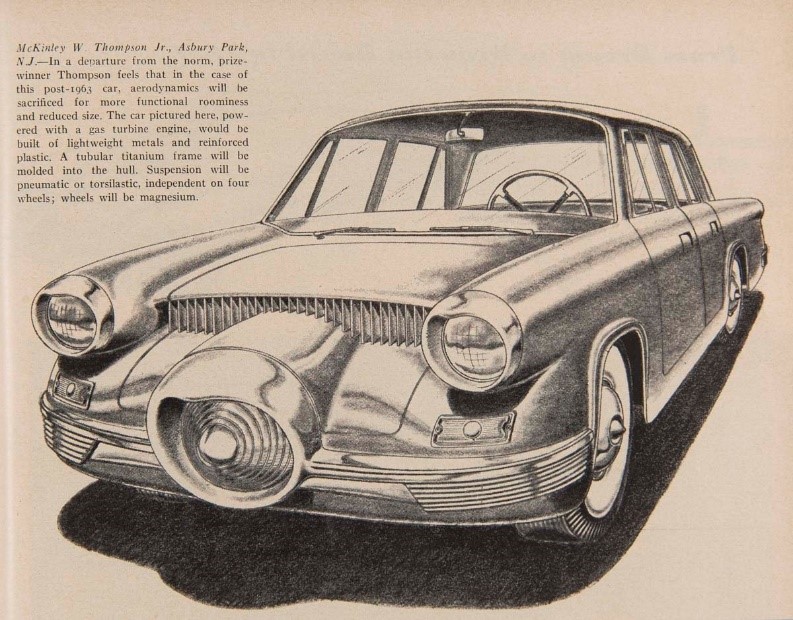 McKinley Thompson’s winning entry in the article, “From Dream to Drawing Board to…?” in Motor Trend magazine, September 1953. In his essay, Thompson wrote that cars of the future would sacrifice aerodynamics to accommodate “more functional roominess and reduced size.” THF299268

Thompson’s gas turbine car, which incorporated reinforced plastic (an unusual choice of material at the time), won him the top prize. Thompson became the first African American to attend the Art Center, where he excelled throughout his course of study. After graduation, Thompson was offered a job with Ford Motor Company in the Advanced Styling Studio, finally realizing his childhood dream and breaking a barrier by becoming the first African-American automobile designer.

In the Advanced Styling Studio, designers were given a great deal of creative freedom. This suited Thompson’s interest in futuristic themes, allowing him to contribute sketches for fantastical ideas, such as a flying car and a nuclear-powered multi-trailered truck. He also worked on the Allegro and Gyron concept cars and collaborated on design ideas for the production Mustang and Bronco. 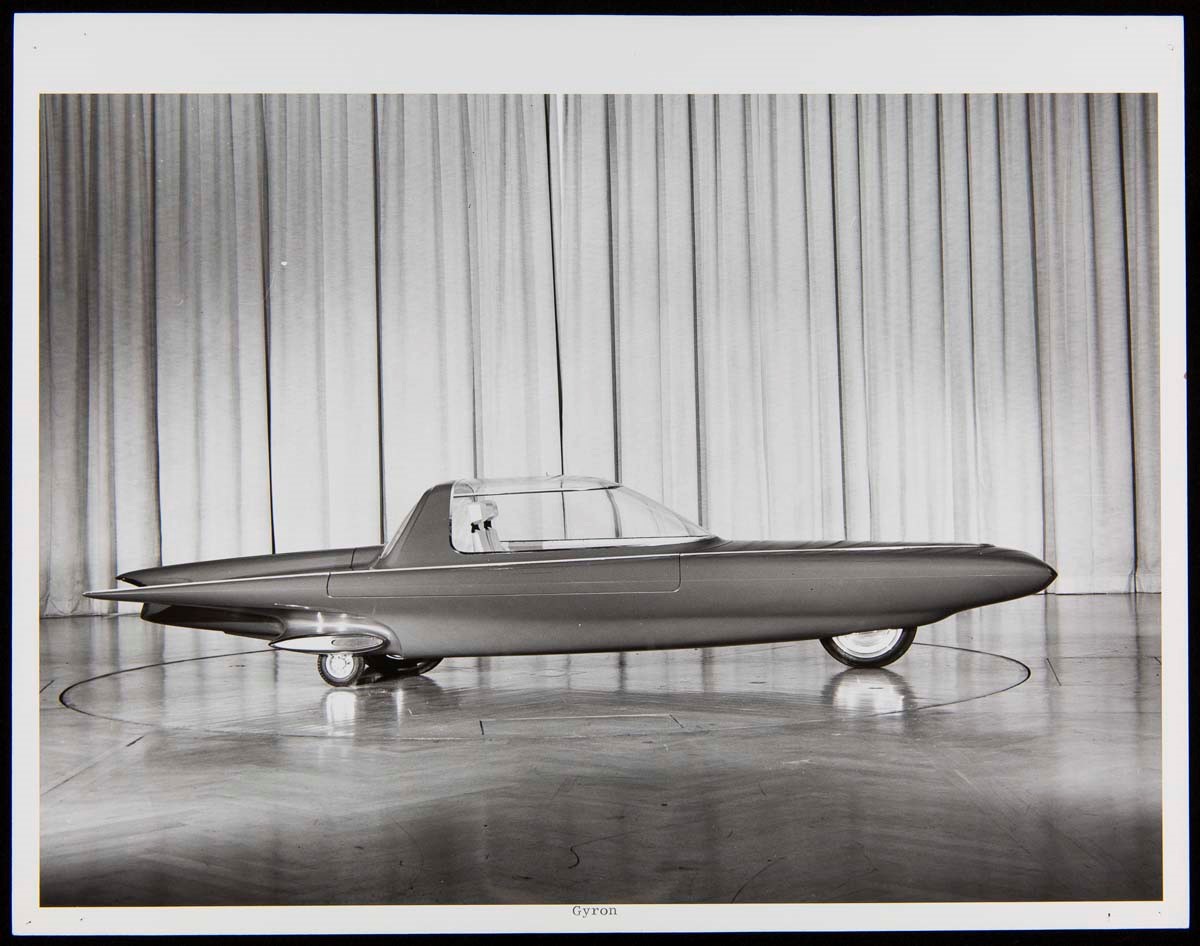 The Warrior
While Thompson’s career at Ford gave him the opportunity to work on a variety of vehicles and concepts that could change the automotive industry, his most innovative idea had the potential to change the world. Thompson envisioned an all-terrain vehicle for Third World countries that would be easy to build and maintain, with low production costs. But his vision extended beyond the vehicle, which he dubbed the Warrior. He anticipated auto plants – located in the developing nations that would use the car – bringing jobs, better roads, and eventual economic independence to the host countries. Much like how the Model T brought America into the modern age and stimulated the economy through accessible and affordable mobility, Thompson believed the Warrior could do the same for Third World nations.

His program was called “Project Vanguard.” The plan was to use Uniroyal plastic components – known as Royalex – because they were lightweight, durable, and relatively cost-efficient. The first phase of the plan involved building a facility where Royalex could be fabricated for use on the Warrior and other assets. The second phase would involve the building of the vehicle division (to encompass the Warrior and other future vehicles), followed by a marine division for constructing boats, and a container division where “habitat modules” would be fabricated for housing. Though Ford Motor Company was supportive when Thompson first brought his idea to the company in 1965, Ford ultimately passed on the project in 1967, believing that the vehicle would not sell in large enough quantities to warrant the investment. 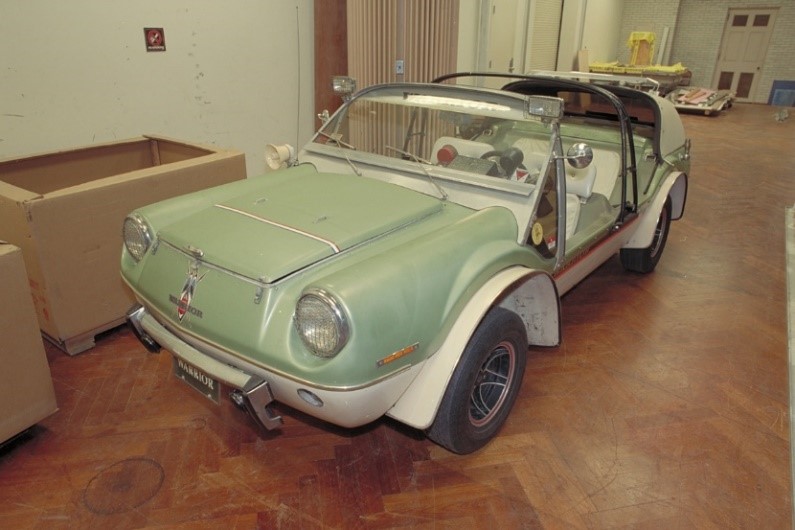 Despite this setback, Thompson still believed that his vehicle could succeed. He thought that if he produced a prototype car and could demonstrate the possibilities of this unique application of Royalex, he could garner interest for investment in the program. He gathered several friends to help in financing the Warrior prototype, including Wally Triplett – the first African American to play in the National Football League (for the Detroit Lions). By day, McKinley Thompson drafted concept drawings for Ford, but by night he worked tirelessly to bring his Warrior to life in a rented garage on Detroit’s west side. 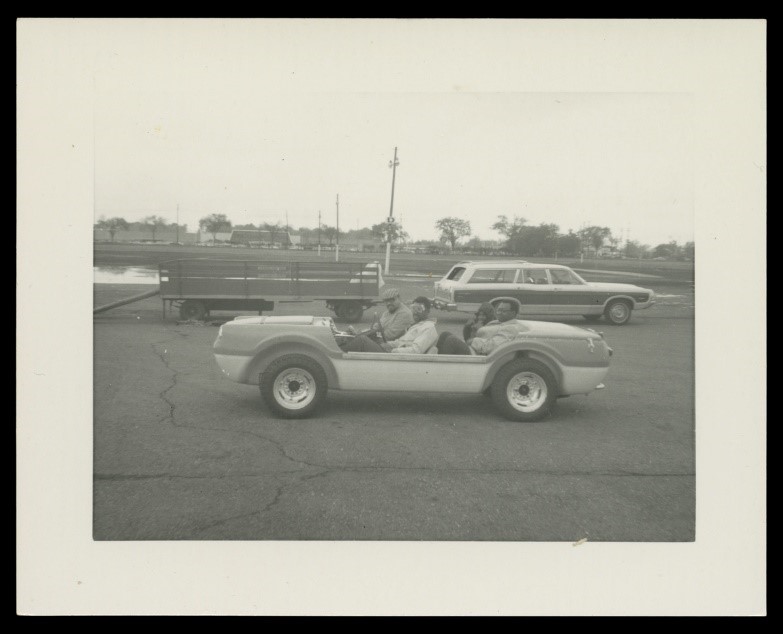 McKinley Thompson and Crew Testing the Warrior Concept Car, 1969. Click here to check out other images of the Warrior from a scrapbook compiled by Wally Triplett!  THF113754

Once his prototype was complete, Thompson and his partners attempted to market it to other investors and groups. They reached out to the Small Business Administration, which turned them down because the endeavor would take place outside the United States. They tried to gain assistance from the Agency for International Development but received little interest. A group of people at Chrysler, who assisted small businesses in getting started, suggested to Thompson that he first establish a market for Royalex in the United States. Plastic-bodied vehicles were still an unusual concept, and American automakers at the time were only experimenting with the idea on a limited scale. Thompson realized he was caught in a classic catch-22: He needed a Royalex facility to establish a market for plastic-bodied vehicles, but he couldn’t get the facility built without an existing market for plastic-bodied vehicles.

Instability on the African continent derailed opportunities to conduct business with the nations themselves. Thompson even tried to secure a bank loan to build Warrior cars in Detroit, but he was ultimately denied in this attempt as well. (Triplett later recounted that he felt that race played a role.) While every potential investor he approached told him it was a good idea, Thompson simply was unable to secure the funding needed to pursue his idea, eventually causing him to shut down the project in 1979. 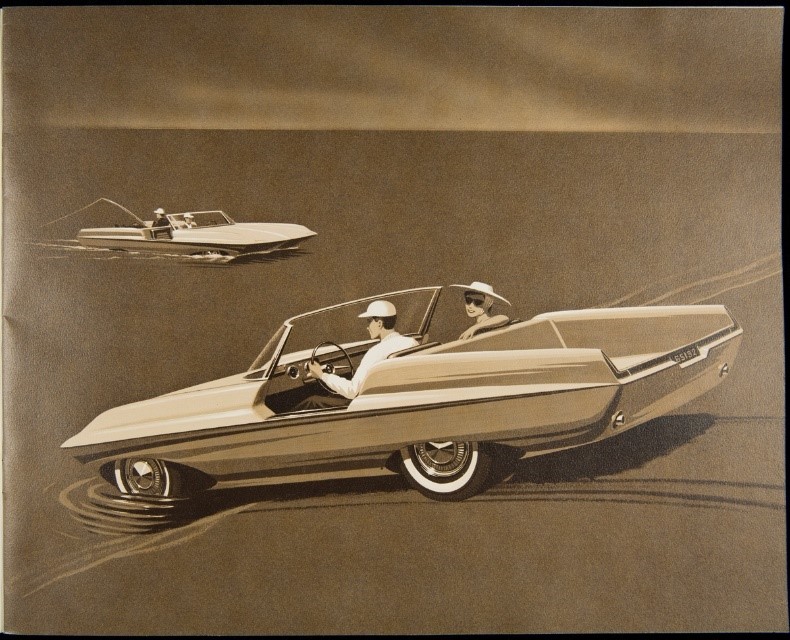 Image from a 1965 Royalex sales brochure, showing the possibilities of an amphibious vehicle using Royalex materials. Interestingly, the Warrior was designed to be an all-terrain vehicle – including use for crossing rivers and small inland lakes! Click here to check out the rest of this brochure in which Uniroyal has suggested other uses for Royalex. THF290896

An Inspiring Career
Around the same time that the doors were closing on the Warrior, Thompson developed another way to influence and change people’s lives. He coordinated a traveling exhibit, featuring the work of other African-American automobile designers, to motivate and encourage young people toward careers in design. Thompson traveled across the country, staging his exhibit in schools and shopping centers. 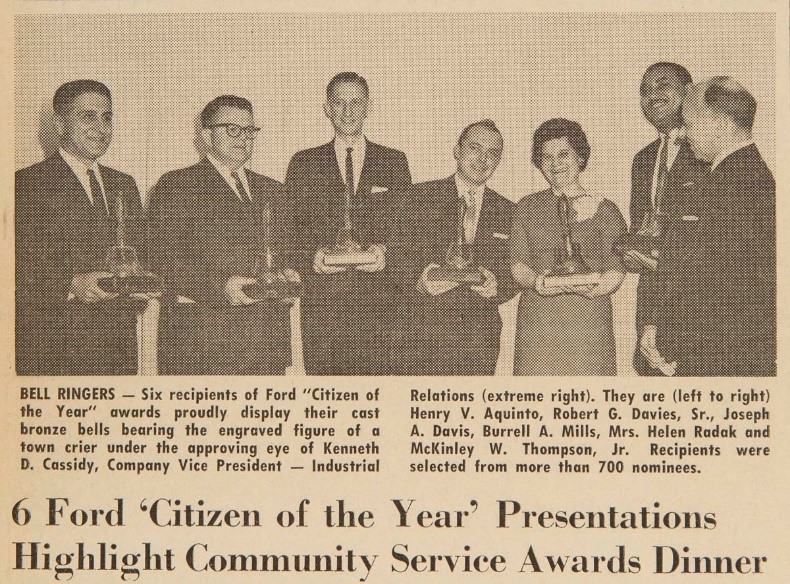 McKinley Thompson had an impressive 28-year career with Ford. In 1962 he was awarded Ford’s highest honor for community service, the Citizen of the Year Award. He contributed to a variety of projects (including experimental concept cars), worked in the Thunderbird and Falcon design studios, and eventually oversaw 50 craftspeople and modelers before retiring in 1984.

Despite his career success, Thompson continued to regret that his Warrior vehicle and overall program never materialized – though he was proud of his accomplishment in building the Warrior and proving it’s basic feasibility. The Warrior project was ahead of its time in design and philosophy. The extensive use of plastic, so common today, was revolutionary at the time. Mr. Thompson’s larger economic prophecy was partially fulfilled in 1995 when Ewert Smith’s URI, an all-terrain vehicle designed for African topography, was manufactured in the small town of Witvlei, Namibia. The URI plant became Witvlei’s largest employer, providing economic stability to the area.

Even though the Warrior never made it to market, Thompson kept the car as a leisure vehicle, taking it on family vacations and occasionally using it to run errands – usually attracting a fair amount of attention. Thompson donated his prototype to The Henry Ford in 2001.

McKinley Thompson, Jr., passed away at the age of 83, after battling Parkinson’s disease, in 2006.

Samantha Johnson is Project Curator for the William Davidson Foundation Initiative for Entrepreneurship at The Henry Ford. This post expands upon Bart Bealmear’s “The Warrior,” blog post from February 2014. Special thanks to Matt Anderson, Curator of Transportation, for his help in reviewing the content.