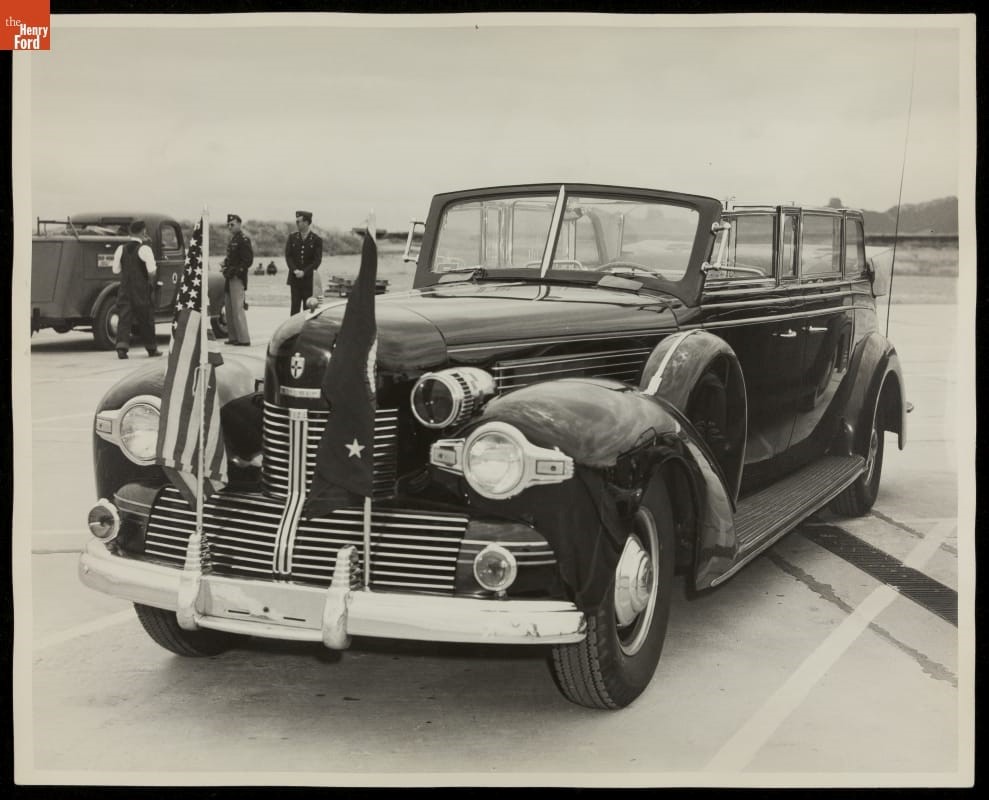 “Sunshine Special,” the 1939 Lincoln limousine modified for official use by President Franklin D. Roosevelt, as it appeared circa 1942. (THF208669)

A Unique Car Built Expressly for a President
One of the first things that a visitor notices when viewing the presidential vehicles at Henry Ford Museum of American Innovation is the size of the 1939 Lincoln K Model limousine custom built for President Franklin D. Roosevelt. The car is massive. In fact, it weighs in at over 9,300 pounds and has an impressive wheelbase of 160 inches.

Roosevelt, who was beginning the second of his four presidential terms, personally owned a 1938 Ford V-8 convertible coupe for his use at The Little White House in Warm Springs, Georgia, along with a 1936 Ford V-8 Phaeton convertible at his home in Hyde Park, New York. Both cars were equipped with special hand-operated controls so that FDR, whose paralytic illness prevented the use of his legs, could drive the cars himself.

Ford Motor Company’s Lincoln division delivered, in November 1939 and at a cost of $8,348.74, a current model K series chassis, to the Buffalo, New York, coachworks firm of Brunn & Company. There the four-door convertible, equipped with a 150-horsepower 414-cubic inch V-12, was further modified to meet U.S. Secret Service requirements. Brunn’s modifications added another $4,950 to the limo’s total cost.

The car was built with forward-facing jump seats, wider opening rear doors, reinforced extra-depth running boards and a pair of step plates above the rear bumper. It had strategically-placed handles for the Secret Service agents, as well as a Federal Electric Company police red light and siren combination with dual driving lamps and flag staff holders on the front. Another feature was that the roof was made extra tall so that the President, who had limited mobility and used a wheelchair, could enter and exit the car without difficulty.

Although coachbuilder Herman A. Brunn, owner of Brunn & Company, thought the car looked terrible with that extra tall top, the limo was finished and sent to Washington as ordered. In the end, it seems Mr. Brunn was right. According to Ford Motor Company internal memoranda and telegram communications, the car was returned to Brunn & Company’s Buffalo plant in the summer of 1941 to have its top replaced with one of standard height. Global events forced even more significant changes to the limo that December. 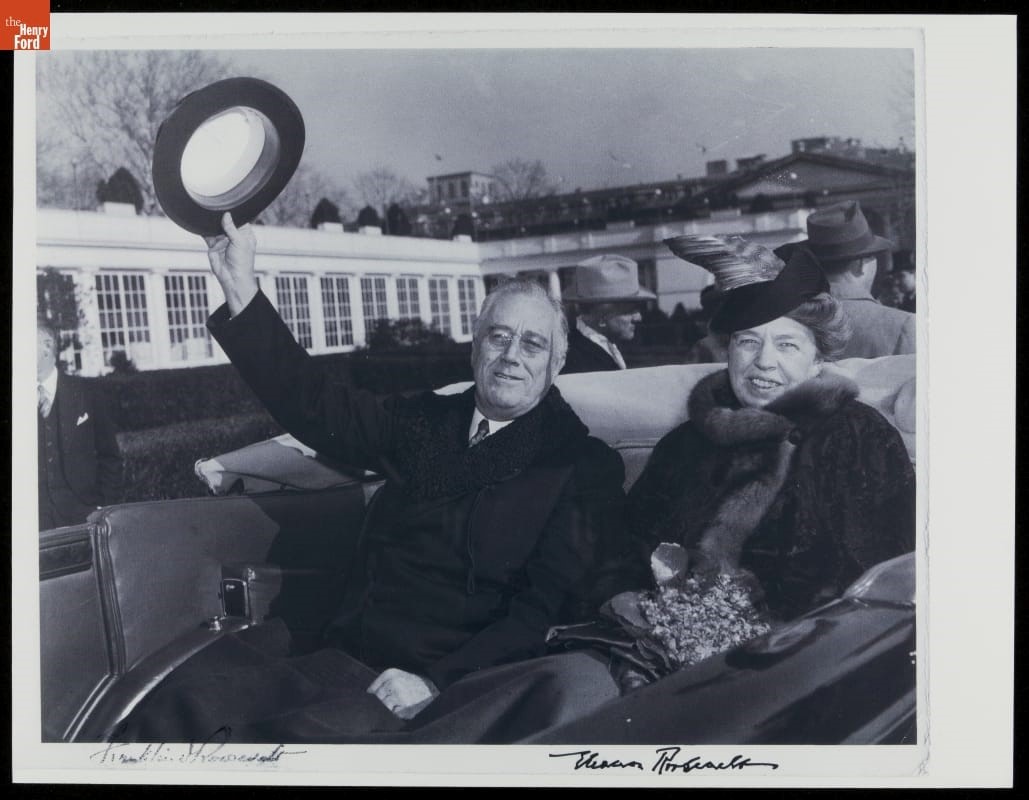 President Roosevelt preferred open cars whenever the weather permitted – and sometimes when it didn’t. (THF208655)

The First Presidential Car to Acquire Its Own Personality
Within a few weeks after the December 7, 1941, attack on Pearl Harbor, the White House Garage delivered the 1939 Lincoln K series limousine to Ford Motor Company’s plant in Alexandria, Virginia, on the waterfront across the Potomac River from Washington D.C. The car was shipped to the Lincoln plant on West Warren Avenue in Detroit and, upon its arrival, Lincoln workers began to disassemble the limousine, readying its wartime armor and additional modifications requested by the Secret Service.

Workers removed the Brunn body and altered the car’s chassis. Its suspension was beefed up with heavy-duty shock absorbers and additional leaves in the springs – to handle the added weight of armor plating and thick bullet-resistant glass. Likewise, a modified windshield frame was installed to accommodate the thicker windshield glass. When the Brunn body was reinstalled, it received a new 1942 model H series Lincoln front end clip (fenders, grill, and front nose cap piece), which gave the car a crisp, more modern look.

A more powerful generator was installed, with new wiring harnesses. Cooling was improved by making the radiator tank top an inch thicker, adding three-and-one-half inches more to the core than was standard, and a larger fan was put in for additional engine cooling capacity. The cowling also had wider side vents installed to let more of the engine’s heat escape.

The whitewall bias-ply tires were replaced with the first generation of what are now referred to as “run flat tires,” which enabled the big limousine to continue to travel a short distance to safety if the tires were shot out. The two spare tires were put into reworked special front fender wells, in painted metal tire covers that didn’t need to be bolted into place and allowed for rapid tire changes.

A bullet-resistant divider was installed between the front and rear seats. It included fold out bullet-resistant side glass screens for use when the convertible top was down. Another bullet-resistant screen could be added behind the rear seat when the top was lowered, and then stored in the trunk when not in use. When the door windows were down, a spring-loaded flap covered the slot in the top of the door to stop things from falling inside and jamming the windows.

When the Lincoln originally was delivered in 1940, it was painted a dark midnight blue with russet trim. Now the car was repainted in black, with chrome trim and brightwork. The rear step plates, grab handles, and wider running boards were reinstalled after the repainting was finished.

Detroit plant workers also added new running/fog lights to the front bumper, along with flag staff holders. The Federal Electric Company police red light and siren were reinstalled on the left front fender. By the end of the second week of April 1942, the car was ready to ship back to the Alexandria plant for delivery to the White House Garage where it could resume its presidential duties.

At an unknown time after the car’s 1942 retrofitting, an unidentified member of the White House Press Corps gave the limo the sobriquet it retains today: “Sunshine Special.” Although the exact reason for the nickname is lost to history, it may have been due to FDR’s well-known love of riding with the top down – sometimes even when the weather recommended against it. 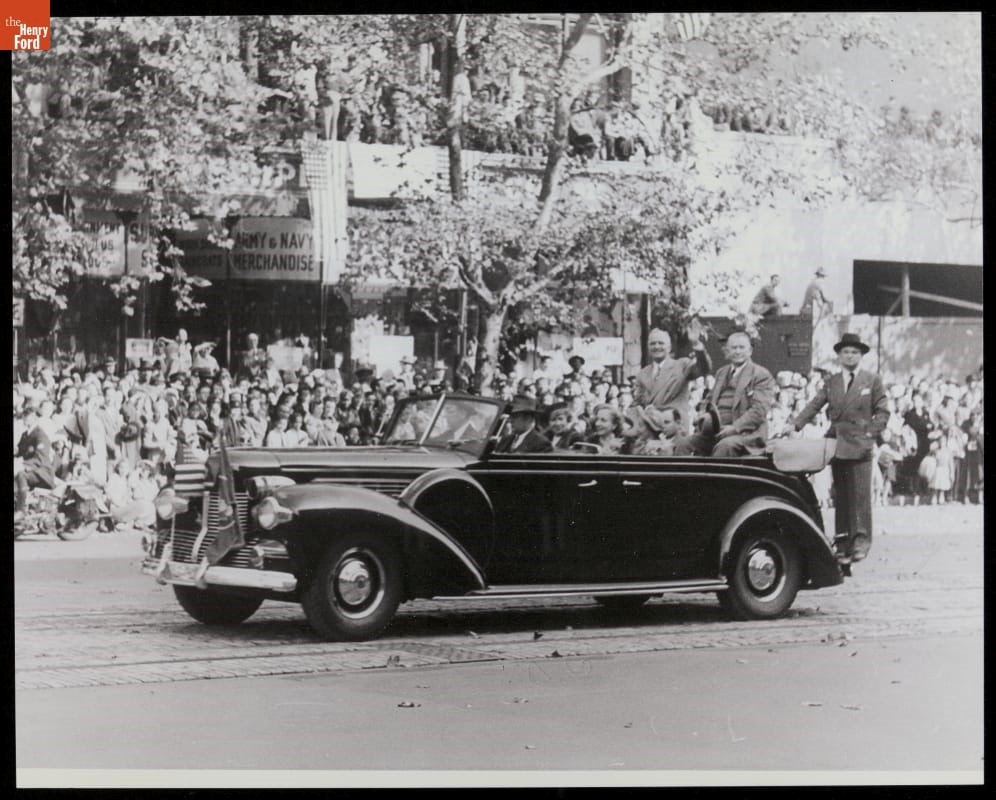 Sunset for “Sunshine Special”
Following FDR’s death on April 12, 1945, “Sunshine Special” served his successor, Harry S. Truman, for another five years. The White House put out bids for a new presidential limousine in the spring of 1949 and, that summer, officials met with representatives from Ford Motor Company to discuss the contract. This would be the largest single order ever placed for the White House fleet.

In the early summer of 1950, nine custom-built enclosed 1950 model Lincoln Cosmopolitan limousines, produced by the Henney Motor Company of Freeport, Illinois, were delivered to the White House Garage. A matching four-door Lincoln Cosmopolitan convertible-bodied limousine, modified at the Grand Rapids, Michigan, shop of master coachbuilder Raymond Dietrich, was also delivered. The Dietrich seven-passenger Lincoln was fitted with a Hydramatic automatic transmission purchased from General Motors and then modified to mate with the 337 cubic-inch V-8 engine. Per the order’s specifications, none of the limousines were armored.

Upon delivery of the fleet of Lincoln Cosmopolitan limousines, older White House Garage vehicles were shipped back to their manufacturers or sold off. “Sunshine Special” was returned to Lincoln and subsequently donated to The Henry Ford.