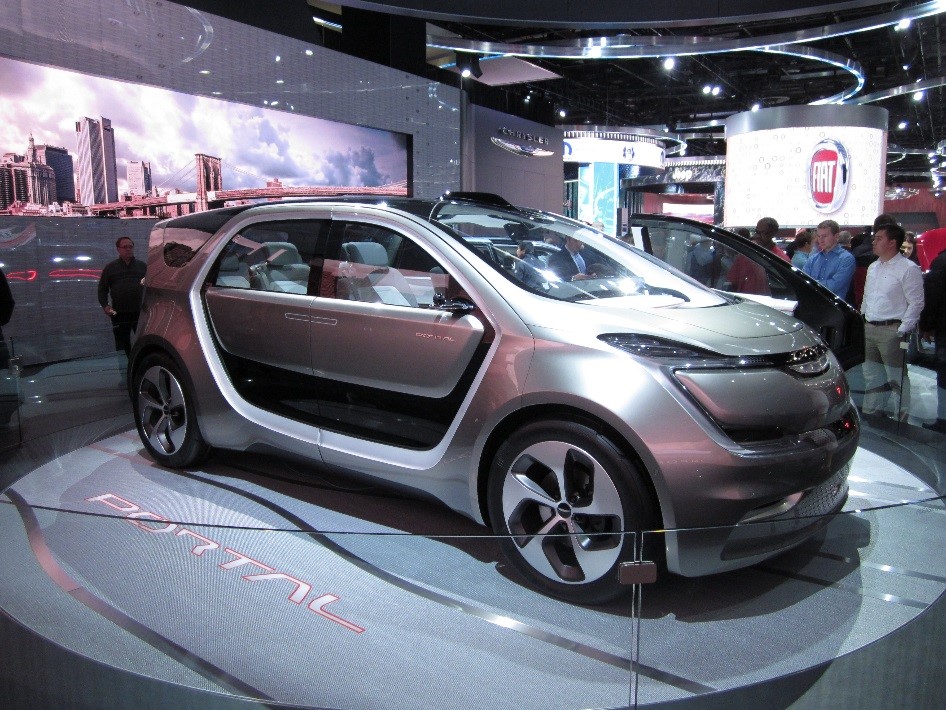 Chrysler’s Portal concept car. The company that invented the minivan now reimagines it.

It’s that time of year again, when the North American International Auto Show (NAIAS) brings the world’s largest automobile manufacturers to Detroit to tempt us with their upcoming models – and tease us with a few dreamy concepts. As usual, the show does not disappoint. Autonomous concept cars, compact crossovers and alternative fuels are all prominent at this year’s event. 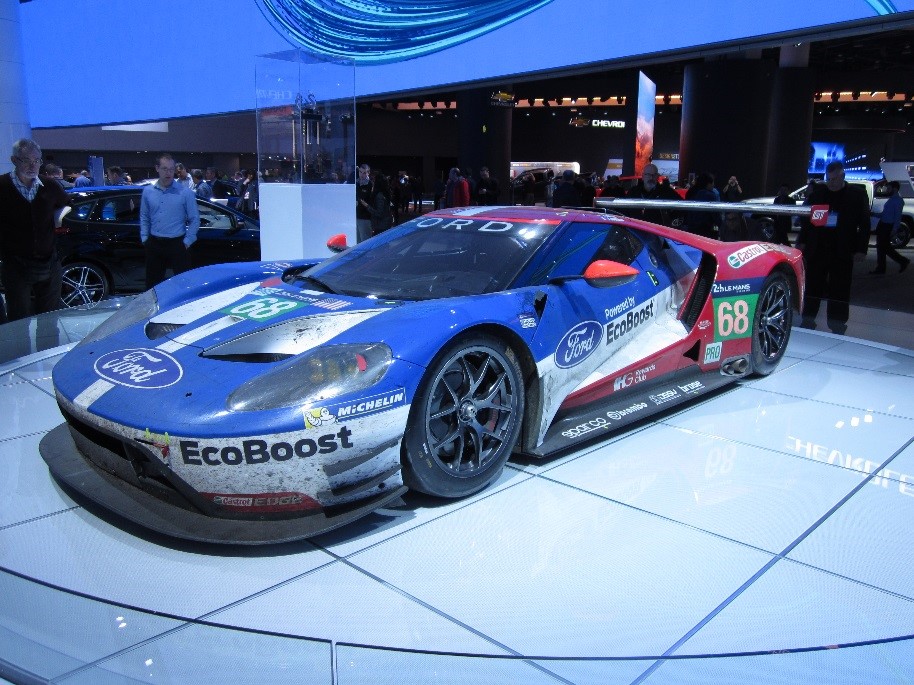 Ford is rightfully proud of its big win in the GTE-Pro class at the 2016 Le Mans 24-hour race. Not surprisingly, the #68 GT piloted to victory by Sebastien Bourdais, Joey Hand and Dirk Muller is front and center at the company’s booth. What is pleasantly surprising, though, is that the Blue Oval resisted the urge to clean up the car and instead is displaying it in all of its battle-scarred glory. The GT wears that dirt and grime like a badge of honor. 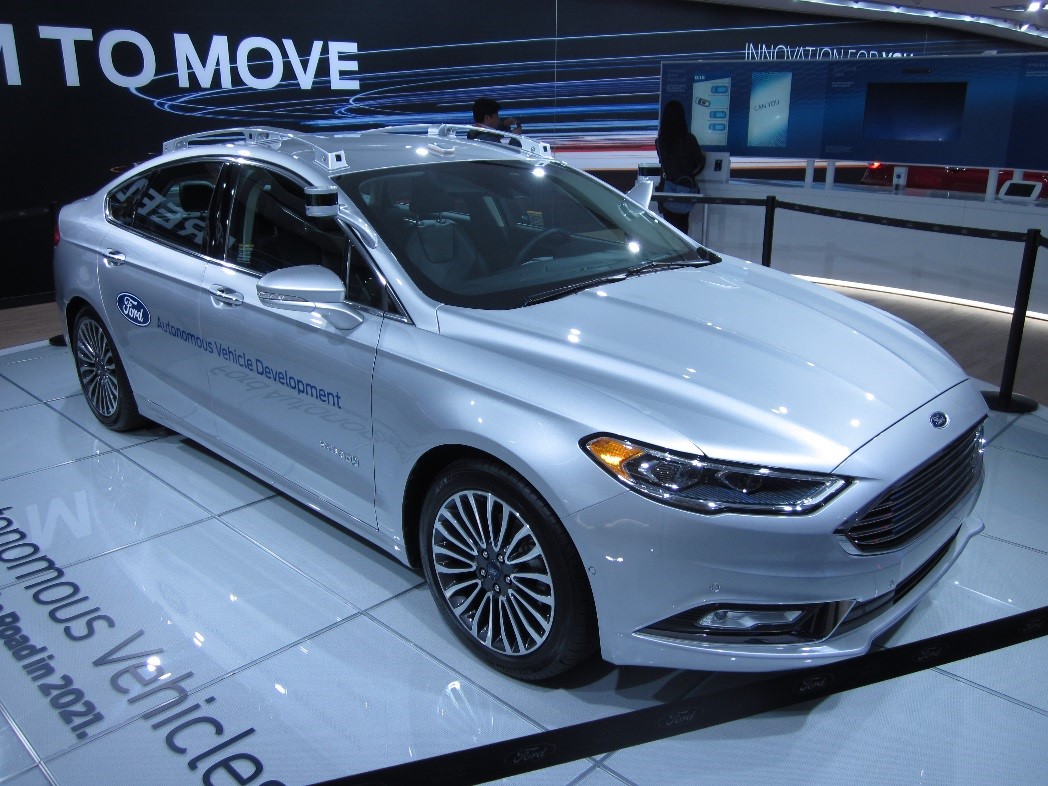 Ford’s autonomous Fusion Hybrid. The company promises a fully autonomous car for public use in 2021.

Ford has made headlines recently with its plan to reposition itself as a mobility company rather than a carmaker. Head to the back of the firm’s NAIAS space and you’ll see that it’s more than mere talk. There’s a Go Bike from Ford’s bicycle sharing program in San Francisco, and a mention of the Chariot ride-sharing service the company purchased there in 2016. The real highlight for me, though, was the autonomous Fusion Hybrid. Apart from a pair of LIDAR units mounted above the side-view mirrors, most of the car’s sensors are hidden in what could pass for a luggage rack. Ford promises a fully autonomous vehicle in ride-sharing service in 2021. It seems the car won’t look all that different from anything else on the road. (While those LIDAR units are fairly discreet, I’m holding out for the inevitable autonomous car with an infrared scanner.) 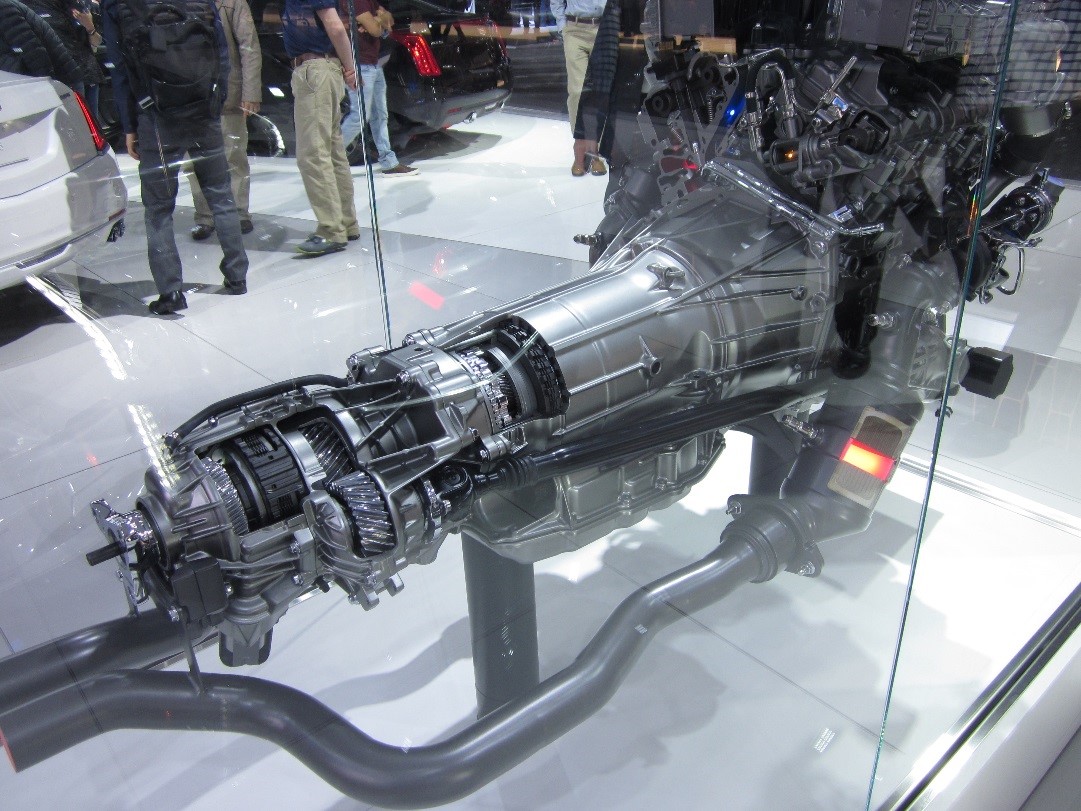 I always love the cutaways, like this V-6 from the all-wheel drive Cadillac CT6. Note the black driveshaft, running alongside the gearbox and bell housing, which sends power to the front wheels. 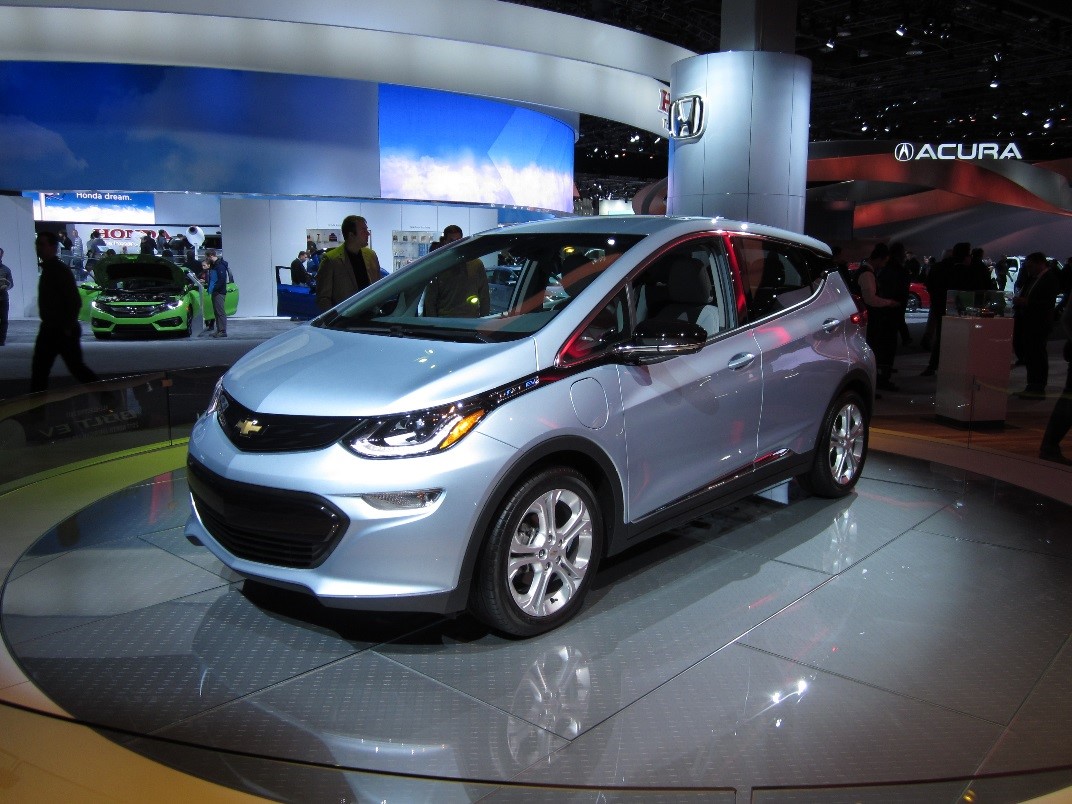 Chevrolet Bolt, the 2017 North American Car of the Year.

General Motors has its own reason to crow. The Chevrolet Bolt takes honors as 2017’s North American Car of the Year. Chevy promises 90 miles of range with a 30-minute charge, certainly impressive in the EV category. And the Bolt’s 0-60 m.p.h. time of 6.5 seconds may not be Tesla-type ludicrous, but it’s a full second faster than many of its gas-powered subcompact competitors. And speaking of unconventional fuels, the General’s GMC Terrain crossover gets an optional diesel engine for 2018. GM hasn’t always had the best of luck with diesels, but the fuel efficient 1.6-liter engine could make Terrain buyers happy at the pump. 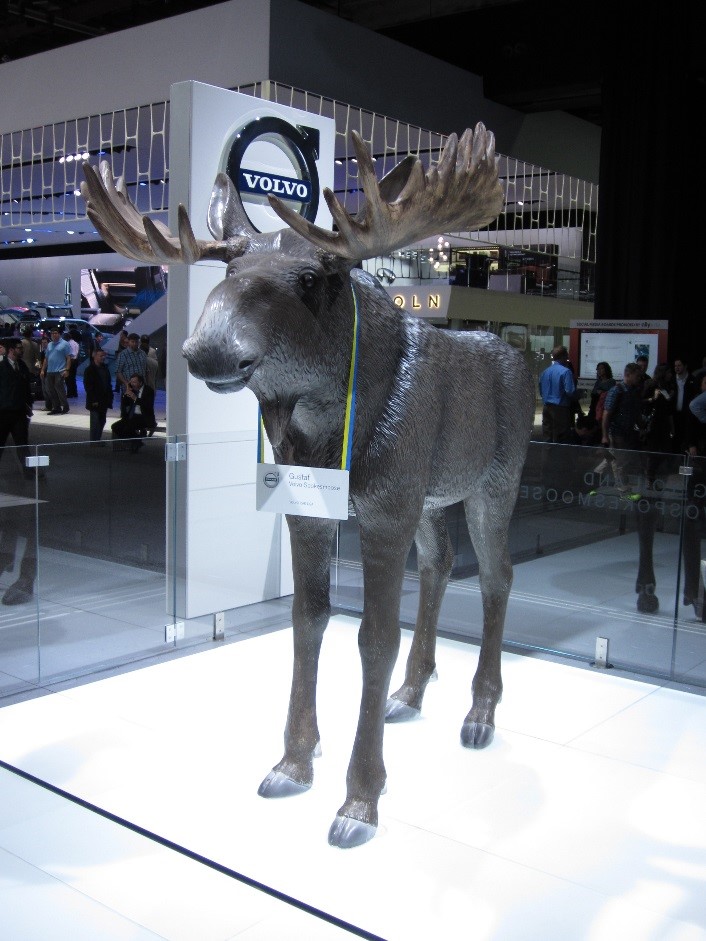 Gustaf, the Volvo Spokesmoose. He’s there to promote the Swedish carmaker’s large animal detection system – and to provide a fun photo opportunity. 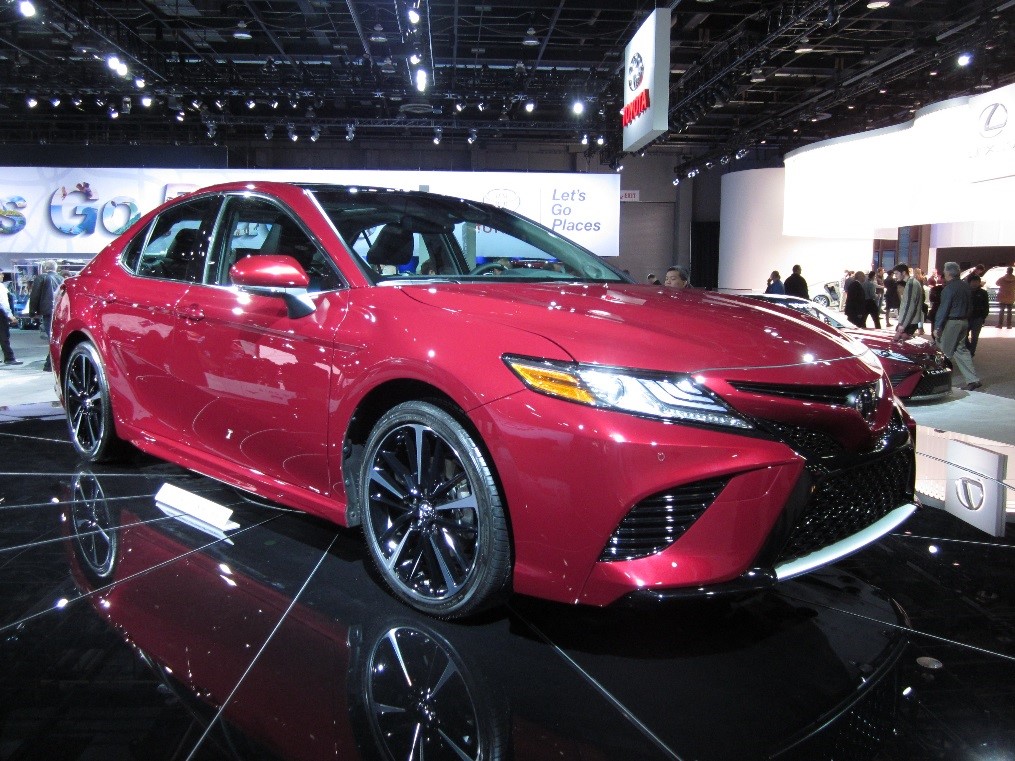 The 2018 Toyota Camry gets an aggressive look to match its aggressive sales.

Toyota always mounts an impressive display at NAIAS, and this year is no exception. The company’s big surprise is a robust facelift to its perennially best-selling Camry. The 2018 model gets an angular, aggressive front end wholly unexpected on a sedan that’s practically synonymous with, well, “practical.” They say you should never mess with success, but you don’t become the world’s largest automaker by taking blind risks. I’m sure the focus groups loved the redesign. Besides, it’ll look great at Daytona. 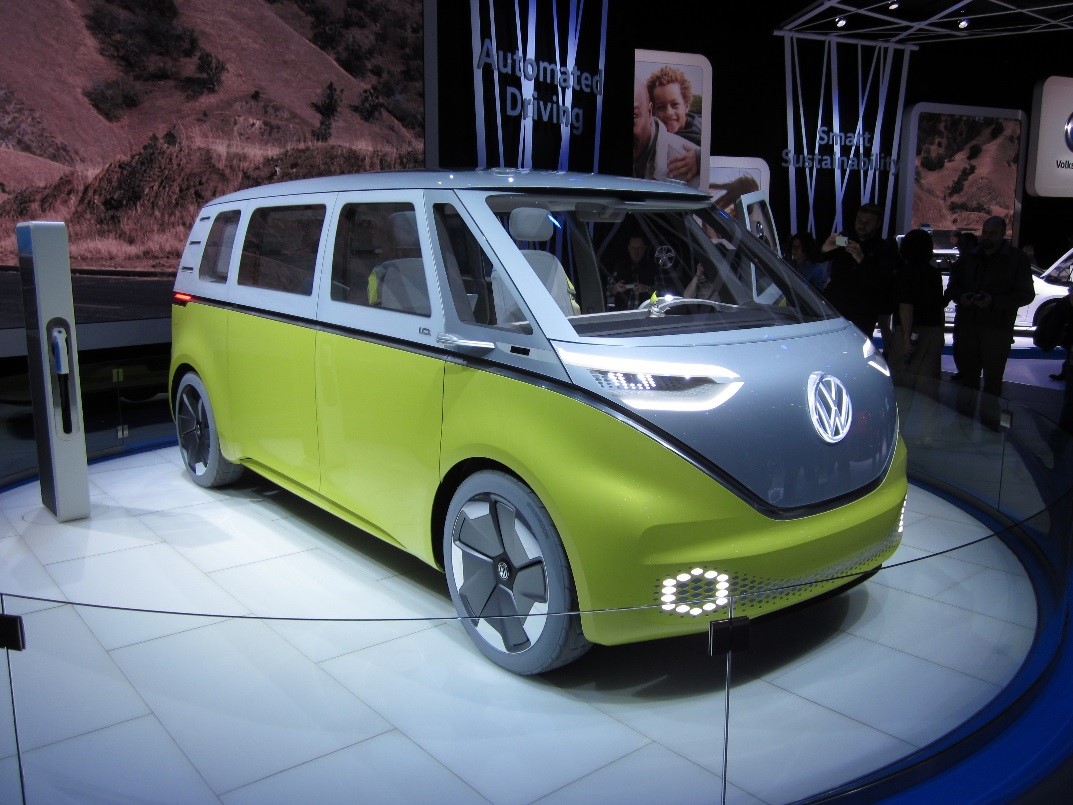 Volkswagen’s I.D. Buzz autonomous van. Think how many more mysteries Scooby and the gang could solve if Fred didn’t have to worry about driving.

Thanks to its diesel shenanigans, Volkswagen had a rough year, but you wouldn’t know it looking at the German manufacturer’s NAIAS booth. They’ve brought what might be the most eye-catching concept vehicle at Cobo Center. The I.D. Buzz is a cheery homage to the classic Microbus, but the hippies have gone high-tech. The Buzz is all-electric – and intended to be fully autonomous. As envisioned, the van gives owners the best of both worlds with a standard manual mode that can be switched over to automatic whenever the driver needs a break. 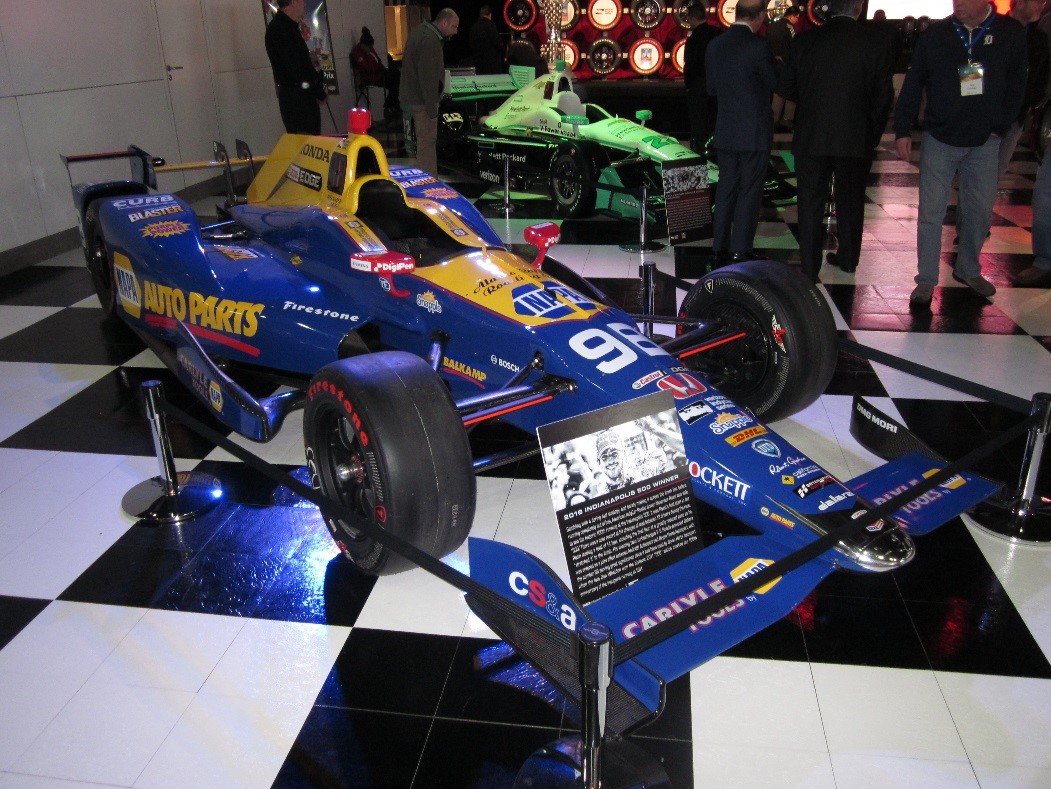 Presumably, the gas tank on this one is empty while it’s in Cobo Center – just like it was when Alexander Rossi coasted across the finish line in first place at last year’s Indianapolis 500. 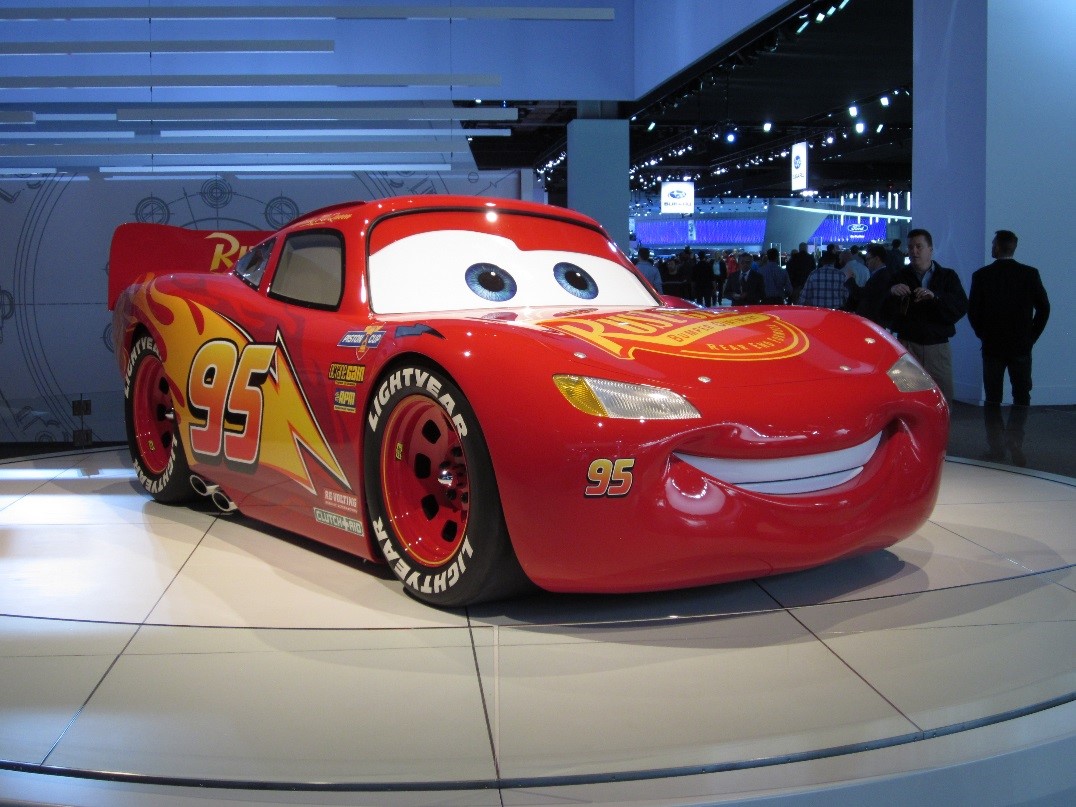 Another notable race car, the 2006 Rust-eze Special. Sure to be a hit with the toddler set.

While I could have spent the whole day wandering through the main hall, I’m glad I saved some time for the lower level. From January 8-12, the space hosted “AutoMobili-D,”a dedicated exhibition focused on autonomous vehicle research, urban mobility, and a number of techy startup companies. Of particular note was the booth devoted to the University of Michigan’s Mcity autonomous vehicle test facility. That Ann Arbor track, together with the American Center for Mobility at Willow Run, enables Michigan to hold its own against the tech titans of Silicon Valley, who threaten to take away the Great Lake State’s mantle of automobile R&D leadership. 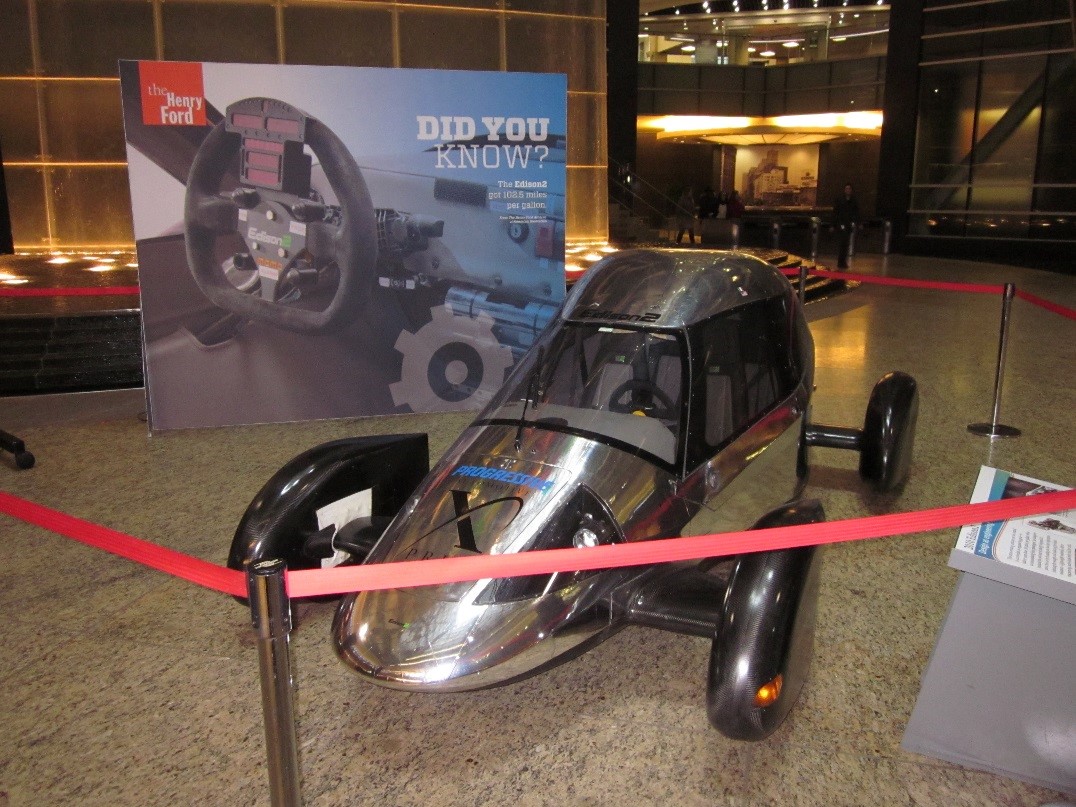 The Henry Ford’s 2010 Edison2, on view in Campus Martius.

If your visit to NAIAS takes you through Campus Martius, you might take a moment to peek in the lobby of the One Campus Martius building. There you’ll find our own Edison2 concept car, winner of the 2010 Progressive Automotive X Prize. The gasoline-powered vehicle, which weighs all of 830 pounds, got more than 100 miles per gallon during the competition. What with all of the folks from around the globe in Detroit this week, we thought we might tempt them to visit us in Dearborn. What better break from the cars of today and tomorrow than a look at the innovative automobiles of yesterday?