Shopping at an 1880s General Store 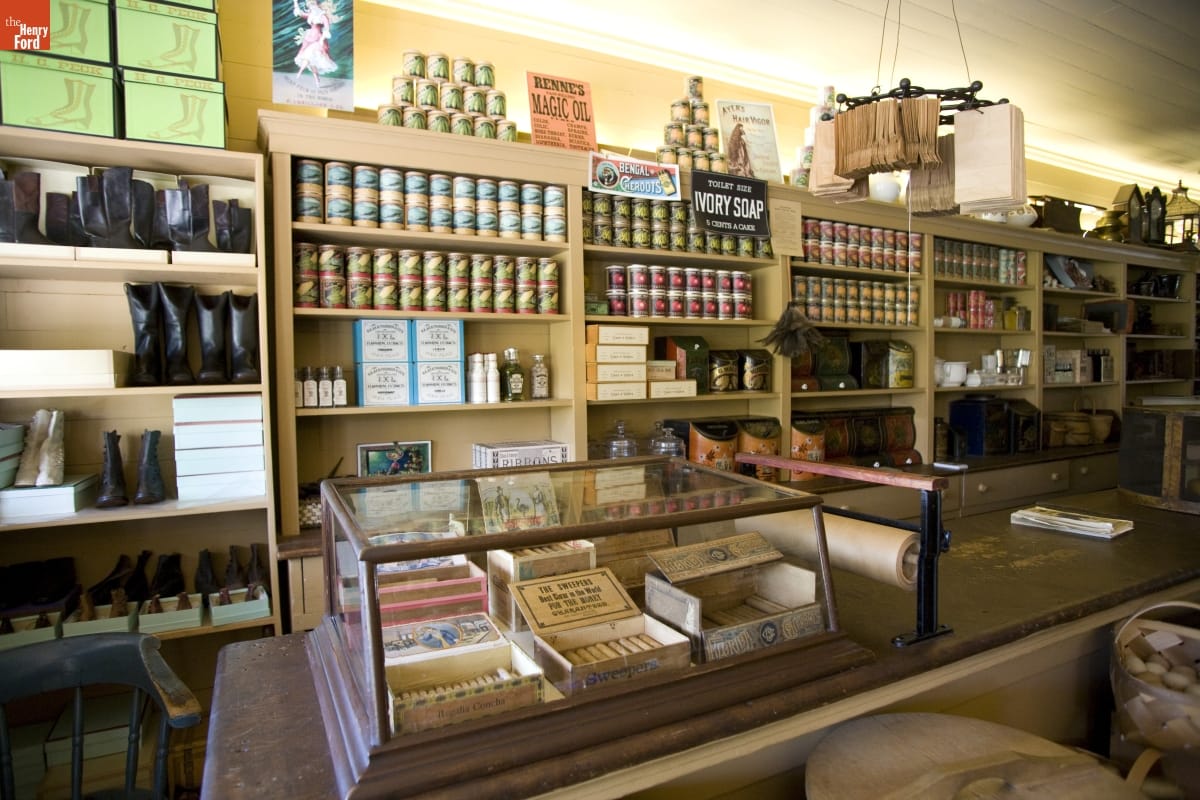 Left side of J.R. Jones General Store featuring large grocery “department” and a cigar case on the counter up front. (THF53774)

During the 1880s, proprietor James R. Jones would have welcomed customers to this general merchandise store—now in Greenfield Village but originally located in the rural village of Waterford, Michigan.  Jones sold everything here that townspeople, local farm families, or visiting out-of-towners might want—from groceries to fabrics to farm tools to fishing poles.  The store also served as a community gathering place, for customers to exchange news, socialize, and pick up mail.

Choices between similar products even in country stores like this one were quite plentiful.  Decisions by shoppers depended upon such things as their family background, gender, financial means, and personal values.

Here’s a sampling of some of the products that 1880s customers to the J.R. Jones store might have purchased. 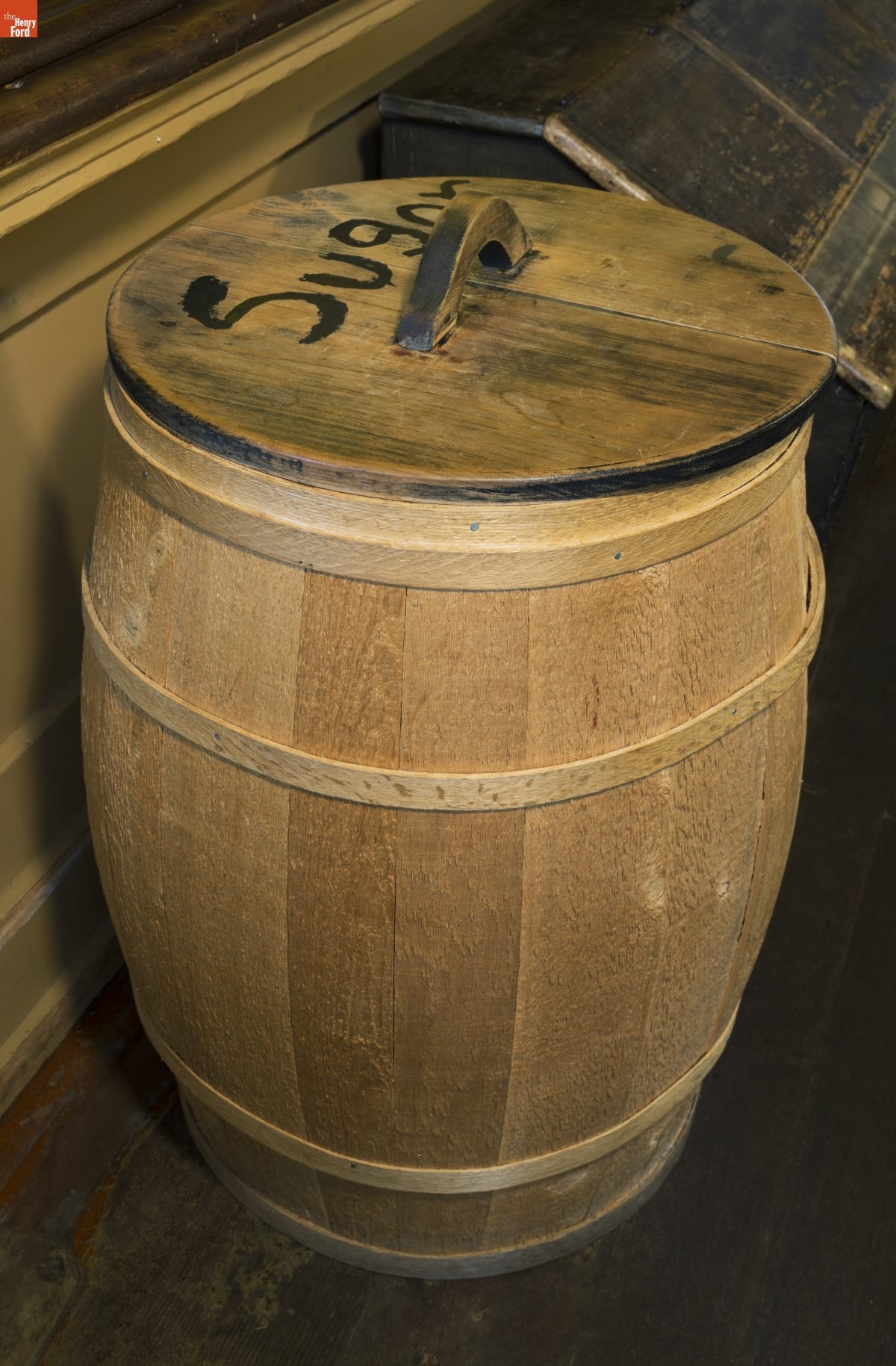 In a study of general store accounts from the era, customers purchased sugar more often than any other single product. It was, of course, used in cooking and baking, but large quantities of it were necessary for preserving fresh seasonal produce in the days before refrigeration. 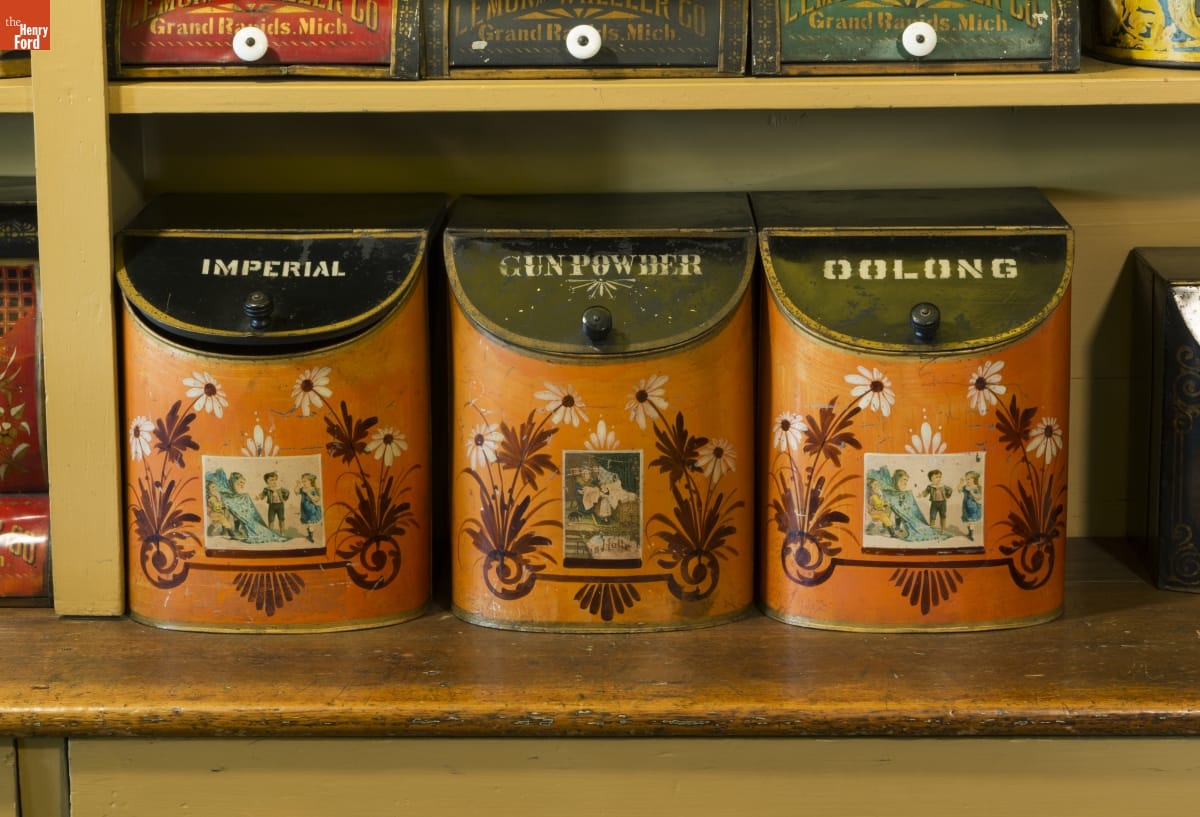 The Grocer’s Companion (1884) called tea the “foremost of all beverages in reference to its invigorating and restorative qualities.” Tea came in a tremendous variety of grades and types in the late 19th century, and store canisters were often specifically designed to hold the various types. They came from only one species of evergreen shrub or small tree. The differences came in how the tea was grown and how the leaves were treated.  All the tea in the J.R. Jones General Store came from China, which was considered the center of the tea industry at the time. This included: 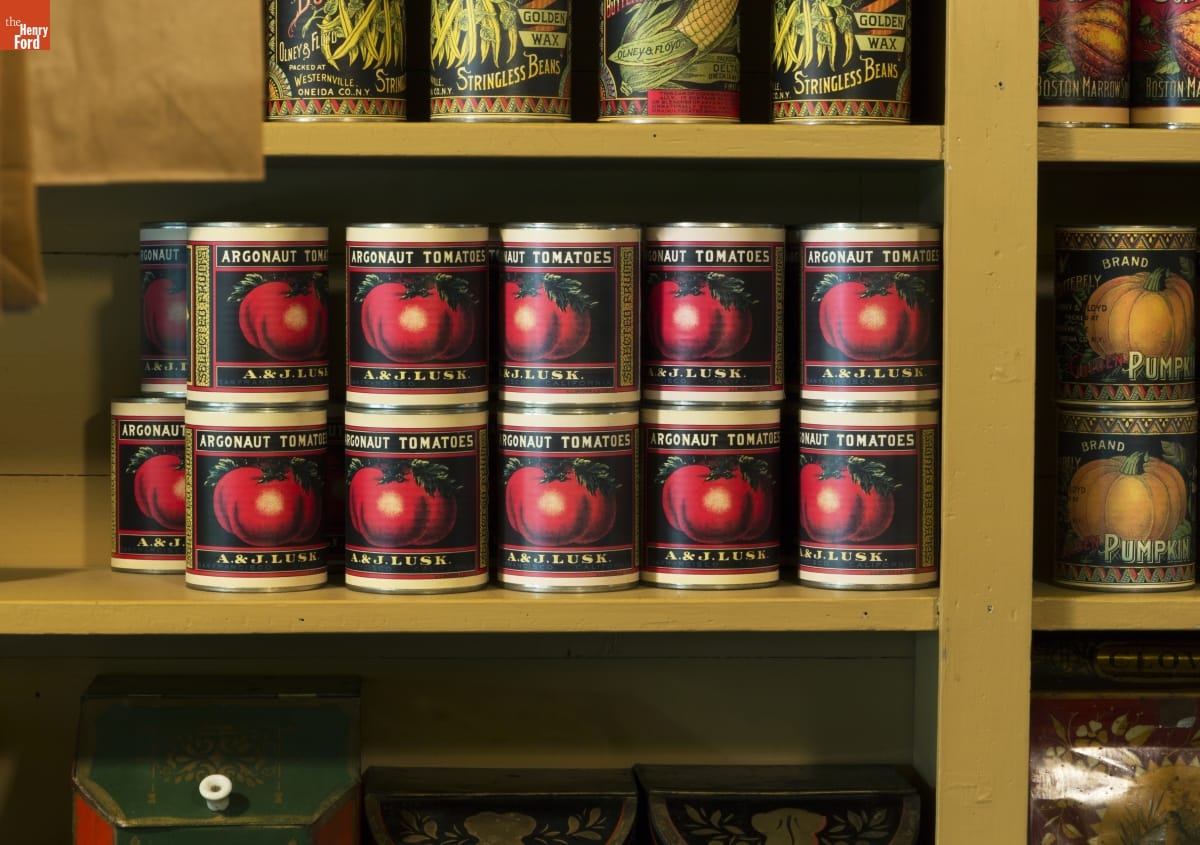 Tomatoes were one of the most popular commercially available canned food products.  By the 1880s, improved manufacturing techniques in canning had raised the production of canned goods to a major American industry, making all manner of fruits, vegetables, and meats available year-round to just about everyone but the very poor.

Canned goods, however, had many critics. Some claimed that the food tasted “tinny,” that it was unhealthy, and that products were adulterated to add weight (this was before the Pure Food & Drug Act of 1906). In some cases, women also could be looked down upon for relying on canned goods rather than canning and preserving themselves.  Nevertheless, the presence of canned goods in store accounts and advertisements attests to their popularity. 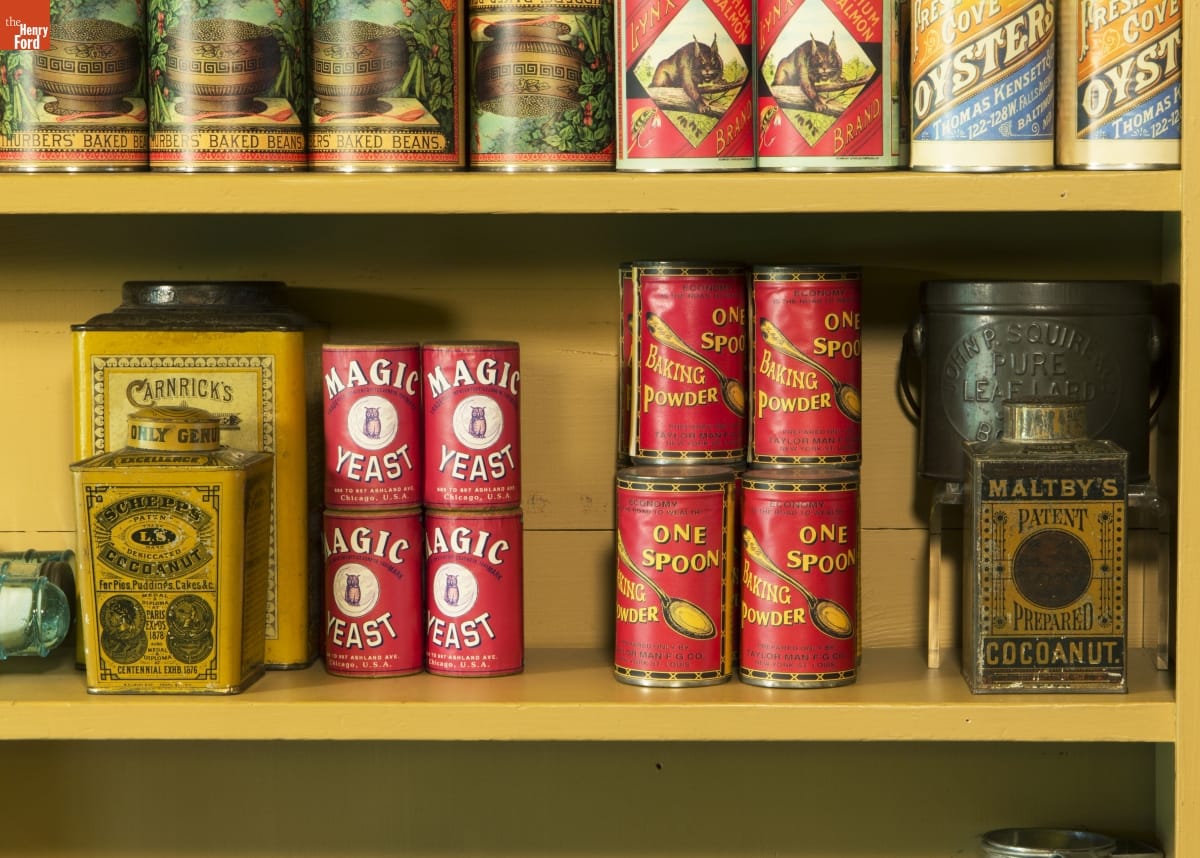 Packages of Magic Yeast and One Spoon Baking Powder (THF176670)

Despite the introduction of several different brands of baking powder during this time, yeast still remained the most popular bread-leavening agent. Many women made their own yeast and numerous recipes appeared in cookbooks. As for the commercially processed product, compressed yeast introduced by Gaff, Fleischman & Company in the 1860s, was considered the purest and most dependable form of yeast.

But many brands of packaged yeast cakes and powders, including this Magic Yeast, vied for competition in the market. Critics of these commercial yeast products claimed that their vitality could be easily destroyed by heat, cold or movement, and that they could make bread sour or moldy.  Still, they were much more convenient than the homemade.

Baking powder, a leavening agent usually made from a proportion of cream of tartar and carbonate of soda, was fairly new on the scene in the 1880s. It saved careful measuring of one or both of these ingredients in baked goods, and saved hours of time over yeast in making bread. Dozens of baking powders, like this One Spoon brand, were available on the market.

But baking powder, more than just about any other cooking ingredient of the late 19th century, raised suspicion and complaints among housekeepers and advice writers alike.  High cost, poor performance, and leaving a bitter taste in foods comprised some of these complaints. But even more alarm was raised by accusations of adulteration—that is, the addition of impure ingredients like lime, earth, or alum, which could actually injure people’s health. Fortunately, most of these problems were worked out in the next decade or so, when the advent of “quick breads” really began. It was the adventurous housewife that tried baking powder in the 1880s. 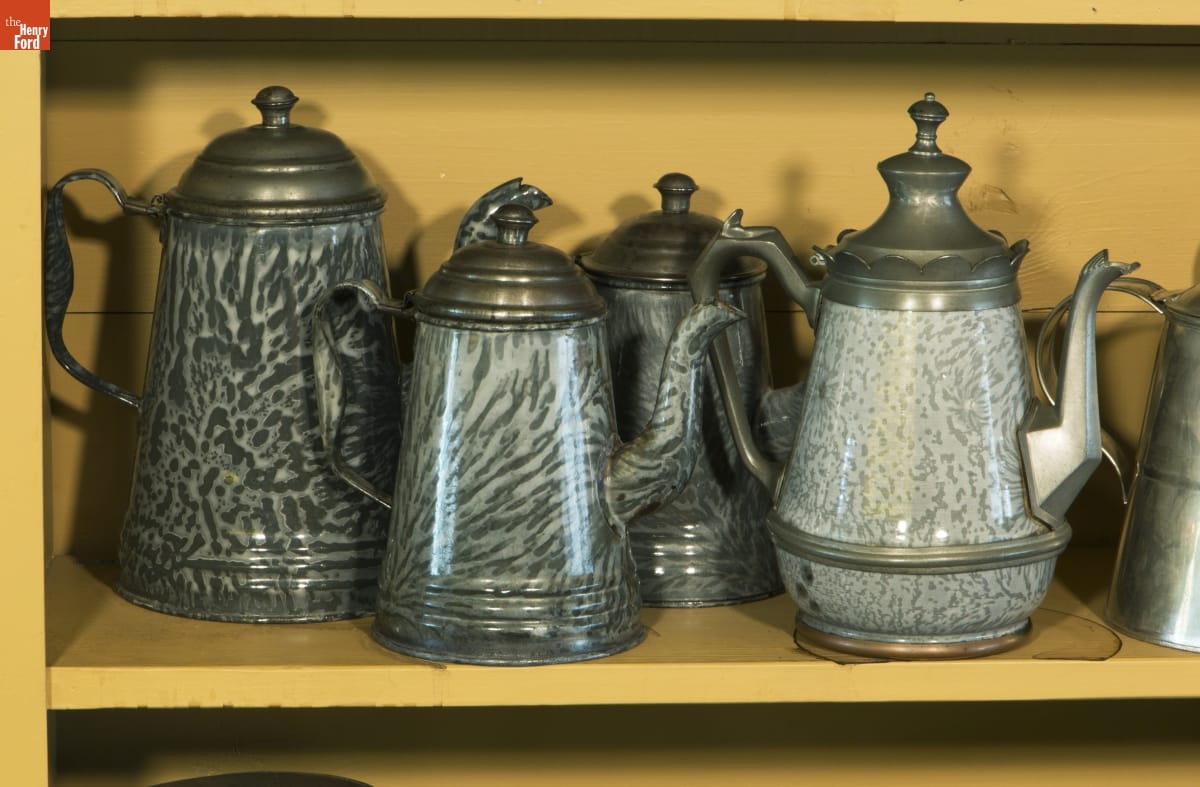 When enamel-coated ironware was introduced in 1874, it was marketed as light (compared to cast iron), handsome (the gray mottled surface was considered picturesque and elegant), wholesome (wouldn’t rust or corrode like tinware and didn’t contain poisonous arsenic, lead, or antimony like cheap imitations), and durable (actually, it chipped easily but 3 out of 4 points in its favor weren’t bad!). Manufacturers of this so-called granite ironware, or graniteware (because of its visual appearance like granite), optimistically claimed that these goods would entirely supplant the “common and unserviceable” stamped tinware. (Actually, it was aluminum that did this in the early 20th century.)  In the 1890s, enamel-coated steel replaced much of the earlier granite ironware.

Coffee, as an accompaniment to breakfast and other meals, was an extremely popular beverage at this time. The most common way of preparing it was in an open boiler on a cookstove. 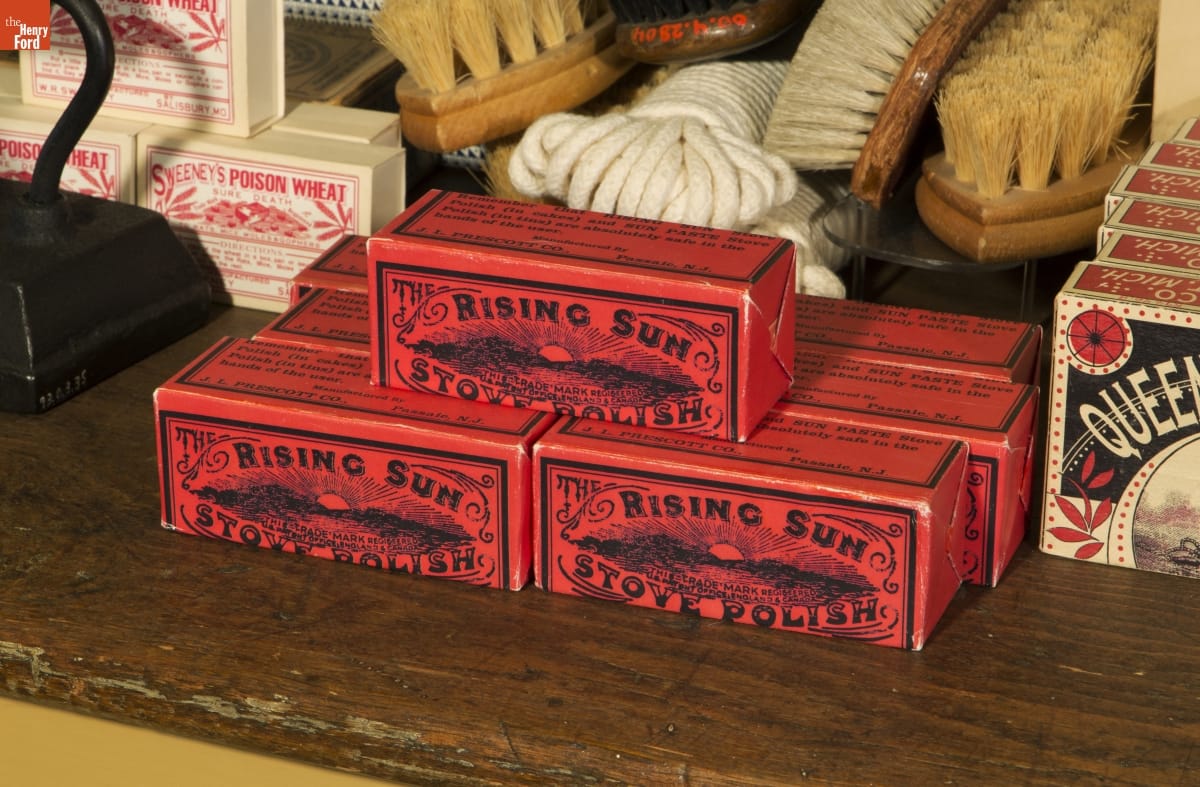 This product would have been used in conjunction with blacking to clean and give luster to cast-iron stoves. It was mixed with a liquid agent (e.g., turpentine or soap-suds) for application to the stove. This was a crucial task for cleaning cast-iron stoves, but it was also marketed as necessary to maintaining a tasteful home. Rising Sun Stove Polish was very aggressive in its marketing. Advertisements boasted that it was “the oldest and most reliable stove polish in the world” and that it would “keep stoves looking good and operating efficiently.” 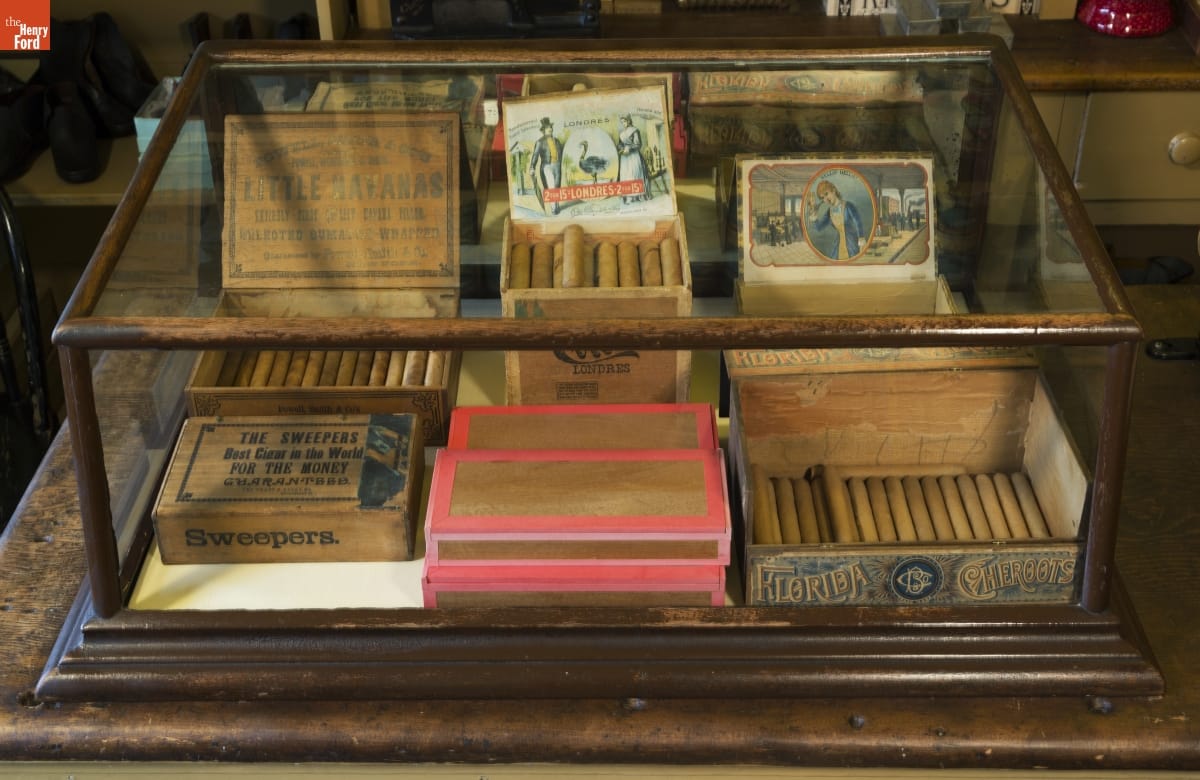 During the 1880s, cigar-smoking was extremely popular, especially among men who wanted to appear prosperous and ambitious. Unlike smoking tobacco (for pipes) and plugs of chewing tobacco, where production was monopolized by a few large national manufacturers, cigars were still produced at thousands of small, local manufactories across the country as well as in Havana, Cuba. Detroit had several cigar factories. As a result of this great number of producers, cigars came in a daunting array of sizes, colors, grades, and flavors. To the uninitiated, sometimes only the eye-catching images on their boxes in the store’s showcase distinguished one brand from another. 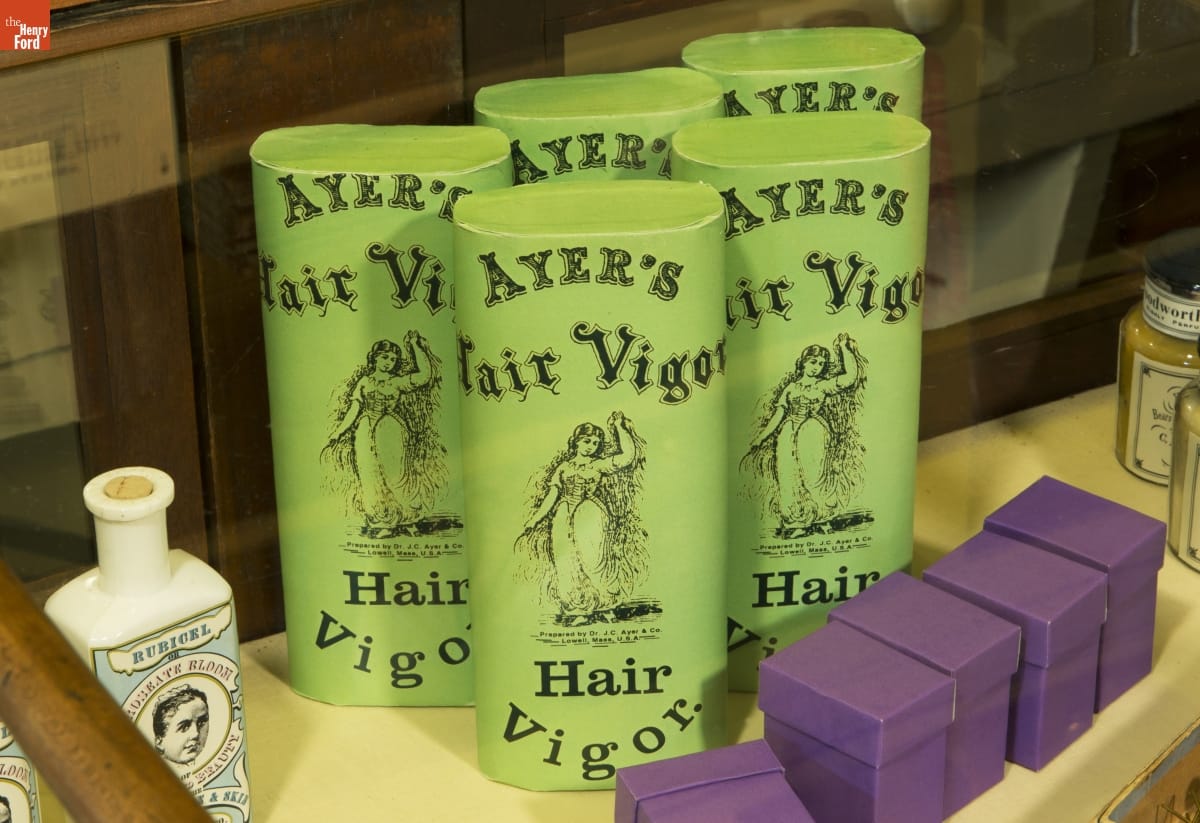 The hairstyles of the 1880s required an abundant supply of healthy hair in order to make it stand up as high and look as natural as possible. Hair dressings and restorers abounded, with Ayer’s Hair Vigor among the best known.

This product claimed to promote hair growth, restore color and vitality to faded or gray hair, and render the hair soft, youthful, and glossy. It contained cream of tartar (removed the reddish color in hair caused by rust from iron-rich well water); glycerin (a moisturizer); lead acetate (which claimed to remove the gray hair); and a caustic soda (a.k.a. sodium hydroxide or lye), which claimed to be a hair relaxer or straightener. The colorful images of young women with long, luxurious hair on Ayer’s trade cards and packages must have encouraged older women to try this product as well.

Medical journals attacked Ayer’s Hair Vigor as unsafe and denounced its manufacturer as deceiving the public. But the product’s allure persisted, and certainly J.R. Jones and his customers would have been unaware of any safety warnings from such journals. 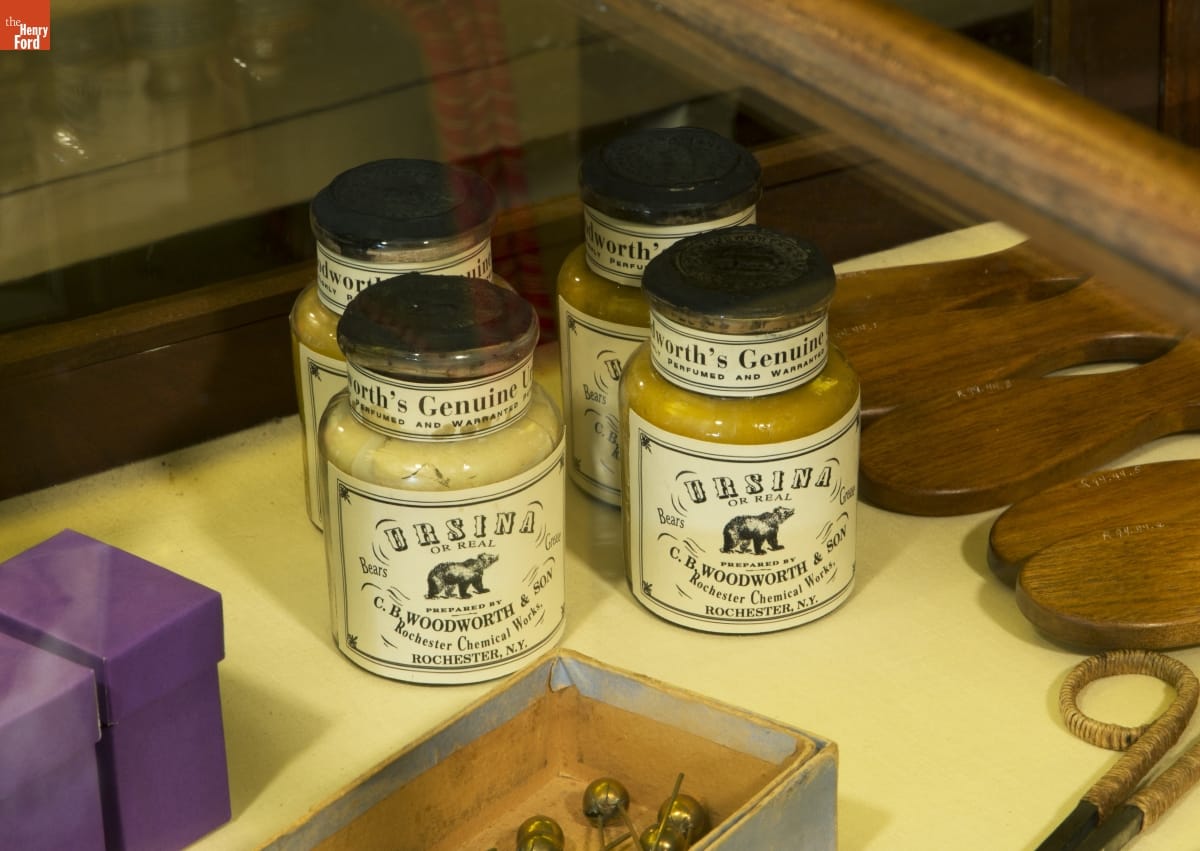 Pomades, oils, and dressings for keeping hair in place and sometimes for promoting hair growth were popular men’s grooming aids in the late 19th century. In fact, that is the major reason why ornamental lace tidies and antimacassars were so common—to protect the surfaces of chairs and sofas from these often greasy concoctions. This particular product claimed to be “real bear grease procured from the Rocky Mountains and very carefully refined.” 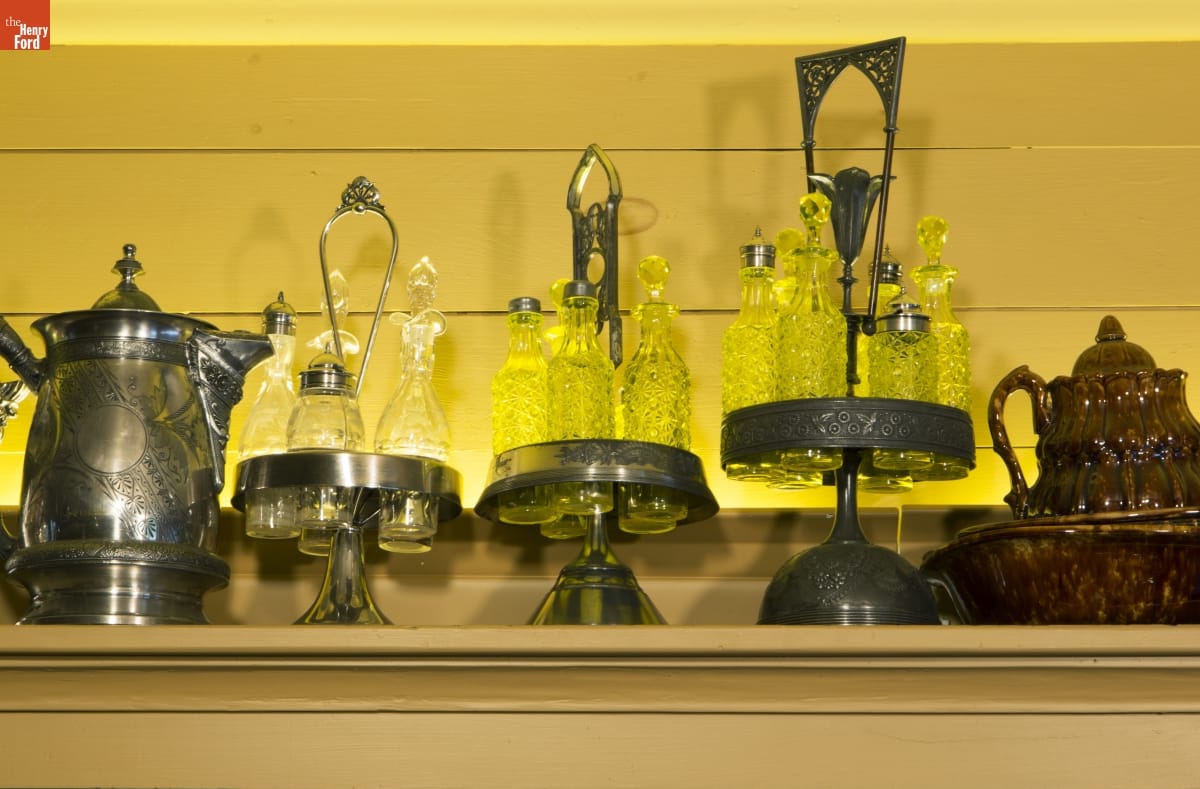 In the 1880s, silver-plated castor sets frequently formed the centerpiece of the dining table for middle-class families, reflecting the families’ good taste and economic status.  Castor sets would have been a necessity in places like hotels and boardinghouses, where large groups of people dined—each with different tastes in food. They were available in a tremendous variety of styles and prices. Most contained two to six bottles, generally for holding pepper, mustard, oil, and vinegar, and sometimes other spices. 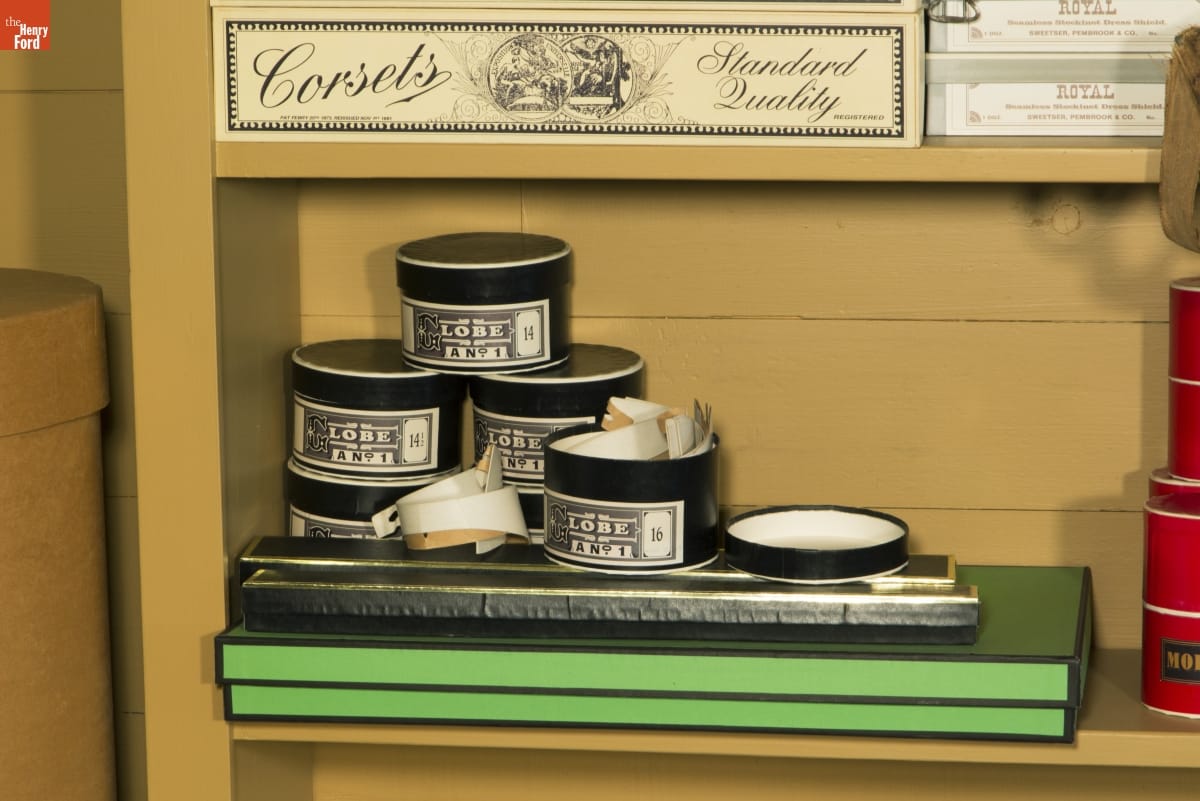 A white shirt with a white collar and cuffs marked the man as someone of means, or at least on his way up. But clean collars and cuffs were always a necessity, no matter what color and style shirt a man wore. Enter replaceable collars and cuffs.

Men’s collars of the 1880s were plain in style and were made of paper, celluloid, or linen. Collars were high and tight, either “standing” (straight up around the neck) or “turned outward” (tips or side edges turned outward or over and slightly down), complementing the coats which buttoned high during this time. Paper and celluloid collars were considered disposable, while linen collars could be washed and ironed and kept fresh for a period of time.

Women’s dresses were time-consuming to make and costly to have someone else make. Purchasing a new collar was an inexpensive way of freshening or updating the look of a dress that had been around for a while. Ladies’ collars were detachable and could be used multiple times on various garments. They ranged in price, from fairly plain linen collars to intricate lace ones. 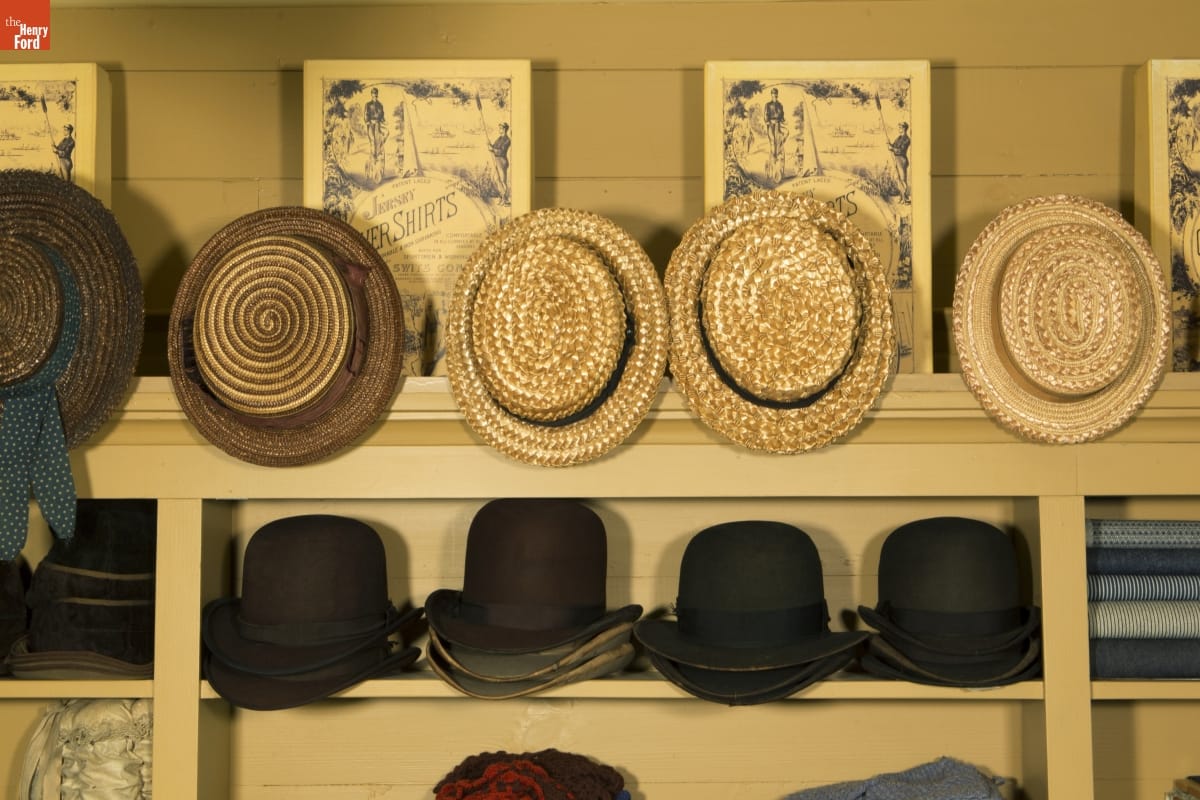 While top, or silk, hats might have been worn by a wealthy city gentleman going to a fancy affair, Waterford men would have generally worn a bowler hat, supplemented by a low-crowned straw hat for summer occasions. The hard felt bowler (usually referred to as a derby in the United States) was a staple, durable hat that could have been worn all day long—even at work—and was generally considered a symbol of respectability.

Also during this time, the hat industry aimed to persuade every man to purchase a new straw hat at the beginning of every summer. Straw hats tended to be water-resistant to hold up even on rainy days. 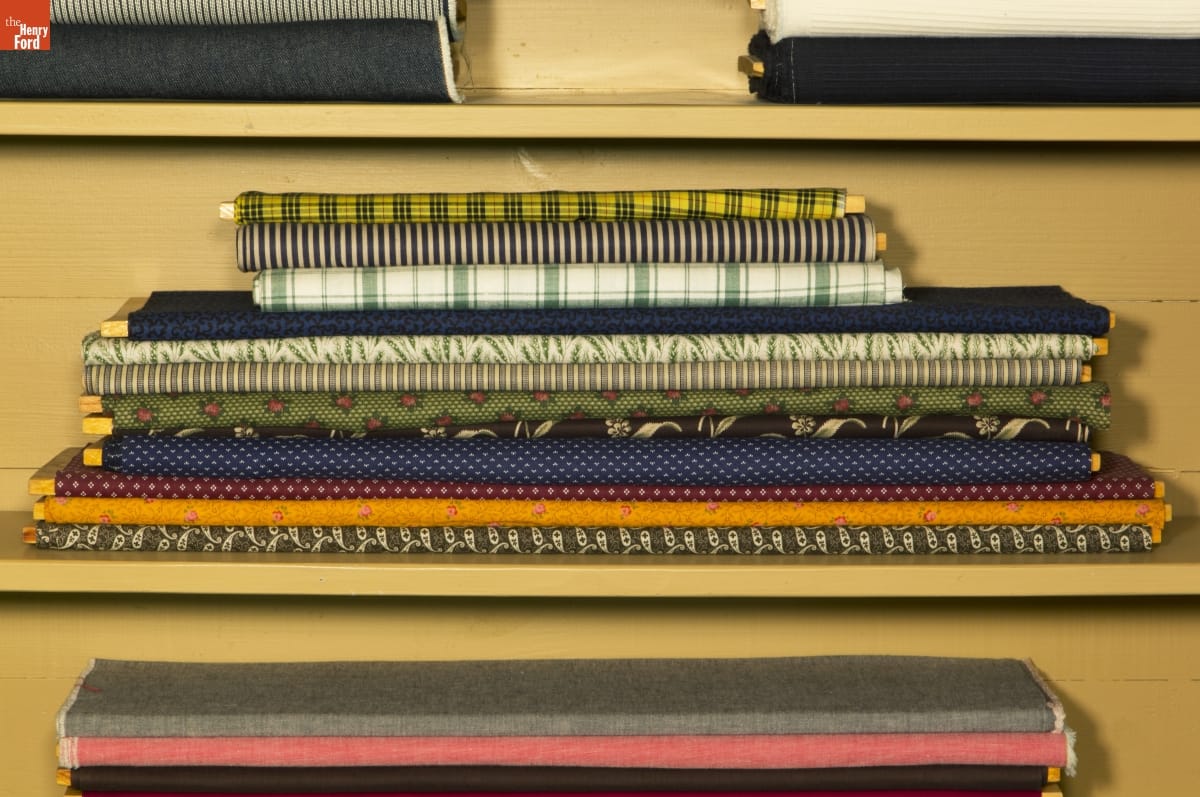 Women’s clothing was not ready-made yet, so all dresses had to be fashioned at home or by a seamstress.  Bolts of fabric and trims lined numerous shelves of general stores like this one.  The bolts of fabric in this store include: