Tales from the Collections Storage Building: The Giant Teapot

July 31, 2020 Think THF
Sometimes, the objects we find in storage surprise us.

Imagine this: the Institute of Museum and Library Services (IMLS) project team is working in the Collections Storage Building, selecting objects to be conserved as part of our grant-funded work. From the top level of pallet racking, about 15 feet above the ground, we remove some pallets of boxes and bring them down to ground level to unpack. We then climb the moveable stairs to take a peek at the area that we have exposed. The sight that greets us is confusing, but intriguing: a giant, golden-toned teapot, sitting in the center of the racking, far enough back that it was not visible from the ground. It was almost like revealing a magic lamp! We test-lifted it and realized that it was very light for its size, and must be hollow, so we carefully moved it off of the racking and to ground level 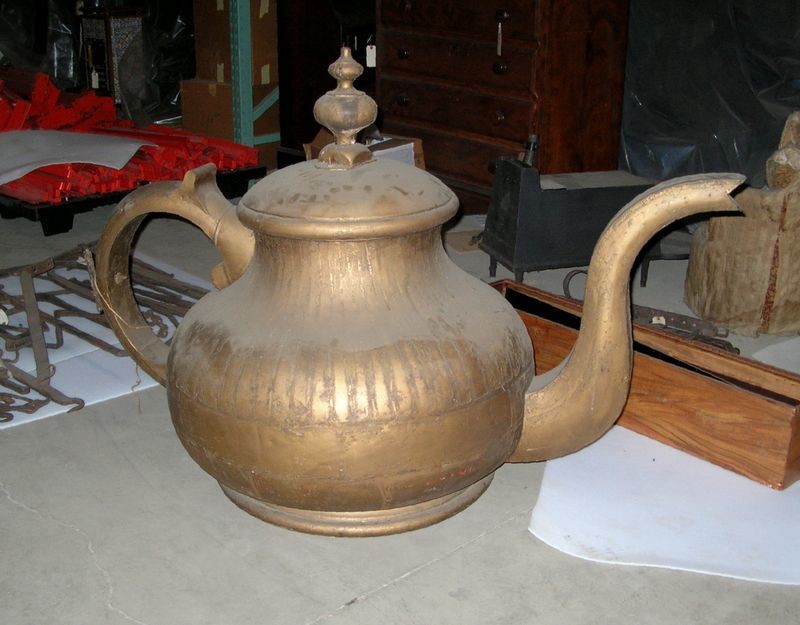 The giant teapot trade sign as we found it in the Collections Storage Building (after we had moved it down from the top shelf).

From the bracket that we found on the handle, it quickly became apparent that this was some sort of a trade sign, likely for a tea shop or coffee house. The body of the teapot occupies a space about three feet on every side – it would have been a very eye-catching sign! A little bit of research led us to some other interesting examples, including one that currently hangs above a Starbucks in Boston and is set up to blow steam out of its spout!

Our teapot has some mysteries, though – the golden paint has some texture to it, as if there were at one point a stripe along the widest part of the teapot’s body, with vertical stripes reaching from that stripe to the lid. Was the teapot originally painted a different color, or with a pattern? We did some minor tests to see if we could isolate different layers of paint, but we were not successful. We might decide in the future to do a more thorough analysis, but that would be after discussion with the curators. We also noted that our giant teapot does not have a hollow spout, and therefore, despite being hollow, probably never had the mechanism to blow steam in the same way as some others. 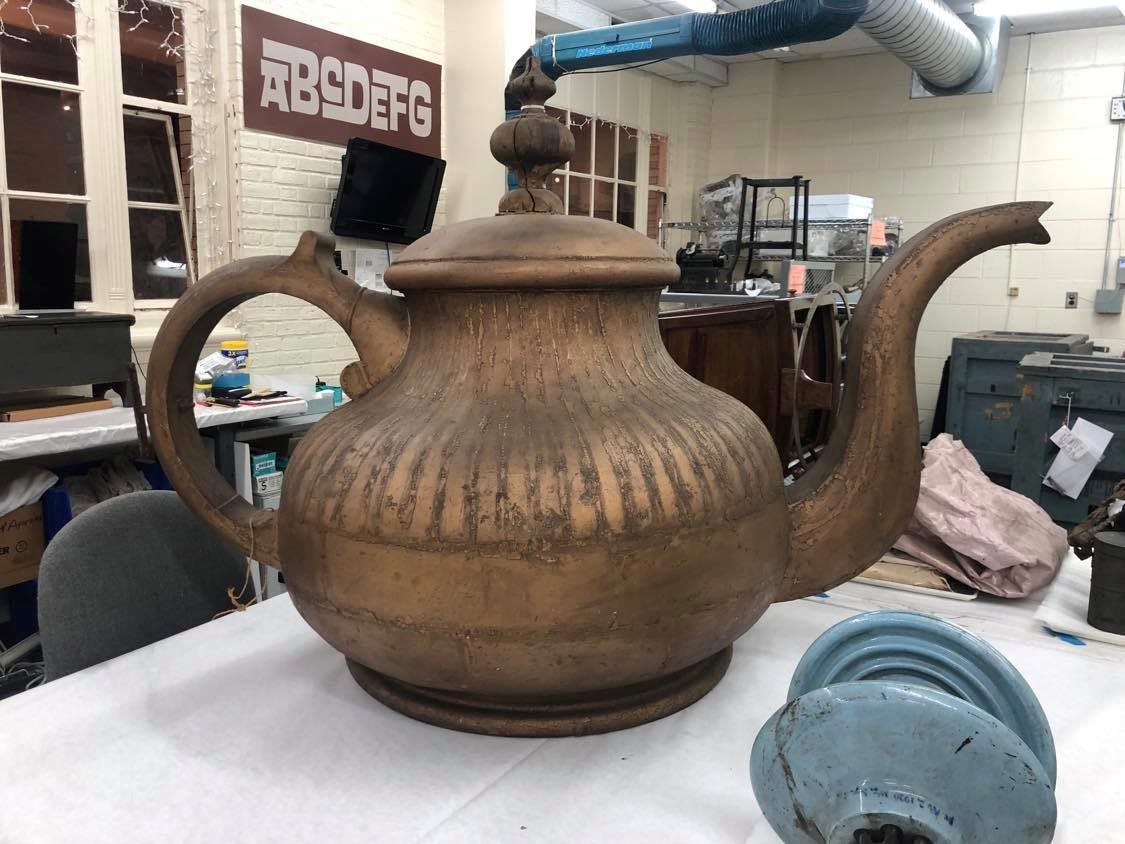 The giant teapot on the table in the lab - you can really get a sense of how large it is!

Ultimately, we don’t know a lot about where the giant teapot was originally used, or where it may be displayed in the future. We treated this object with nothing more than a simple cleaning – it was overall very stable to begin with, just dusty and dirty from being in storage. By minimizing treatment to the point of only stabilizing the object, we are leaving the option open for a future conservator to do more work while still ensuring that it’s going to be safe and sound in storage. It also allows us to treat more objects from storage as we progress through the grant. Maybe someday in the future we’ll see the giant teapot again, but for now it’s safe and sound in the Main Storage Building! You can check it out in our Digital Collections. 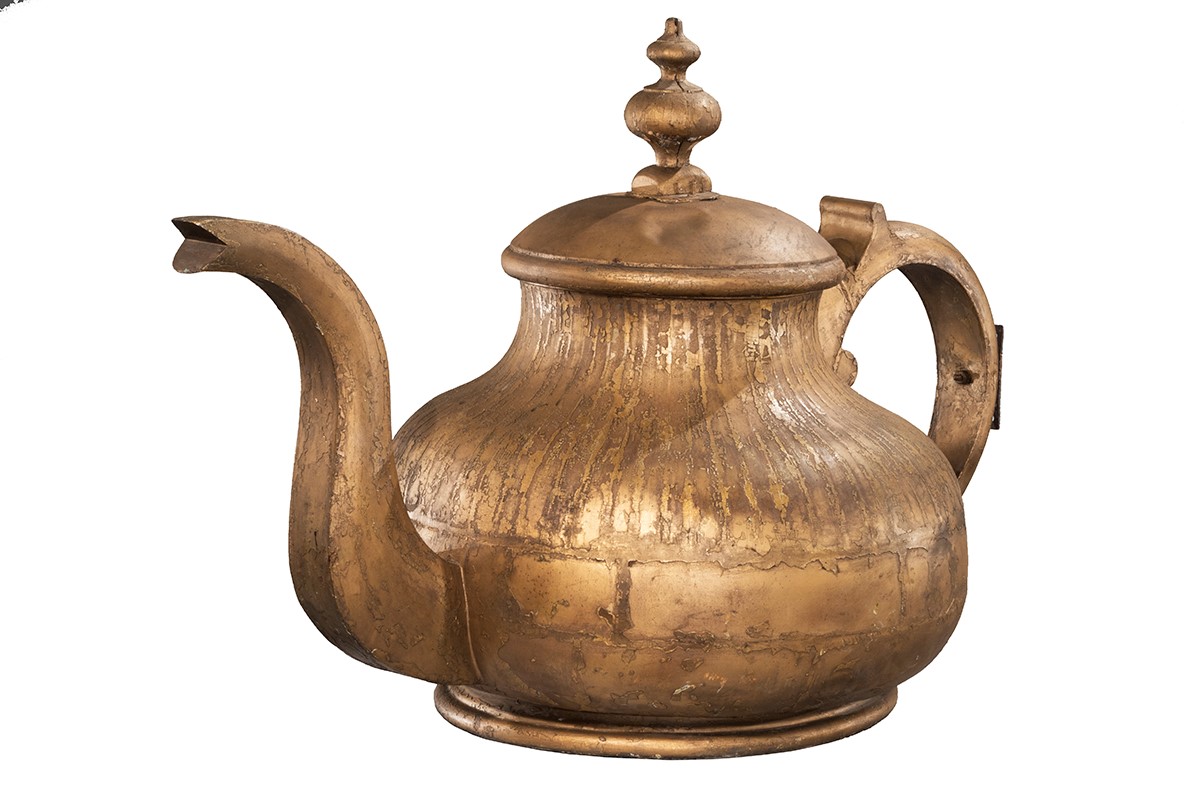 The giant teapot after treatment, ready to go back to storage.