The Art of Provenance Research: Playing Detective in Our Collections 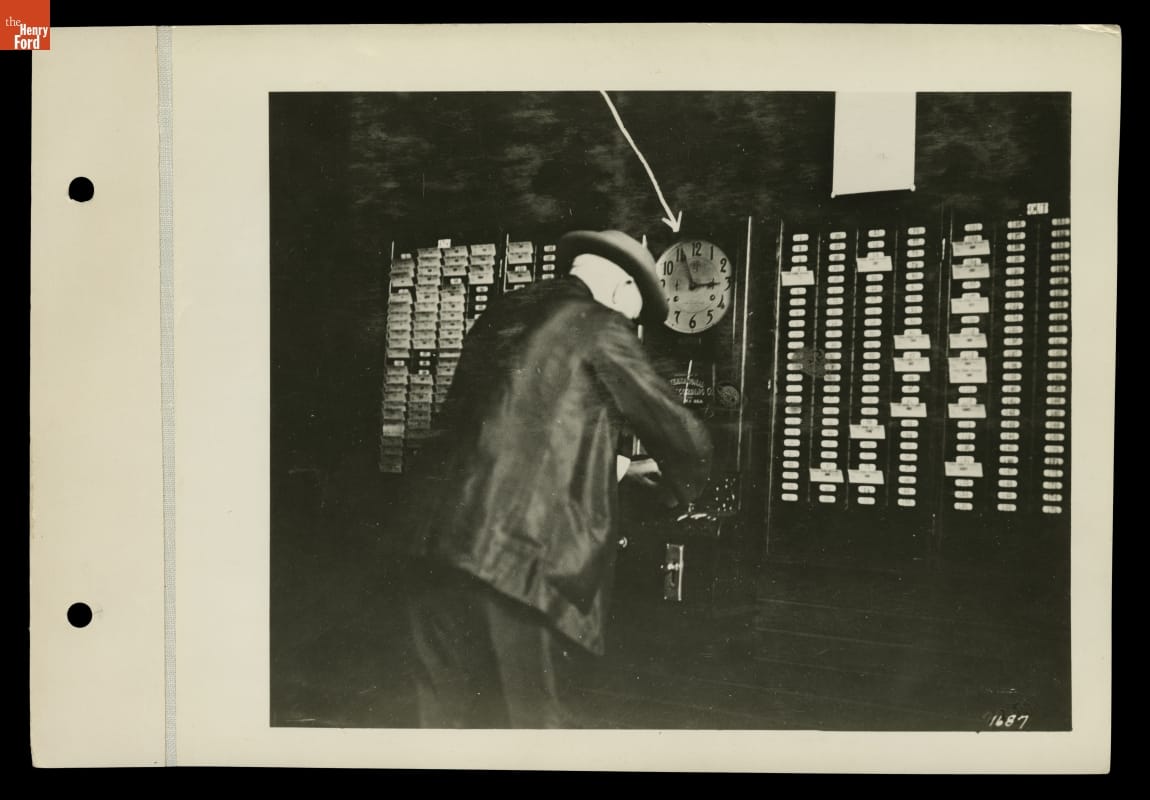 As my colleague Laura Lipp discusses in her blog post on cataloging, The Henry Ford’s registrar’s office sometimes “plays detective” by engaging in provenance research to determine the history of the ownership of an artifact – and to deepen our knowledge of the stories behind our artifacts.

First, a little background on our early collecting.

In the 1920s and 1930s, The Henry Ford received thousands upon thousands of artifacts from sources all over the country. Staff at that time attached paper and metal tags to the artifacts, writing their source information (either the donor or the point of purchase) on the tags. They also typically included the geographic location of the source and a date. In the 1950s, staff began to catalog the collection, assigning object identification numbers (“object IDs”) and creating files that held any documentation or correspondence about the artifacts. The object ID is the unique number assigned to an artifact that indicates what year the artifact came in, and links it to its “provenance”—the source it came from and any associated stories.

On occasion over the years, staff encounter artifacts that have lost their tags, or the tags have crumbled or become illegible, so the artifacts have been disassociated with their histories. At this point, the detective work begins, to figure out the artifact’s provenance. We have many internal resources at hand to perform provenance research – our catalog database, our files and correspondence, photographs of artifacts, inventories, original cataloging cards, and more. We also use the Internet, oftentimes turning to online genealogical databases of census and demographic records.

An example of disassociated artifacts came up one day when someone wanted to know what artifacts we had related to Alexander Hamilton (can’t imagine why). Curator of Decorative Arts Charles Sable and I started looking into it. Upon searching our database, we discovered that we had received some silver that descended in the Hamilton family to Alexander and Eliza’s great-great granddaughter, Mary Schuyler Hamilton: a “sugar bowl” and candlesticks. Unfortunately, the lost tags meant we had to work through all our silver records to see what might match.

We looped in Image Services Specialist Jim Orr and he found a photo of these silver artifacts taken around the time they arrived at our museum. Now we at least knew what they looked like! The sugar bowl was not a sugar bowl – with its pierced sides, the sugar would have leaked out. We expanded our search to other silver bowls and dishes, and the curator and I came across a record for a “sweetmeat” dish that sounded promising. The record had a silver project inventory number and a location. After a quick trip to one of our storage rooms, lo and behold, the “sweetmeat dish,” a bit tarnished, matched the artifact in the image! One down, candlesticks to go. 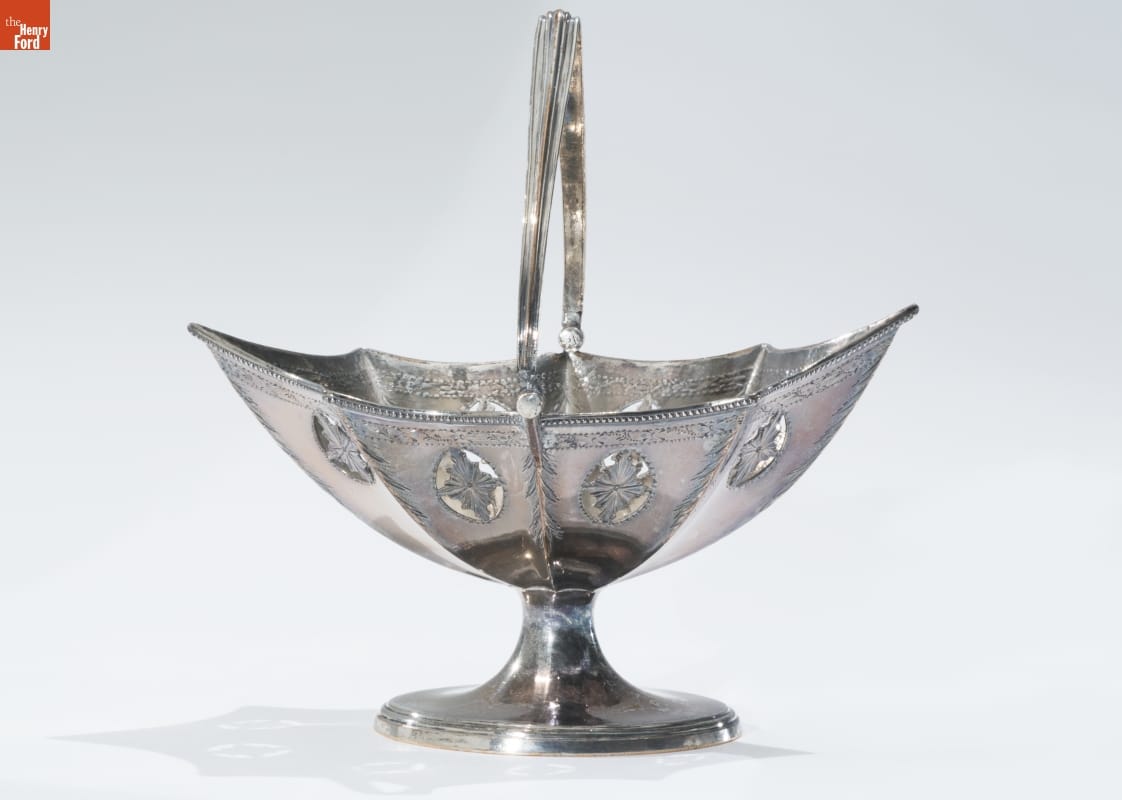 After an unsuccessful stop in a storage area where there are many candlesticks, I returned to my desk and started going through all our silver candlestick records. Just as I was getting ready to call it a day, I reached a record, took a double-take, and called the curator over from his office to look at it. “OH MY …!” was the exclamation all my co-workers heard, “YOU FOUND THEM!” We reunited the candlesticks with the sweetmeat dish, had them photographed, and they are now viewable online. I can easily state that was one of my proudest days. 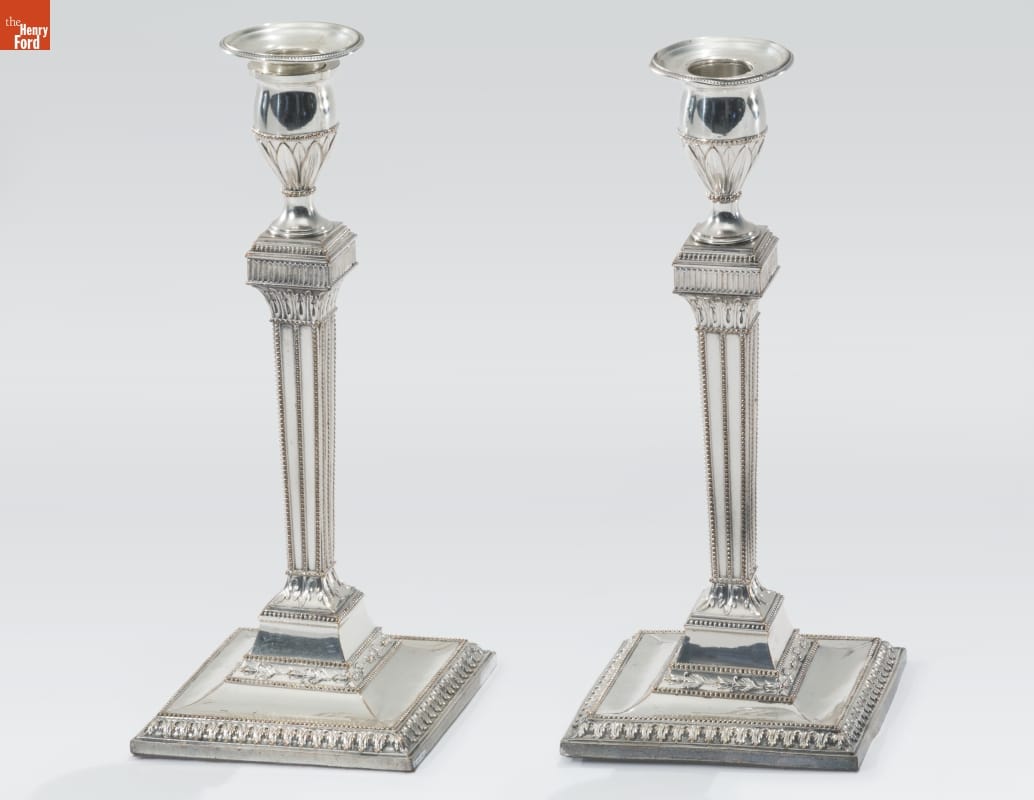 Most of the time, we know who donated artifacts, and where the donors lived. When looking to further document these artifacts in our collection, we do research into the donors to fill in information that wasn’t originally captured. While working on a project related to agricultural equipment, Curator of Agriculture and the Environment Debra Reid and I were interested in learning more about some artifacts that were donated by Iva and Ruby Fuerst, such as this potato digger and this hand dibble. 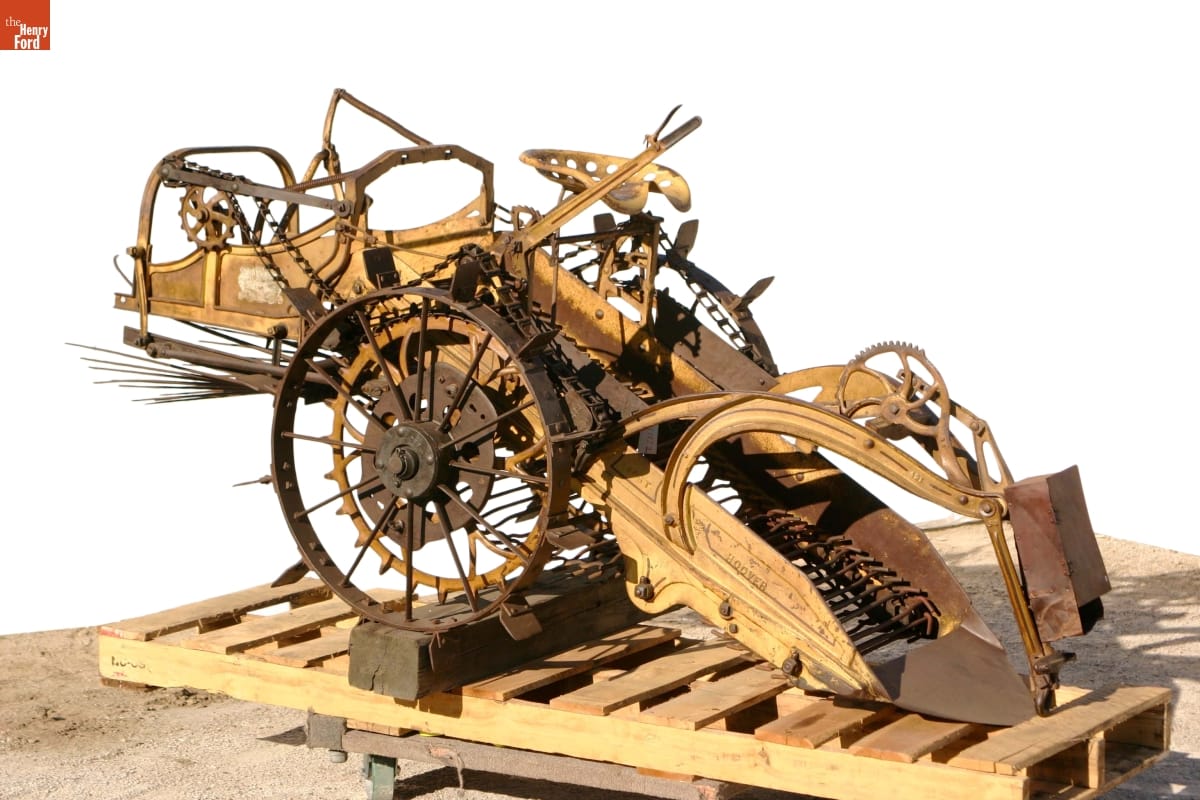 Digging into the Internet and genealogical records, I was able to reconstruct a small family tree. Ruby and Iva’s grandparents, Lorenzo and Barbara Fuerst, immigrated from Germany and were farmers in Greenfield Township (now Detroit) starting in the late 1850s. After the passing of Barbara in 1905, Iva and Ruby’s father Jacob, who had an adjacent farm, continued farming in that area until he sold it in 1918 and bought a farm in Novi Township. We now know that some of the equipment was likely used first on the farms in Detroit and later in Novi. Ruby and Iva, with no heirs to pass the land to, sold most of the Novi farm to the city around 1970. It is now known as Fuerst Park, and you can find a photo of young Ruby and Iva in this brochure. 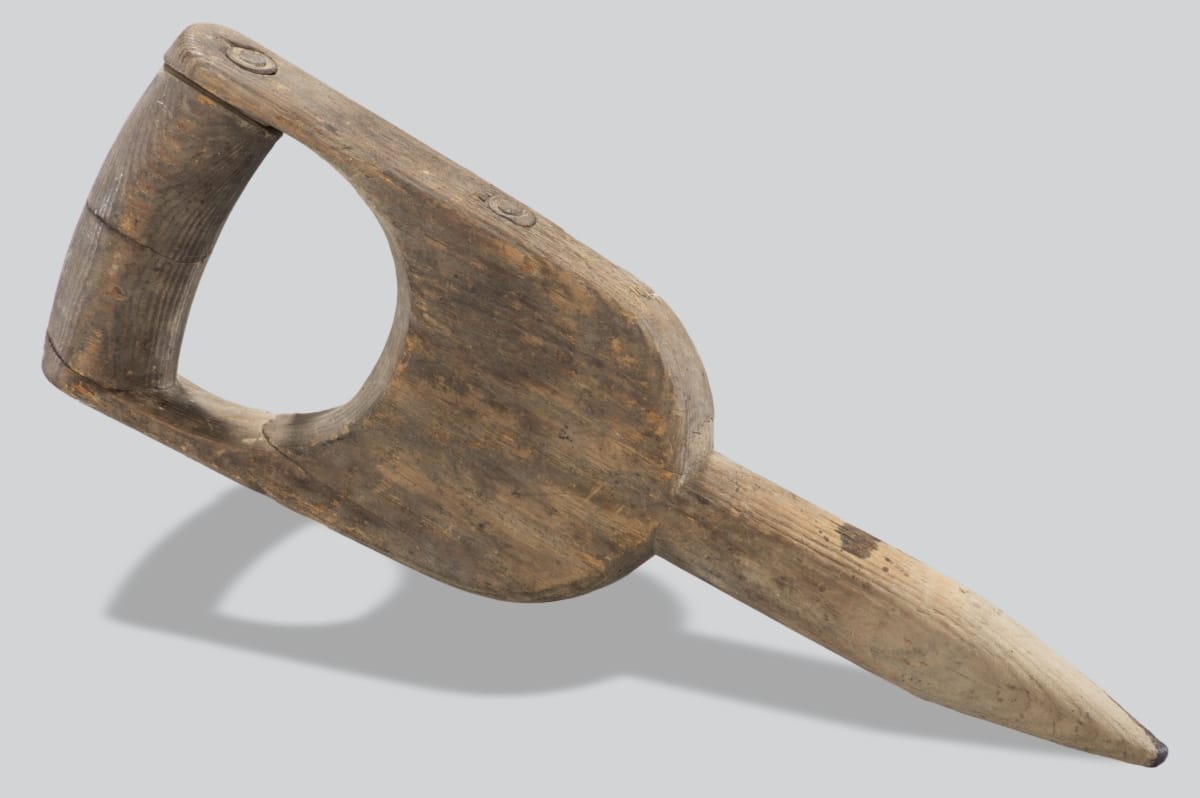 It's not just 3D artifacts that need provenance research, but also some of our archival holdings. One day, staff encountered some timecards in the archives that appeared to have been used by Thomas Edison. Curious to know more and hopeful to verify that exciting association, Registrar Lisa Korzetz investigated the matter and was able to find correspondence with the donor, Miller Reese Hutchinson, chief engineer at Edison’s West Orange Laboratory. Hutchinson details in his letter that the four timecards he was donating were the first four cards used by Edison in 1912 after Hutchinson had installed a new time clock at the laboratory. He also donated a photograph of Edison using the timecards at the time clock. Hutchinson was determined for a week to try to capture Edison using the timecards and clock, and finally succeeded on the last day of the week! 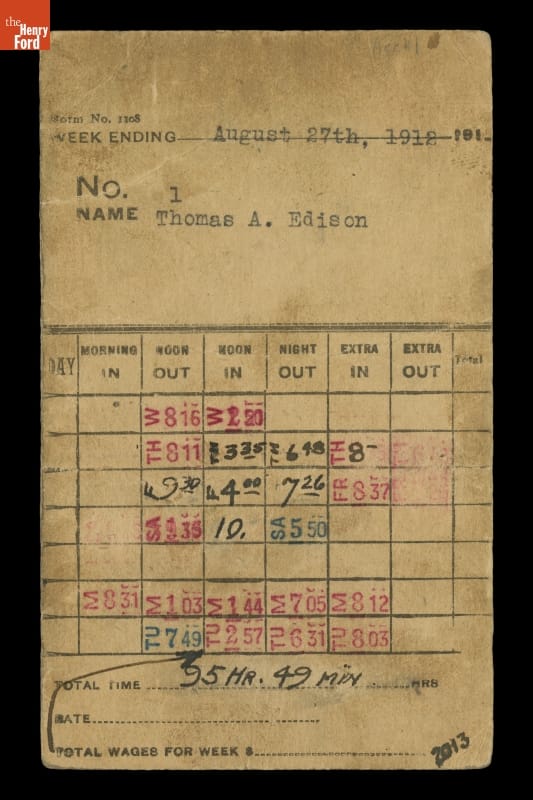 Today, when cataloging new artifacts for the collection, we document the provenance via the background information that the curator gleans from the donor or point of purchase. We do additional research to verify and fill in any historical background. We apply the object ID directly to the artifact in a manner approved by Conservation – different methods on different materials. We also make sure the number is discreet and easily reversible – meaning it can be removed without any adverse effects to the artifact. By using these standard museum practices to document and identify artifacts, we assist our curatorial colleagues in their pursuit to interpret and exhibit our collections to the public.

Aimee Burpee is Associate Registrar—Special Projects at The Henry Ford.