The Arts and Crafts Movement and Development of the Modern Home

American homes in the Victorian period were designed to showcase their owners’ good taste. This is the Wright home in Greenfield Village, where brothers Wilbur and Orville Wright grew up in the 1880s and 1890s. 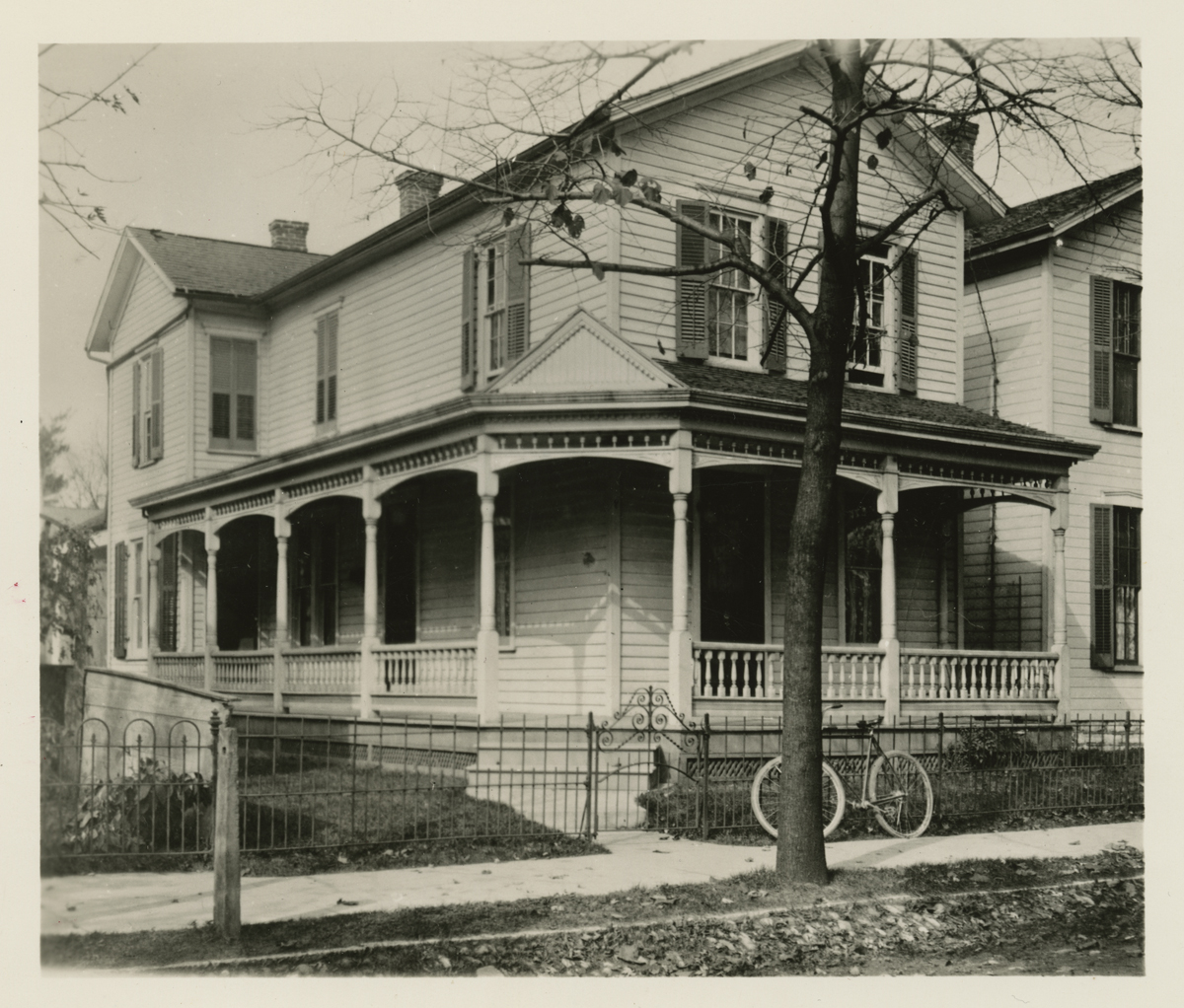 As the “best” room, parlors were meant to show the family’s good taste to honored guests, so decoration was carefully arranged. This photo, probably taken by Katharine Wright, sister to Orville and Wilbur, documents the room in the 1890s. 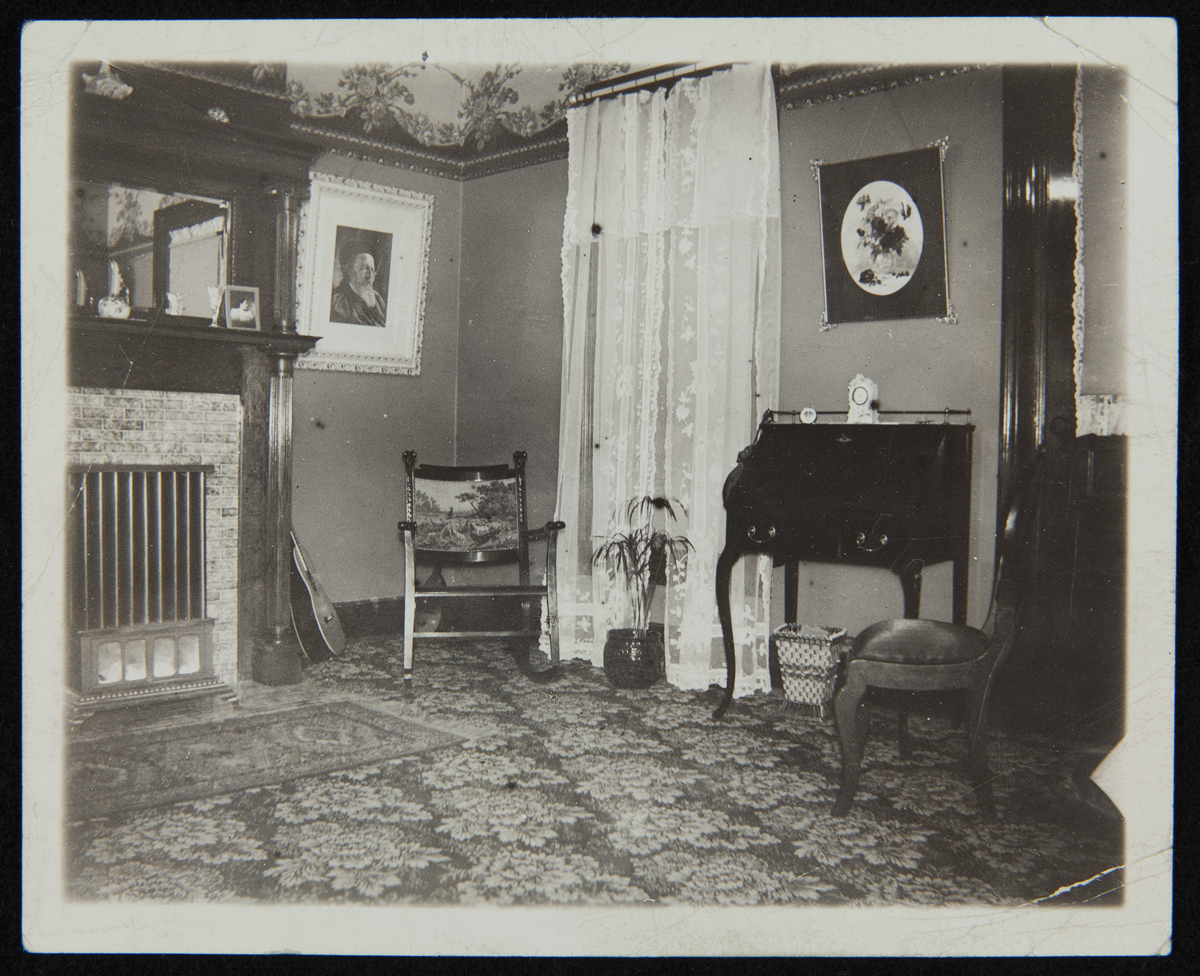 The Firestone Farmhouse, where Harvey Firestone was raised, is also in Greenfield Village. Here is the parlor as curators interpreted it to the mid-1880s. Notice the conscious profusion of pattern, ornament, and what we would call clutter. 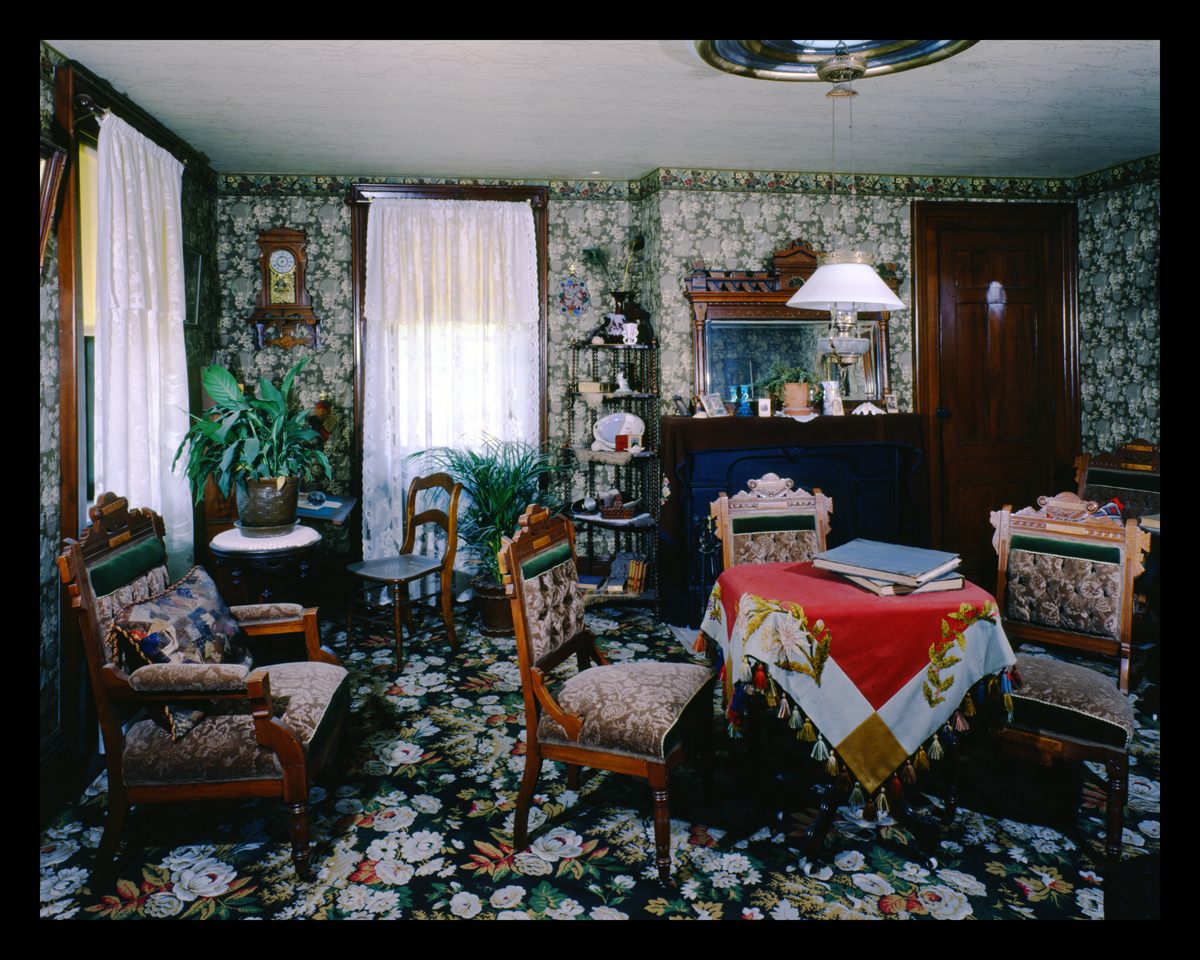 The family portrait shows just how carefully objects were placed. Even the people seem arranged as if they were objects. In the Victorian mindset, materialism and display were utmost. 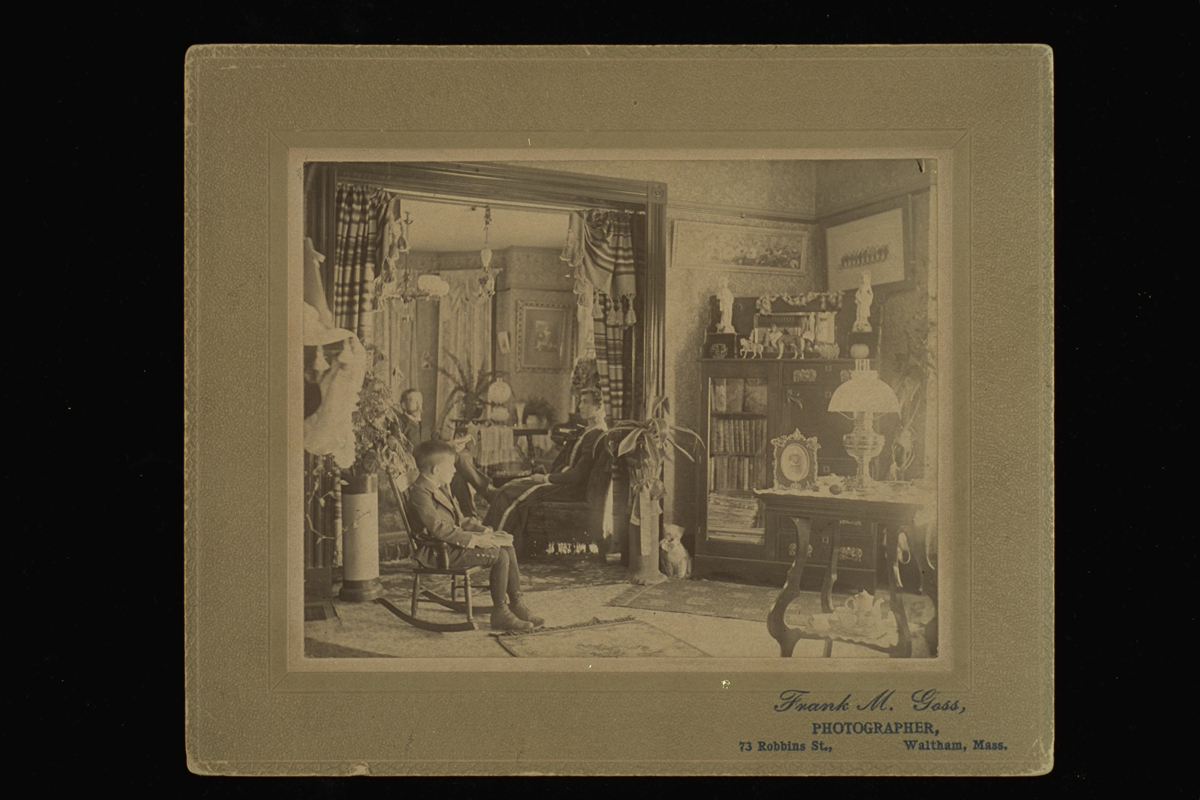 In this ostentatious, high-style interior from Brooklyn, New York, we see the heights of materialism and conspicuous consumption. 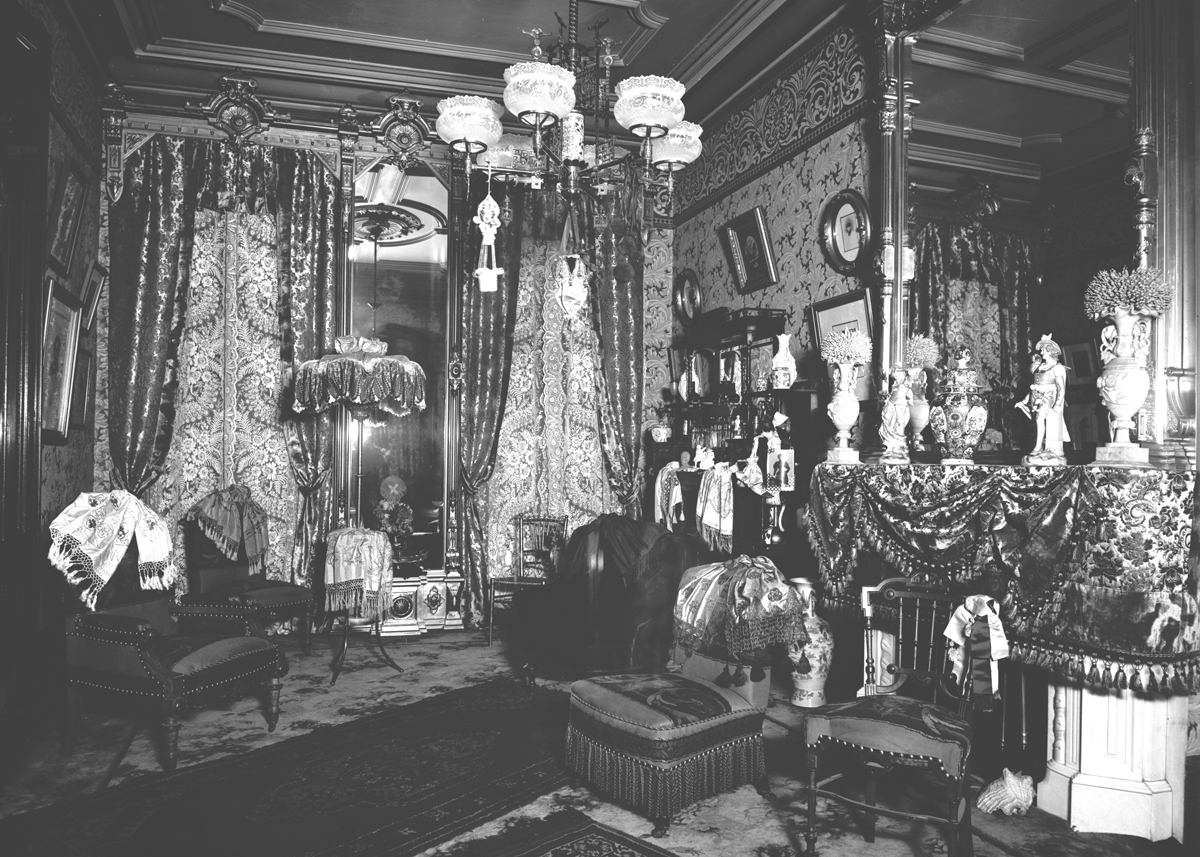 This high-style parlor cabinet, made in New York, was meant to impress. Composed of design elements from many historical periods, it truly is a jumble. 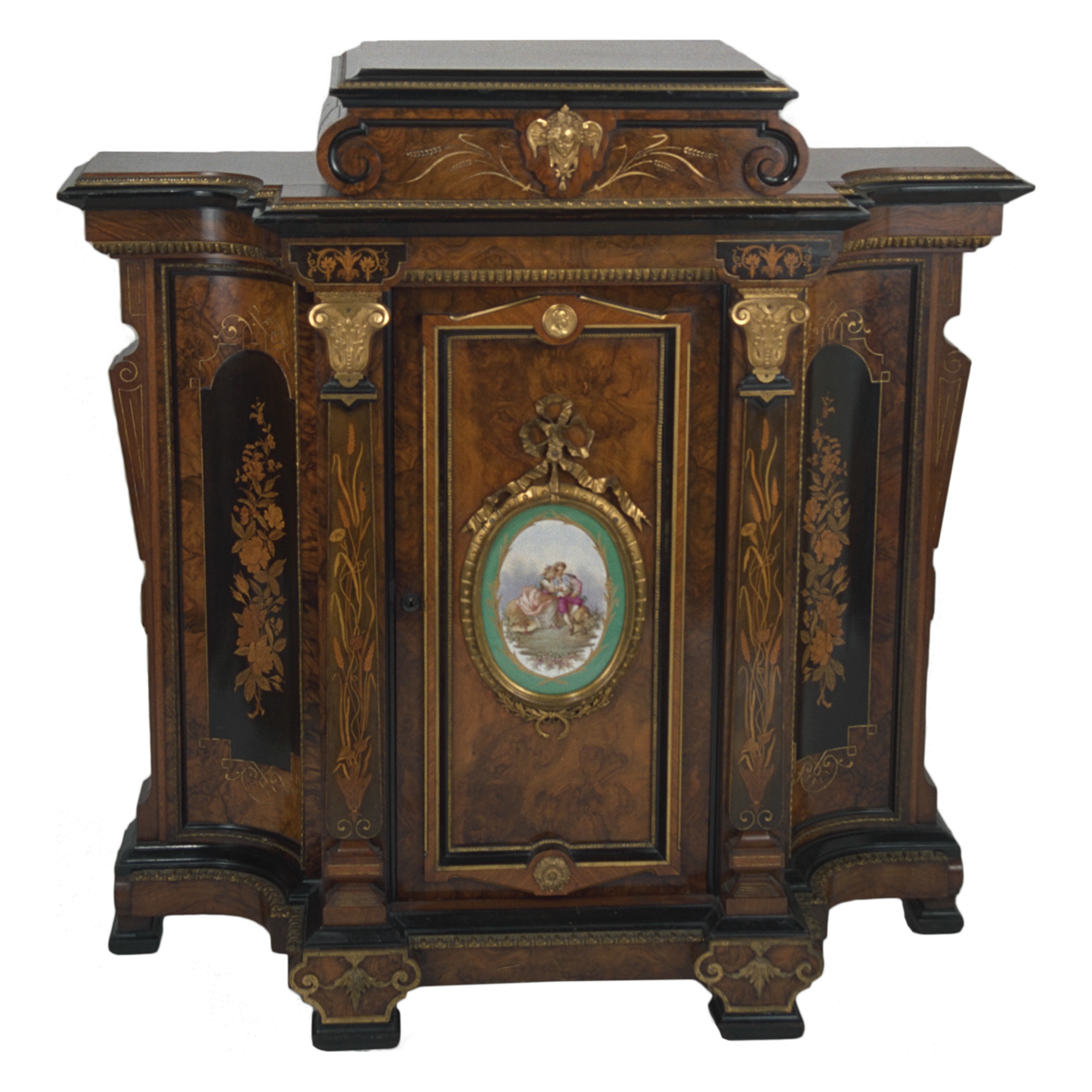 This music or print stand was made for either a parlor or a library and gives us a sense of just how particular Victorians could get with specific types of furniture. 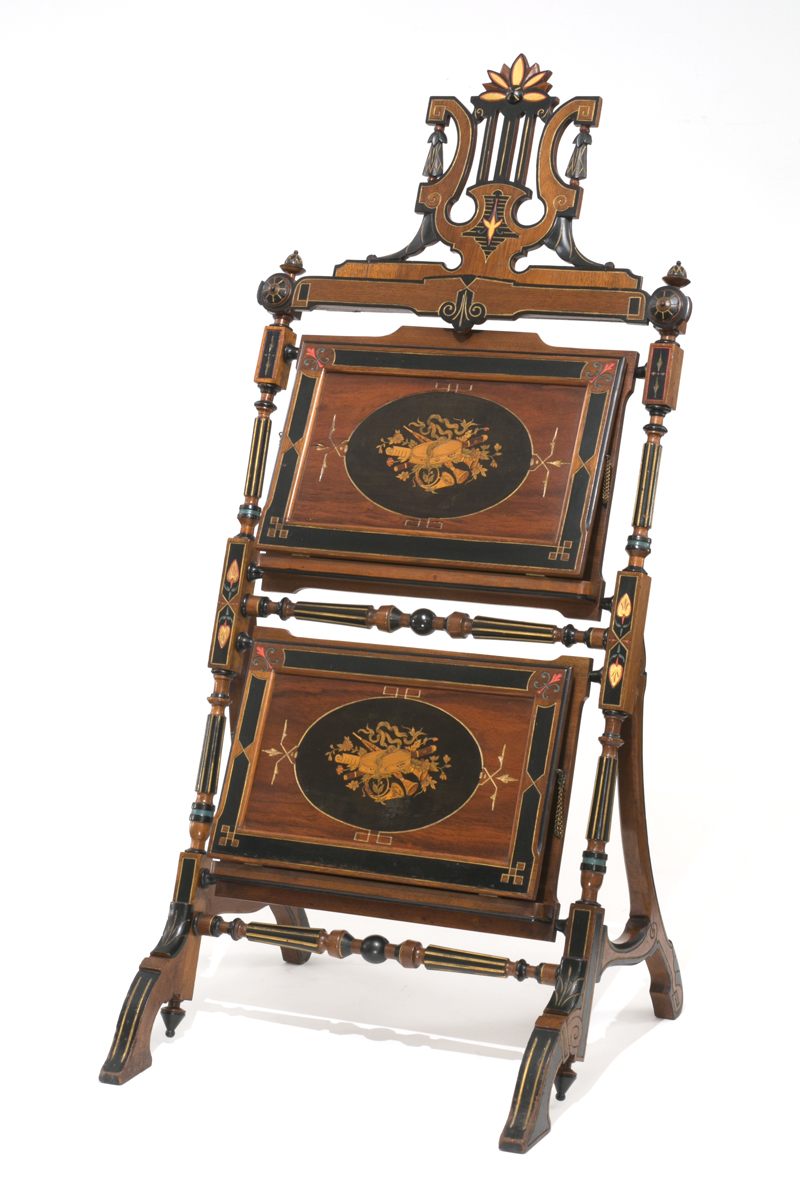 Victorians loved mixing and matching different styles, even within a single object, like this one. The most important thing was decoration, and the more the better. 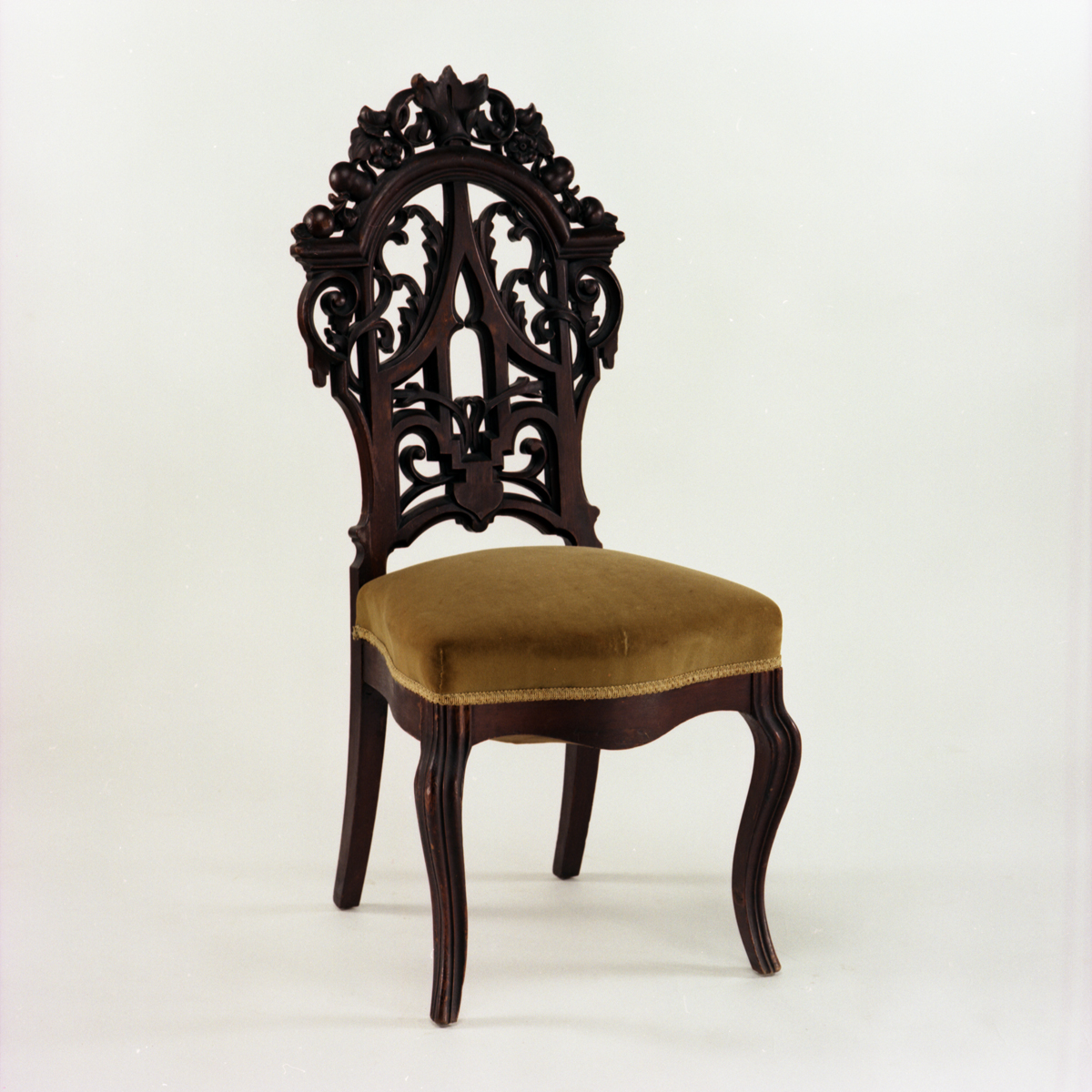 Victorians also loved to mix exotic materials into their rooms. During the 1880s, there was a craze for furniture made from animal horns. This chair is part of a set. 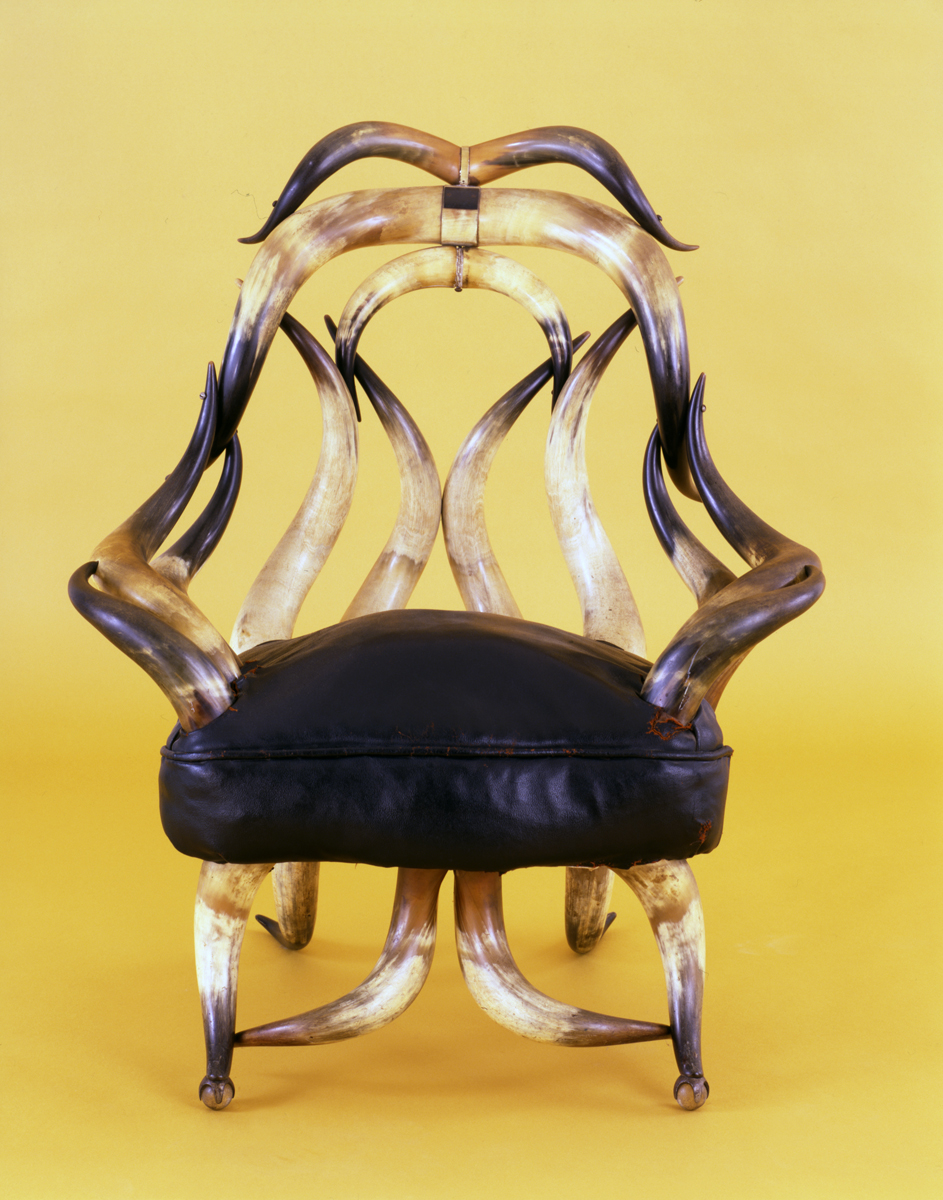 Dramatic changes in taste came through the work of English reformer, William Morris. Morris sought to change society by creating the first interior design firm, Morris & Company. Probably his most important design was this reclining chair.

Morris despised “overwrought” decoration. He wanted to return to the simple design of the pre-industrial world. He wanted to reunite the arts with the crafts, destroyed by industrialization. This came to be called the "Arts and Crafts" movement. Ideals of the Arts and Crafts movement were adopted by American tastemakers in the 1890s. Gustav Stickley published a popular magazine called The Craftsman, and marketed a line of furniture, including his version of Morris’ chair.

Stickley advocated simpler, less fussy interiors, with multi-purpose rooms, for less formal living. The concept of the living room was born on the pages of Stickley’s The Craftsman magazine. 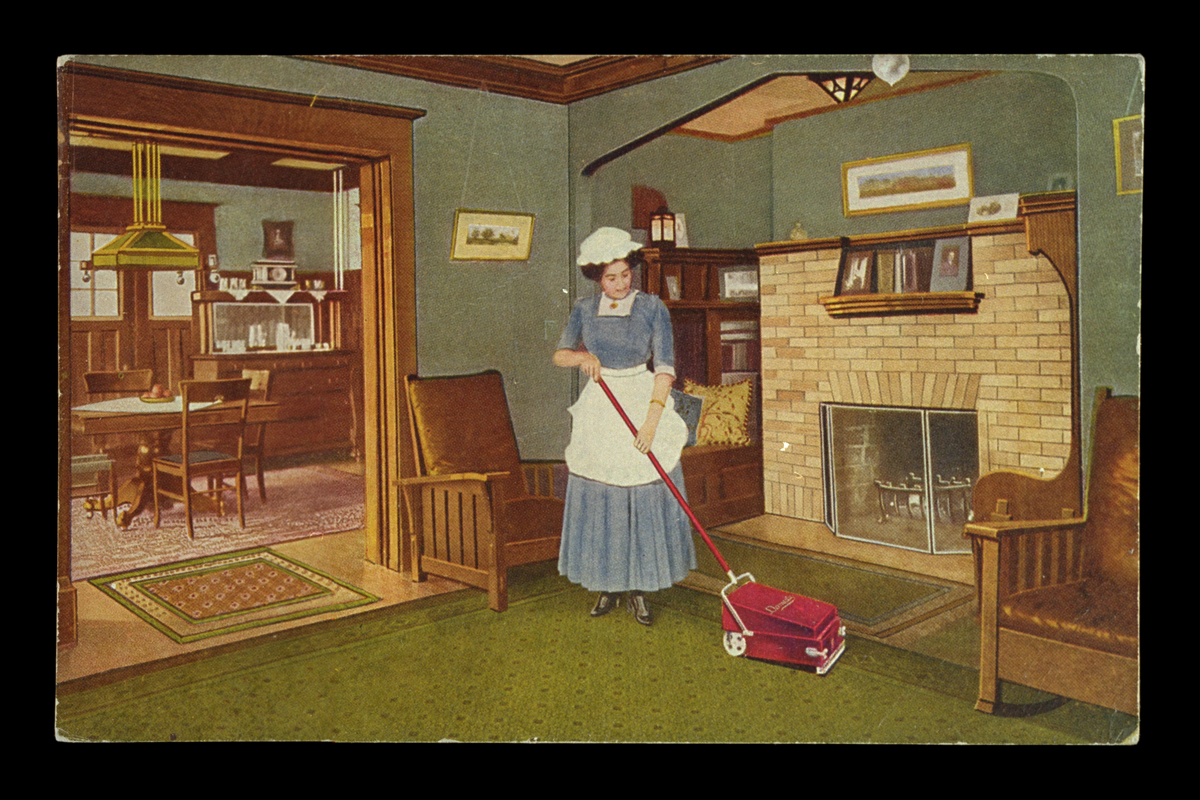 This brochure for wallpaper shows the most up-to-date Arts and Crafts interior available to Americans in 1912. As the title says: "A Well Decorated Home is a Potent Aid to Contentment & Happiness." The hall flows into the living room. 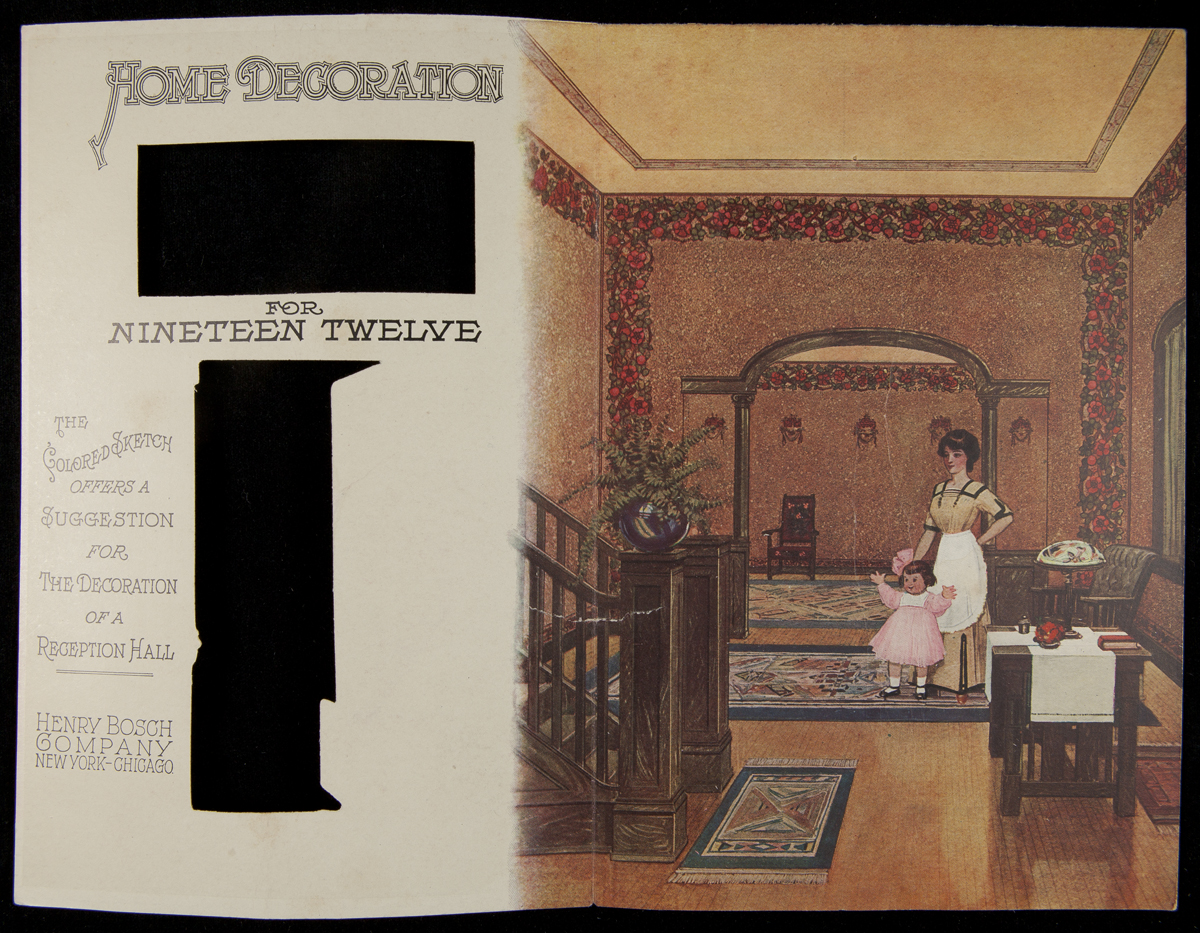 Stickley also promoted the idea of the bungalow, or Craftsman house, much less formal and, he argued, more comfortable than the Victorian house. 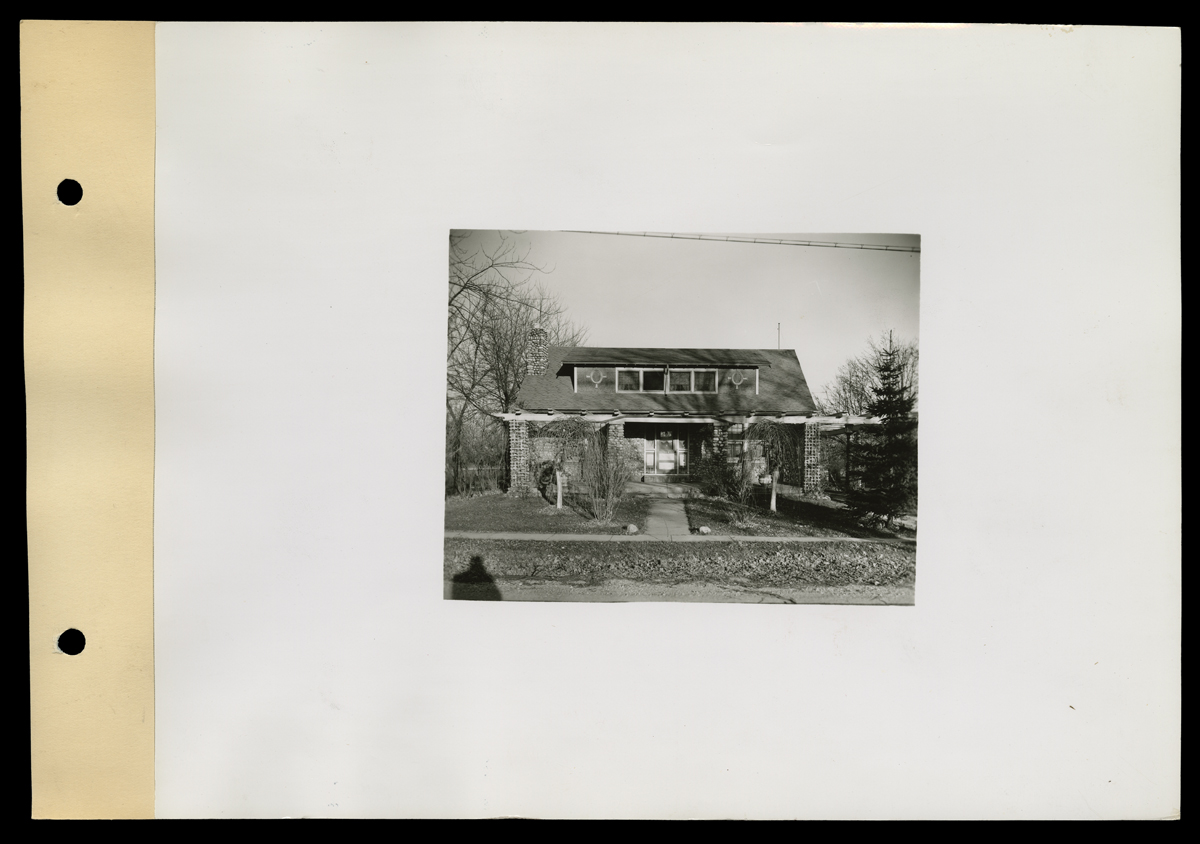 Architect Frank Lloyd Wright took these ideas further with his Prairie houses, where rooms flowed into one another, and exteriors took their cues from the surrounding landscape. This is an unexecuted design for Henry Ford’s Fair Lane Home. 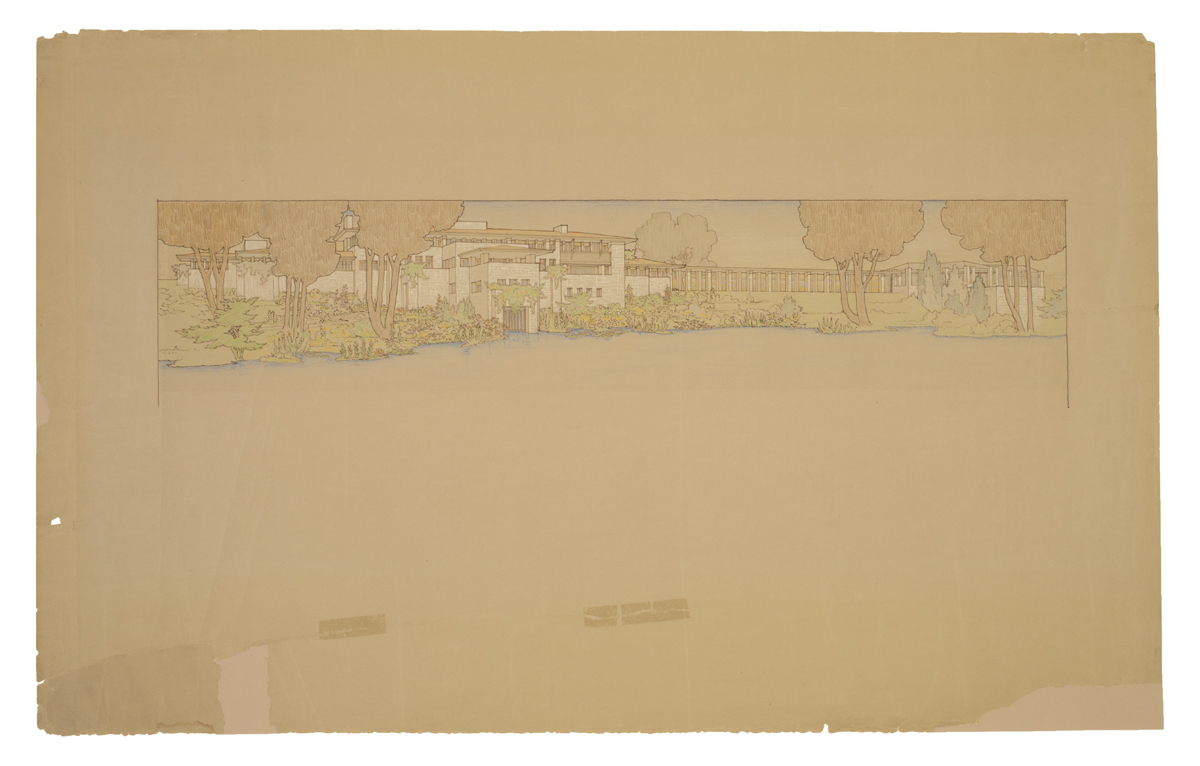 This library table displays the simple form and visible construction techniques emblematic of Arts and Crafts furniture. It could be used in a living room as a decorative table or as a desk. 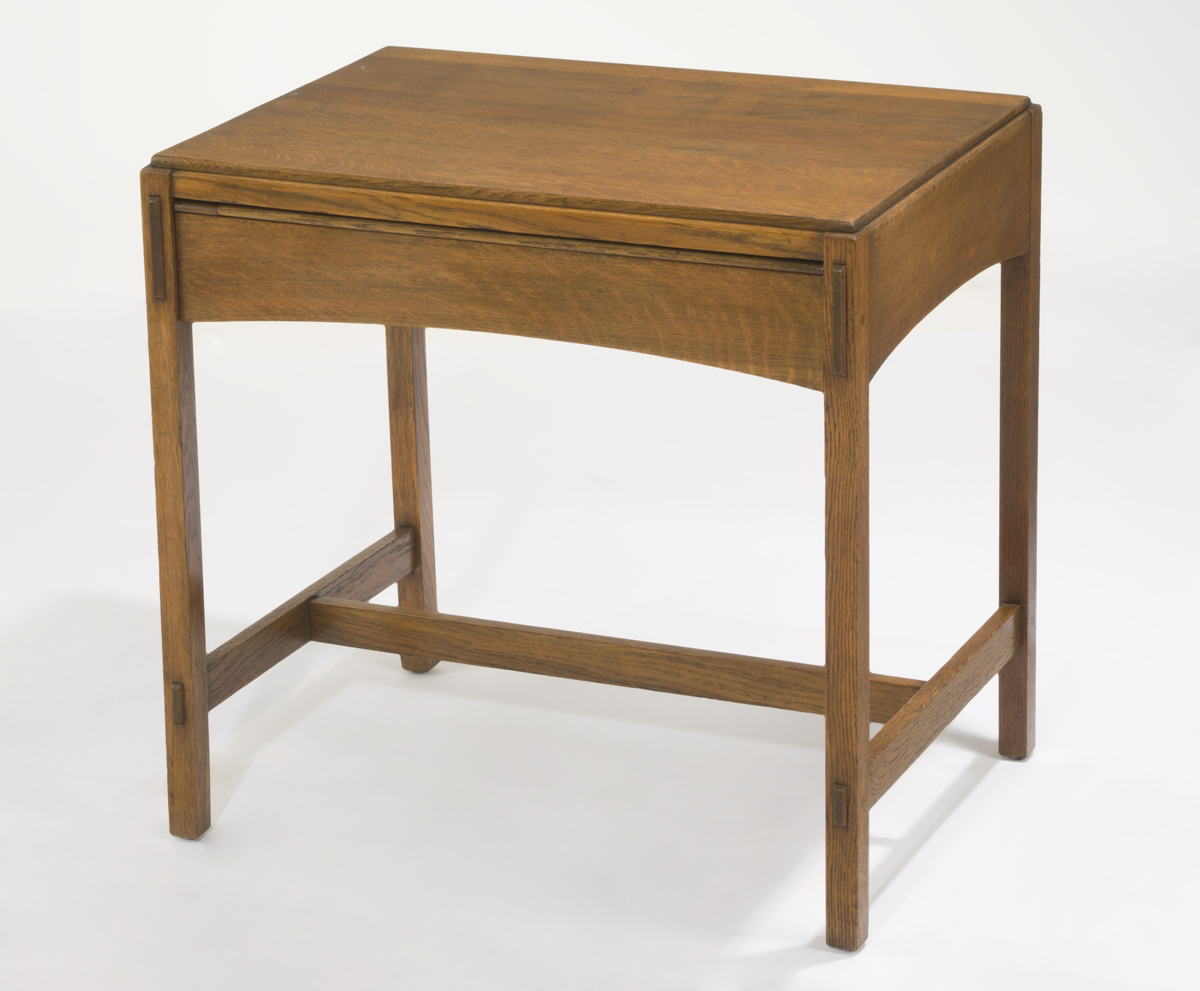 Textiles were an integral part of the Arts and Crafts interior. Designers emphasized the use of stylized botanical motifs, such as roses, which harmonized with furniture, ceramics, and artwork. The ideal was to create a unified interior environment. 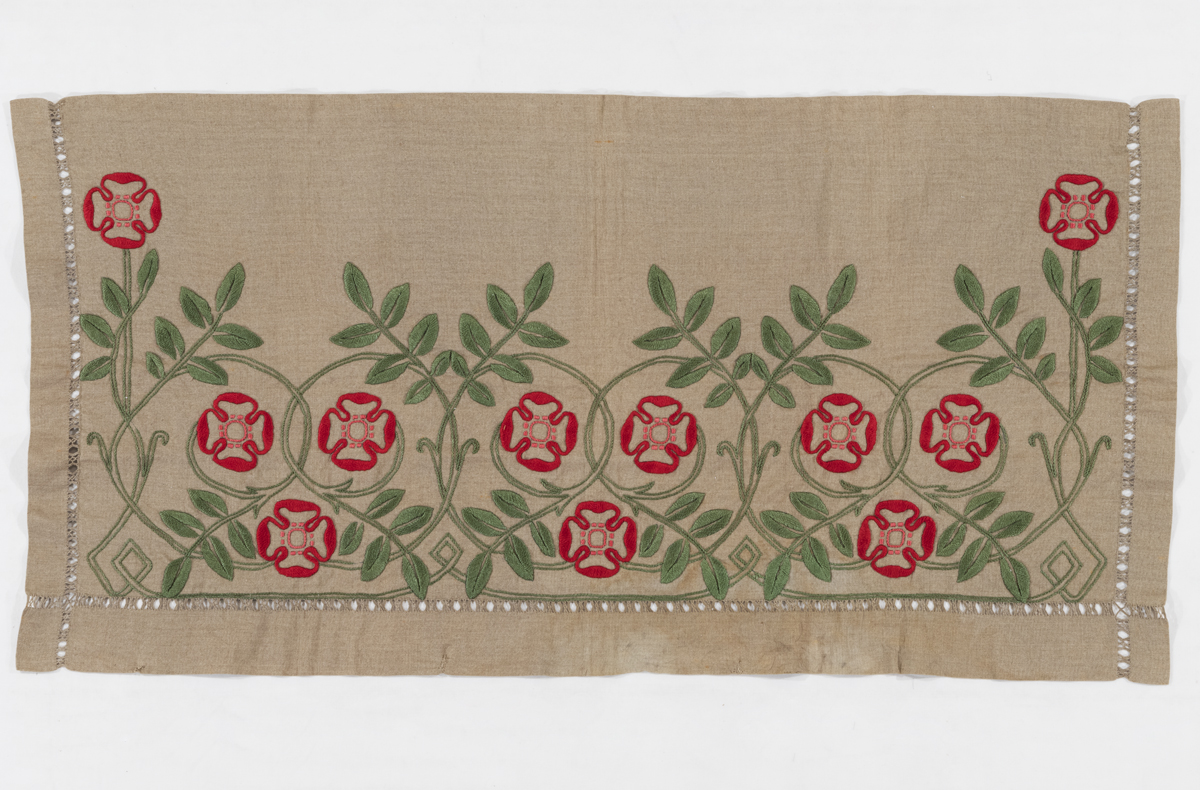 This tile was intended to be a part of a larger composition, perhaps lining a fireplace, where the turtles would follow in a line from head to tail. The effect was intended to harmonize with an Arts and Crafts interior environment. 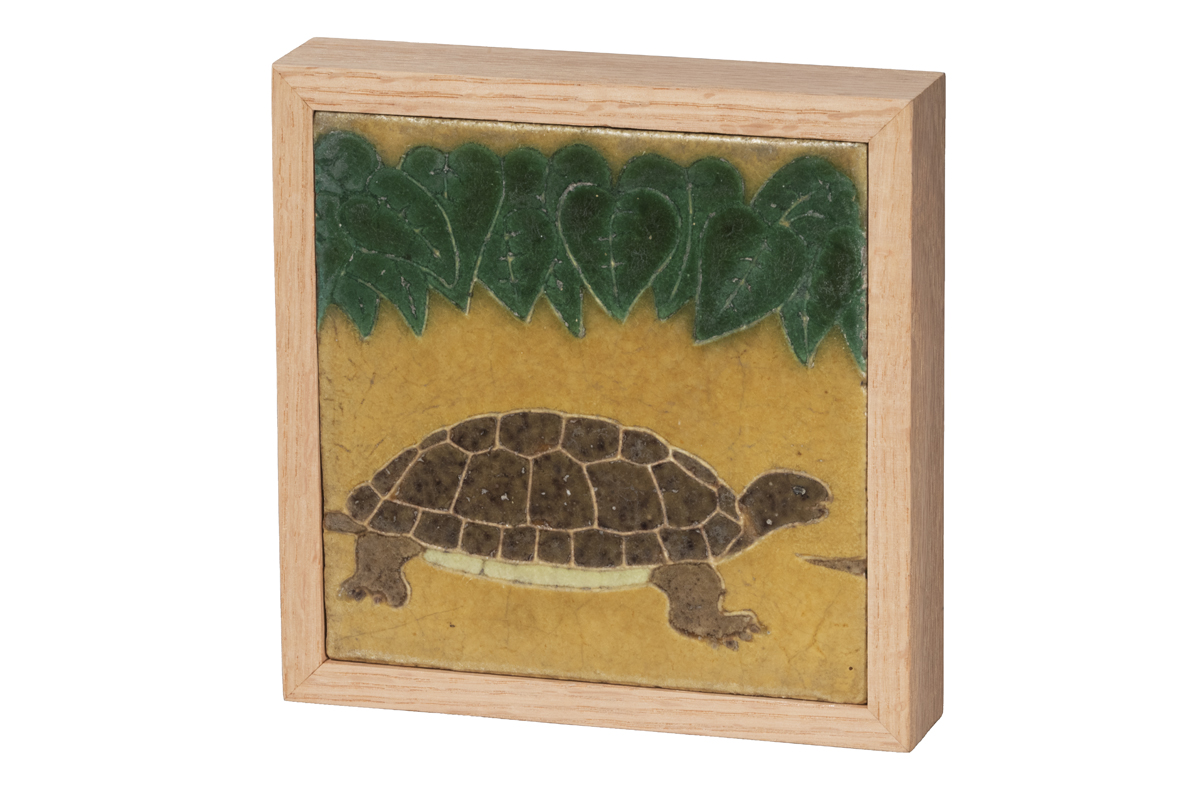 Detroit's Pewabic Pottery was founded in 1903 as part of the American Arts and Crafts movement. This vase represents naturalistic oak leaves in high relief from the surface of the vase. The matte glaze is typical of Arts and Crafts pottery. 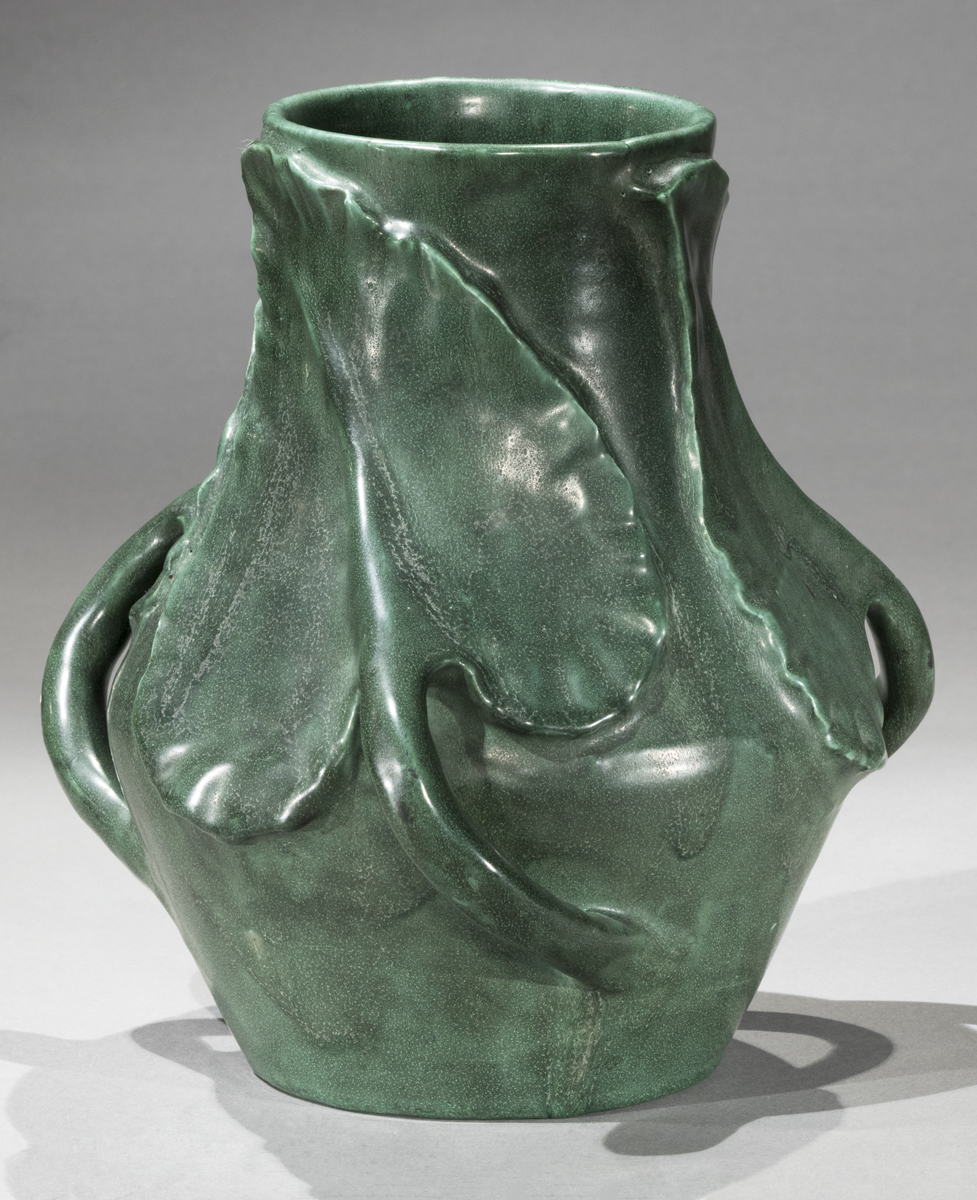 After World War I, interest in the Arts and Crafts waned, as Americans looked toward other styles like the Colonial Revival and new Art Deco for their homes. However, the concept of the multi-purpose living room persisted. 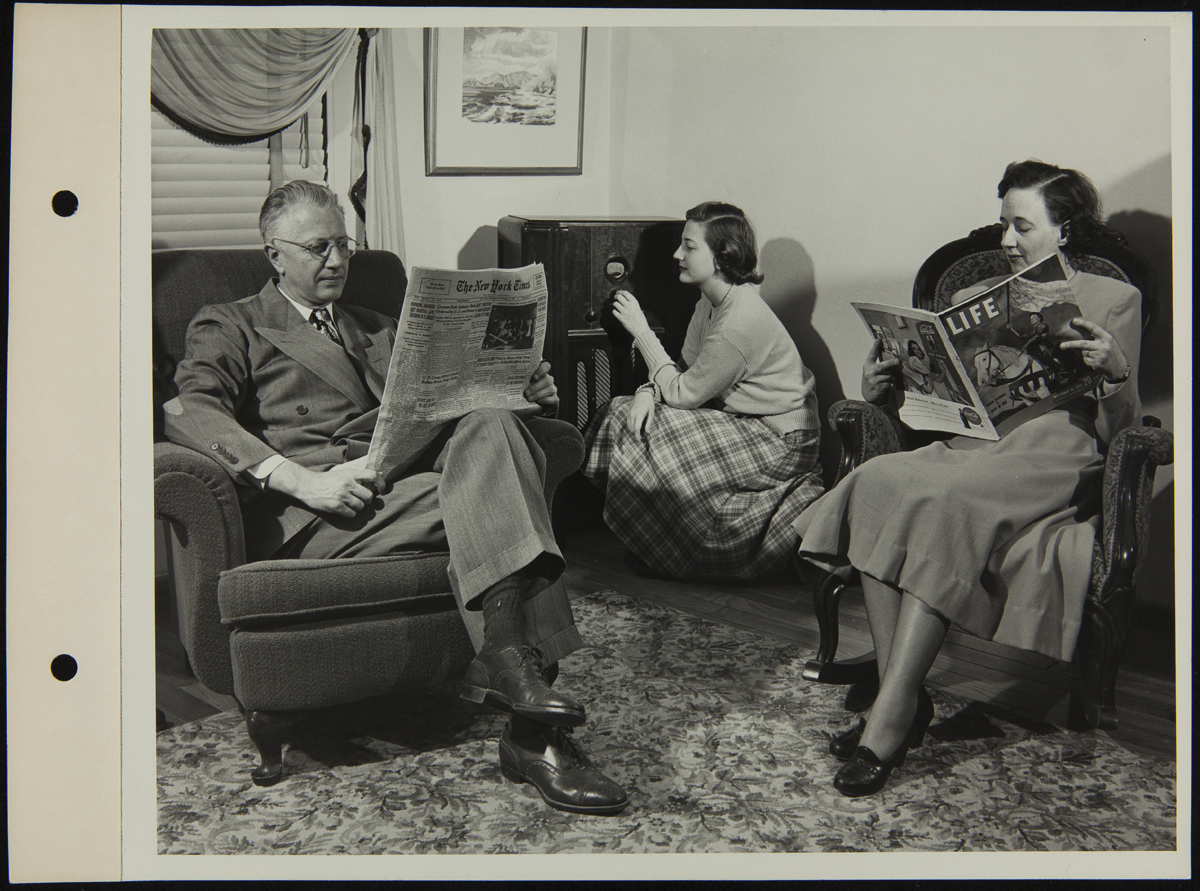 Even in high-style interiors, the open concept living room continued. 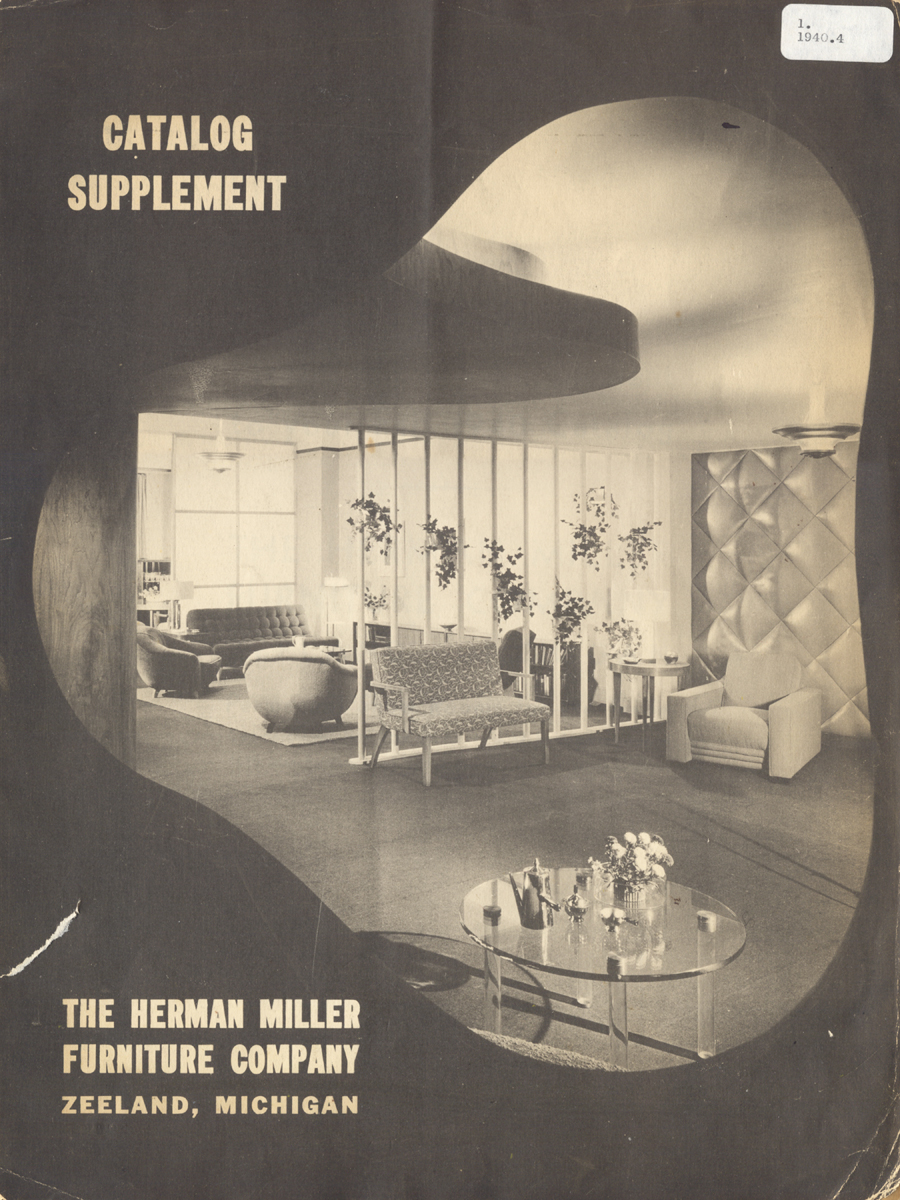 In the post-World War II era, most American homes featured a comfortable living room. In this Christmas 1962 snapshot, note the Victorian rocking chair on the right and the recliner, an updated version of the “Morris” Chair, at the left. 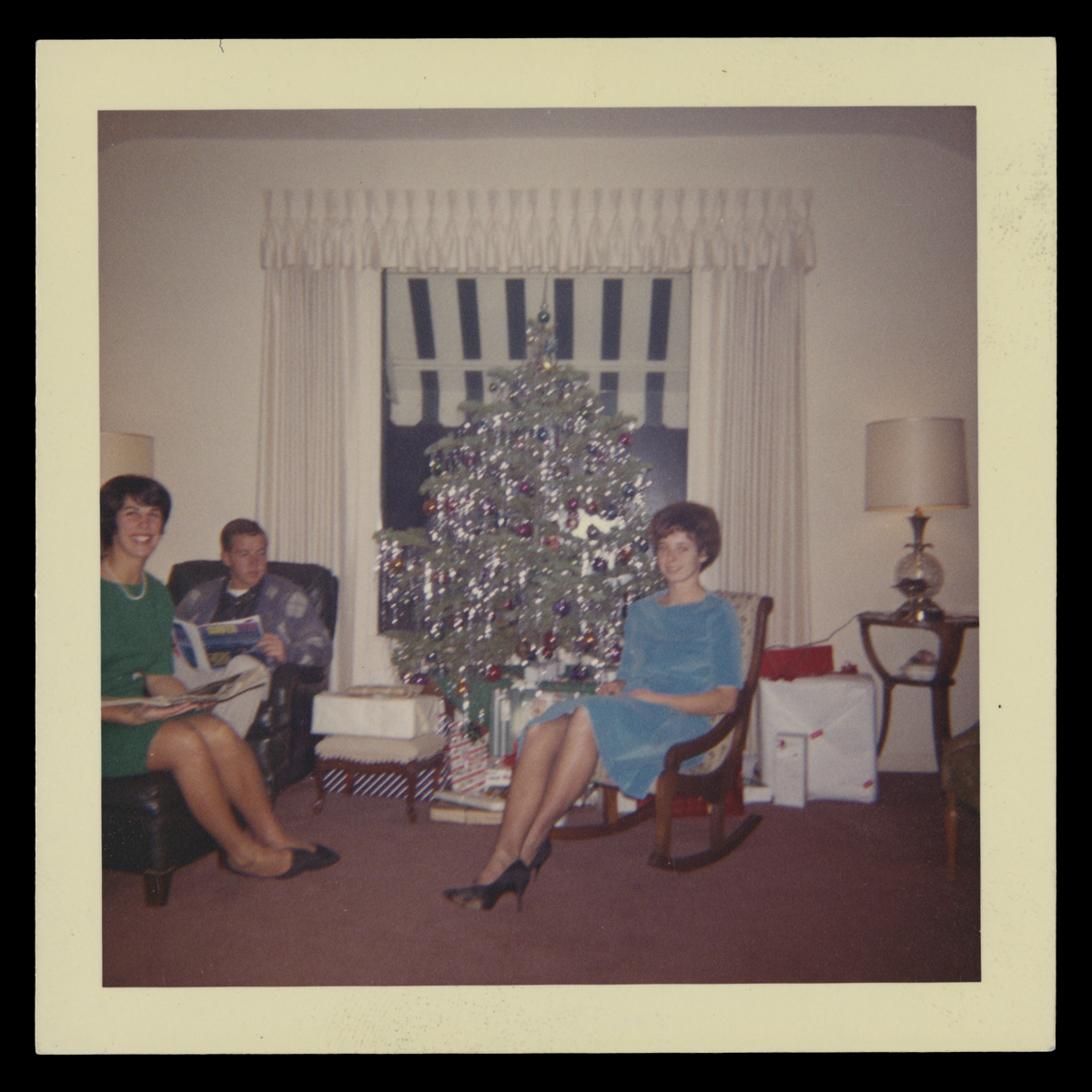 In this La-Z-Boy ad from the 1980s, we can see the influence of the Arts and Crafts movement. 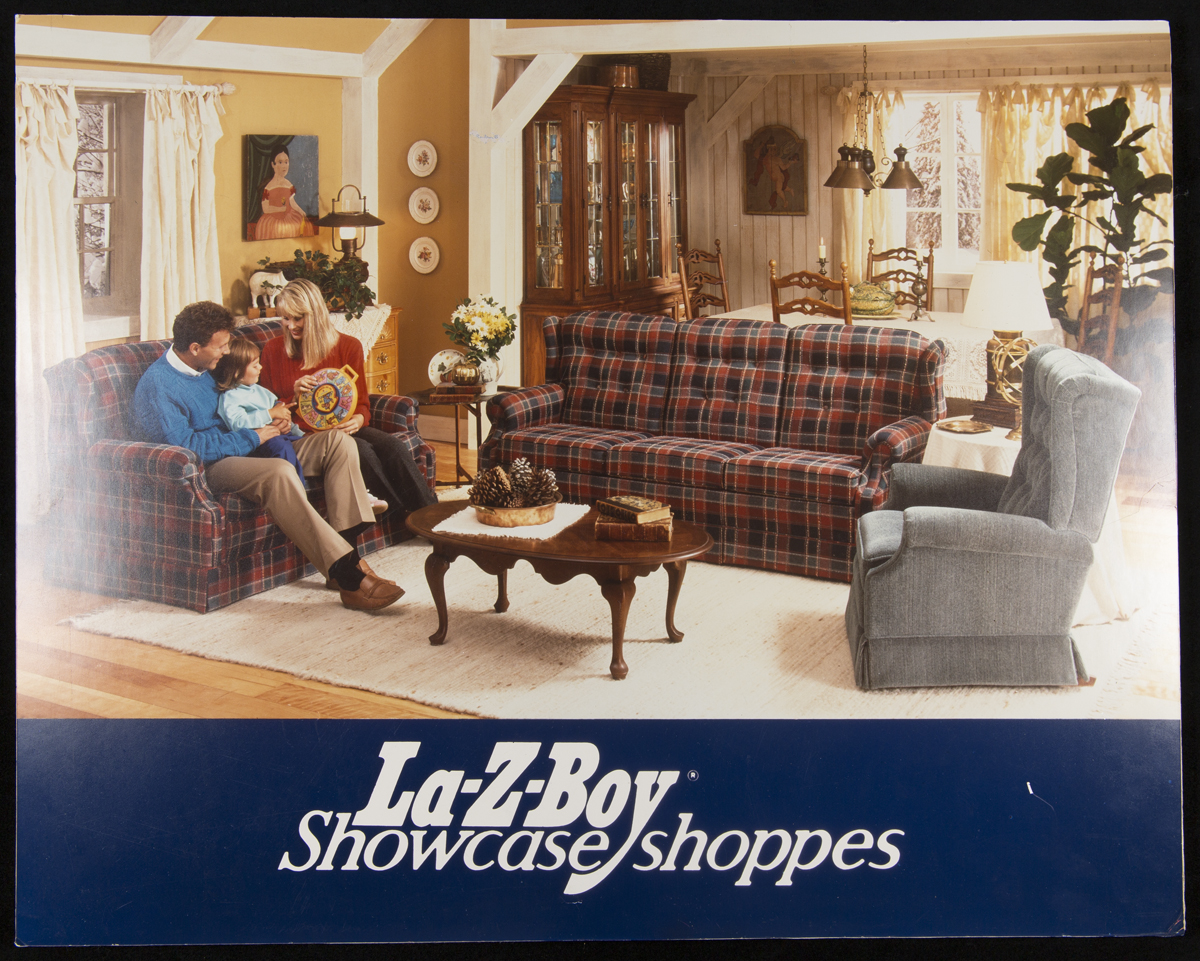 This has been a whirlwind tour of American interiors through the 19th and 20th centuries. If you’d like to learn more about the Arts and Crafts movement, check out this Expert Set and other artifacts within our Digital Collections.