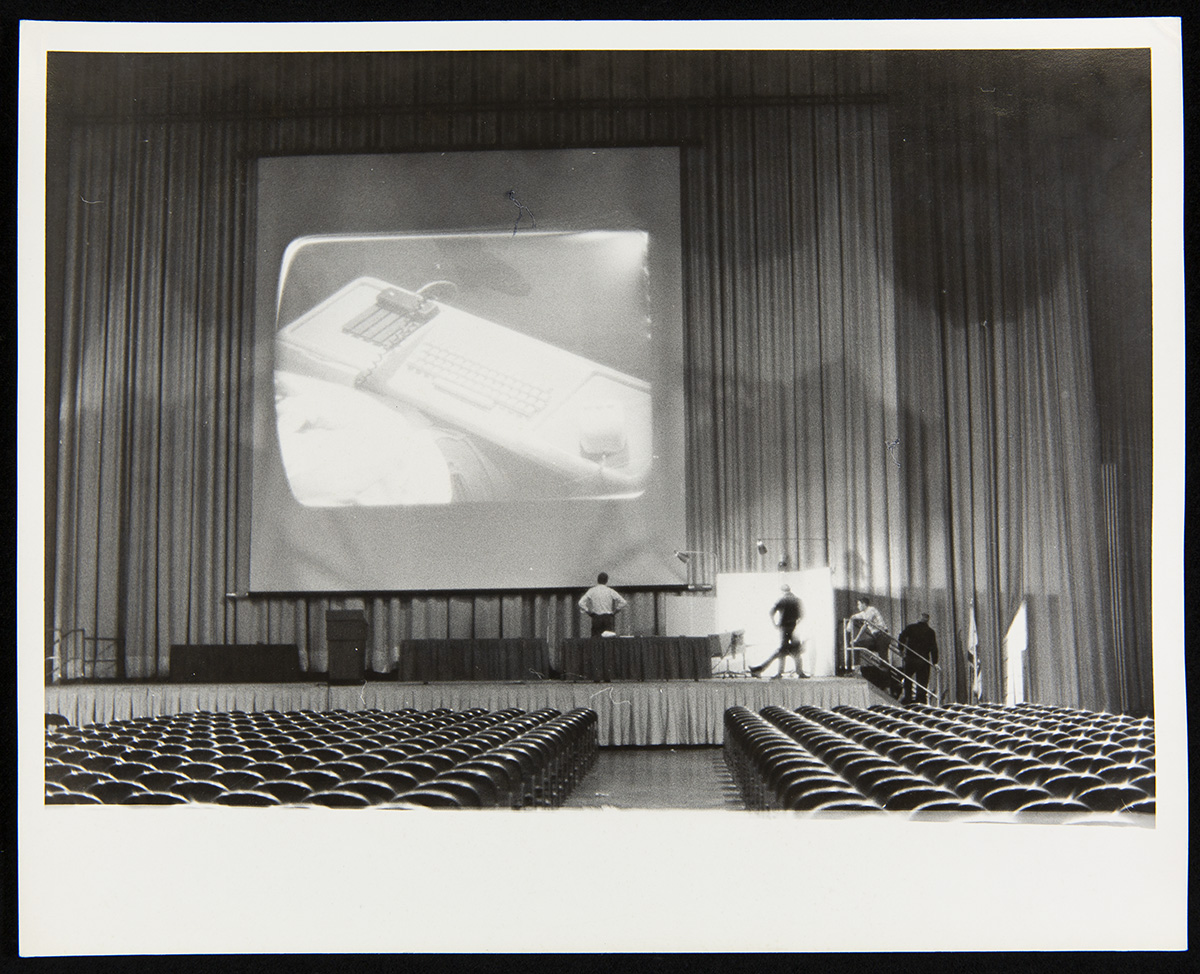 The auditorium at the 1968 Fall Joint Computer Conference before guests arrive. / THF610598

The setting is sparse. The downward sweep of theatre curtains, a man seated stage left, backed by a hinged office cubicle wall. Technology in this image is scarce, and yet it defines the moment. A video camera is perched on top of the wall, its electronic eye turned downwards to surveil a man named Douglas Engelbart, seated in a modified Herman Miller Eames Shell Chair below. A large projection screen shows a molded tray table holding a keyboard at its center, a chunky-looking computer mouse made of wood on the right side, and a “chording keyboard” on the left. Today, we take the computer mouse for granted, but in this moment, it was a prototype for the future.

The empty auditorium chairs in this image will soon be filled with attendees of a computer conference. It is easy to imagine the collective groan of theater seating as this soon-to-arrive audience leans a little closer, to understand a little better. With the click of a shutter from the back of the room, this moment was collapsed down into the camera lens of a young Herman Miller designer named Jack Kelley. He knew this moment was worth documenting because if the computer mouse under Douglas Engelbart’s right hand onstage was soon going to create “the click that was heard around the world,” this scene was the rehearsal for that moment. 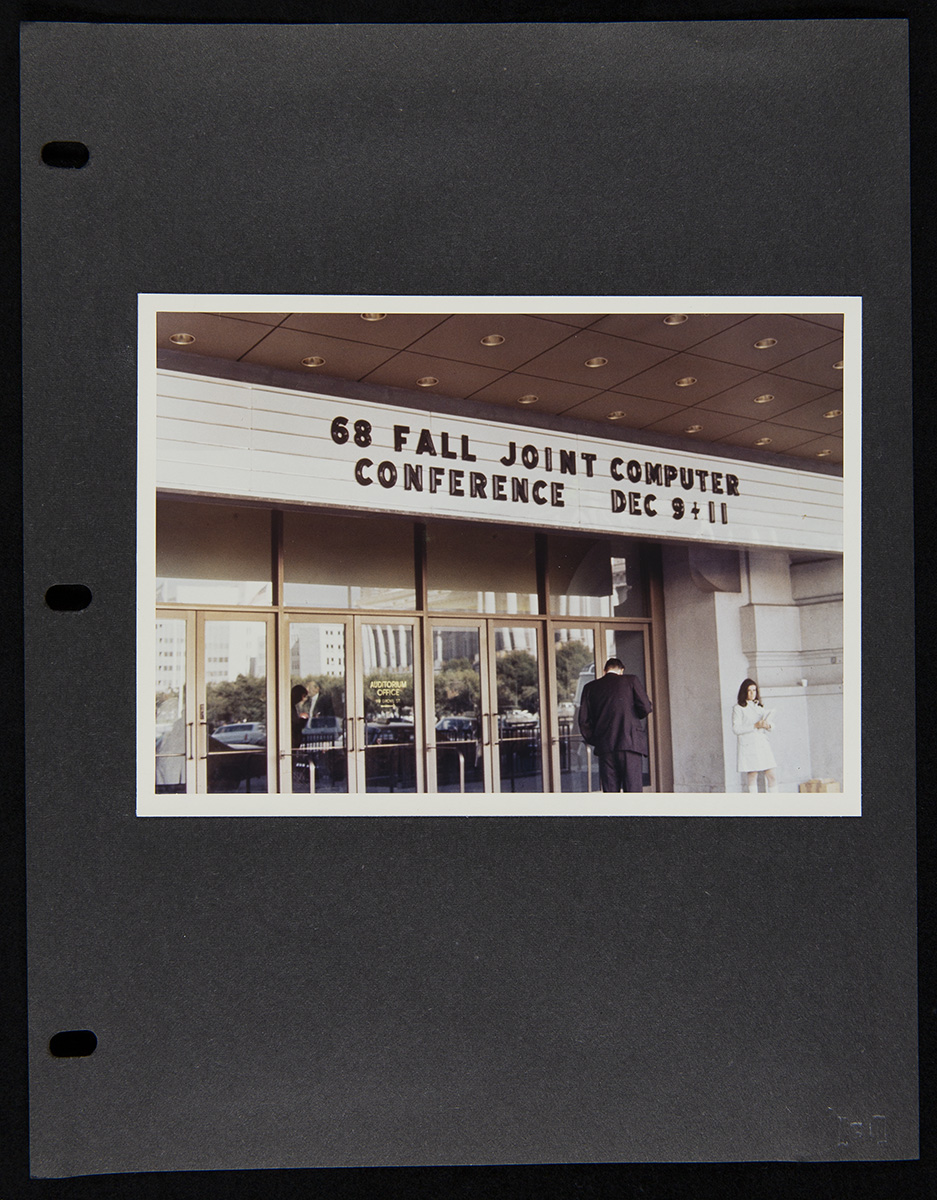 “The Mother of All Demos”

On December 9, 1968, Douglas Engelbart of the Stanford Research Institute (SRI) hosted a session at the Joint Computer Conference at the Civic Center Auditorium in San Francisco. The system presented—known as the oNLine System (or NLS)—was focused on user-friendly interaction and digital collaboration. 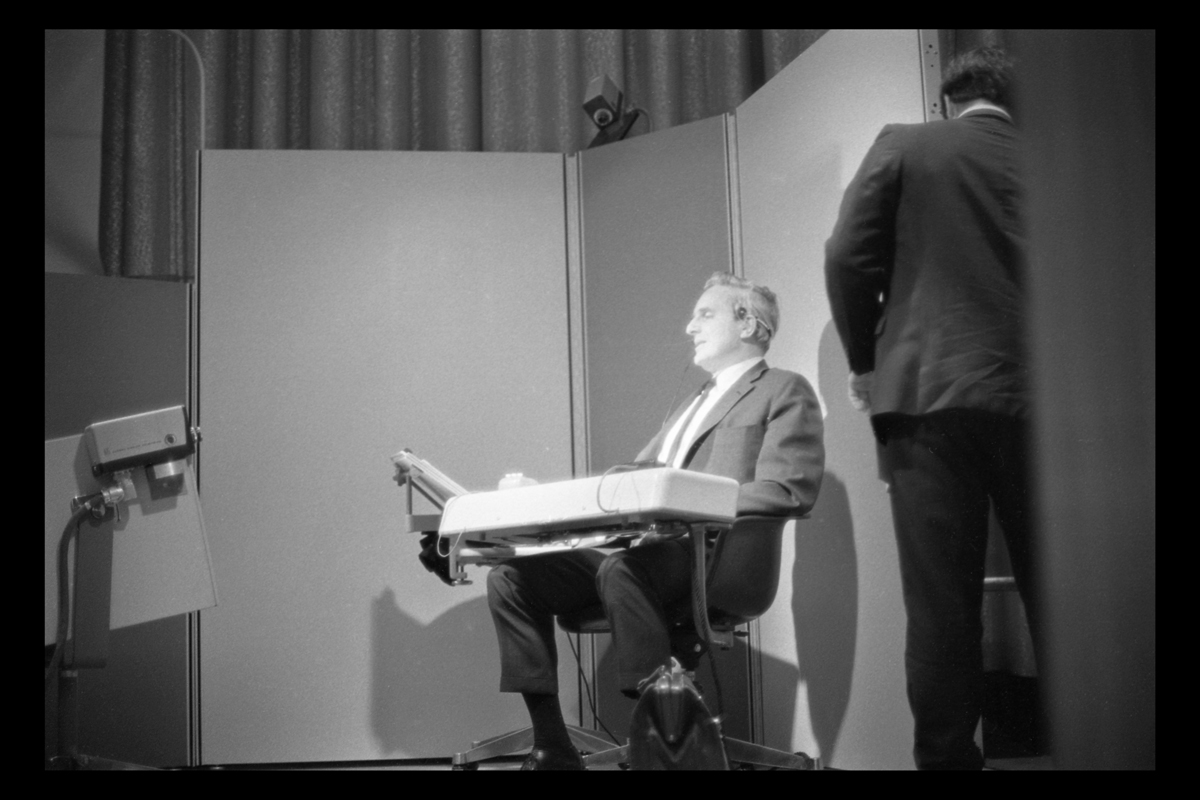 In a span of 90 minutes, Engelbart (wearing a headset like the radar technician he once was) used the first mouse to sweep through a demonstration that became the blueprint for modern computing. For the first time, computing processes we take for granted today were presented as an integrated system: easy navigation using a mouse, “WYSIWYG” word processing, resizable windows, linkable hypertext, graphics, collaborative software, videoconferencing, and presentation software similar to PowerPoint. Over time, the event gained the honorific “The Mother of all Demos.” When Engelbart was finished with his demonstration, everyone in the audience gave him a standing ovation.

In 1957, Engelbart established the Augmentation Research Center (ARC) at SRI to study the relationship between humans and machines. It was here, in 1963, that work on the first computer mouse began. The mouse was conceptualized by Engelbart and realized from an engineering standpoint by Bill English. All the while, work on NLS was percolating in the background. 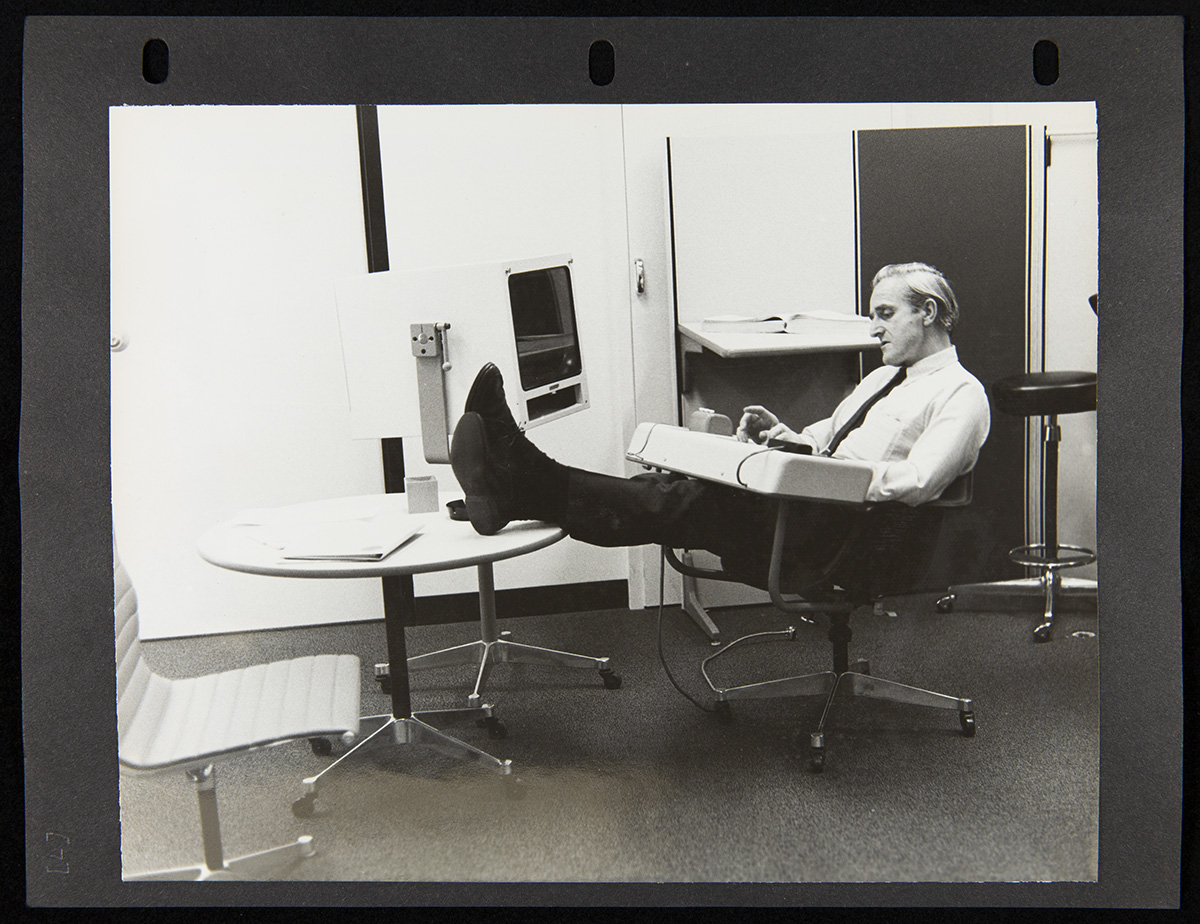 Douglas Engelbart kicks back with the NLS at the Stanford Research Institute (SRI). / THF610612

While Engelbart was gearing up to present the NLS, Herman Miller Research Corporation’s (HRMC’s) president and lead designer Robert Propst was updating the “Action Office” furniture system. Designed to optimize human performance and workplace collaboration, Action Office caught Engelbart’s attention. He was excited by its flexibility and decided to consult with Herman Miller to provide the ideal environment for people using the NLS. Propst sent a young HMRC designer named Jack Kelley to California so he could study the needs of the SRI group in person. 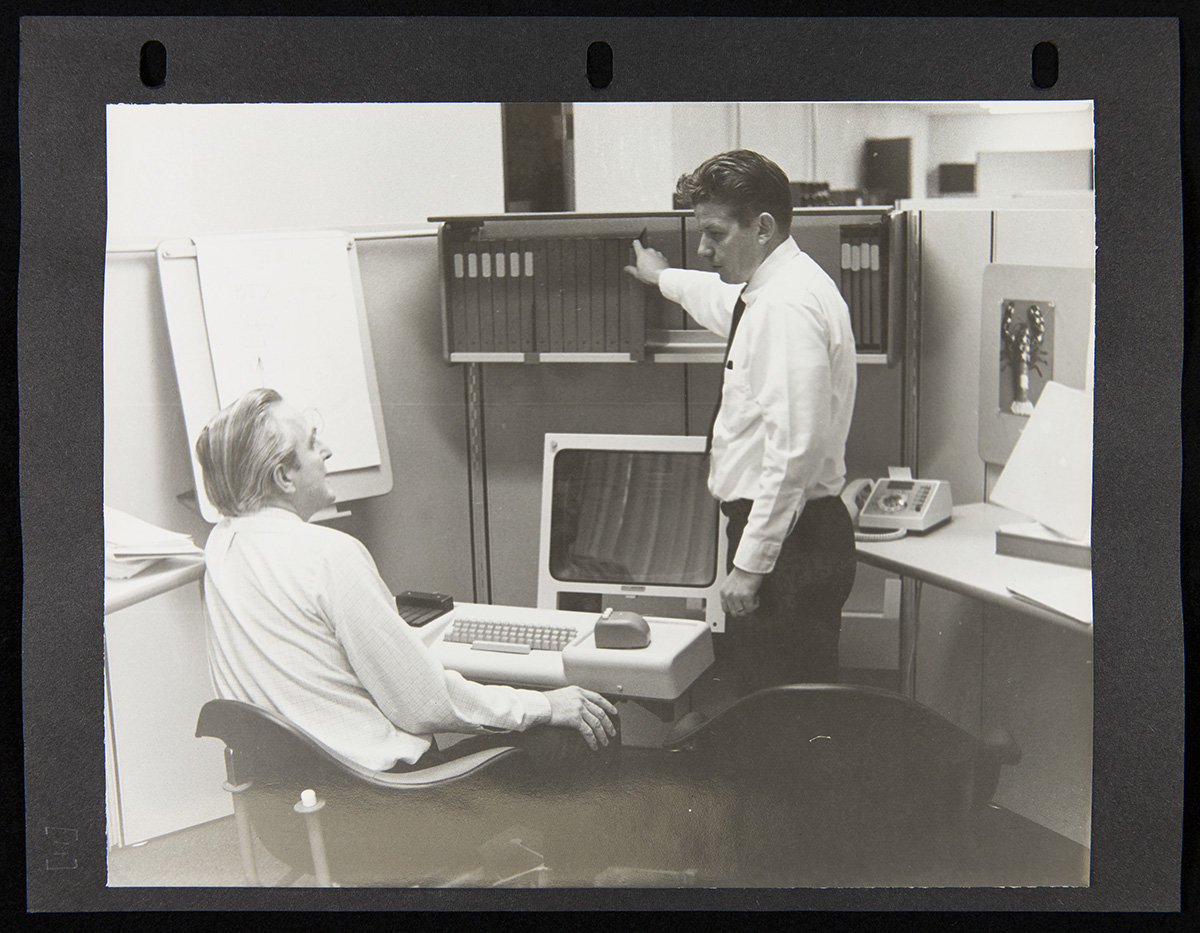 After observing and responding to the needs of the team, Kelley recommended a range of customized Action Office items, which appeared onstage with Engelbart at the Joint Computer Conference. One of the items that Kelley designed was the console chair from which Engelbart gave his lecture. He ingeniously paired an off-the-shelf Shell Chair designed by Charles and Ray Eames with a molded tray attachment to support the mouse and keyboard. This one-of-a-kind chair featured prominently in The Mother of All Demos. 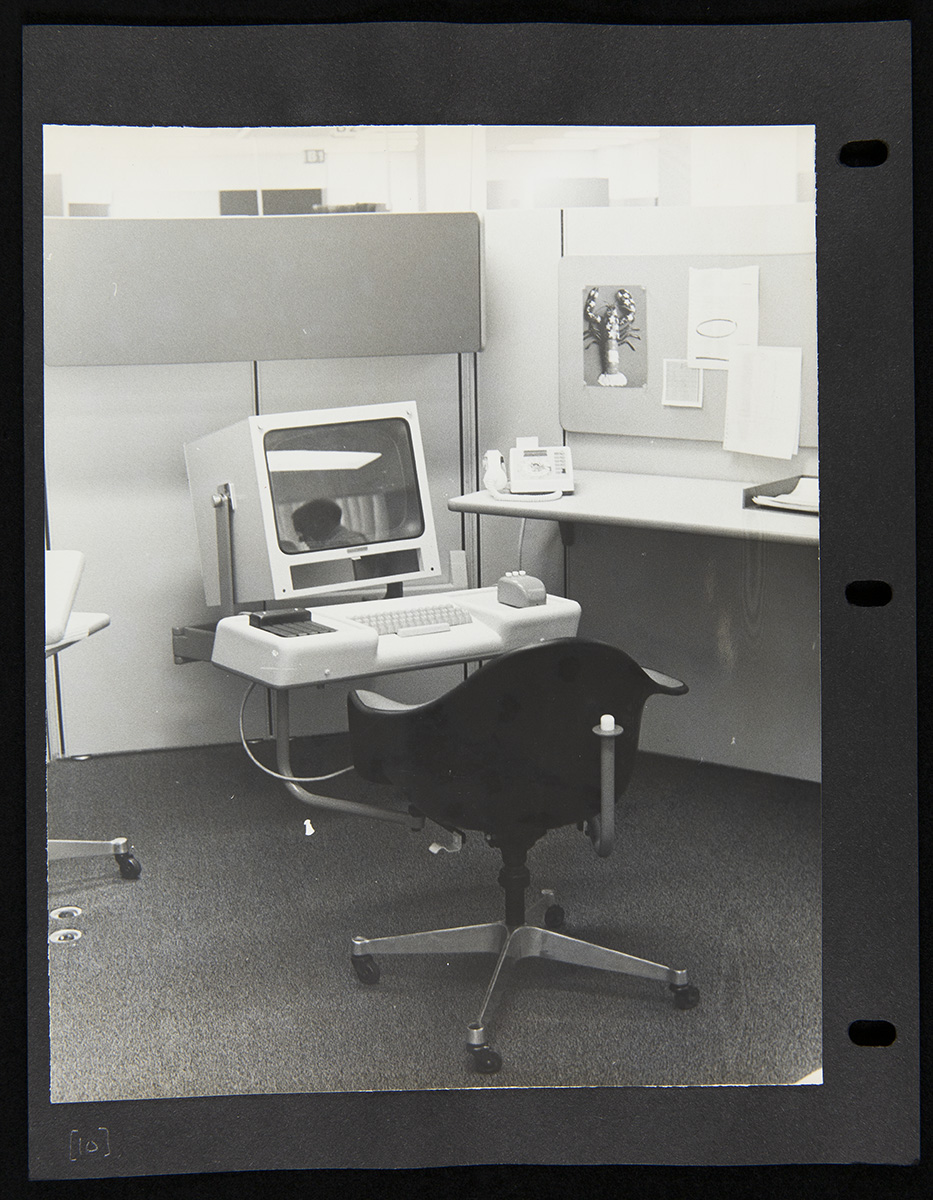 An unobstructed view of Jack Kelley’s customization of an Eames Shell Chair with removable, swinging tray for the NLS. The chording keyboard is visible at left, and the prototype mouse is at right. / THF610615

During the consultation, Kelley also noticed that Engelbart’s mouse prototype had difficulty tracking on hard surfaces. He created a “friendly” surface solution by simply lining the right side of the console tray with a piece of Naugahyde. If Engelbart was seen to be controlling the world’s first mouse onstage in 1968, Kelley contributed one very hidden “first” in story of computing history too: the world’s first mousepad. Sadly, the one-of-a-kind chair disappeared over time, but luckily, we have many images documenting its design within The Henry Ford’s archival collections. 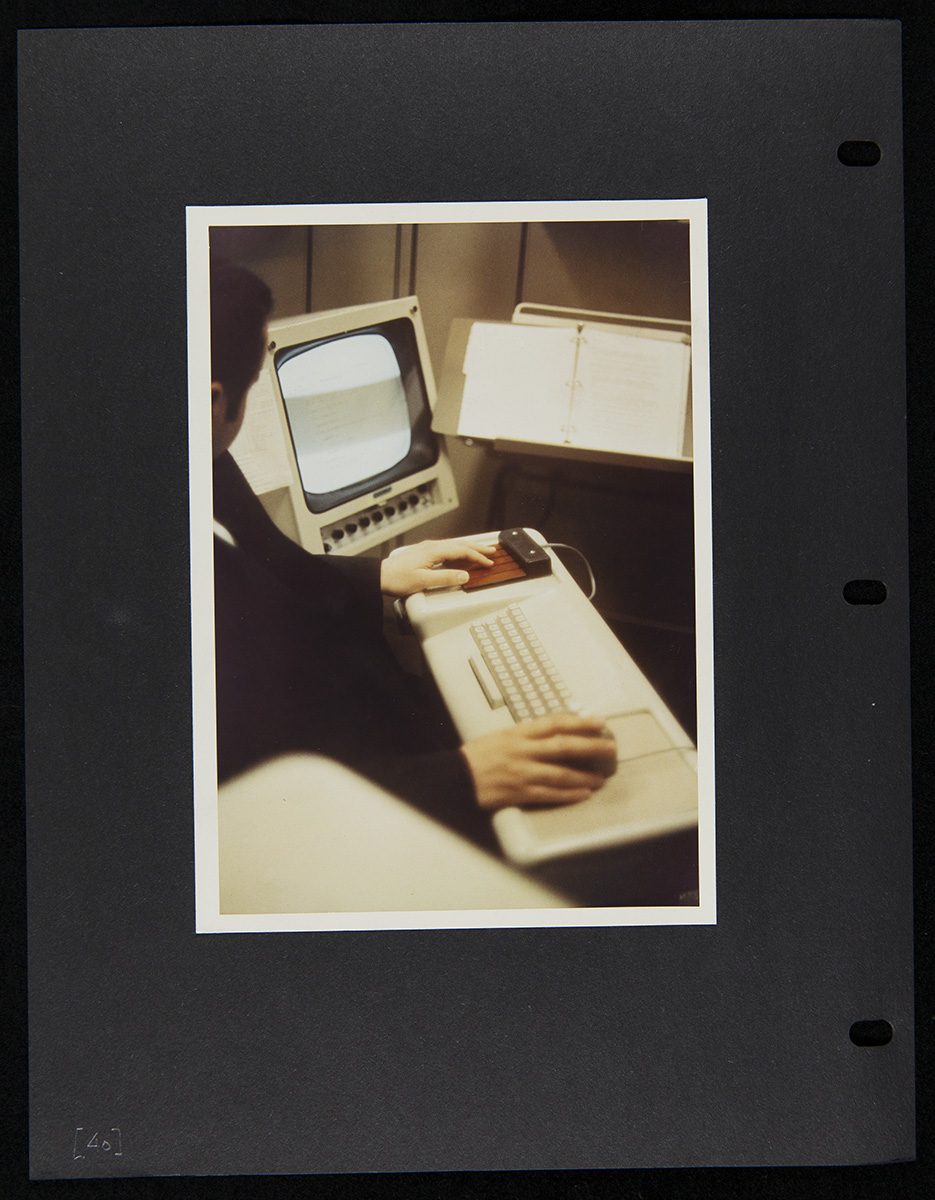 A closer view of the world’s first mousepad – the beige square of Naugahyde inset into the NLS tray at bottom right. / THF610645

The computer scientist Mark Weiser said, “the most profound technologies are the ones that disappear. They weave themselves into the fabric of everyday life until they are indistinguishable from it.” If this is true, the impact of Engelbart’s 1968 demonstration—supported by Kelley’s console chair and mousepad—are hidden pieces of the computing history. So as design shaped the computer, the computer also shaped design.