The Scottie Dog: Icon of an Age

During the 1930s and 1940s, Scottish Terriers, or “Scotties,” popped up all over popular culture, from jewelry to ceramics to greeting cards. I've found various types of Scottie memorabilia in The Henry Ford's collections of this period. The question is, why were Scotties so popular?

According to the American Kennel Club, Scottish Terriers first became popular in America in the early 20th century, with the “Golden Age” arriving in the 1930s. This may be due to the personality of Scotties. The American Kennel Club references this description of the Scottish Terrier’s temperament: “Contented in his ways, conscious of the affection he bears to master or mistress, he regards life philosophically, takes the best when he can get it, makes the best when he cannot.”

Of course, the 1930s represents one of the most desperate economic periods in American history: the Great Depression. It makes perfect sense that Americans loved the spirited Scottie during this dark time.

Also, celebrities as diverse as Bette Davis, Dorothy Parker, Charles Lindbergh and Anne Morrow Lindbergh, and Humphrey Bogart adopted Scotties and helped make them popular—both as pets and on memorabilia.

Some of the most common places that they appear are in Christmas cards. 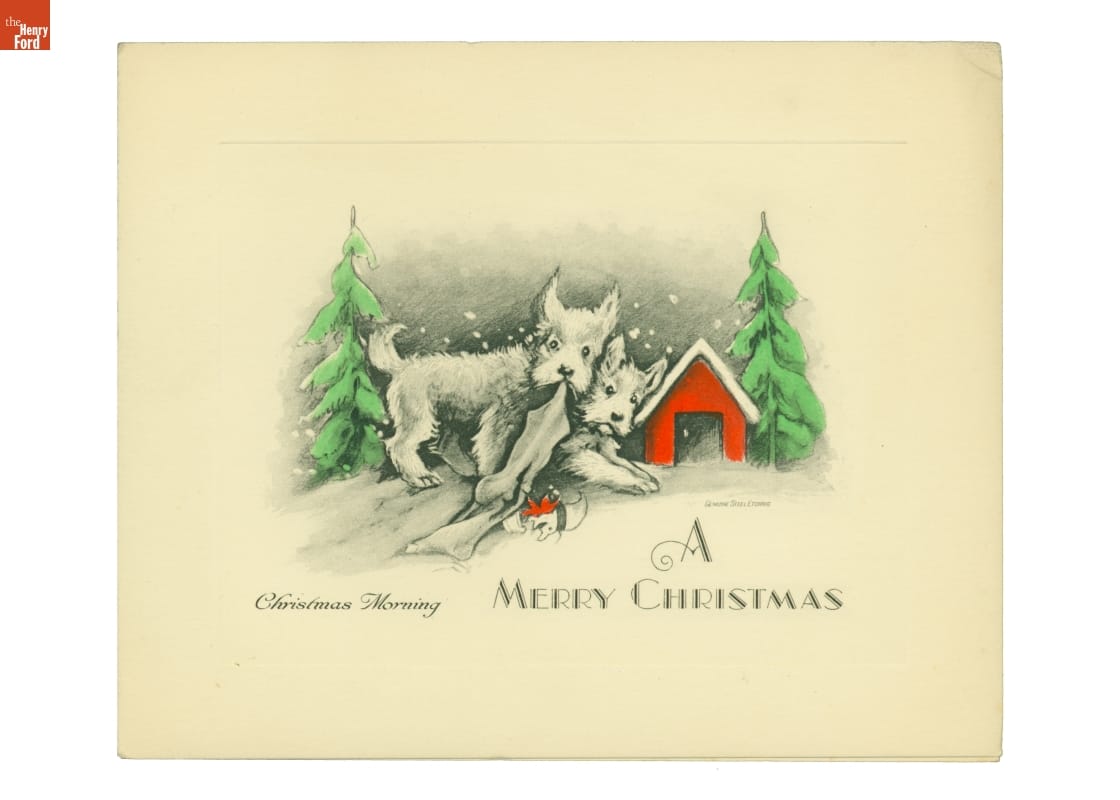 This card shows a pair of mischievous Scotties, one of whom shows us a Christmas stocking with a puppet tumbling out of it. 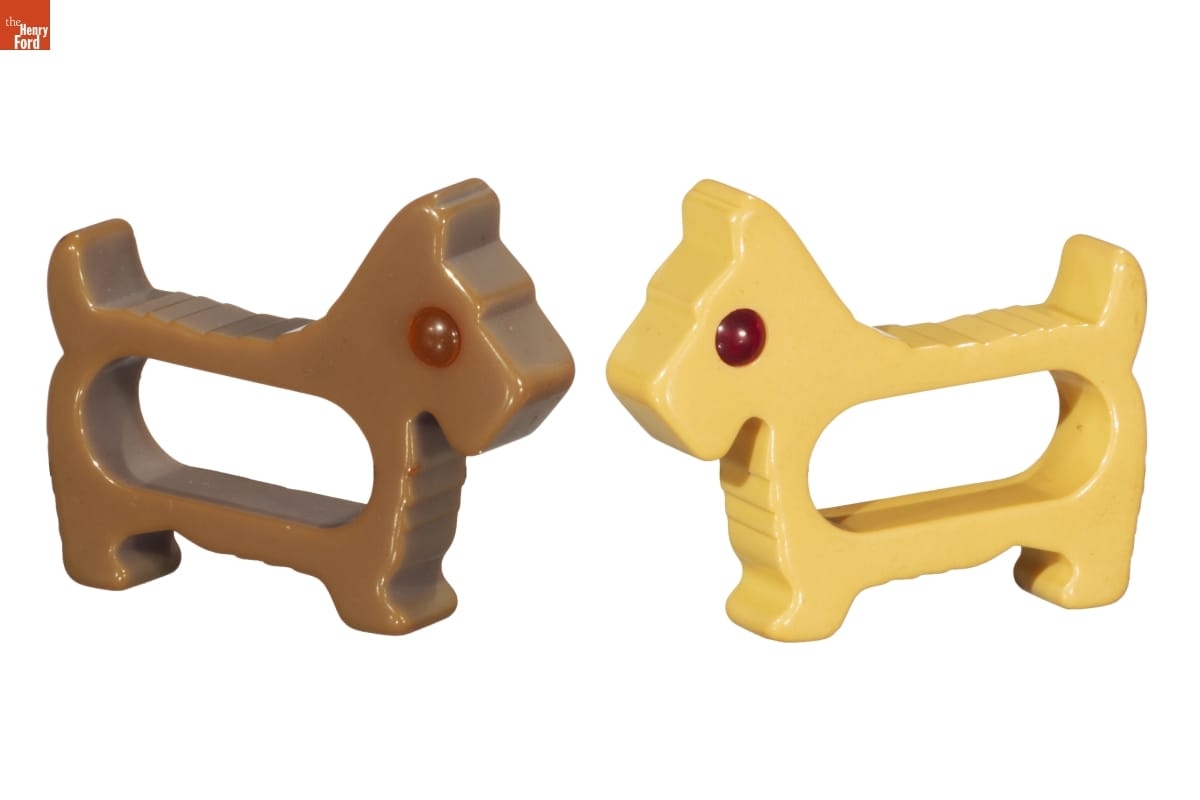 Plastics were used for inexpensive items such as these adorable napkin rings, likely purchased at a five-and-ten-cent store. They would have brightened up a Depression-era dining room table. 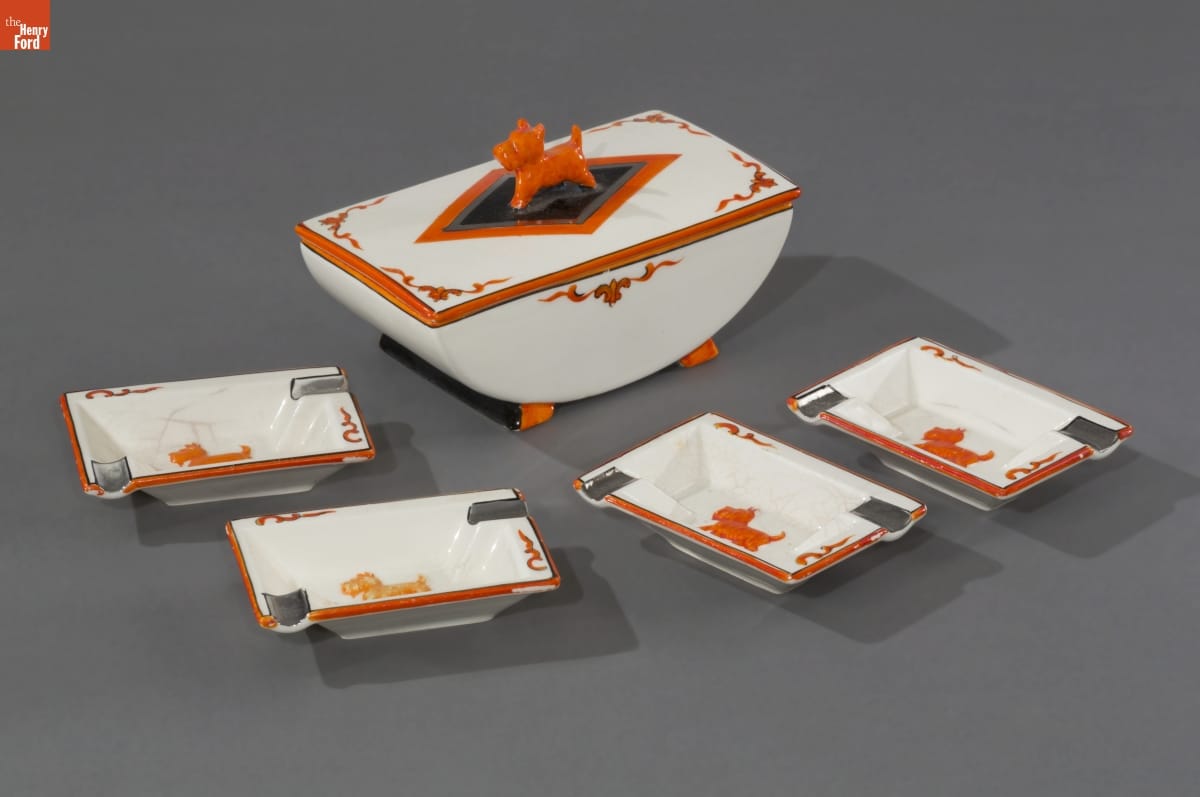 This inexpensive, yet fashionable, ceramic cigarette set, like the napkin rings, was likely retailed at a five-and-ten-cent store. It would have been a novelty or conversation piece in a middle-class living room.

Fala: The Most Famous Presidential Pet 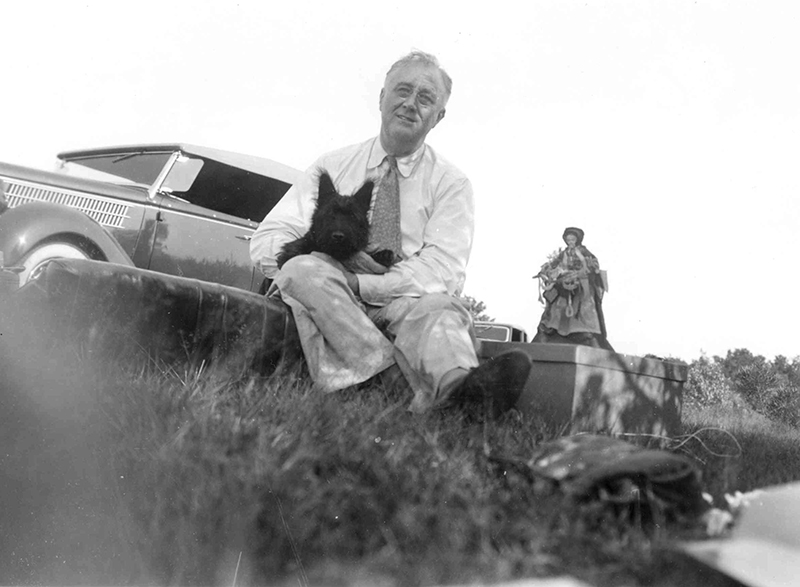 The photograph above shows President Franklin Delano Roosevelt with his new Scottish Terrier, Fala, a gift from Roosevelt’s cousin, Margaret “Daisy” Suckley. Was Roosevelt aware of the popularity of Scotties, or was it just serendipity? Probably a little of both. Fala was named by Roosevelt after a Scottish ancestor, the “outlaw” John Murray of Falahill. “Murray the Outlaw of Falahill” was soon shortened to “Fala,” and like his namesake, the Scottie's legend grew. Fala’s adorable antics soon made him popular, and perhaps beloved, by the White House press corps. 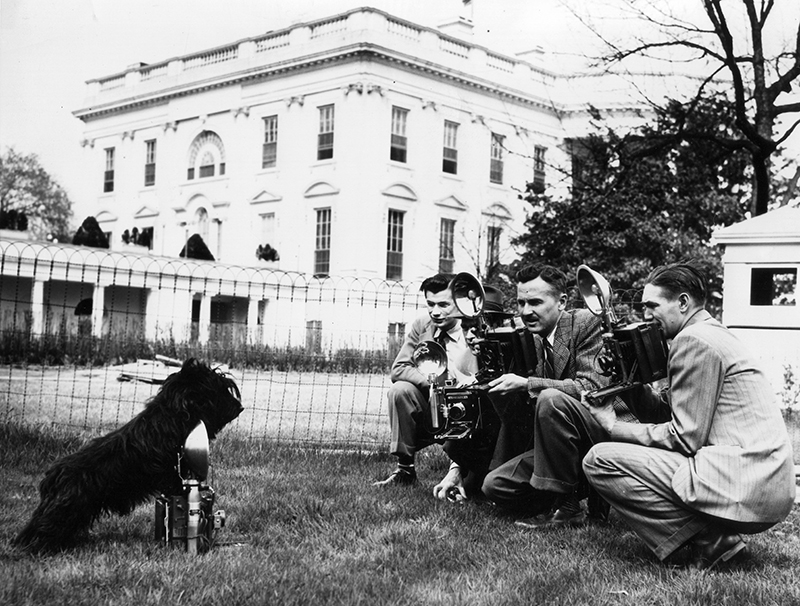 Fala and the Barkers for Britain Campaign

As you can see, Fala’s instant fame, plus national interest in Scottish Terriers, created a public relations bonanza. During 1941, as World War II raged in Europe, the Roosevelt administration sought to help Great Britain, the lone country in Western Europe left standing against the forces of Nazi Germany. Although the United States was officially neutral, many Americans sympathized with and sought to aid the British. They were led by the British War Relief Society, an umbrella organization based in New York City. A constituent group called “Bundles for Britain” collected clothing and money for humanitarian aid. “Barkers for Britain” was created for dog lovers, with paid memberships benefiting the Bundles group. For a fee of 50 cents, dog owners could get a tag with their dog’s name inscribed with a Barkers for Britain label. President Roosevelt volunteered Fala as president of the group, and Fala got membership tag number one. 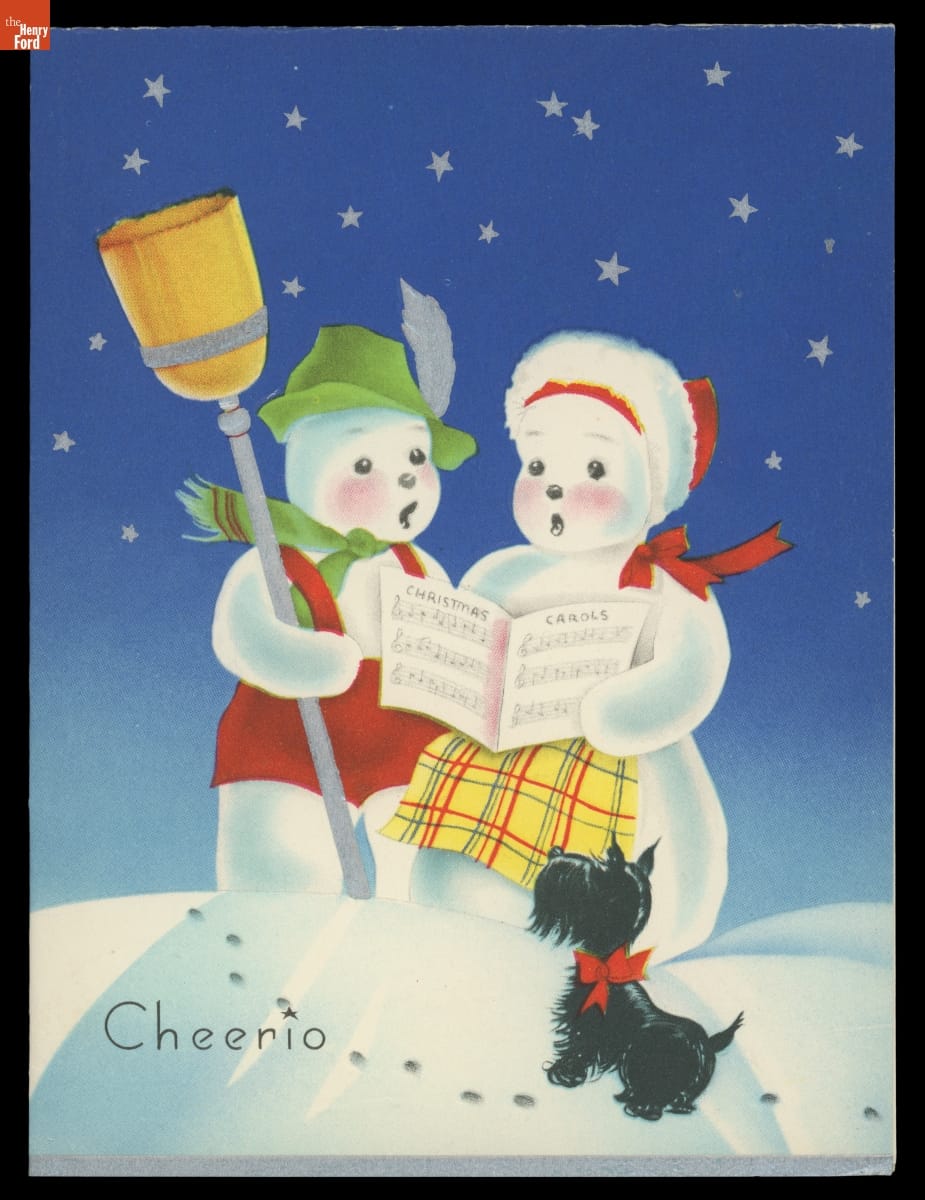 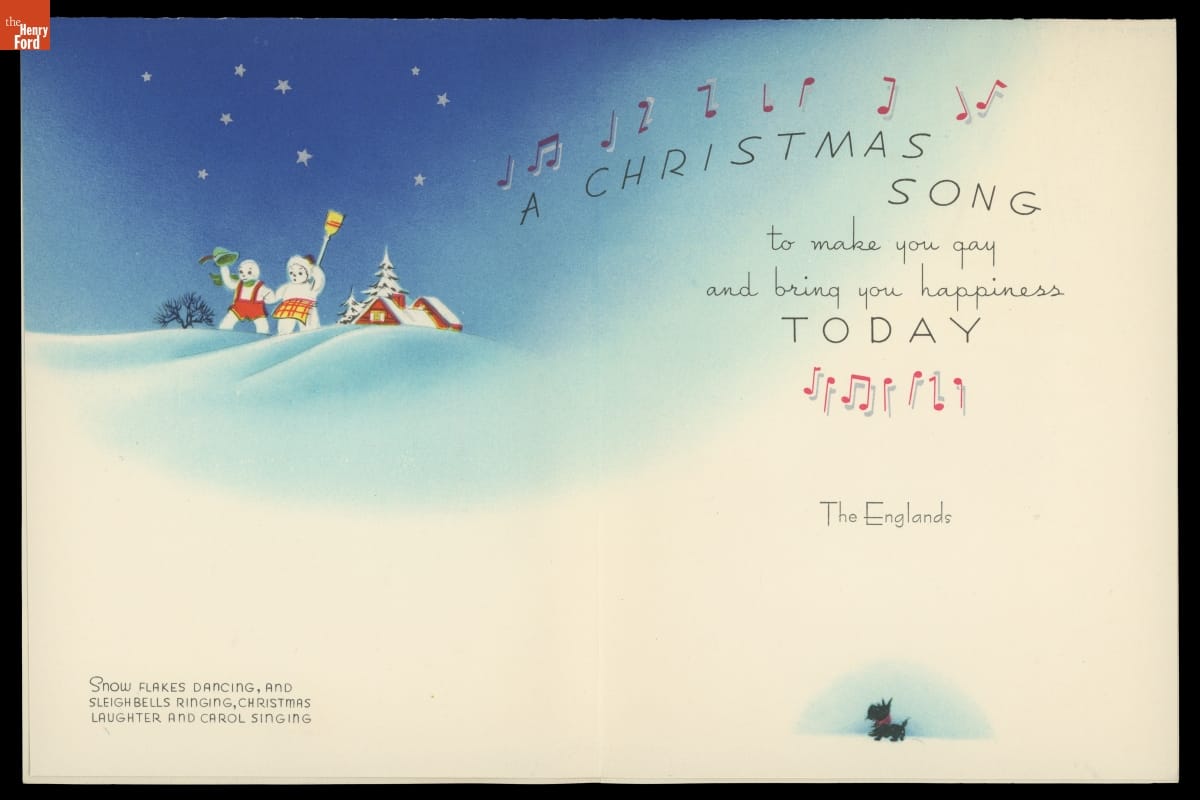 Dating to 1941, this Christmas card references Scottish Terriers and Britain, with “Cheerio” on the outside and “The Englands” on the inside.

As a favorite companion, Fala was constantly by Roosevelt’s side. He traveled everywhere with the president. In the late summer of 1944, with the United States now fully engaged in World War II, Fala accompanied Roosevelt on the USS Baltimore to Hawaii, where Roosevelt met with General Douglas MacArthur and Admiral Chester Nimitz on plans to retake the Philippines and attack the Japanese mainland. The Baltimore then traveled to the Aleutian Islands off the coast of Alaska, where Roosevelt met with local leaders on asserting American control over islands that had been taken by the Japanese early in the war. The ship returned to the American mainland via Seattle, where Roosevelt and Fala took a train back to Washington, D.C.

In 1944, a presidential election year, Roosevelt was seeking an unprecedented fourth term. Republicans sought any “dirt” they could find on Roosevelt, an extremely popular Democrat and president since 1933. It is unclear how the rumor got started, but Republicans began circulating a story that Fala had been left behind in the Aleutian Islands and a destroyer had been sent from Seattle, at taxpayers’ expense, to retrieve him. Roosevelt was accused of wasting some 20 million dollars in this effort. Ever the canny politician, the president used this to his advantage. Speaking to the Teamsters Union while kicking off his reelection campaign, Roosevelt gave a speech that many say ensured his reelection. Here is an excerpt:

"These Republican leaders have not been content to make personal attacks upon me—or my wife or my sons—they now include my little dog, Fala. Unlike the members of my family, Fala resents this. When he learned that the Republican fiction writers had concocted a story that I had left him behind on an Aleutian Island and had sent a destroyer back to find him—at a cost to the taxpayer of two or three or twenty million dollars—his Scottish soul was furious! He has not been the same dog since."

Not only did Roosevelt get a positive reaction from his Teamster audience, but he was also heard on radio from coast to coast. The voting public realized that the president still had fight in him and that his feisty little dog was a great asset. As part of the Roosevelt campaign, young girls began sporting Scottie dog pins, like this one. 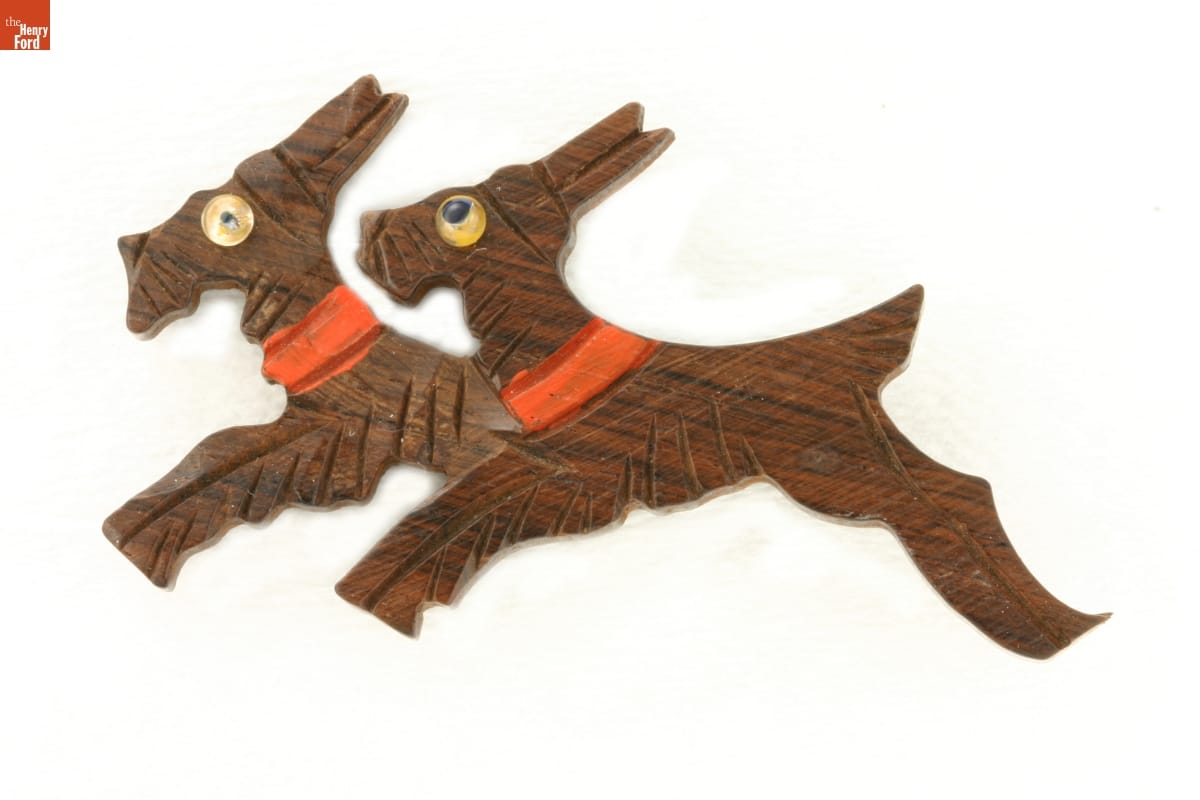 In a broader context, Fala started the tradition of presidential pets serving as surrogates in the political arena. Some notable examples include Richard Nixon’s famous “Checkers” speech in 1952 and Socks the cat, the pet of Chelsea Clinton, daughter of Bill Clinton, in the 1990s. Nearly every president since 1944 has attempted to promote his pets, but none have done so as deftly as Roosevelt. 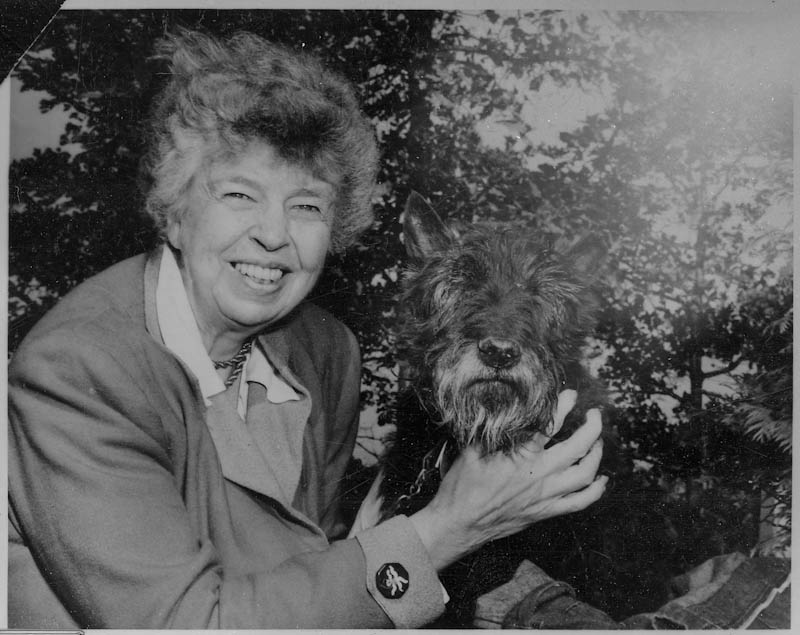 After Roosevelt’s sudden death in April of 1945, Fala lived with Eleanor Roosevelt at the family’s Hyde Park, New York, home until the dog’s own death in 1952. At Roosevelt’s memorial in Washington, D.C., the president is depicted with Fala at his side. 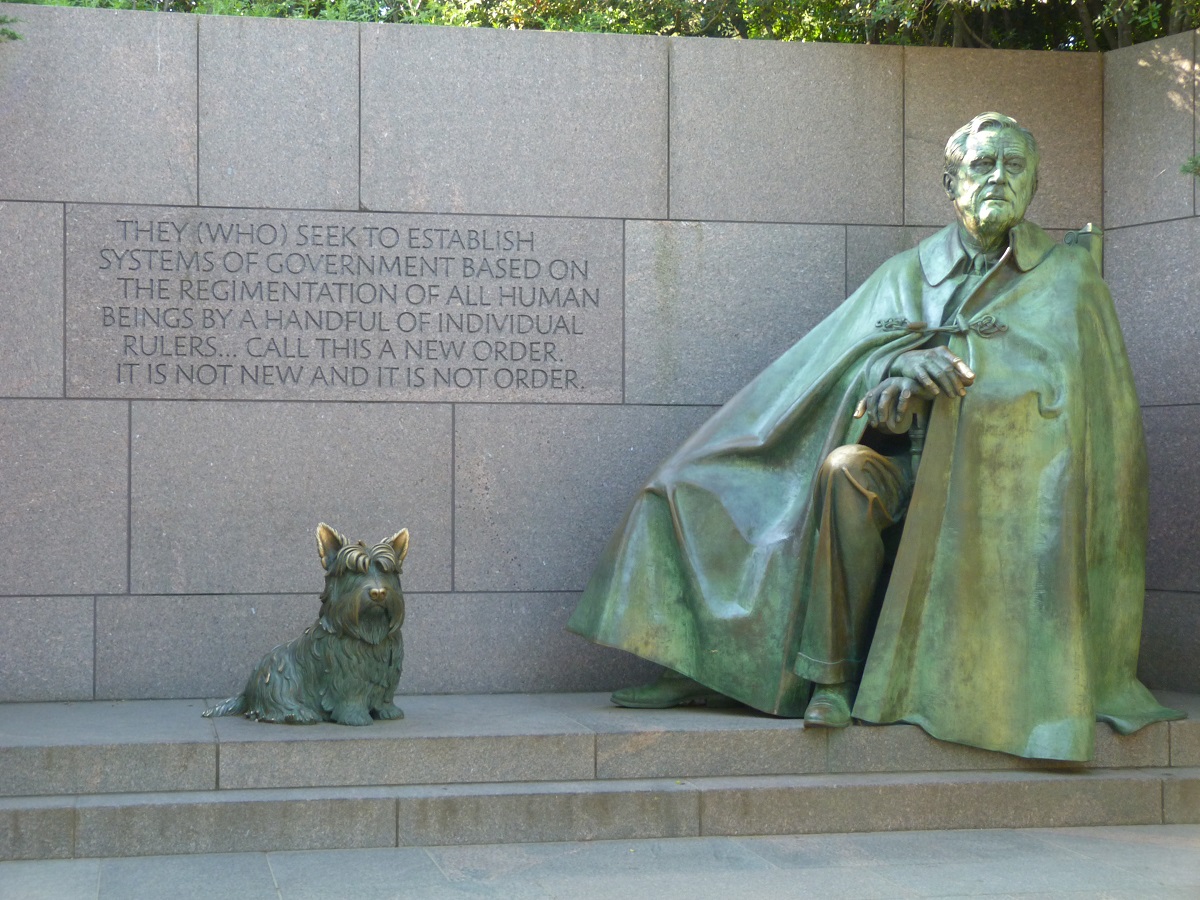 The Scottie dog is truly a reflection of American life at a difficult period, when tenacity, good spirits, and a can-do mentality helped the nation survive and ultimately prosper.