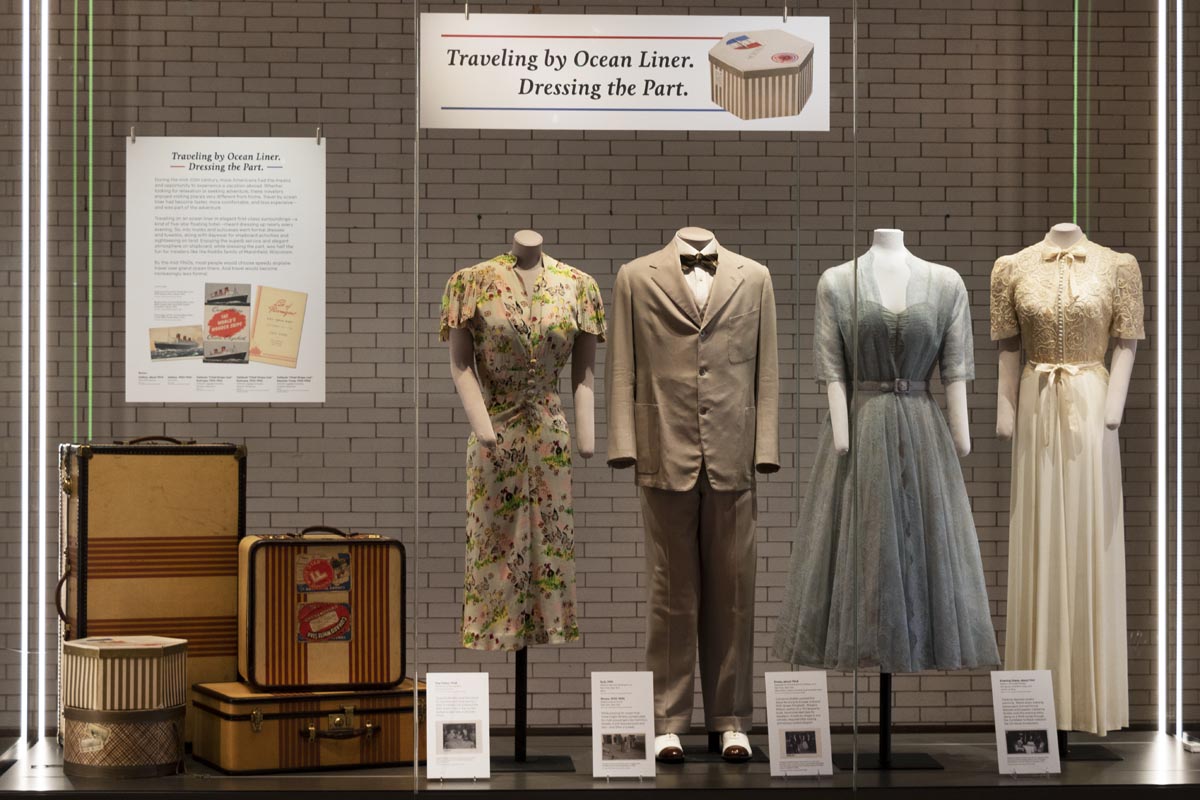 Our latest installation of What We Wore: Traveling by Ocean Liner. / THF190376

The current What We Wore exhibit in Henry Ford Museum of American Innovation features garments worn by the Roddis family of Marshfield, Wisconsin, while traveling by ocean liner. 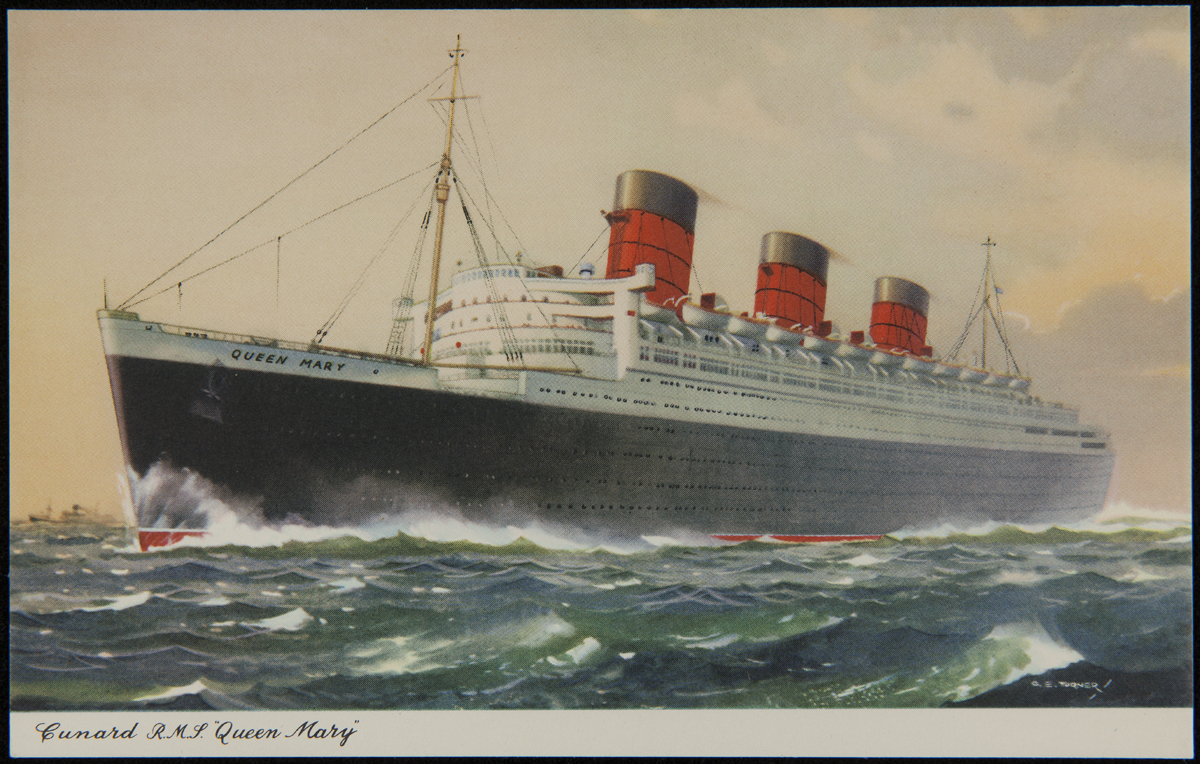 During the mid-20th century, more Americans had the means and opportunity to experience a vacation abroad. Whether looking for relaxation or seeking adventure, these travelers enjoyed visiting places very different from home. Travel by ocean liner had become faster, more comfortable, and less expensive—and was part of the adventure. 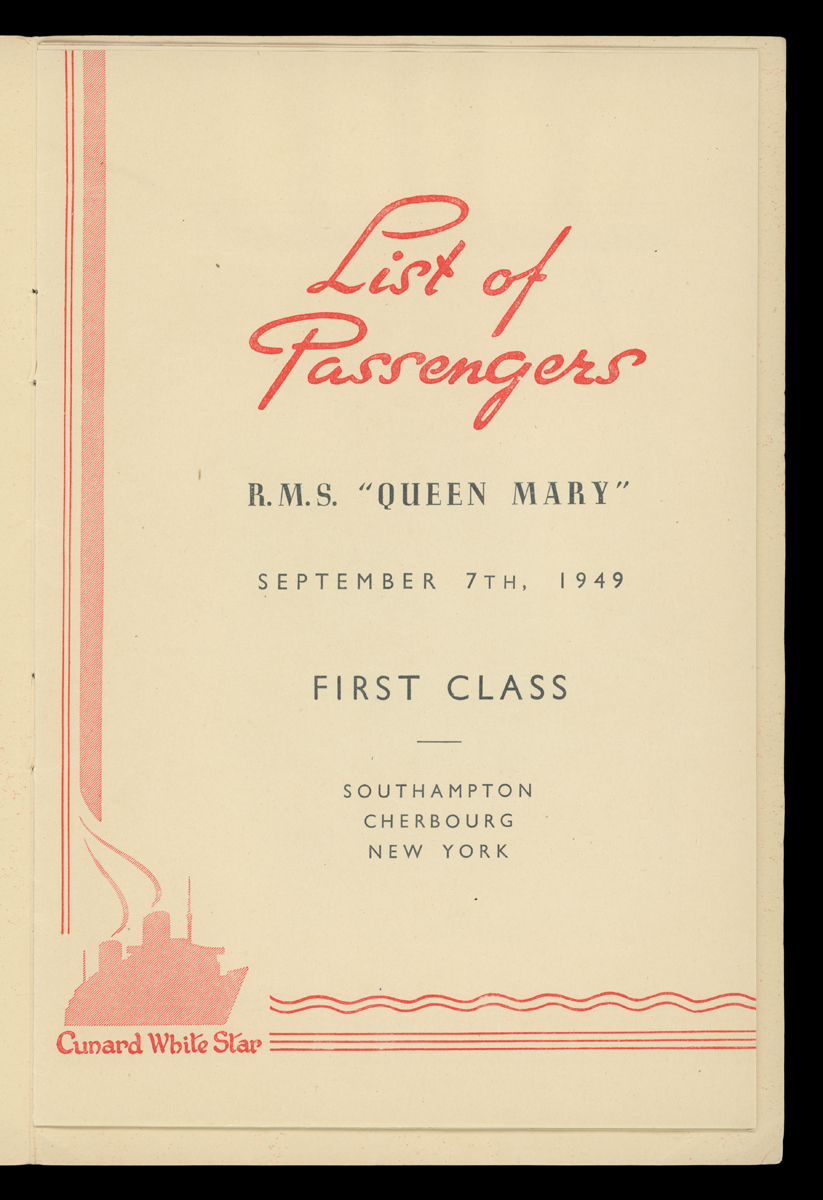 Traveling on an ocean liner in elegant first-class surroundings—a kind of five-star floating hotel—meant dressing up nearly every evening. So, into trunks and suitcases went formal dresses and tuxedos, along with daywear for shipboard activities and sightseeing on land. Enjoying the superb service and elegant atmosphere on shipboard—while dressing the part— was half the fun for travelers like the Roddis family of Marshfield, Wisconsin.

By the mid-1960s, most people would choose speedy airplane travel over grand ocean liners, and travel would become increasingly less formal.

Packing for ocean liner travel required careful planning. Nearly every evening, passengers donned formal dresses and tuxedos. Catherine Roddis took the evening dress below along on a 1948 cruise through the Caribbean to Brazil onboard the SS Nieuw Amsterdam. 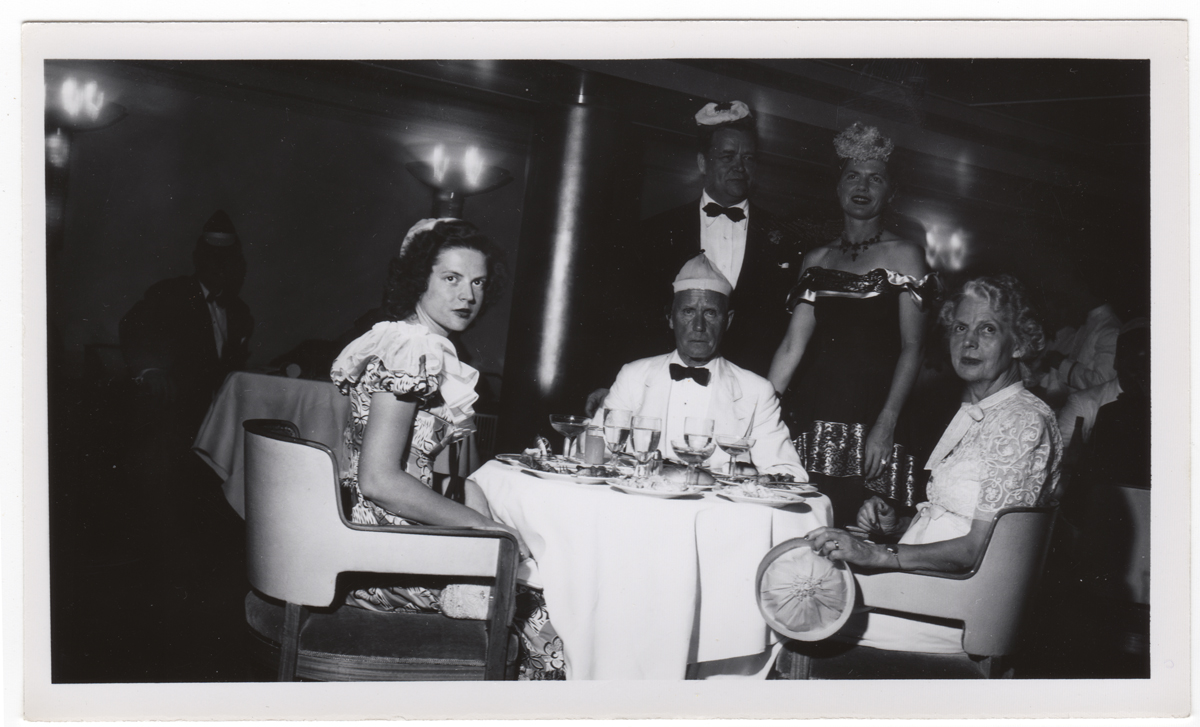 Catherine Roddis (shown here with her daughter Augusta and husband Hamilton) wore the evening dress below in the Champlain Dining Room of the SS Nieuw Amsterdam, 1948. / Photo courtesy of the Estate of Augusta Denton Roddis 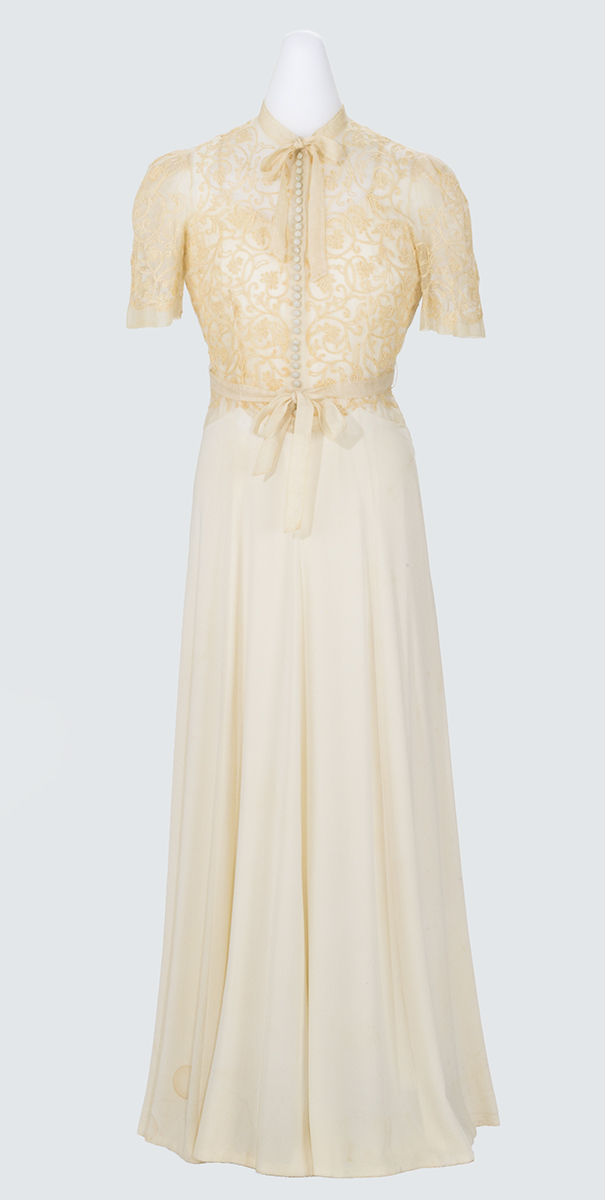 Augusta Roddis wore the dress shown below for daytime activities during a 1949 European trip onboard the RMS Queen Mary—the world’s fastest ocean liner in the late 1940s. 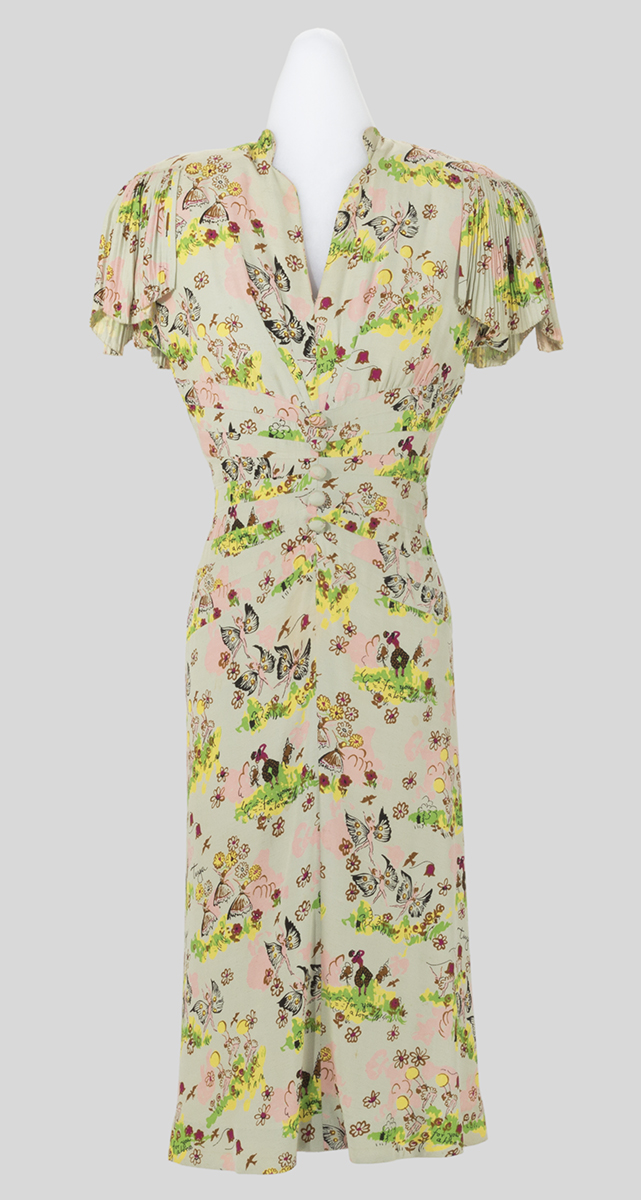 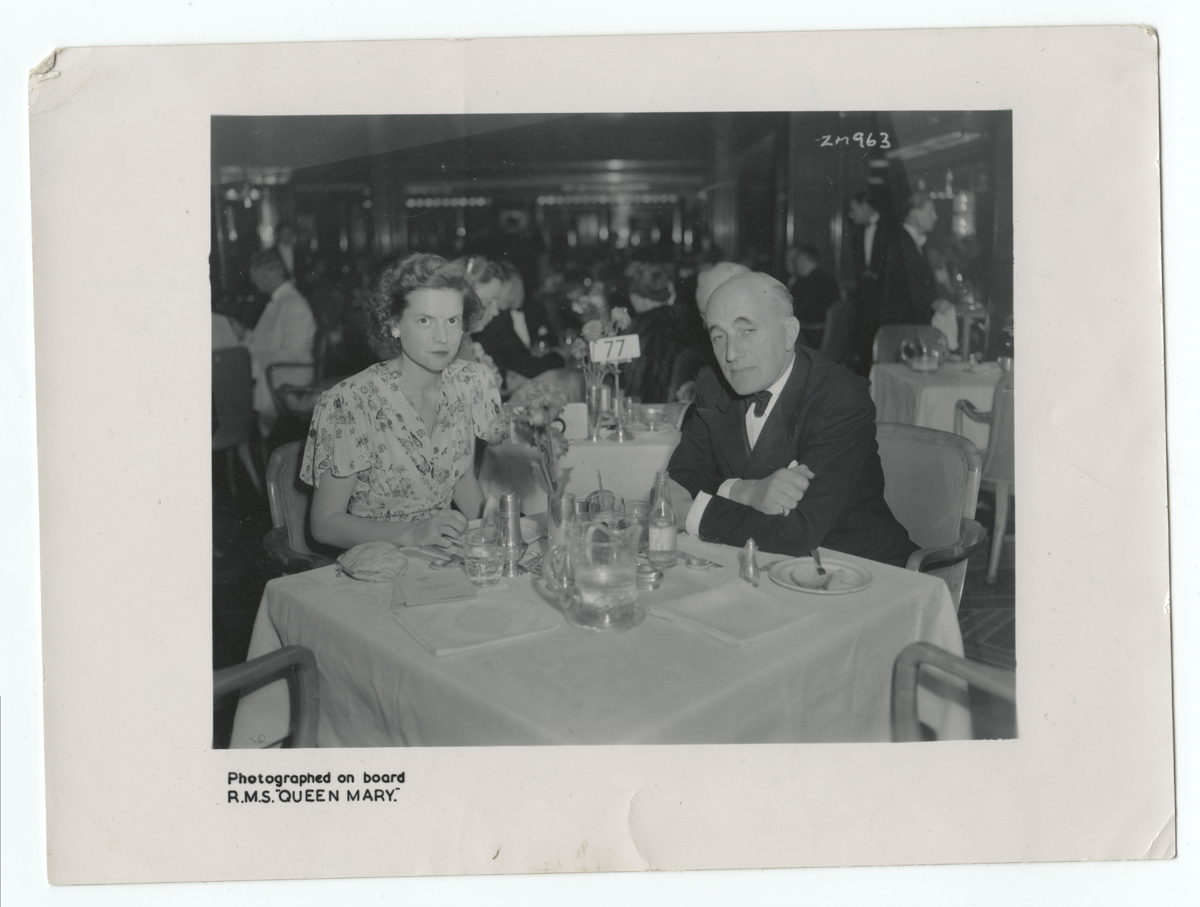 Augusta Roddis, with her luncheon partner, in the first-class dining room of the RMS Queen Mary, September 1949. / Photo courtesy of the Estate of Augusta Denton Roddis

Catherine Roddis packed the dress shown below for a trip to Europe onboard RMS Queen Elizabeth. Margery Wilson, author of a 1941 etiquette book, recommended lace for travelers—it held its shape in any climate, required little ironing, and always looked elegant. 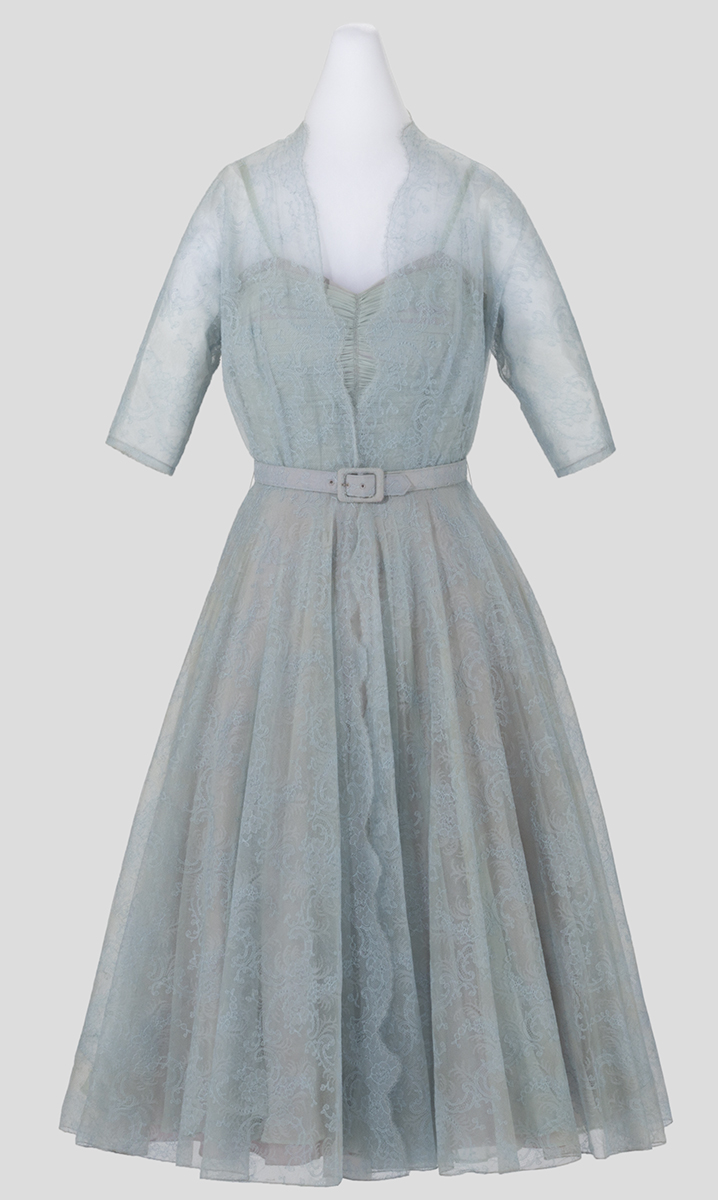 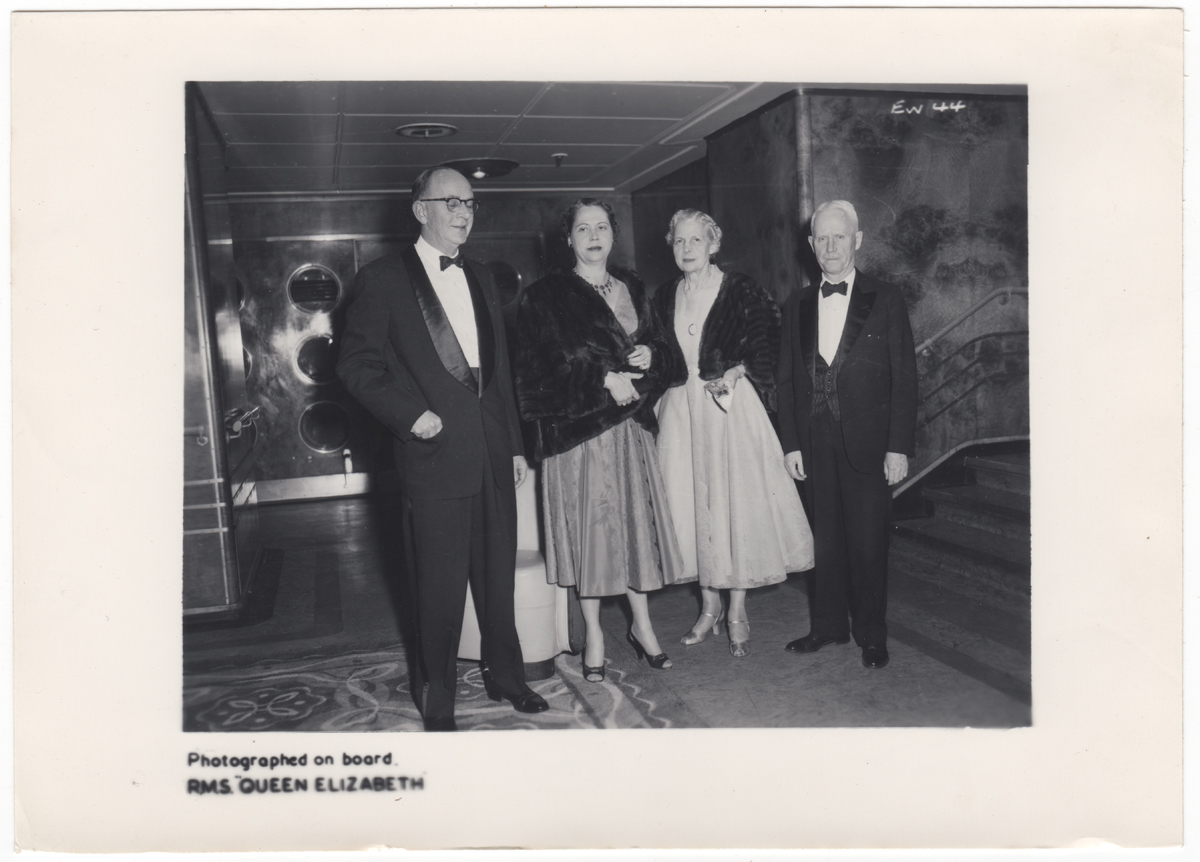 Catherine Roddis (shown here with her son-in-law and daughter, Henry and Sara Jones, and husband Hamilton) wore the dress depicted above during a trip to Europe onboard the RMS Queen Elizabeth in 1950. / Photo courtesy of the Estate of Augusta Denton Roddis

While packing for ocean liner travel might be less complicated for male passengers like Hamilton Roddis, it still required suits and ties—and often a tuxedo. 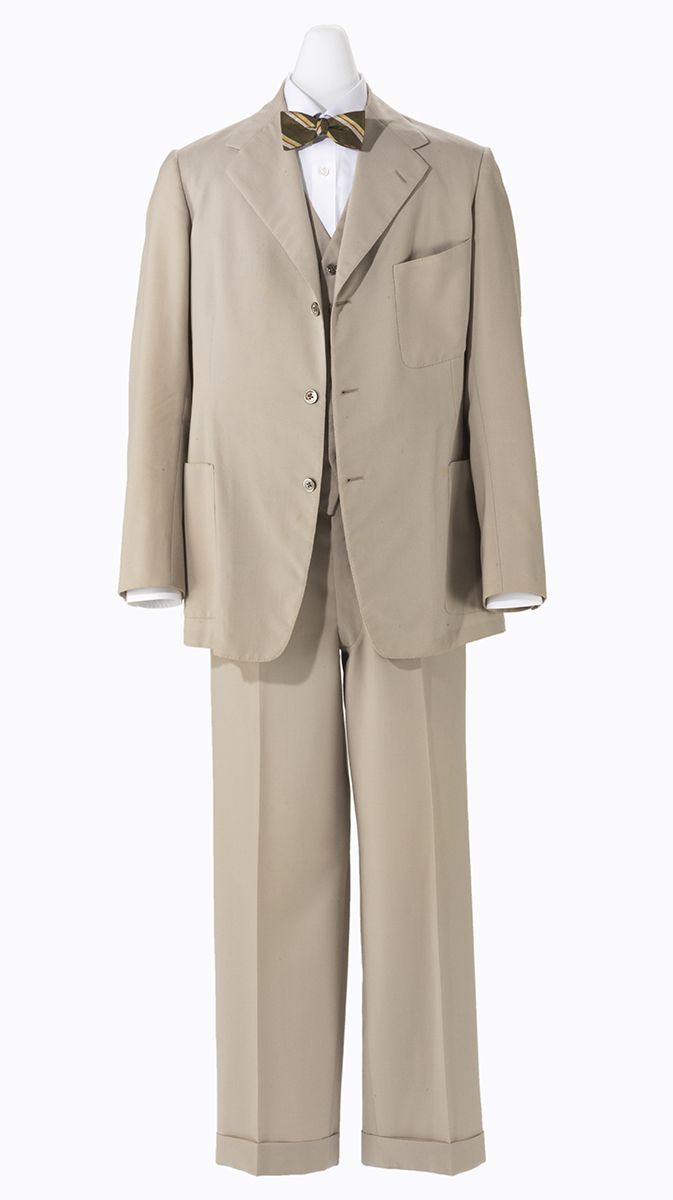 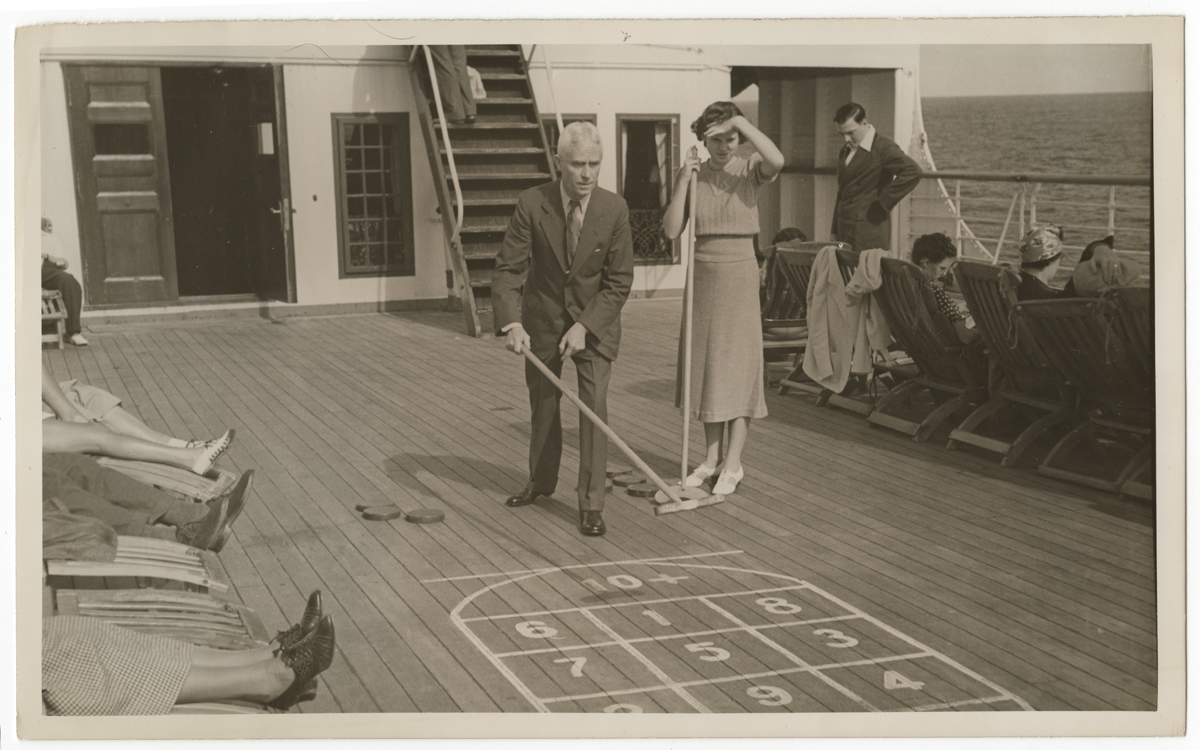 Hamilton Roddis and his daughter Augusta play shuffleboard on the SS Manhattan in 1938. / Photo courtesy of the Estate of Augusta Denton Roddis