Nostalgia for those who experienced it—and a hip mid-century modern revival for others. 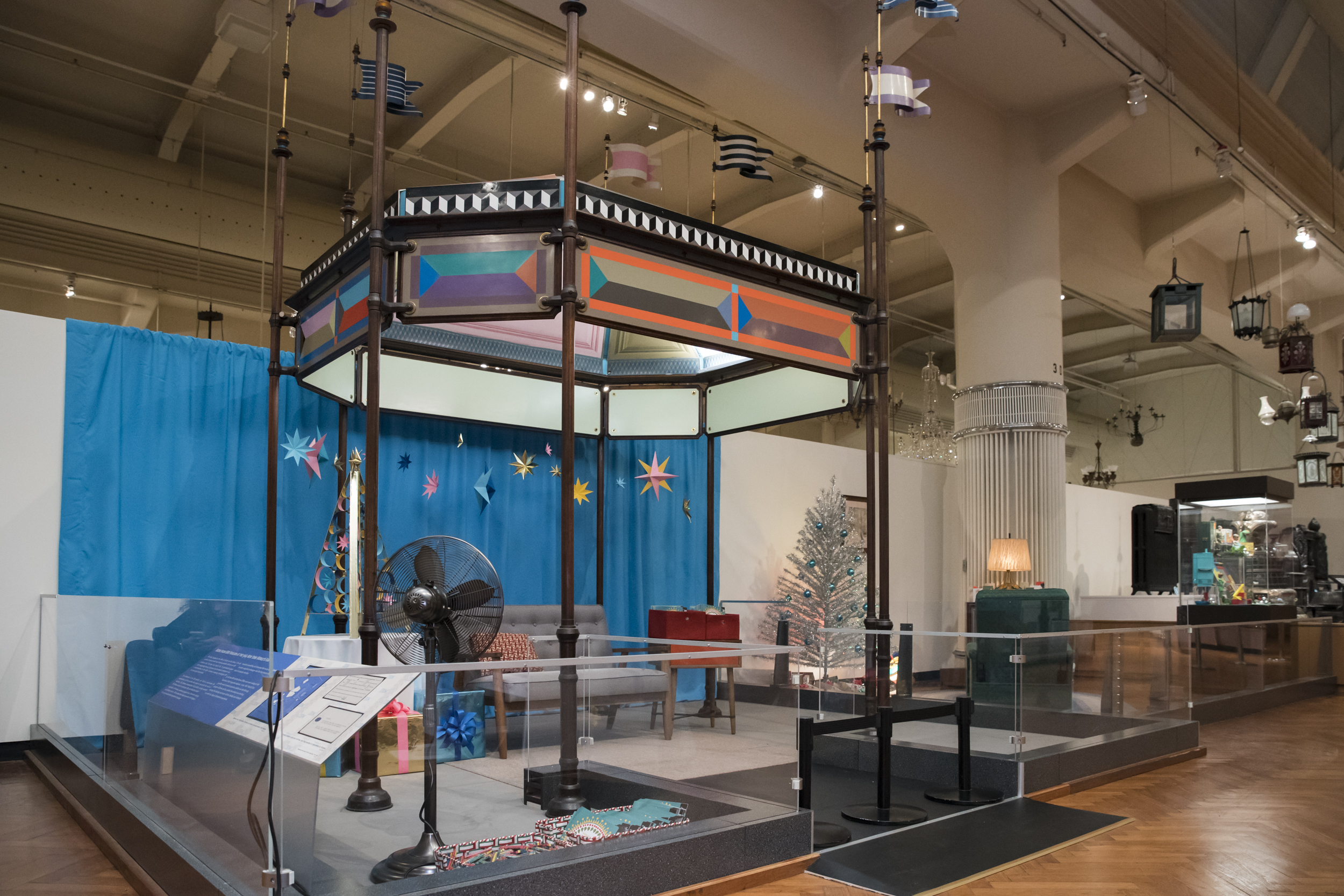 The Visits with Santa experience in Henry Ford Museum of American Innovation this year is a throwback to the 1960s. Kids can tell Santa their wishes as they sit next to him under a colorful kiosk made by Ray and Charles Eames for the IBM pavilion at the 1964 New York World’s Fair.  Nearby is a cozy 1960s living room vignette—complete with a La-Z-Boy chair, television set, and an aluminum Christmas tree from the era.

This mid-century modern theme coincides with the opening of our newest permanent exhibit in the museum, Mathematica, also designed by Ray and Charles. Several components of Mathematica were featured inside that IBM Pavilion at the 1964 World’s Fair, so we were excited to bring those two experiences together for this year’s holiday programming.

The scene provides a bit of nostalgia for those who experienced the 1960s—and a hip mid-century modern revival for others. Let’s look at some blasts from the 1960s Christmas past. 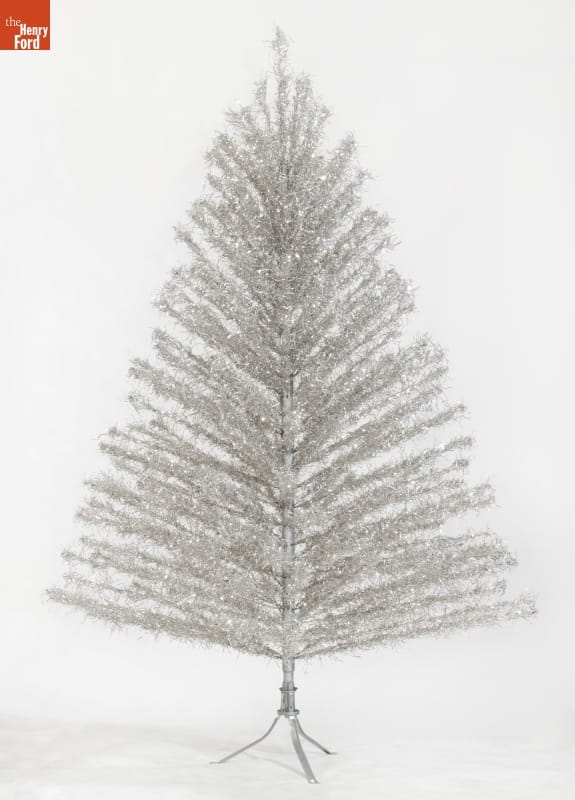 The early 1960s brought a fresh, new look to Christmas tree aesthetics.  A completely modern look--the aluminum Christmas tree.   It made a shiny, metallic splash in living rooms all over America.  More than a million trees were sold during the decade.   A tree choice that eschewed the traditional pine- or fir-scented Christmas experience when it landed on the Christmas scene in the 1960s, now conjures up images of a retro Christmas past. 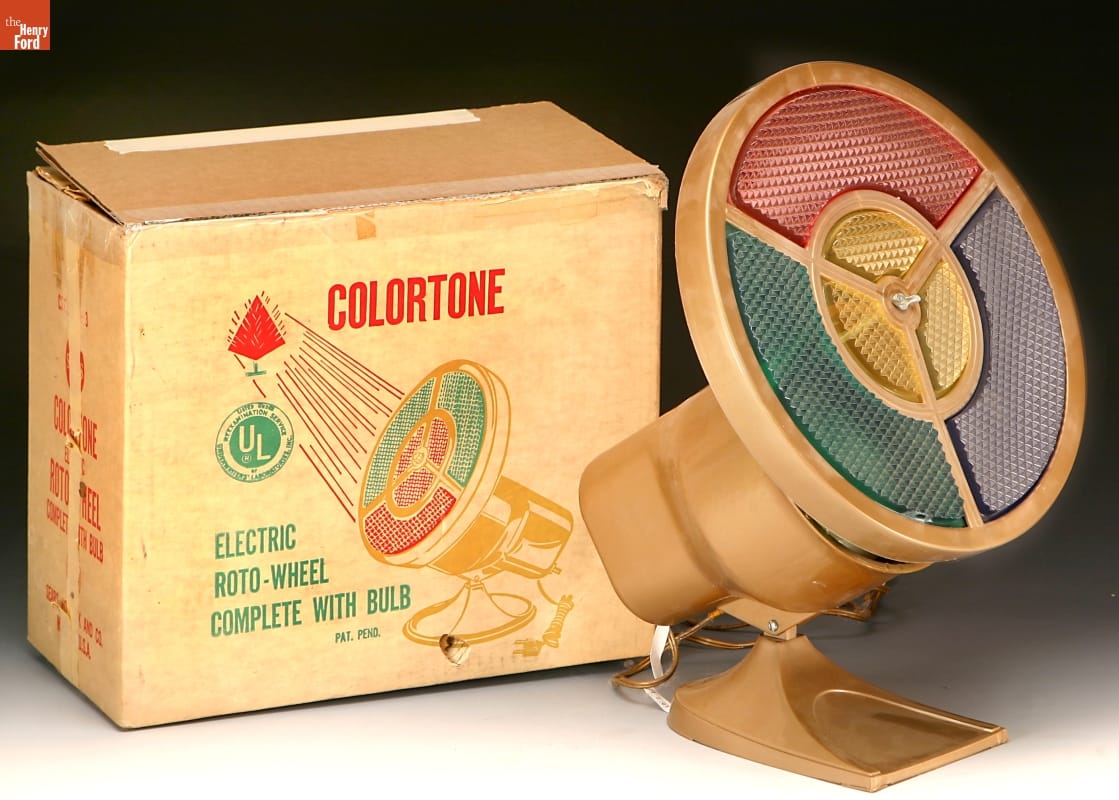 A color wheel lit up the aluminum tree, with the tree changing from blue to red to green to gold as the wheel revolved.  The color wheel was there for a practical reason—you couldn’t put strings of lights on aluminum trees because of fire safety concerns.   But to those viewing the transformation, the color wheel seemed a no-brainer way to light these trees—so modern and so magical.  It was mesmerizing to watch—whether from a front row seat in your living room or the view through your neighbor’s window. 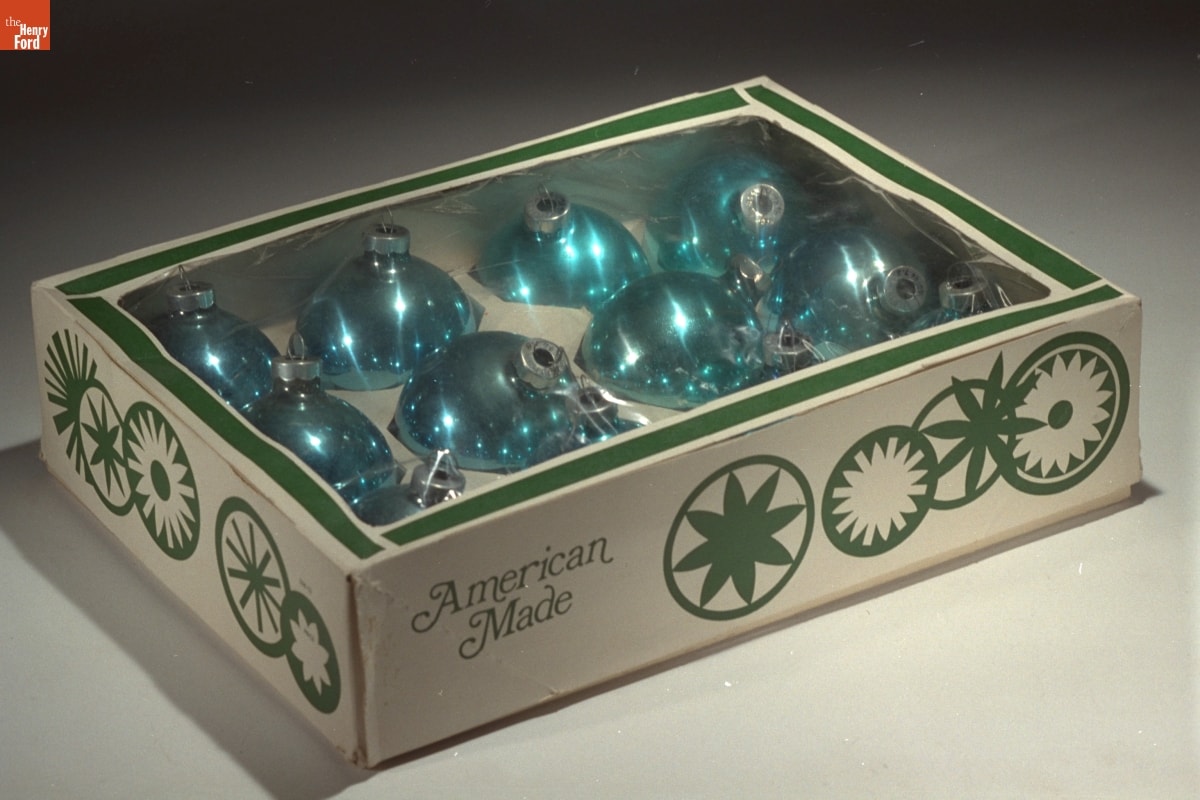 The Smith family of Redford, Michigan purchased these ornaments in 1964 to hang on their aluminum Christmas tree.  THF309083

Aluminum trees called for minimalist look. The trees were often sparingly decked with ornaments all of one color. 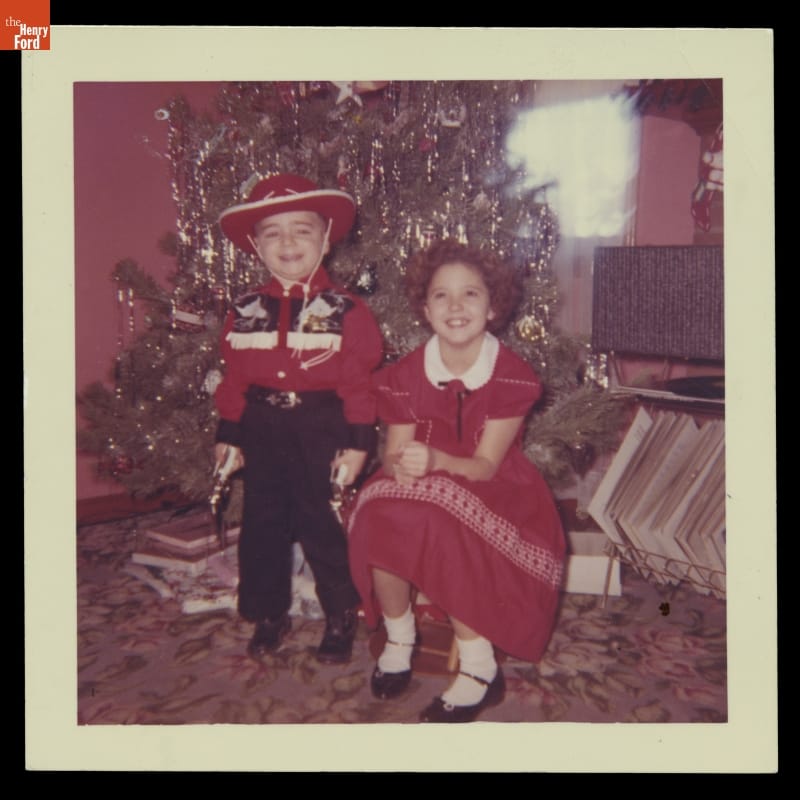 The Wojewidka siblings pose for a Christmas photo in front of their live tree in 1960.  THF125145

Yet, “real” trees remained popular as well—fresh-cut trees chosen from one of the many temporary Christmas tree lots that popped up in cities and towns. (The cut-your-own trend was not yet widespread.)  Scotch pines were favored by many—though there were diehard balsam fans as well.  These trees were bedecked with a varied array of ornaments—glass ones by the Shiny Brite company were popular. And shiny “icicles”—made of lead before it was prohibited—hung from the branches to add to the sparkle.

Holiday Greetings in the Mail

By the early 1960s, Christmas cards offered a greater variety of seasonal images beyond those traditionally found. This image shows a woman clothed in a pine tree decorated with 1960s trendy-colored ornaments.   THF287028

By mid-December, mailboxes were filling with Christmas cards, sent by family and friends to let the recipient know that they were being specially thought of during the holiday season. It was exciting to pull out handfuls of cards from the mailbox—it may have been the only time during the year when a kid had much interest in what the postman delivered. And not necessarily because of the cards themselves—the cards were a tangible sign that Christmas was indeed on its way and that Santa would soon be making his deliveries! 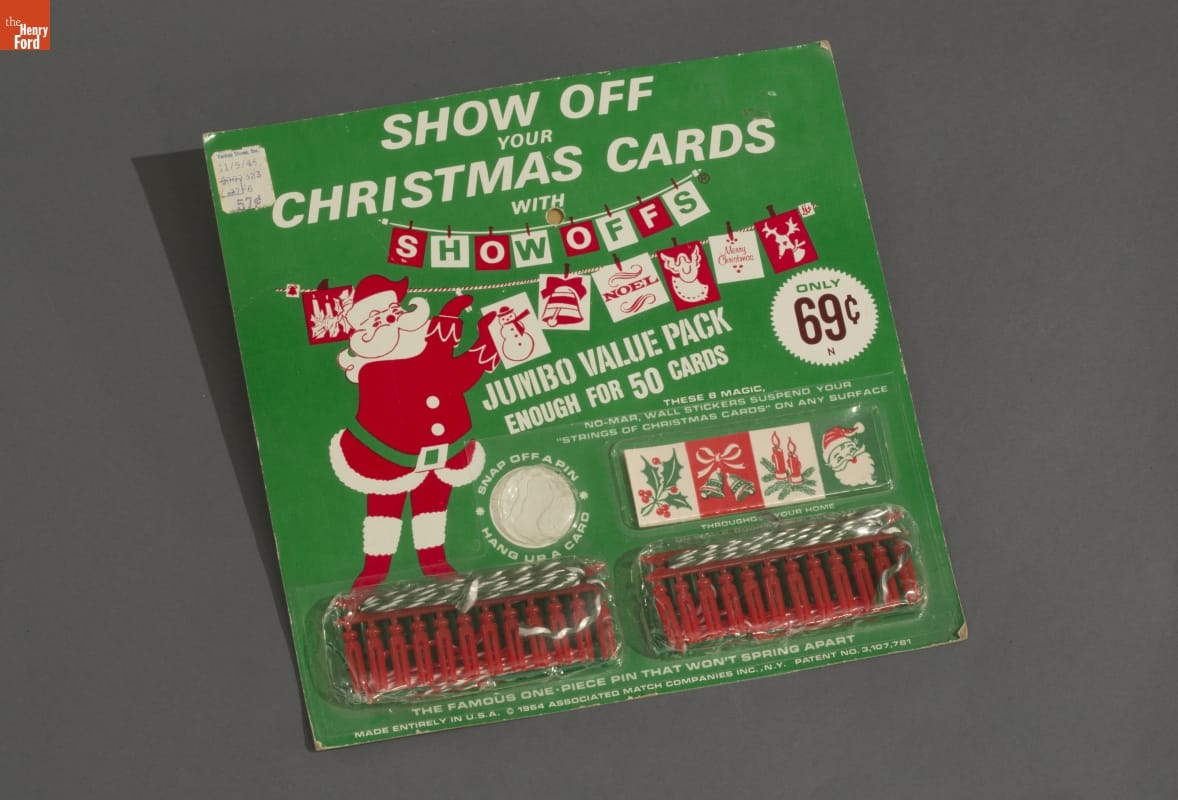 Where did people display all these Christmas cards? On a mantle, a table, or the top of the television. Or taped to a wall or a large mirror in the living room. Hanging them from a Christmas-themed clothesline was a more novel way to display them. 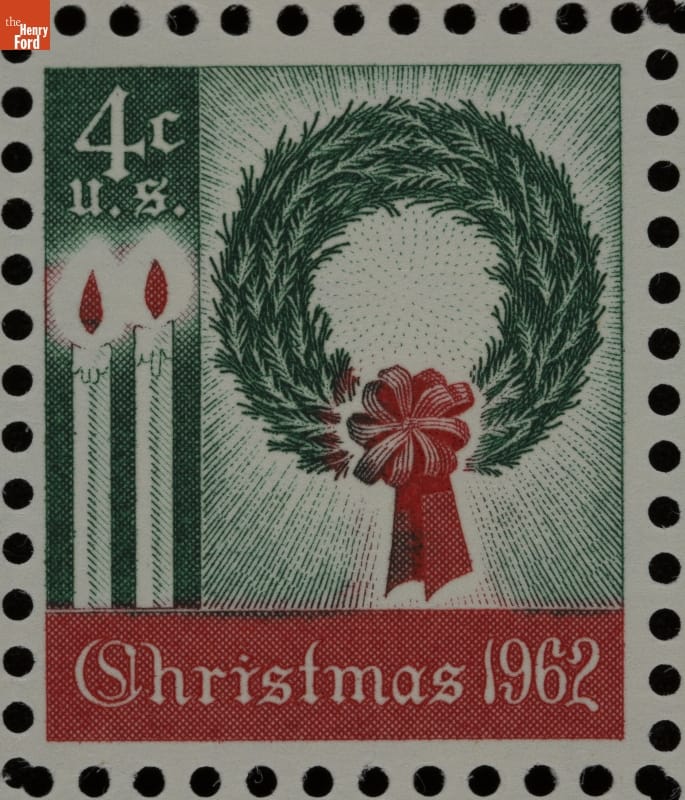 This 1962 stamp carried traditional Christmas images of lighted candles and a wreath.  THF287036 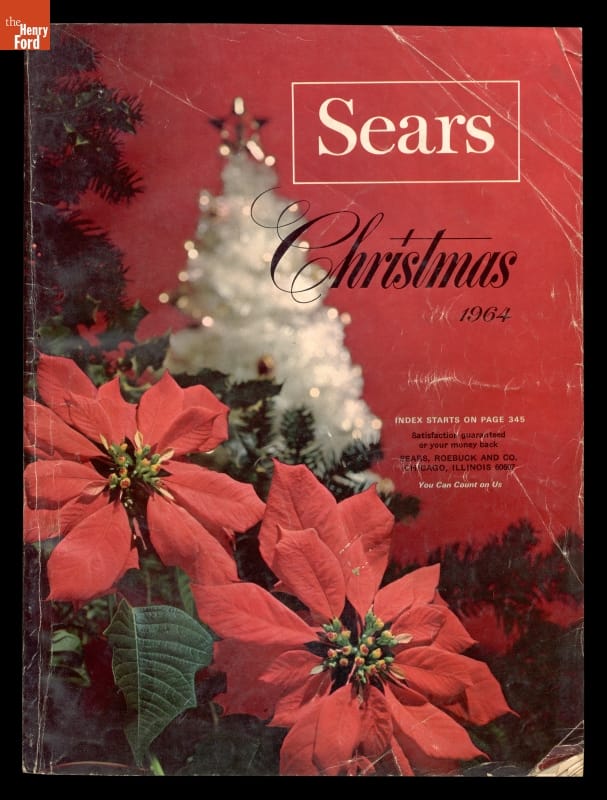 Christmas catalogs like this 1964 Sears, Roebuck & Company got a workout in December. THF135874

Kids were busy deciding what to ask Santa for. Instead of perusing the web, kids looked forward to the arrival of Christmas season catalogs sent by stores like Sears, Roebuck and Company, J.C. Penney, and Montgomery Ward.  Kids (and adults) eagerly leafed through the pages of the toys, clothing, and other gifts offered within, making their wish list for Santa’s perusal before passing the catalog along to another family member.

Television offered additional gift ideas, playing out the merits of products before viewers’ eyes in commercials that one couldn’t speed past with a DVR.

Toys for Girls and Boys
Many 1960s toys that appeared on the Christmas lists of millions of kids during the 1960s—some in updated versions—are still classics. 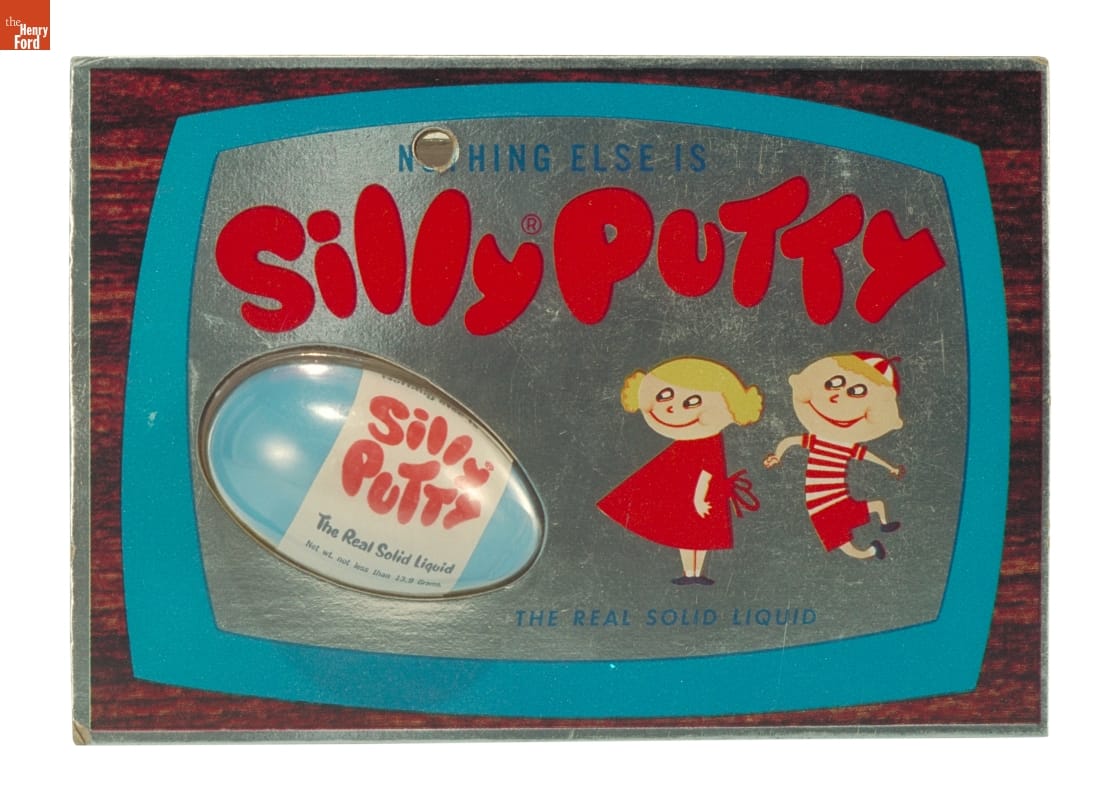 Silly Putty was invented during World War II as General Electric researchers worked to develop a synthetic substitute for rubber.  While no practical purpose could be found for the stuff, it did turn out to be a great toy. Silly Putty bounced higher and stretched farther than rubber.  It even lifted images off the pages of color comics. (My sister took Silly Putty to bed with her, leaving a perfect egg-shaped stain on the sheets that never came out.) 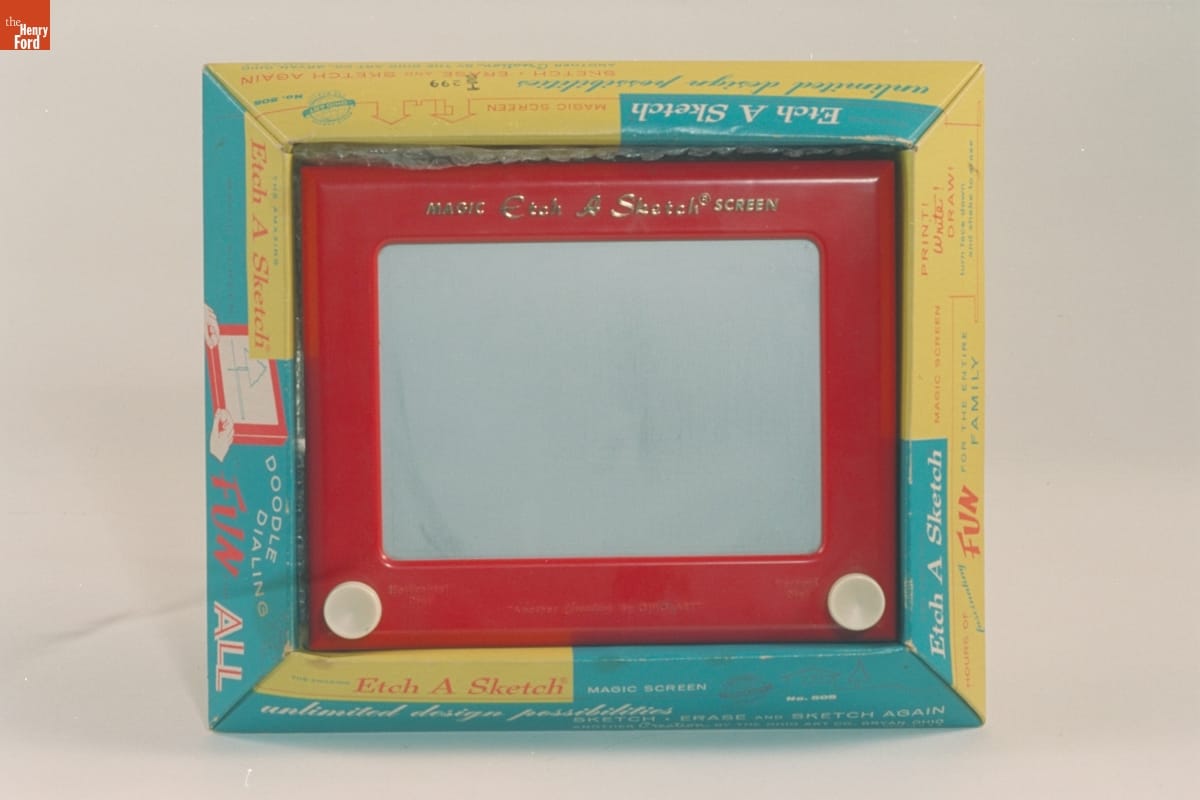 The 1960s saw an innovative new arts and crafts toy—the Etch A Sketch. Turning the knobs at the bottom of the screen (one to create horizontal lines, one for vertical) let the user “draw” on the screen with a mixture of aluminum powder and plastic beads. To erase, you just turned the screen over and shook it.  Incidentally, it was the first toy that Ohio Art, its manufacturer, ever advertised on television.  (Accomplished users could make great drawings on the Etch A Sketch—and some of us were just happy to produce decent-looking curved lines.) 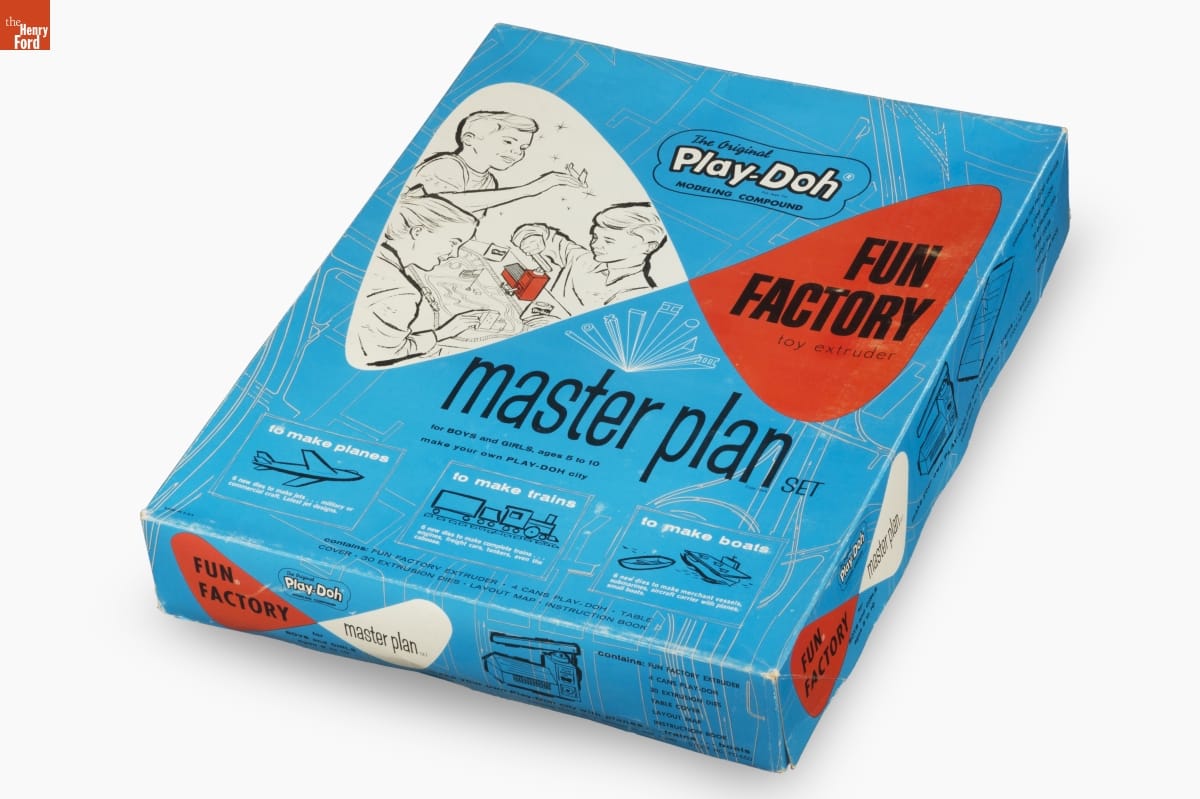 This 1962 Play-Doh Fun Factory was a childhood toy of Mary Sherman of Minnesota.  THF170363

Play-Doh introduced their Fun Factory in 1960. Now kids could go beyond free-form modeling with their red, yellow, blue and white Play-Doh. The Play-Doh Fun Factory provided instructions on how to create things like trains, planes, and boats—and an extruder with dies to easily make the components. 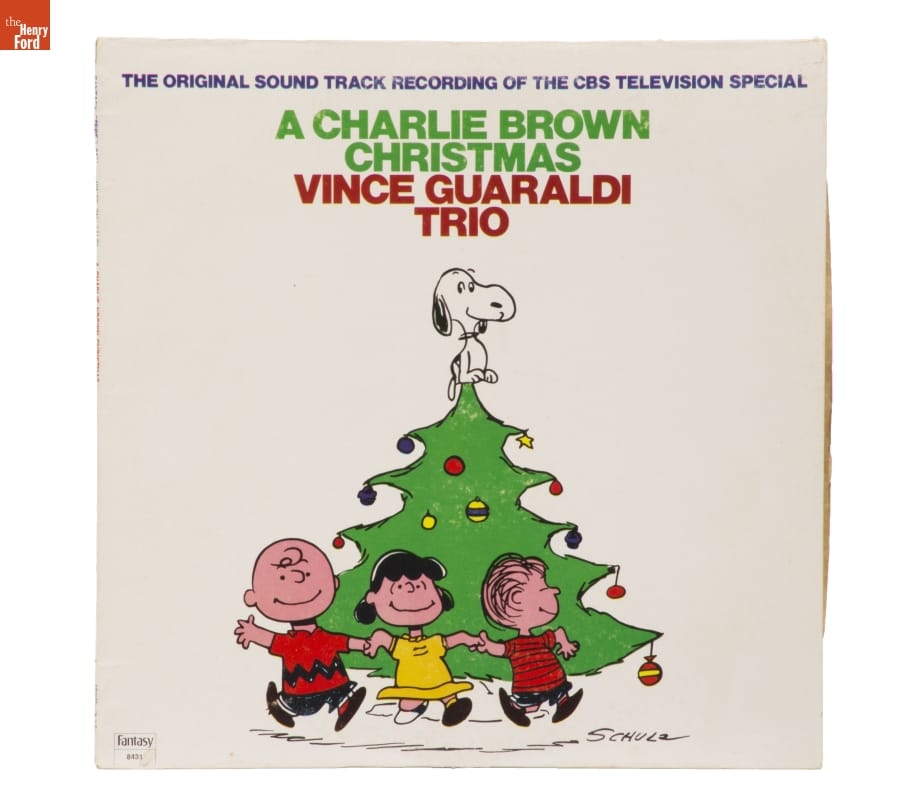 Album from A Charlie Brown Christmas television special, about 1965.  THF162745

Kids eagerly listened for announcements on television or leafed excitedly through TV Guide magazine to find out when the holiday specials would air.  You didn’t want to miss them—it was your only shot at watching!  There were no DVRs or DVDs back then. Two animated classics from the mid-1960s--A Charlie Brown Christmas and How the Grinch Stole Christmas--are among the earliest and most enduring of the Christmas specials developed for television.

Within their engaging storylines, these two shows carried a message about the growing commercialization of the holiday.  As kids watched the barrage of toy ads that appeared with regularity on their television screens and leafed through catalogs to make their Christmas lists, seeing these cartoons reminded them that Christmas was also about higher ideals—not just about getting presents.  These television shows—and the increasing number and variety of Christmas specials that have since joined them—remain a yearly reminder to temper one’s holiday-related commercialism and to think of the needs of others.

Not only have Charlie Brown and the Grinch become perennial favorites enjoyed by children and adults alike, but the soundtracks of these shows have joined the pantheon of musical Christmas classics. 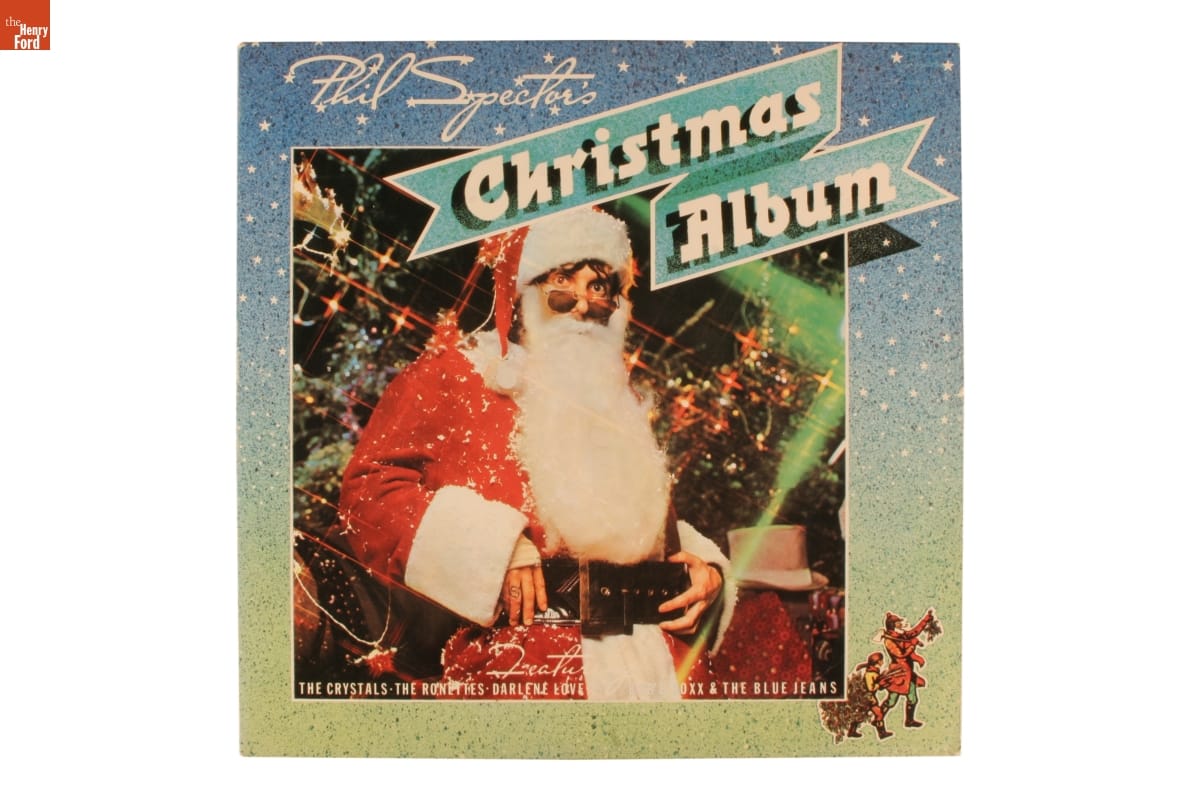 What would a 1960s Christmastime be without Christmas-themed music heard on the stereo at home and over speakers in stores? The 1960s saw a flood of Christmas albums and singles. Various singers—like Andy Williams, Nat King Cole, Perry Como, Johnny Mathis, Brenda Lee, Ella Fitzgerald, Elvis Presley, the Ronettes, the Crystals, and the Beach Boys—recorded their versions of old favorites and new tunes. 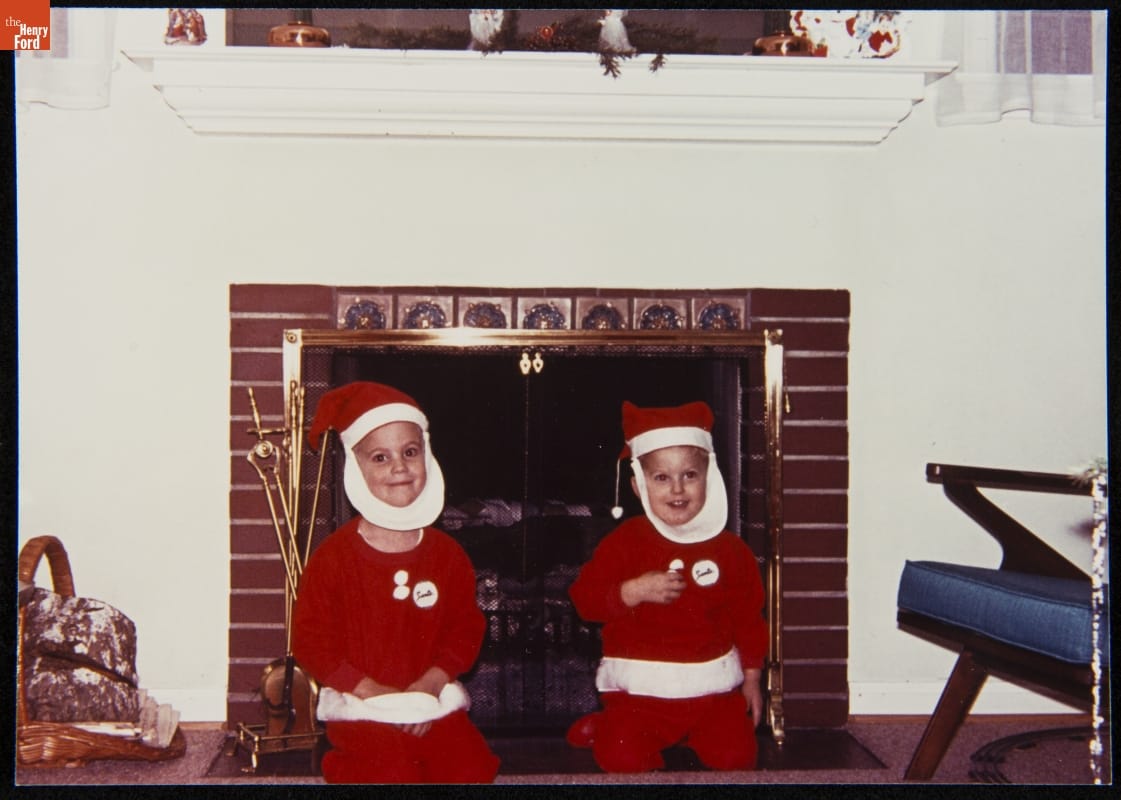 In 1963, the Truby brothers of Royal Oak, Michigan, posed in Santa pajamas given to them by their grandmother. THF287005

After the presents were opened and everyone was dressed in their Christmas finery, it was time to round up the kids for photos. Siblings (and, sometimes, their parents) might be posed together in front of a seasonal backdrop like the Christmas tree or a fireplace. Some families filmed home movies of their celebrations. These home movies often captured only strategic snippets of the Christmas celebration—movie film was expensive. And these home movies were without sound—which was probably sometimes a good thing!