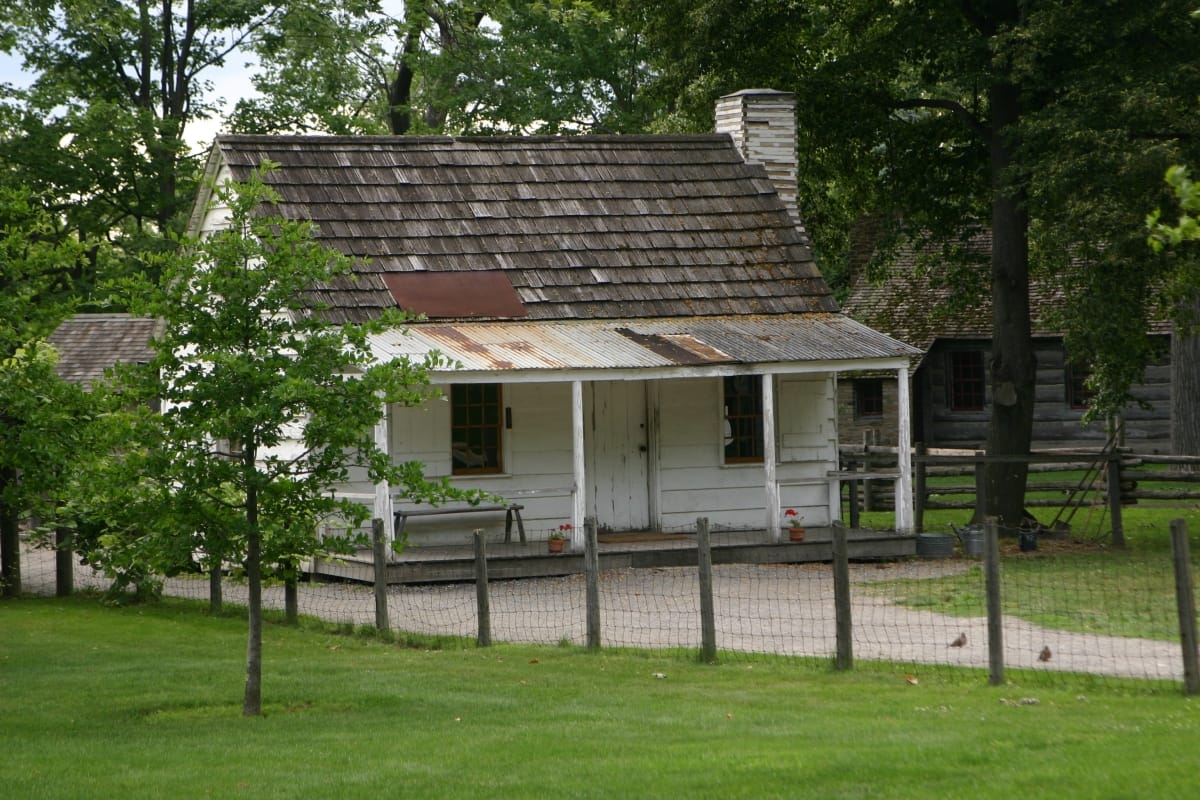 Through furnishings and presentations, the Mattox Home in Greenfield Village tells the story of one family living in rural Georgia in the 1930s. Read on to discover more about the community in Bryan County (where the house was originally located), learn about the Mattox family, and get an inside look at how they lived.

Amos and Grace Mattox
Amos Mattox, probably born around 1889, grew up in this house during the harsh years of Southern segregation. He and his wife, Grace, married in 1909.

The home in Greenfield Village is shown as it would have been during the 1930s, when the entire country was in the grip of the Great Depression. Low prices and little demand for farm products created a crisis for farmers throughout the country, and many abandoned their land. Amos and Grace Mattox maintained their resourceful lifestyle, keeping up a vegetable garden, livestock, and fowl to feed themselves and two young children, Carrie and Amos, Jr. To supplement the family’s income, Amos worked at various jobs—as a laborer for the Atlantic Coast Line Railroad and Seaboard Air Line Railway and at the local sawmill, and as a shoemaker, carpenter, and barber. He also served as a deacon at the Bryan Neck Baptist Church. The church had been founded by his grandfather Amos Morel, a formerly enslaved steam engineer who, in the 1870s, purchased the land the Mattox home stood on. Like his grandfather, Amos Mattox sold parts of his family’s land when he needed cash.

Grace Mattox is remembered by her children as a busy and meticulous homemaker. In addition to daily chores, she canned fruits and vegetables, cared and provided for elderly and sick neighbors, crocheted, did “fancy work” embroidery, and made her home as cozy and attractive as possible. A devoted mother, she encouraged and supported the education of her two children, walking a mile to and from their school daily with a “proper hot lunch” for them.

Although life was hard, the Mattox family proudly affirmed that there was "always enough." 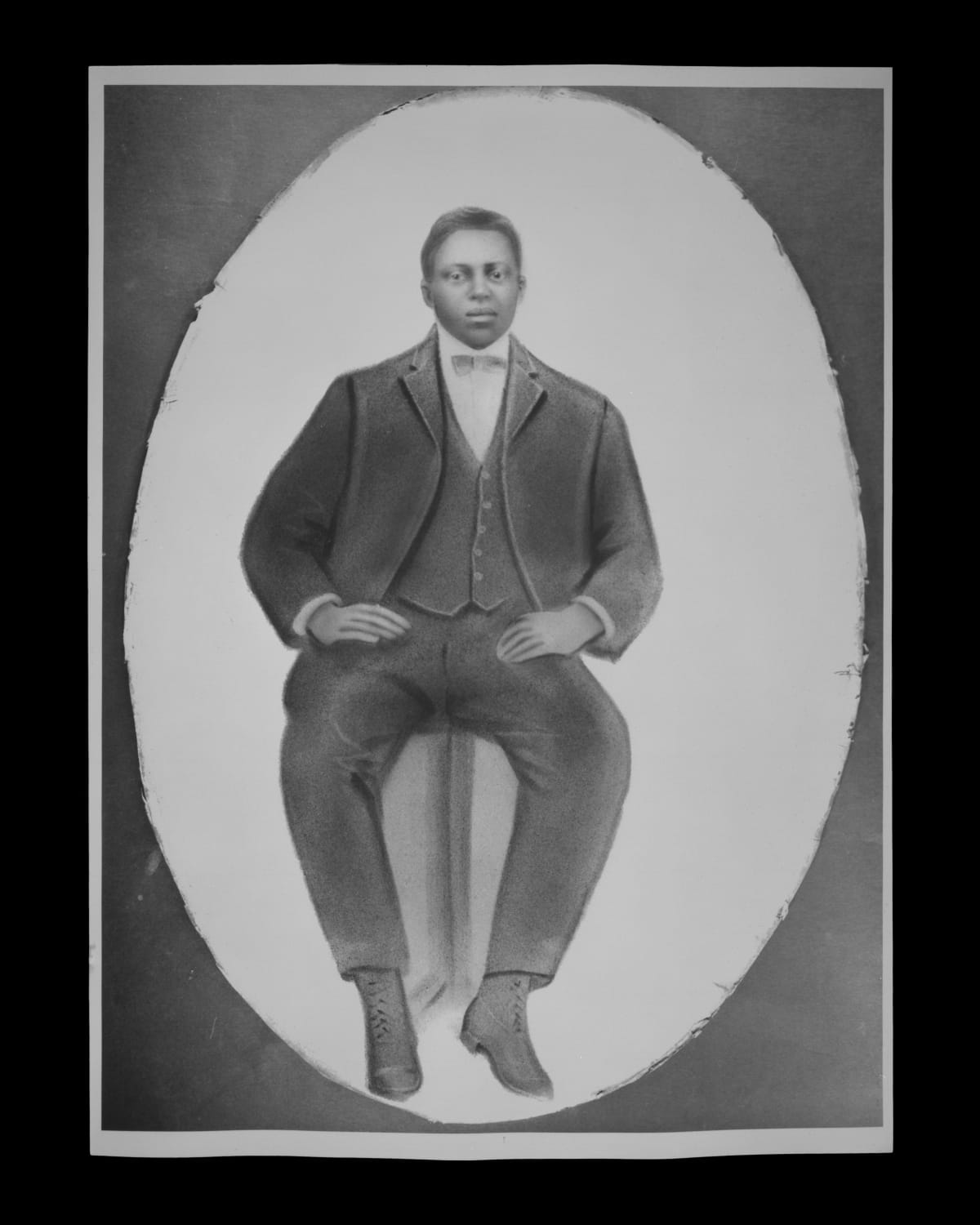 A copy of the only known photograph of Amos Mattox, Sr. THF135142

African American Community Life in 1930s Bryan County, Georgia
Sixty-five years after the Civil War, coastal Georgia was a land of sleepy towns, cypress swamps, moss-hung trees, oxcarts, horse-drawn wagons, and a few cars. Among long-abandoned crumbling mansions stood small farmhouses scattered about on what were once extensive holdings of plantation land but were now mostly small individual farms—some privately owned like the Mattox home and property, but most rented on the share system. Following the breakup of the large plantations after the Civil War, members of the same family tended to settle close together on the same land where they had lived when they were enslaved. A generation later, this was still true of the Mattox family. Amos Mattox, Jr., remembers his Uncle Henry living within “hollerin’ distance” and his Uncle Charlie living 5 to 10 minutes’ walk away. In the absence of telephones, close neighbors could be hailed by shouting.

What we know about the Mattox family comes from record searches and oral interviews. When Henry Ford acquired the Mattox home in 1943, there were still many people alive who could recall their youth on the very land on which their descendants lived. Elderly, formerly enslaved neighbors like “Aunt” Jane Lewis were links to the past for children like Carrie and Amos Mattox, Jr. 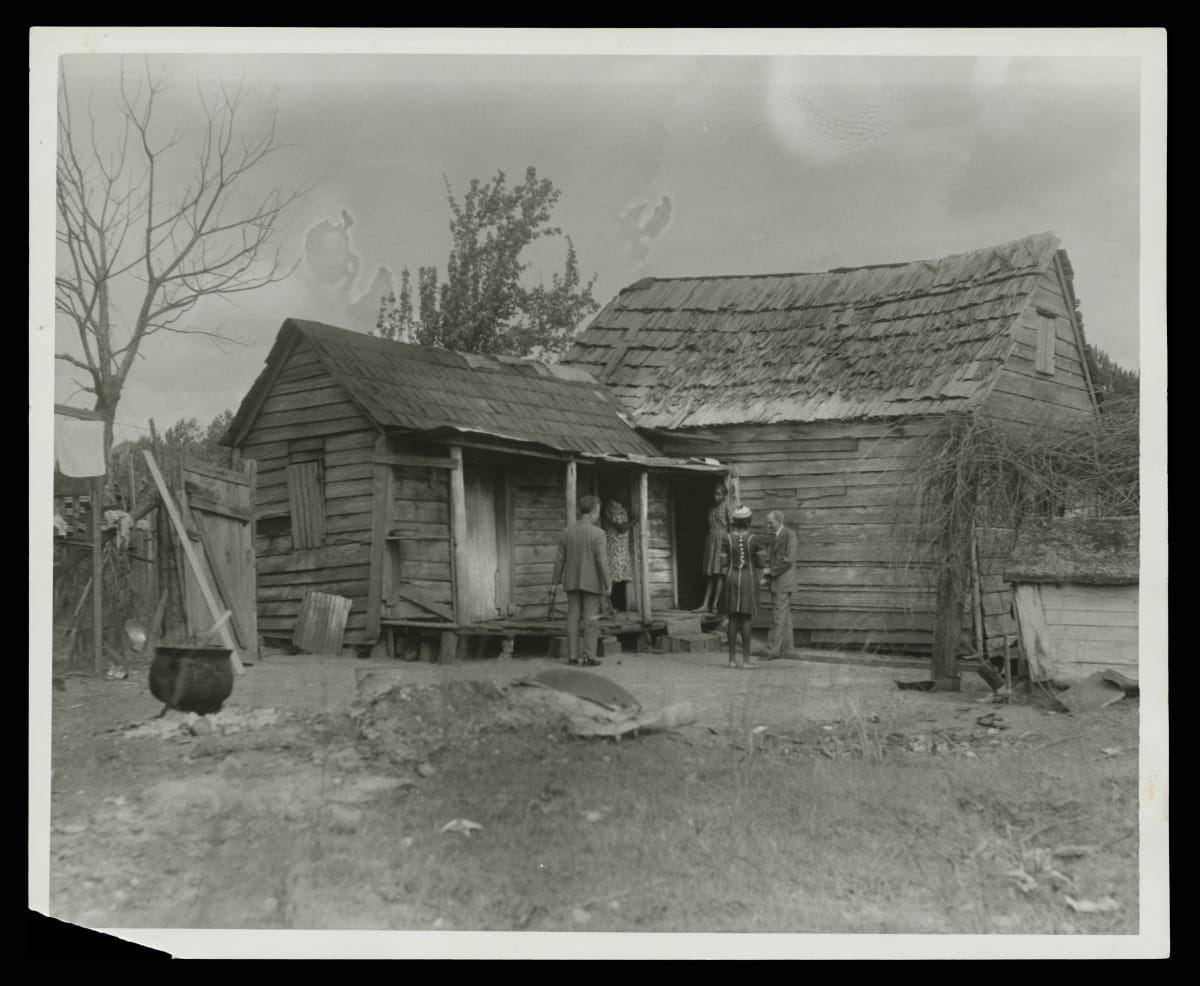 Henry Ford moved the Mattox Home to Greenfield Village in 1943. He can be seen in this photograph (far right) with Grace Mattox (in the doorway) and others at the home on its original site. THF123296

Like 89 percent of rural homes in 1930, the Mattox home lacked electricity and running water; kerosene lamps provided light. However, the Mattoxes owned a battery-operated radio and a hand-cranked phonograph. Amos, Jr., and Carrie could recall few leisure activities, but many occasions when the family worked together, farming, gardening, canning, and doing the wash. Most work was done outside, with seats provided on porches and under grape arbors. Houses were hot and close inside, and were used mainly for sleeping, bathing, or as shelter from the rain. In the evening the Mattoxes read from the family Bible.

Neighbors allowed their livestock, cattle and hogs, to range freely on common ground in the forest (families notched their animals’ ears with distinctive markings to prove ownership). After butchering a hog, the Mattoxes would smoke the hams for a few months in the chimney of their home. According to Amos, Jr., the chimney, made of clay and sticks, occasionally caught fire. To extinguish the fires, a member of the family climbed on the roof and poured water down the chimney.

Health care was poor and infant mortality high. Grace Mattox gave birth to six children, only two of whom survived past infancy. Often, community members would take shifts caring for a sick person night and day. Grace Mattox was instrumental in organizing home nursing for her local community.

The Mattox family’s social life, like that of their neighbors, centered around the Bryan Neck Baptist Church and the prayer house associated with it. The prayer house was about 150 feet from the Mattoxes’ home. They attended prayer meetings in Bryan Neck Baptist Church every other Sunday morning at daybreak. On alternate Sundays and Sunday evenings, as well as on Tuesday and Thursday evenings, they walked to the prayer house. The whole community was thought of as one family, including mothers, fathers, uncles, aunts, and close friends. They celebrated holidays together, cared for one another in times of sickness and crisis, shared their surplus produce, and encouraged and supported one another in their daily lives.

The Mattox Home in Greenfield Village
In 1943 Henry Ford brought the Mattox home to Greenfield Village. After the purchase he agreed to let the Mattoxes continue to live on the property, built the family a new house, and bought new furnishings for it. Since no written agreement was found regarding the continued use of the property after the death of Henry Ford (1947) and his wife, Clara (1950), the Mattoxes were, sadly, evicted by the new owners, the Southern Kraft Timberland Company. 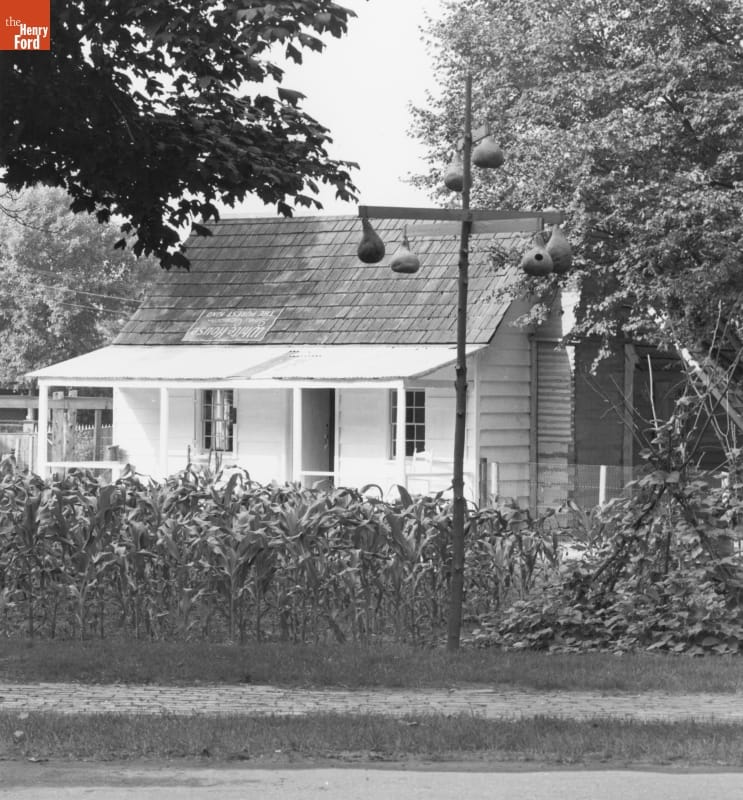 View of the Mattox Home in Greenfield Village, showing the vegetable garden and the birdhouses made from gourds THF45319

Exterior and Grounds
Bryan County, Georgia, lies in a swampy region of the Low Country. People living in this area usually maintained yards of swept dirt to prevent the growth of vegetation and keep mosquitoes and snakes away from the houses. Residents swept fancy designs into the dirt to make the yards more attractive, especially around holidays. People also fashioned birdhouses from gourds to attract purple martins, which feed on mosquitoes and other flying insects. The birdhouses at the Mattox home, as well as the roof repaired with a cast-off sign, are examples of the family’s ingenious use of available resources.

Vegetable Garden
Most of what the Mattox family produced was for their own use. In their vegetable garden the Mattoxes raised corn, sweet potatoes, rice, peas, beans, tomatoes, and okra, as well as collard, mustard, and turnip greens. 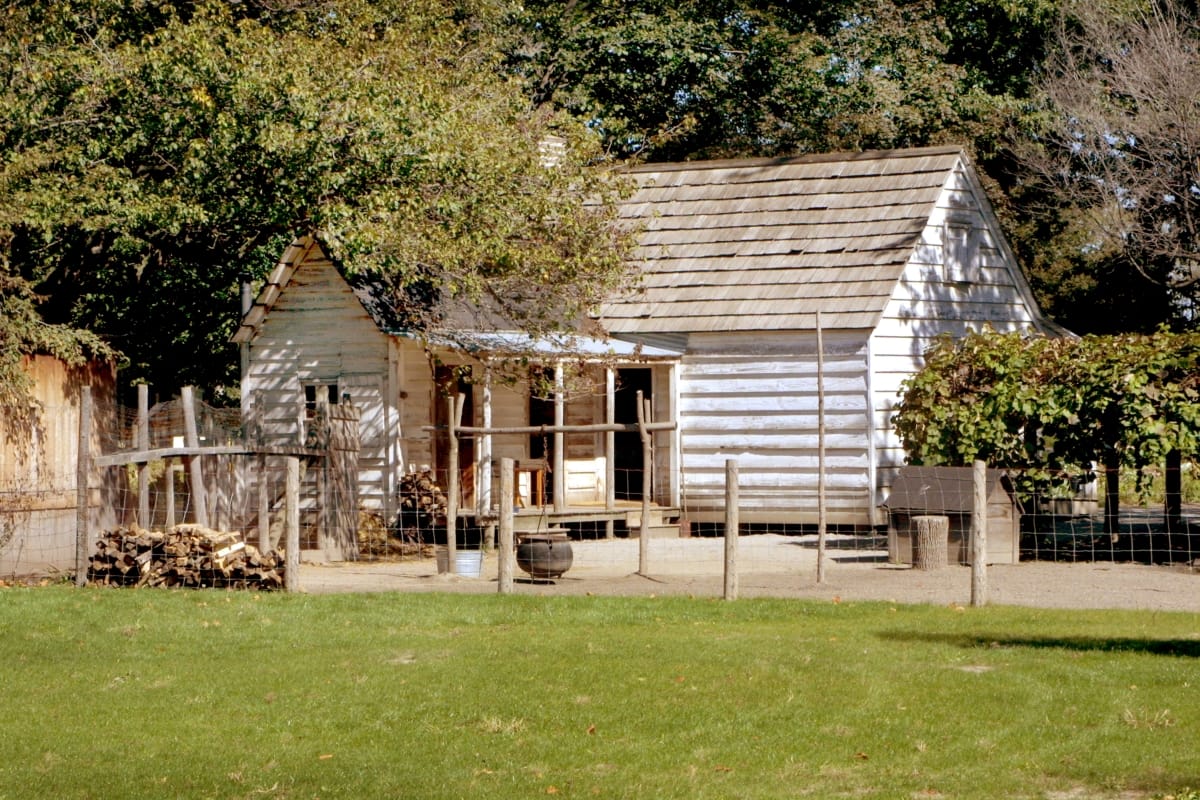 Grape Arbor
In the warm climate of coastal Georgia, families spent much of their lives outdoors. The Mattoxes’ grape arbor provided a cool, shady space for household chores like laundering or food preservation. Amos Mattox made wine from the native Southern scuppernong and muscadine grape varieties grown there.

Chicken Yard
The Mattox family raised chickens, hogs, and goats for their own use. The chickens and goats were confined in the yard near the house, while the hogs were allowed to range freely. 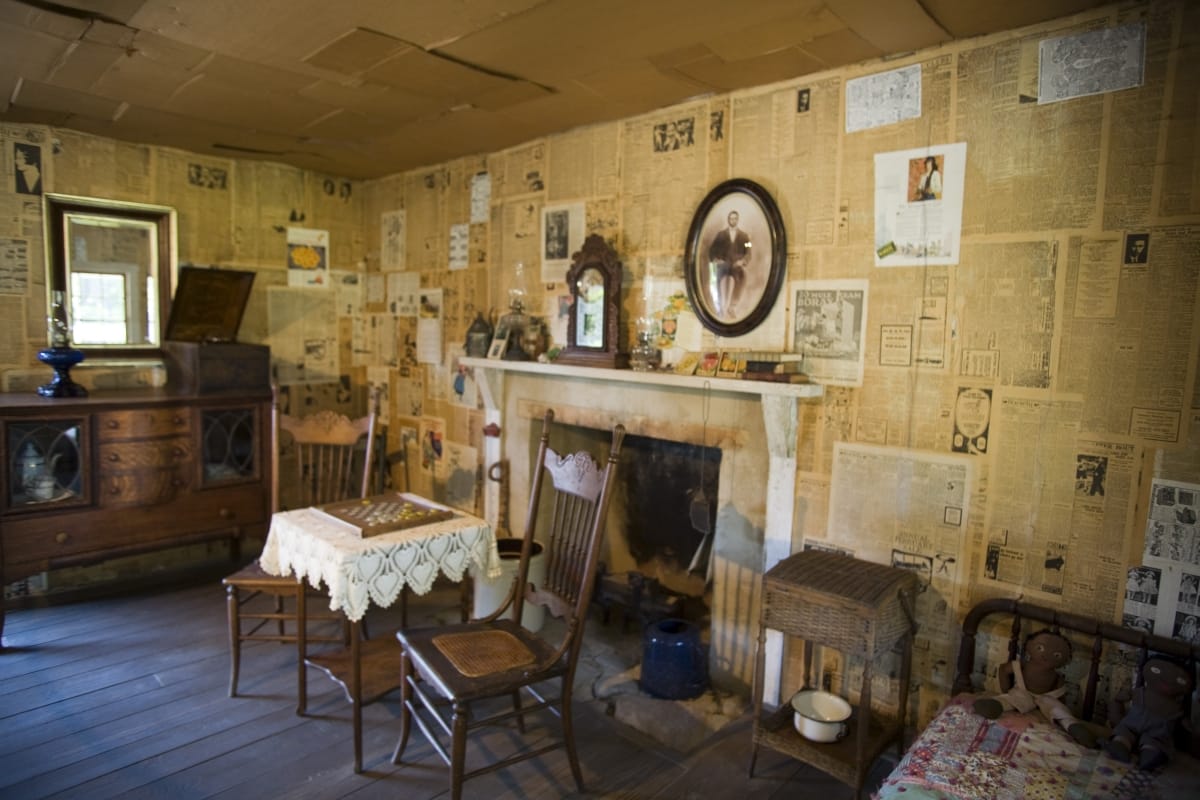 Interior of the Mattox Home in Greenfield Village THF53390

The Home
That Mattoxes covered their interior walls with newspaper for both insulation and decoration. Photographs taken in the 1930s and 1940s show that this was the norm rather than the exception in small rural homes in the South.

Much of the furniture now in the home was owned by the Mattox family. The mirror on the wall originally belonged to Amos Mattox’s grandfather, Amos Morel. Needlework scattered through the rooms represent Grace Mattox’s sewing and decorating skills. Over the mantel is a copy of the only known photograph of Amos Mattox, Sr. Pictures and fans with representations of religious themes and the family Bible reflect the strong religious grounding of the family. A checkerboard with bottle caps as game pieces and homemade dolls show how the family overcame the constraints of limited means. 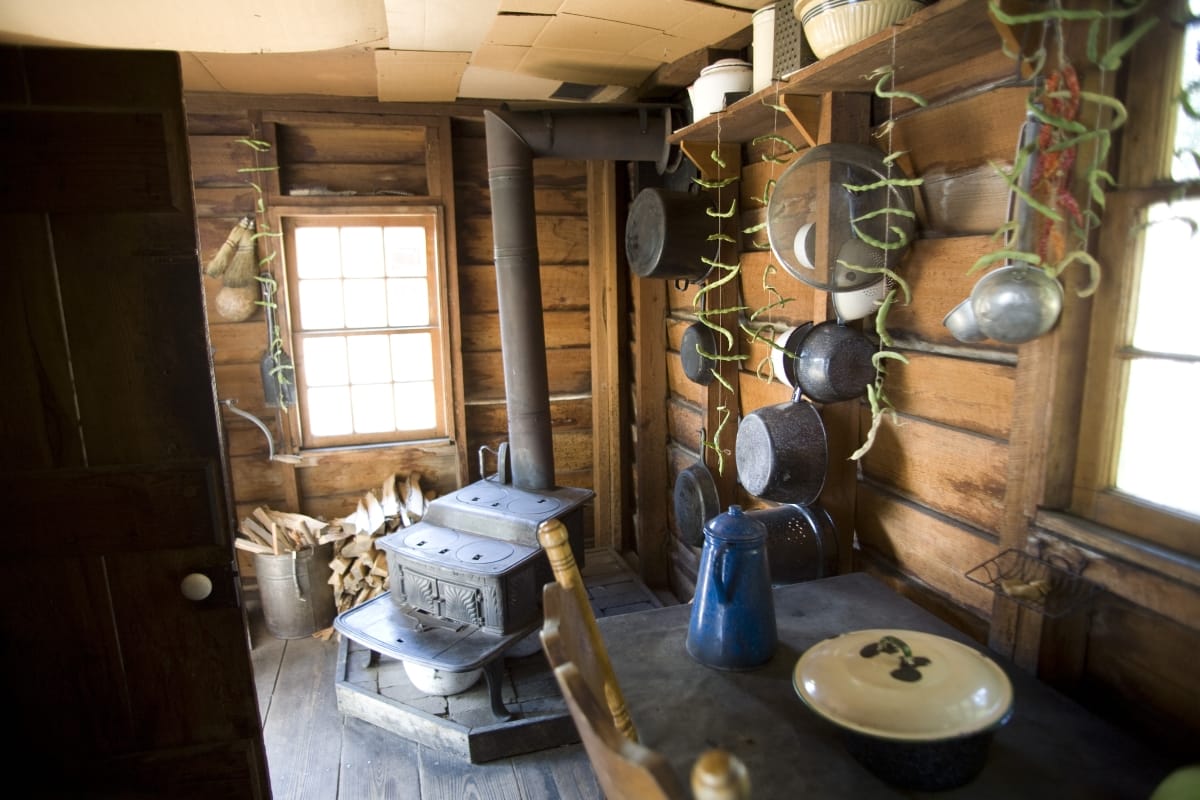 The room attached to the rear of the home contains the kitchen and dining room, often used as the children’s bedroom. On the woodburning cookstove, Grace Mattox prepared meals for her family and dishes to bring to church suppers and community celebrations. The family worked together to prepare canned goods that could be stored on shelves in the kitchen for use throughout the year.

Explore the Mattox Family Home for yourself in the Porches & Parlors district in Greenfield Village.