An Industrial Design Classic: Isamu Noguchi and the Radio Nurse 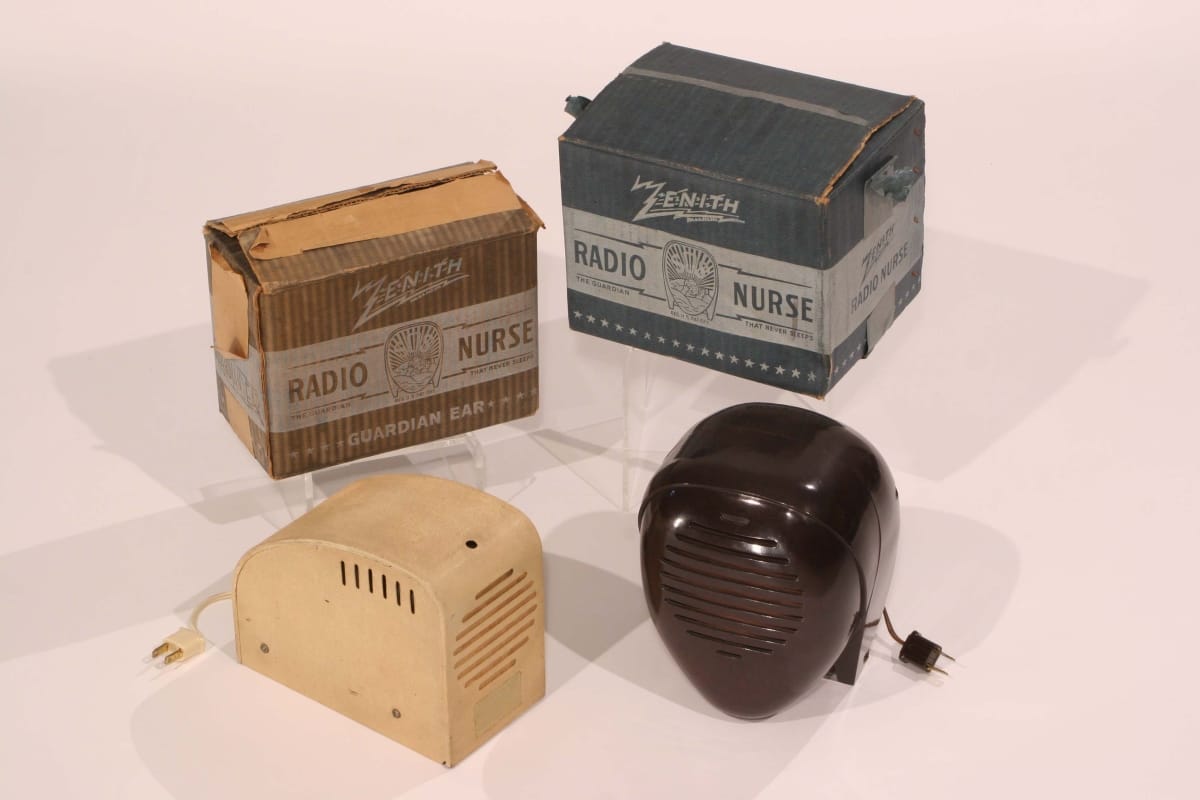 In March of 1938, Zenith Radio Corporation introduced a remarkable product—an elegant listening device, priced at $19.95, designed to allow parents to monitor their children after bedtime. The equipment and its setup could not have been simpler: The transmitter, called a “Guardian Ear,” could be placed close to the child’s crib or bed; the receiver, called the “Radio Nurse,” would be set close to wherever the parents happened to be spending their time. Both components would be plugged into electrical outlets, with the house wiring acting as the carrier for the transmitted sound.

The idea for the Radio Nurse originated with Zenith’s charismatic president, Eugene F. McDonald, Jr. Like all parents, McDonald was concerned about his baby daughter’s safety—especially in the wake of the kidnapping of aviator Charles Lindbergh’s young son. As a result, McDonald experimented with an ad hoc system of microphones and receivers that allowed him to keep an ear out for his daughter’s well-being. Satisfied with the system’s workability, he handed it off to his engineers to create something more reliable and marketable. The finished product, however, was much more than a marriage of concerned fatherhood, ingenuity, and engineering; the presence of another creative mind—that of Isamu Noguchi—resulted in an industrial design classic. (Discover more Noguchi-related artifacts in our Digital Collections here.) 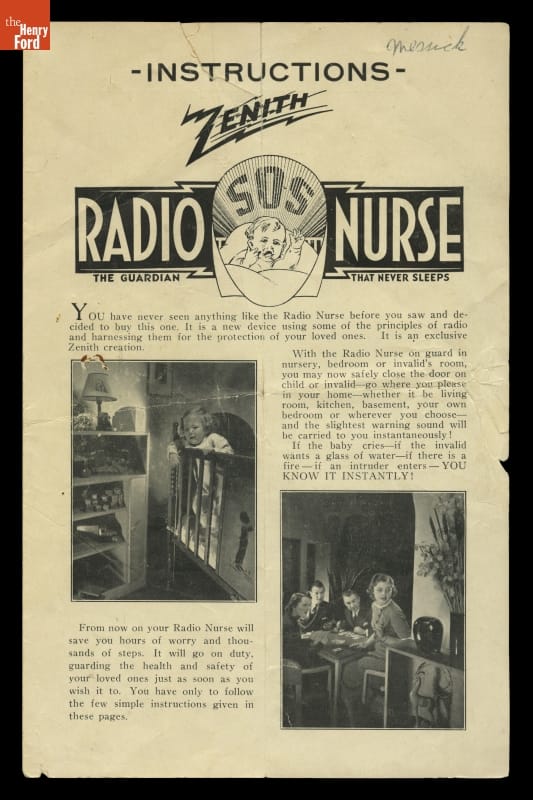 Instructions for Zenith’s Radio Nurse baby monitor depicted how the transmitter and receiver might be used in the home. / THF128154

Noguchi was responsible for the styling of the system’s most visible, and audible, component—the Radio Nurse receiver. Minimally, he had to create a vessel to house and protect a loudspeaker and its associated vacuum tubes, but actually his task was much more challenging: He had to find a way to soften a potentially intrusive high tech component’s presence in a variety of domestic settings.

His solution, remarkably, was both literal and paradoxical: He created a faceless bust, molded in Bakelite, fronted by a grille, and backed by the suggestion of a cap—an impassive abstract form that managed to capture the essence of a benign yet no-nonsense nurse. Shimmering in a gray area where the abstract and figurative appear to meet, it strikes a vaguely surrealist note—it wouldn’t be out of place in an image by Giorgio de Chirico or Man Ray. A touch of whimsy is incorporated: Adjusting the concealed volume control wheel amounts to a kind of tickle under the unit’s chin, subtly undermining the effect of the stern Kendo mask–like visage. Still, with its human-yet-mechanical features, the Radio Nurse remains slightly sinister and finally inscrutable. 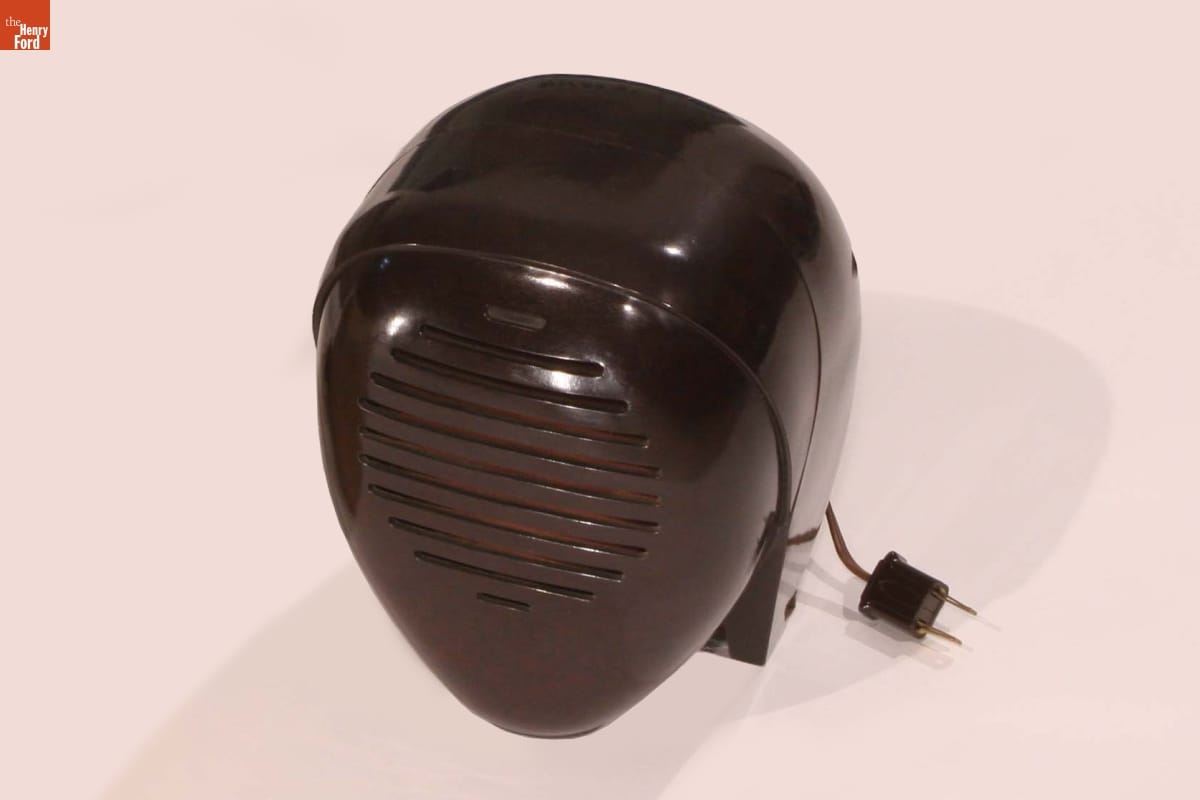 But was it neutral enough to sit close at hand without, in silence, striking its own discordant note? Its poor sales might suggest otherwise, although apparently it was a technical problem, broadcasts transmitting beyond the confines of a house’s own wiring, that gave customers cause for complaint. Alarming as the Radio Nurse might be when finally provoked into uttering one of Junior’s broadcasts, the possibility that some unknown voice might start to speak through that blank grille would surely have made the unit’s presence somewhat suspenseful.


Marc Greuther is Vice President of Historical Resources and Chief Curator at The Henry Ford. This post originally ran as part of our Pic of the Month series and was published in the September-December 2007 issue of The Henry Ford Living History Magazine.