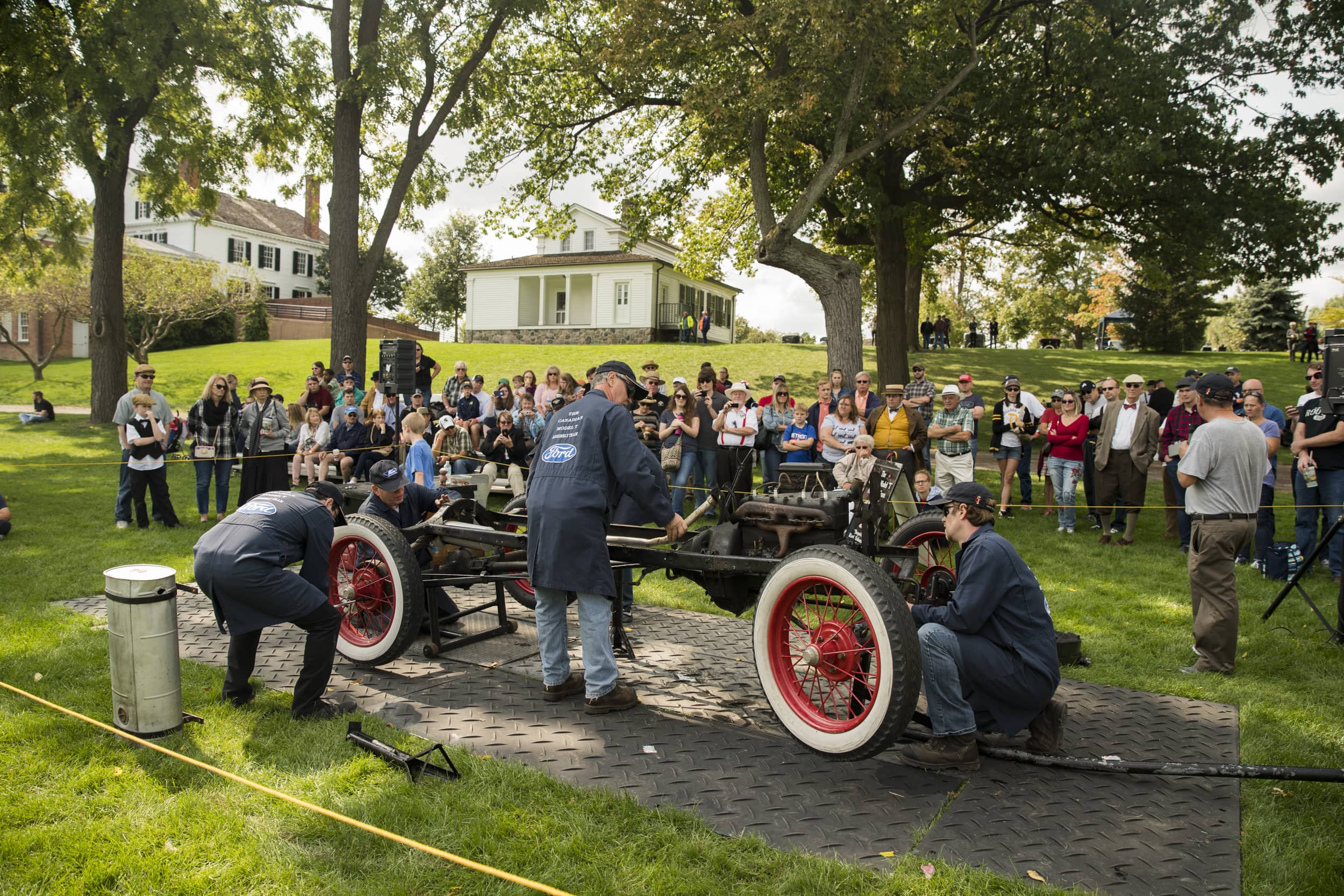 Our 67th annual Old Car Festival is in the books – and it was one for the books this year. Postcard-perfect weather, a host of new activities and hundreds of vintage automobiles from motoring’s first decades made this one of the most exciting Greenfield Village car shows in recent memory. 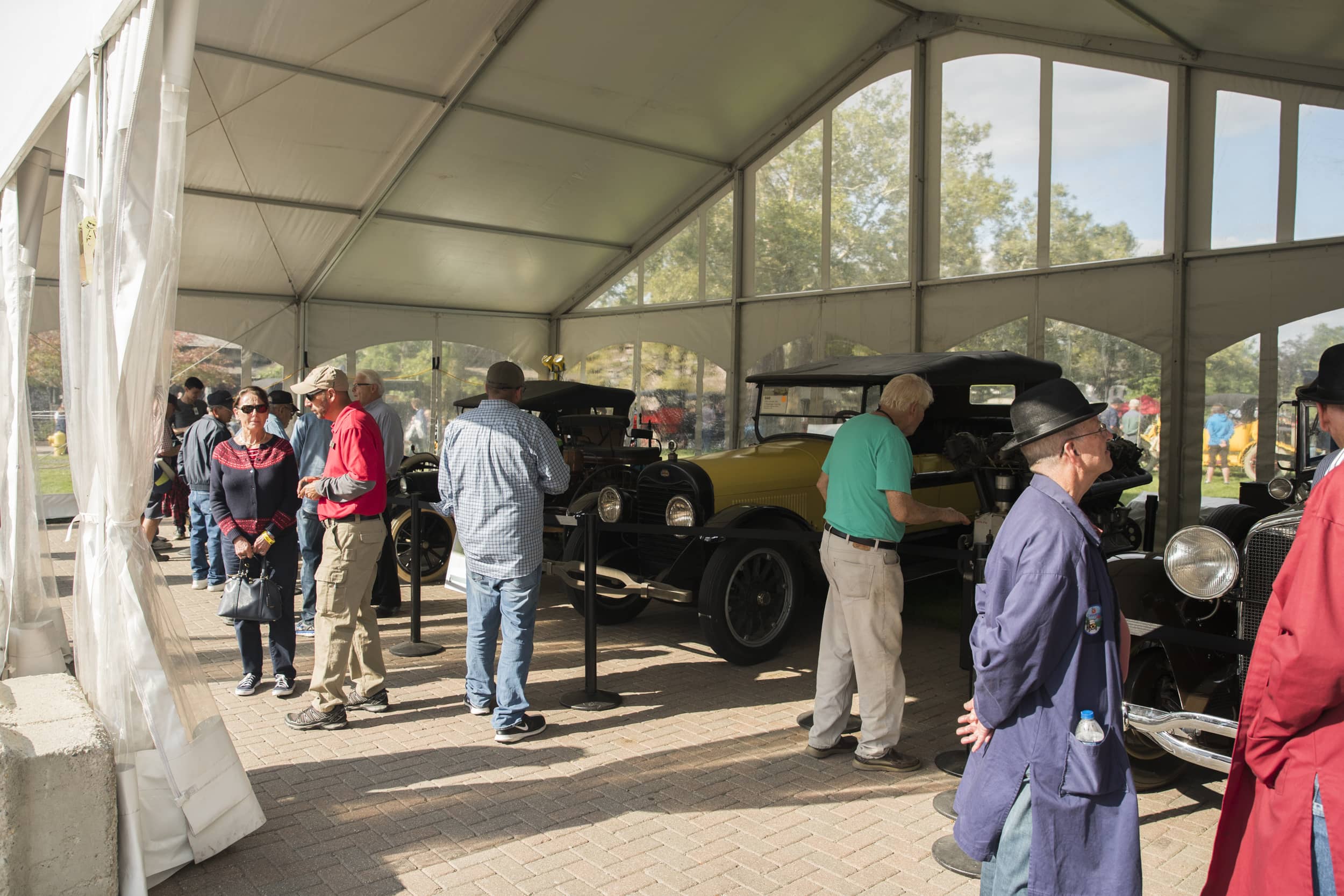 This yellow 1921 Lincoln, from the Cleveland History Center, is believed to be the earliest surviving Lincoln motor car.

Lincoln took center stage as our featured marque. It was 100 years ago that Henry Leland left Cadillac to form what would become his second automobile company, named for the first president for whom he voted. We had a number of important Lincolns on hand. From The Henry Ford’s own collection was the circa 1917 Liberty V-12 aircraft engine (Lincoln’s first product) and the 1929 Dietrich-bodied convertible. Our friends at the Cleveland History Center’s Crawford Auto-Aviation Collection brought something very special: a 1921 Model 101 believed to be the oldest surviving Lincoln automobile. 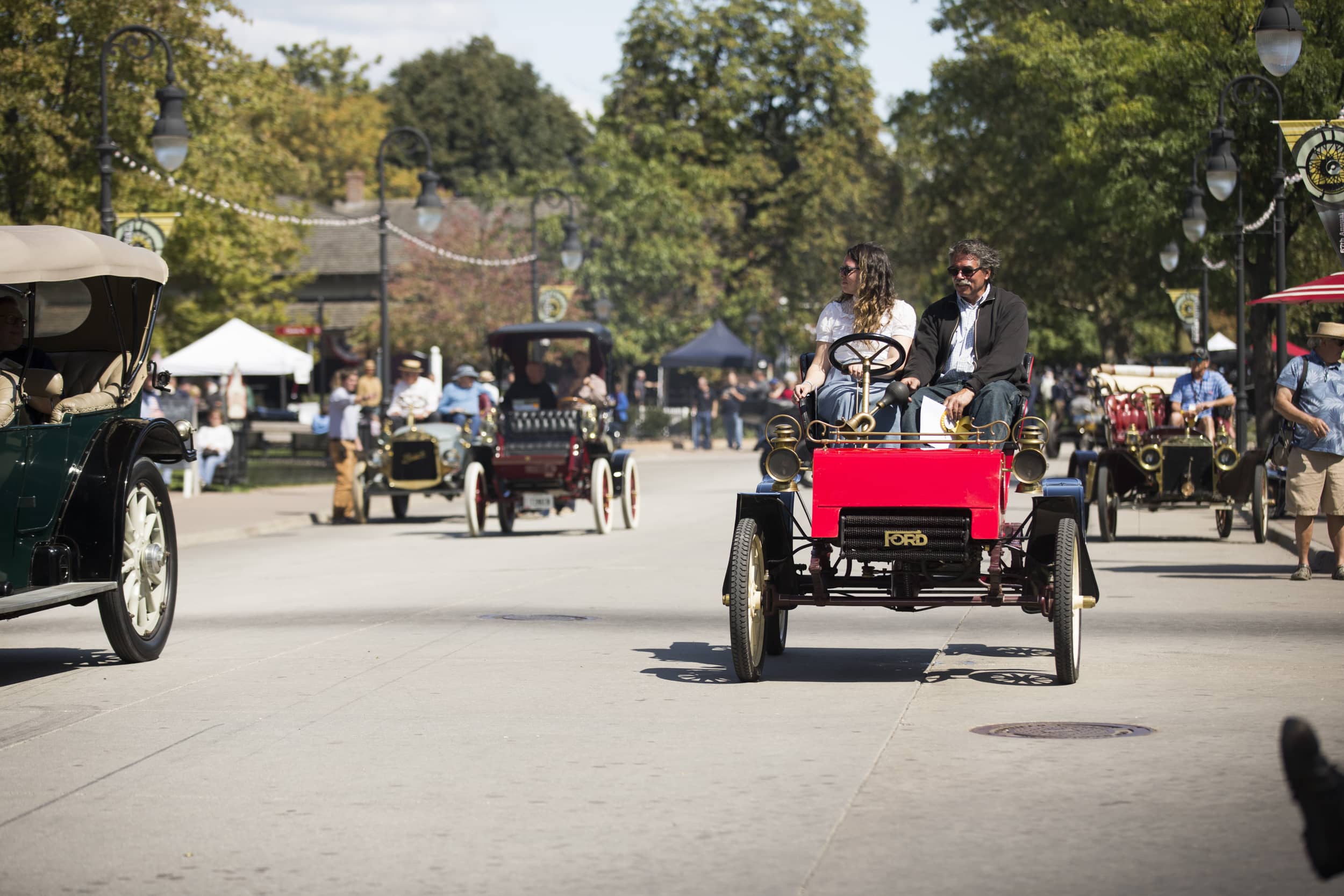 The earliest cars, like this red 1903 Ford Model A runabout, line up for their turn at Pass-in-Review.

Automotive enthusiasts had their pick of activities. There were the cars, of course, spread chronologically throughout the village. There were the Pass-in-Review parades, in which our expert narrators commented on participating vehicles as they drove past the Main Street grandstand. There were the car games, and continuing demonstrations by the Canadian Model T Assembly Team, in Walnut Grove. There were bicycle games near (appropriately enough) Wright Cycle Company. And there were presentations on various auto-related topics in Martha Mary Chapel and the Village Pavilion. Old Car Festival welcomed a few genuinely rare cars in addition to the wonderfully ubiquitous (Ford, Chevrolet, Dodge Brothers) and downright obscure (Crow, Liberty, Norwalk). Rarities this year included a 1913 Bugatti Type 22 race car (said to be the oldest Bugatti in North America) and a 1914 American Underslung touring car (purportedly the last vehicle produced by the company). 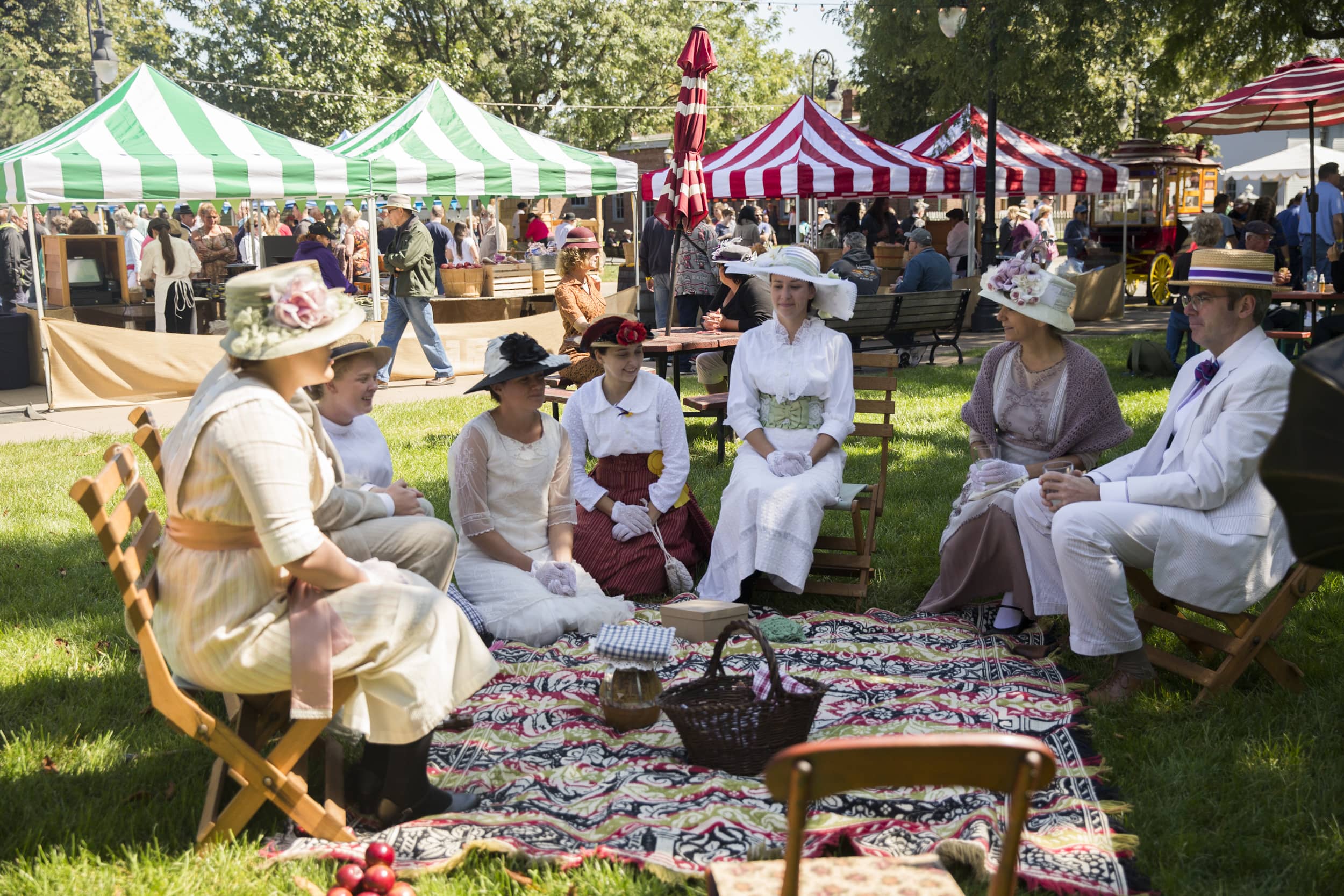 But this year, the cars were only the beginning. Greenfield Village hosted activities and historical “vignettes” keyed to each decade represented in the show. Aging Civil War veterans reminisced about Shiloh and Gettysburg at the Grand Army of the Republic encampment. Farther into the village, doughboys and nurses commemorated the centennial of America’s entry into the Great War. Sheiks and Shebas danced the Charleston at the bandstand near Ackley Covered Bridge. Southern blues resonated through the Mattox Home, evocative of the Great Depression’s bleakest years. Perhaps the most popular vignette, though, was the 1910s Ragtime Street Fair occupying the southern end of Washington Boulevard. Great food, games and dancing filled the street, all set to music provided by some of the most talented piano syncopators this side of Scott Joplin. 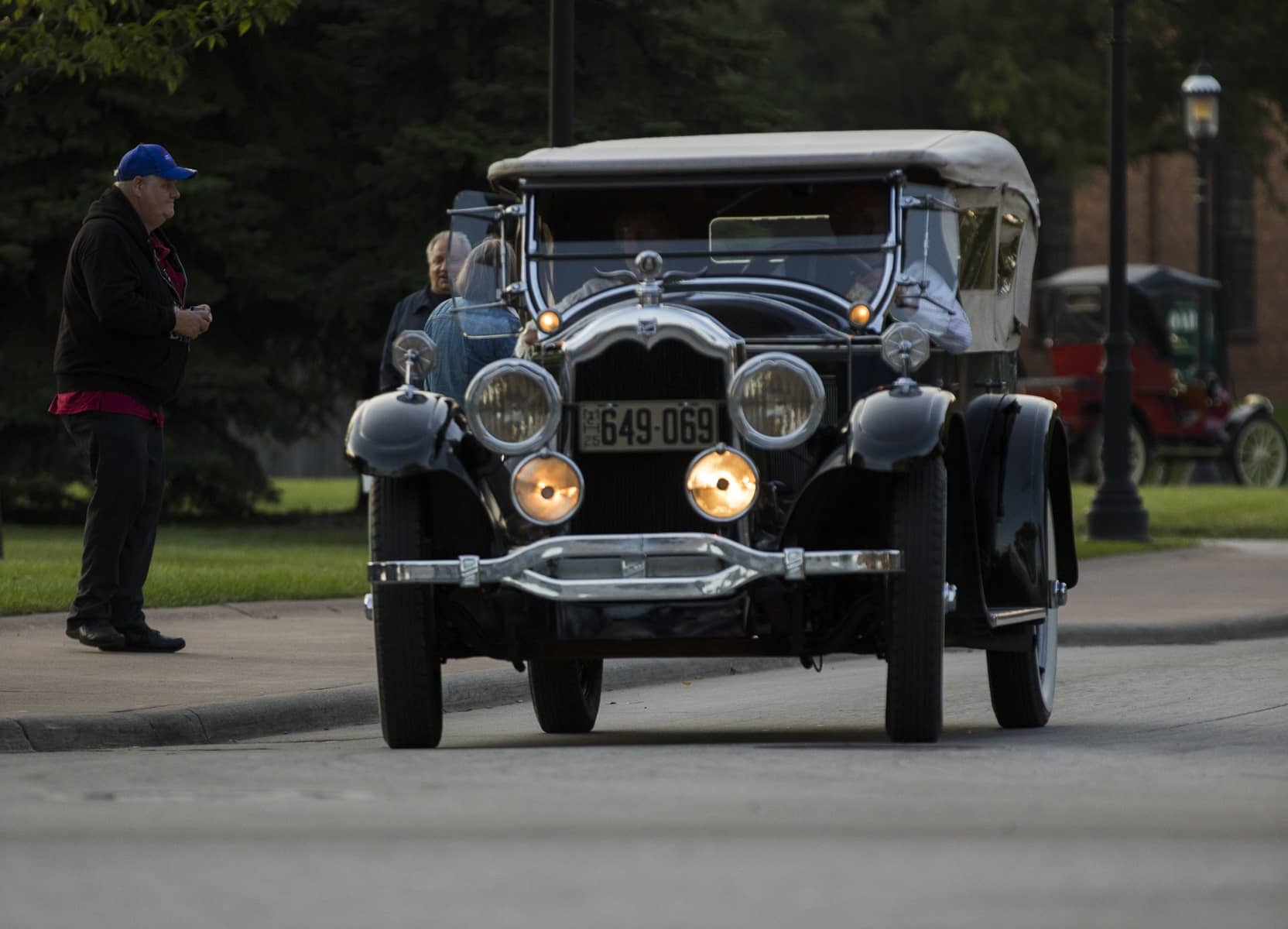 It’s magical when the sun sets and the headlamps turn on, like those on this 1925 Buick Master 6 Touring.

Longtime show participants and visitors will tell you that the highlight comes on Saturday evening. As the sun sets in the late-summer sky, drivers switch on (or fire up) their acetylene, kerosene and electric headlamps for the Gaslight Tour through Greenfield Village. Watching the parade, it’s hard to tell who enjoys it more – the drivers and passengers, or the visitors lined up along the route. This year’s tour was capped by a fireworks display at the end of the night.

It was a special weekend with beautiful automobiles, wonderful entertainment and – most of all – fellowship and fun for those of us who love old cars. Congratulations to the 2017 Old Car Festival Award Winners.