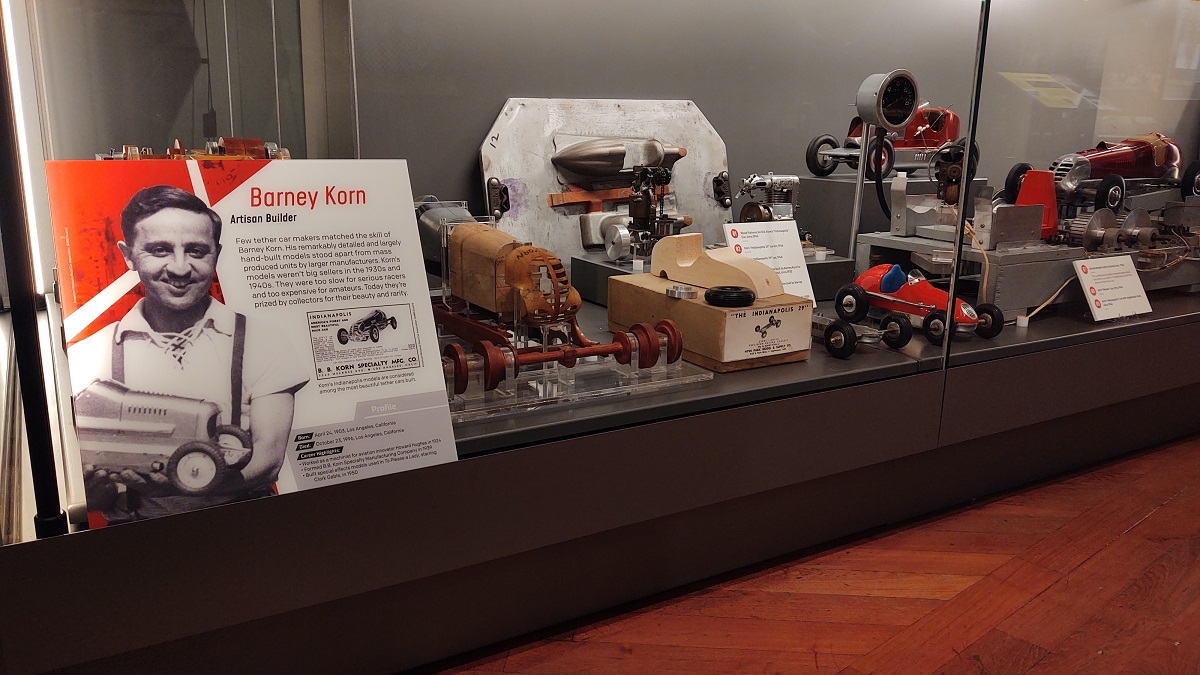 Barney Korn’s work is featured in The Henry Ford’s exhibit Driven to Win: Racing in America. / Photo by Matt Anderson

In the 1930s and 1940s, race fans who didn’t have the budget or the bravery for full-size auto racing could find big thrills in small scale through the world of tether cars. These gas-powered model cars were raced by adults in organized competition. The models either raced against the clock, running in circles while tethered to a pole, or they raced against each other on a scaled-down board track fitted with guide rails.

The fastest tether cars topped 100 miles per hour—real miles, not scale miles—which explains another name given to them: spindizzies. (Imagine watching a little car zooming around a pole and the name makes perfect sense.) Though they look like toys, these models could be expensive. By the time you bought the car, the engine, the tools, and the accessories, you could be looking at more than $100—at a time when you could by a Ford DeLuxe Convertible for well under $1,000. At the hobby’s peak, some 25 major manufacturers and hundreds of individual builders produced tether cars. But few makers matched the skill and craftsmanship of Barney Korn. 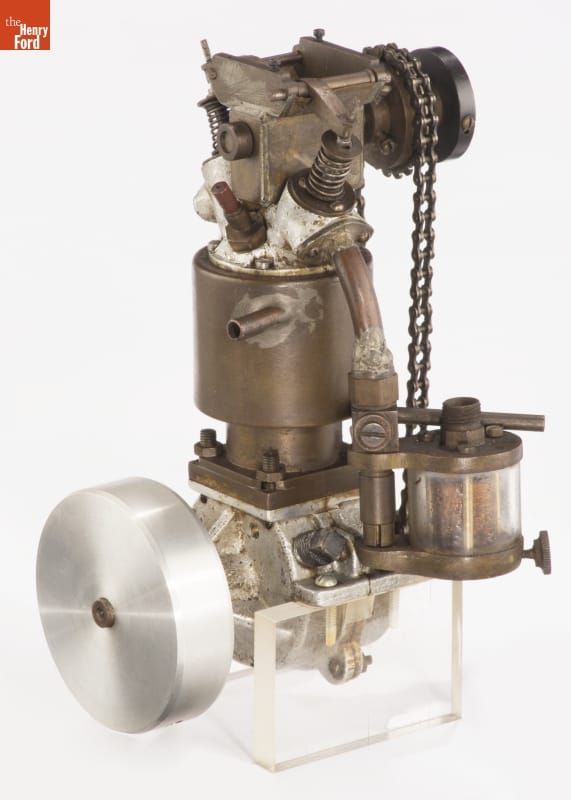 Barney Korn’s skill was apparent from his high school days, as when he built this working engine in shop class. / THF160779

Bernard Barney Korn was born in Los Angles on April 24, 1903. He showed his modeling talents at an early age, building an elaborate water-cooled model engine as a project for his high school shop class. After high school, Korn honed his skills in part by working as a machinist for aviation innovator Howard Hughes, whom he joined in 1924. 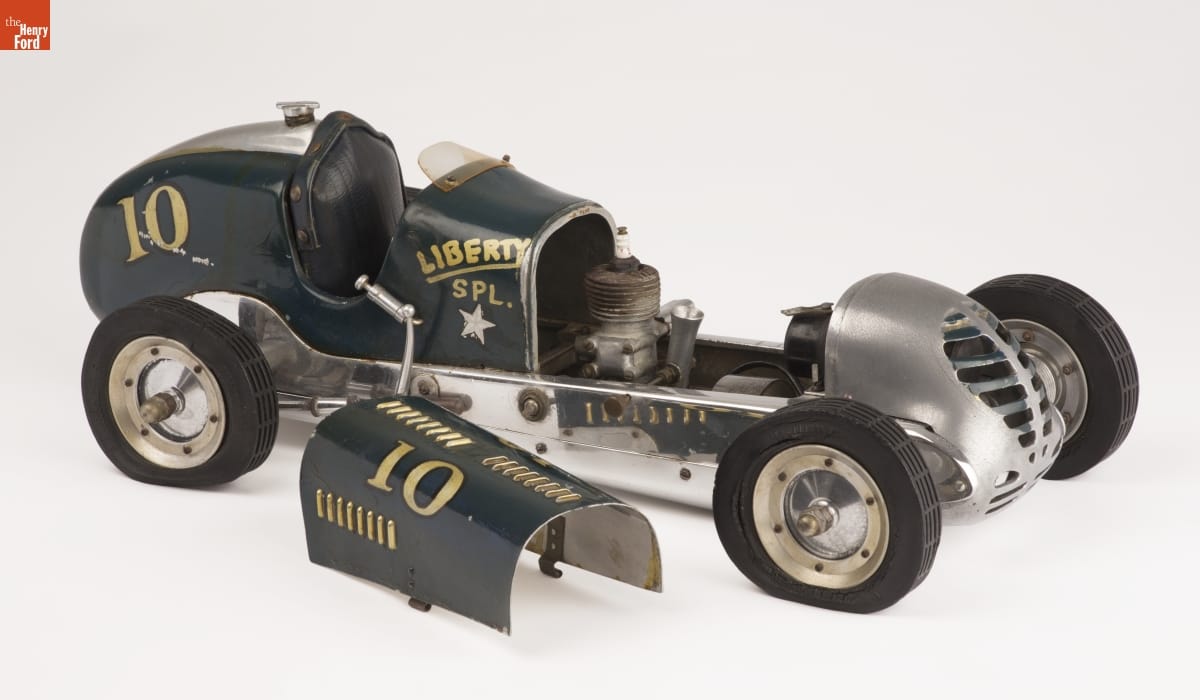 One of Barney Korn’s “Indianapolis” models, with the hood removed to expose the single-cylinder gas engine. / THF157084

As tether cars became more popular, Barney Korn joined the booming business and formed B.B. Korn Specialty Manufacturing Company in 1939. His first production model, the “Meteor,” was also his rarest. Only 18 examples are known to have been made. The following year, Korn began production of his best-known and, many would say, best-looking model: the “Indianapolis.” Based on real Indianapolis 500 race cars of the time, Korn’s “Indianapolis” was handsome and well proportioned. It was a big model, with an overall length over 20 inches. Many were also exceptionally detailed. The “Liberty Special” car even had a working compass in its dashboard! But the “Indianapolis” was rare too. It’s believed that Korn produced fewer than 70 examples in total. Most featured rear-wheel drive trains and aluminum bodies, though a few had lightweight magnesium bodies. When materials were restricted during World War II, Korn mixed and matched aluminum and magnesium components as needed. 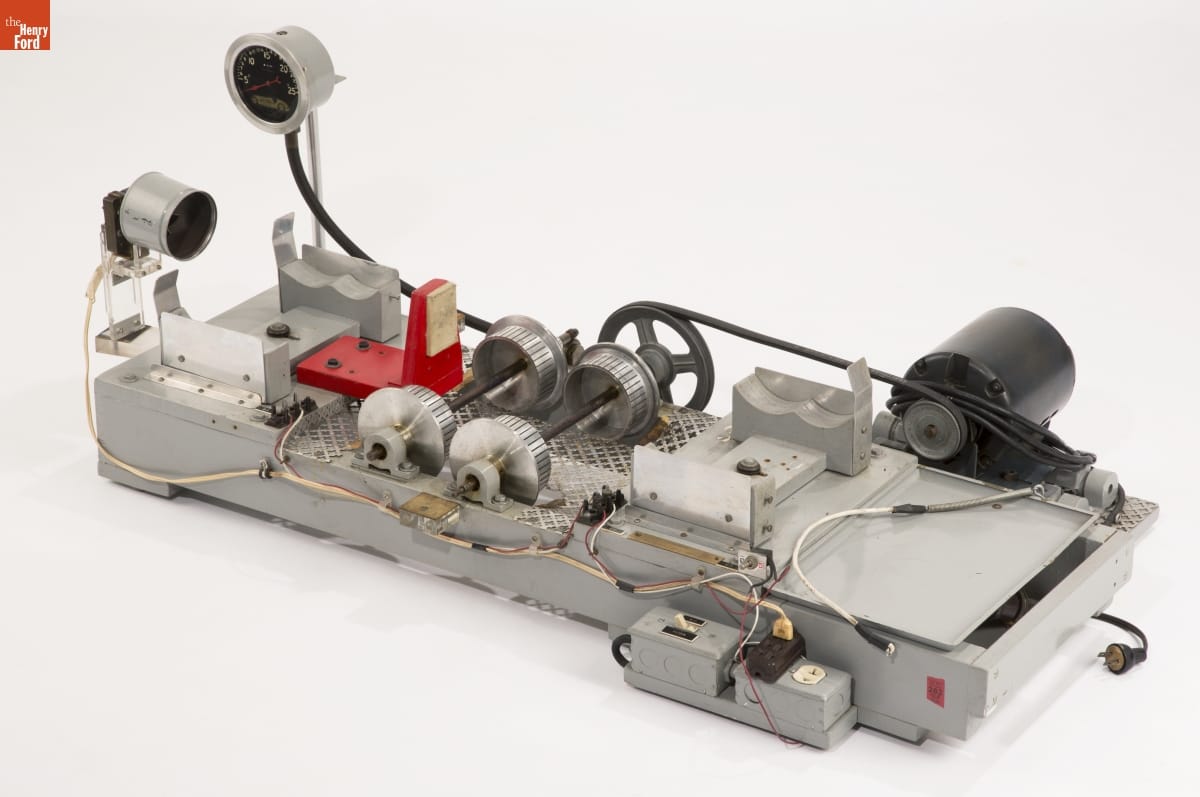 Barney Korn used precision tools, molds, and patterns to build his model cars. In a particularly impressive feat, Korn even built a working dynamometer to test his cars’ performance. Like full-size dynamometers, Korn’s version was basically a treadmill for engines. It allowed a model car’s drive wheels to spin while the car itself remained stationary. Korn’s dyno measured the power and torque of the .60-cubic inch engine as it delivered power to the wheels. The little dynamometer was even adjustable to accommodate both front and rear-wheel drive models. 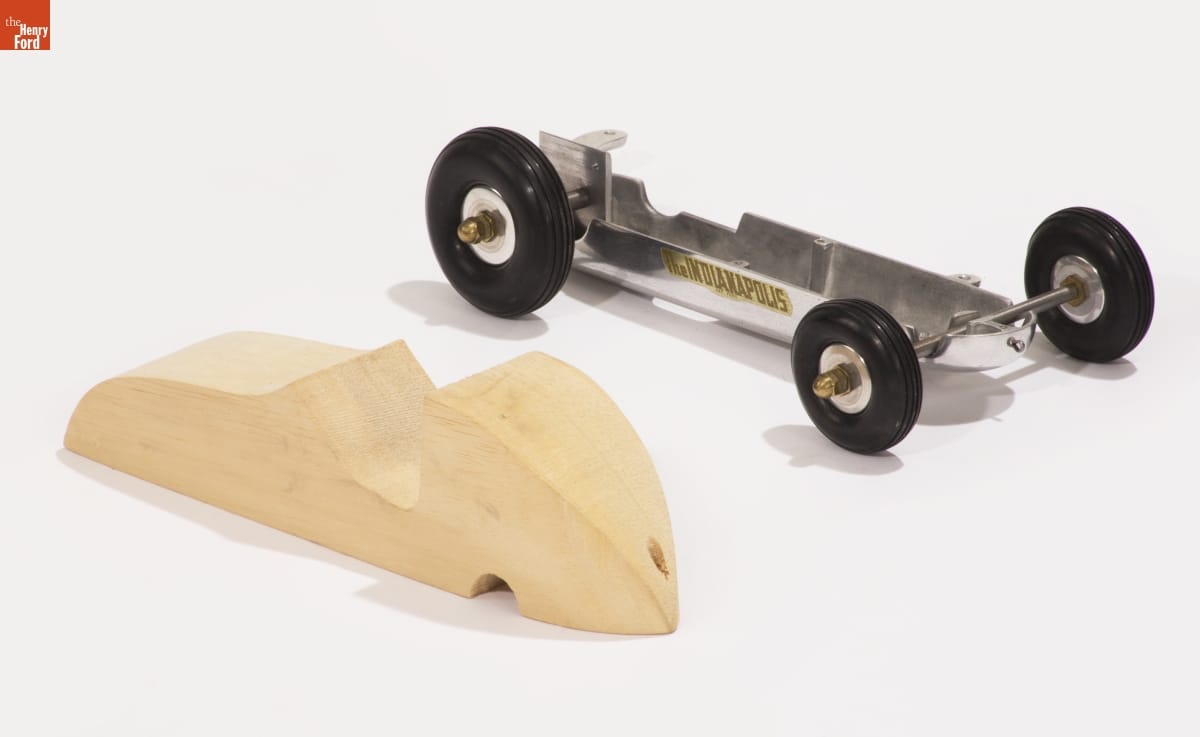 This unfinished Korn “Indianapolis 29” kit would have appealed to the budget-conscious tether car buyer. / THF162913

The B.B. Korn Manufacturing Company provided a few options for budget-conscious buyers. Instead of a standard “Indianapolis” model, they could purchase one of Korn’s “Indianapolis 29” cars. Everything about the “29” series was smaller—from the .29-cubic inch engines (source of the name), to the dimensions, to the all-important price tags. Those wanting to save even more could opt for an unassembled “Indianapolis 29” kit rather than a fully assembled car. With the kit, it was up to the buyer to finish rough edges on the balsa wood body, and to source an engine separately.

Barney Korn’s tether cars were beautifully made and carefully detailed, but that quality came at a price—in dollars and in performance. Korn’s models were too expensive for amateur hobbyists and too slow for serious racers. Poor sales made the B.B. Korn Manufacturing Company unsustainable, and it closed just a few years after it opened.

Barney Korn went on to a career in modelmaking for special effects work in films. His detailed miniatures can be seen in movies like To Please a Lady, a 1950 racing melodrama staring Clark Gable and Barbara Stanwyck, and Moby Dick, the 1956 adaptation of Herman Melville’s novel directed by John Huston. In the early 1980s, Korn even built a few improved versions of his original tether car designs.

Barney Korn died in Los Angeles on October 23, 1996, but his craftsmanship survives. Replicas of Korn’s models are readily available today, and originals are highly prized by collectors. It’s a proud legacy for a talented artist who some regard as the Leonardo da Vinci of the tether car hobby.