Welcome to the 1880s. Baseball fever is sweeping the country! Urban centers boast professional teams of paid, recruited players, like the Detroit Base Ball Club pictured on the trade card below, part of the National League from 1881 to 1888. (The Detroit Tigers were created in 1901, as part of the newly organized American League.) The Detroit Base Ball Club is gaining some notoriety. They'll win the pennant (the forerunner of the World Series) in 1887, beating the St. Louis Browns of the American Association in 10 out of 15 games. 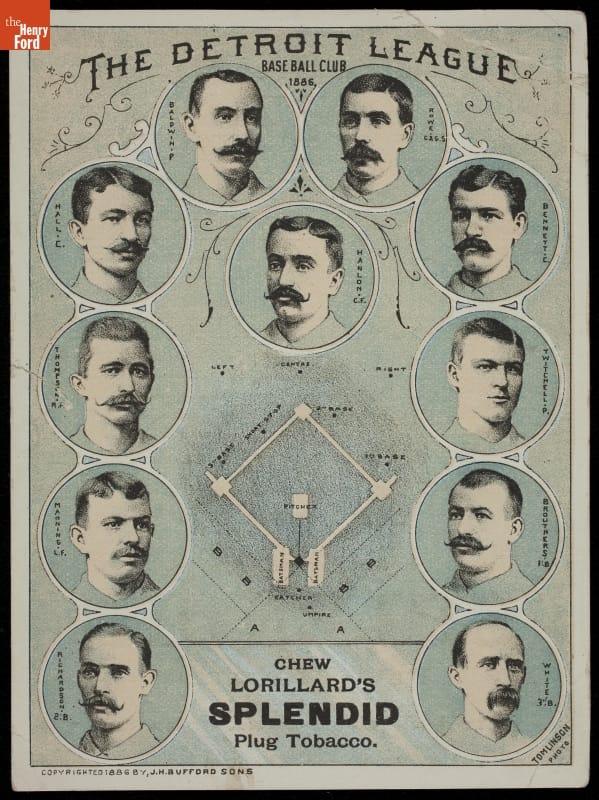 Chief among the team's heroes is star catcher Charley Bennett (pictured upper right). Charley is the first professional-league catcher to wear a chest protector outside his uniform. Detroit fans so adore him that they will name their first official ballyard Bennett Park. Charley is the team's "muscle"; center fielder and team captain Ned Hanlon (pictured center) is its "brains."

The passion for baseball is equally evident in small-town America. Amateur clubs show up just about anywhere that nine men can agree on a time and place to practice. Games against rival towns and villages engender fierce local pride. Over in the village of Waterford, Michigan, some country lads have formed a team called the Lah-De-Dahs. Their exploits are well documented in the local newspaper. On September 2, 1887, local fans will smile to read, "George Wager is the best catcher in the township and of the Waterford nine; if he fails to catch the ball with his hands he will catch it with his mouth." 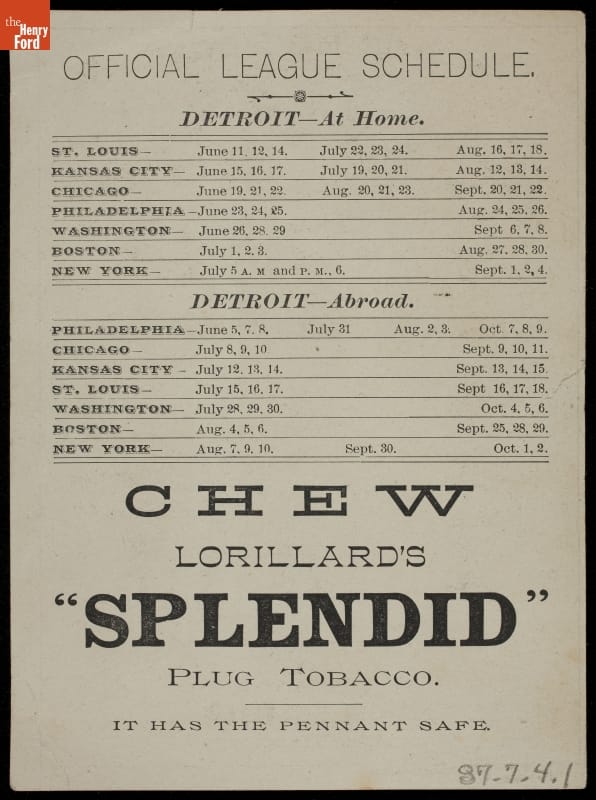 The back of the trade card features an ad for Lorillard’s “Splendid” plug tobacco, as well as the home and “abroad” schedules for Detroit. / THF225149

See the Lah-De-Dahs in Action

Would you like to see the Lah-De-Dahs in action? You can, every summer in Greenfield Village. Our own team borrows the look and playing style of an 1880s amateur baseball club like the original Waterford Lah-De-Dahs.

When you go to a Historic Base Ball in Greenfield Village game, you will notice some different baseball terminology. For example, instead of "batter up," the umpire will declare "striker to the line." When he notes "three hands dead," he simply means that the side is retired.

Visit a Historic Base Ball game this summer and learn some new terminology for yourself!


Donna R. Braden is Senior Curator and Curator of Public Life at The Henry Ford. This article was adapted from the May 1997 entry in our previous “Pic of the Month” online series.