Building a Brand… with Buildings 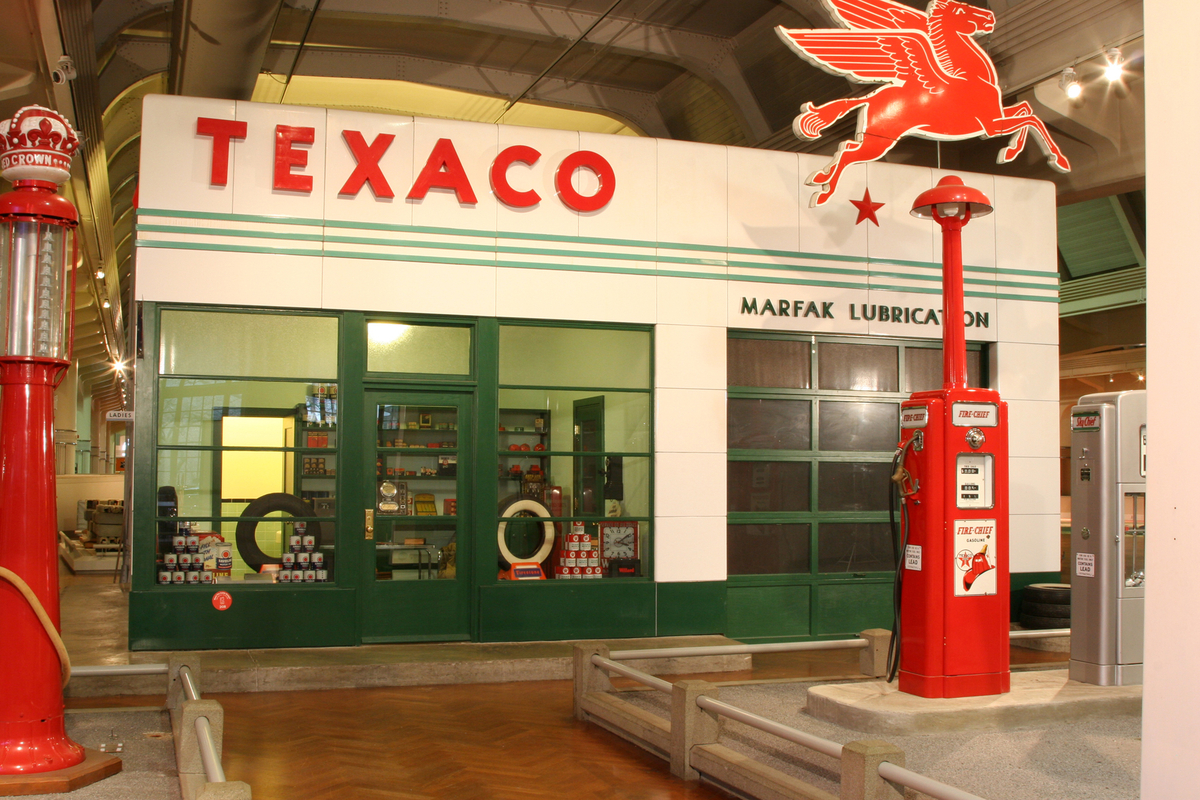 Thanks to Walter Dorwin Teague’s design, Texaco service stations projected a clean, modern and – perhaps most importantly – instantly recognizable image. (From the Collections of The Henry Ford.)

Walter Dorwin Teague’s Texaco Stations
Gasoline is a fiercely competitive business. We’ve all seen intersections with two, three, even four rival gas stations clumped together. Standing out from the crowd is a must. Over the years, retailers developed any number of ways to set themselves apart, including everything from unusual architecture to ultra-clean restrooms.  Brand identity – in whatever form it might be – was an essential part of the business.

The Texas Company, better known by the portmanteau Texaco, had its origins in the great Spindletop, Texas, oil strike of 1901, which suddenly had the United States awash in cheap petroleum. Unlike its competitors, which focused on regional markets, Texaco was determined from the start to build itself into a national brand. By 1942, the company had 40,000 outlets spread across the country. 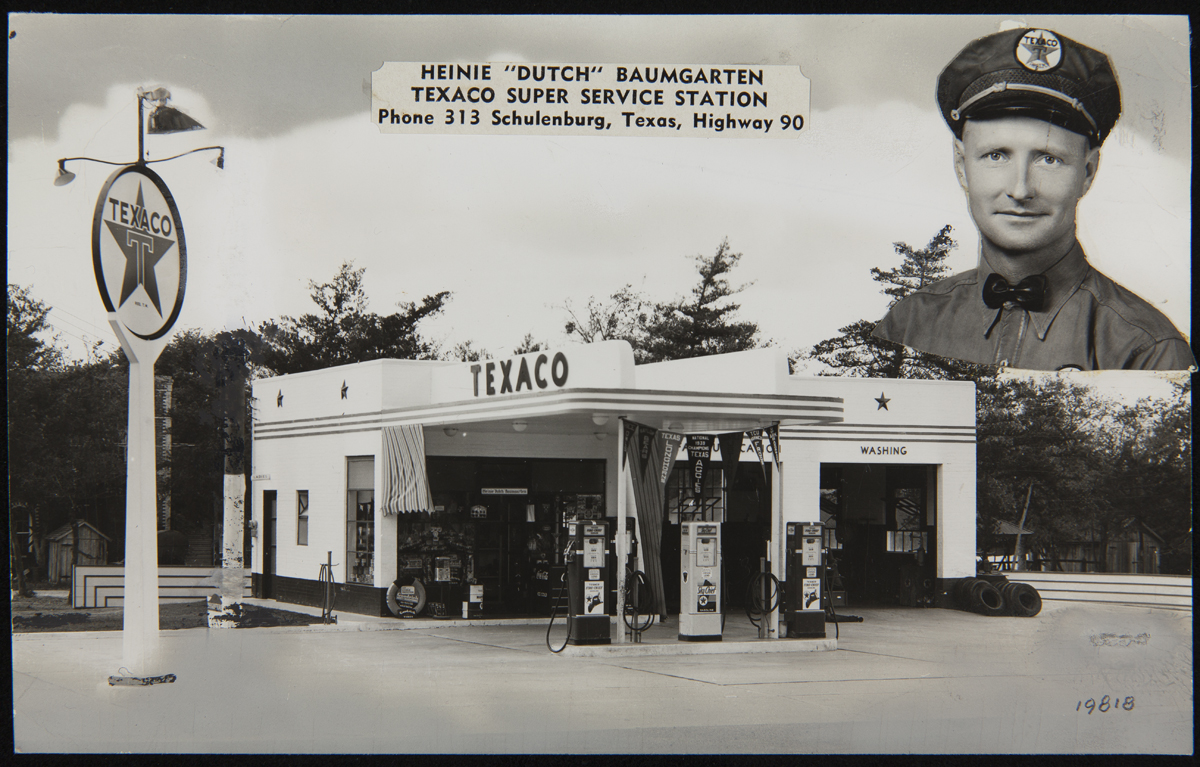 One of Teague’s Texaco stations in use – appropriately enough, in Texas. (John Margolies Roadside America Transparencies. From the Collections of The Henry Ford.)

In 1934, Texaco hired industrial designer Walter Dorwin Teague to create a fresh, unified look for the company’s service stations. Teague came up with a boxlike building covered in white porcelain enamel. Evocative of the then-popular streamlined look, Teague’s design simultaneously suggested speed, modernity and cleanliness. (And, with that porcelain exterior, it was easy to clean.) The gleaming white surface contrasted sharply with its surroundings, wherever the station was located, and readily caught motorists’ eyes. It was easy to illuminate at night, too – a significant benefit for retailers operating around the clock. In time, some 10,000 Teague stations were built across the United States, giving Texaco outlets a consistent appearance and identity.

The basic box building became popular with many of Texaco’s competitors, too. Eminently practical, the design provided space for an office/service counter, automobile service bays, storage, and the all-important restrooms. Furthermore, it could be expanded (or reduced), as business conditions warranted, without harming the building’s overall appearance. 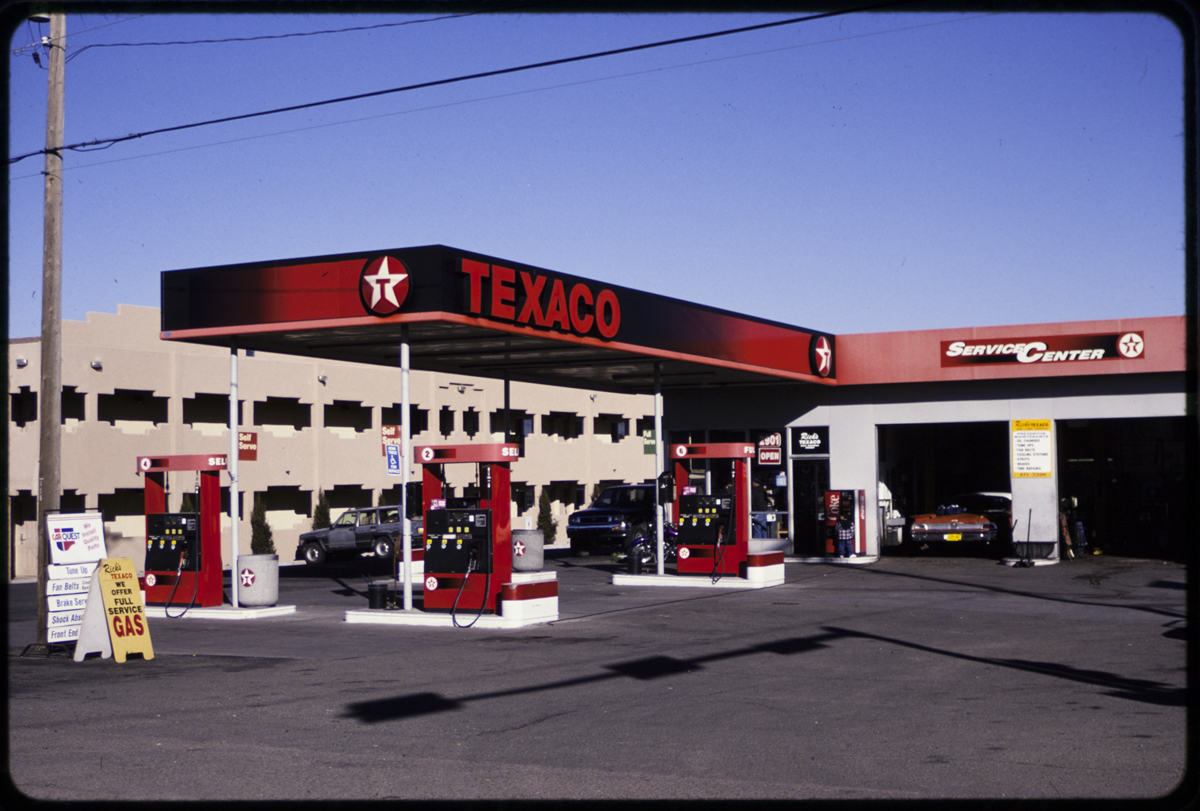 By the 1970s, porcelain enamel was out and darker concrete, brick and wood surfaces were in. (John Margolies Roadside America Transparencies. From the Collections of The Henry Ford.)

But what was fresh and modern in the 1930s was, inevitably, dull and outdated within a few decades. In the 1960s, oil companies began to move away from bright porcelain boxes in favor of more subdued brick facades and gabled roofs. By the 1980s, the box plan itself was superseded by the larger convenience stores we still see today. But Walter Teague’s design lives on in the Driving America exhibit. Our Texaco station was built and operated in Kingston, Massachusetts, before it came to Henry Ford Museum of American Innovation in 1987. The station may not be selling gas anymore, but the its gleaming porcelain still attracts plenty of visitors!