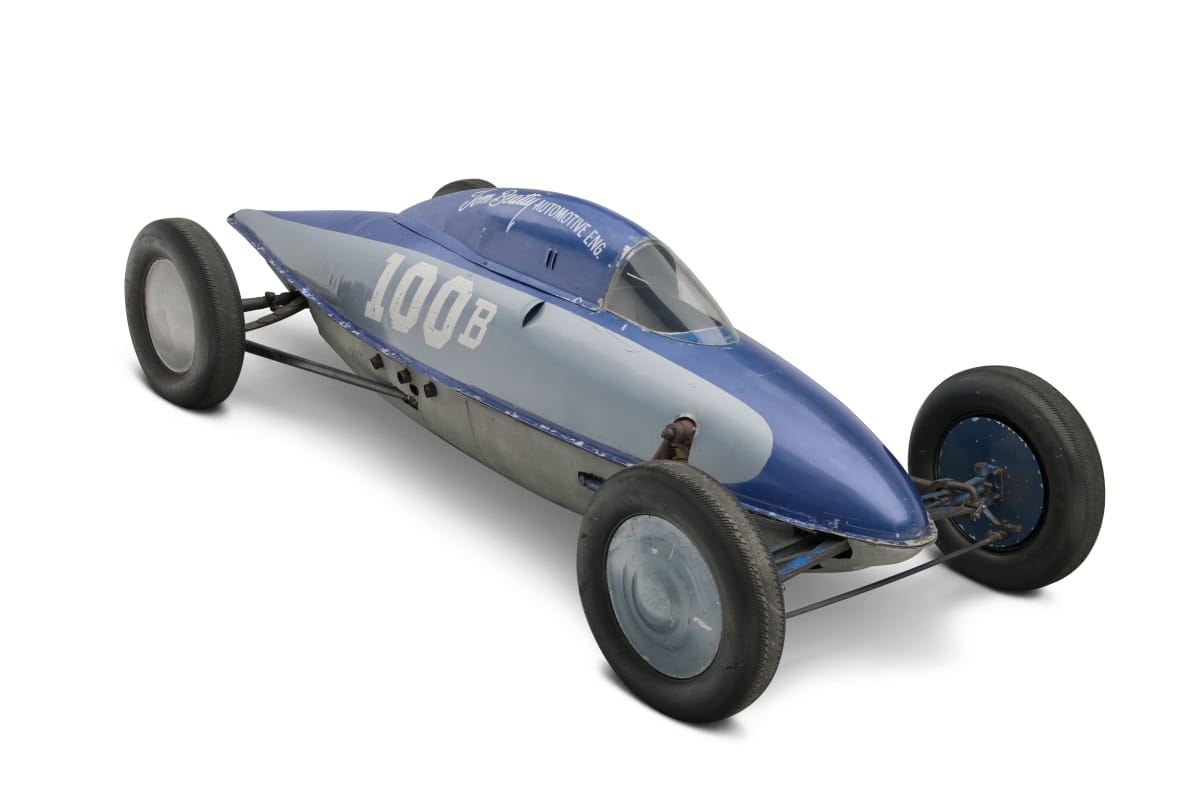 What do you get when you mix a war surplus fuel tank, an Oldsmobile engine, and a boatload of ingenuity? You get The Henry Ford’s latest automotive acquisition, the Lakester.

During World War II aircraft designers looking for ways to extend the range of fighter planes came up with the idea of hanging expendable auxiliary fuel tanks under the wings or fuselages of aircraft. These teardrop-shaped tanks could be jettisoned when they were empty. When Bill Burke, a California hot rodder serving in the Navy, saw some of these tanks on Guadalcanal, he thought they would make nifty bodies for streamlined racing cars. After the war, Burke put his idea into action.

Surplus drop tanks (also called wing tanks or belly tanks) were available for as little as $35. Burke squeezed an engine, driver’s seat, and running gear inside the tank, leaving the wheels and axles exposed. Burke raced the slick little car at El Mirage, a large, flat dry lake bed north of Los Angeles where hot rodders ran their vehicles in straight-away top speed runs against the clock. Other hot rodders soon copied Burke’s idea and over time the new cars came to be called “lakesters” because they were built to run at the dry lakes. 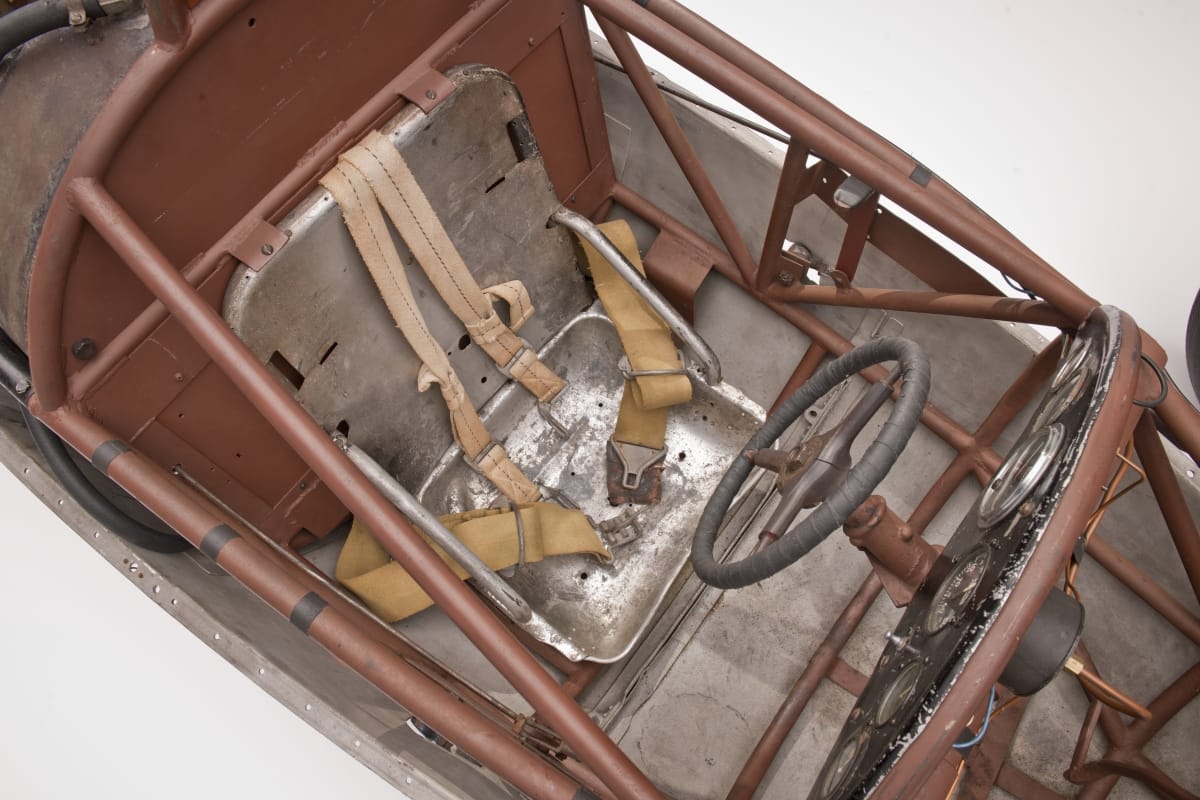 I have long wanted to add a lakester to The Henry Ford’s collection of race cars, because lakesters embody ingenuity and resourcefulness, and because they are peculiarly American. For years I have had my eye on one of the most successful and famous lakesters, a car built and driven by another California hot rodder, Tom Beatty. In 2009 the car came up for auction and we were finally able to acquire it.

Techno Talk Warning: The following paragraph is a technical description of Tom Beatty’s car for the benefit of “car geeks” (like the writer). If you are bored by discussions of chrome-moly tubing and swing axles, skip to the last paragraph.

Part of the attraction of Tom Beatty’s car is its sheer technical virtuosity. It looks like lots of other belly tank lakesters, but underneath the aluminum teardrop it is very different. Most lakester builders used a simple parallel rail frame, but Beatty welded up a complex space frame from chrome-moly steel tubing. It was stiffer and safer in an accident. Most lakesters ran without a rear suspension, but Beatty devised a swing axle independent rear suspension that helped the car maintain traction over the sometimes rough dry lake surface, or at the Bonneville Salt Flats. 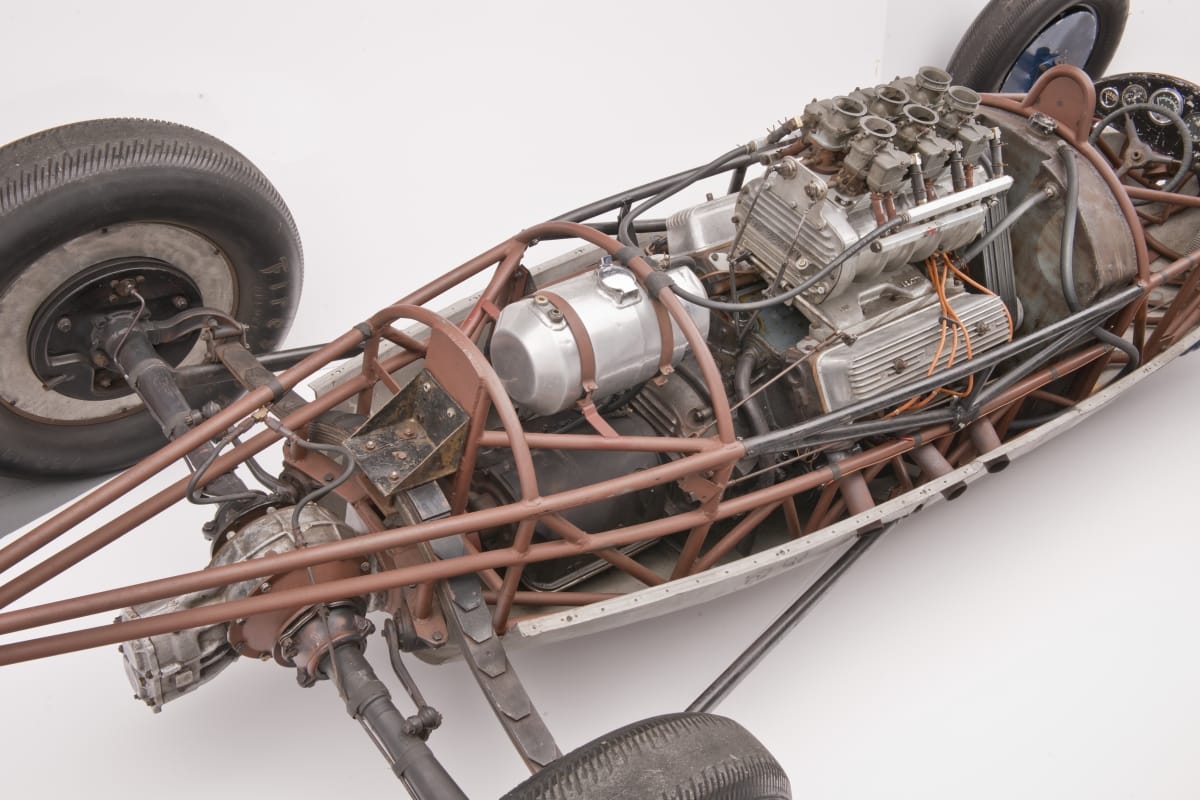 Engine and Drivetrain on the 1951 Beatty Belly Tank Lakester / THF90115

Beatty was also one of the first hot rodders to experiment with supercharging, adapting GMC blowers to his flathead Ford engines. The car first ran at the 1951 Bonneville Speed Week, turning a top speed of 188.284 mph. Over the years Beatty kept improving the car, moving to supercharged Oldsmobile engines in 1959. By the time Beatty retired from racing after 1965 season, the lakester had gone 243.438 mph, and was the oldest car running at Bonneville.

As it sits on the floor of Henry Ford Museum, Tom Beatty’s car looks a little rough. The paint is chipped and the body is dinged. But it looks today much as it did the last time it ran in anger at Bonneville, and we will not restore it. We will do only what is necessary to preserve it. After all, you don’t mess with an American original.


Bob Casey is former Curator of Transportation at The Henry Ford. This post was last updated in March 2021.