The Henry Ford’s Model i learning framework identifies collaboration as a key habit of an innovator. When considering inspirational collaborators from our collection, Charles and Ray Eames immediately came to mind. So, as part of The Henry Ford’s Twitter Curator Chat series, I spent the afternoon of June 18th sharing how collaboration played an important role in Charles and Ray Eames’ design practice.  Below are some of the highlights I shared.

First things first, Charles and Ray Eames were a husband-and-wife design duo—not brothers or cousins, as some think! Although Charles often received the lion’s share of credit, Charles and Ray were truly equal partners and co-designers. Charles explains, "whatever I can do, she can do better... She is equally responsible with me for everything that goes on here." 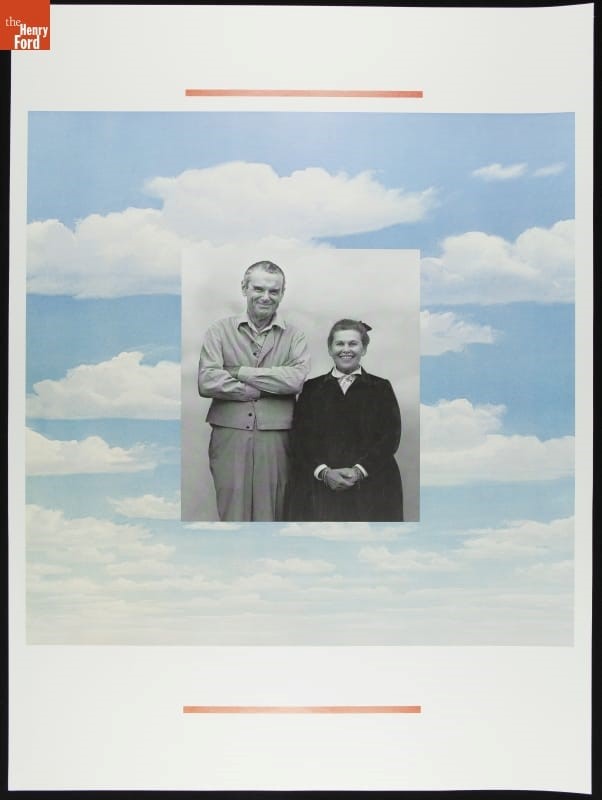 So when you see early advertisements that don’t mention Ray Eames as designer alongside Charles, know that she was equally responsible for the work. Here’s one such advertisement from 1947. 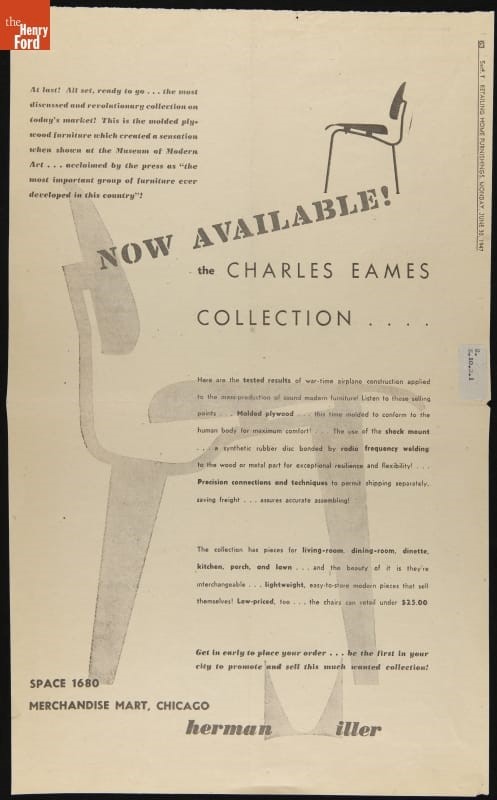 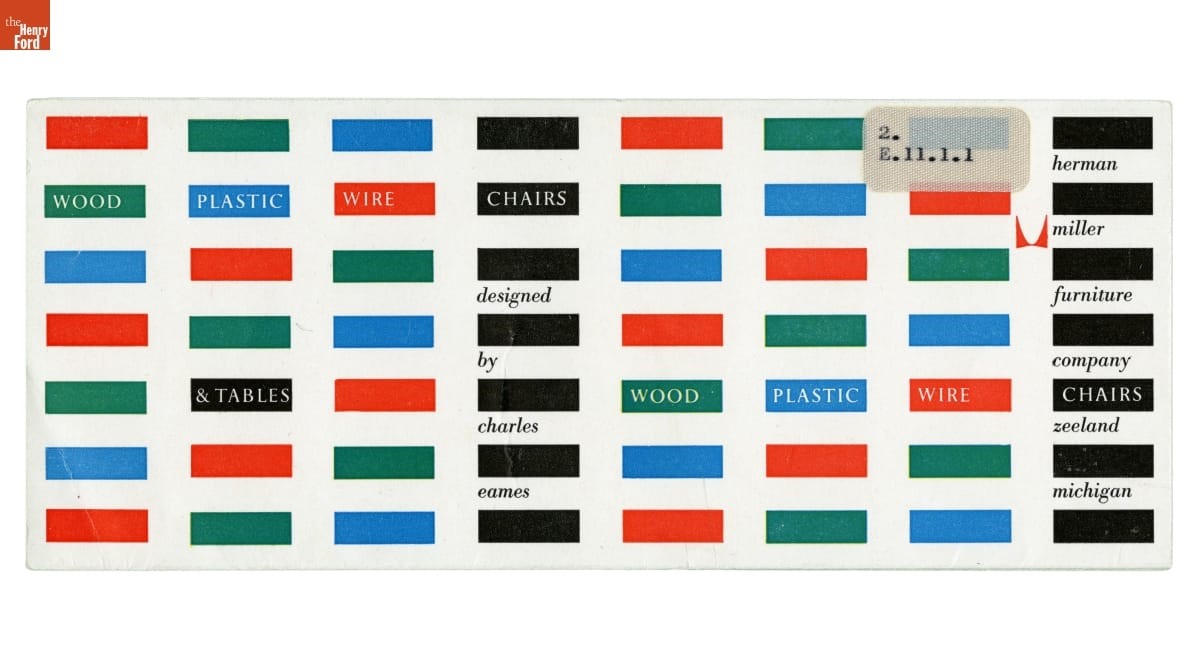 For more on Ray’s background and vital role in the Eames Office, check out this article from the New York Times, as part of their recently-debuted “Mrs. Files” series.

Charles and Ray Eames were experimenting with plywood when America entered World War II. A friend from the Army Medical Corps thought their molded plywood concept could be useful for the war effort—specifically for a new splint for broken limbs. Metal splints then in use were heavy and inflexible. Charles and Ray created a molded plywood version and sent a prototype to the U.S. Navy. They worked together and created a workable—and beautiful—solution for the military. 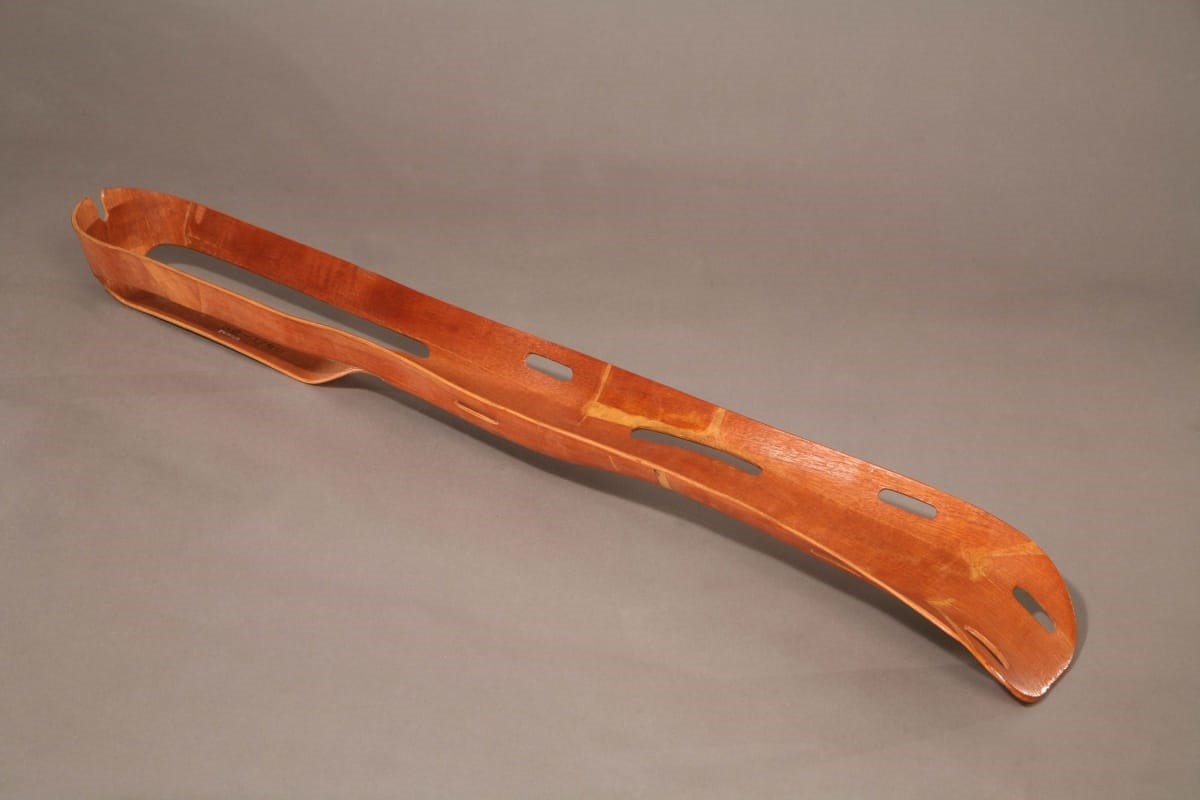 Out of these molded plywood experiments and products came the iconic chairs we know and love, like this lounge chair. 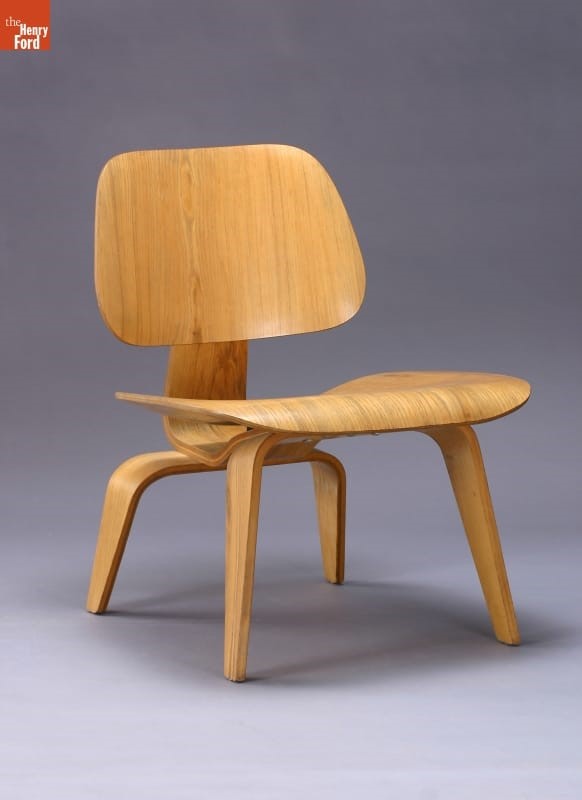 Around 1949, Charles brought a mock-up of a chair to John Wills, a boat builder and fiberglass fabricator, who created two identical prototypes. This is one of those prototypes—it lingered in Will's workshop, used for over four decades as a utility stool. The other became the basis for the Eames’ single-shell fiberglass chair. 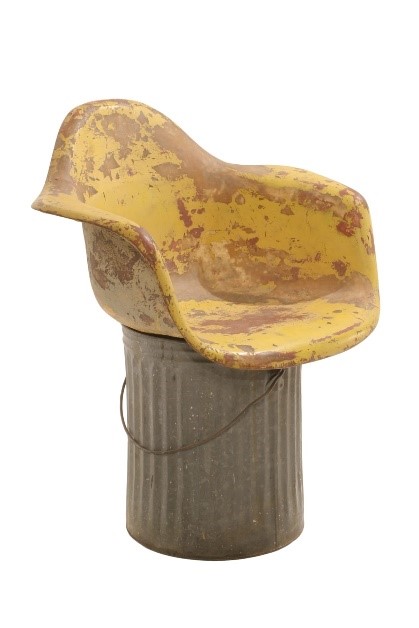 Charles and Ray recognized when their expertise fell short and found people in other fields to help them solve design problems. Their single-shell fiberglass chairs became a rounding success. Have you ever sat in one of them? 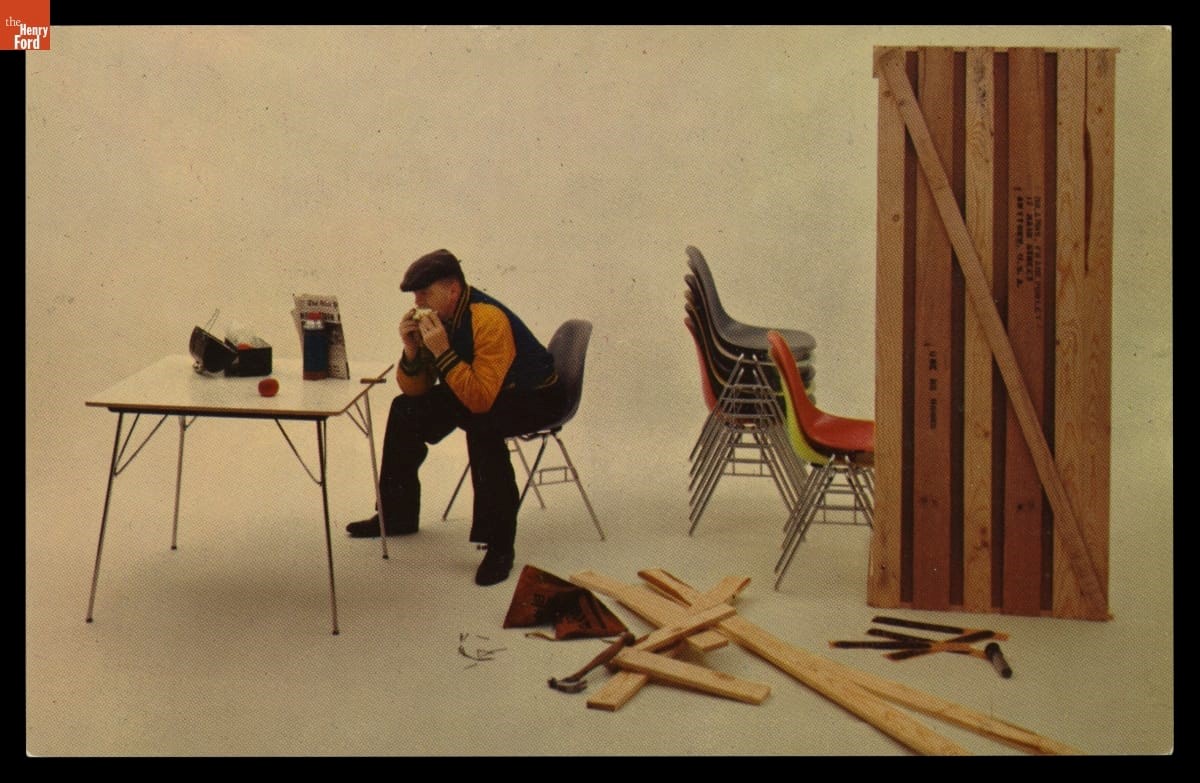 If you’ve been to the museum in the past few years, you’ve surely spent some time in another Eames project, the Mathematica: A World of Numbers…and Beyond exhibit. This too was a project full of collaborative spirit!

While those of us not mathematically inclined might have a hard time finding math fun, mathematicians truly think their craft is fun. Charles and Ray worked with these mathematicians to develop an interactive math exhibit that is playful. 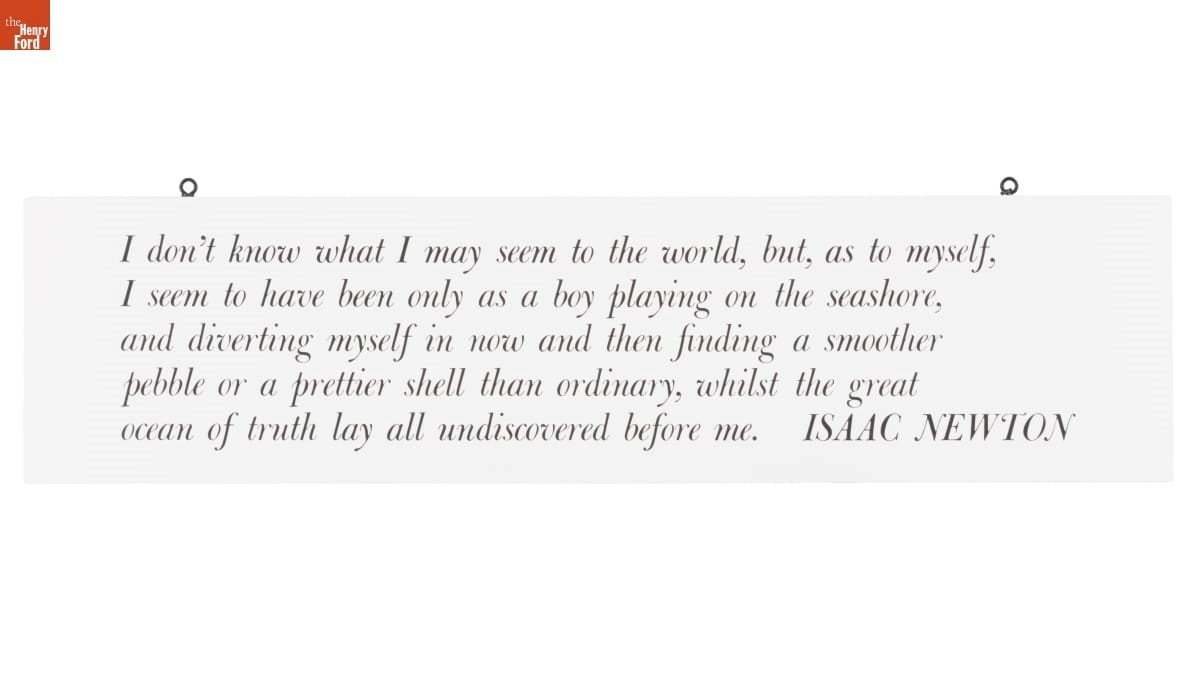 Charles Eames said of science and play, “When we go from one extreme to another, play or playthings can form a transition or sort of decompression chamber – you need it to change intellectual levels without getting a stomachache." 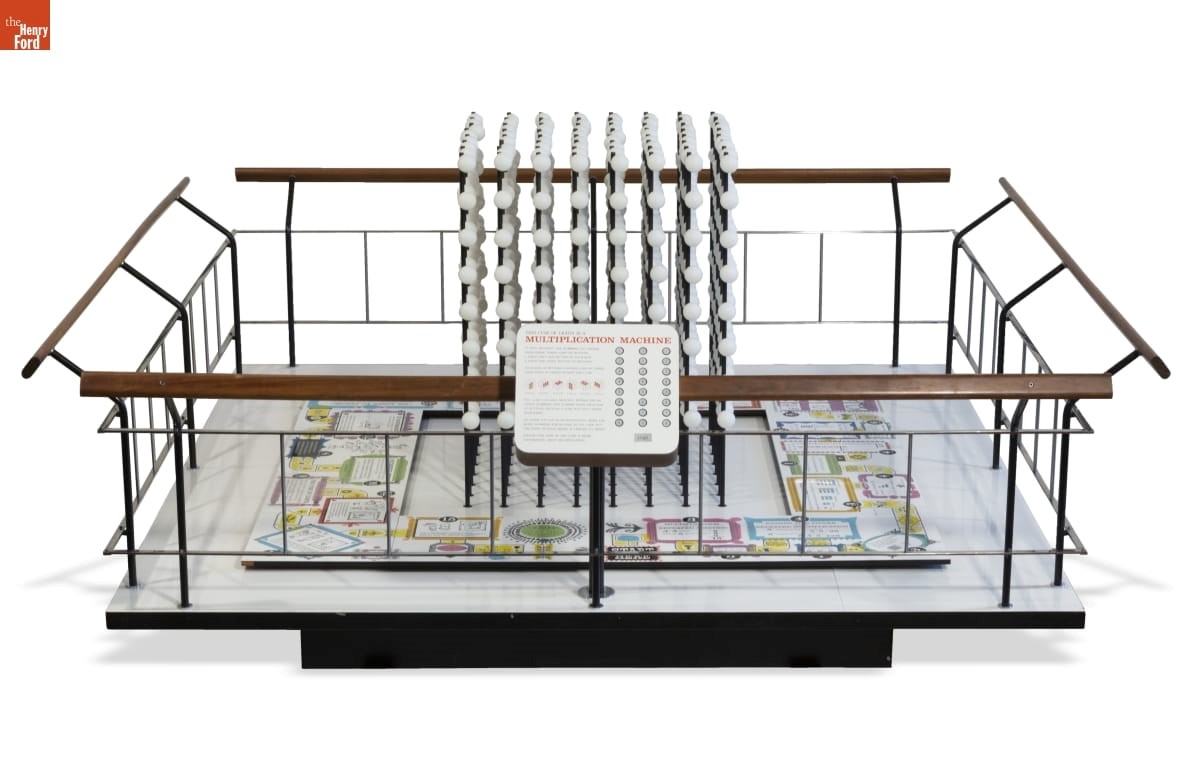 Charles and Ray Eames sought out expertise in others and worked together, understanding that everyone can bring something valuable to the table. This collaborative spirit allowed them to design deep and wide—solving in-depth problems across a multitude of fields.

Katherine White is Associate Curator, Digital Content, at The Henry Ford. For a deeper dive into this story, please check out her long-form article, “What If Collaboration is Design?”