Classical Details: A Close Look at the Noah Webster Home 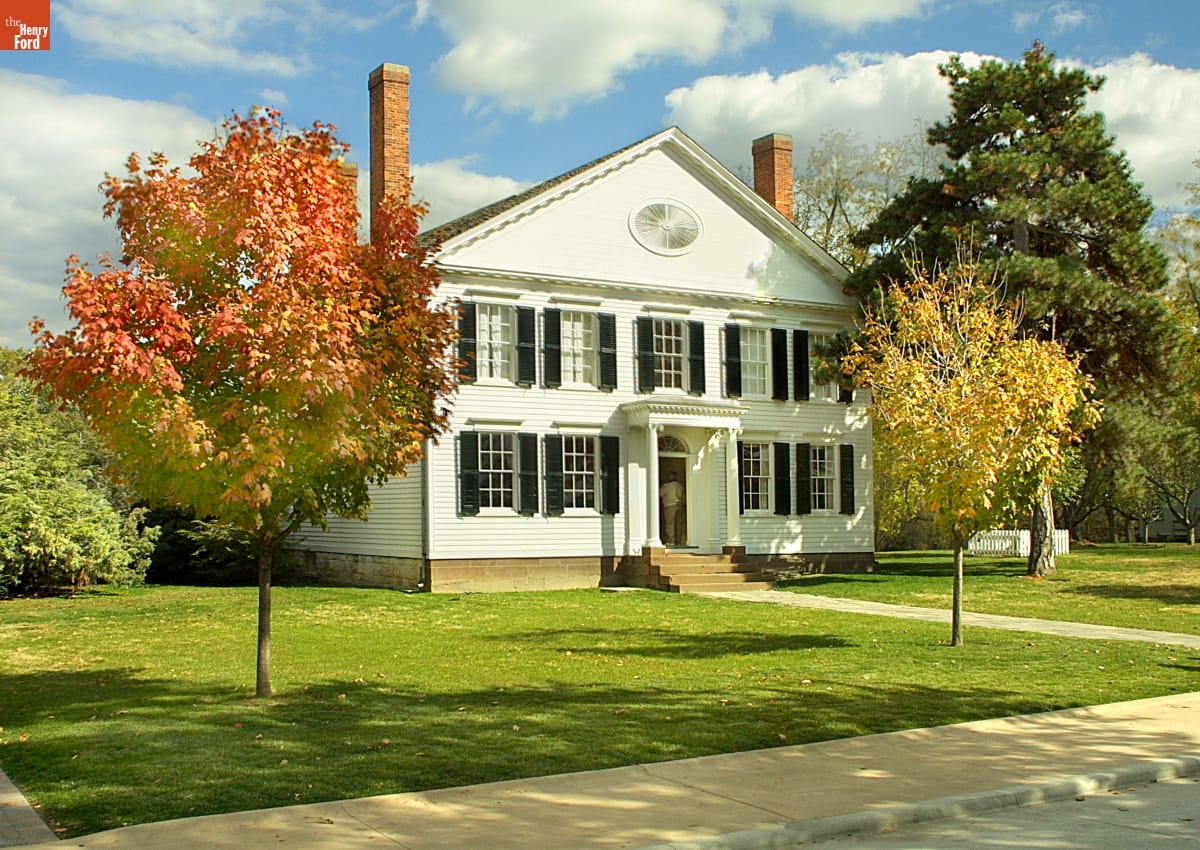 The Noah Webster Home in Greenfield Village was originally designed and built in New Haven, Connecticut, over the course of 1822 and 1823. The home, designed by David Hoadley, is built in the Classical Revival style, popular in the first quarter of the nineteenth century.

The house is loaded with wonderful classical details, some of which include carved Ionic capitals topping solid chestnut fluted columns on the front portico (very appropriate, as they represent wisdom in the Greek order), fluted pilasters (rectangular columns) with side lights and a fan light (window) over the front door, and interesting wooden mutules (large decorative wooden blocks with holes evenly drilled over the surface) lining the underside of the cornice or the soffit. Mutules are elements found on ancient Greek and Roman temples and were originally decorative elements found on rafter ends. The cornice surrounds the pediment (the triangular portion) on the front of the house and runs under the eaves or soffit all around the perimeter. The front portico of the Noah Webster Home features fluted columns with carved Ionic capitals. The soffit of the roof includes dentil details (more below) and a very fine bead trim at the lower edge. The doorway’s fluted pilasters carry through the column elements with the same carved Ionic capitals. The front door with its fan light is a reproduction based on original examples found in the New Haven region, and the door hardware is also a reproduction of a fine imported English lock set. The porch, steps, and column plinths, along with the front foundation blocks, are all brownstone. / Photo by Jim Johnson 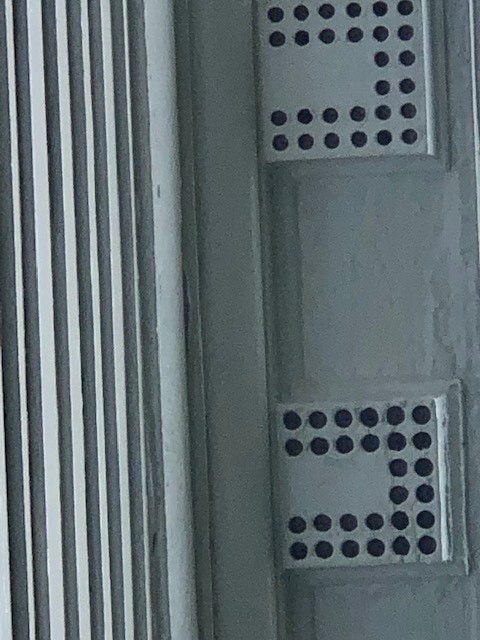 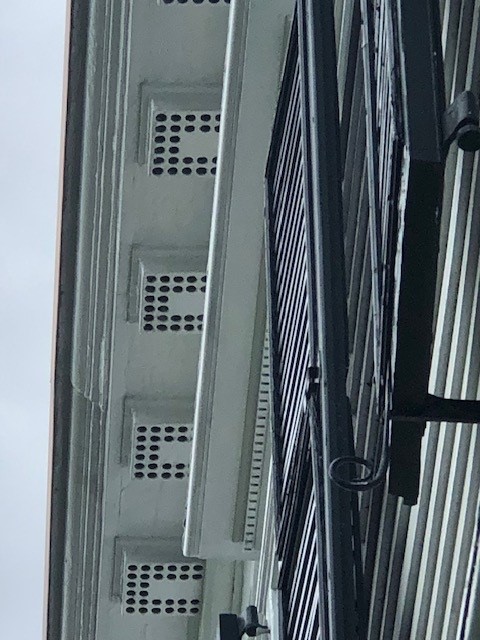 The above shots show details of the mutules on Webster Home. These architectural ornaments were inspired by details found on ancient Greek and Roman temples, and were often seen as ornamentation for rafter ends that would extend under the eave. The details within the mutules were completed in sets of six and could also include “drops” and additional elements that would connect at a right angle to the frieze below the eave cornice. Our examples use a round drilled pattern in sets of six. / Photos by Jim Johnson

All the windows have decorative lintels (horizontal supports at the top), which are further decorated with rows of small blocks known as dentils, because they indeed look like rows of teeth. So, our Webster Home has lintels with dentils. The cornice of the front portico (a roof supported by columns) also features a larger set of dentils, and a very delicate bead molding on the edge of the cornice. 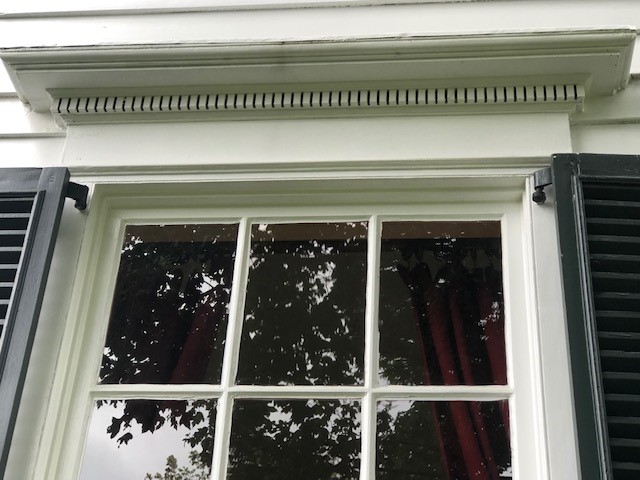 The photos above show details of the decorative window lentils, ornamented with dentils, small wooden blocks that resemble rows of teeth. / Photos by Jim Johnson

Another interesting note about the front façade of the building has to do with the center second-floor window over the portico. Originally, there was not a real window in that opening—it was a dummy window originally included to balance the fenestration (design of the window and door openings) on the façade of the house. All the original site photos show that window with a closed set of blinds (note that shutters are solid covers, whereas blinds have louvers). In recent years, I have worked with our carpentry staff to permanently close the blinds of the “new” window added to the house by Edward Cutler in 1936 in order to return the front of the house to its original appearance. 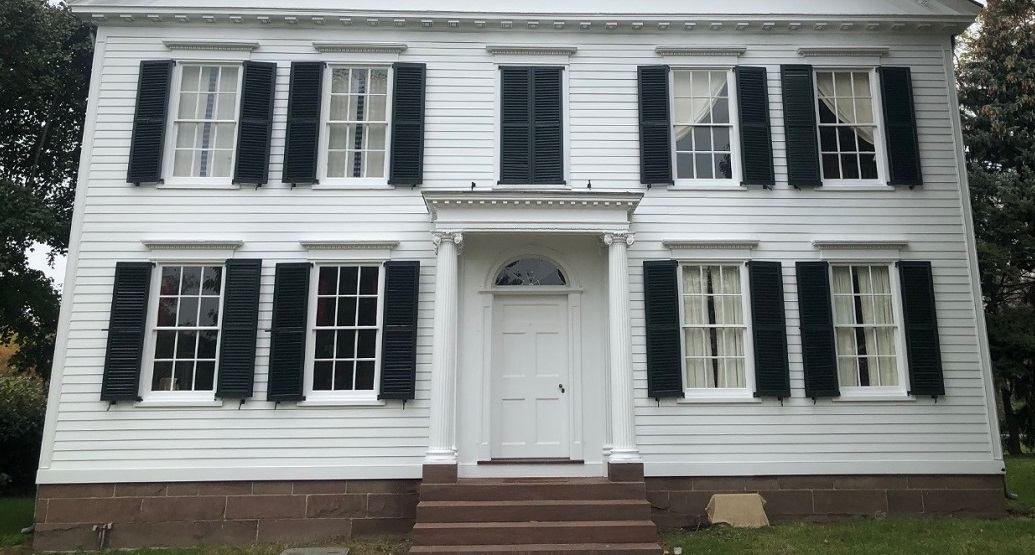 There was never an actual window in the second-floor center opening. The closed blinds create the illusion of a window that balances the front façade with equal openings top and bottom. / Photo by Jim Johnson

All of these above-mentioned decorative elements continue into the rear of the house, including a very charming small back porch that features transom windows over both back doors and fluted columns with carved Ionic capitals. Also at the rear is the third-floor attic that features a pair of quarter-moon windows, a style immortalized in the house from The Amityville Horror. (This is not lost on an entire generation of our movie-going guests, so we light those windows red for Hallowe’en in Greenfield Village.) 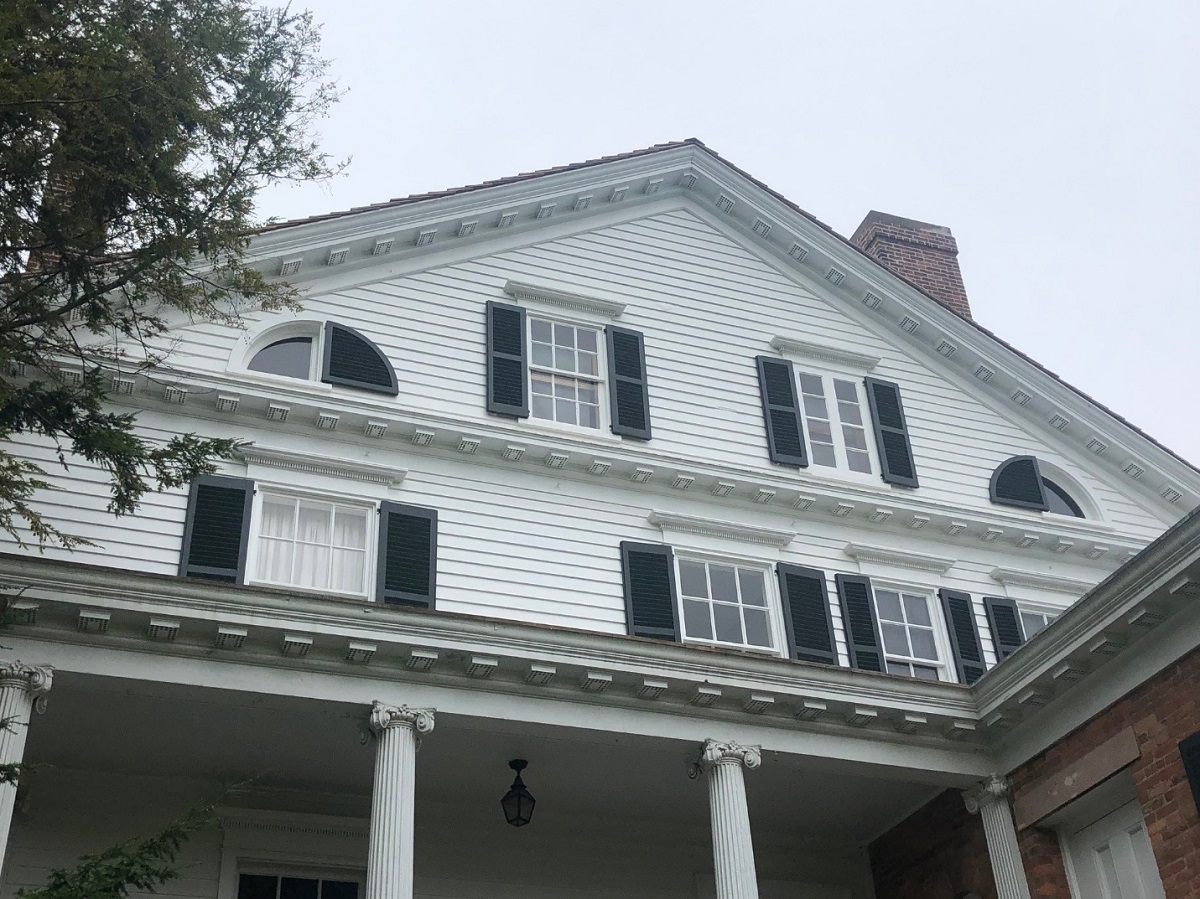 Quarter moon windows on the rear elevation provide light for the attic stairway. The decorative mutule elements can clearly be seen on the soffit of the entire cornice, including the later brick addition. / Photo by Jim Johnson

I should note that due to significant changes to the rear of the house in the nineteenth century, and its reconstruction into a hillside in Greenfield Village, many alterations were made. But, in doing so, the original architectural features were carried forward with excellent craftsmanship and design. 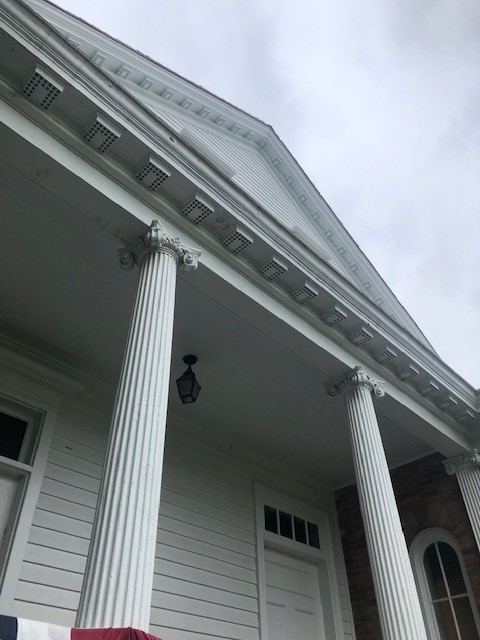 These images show the architectural details of the rear portico. Because of significant changes to the rear of the house in the 1860s, and its reconstruction into a hillside in Greenfield Village, modifications were made to the backside. None the less, original architectural elements were carried through with very high levels of craftsmanship and design. / Photos by Jim Johnson

If all these beautiful details were not enough, front and center in the triangular pediment on the front elevation, acting as a focal point, is a louvered ellipse (oval), which was undoubtedly handmade by a master craftsman (anonymous to us today) in New Haven in 1822. It consists of thin pieces of wood that create a louvered fan radiating from a carved central floret design, all set in a wooden oval frame, or ellipse. Though wonderfully decorative, it also served a function, allowing air and some light into the attic space. In letters sent by Rebecca Webster to Noah Webster while he was away on a long overseas research trip in the 1820s, Rebecca mentions laying out pippins (apples) in the attic.

Mary died in 1860 and Henry remarried, thus ending the direct Webster association with the house. Henry took on the renovations of the house with his second wife to make the house more fashionable, both inside and out. In doing so, most of the original Federal-style architectural elements were removed, primarily inside, and were replaced with heavy dark walnut woodwork, doors, and a carved staircase. The interior updates also included marble fireplace surrounds and plaster medallions in all the main room ceilings.

The exterior alterations and additions take the form of one- and two-story bay windows and a large brick addition to the rear of the house. A new Italianate-style dark walnut front door and surround was also installed. Surprisingly, many of the early-nineteenth-century architectural decorative elements were included within the Victorian/Italianate additions, likely to create continuity. This can be seen in the early-twentieth-century photographs that show that mutules have been added to the soffits of all of the 1860s bay windows and the brick addition. At some point, likely in the early twentieth century, all the windows were replaced with large one-over-one pane sashes. This image, taken March 31, 1934, as part of the Historic American Building Survey, shows the Webster Home on its original site at the corner of Temple and Grove Streets in New Haven, Connecticut. It clearly shows the late 1860s Italianate additions in the form of second-floor bay windows, an Italianate-style front door and surround, and updated one-over-one pane windows. The house was in use as a dormitory by Yale University at the time this photograph was taken. / THF236363 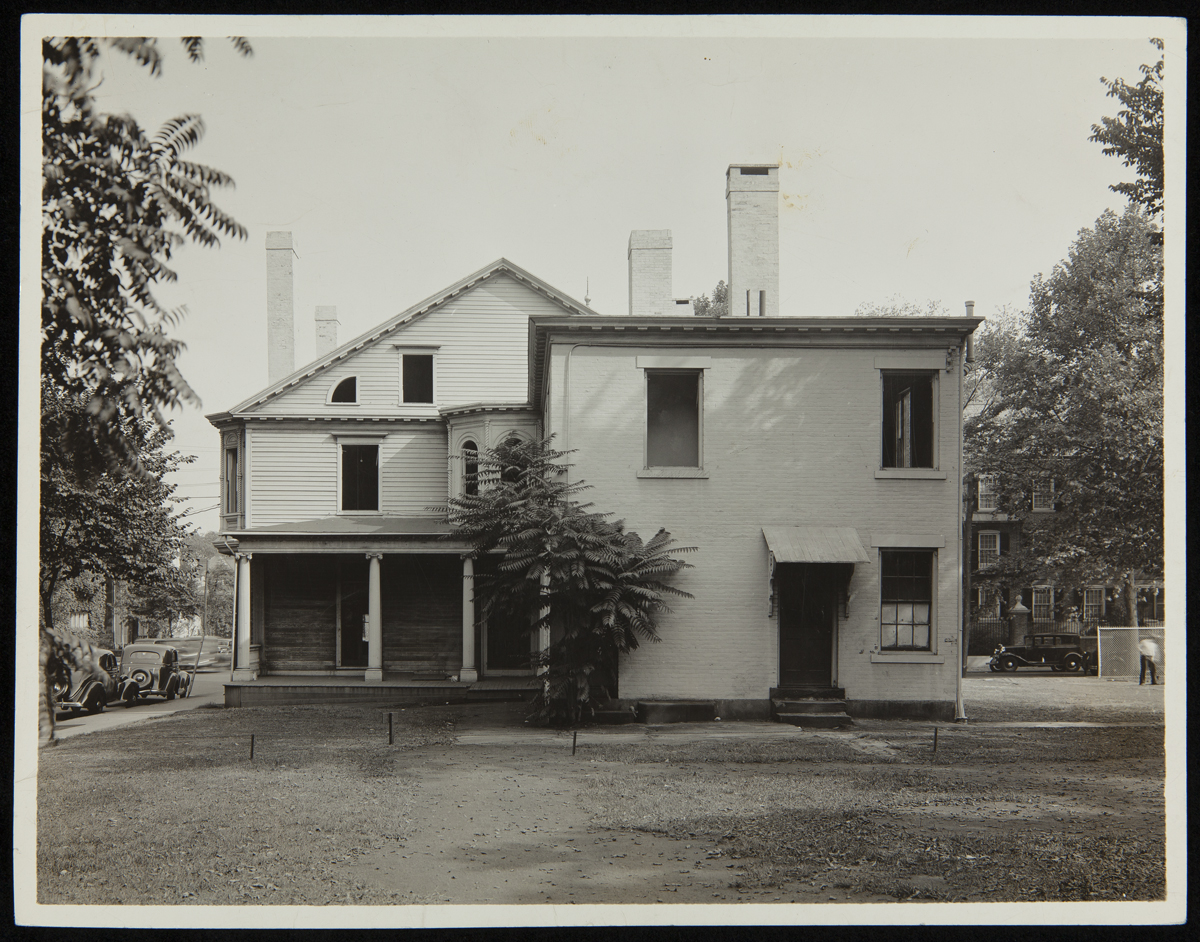 A view of the rear of the house in New Haven, circa 1936, showing the original configuration on level ground. The square Italianate addition and second story bay window were added in 1868. / THF236377

In 1936, Yale University decided to sell the Noah Webster Home to a demolition company for salvage, to make way for new construction. Edward Cutler recalled that the one thing Yale was interested in was the ellipse—for the art school, due to its extraordinary design and craftsmanship. Luckily, Henry Ford’s representatives were able to purchase the house from the demolition company before many of the decorative elements had been stripped off.

Since 1936, the front pediment of the Webster Home has undergone many repairs, siding replacement, and painting. It faces almost full west and takes a beating from the elements. Yet not until now has the ellipse been removed and examined more closely.

Recently, our carpentry team carefully removed the ellipse and took it back to their shop to undergo some repair work. The decision was made to not replace any of its elements, but rather to stabilize the original louvers and do some reinforcements to the center floret element. Further work was done to ensure that no water can get in or around any part of the ellipse. New siding was custom milled for the pediment, including areas where it joins the ellipse, and the molding that surrounds it was restored. Several coats of new paint will further protect this amazing and beautiful survivor. 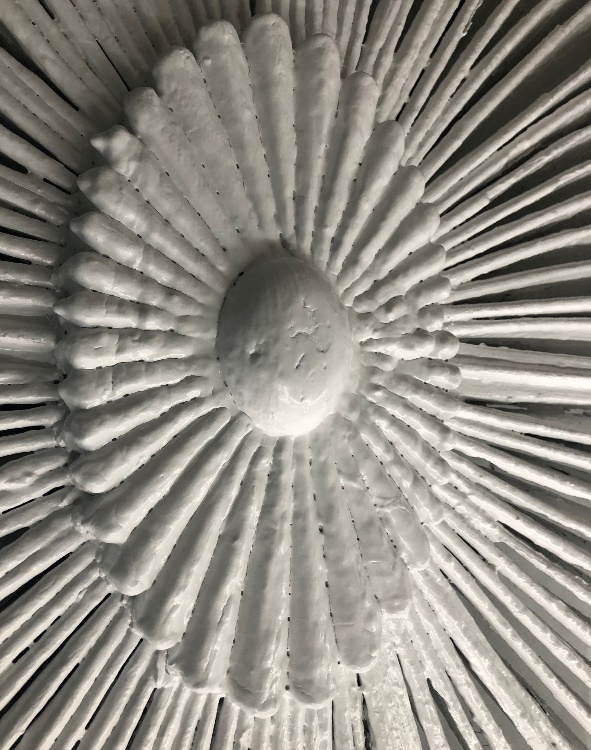 These images show the 199-year-old decorative ellipse from the front pediment of the Noah Webster Home. It underwent conservation efforts and received several coats of new paint in preparation for its return to its rightful location. / Photos by Jim Johnson 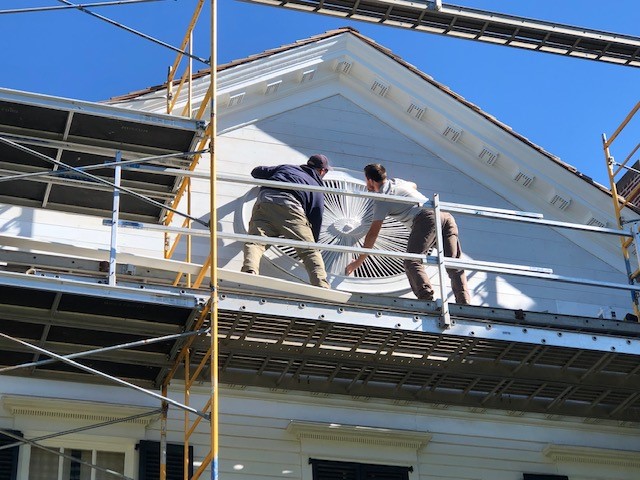 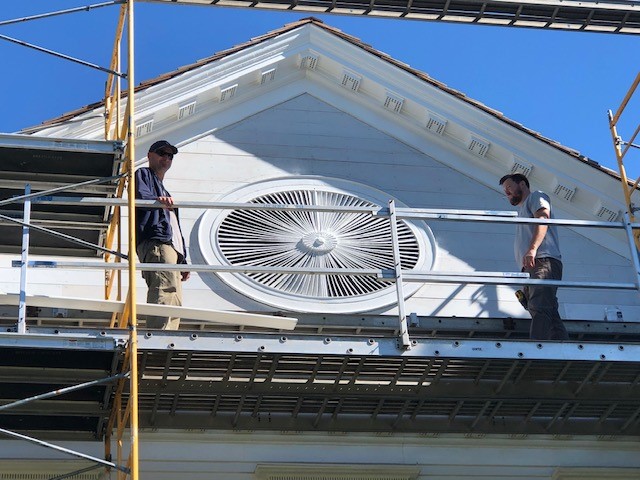 The three images above show the original ellipse being reinstalled in the pediment. / Photos by Jim Johnson

The renovation of the façade of the Noah Webster Home is now complete as the ellipse has returned to its place of honor, ready to withstand the elements for another 200 years. Kudos to the talented carpentry and painting staff of The Henry Ford! 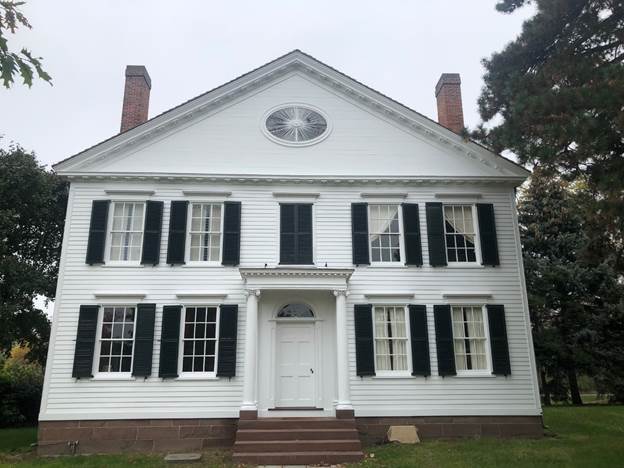 The completed renovation of the façade of the Noah Webster Home. / Photo by Jim Johnson

So, the next time you walk by the Noah Webster Home in Greenfield Village, slow down a bit and linger to allow time to take in the all the details that were intended to be seen—when the speed of life moved at a very different pace, two centuries ago.


Jim Johnson is Director of Greenfield Village & Curator of Historic Structures and Landscapes at The Henry Ford.