Our new limited-engagement exhibit, Collecting Mobility: New Objects, New Stories, opening to the public October 23, 2021, takes you behind the scenes at The Henry Ford to show you how we continue to grow our vast collection of more than 26 million artifacts. One key question the exhibit asks is why we collect the items we collect. To get more insight on the artifacts on exhibit and future trends that may impact our collecting, we reached out to several of our partners. In this post from that series, our friends at the University of Michigan, donors of the Navya Autonom® driverless shuttle bus in the exhibit, tackle questions about autonomous vehicles.

The Mcity shuttle project was less about autonomous vehicle (AV) technology than it was about human psychology. Why is it important to understand our current attitudes and comfort levels with self-driving vehicles?

Self-driving vehicles promise a better world for all of us by making roads safer, reducing fuel use, and providing more equitable, more accessible mobility options to more people. None of those benefits can be realized, however, if the public does not trust fully automated vehicles or is afraid to ride in them.

When the Mcity Driverless Shuttle launched in June 2018, consumer trust in automated vehicles was declining in the wake of two fatal crashes involving partially automated vehicles in Arizona and California. Mcity wanted to better understand how consumer attitudes about self-driving vehicles might be affected if they were able to experience the technology first-hand. 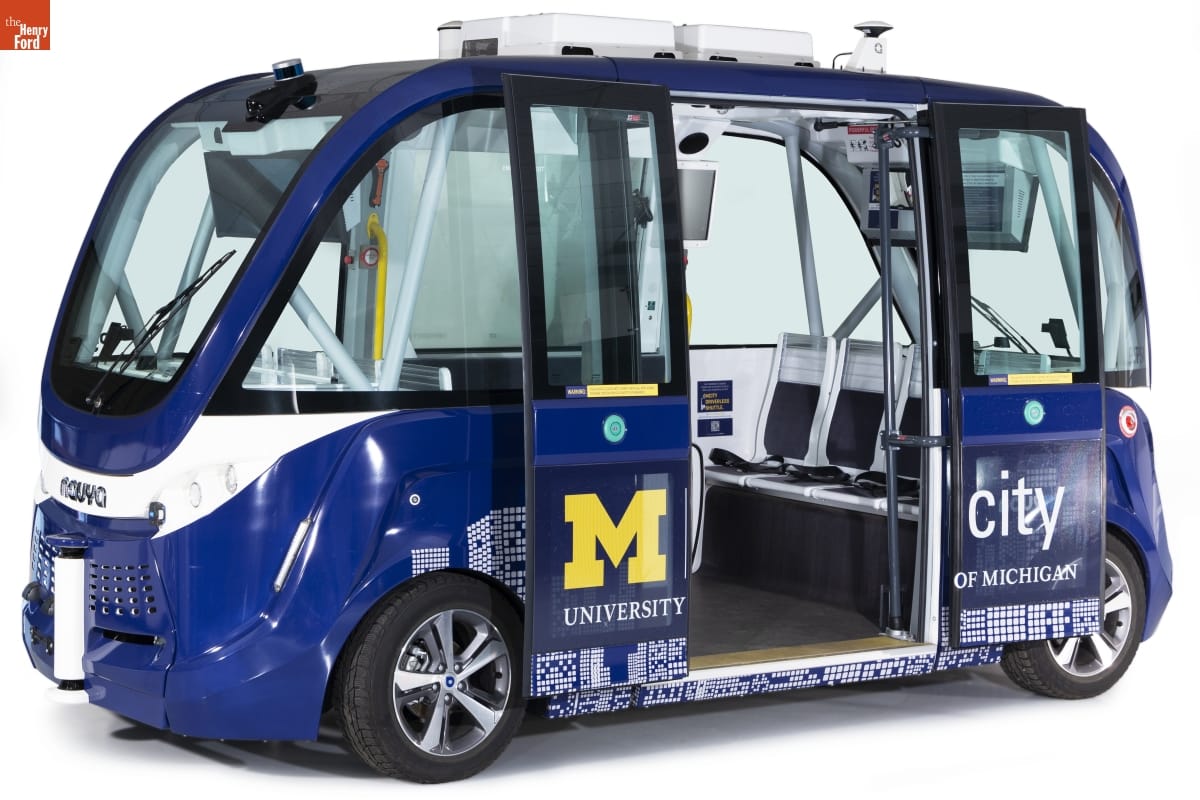 Navya Autonom® Driverless Shuttle Bus, used on the University of Michigan's North Campus and Mcity Test Facility, 2017, now in the collections of The Henry Ford and on exhibit in Collecting Mobility in Henry Ford Museum of American Innovation until January 2, 2022. / THF188013

Mcity worked with global market research firm J.D. Power to survey shuttle riders and non-riders—bicyclists, pedestrians, drivers of other vehicles—about their experience. By the time Mcity’s research wrapped up in December 2019, consumer sentiment nationally remained weak, according to separate surveys published in early 2020 by AAA and J.D. Power. But Mcity Driverless Shuttle survey results showed that 86 percent of riders trusted the technology after riding in the shuttle, as did 67 percent of nonriders surveyed.

Understanding the role of public trust and acceptance is essential to widespread adoption of new mobility technologies.

Self-driving cars may be the most disruptive mobility technology since the car itself. They will affect every aspect of our century-long relationship with the automobile. What can we do to ease the transition?

We must help consumers better understand the potential of this disruptive technology to improve the quality of their day-to-day life, as well as society as a whole. One way to do that is through exhibits like Collecting Mobility at The Henry Ford.

What we did not have at the dawn of the automotive age a century ago was the myriad ways to communicate that are at our fingertips today. On-demand multimedia content produced and shared by industry, government, academia, media, and other organizations teaches the public about self-driving technologies and their risks and benefits as they evolve, helping to smooth the transition to a new way of moving people and goods.


One way Mcity disseminated information about their driverless shuttle project was through videos like this one, which shows the shuttle on its route at the North Campus Research Complex on the University of Michigan campus in Ann Arbor in 2018. / Mcity YouTube channel

Much of the project focused on shuttle passengers, but you also invited feedback from people who shared the road with the shuttles—pedestrians, cyclists, other drivers. What reactions did you get from them?

A vast majority of riders, 86 percent, stated post-ride that they trusted the Mcity Driverless Shuttle, as did 67 percent of nonriders surveyed, including pedestrians, bicyclists, and other vehicle drivers. Riders’ and nonriders’ thoughts regarding personal self-driving vehicles were positively impacted by the shuttle, generating more interest in the technology as a result of riding or seeing it in operation.

Learn more about the survey results in a white paper published by Mcity, “Mcity Driverless Shuttle: What We Learned About Consumer Acceptance of Automated Vehicles.” 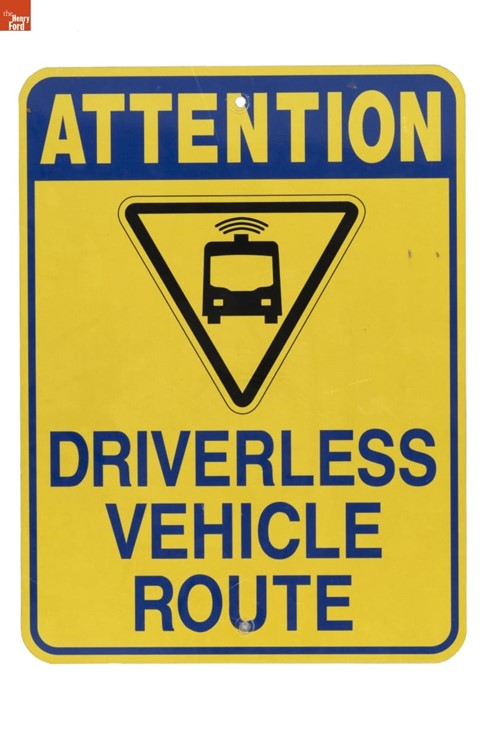 Trust in self-driving vehicles is required not just from passengers, but from those who share the streets with them. The Mcity driverless shuttle operated on two-way streets mixed with conventional traffic. This sign alerted road users to the shuttle’s presence. / THF185939

When the automobile arrived in the early 20th century, it brought with it many unintended consequences: traffic congestion, accidents, and air pollution, to name just a few. AVs may solve some of these problems, but what new issues might they bring?

Some potentially unintended consequences of AVs include:

Part of Mcity’s mission as a public-private partnership is to take on challenges that no single industry or organization can solve alone. We identify barriers to widespread adoption of AVs, as well as potentially negative impacts of the technology, and we fund academic research to explore possible solutions. 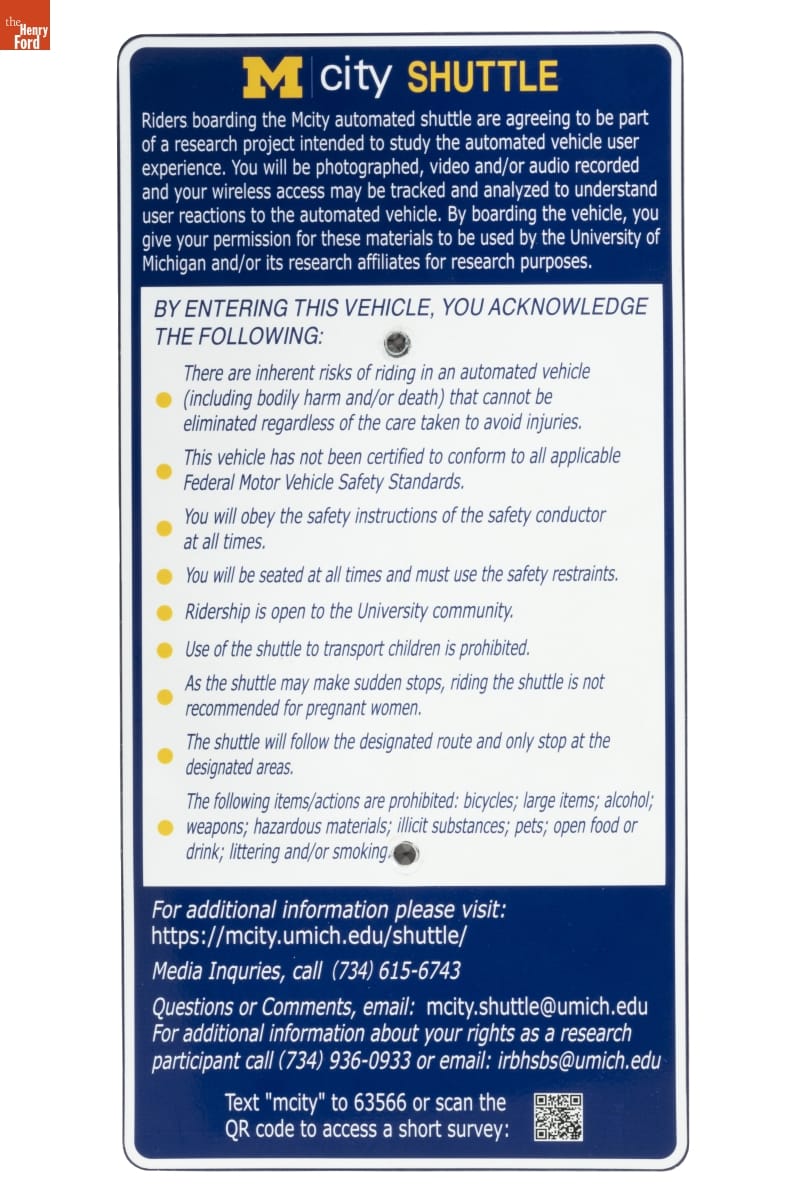 This list of rules displayed during the Mcity driverless shuttle project also identified some of the potential risks for those riding in 2018—but what might be the unexpected consequences of widespread AV adoption in the long term? / THF185936

What does it mean to have one of these shuttles in the collections of The Henry Ford? Will future visitors think of it as a pioneering vehicle like the 1896 Quadricycle?

We hope so! Having one of Mcity’s driverless shuttles at The Henry Ford in a sense gives credibility to the idea that we’ve entered a new automotive age. Does this represent the future of transportation, or is it an early experiment that will ultimately not succeed as mobility innovation moves in a different direction? History will be the ultimate judge, but like Edison's workshop, it's incredibly important to preserve and document this evolution.


Matt Anderson is Curator of Transportation at The Henry Ford. Greg McGuire is Associate Director, Mcity, at the University of Michigan. Mcity at the University of Michigan brings together industry, government, and academia in a public-private research partnership to tackle critical questions about the future of mobility and help realize the promise of new technologies to make transportation safer, greener, and more accessible to all. See Collecting Mobility for yourself in Henry Ford Museum of American Innovation from October 23, 2021, through January 2, 2022.