When you think of museums—particularly history museums—it seems to make sense that they are inevitably all about the past. From an artifact collecting standpoint, there is an element of truth to this—most anything a museum can collect already exists and is already sliding into the past. But, putting aside ideas about the swift passage of time, it is important to understand that many museums—including The Henry Ford—do engage in what is known as “contemporary collecting.”

Contemporary collecting seeks to document history as it is happening, and relates to significant current events, trends, or cultural moments. When this collecting is done in the heat of the moment, especially when the conditions being documented are ever-changing or incredibly brief, it is known as “rapid response” collecting. Rapid response collecting relies on a well-tuned sense of what events will have greater historical significance—even after they are over—and requires a particularly proactive approach to gathering information and objects. 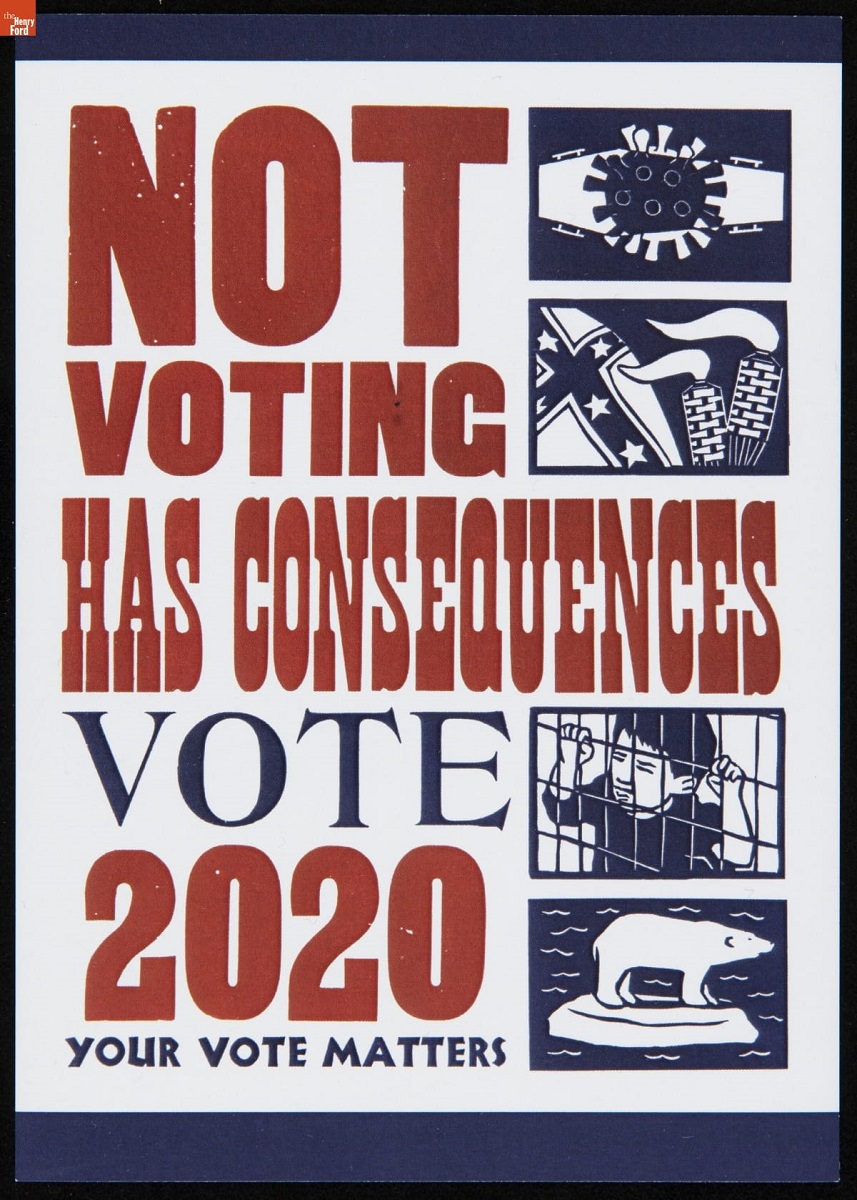 One example of contemporary collecting occurs every four years, when The Henry Ford collects material related to the presidential election cycle. This postcard, created by Sea Dog Press, is from our 2020 collecting initiative. More examples from that initiative can be found here. / THF622210

In early 2020, the world was overtaken by the COVID-19 virus. It soon became clear—as industries ground to a halt, scores of workers were sent home, and international travel all but ceased—that the pandemic would become a major moment in history. Upon this realization, the curatorial staff of The Henry Ford went to work, developing a rapid response plan to document the still-unfolding pandemic. When developing this plan, the curatorial staff was keen to ensure that these collecting efforts not only captured a vivid perspective on the pandemic but also built upon the uniqueness of our collections. They determined to focus on three broad themes: innovation on a nationally significant level, grassroots resourcefulness on the part of individuals, and ingenuity demonstrated by businesses and entrepreneurs. Within each of these categories, curators identified topics that had already begun to emerge, and noted potential objects or types of objects that could be acquired.

With the plan complete, it was presented to The Henry Ford’s Collections Committee—the chartered committee responsible for reviewing and approving all proposed additions to the collections of The Henry Ford. The majority of the committee’s business consists of taking a final vote as to whether or not an item should be accessioned—the term for officially adding an item to the collection. However, some acquisitions are discussed with the group before curators begin making final preparations to acquire them; this gives the committee an opportunity to weigh in on proposed acquisitions that may be more complex, or that would require a greater outlay of the institution’s time or resources. The committee also approves all collecting initiatives, as they typically involve special effort, or result in a larger number of acquisitions; having the committee’s endorsement ensures that the collecting can be adventurous and creative but within clear parameters. Once approved by the committee, the COVID-19 Collecting Initiative was put into place, and curators began gathering information and materials. 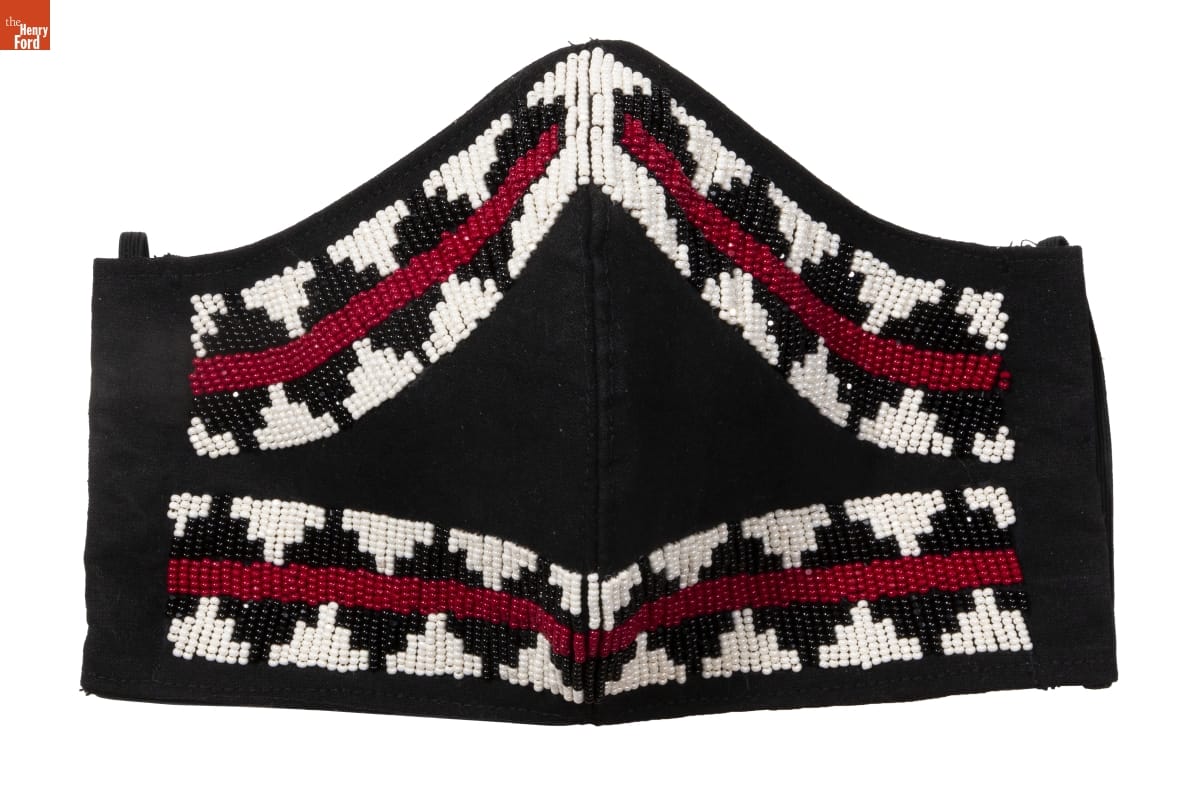 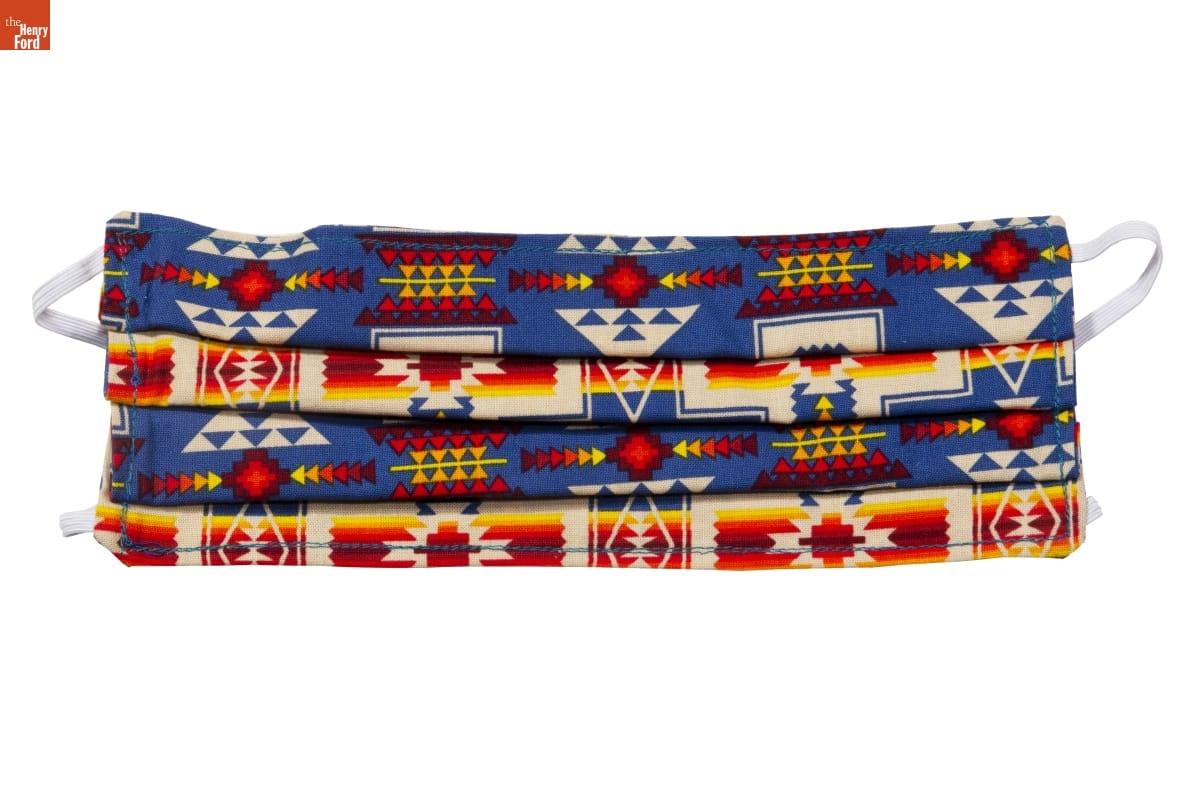 Our COVID-19 collecting initiative included outreach to people with items of interest, such as Brighid "Birdie" Pulskamp, a Diné craftswoman who created a beaded facemask featuring a traditional Navajo wedding basket design, as well as fabric masks that she sent to the Navajo Nation to help combat the spread of the virus on reservations. / THF186023, THF186021

While many acquisitions for the collection are actively sought out by our staff, others end up finding us. On September 9, 2020, Curator of Transportation Matt Anderson returned to Collections Committee with word that Ford Motor Company—with whom we have a long and fruitful relationship, particularly in regard to collecting—had reached out to him regarding a prototype COVID-19 testing van that they had developed. Ford Motor Company’s COVID-19 response—particularly their shift from manufacturing automobiles to producing equipment and supplies to aid in the fight against COVID-19—had already been a point of interest on our radar, and had been specifically identified in the collecting initiative.

After hearing the details of the acquisition, the Collections Committee gave Matt a “consensus to proceed” with the acquisition. Consensuses to proceed are given after an initial discussion of a potential acquisition, but before said acquisition is presented for final accessioning; they allow curators to proceed with making any necessary arrangements—like shipping—without overcommitting the institution, should the circumstances of an acquisition change. 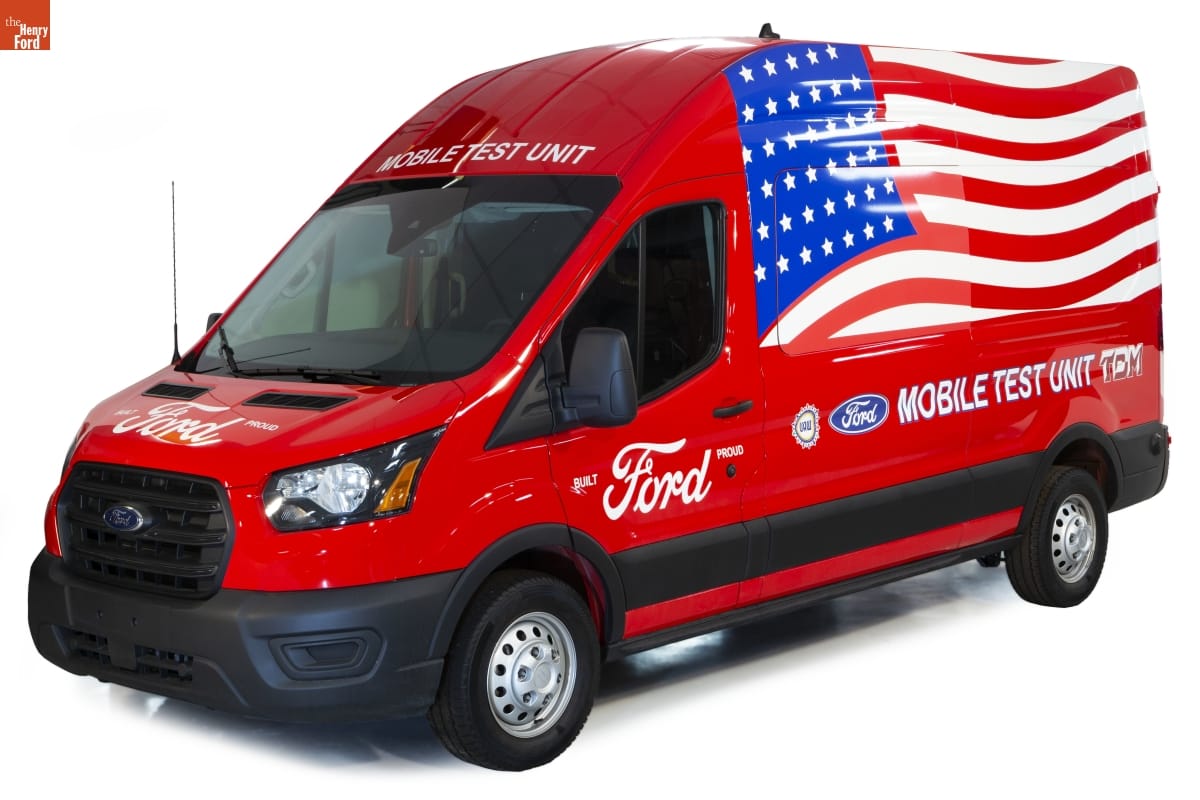 In working with Ford Motor Company to arrange the donation of the COVID-19 testing van, Matt had the opportunity to discuss other COVID-19–related material that Ford had produced. Of particular interest were the ventilators produced at Ford’s Rawsonville plant. Ford indicated that they would be willing to offer us not one but three of those ventilators: a standard one, one signed by the Rawsonville workers, and one signed by President Donald Trump during his visit to the plant. Would The Henry Ford be interested in all three?

In considering objects, The Henry Ford also considers the stories they represent, and these three ventilators were no different. While one alone would have served to document Ford’s manufacturing response, collecting all three would allow us to tell a more multi-layered story. The blank ventilator is just like all the others that rolled off Ford’s assembly line; the one signed by the Rawsonville employees documents and celebrates the people who made Ford’s manufacturing feat possible; and the one bearing President Trump’s signature captures his historic visit to the plant. While we are always cautious of over-duplication in our collection, in this instance, while the objects themselves were similar, the elements of the story were distinct, and all were important to document via our collection.

In addition to the COVID testing van and ventilators, Ford Motor Company also offered numerous pieces of PPE (personal protective equipment) they had prototyped or produced: ventilator connectors, masks, face shields, a gown, and a door pull. Matt accepted all of these items and began preparing them for presentation to Collections Committee, crafting a justification for their addition for the collection and writing a brief summary of their historical significance. On November 11, 2020, the Collections Committee gave their final seal of approval, voting to approve the addition of the van, ventilators, and assorted PPE to The Henry Ford’s collection. With that, the process of rapid collecting—at least in the case of the Ford COVID-19 response acquisitions—had come full circle.

As it turned out, though, just as the pandemic continued on, so too did our collecting opportunities. Ford Motor Company reached out again in the new year with more PPE—this time, though, created for a very unique event: the 2021 inauguration of President Joseph Biden and Vice President Kamala Harris in Washington, D.C. Ford had produced 15,000 single-use masks—in two designs, printed by Hatteras, Inc., in Plymouth, Michigan—to provide to those attending the ceremony. Matt Anderson gratefully accepted the 10 masks Ford offered us, noting their significance, as their production not only furthered Ford’s efforts to combat the spread of the virus, but also demonstrated Ford’s commitment to, in the words of the company’s president and CEO, Jim Farley, “a tradition so fundamental to our democracy.” Just like the testing van and other COVID-19 materials donated by Ford, these masks were presented to the Collections Committee for final approval, which was readily granted, and they became an official part of the collections of The Henry Ford. 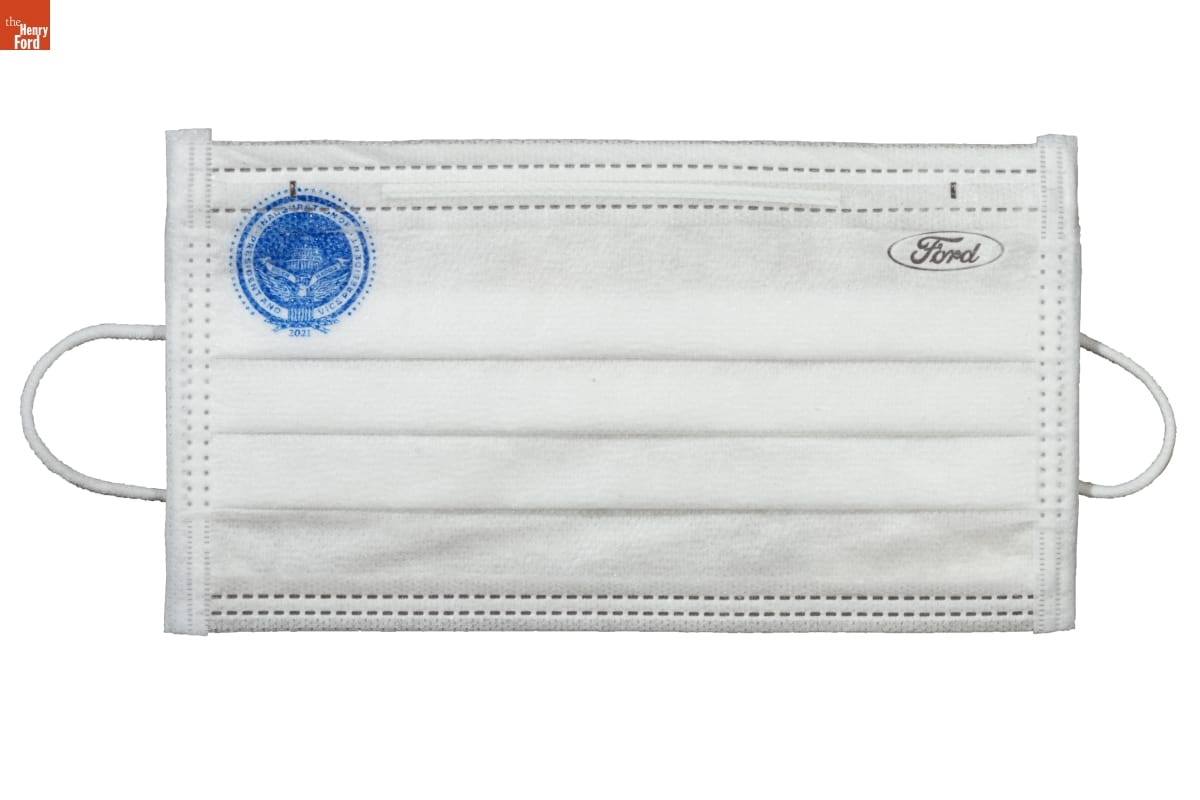 This face mask, produced for the 2021 inauguration, represents a unique overlap of two contemporary collecting initiatives undertaken by The Henry Ford: documenting the 2020–2021 presidential election cycle and documenting the COVID-19 pandemic. / THF186524

Thanks to the quick thinking and eager work of the curatorial department and the efficient processes of the Collections Committee, The Henry Ford was able to start documenting the COVID-19 pandemic as it was happening, and—with the help of a well-established relationship with Ford Motor Company—quickly tick an important item (and then some) off our collecting wish list. The thoughtful work of our staff and the relationships they build with outside organizations prove time and again to be key elements of building our collections, whether that be through collecting the past or the present.