On August 25, 2016, the National Park Service celebrated its 100th birthday, a celebration that encouraged us to seek connections within our collections. This blog post is the first part of four that will trace Edsel Ford’s relationship to the national parks.

The landscapes preserved by the national parks are a source of inspiration. Not only do they document the natural history of America, but they are also integral in telling the story of humanity on the continent. They remain powerful educational tools, allowing citizens to reflect on their collective history and where they want society to go in the future. Responsible for protecting these historical, cultural, and scenic landscapes, the National Park Service owes much of its existence to the forward-thinking industrialists who supported the early environmental movements in America.

The National Park Service's birth can largely be attributed to the efforts of millionaire industrialist Stephen Mather. Using his wealth and political connections, Mather secured the job of Assistant to the Secretary of the Interior and went to Washington. Once there, he worked to lobby, fundraise, and promote an agency that could manage America's national parks and monuments. Finding success, Mather became the first director of the newly-formed National Park Service in 1916. At times, he even funded the agency's administration and bought land out of his own pocket. Mather was not the only affluent American to donate his time and wealth to the National Park Service.

The Rockefellers and Mellons, two of America's wealthiest families in the early 20th century, also became champions of the national parks. Specifically during this time period, the biggest player in national park philanthropic efforts was John D. Rockefeller Jr., the only son of oil magnate John D. Rockefeller. Among his many other National Park Service donations, Rockefeller Jr. was noteworthy for purchasing the land or donating the money that helped create the national parks of Acadia, Great Smoky Mountains, and Shenandoah, including the expansion of Grand Teton and Yosemite National Parks. Rockefeller dominated this philanthropic scene and ultimately influenced the only son of another wealthy industrialist to join him in his cause.

Edsel Ford, born to Henry and Clara Ford in 1893, was not born into wealth, but the success of Ford Motor Company in the early years of the 20th century led his father to become one of the richest men in America. This set Edsel down a path to inherit the responsibility of that wealth, a position in which he would thrive. Remarking that wealth "must be put to work helping people to help themselves," Edsel understood the elite position he was in and acted with grace throughout his life. Often described as altruistic, sensible, reserved and most importantly modest, Edsel would go on to channel his family's money into countless philanthropies including medical research, scientific exploration, the creative arts and America's national parks. 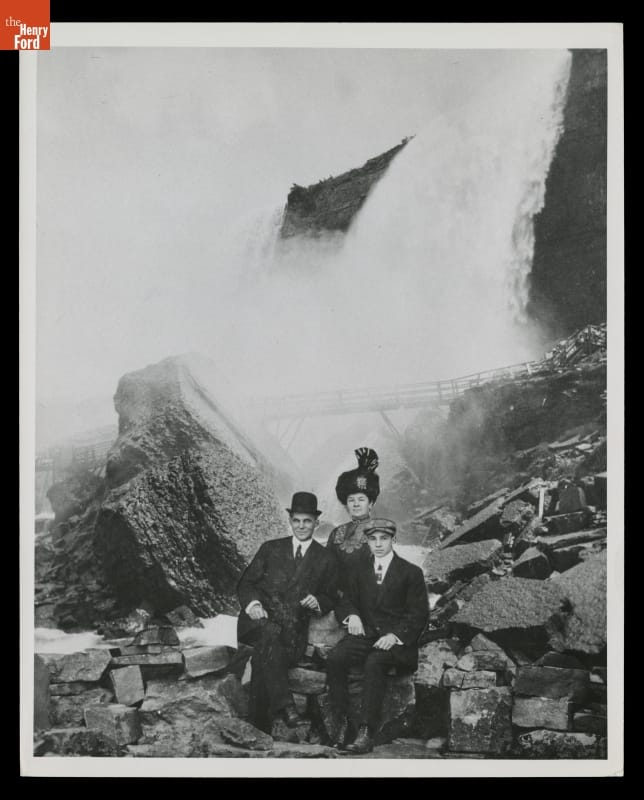 While this photograph was taken during the Fords' 1909 trip to Niagara Falls, they posed for the shot in a studio and were later edited into a photo of the falls. THF98007

At a young age, Edsel experienced some of the monuments and landscapes that make up our current national park system, creating memories that surely influenced him later in life. Family trips in 1907 and 1909 took Edsel to Niagara Falls, today a National Heritage Area in the park system. For the Alaska-Yukon-Pacific Exposition of 1909, Edsel accompanied his father by train to Denver and from there they took a scenic drive to Seattle where the exposition was being held. In 1914, he joined Thomas Edison, John Burroughs and his family as they spent time camping in the Florida Everglades. He also had the opportunity to visit the Grand Canyon at least four times in his life, with his first glimpse of the gorge occurring during a family trip to Southern California in 1906. 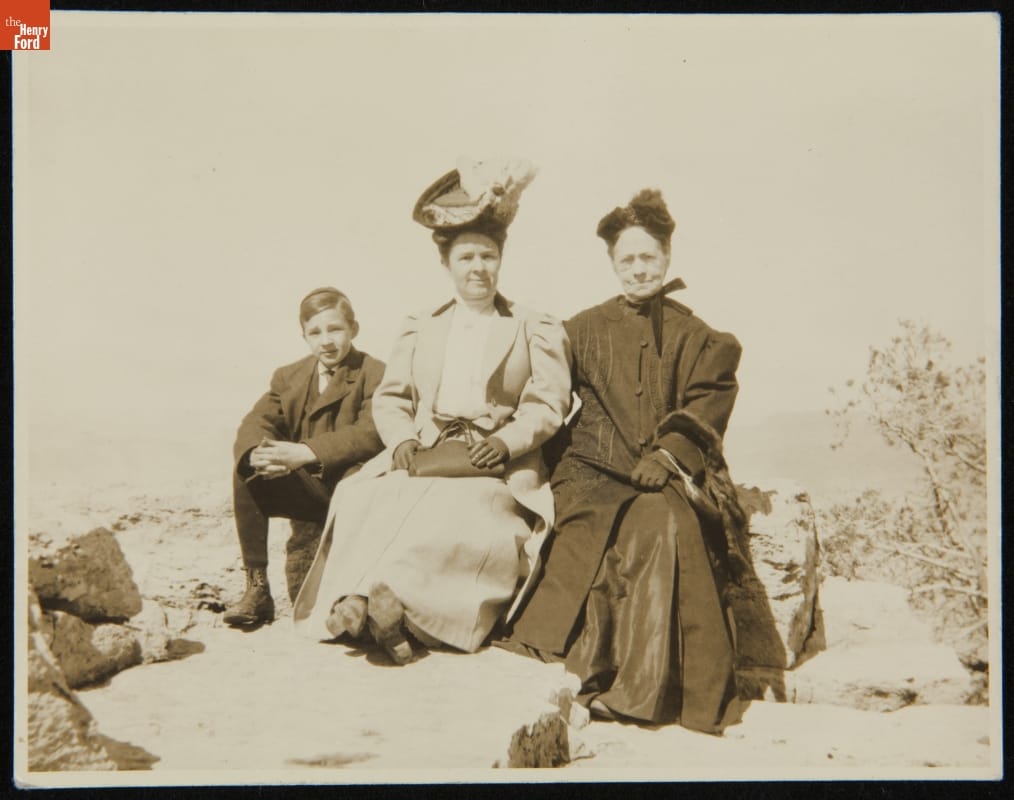 Visiting the Grand Canyon in 1906, Edsel sits here with his mother, Clara Ford, and Clara's mother, Martha Bryant. The canyon can be faintly seen in the background. THF255176

Edsel recorded a subsequent trip to the canyon in his diary during January of 1911. He wrote that he spent time hiking, visiting the Hopi House to watch Native American dances, and photographing the canyon. Photography would become one of many artistic hobbies Edsel pursued over the course of his life. Undoubtedly the beautiful vistas of the Grand Canyon provided a spark of creativity for the burgeoning young artist. The national parks and monuments had inspired creative sparks previously, allowing Edsel to illustrate this picture of the Washington Monument in 1909. These forays into the arts helped Edsel later become the creative force that took Ford Motor Company beyond the Model T and successfully into the industry of automobile design. 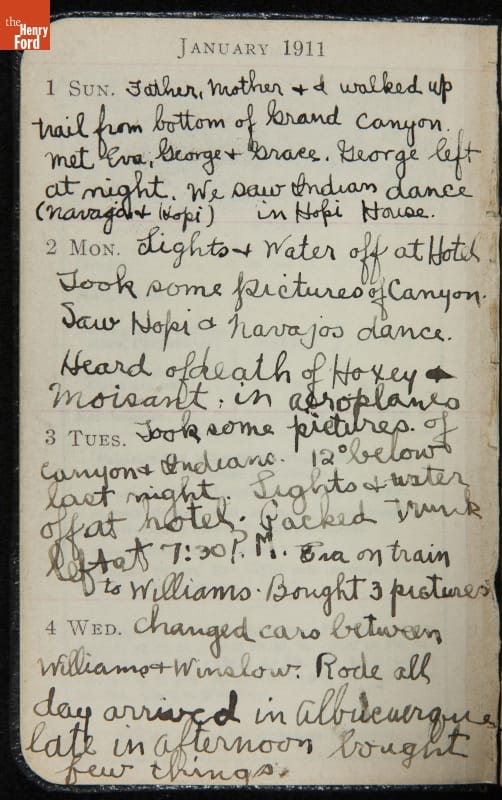 Edsel recorded his second Grand Canyon trip in his diary. Interestingly, Edsel also mentions he has heard of the deaths of Arch Hoxsey and John B. Moisant, two record-breaking pilots who died while performing separate air stunts on New Year's Eve of 1910. THF255172

Before Edsel made his dreams of car design a reality, Ford Motor Company had played a role in helping to improve accessibility to the landscapes of the national parks by making the automobile, specifically the Model T, affordable to the masses. In 1915, at age 21, Edsel took off in a Model T on a cross-country road trip with six of his friends. Departing from Detroit and heading to San Francisco, the trip allowed Edsel to again witness the scenic changes in the countryside as he traveled across the continent, something he had experienced on numerous family trips before. This time though, he was in charge of the places he explored. Making various stops during his expedition, Edsel visited the Rocky Mountains of Colorado, the desert of New Mexico and the Grand Canyon for a third time. 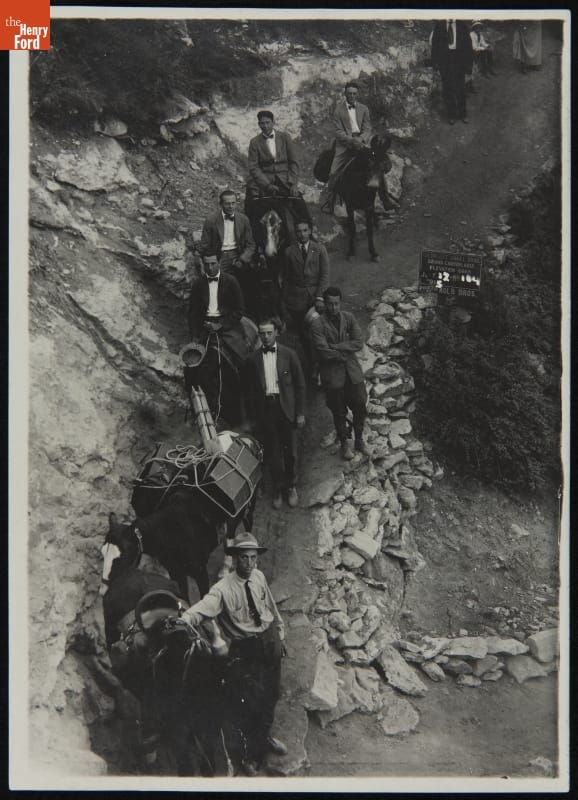 Edsel Ford and friends hike down Bright Angel Trail while visiting the Grand Canyon during their 1915 cross-country road trip. THF243915

The Grand Canyon must have left quite the impression on Edsel because, in November of 1916, he brought his new wife Eleanor Clay there on the way to their honeymoon in Hawaii. He wrote his parents from the El Tovar Hotel saying "We are surely having a great time. Walking and breathing this great air." They had spent the previous day visiting Grandview Point, a spot that continues to provide park goers with breathtaking views of the canyon. Edsel's new wife Eleanor would play an important role in his future national park endeavors. She exposed him to the rugged shores and natural beauty of the Maine coast -- a place where Edsel would cross paths with John D. Rockefeller Jr., establishing a friendship that would last a lifetime. 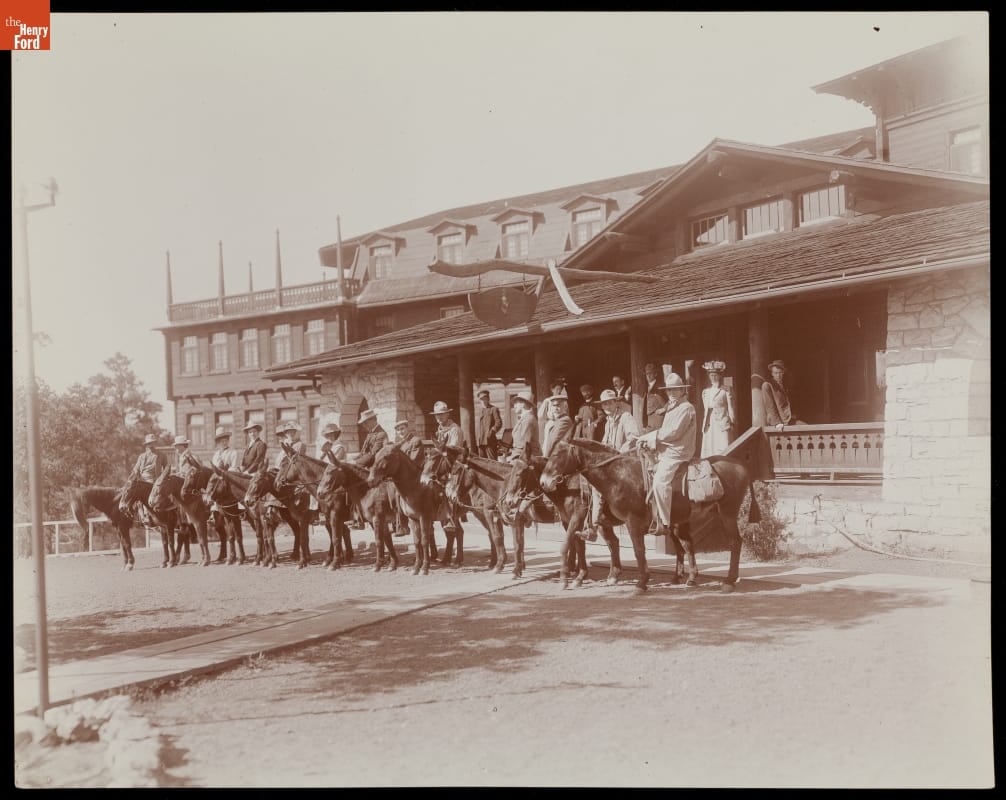 Operated by the Fred Harvey Company, which owned a chain of railroad restaurants and hotels, El Tovar Hotel was opened in 1905 through a partnership with the Santa Fe Railway. THF255180