How Do You Move a Photo Studio?

That is a very good question! While I don’t recommend moving from a larger space to a smaller one unless you have to (which we did), with time and effort, lots of help, and boxes, it can be done. Being photographers, it’s in our nature to document—well, everything—so come along on a Photo Studio–moving journey with me.

For almost 50 years, The Henry Ford’s Photo Studio has been located at the back of Henry Ford Museum of American Innovation—you may have walked past our windowed French doors on your way from Driven to Win: Racing in America towards the Highland Park engine. The Photo Studio, along with photographer Rudy Ruzicska and I, even made an appearance in Season Two of The Henry Ford’s Innovation Nation.


Get a behind-the-scenes glimpse at our former Photo Studio in Henry Ford Museum in this clip from The Henry Ford’s Innovation Nation. / YouTube

This Photo Studio saw many artifacts come through its doors. Below is just a small look at the variety of things we’ve photographed in the museum Photo Studio over the last few years (and a few of the faces behind the cameras). 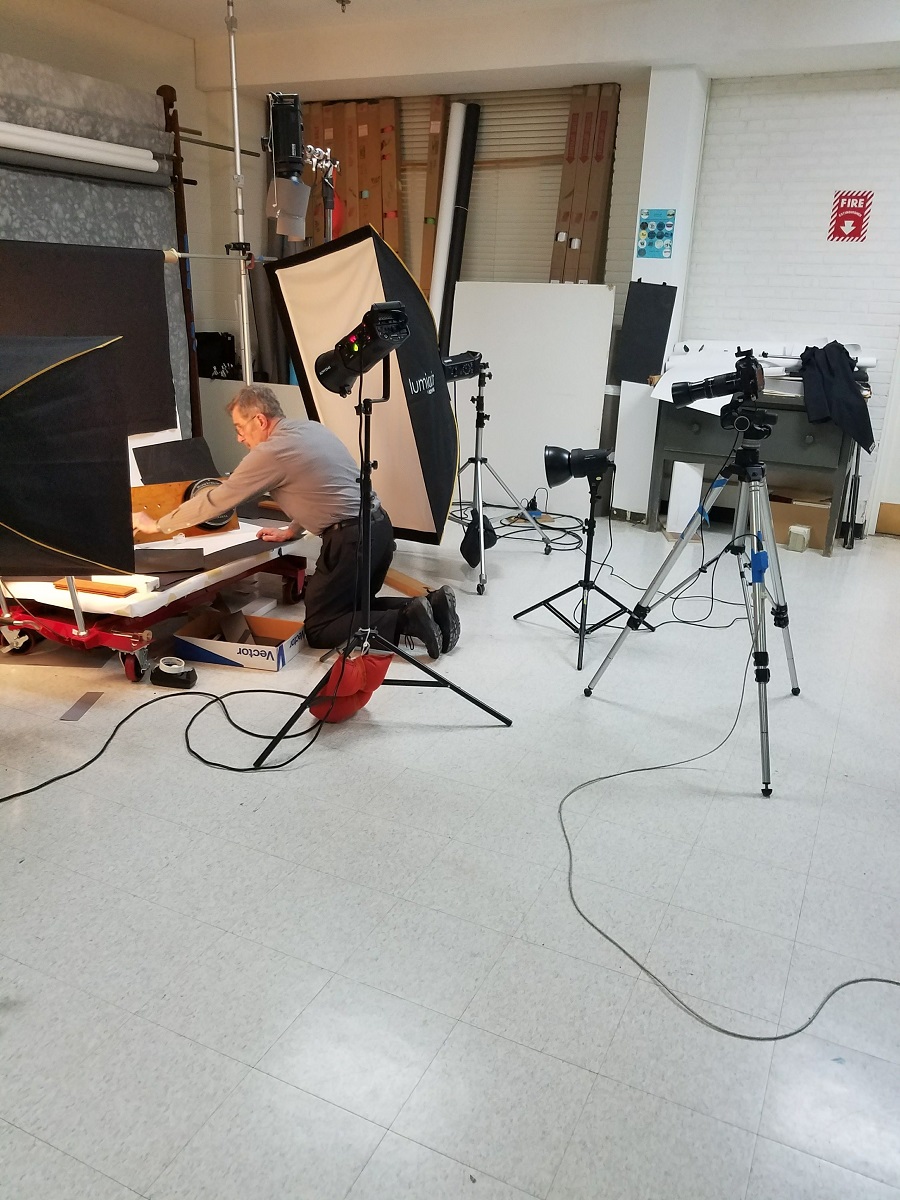 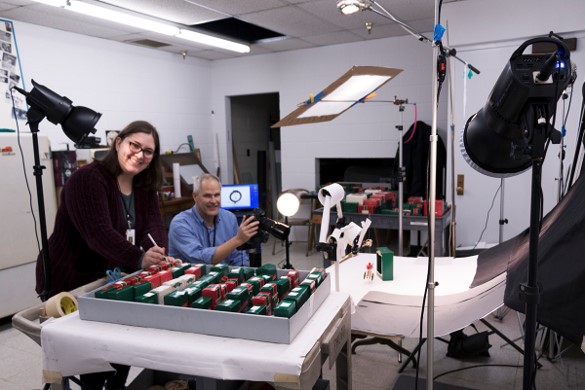 Contractors Todd Seroka and Natalie Diehl photographing Hallmark ornaments in the back room in the former Photo Studio. / Photograph by Jillian Ferraiuolo 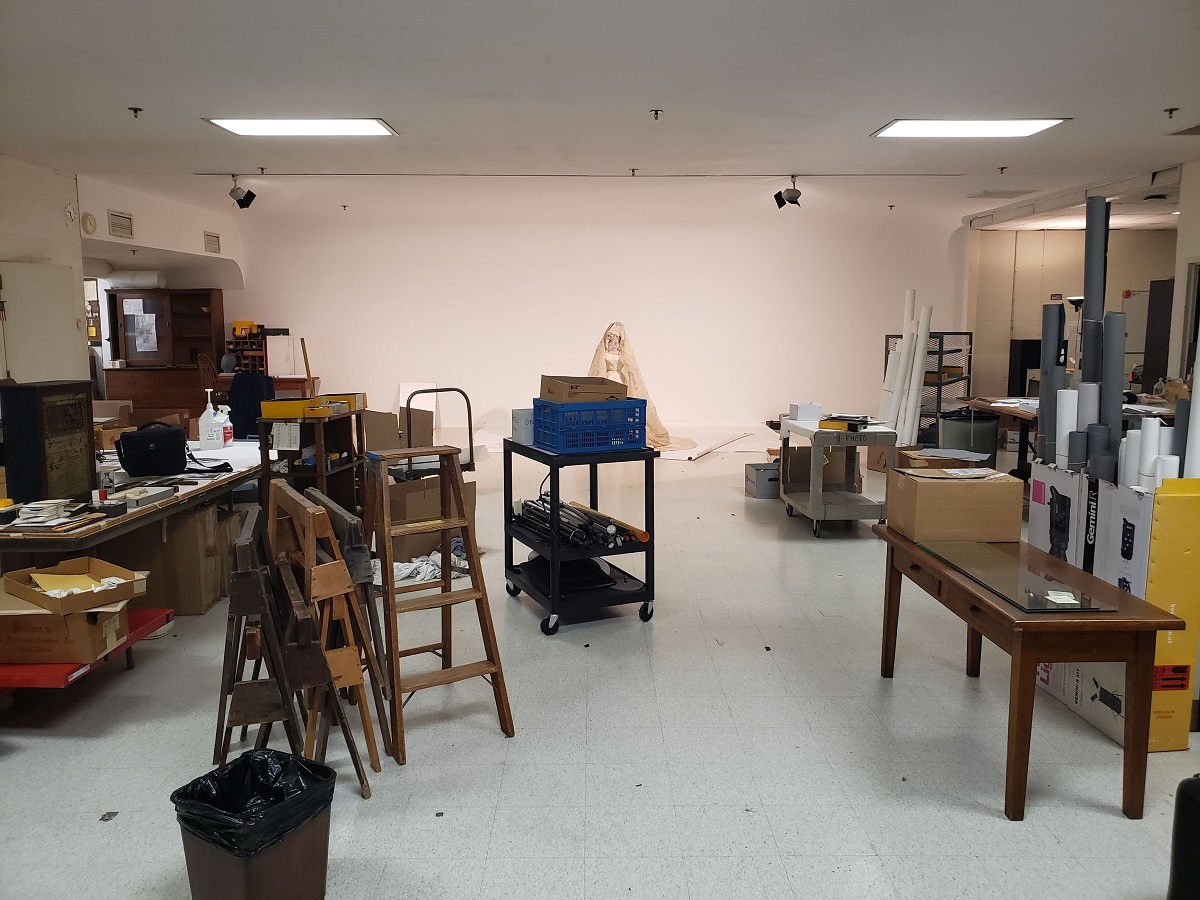 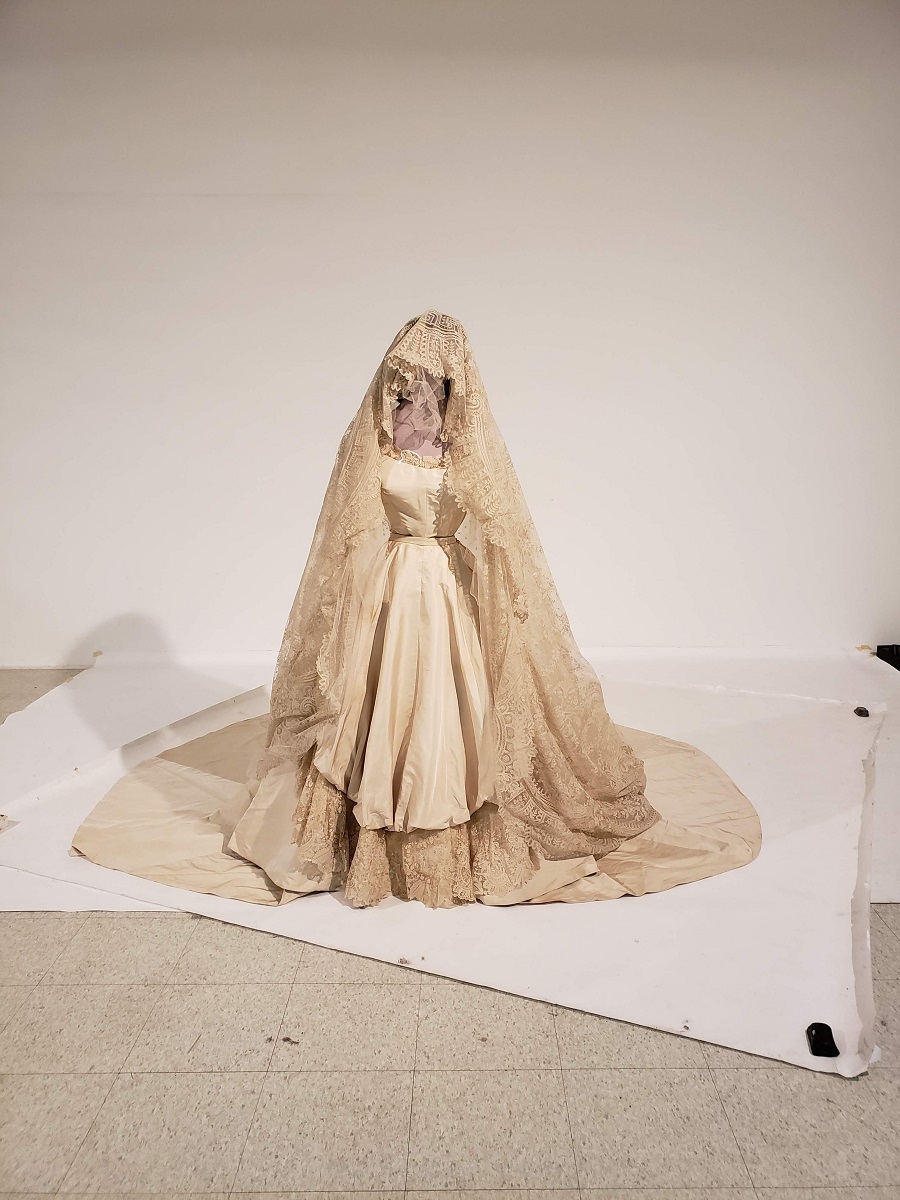 The final object we photographed in the old studio: a wedding dress worn by Elizabeth Chambers Firestone in 1954. / Photos by Jillian Ferraiuolo

However, institutional needs change. Last year, in order to get ready for some exciting new exhibit spaces in the back of the museum (here’s a hint about one of them), we needed to move.

Our new Photo Studio home is over in the Main Storage Building (MSB). This building currently houses tens of thousands of artifacts that aren’t currently on exhibit in the museum or in Greenfield Village. The fact that we are surrounded by artifacts makes it very convenient when we must take new photos of them—what used to be in a different building is now only a short walk away.

Before sharing more about the move itself, I have to note that we could not have made this happen without the assistance of colleagues on our Exhibits, Collections Management, Conservation, Shipping and Receiving, and Facilities teams. They all helped us greatly, whether in acquiring boxes, loaning carts, driving and loading trucks with equipment, or simply helping us move carts of stuff from building to building. We couldn’t have gotten it done without them! 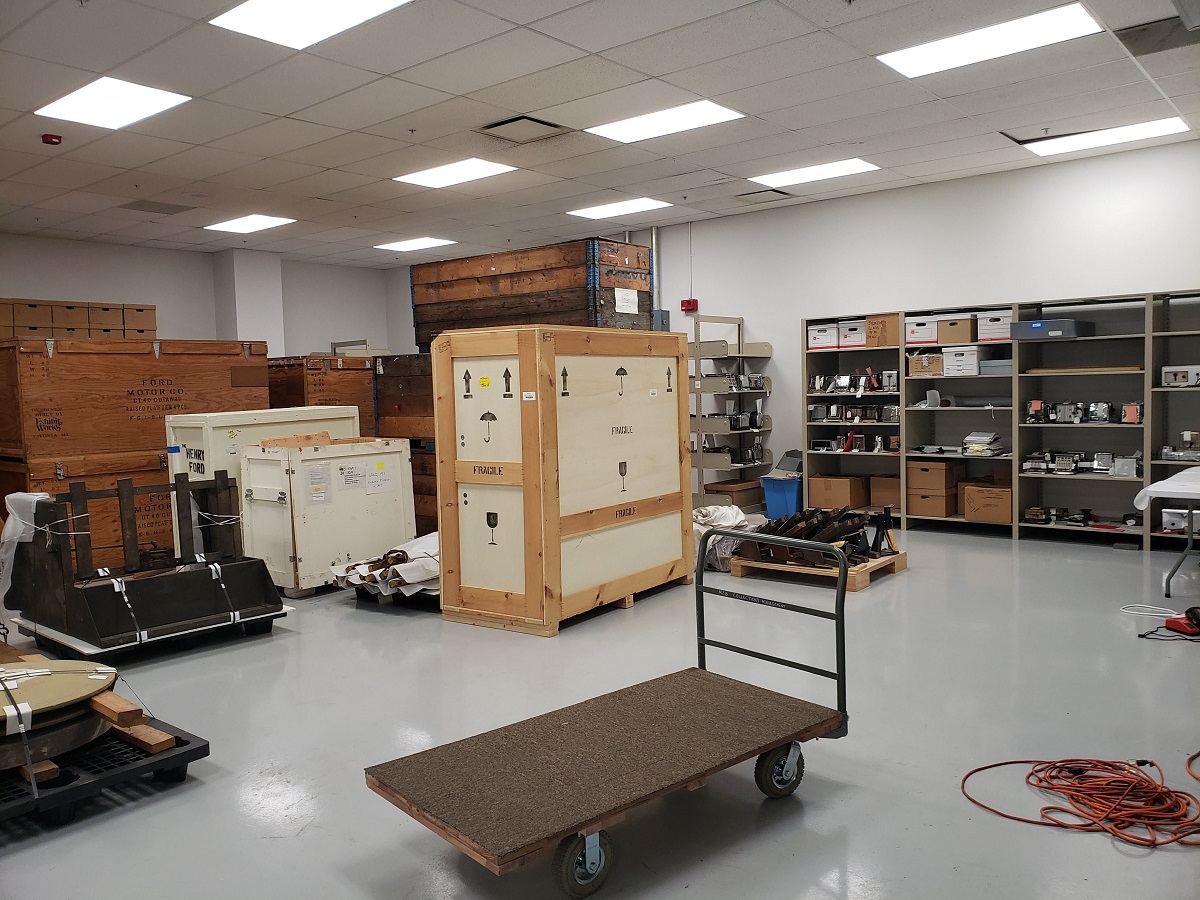 This is what the space looked like in MSB before it was converted into our new Photo Studio. As you can see, there were plenty of artifacts that our talented Collections Management crew had to move to elsewhere to make space for our new space. / Photo by Jillian Ferraiuolo

Our first task was figuring out what things we absolutely needed to take with us, and which would be the most difficult to move. You never really realize how many lights you have until you have to pack them all up and move them! We also had some trickier equipment that required a little bit of creativity to move—for instance, our eight-feet tall, top-heavy, weighted camera stand; backdrops; and other stands as tall as fifteen feet, to name a few. 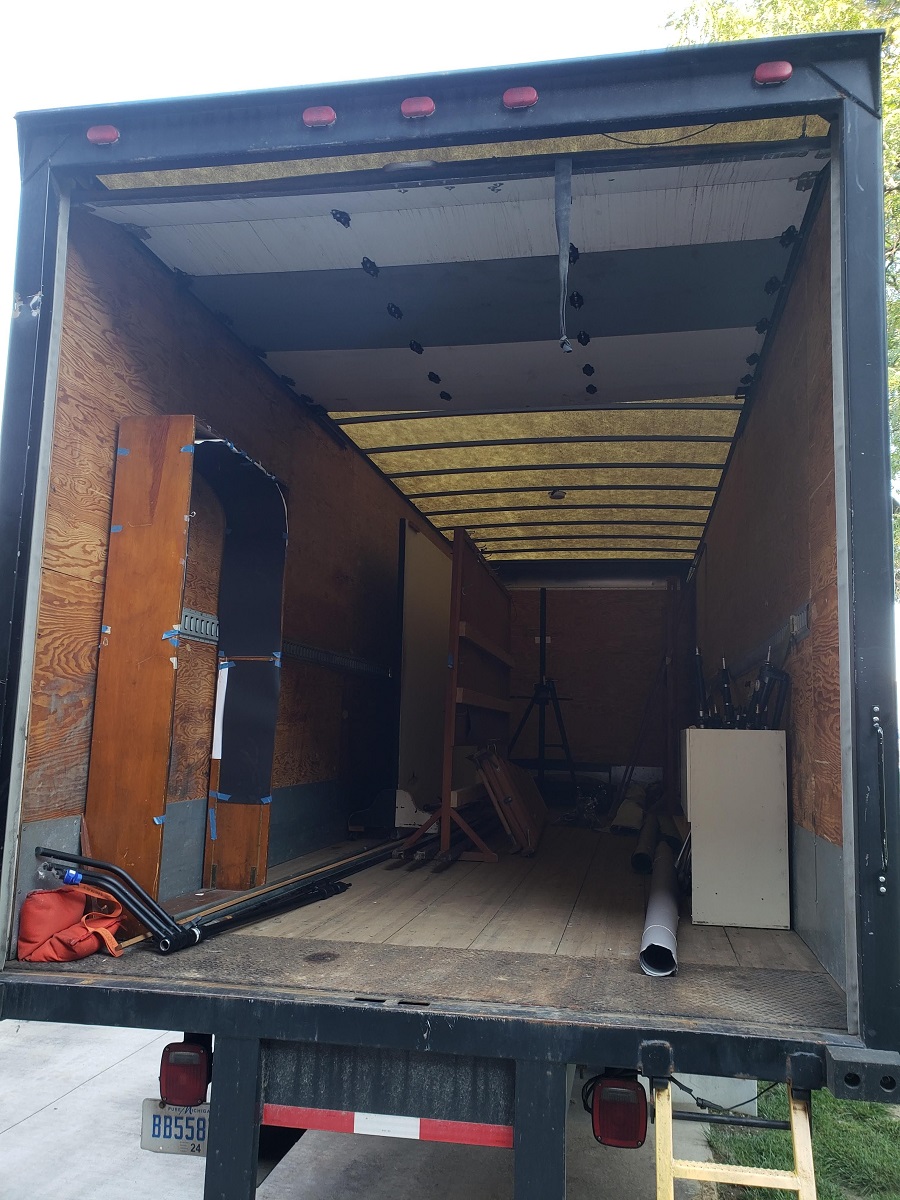 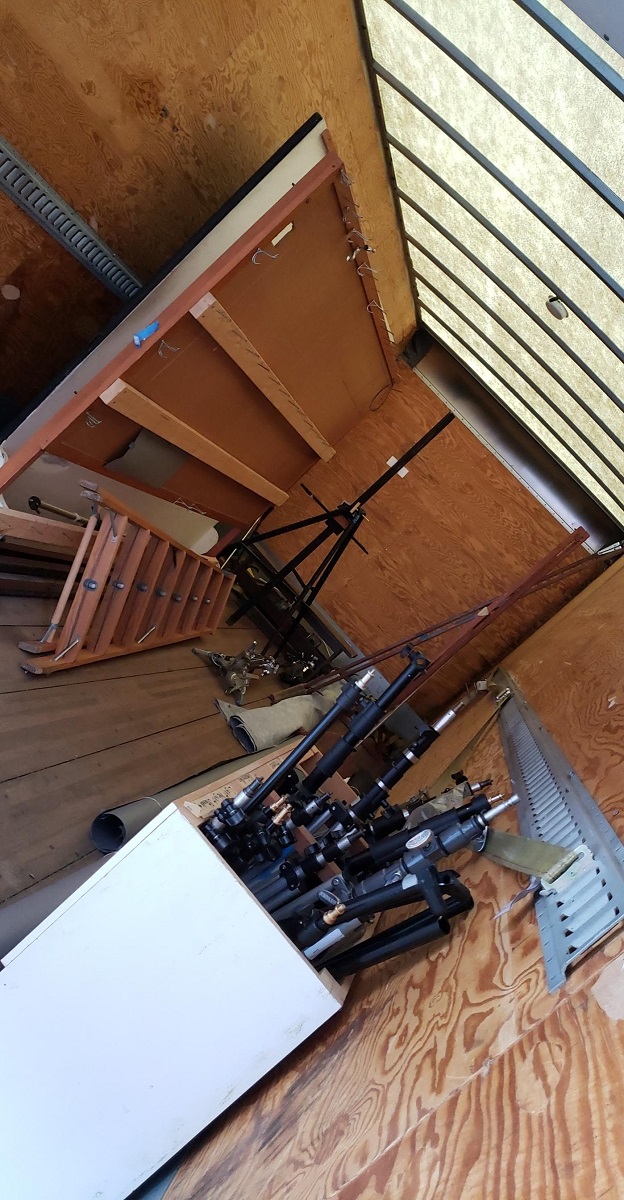 Box truck loaded up (with the generous help of our Exhibits team) with our first batch of equipment. / Photos by Jillian Ferraiuolo

Once we figured out what we did need, we then had to figure out what we didn’t need. After being stationed for almost 50 years in the same location (a period that also saw the transition from film to digital photography), we had a lot of outdated, unused, and unneeded equipment, as well as simply too much stuff to take over to a newer but smaller space. 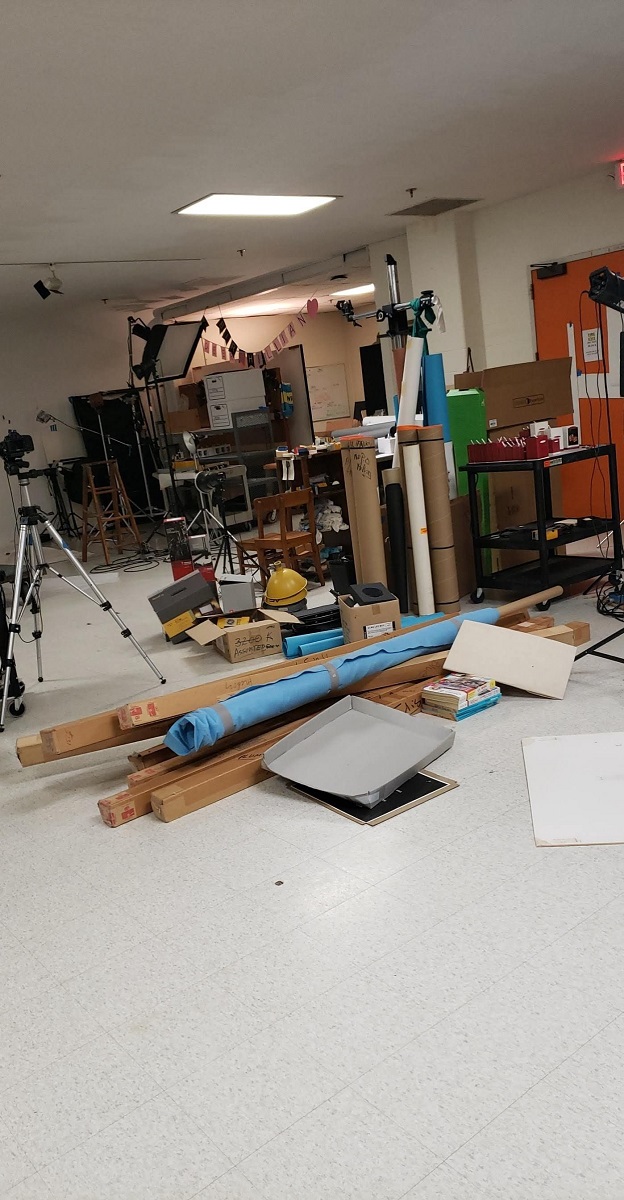 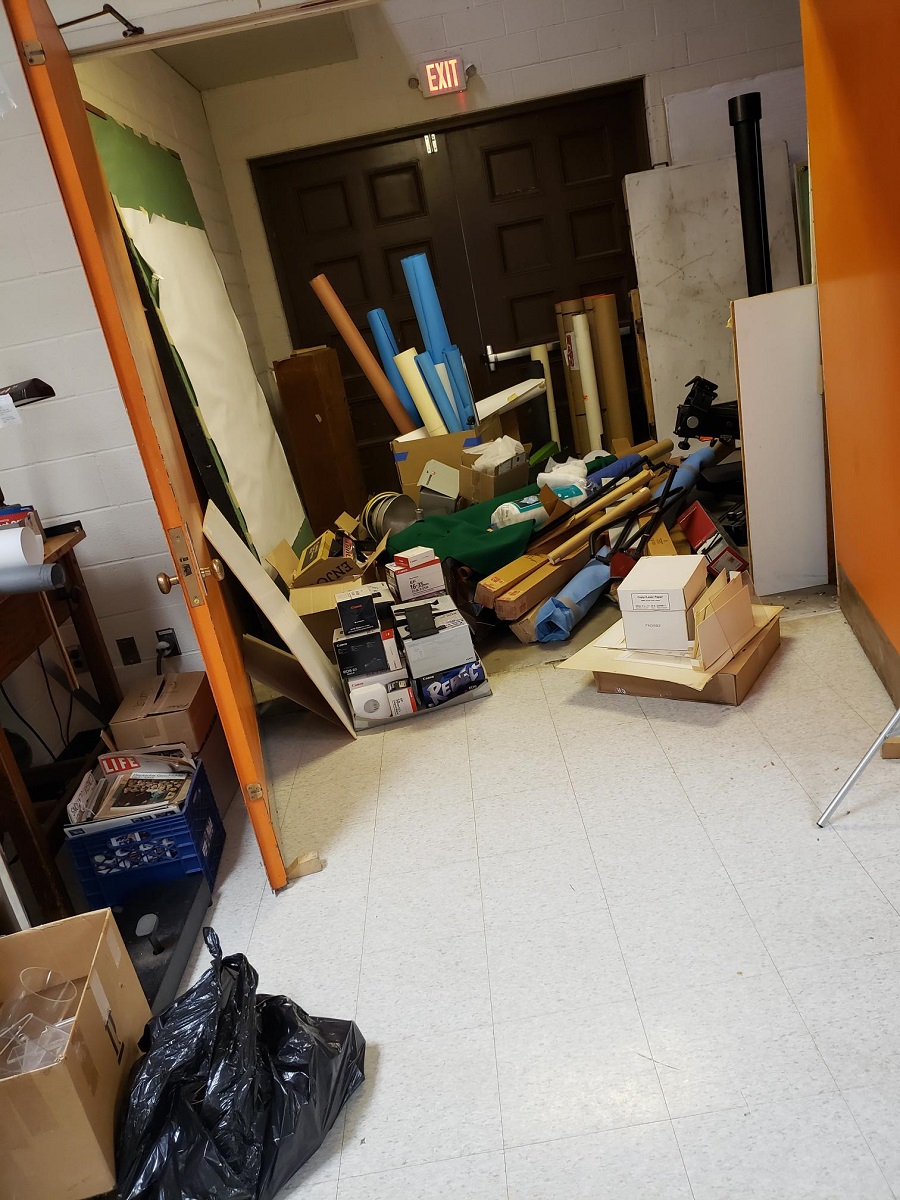 A couple of images of the large amounts of equipment and supplies we ended up letting go as we started the process of packing up and boxing everything else. / Photos by Jillian Ferraiuolo

After that, it was time to start moving things into the new space! Our move was only one of many projects going on around campus, and we had to be mindful of construction and painting that was happening in and around the new Photo Studio space during our move, but piece by piece and day by day, it started to come together. 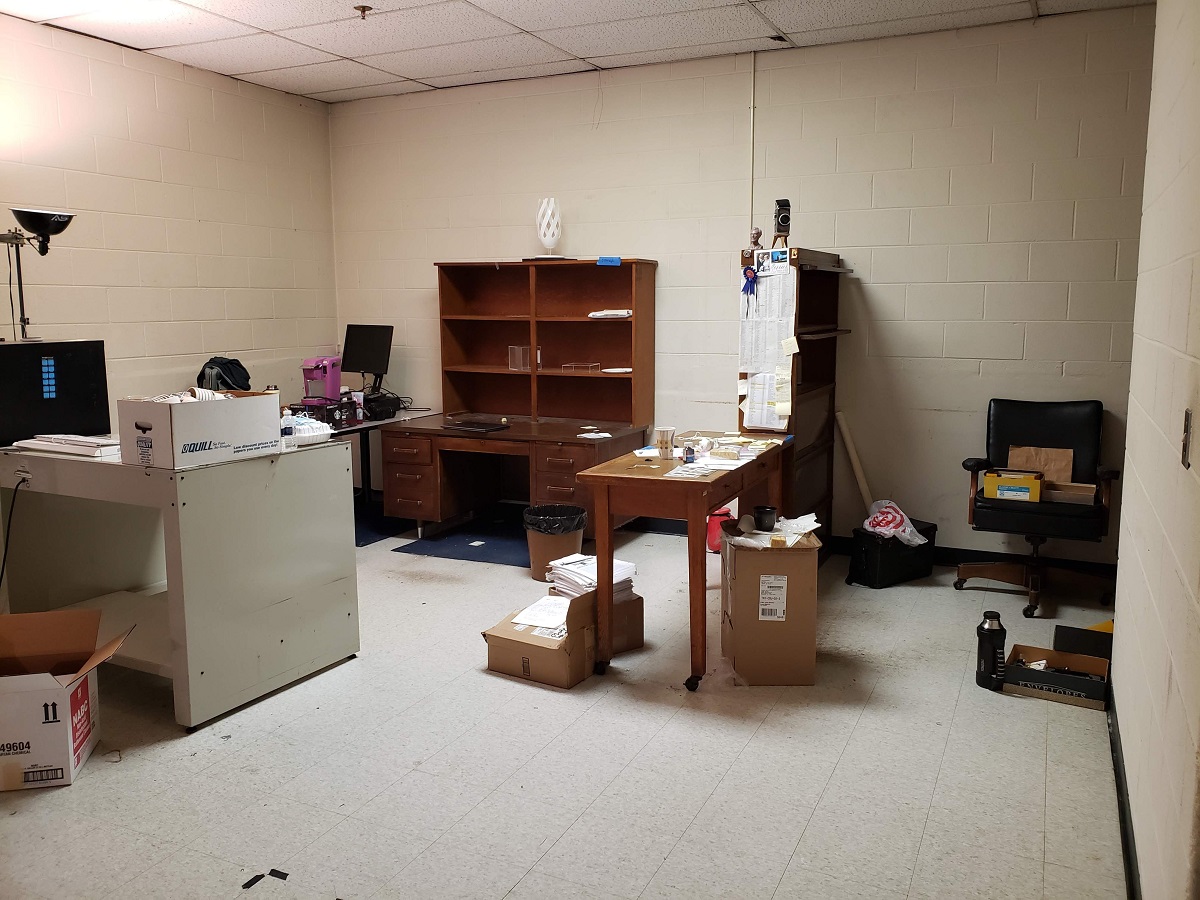 Our old (quite empty) office in the museum’s former Photo Studio…. / Photo by Jillian Ferraiuolo 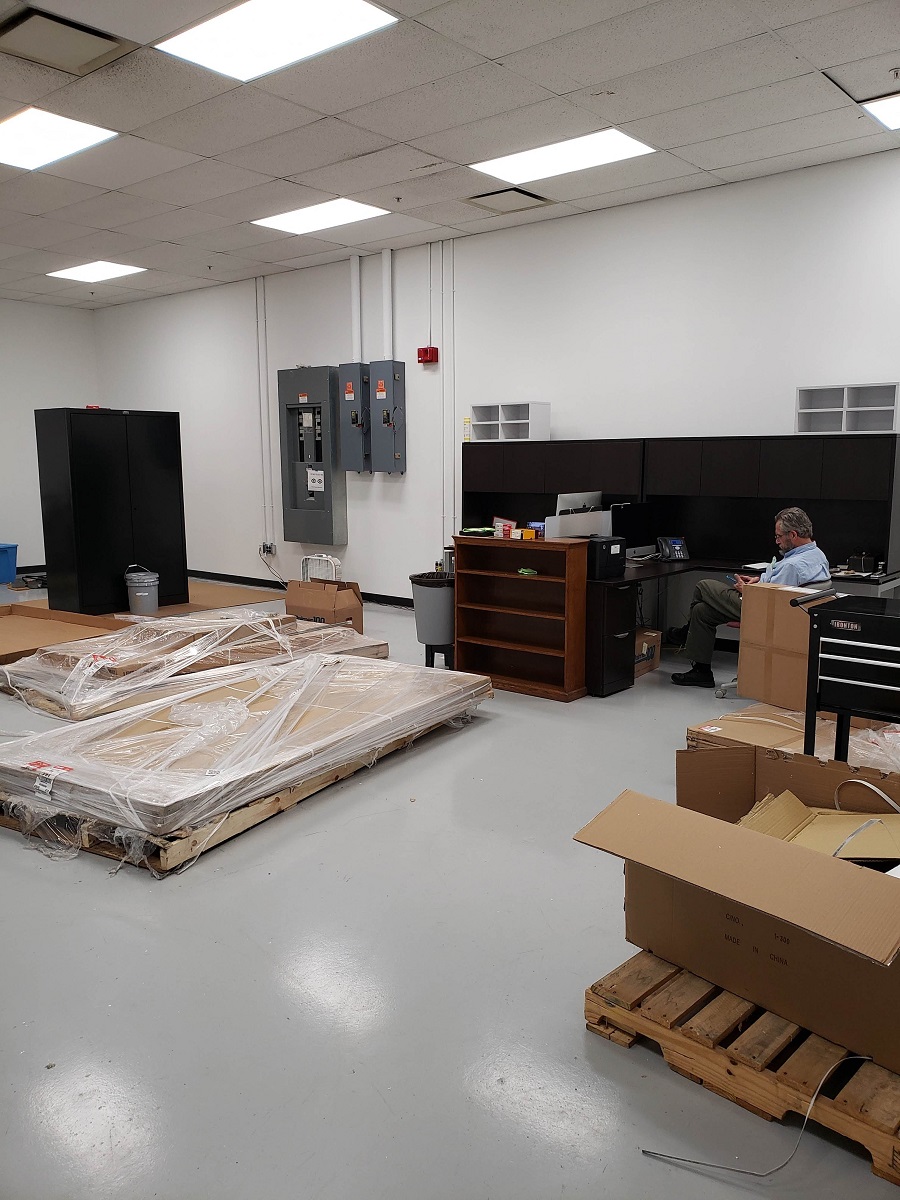 …versus our new (pre-unpacking) office in the MSB Photo Studio! / Photo by Jillian Ferraiuolo 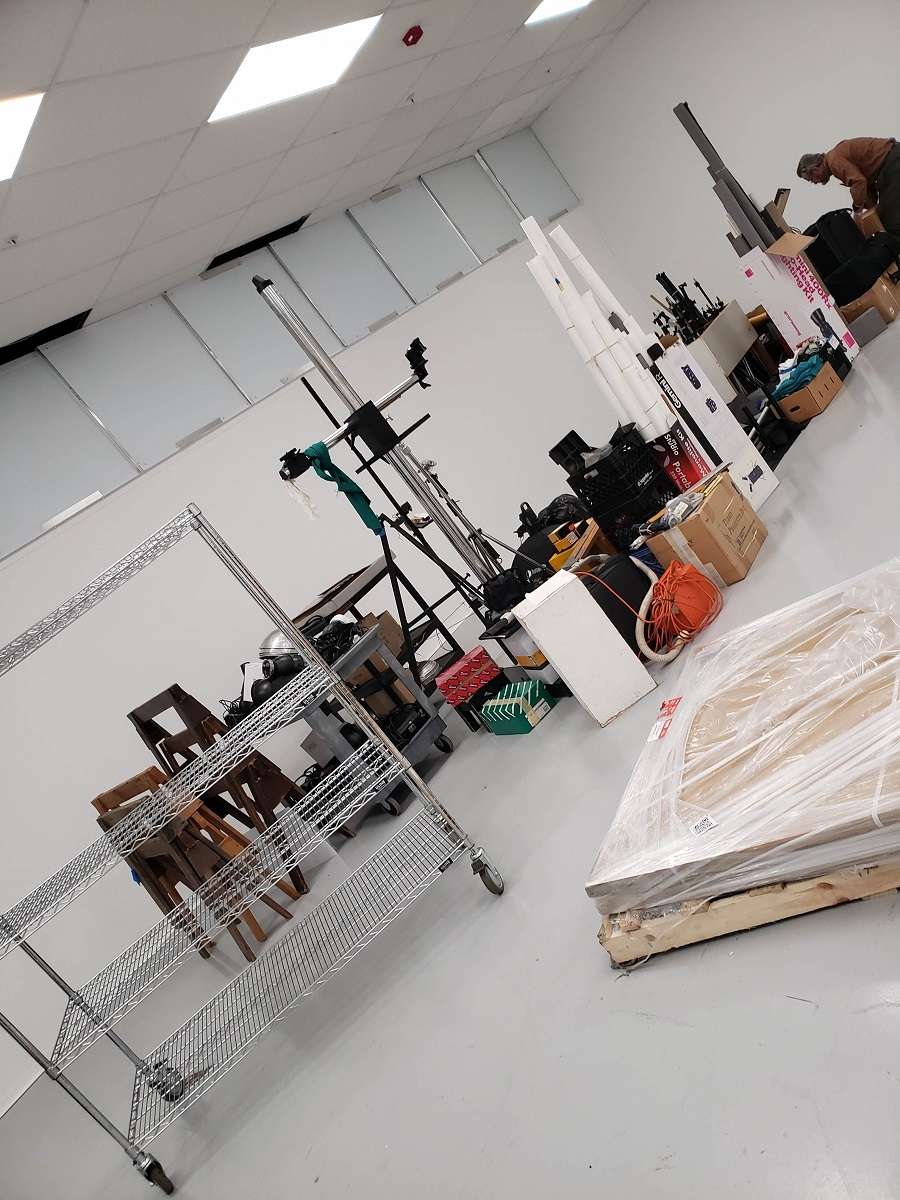 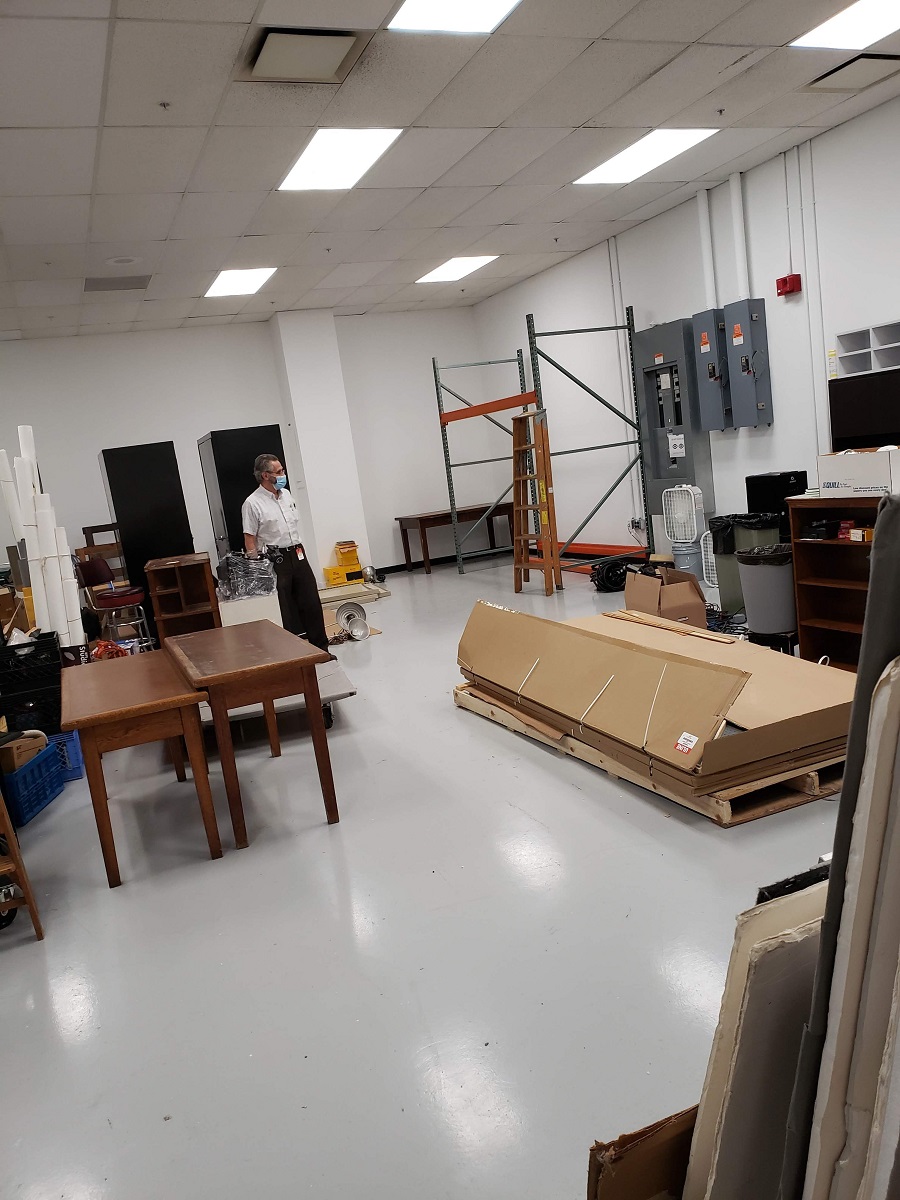 Two of the first images as we started to unload and organize our equipment in the new studio. / Photos by Jillian Ferraiuolo

Not long after this, the moving truck came our way, and we were officially moved out of the old Photo Studio in the museum. 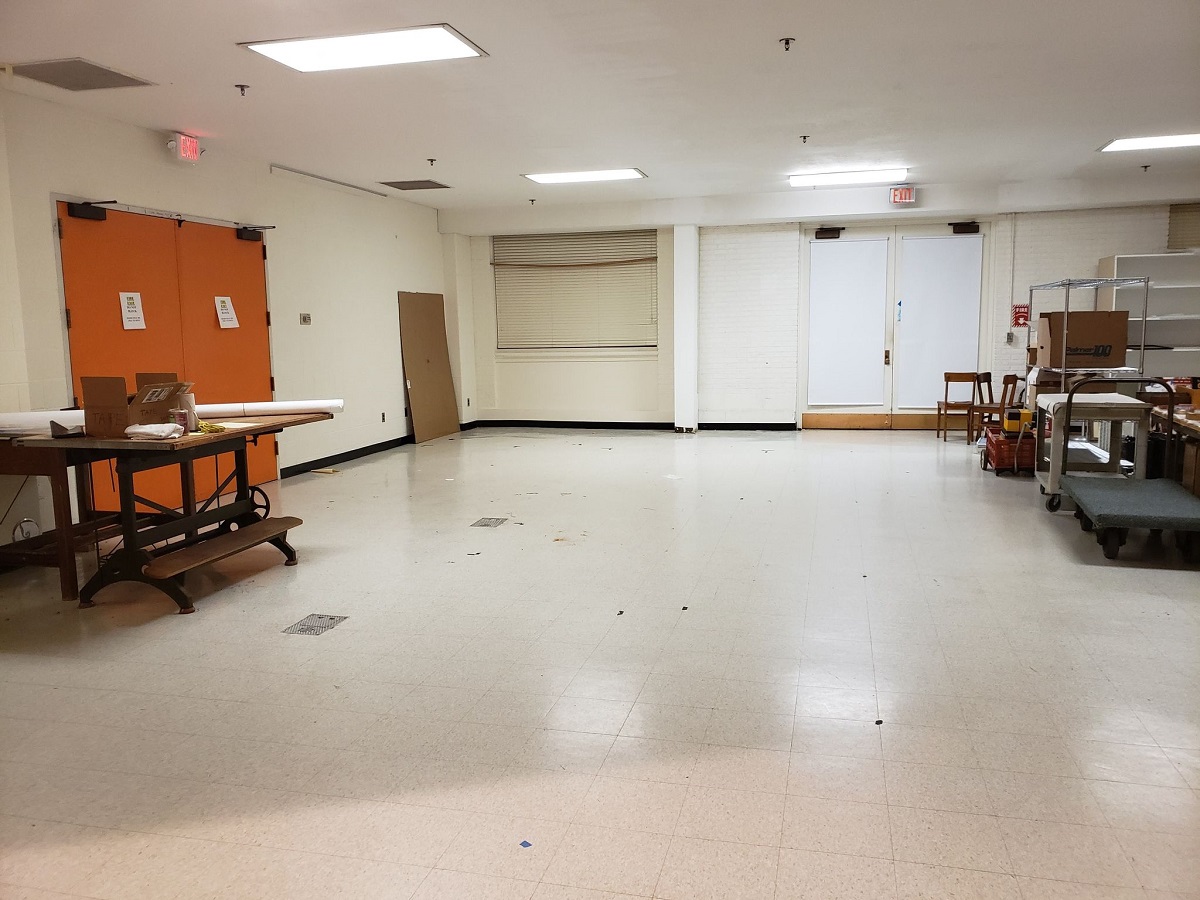 An image facing the doors and a very empty corner of the old Photo Studio. / Photo by Jillian Ferraiuolo 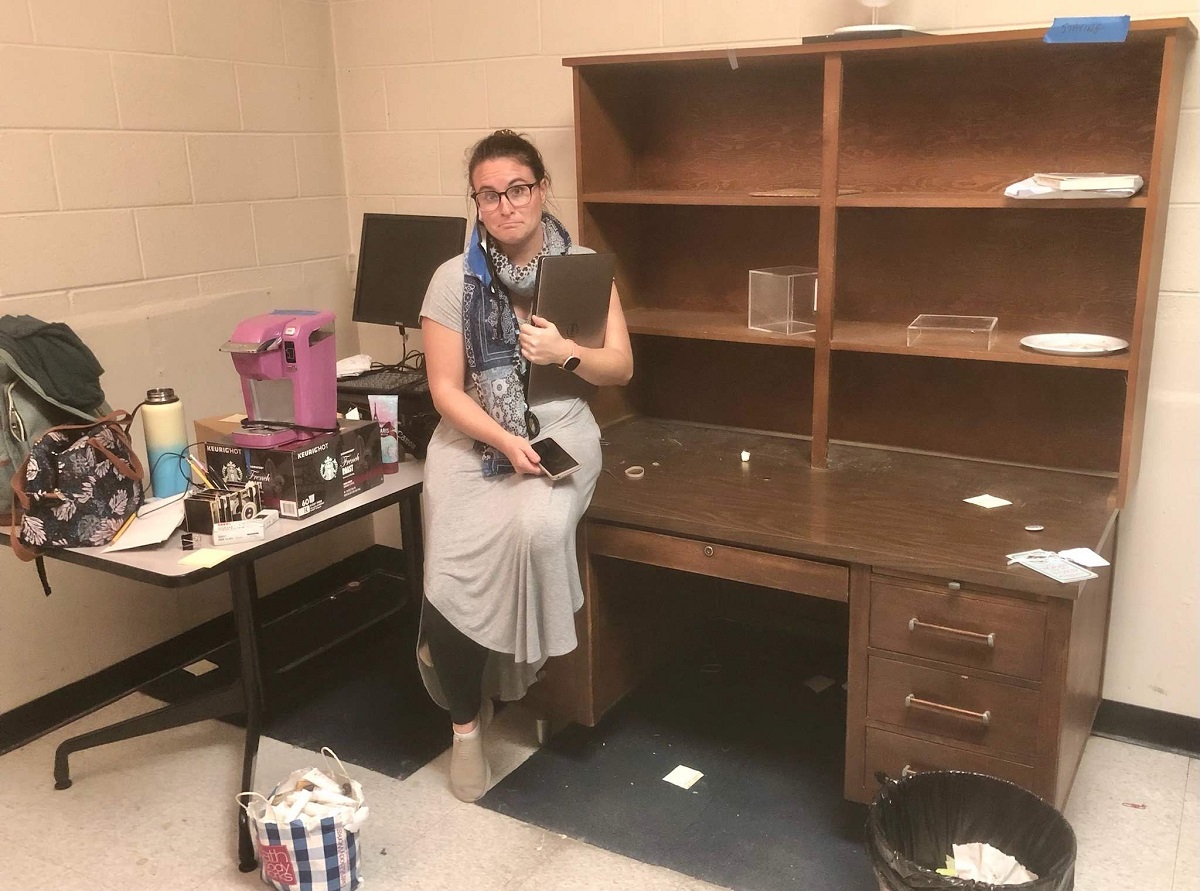 Me, as we said goodbye to our old office. (Don’t mind my expression, it had been a looooong day of moving!) / Photo by Rudy Ruzicska

Slowly but surely, we got closer and closer to having a useable new space in MSB. After unpacking multiple boxes; figuring out where we put this, that, and the other thing; and finding new homes for our equipment, our footprint spread out more and more. It certainly looked quite haphazard for a while as we awaited construction of pallet racks, finished wall installation, painting, and a new door. 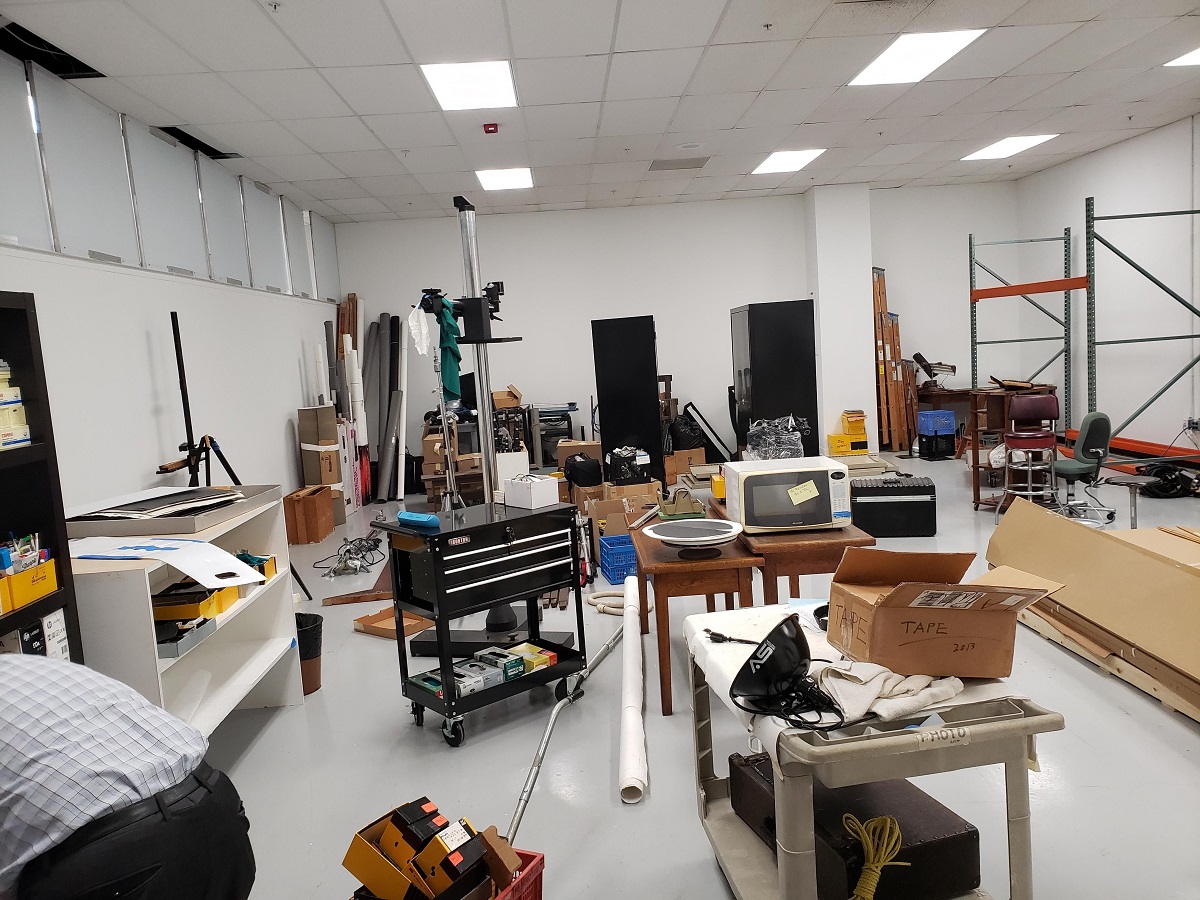 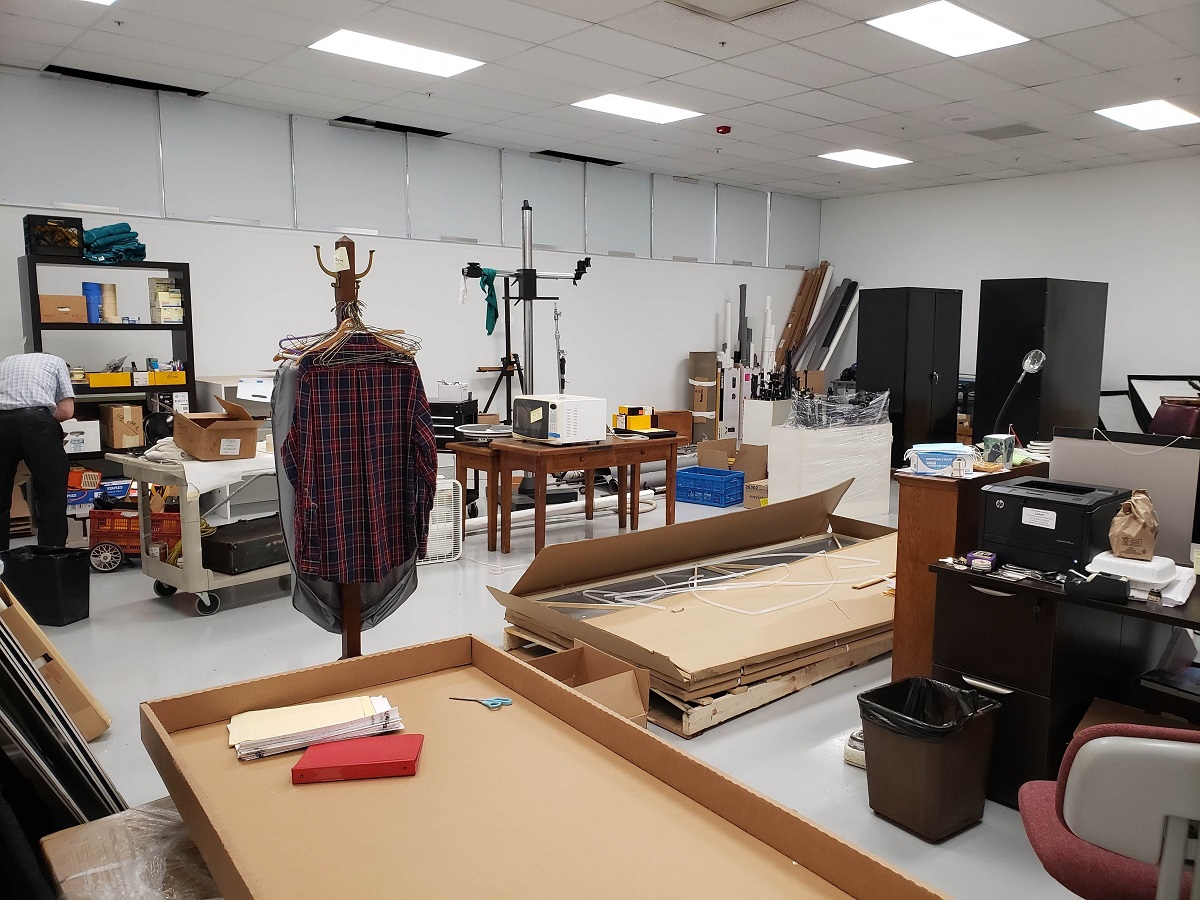 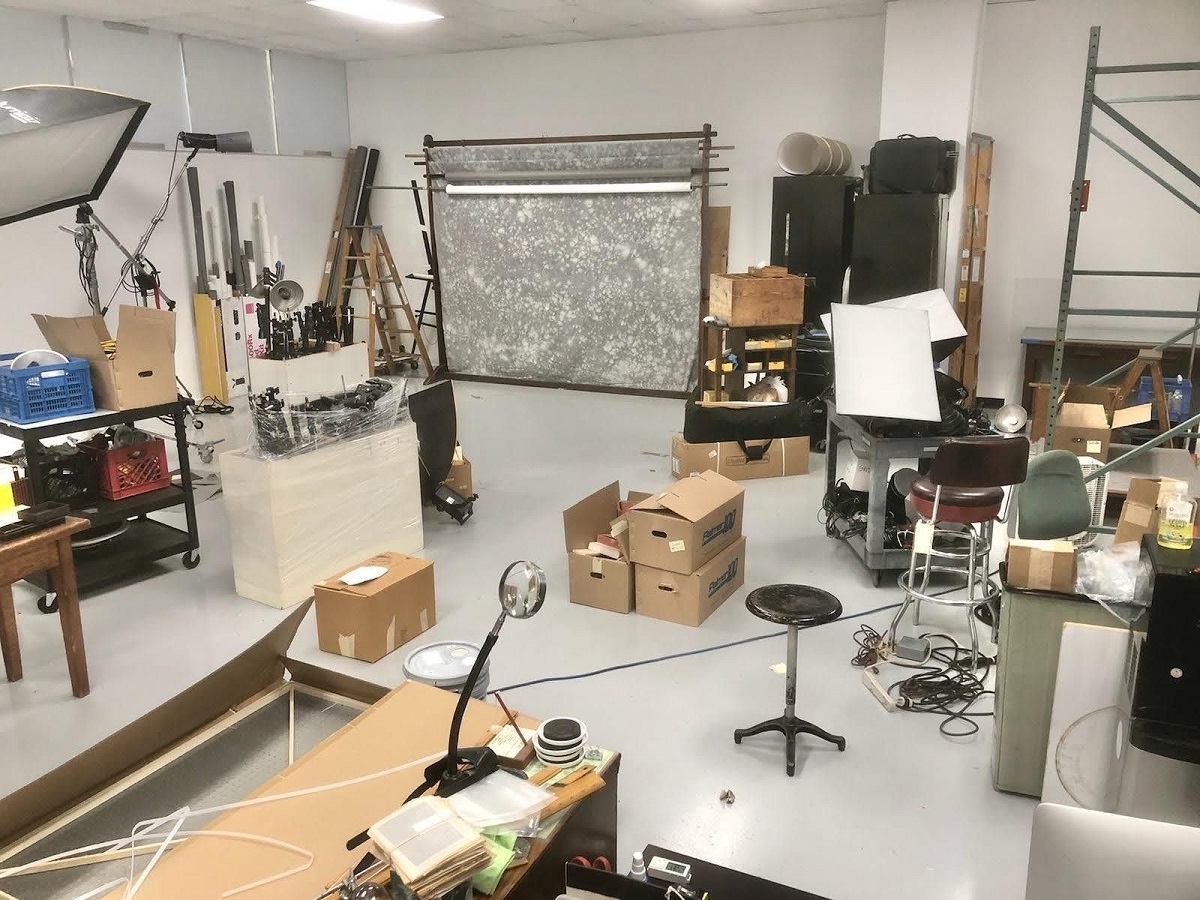 The new Photo Studio in MSB as we started to unpack and rearrange amidst the in-progress construction. / Photos by Jillian Ferraiuolo

One of the biggest issues we knew we were going to encounter in the new space was its size—we would have much less square footage than in the old Photo Studio. While we were able to get rid of a lot of things we didn’t need, there were still a lot we would need to keep. Our solution was pallet racking and pegboards. The Henry Ford’s carpenters assembled the pallet racking and custom-cut and affixed the pegboards to the sides of the racking. The tall rack gives us space above for long-term storage of things we don’t need as frequently, and the pegboard allows us to hang anything and everything, including cords, stands, and even lights. 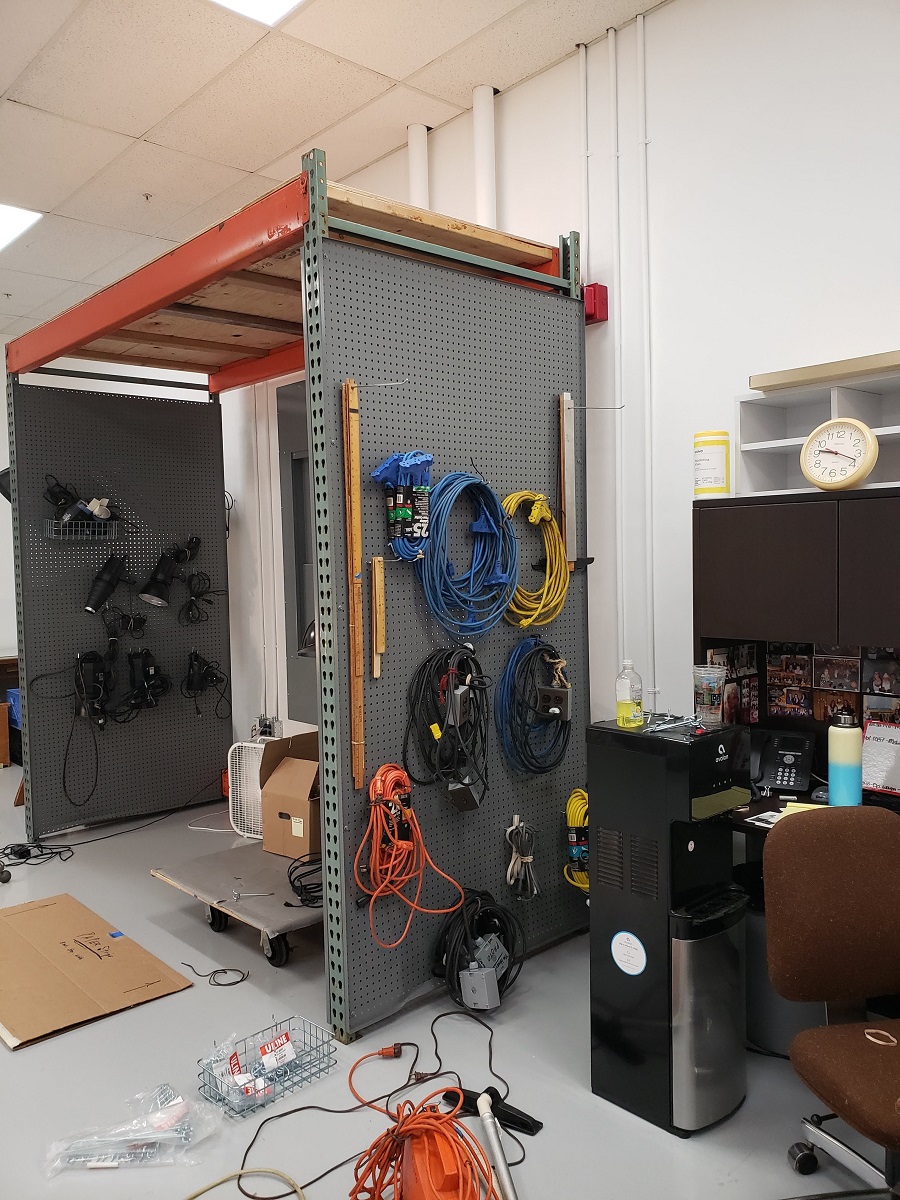 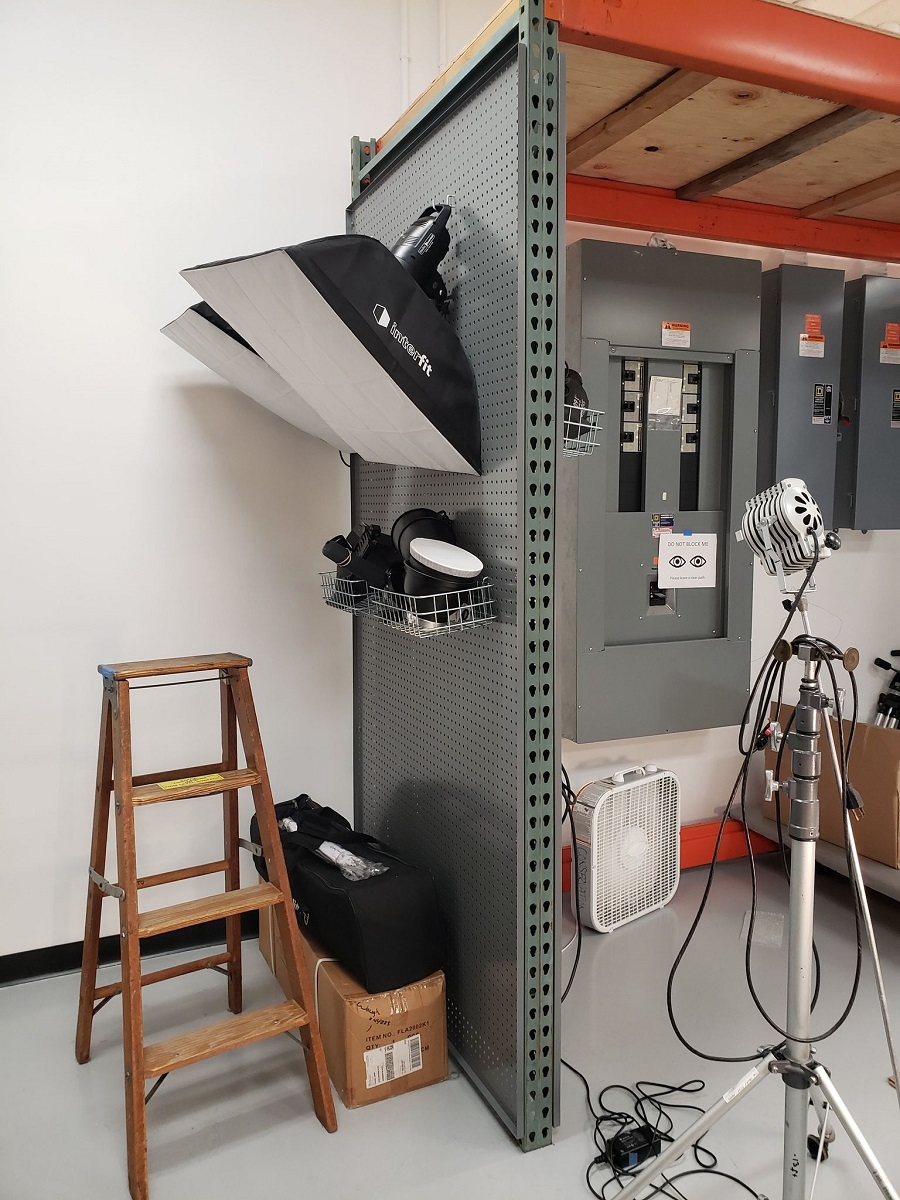 The pallet rack and pegboard provide needed extra space without taking up a large footprint in the room like a cabinet would. / Photos by Jillian Ferraiuolo

With time and elbow grease, we got closer and closer…. Until we were finally back in business and ready to take photos again! The first artifact that we photographed in the new Photo Studio in MSB is a tricycle used by Kevin Degen, which was featured in our Collecting Mobility exhibit last year. 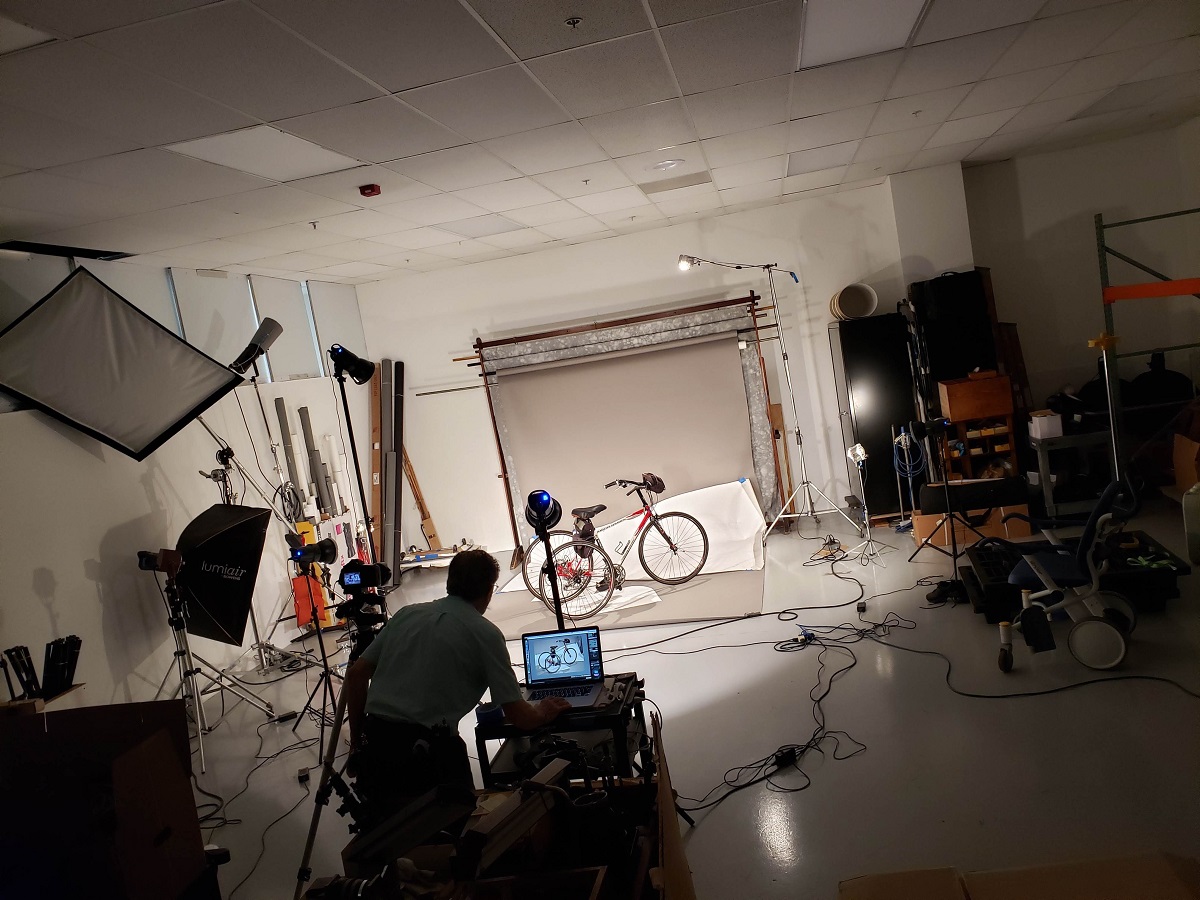 The set up for the tricycle photograph… / Photo by Jillian Ferraiuolo 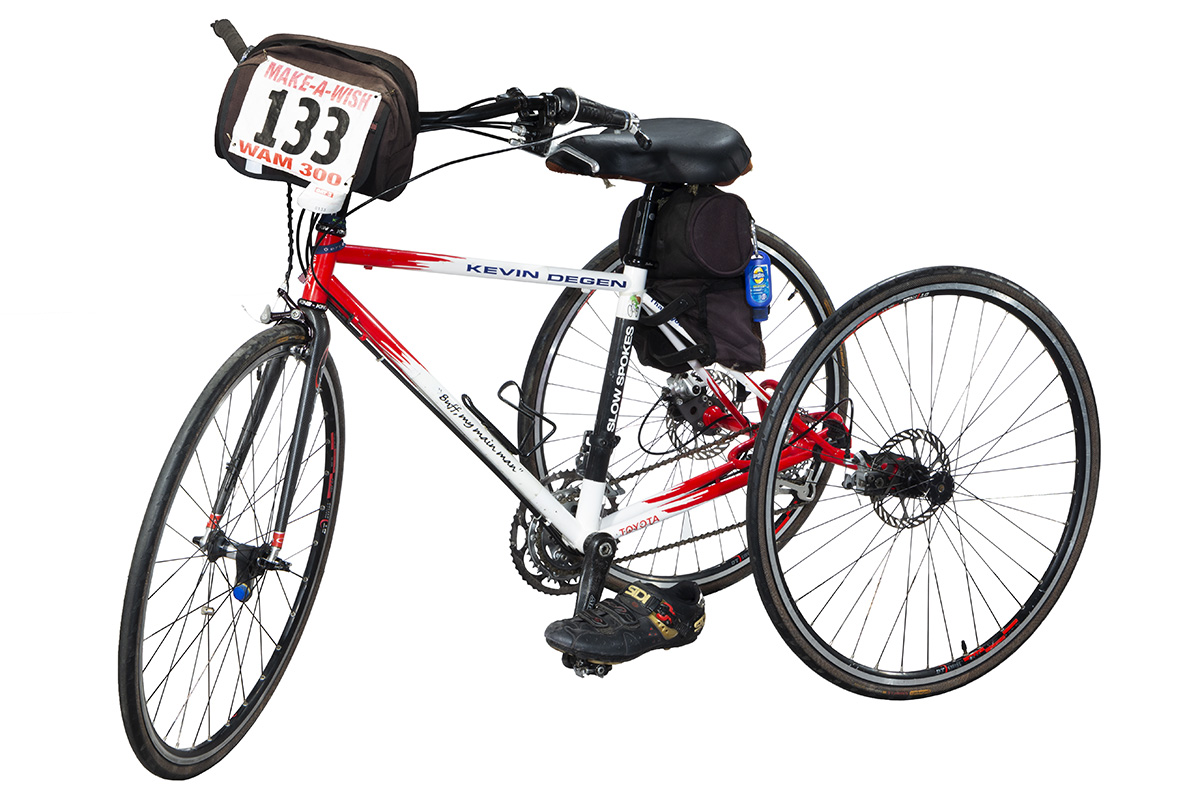 While this move was no small task, we were creative and ingenious when we needed to be and worked together with our talented colleagues to not only create this new space but to make it functional. It isn’t ideal to move from a larger Photo Studio space to a smaller Photo Studio space, and truth be told, we’re still figuring out how to be as efficient as we can with less area to work with. Still, we learned a lot through this process, especially in thinking outside the box and creating a functional Photo Studio from an entirely blank canvas—something The Henry Ford hadn’t had to do in a long time. 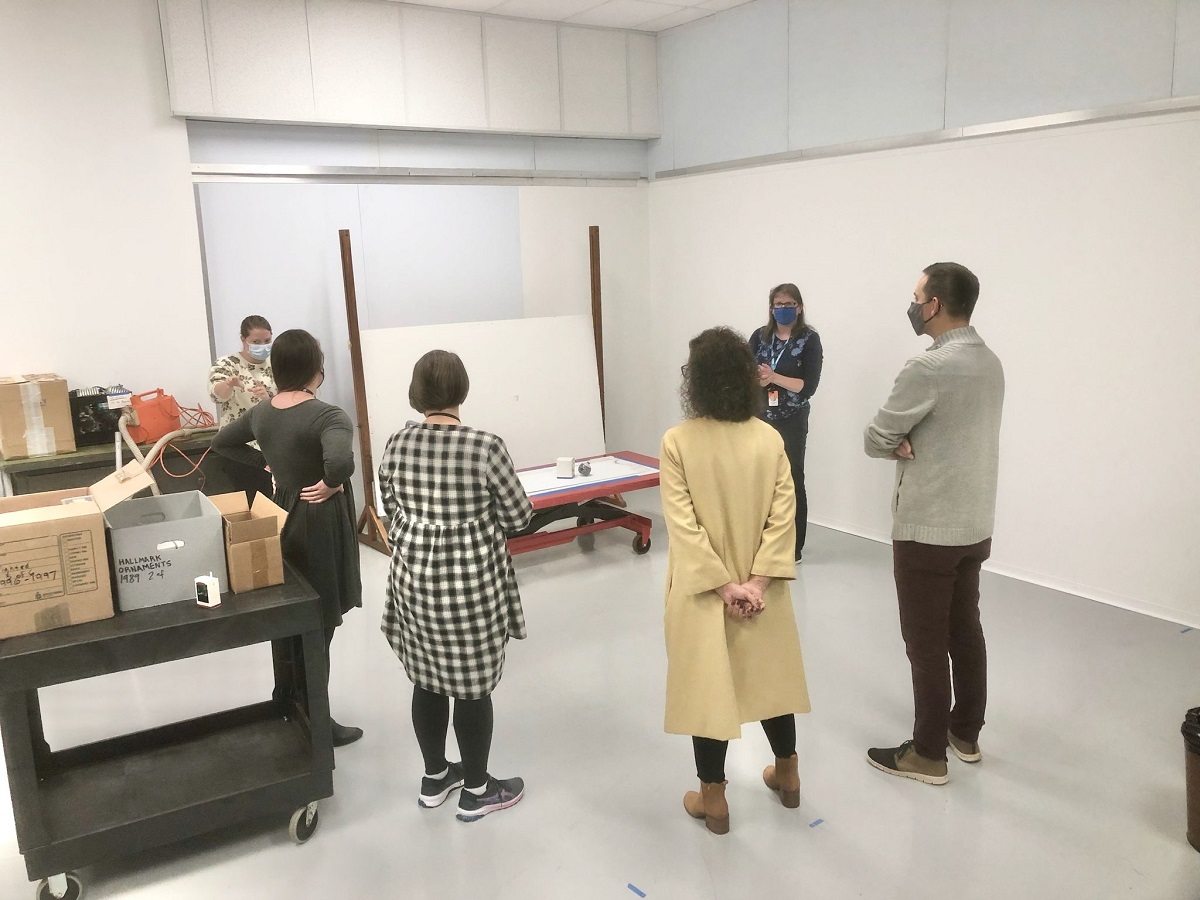 One of our first (though in these continuing pandemic days, rare) meetings in person in the new studio. / Photo by Rudy Ruzicska

Now, though we are still getting organized and finding permanent homes for all our supplies and equipment, we’re fully up and running as a photo studio again. Thanks for revisiting this journey with me!


Jillian Ferraiuolo is Digital Imaging Specialist at The Henry Ford.