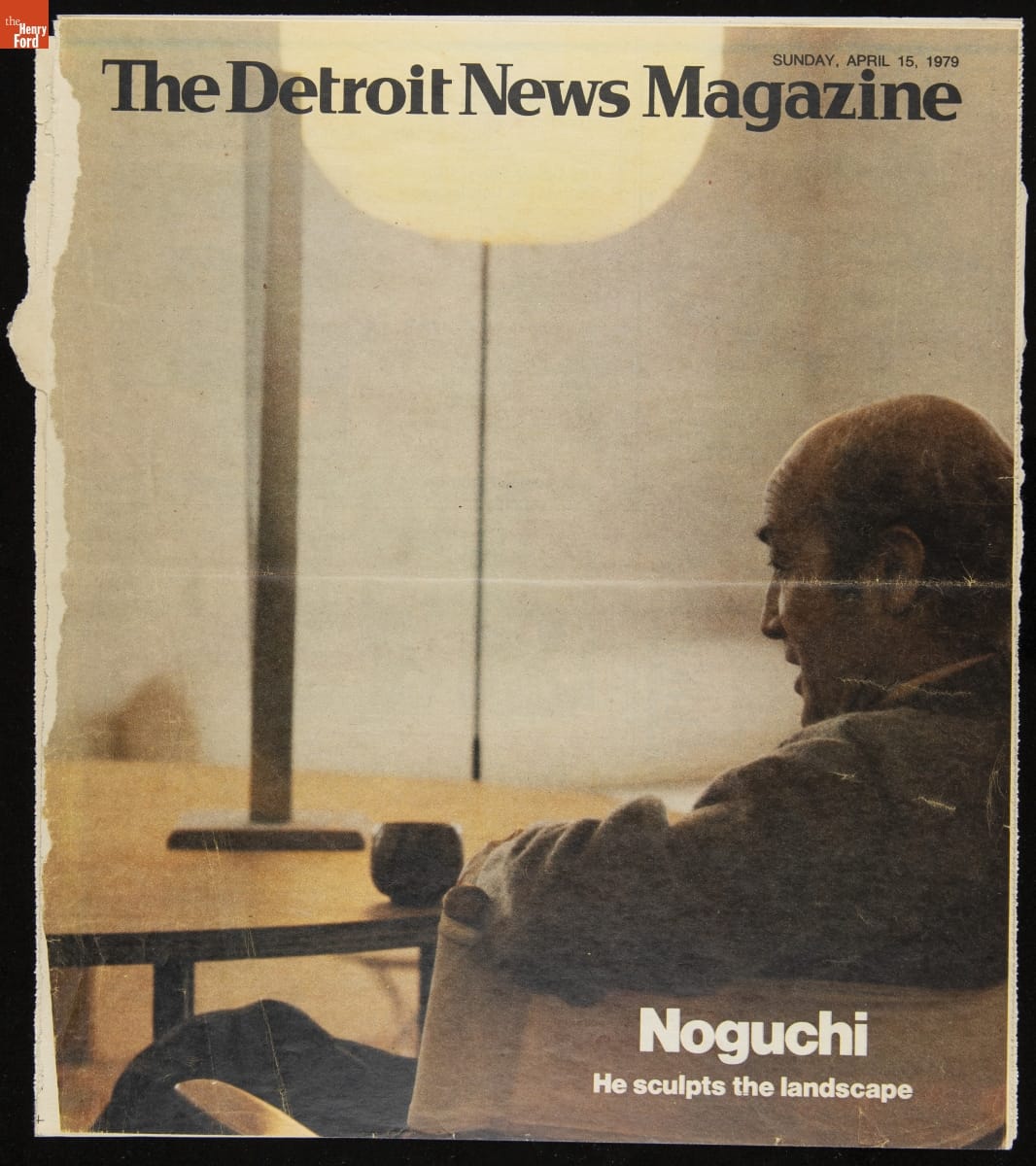 Isamu Noguchi sculpted the landscape, just as stated in the title of this 1979 Detroit News article. Born in 1904 in Los Angeles, California, to an American mother and Japanese father, Noguchi spent his childhood in Japan and his adolescence in rural Indiana. He attended the Interlaken School in LaPorte, Indiana, under the mentorship of the school’s founder, Dr. Edward Rumely. The school emphasized both craft and industry—a tension Noguchi would work within all his life, sometimes moving towards handicrafts, and other times toward mass production and new technologies.

In his own words, Noguchi was “foremost a sculptor.” The material, size, and function might change, but the result was always sculpture. In Noguchi’s early years working as an artist, he designed product packaging and sculpted busts on commission to help to pay his living expenses. Later, he designed furniture and lighting, like the Noguchi Table for Herman Miller and the electrified sculptures known as his Akari lamps. He ventured more fully into mass production and industrialization with the striking design of the molded Bakelite Radio Nurse—the first baby monitor.

Noguchi was always interested in environmental and space-planning projects—it’s just that the environments and spaces evolved from rooms to stage sets to entire landscapes. He had aspired to complete a large-scale environmental project for a civic space for many years. In 1933, Noguchi submitted his first of such proposals: a design for “Play Mountain,” a pyramidal play landscape intended for the heart of Manhattan’s Central Park. That project—and many other proposed landscape projects—did not come to fruition.

But late in his career, Noguchi embarked on one of his largest environmental projects—a 10+ acre site in downtown Detroit. In Noguchi’s hands, the landscape became a large-scale sculpture in the form of a public plaza. 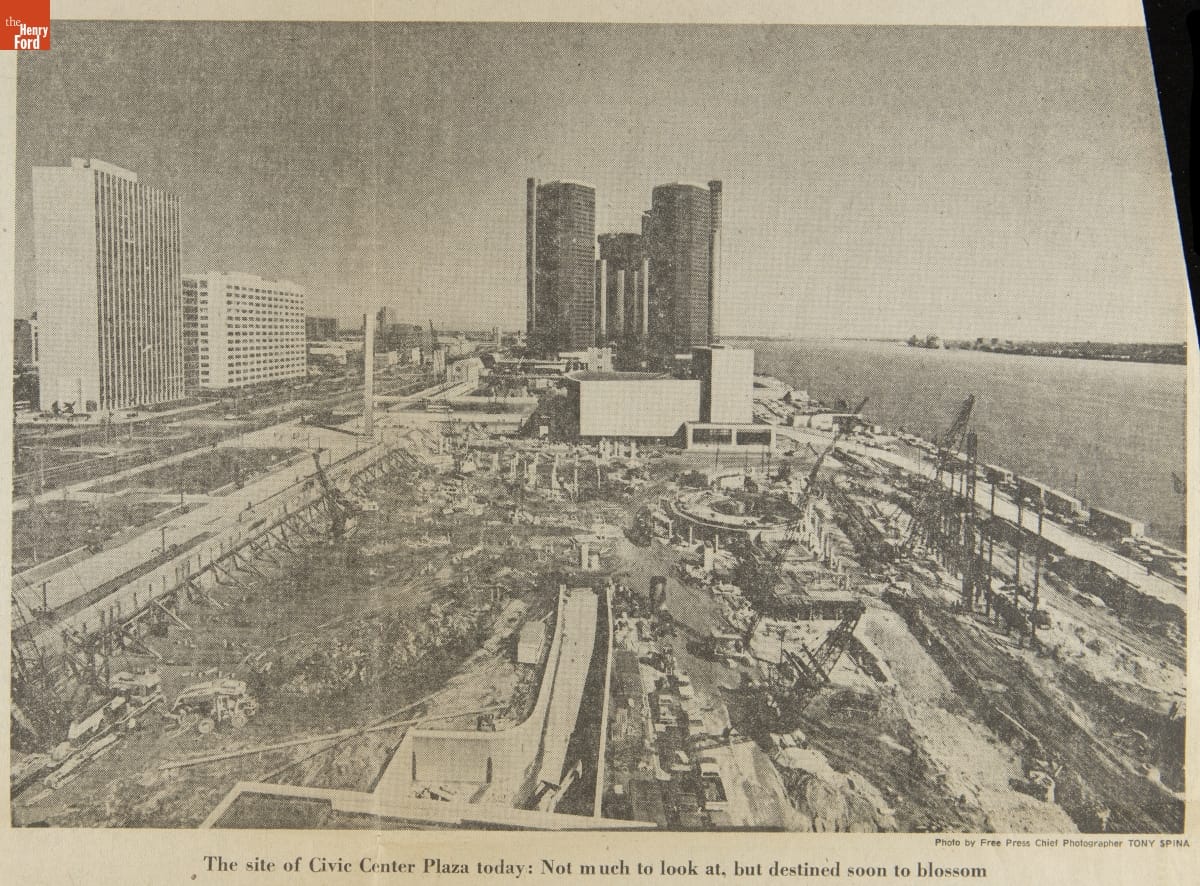 Detroit had long been interested in a civic park in the center of the city and by the late 1890s, the Detroit River waterfront had been identified as a prime location for such a park. Numerous designs were submitted—and even agreed upon—in the 80+ years between these early discussions and the completion of Hart Plaza (notably iterations designed by Eliel and Eero Saarinen of Cranbrook fame). Buildings were razed and space was made along the riverfront. Civic-minded buildings, meant to surround the park, were constructed, but the park itself languished. As politics and priorities shifted, so did the fate of the park. In the early 1970s, the park’s completion again became a priority, mostly due to a bequest of two million dollars by Anna Thomson Dodge for the completion of a fountain dedicated to the Dodge family. A committee was created to select an artist to complete the fountain, and the committee chose Isamu Noguchi’s proposal in 1971. Noguchi ended up with the commission to design not only the fountain, but the entire plaza.

Today, Noguchi’s design for the park still plays with the interaction between positive and negative space. Although the use of concrete is liberal, the plaza exudes a feeling of softness and flexibility alongside its strength. Noguchi designed Hart Plaza as a sculpture, a place where people could interact bodily with art. Below, we’ll explore a few of the key elements of the plaza. 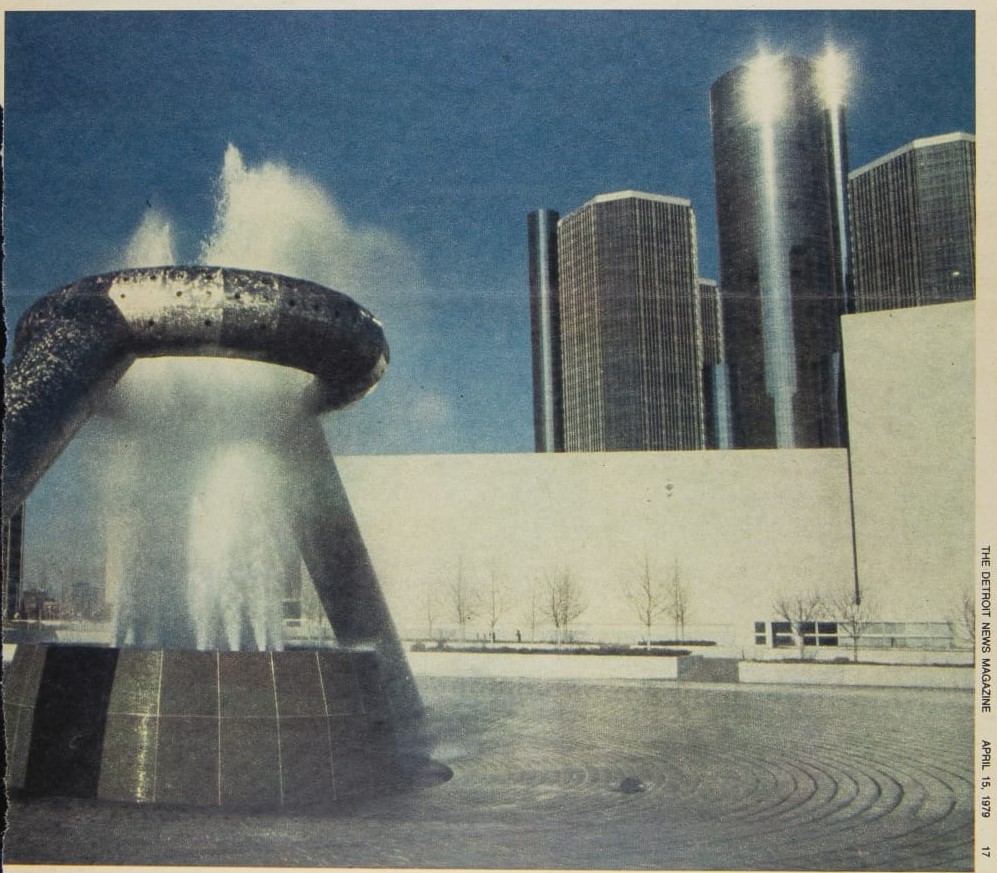 At Hart Plaza’s center, both figurately and literally, resides Noguchi’s now-acclaimed fountain. A modern futuristic abstraction of a fountain, it looks nothing like the traditional fountains found in most public parks and plazas the world over. In his presentation to the selection committee, Noguchi explained: “The great fountain, projected to be the most significant of modern times, will rise from the plateau of primal space. It will be an engine for water, plainly associating its spectacle to its source of energy, an engine so deeply a part of Detroit. It will recall and commemorate the dream that has produced the automobile, the airplane, and now the rocket, a machine become a poem.”

The “cloud creating, computer-operated” Dodge Fountain comprises a stainless-steel torus, or donut shape, hoisted 30 feet into the air that features 80 continually changing jet and light shows. A 120-foot-wide basin with a 7-foot-high granite pool creates the base of the fountain. Noguchi’s long-time collaborator, architect Shoji Sadao, was instrumental in ensuring the fountain’s successful completion and operation.

The Pylon, a 120-foot-tall tower, stands to greet the public at the city-side entrance to the park. Constructed of aluminum plating on stainless steel, the tower gently twists upwards, spiraling into the sky, as 120 lights illuminate the tower from its base. Noguchi explained that it symbolized “the spiral of life; the double helix upon which all life is based.” This was a fitting welcome for a park which Noguchi said would be “a people’s park, not a monument.”

Detroit’s leaders commissioned the park with numerous purposes in mind, but one of them took precedence in discussions—events and festivals, especially cultural and music festivals. Festivals need seating, and a stage. Noguchi provided multiple spaces for such purposes.  A large amphitheater, a recessed oval pushed into the ground as if imprinted into the land, could transform into an ice-skating rink in the winter. A pyramidal form that extrudes from the northeast section of the plaza provided more seating. Ingeniously, the pyramid also hides some of the mechanical equipment in a functional, graceful solution. In a change-order request by Detroit Mayor Coleman A. Young, Noguchi expanded the area underneath the plaza to incorporate space for offices, kiosks, a restaurant, and more. Noguchi’s concrete landscape on the river seems to push and pull at the earth, creating a finely balanced public space for Detroiters to enjoy. 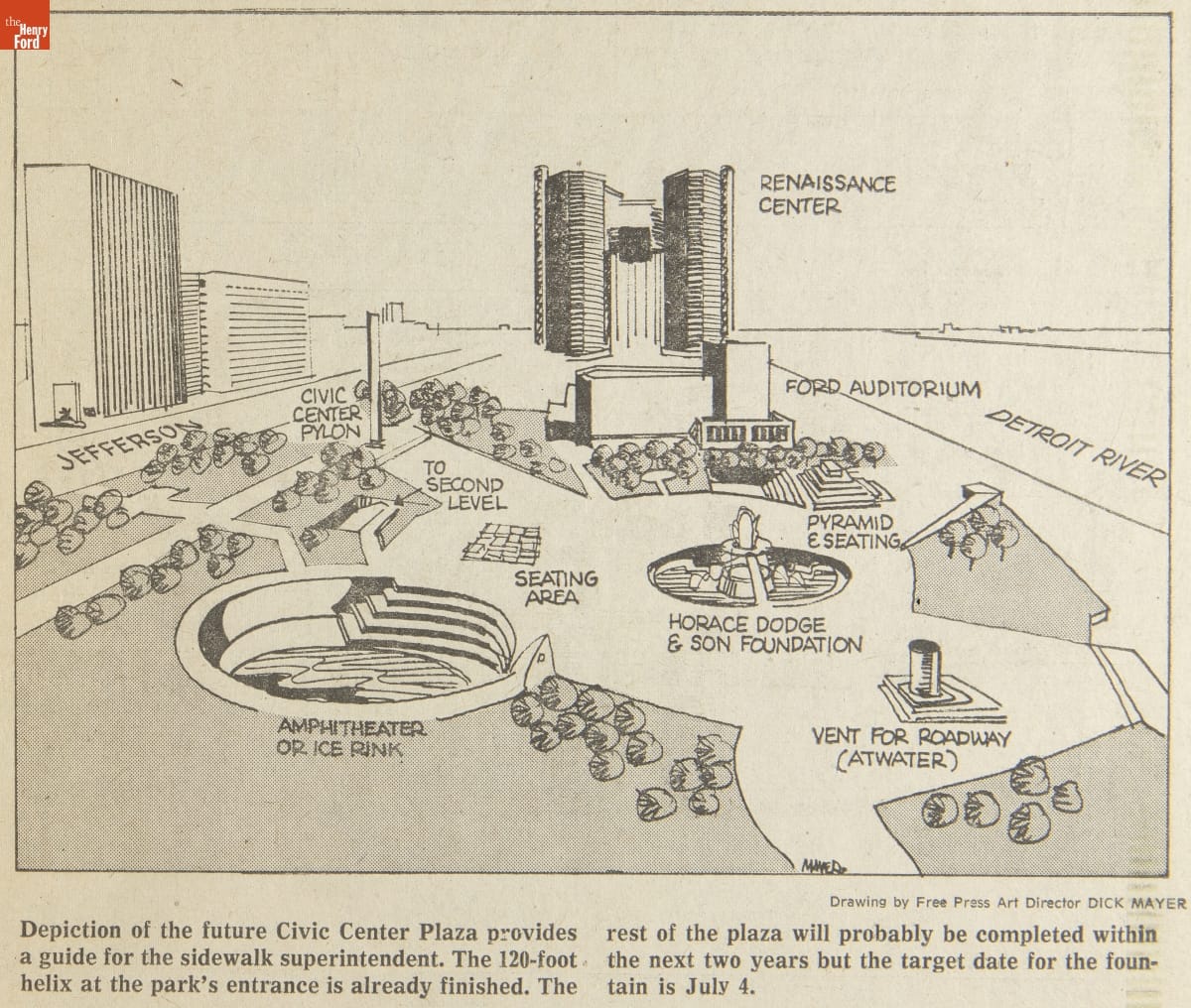 When Hart Plaza was dedicated on April 20, 1979, it completed a nearly century-old desire by Detroit’s leaders to have a civic plaza on the Detroit River. It also marked complete one of Noguchi’s most expansive projects and a decades-long desire to transform such a landscape. Detroit’s Hart Plaza serves as one of Noguchi’s crown jewels, showcasing his ability to sculpt on all levels—from small busts to the land at large.