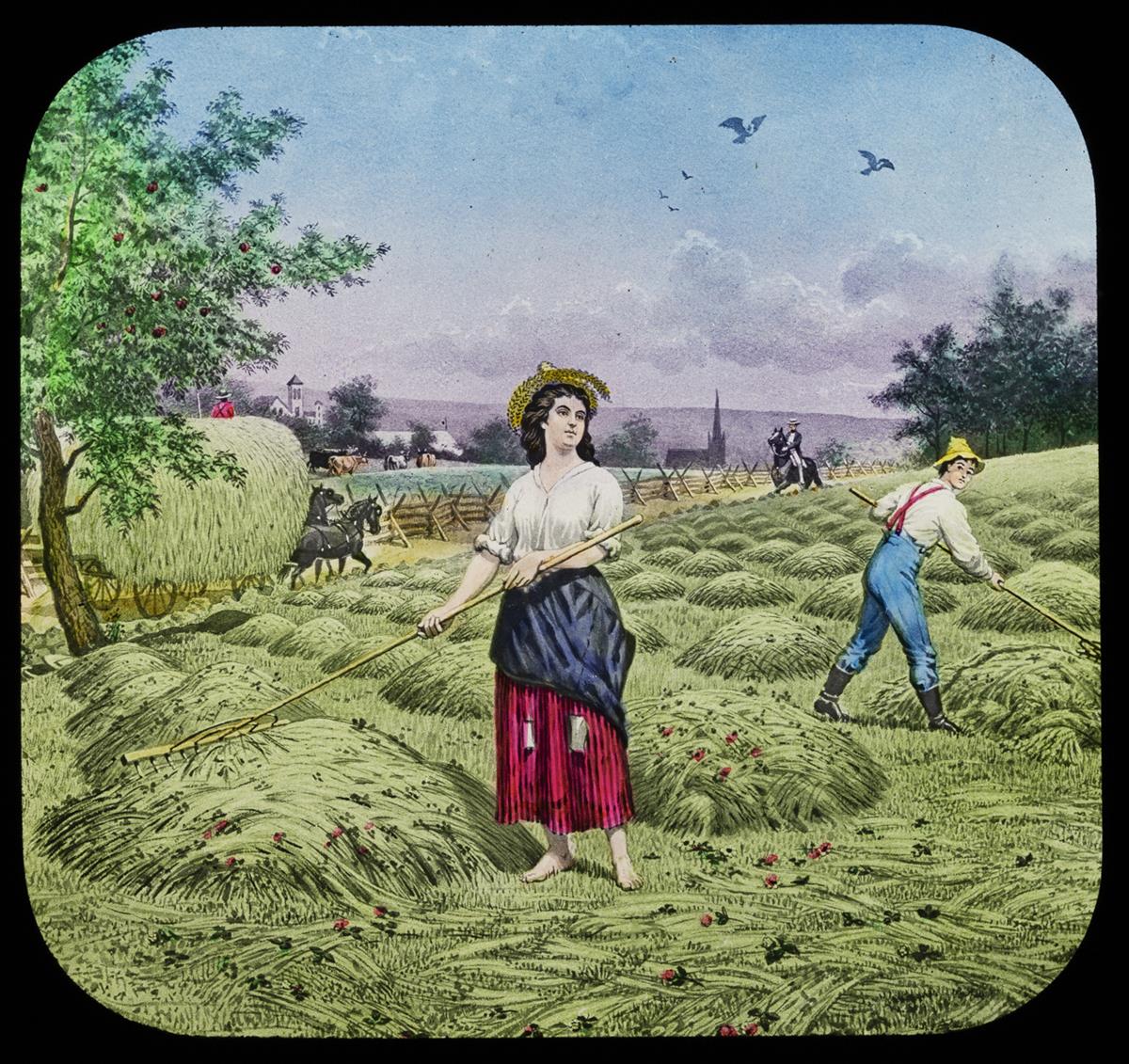 Lantern slide based on one of Joseph Boggs Beale's drawings. / THF622550

Joseph Boggs Beale produced illustrations used to create slides for magic lantern shows from the 1880s until about 1920. He was both artistic and prolific. During his career, Beale sketched over 2,000 images used in over 250 lantern slide sets. Beale's education and background led him to create illustrations that demonstrated a high level of cinematic quality for screen-projected images at a time before motion pictures. Ironically, it would be motion pictures that would end his career as a lantern slide illustrator.

Joseph Boggs Beale was born in 1841 to a well-connected Philadelphia family. His father was a prominent dentist, his late great-aunt was Betsy Ross (the seamstress whose family claimed she sewed the first United States flag), and his uncle Edmund Beale was a professional panorama showman. Entertainment opportunities abounded in one of the largest cities in the U.S.—and the Beale family took advantage of them. The Beales enjoyed theatrical productions and concerts, watched animal menageries pass by on the street, went to minstrel shows and panorama displays, and, of course, they saw magic lantern shows. 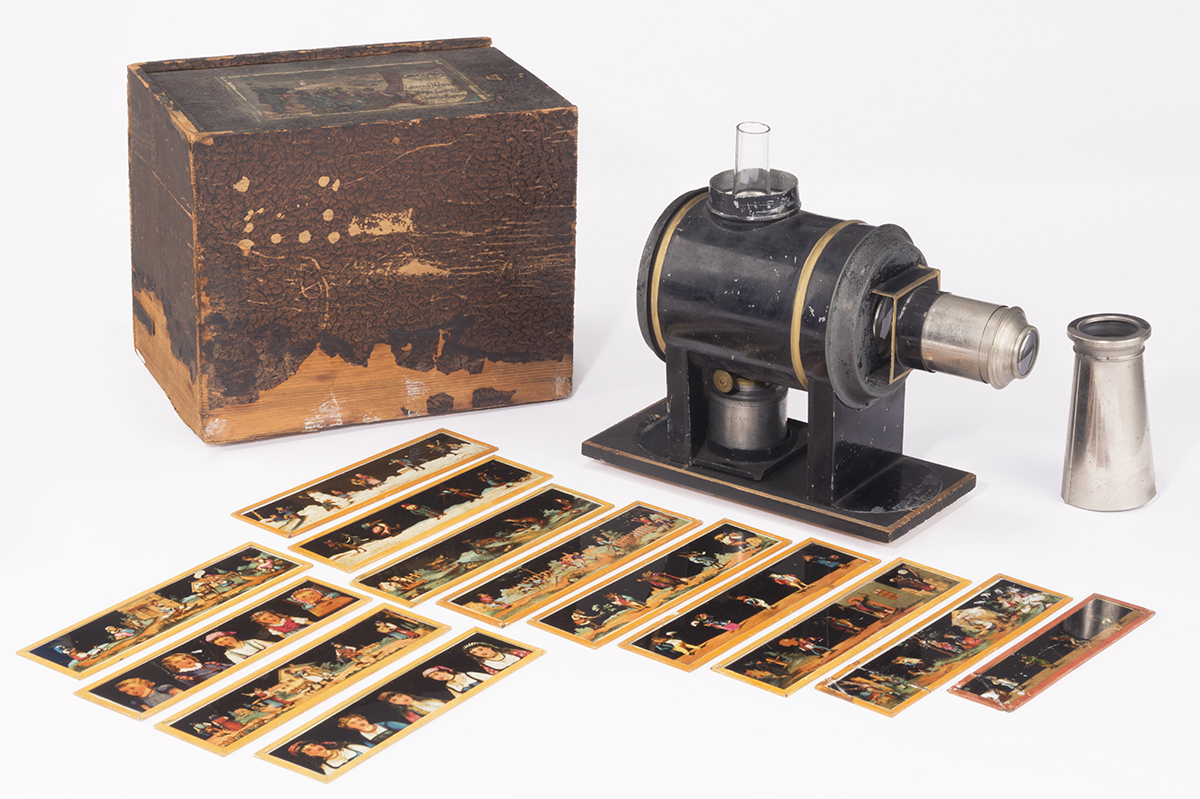 Magic lanterns use optical lenses and a light source to project images from glass slides onto a screen. / THF160397

Beale was an artistic child, and his family encouraged his talent. He attended Philadelphia's Central High School, where his artistic skills flourished. Later, he took classes at the Pennsylvania Academy of Fine Arts. Upon graduation from Central High School in 1862, the 21-year-old Beale became the school's professor of drawing and writing.

During the Civil War in 1863, as the Southern army invaded the quiet Pennsylvania farmlands west of Philadelphia, Beale joined the 33rd Pennsylvania Volunteers as the regimental artist. After a short stint with the military, he returned to teaching.

In 1865, Beale submitted a drawing of a baseball game to the editors of Harper's Weekly. The editors published it in the November issue. It was the beginning of his professional artistic career. Beale began submitting drawings to other major national periodicals, and soon his illustrations appeared in Frank Leslie's Weekly and Daily Graphic.

Beale married Marie Taffard of Philadelphia in 1868. The couple moved to Chicago, Illinois, where Beale worked for Baker and Company, a firm that provided wood engraving to its clients. After his wife died, Beale returned to Philadelphia. There he met Caspar Briggs, owner of C.W. Briggs & Company, one of the country's premier lantern slide firms. Briggs originally hired Beale on a freelance basis. It was the beginning of a nearly 40-year career creating lantern slide illustrations.

Caspar Briggs's father, Daniel, started a lantern slide business in Massachusetts in the 1850s and transferred the company to his son in 1868. Caspar moved the company to Philadelphia in 1872—the city was rapidly becoming a hub for lantern slide production. Two years after the move, Briggs bought out Langenheim Brothers, a company noted for developing the process for photographic lantern slides. 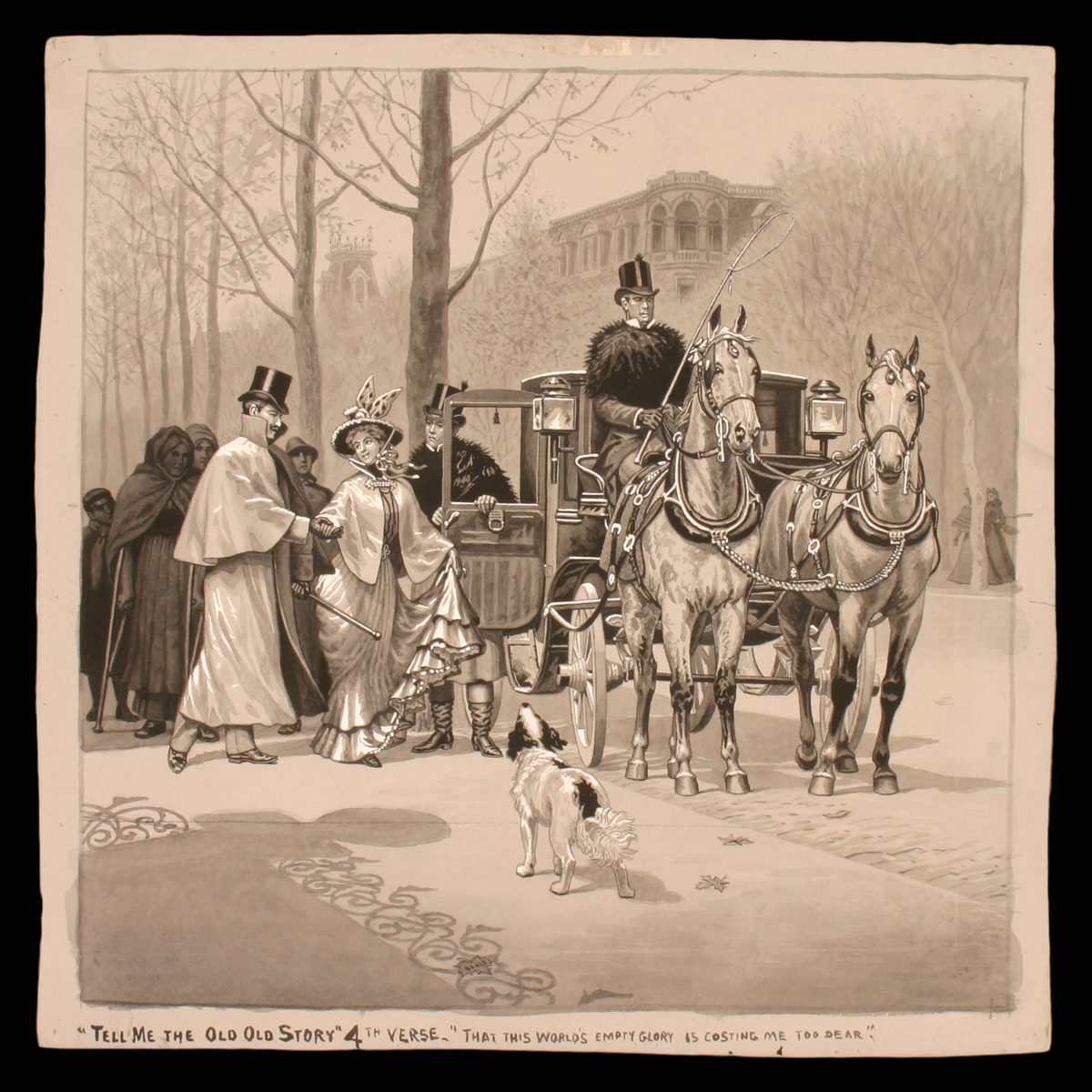 One of the drawings created by Beale for a set of slides illustrating the hymn "Tell Me the Old, Old Story." / THF124495

Instead of using photographic images for his slides, Briggs decided to photograph illustrated works—wash drawings or paintings—made by his company’s artists to create lantern slides. Photographed onto glass, then usually hand-colored, these images recounted well-known stories and poems, chronicled history, and illustrated songs. Briggs's vision built an impressive body of work, making his company one of the leading producers of lantern slides in the country. Presentations using slides purchased from Briggs's company thrilled audiences and inspired political, religious, and fraternal organizations throughout America. The artistic and creative works of Joseph Beale would be central to Briggs's production of lantern slides.

Beale as a Lantern Slide Artist

Briggs first hired Beale on a freelance basis around 1880, one of several artists that Briggs employed. But Beale's artistic hand outshone the other illustrators at Briggs's company—or any other lantern slide company. Beale understood the storytelling power his illustrations could convey when projected onto a screen in a darkened room or theater. 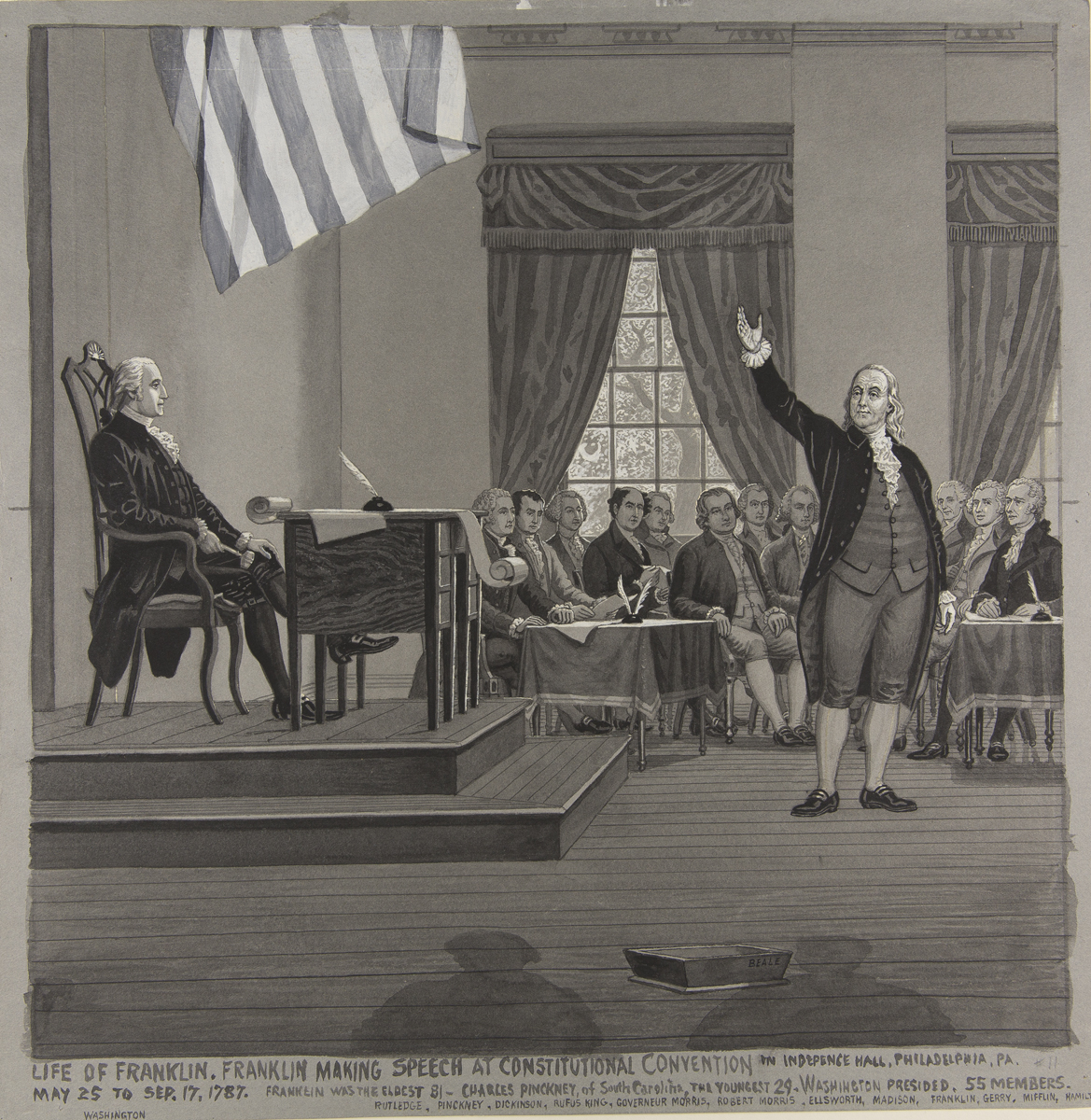 A pivotal moment depicted by Beale from one of his illustrations for the "Life of Benjamin Franklin" series. / THF289382

Drawing on his childhood experiences, education, and early work, Beale created lantern slides that have been described as cinematic. He brought an artistic and dramatic continuity to the story and song sets he created. His detailed illustrations depicted defining moments of a story—moments that had to be conveyed in one slide, rather than in multiple moving images. And while his works are detailed, they are not distracting—organized images focus the viewer's gaze on important action. His illustrations are highlighted and shaded to provide a tonal range that, when transferred to glass and hand-painted by Briggs's colorists, imparted a quality rarely produced by other lantern slide artists. Beale knew how to tell a story using projected images and is considered one of the first great screen artists. 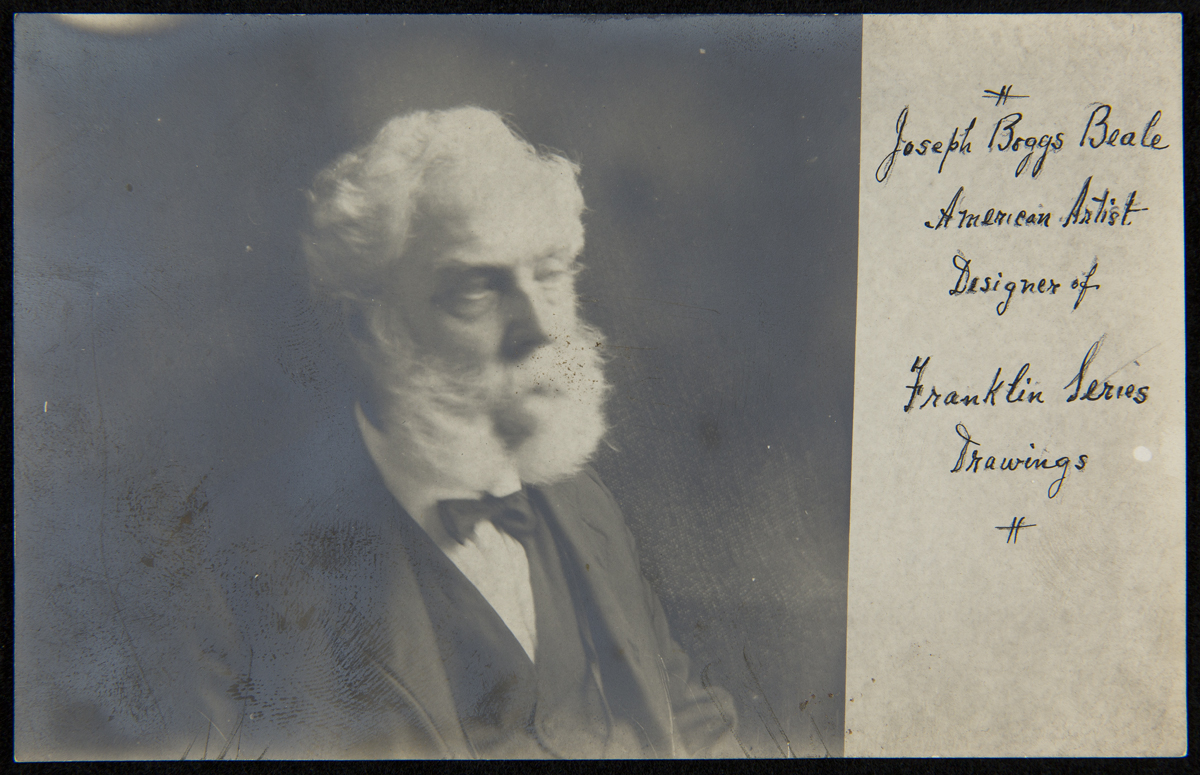 Magic lantern slide shows were in decline by 1900. The invention of motion pictures in the 1890s slowly began to displace lantern slide entertainment. Beale continued to work for Briggs but was laid off in 1909. He freelanced for Briggs until about 1920. By then, motion pictures dominated the screen entertainment industry. Beale died in 1926 and his illustrations were dispersed. Many found a home in museums and educational institutions across the United States, including The Henry Ford.

You can view original illustrations by Beale, and lantern slides based on his drawings, in The Henry Ford's Digital Collections.