Lamy’s Diner Gets a Makeover 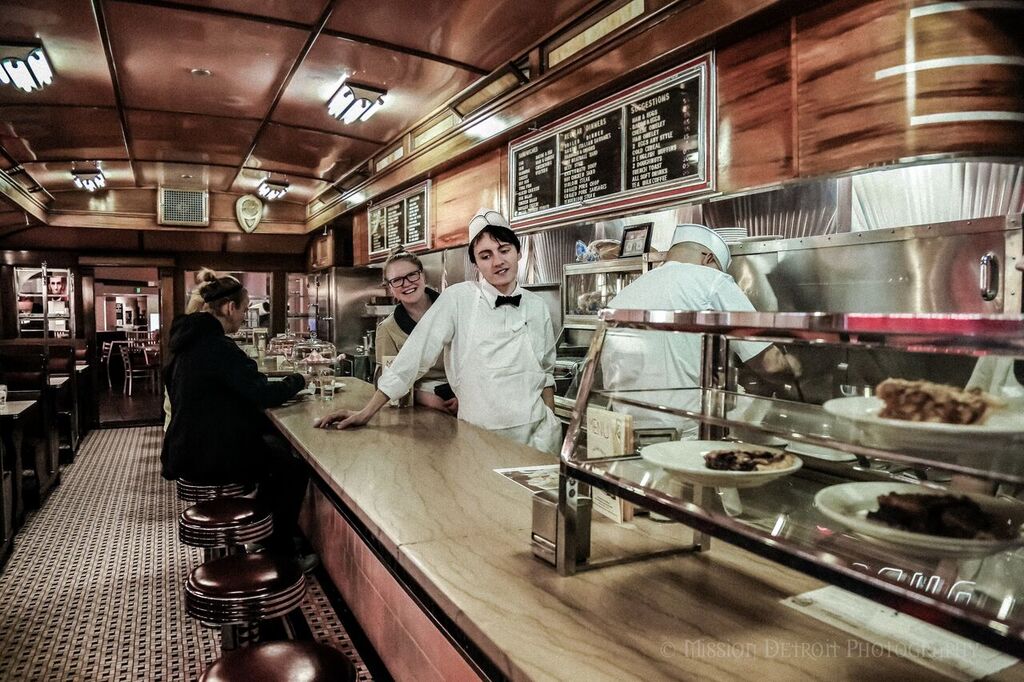 Where can you get a real diner experience, especially here in Michigan? The answer is Lamy’s Diner inside Henry Ford Museum of American Innovation—an actual 1946 diner brought here from Massachusetts, restored, and operating as a restaurant in the Museum since 2012.

Now Lamy’s Diner is more authentic, more immersive, and serving more delicious food than ever! What’s behind this makeover? 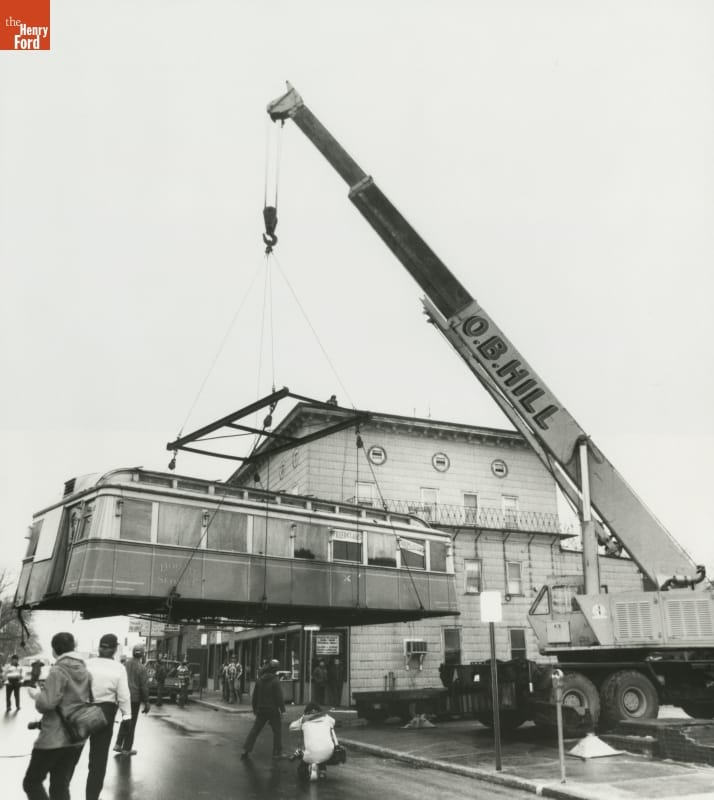 In 1984, the Henry Ford Museum purchased the Clovis Lamy's diner. It took a crane to lift the diner in preparation for transporting it from Hudson, Massachusetts. Once here, it was restored to its original 1946 appearance. THF 25768

Back in the 1980s, museum staff worked with diner expert Richard Gutman to track down an intact vintage diner for the new “Automobile in American Life” exhibit. Gutman not only found such a diner in Hudson, Massachusetts (moved twice from its original location in Marlborough, Massachusetts) but also helped in its restoration and in interviewing its original owner, Clovis Lamy, about his experiences running the diner and about the menu items he served.

Diners are innovative and uniquely American eating establishments. Lamy, like other World War II veterans, was lured by dreams of prosperity and the independence that came with being an entrepreneur of his own diner. As he remarked, “during the war, everyone had his dreams. I said if I got out of there alive, I would have another diner—a brand new one.” 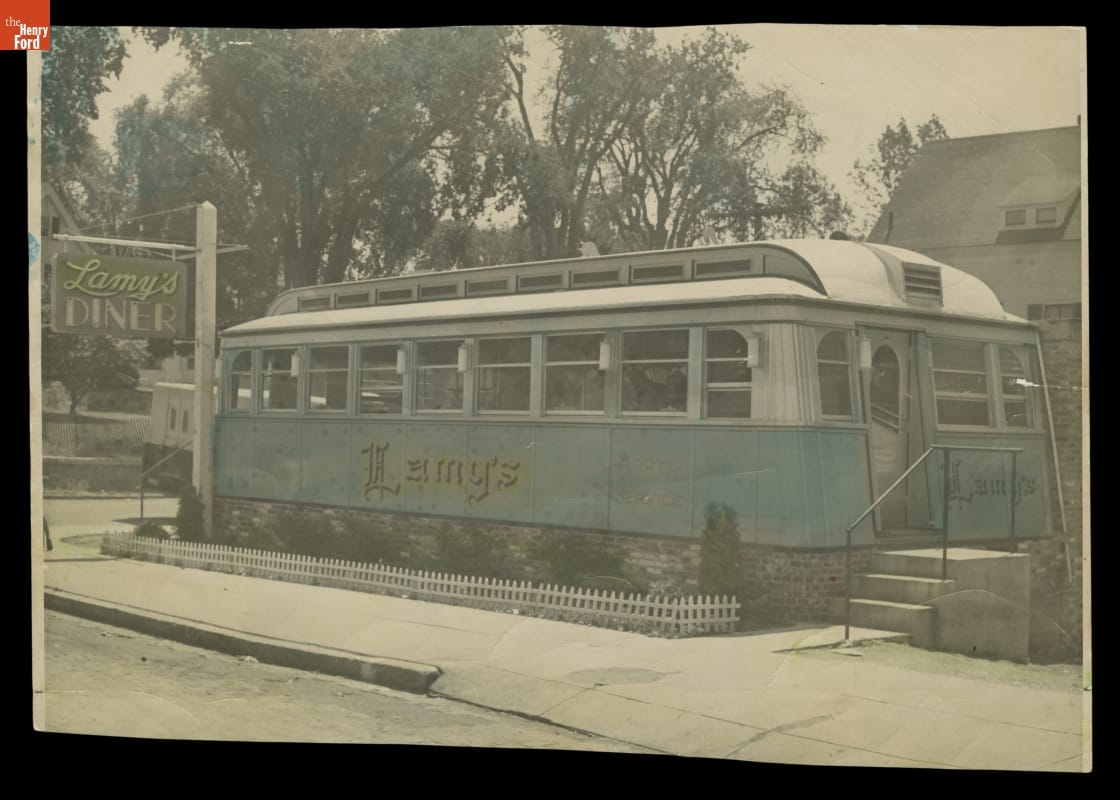 This photograph shows Lamy's Diner on its original site in Marlborough, Massachusetts, 1946. The diner moved three times, first to Framingham, Massachusetts, next to Hudson, Massachusetts in 1949, and finally to the Henry Ford Museum in 1984. THF88966

Sure enough, when he was discharged from the army, he ordered a 40-seat, 36- by 15-foot model from the Worcester Lunch Car Company, a premier diner builder at that time. It boasted a porcelain enamel exterior, 16 built-in stools, six hardwood booths, a marble counter, and a stainless steel back bar. Lamy could choose the diner’s colors, door locations, and outside lettering. He and his wife Gertrude visited the Worcester plant once a week, eager to check on its construction. 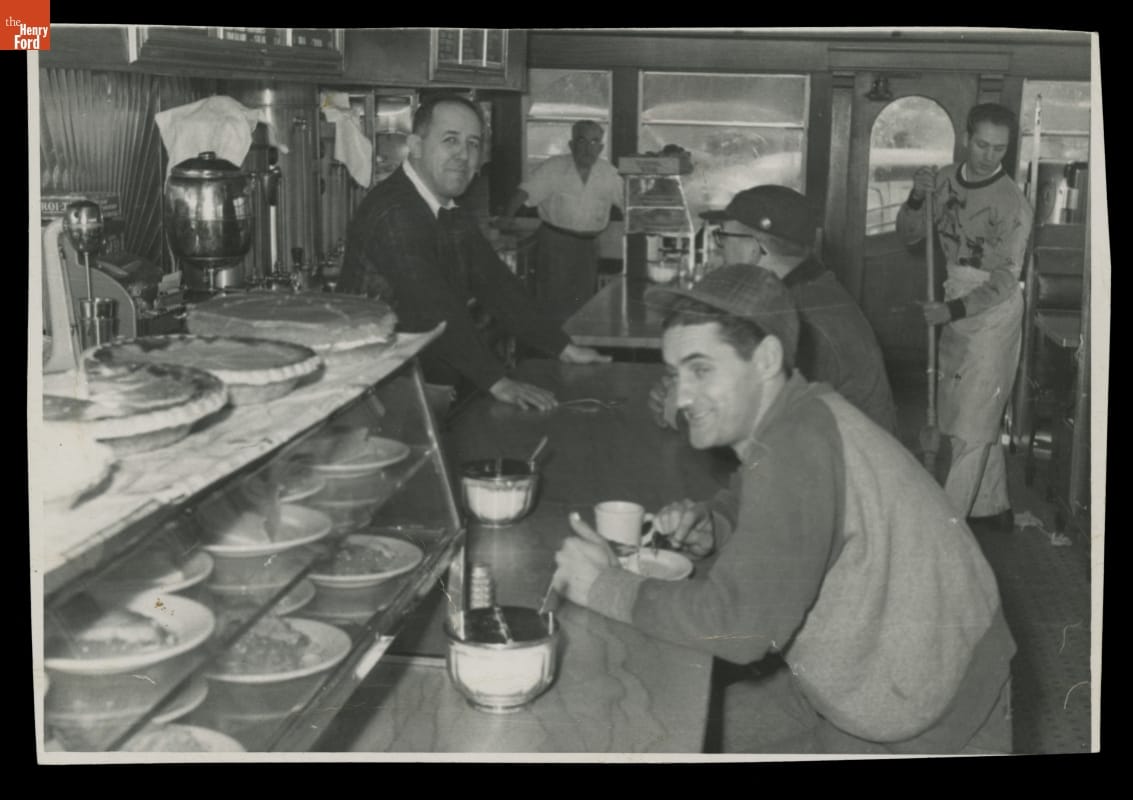 Clovis Lamy stands behind the counter of his diner in Massachusetts. His favorite part of running a diner was talking to his customers. THF 114397

Lamy’s Diner opened for business in April 1946, in Marlborough, Massachusetts. As Lamy remembered, business was brisk:

We jammed them in here at noon—workers from the town’s shoe shops—and we had a good dinner trade too… People stopped in after the show…[and] after the bars closed, the roof would come off the place.

During the long hours of operation (the place closed at 2 a.m.), the kitchen turned out everything from scrambled eggs to meat loaf. To Clovis Lamy, there was no better place than standing behind the counter talking to people.

But the dream had its downside. The work day was long. He was seldom able to eat with his family. After moving the diner to Framingham, Massachusetts, he sold the business in 1950. The new owner moved it down the road to Hudson. 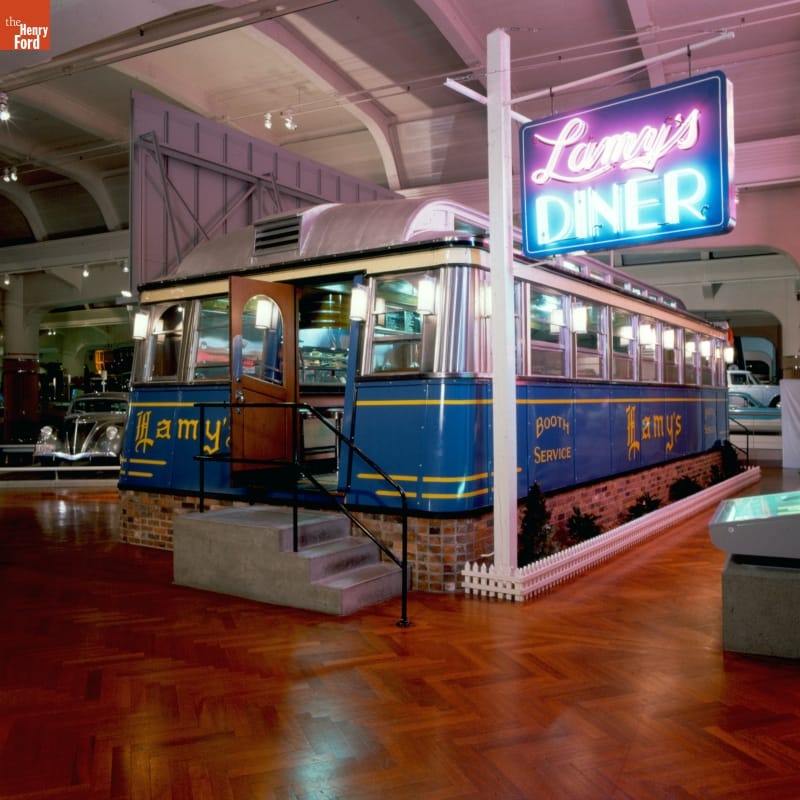 When Clovis Lamy and his wife viewed the diner at the 1987 opening for “The Automobile in American Life” exhibition, they confirmed that it looked as good as new.  “Even the sign is the same,” he remarked later with a tear in his eye. 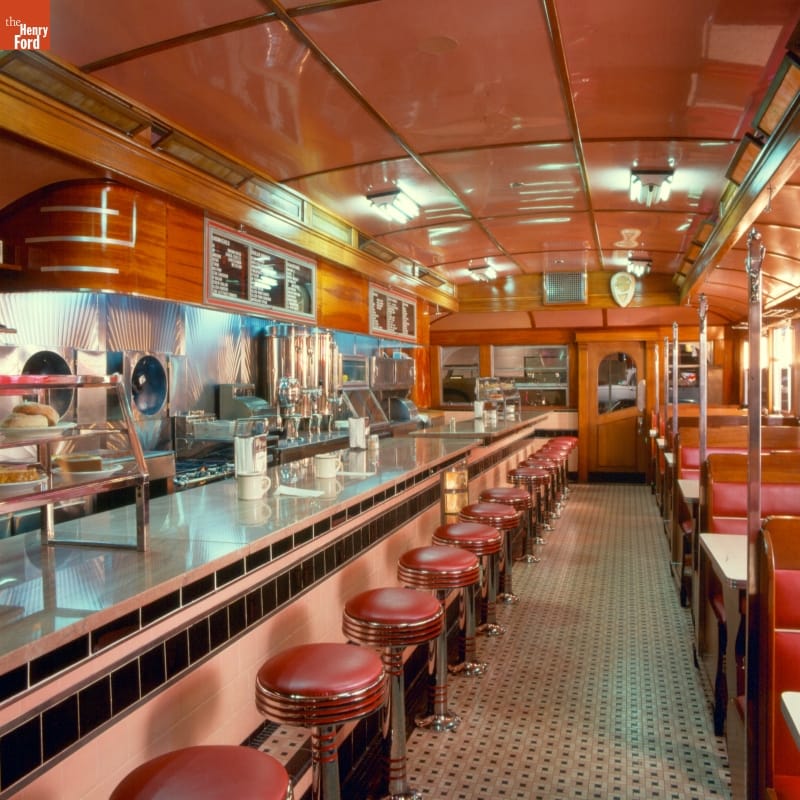 For 25 years, no food was served at Lamy’s Diner in the museum. It was interpreted as a historic structure, until the opening of the new “Driving America” exhibit in 2012, when museum staff decided to once again serve diner fare there. Delicious smells of toast and coffee wafted out of its doors, while the place hummed with activity. Museum guests sat in the booths, on stools at the counter, or at tables on the new deck with accessible seating. They could choose entrees, beverages, and desserts from a menu that was loosely inspired by diner fare of the past.

Then, in 2016, Lee Ward, the new Director of Food Service and Catering, came to me and posed the question, what if we served food and beverages at Lamy’s that more closely approximated what customers would have actually ordered here in 1946? The diner is already an authentic, immersive setting. What if we took it even further and truly transported guests to that time and place?  I have always believed in the power of food to both transport guests to another era and to serve as a teaching tool to better understand the people and culture of that era. Over the years, I’ve helped create Eagle Tavern, the Cotswold Tea Experience, the Taste of History menu, the Frozen Custard Stand, and cooking programs in Greenfield Village buildings. So I excitedly responded, sure, we could certainly do that!

But, as the chefs and food service managers at The Henry Ford began to ply me with endless questions about the correct menu, recipes, and serving accoutrements for a 1946 Massachusetts diner, I realized I needed help. 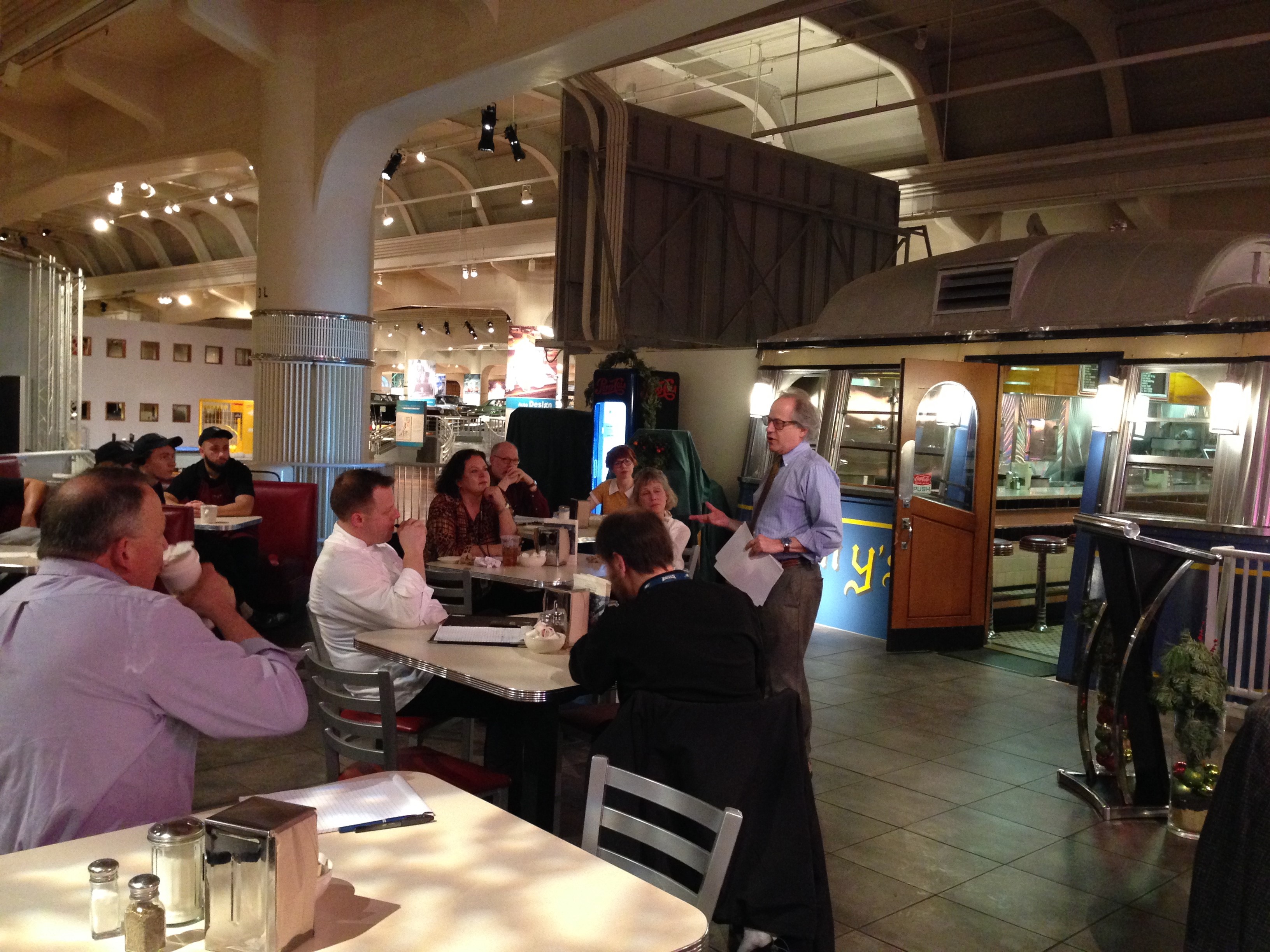 Fortunately, help was forthcoming, as Richard Gutman—the diner expert who had found Lamy’s Diner for us in the 1980s—was overjoyed to return to the project and give us ideas and advice. And the 300-some diner menus he owned in his personal collection didn’t hurt either.  In fact, they became our best documentation on diner foods and what they were called in 1946, as well as the graphic look of the menus.

Cookbooks of the era offered actual recipes for the dishes we saw listed on the menus, while historic images of diner interiors provided clues as to what the serving staff might wear, what kinds of dishes customers ate on, and what was displayed in the glass cases on the counter.

All of these are reflected in the current Lamy’s Diner experience. Here’s a glimpse of what you’ll encounter when you visit Lamy’s after its recent makeover: 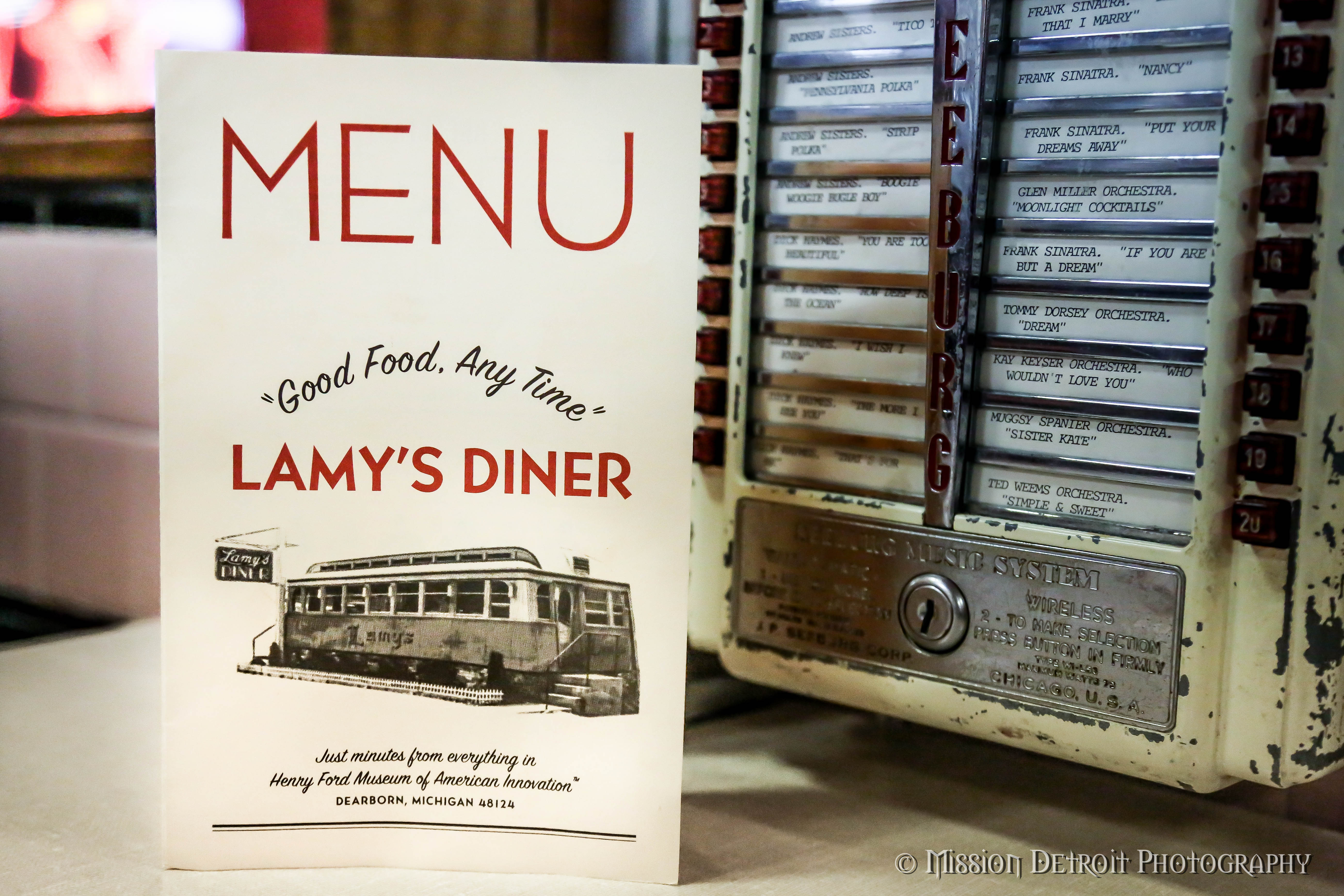 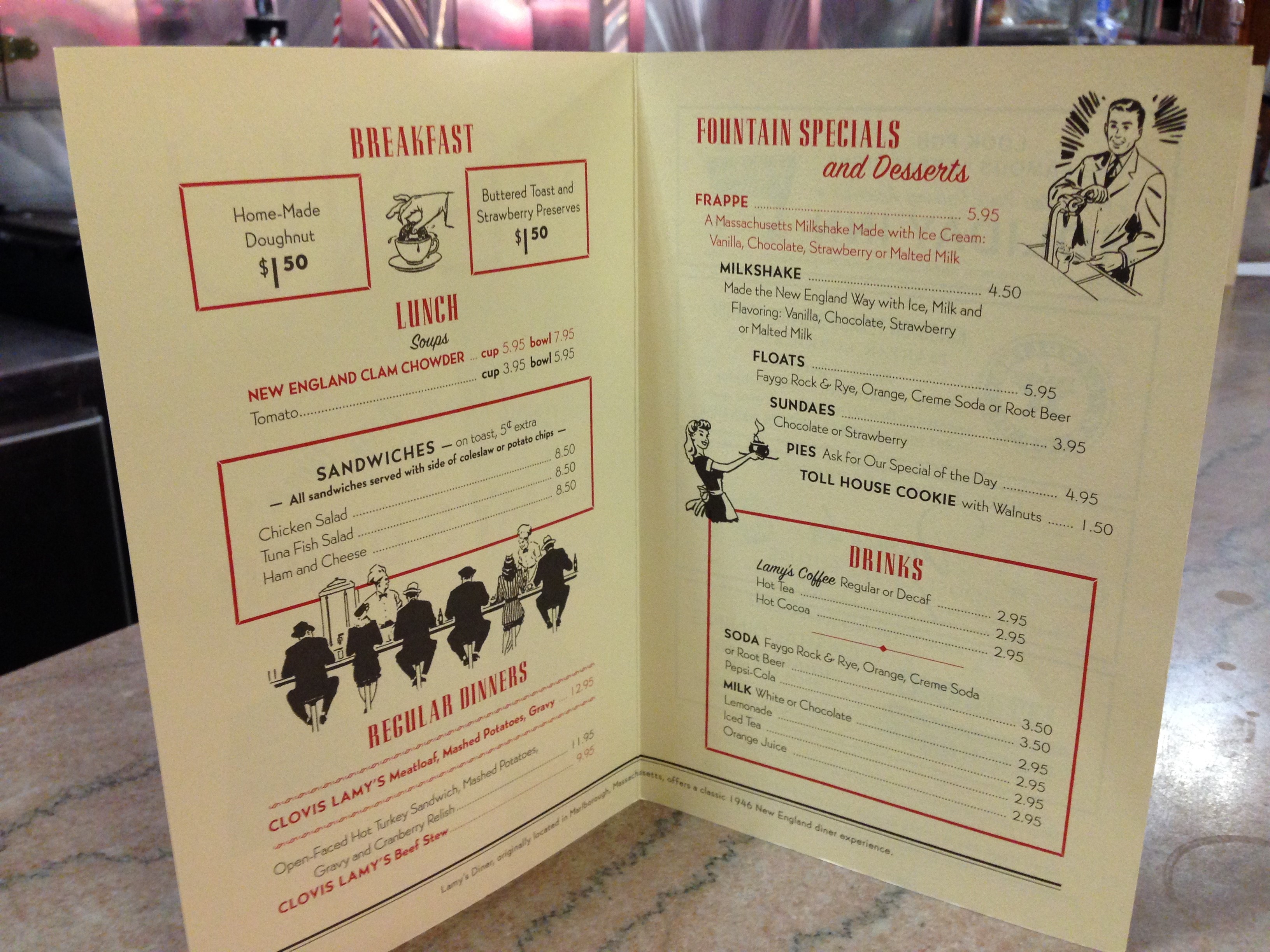 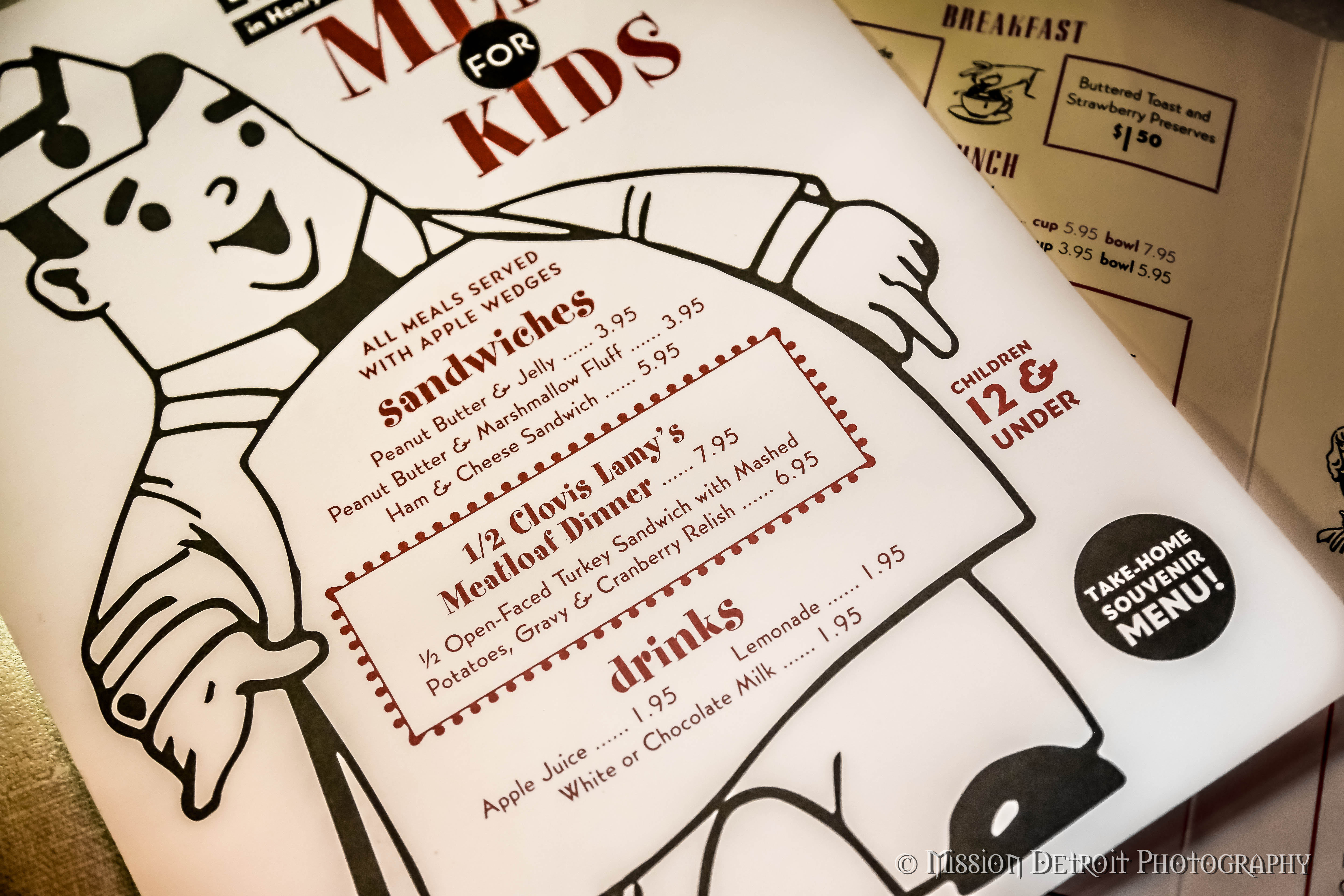 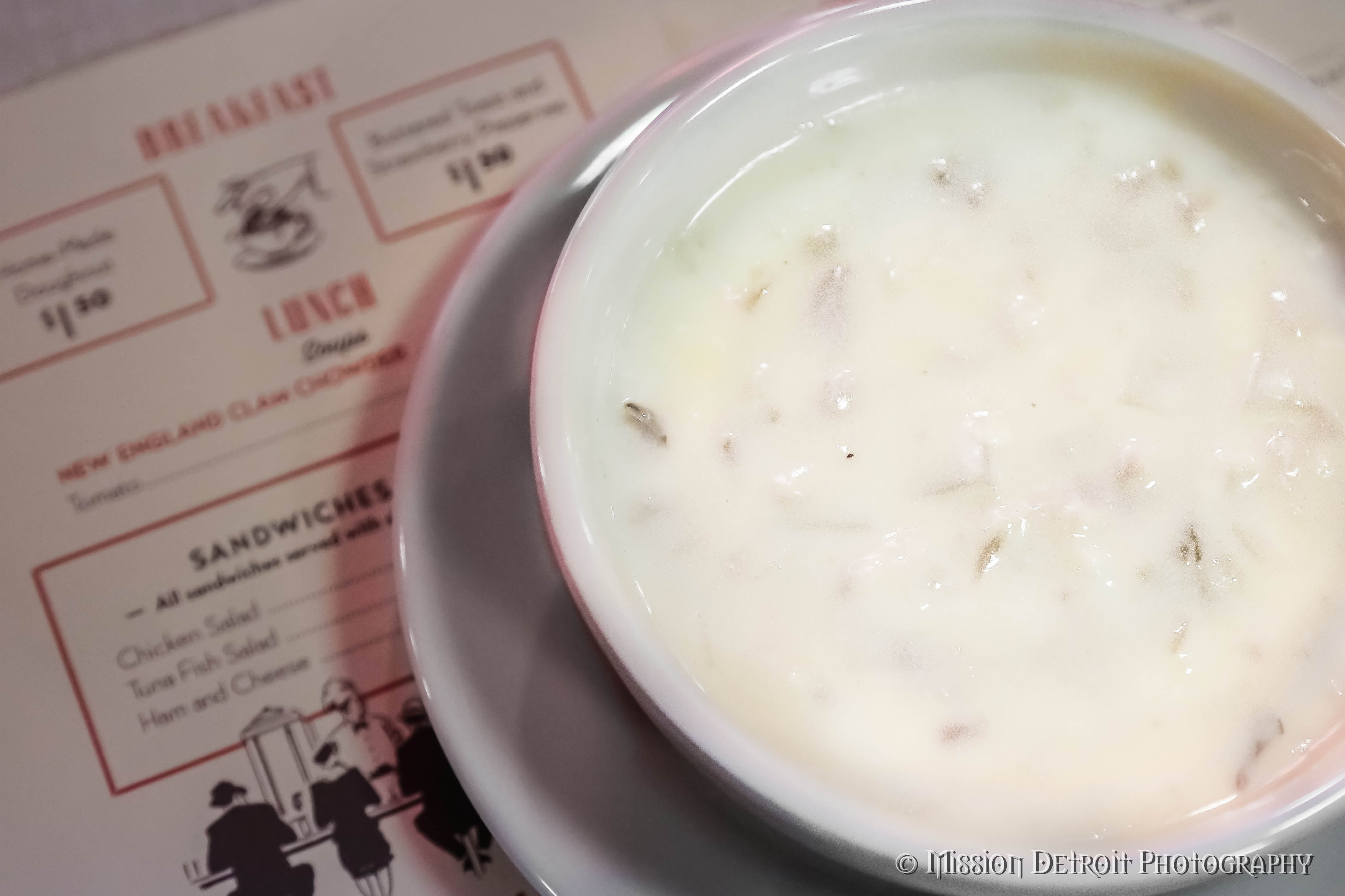 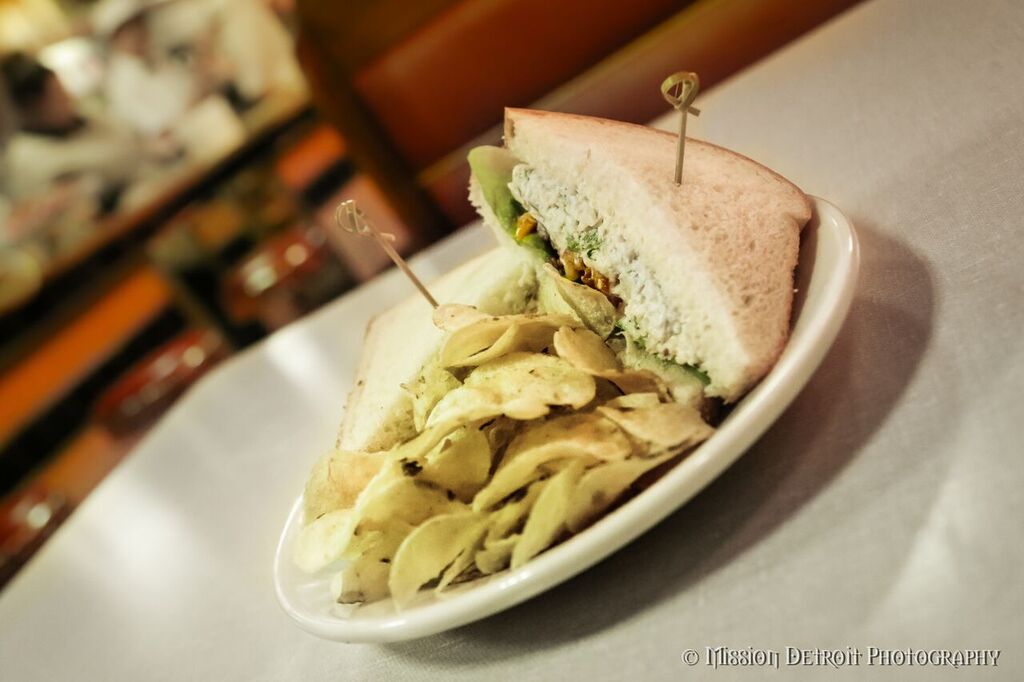 Chicken salad sandwich, using a recipe from the 1947 edition of the Boston Cooking School Cookbook, a pioneering cookbook that offered practical recipes for the average housewife. 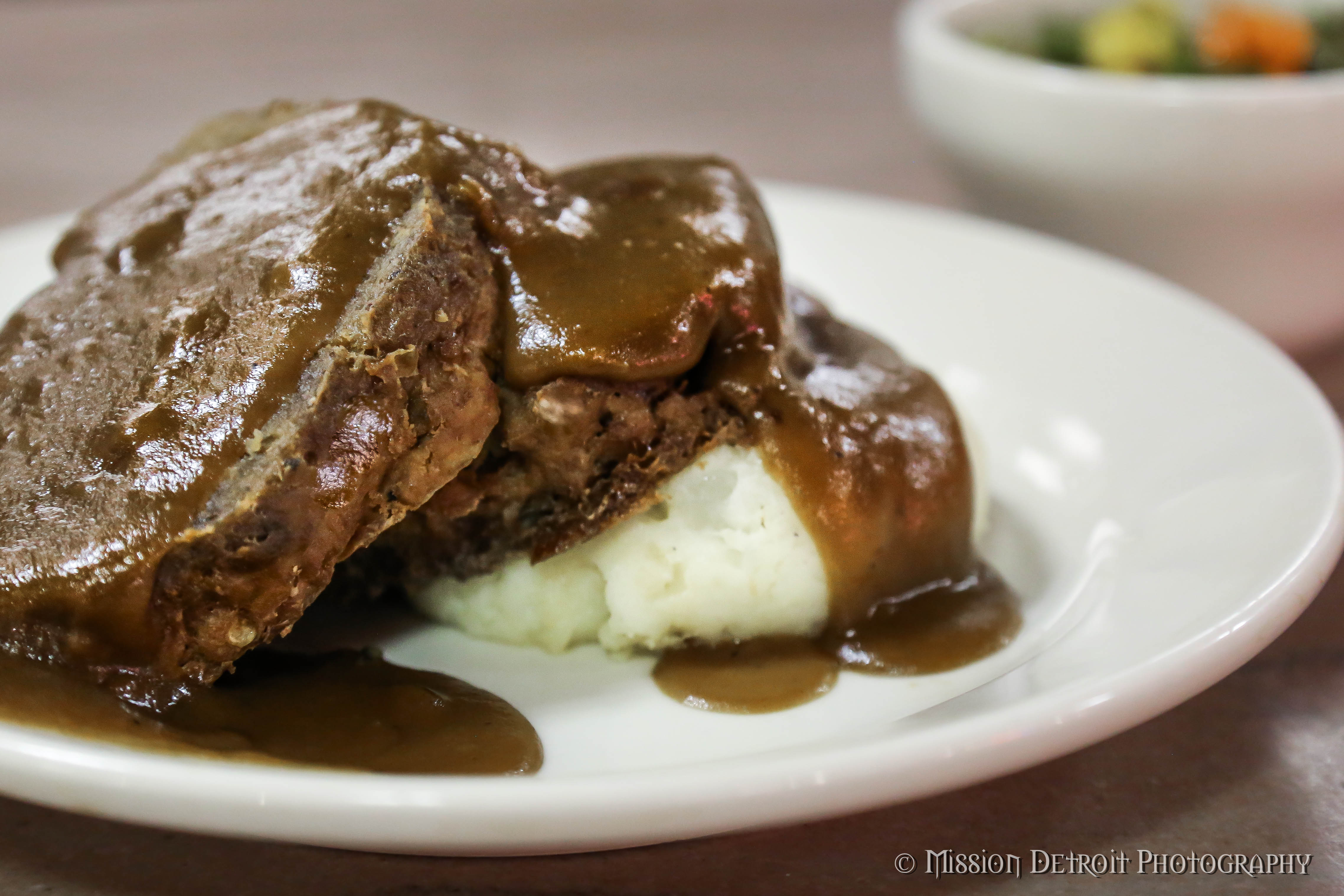 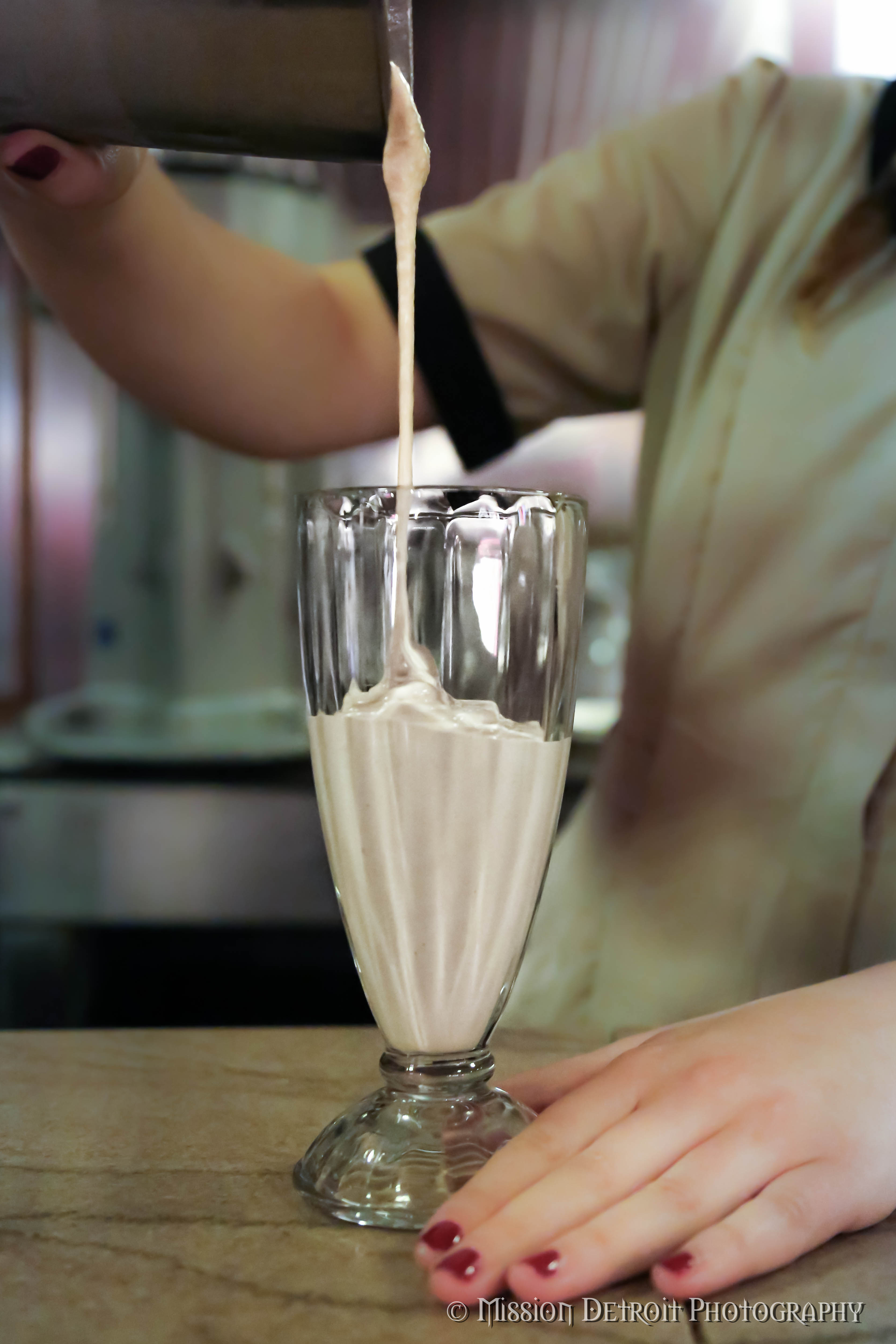 Milkshake, which in Massachusetts is a very refreshing drink made of milk, chocolate syrup, and sometimes crushed ice (no ice cream), shaken until it is creamy and frothy. 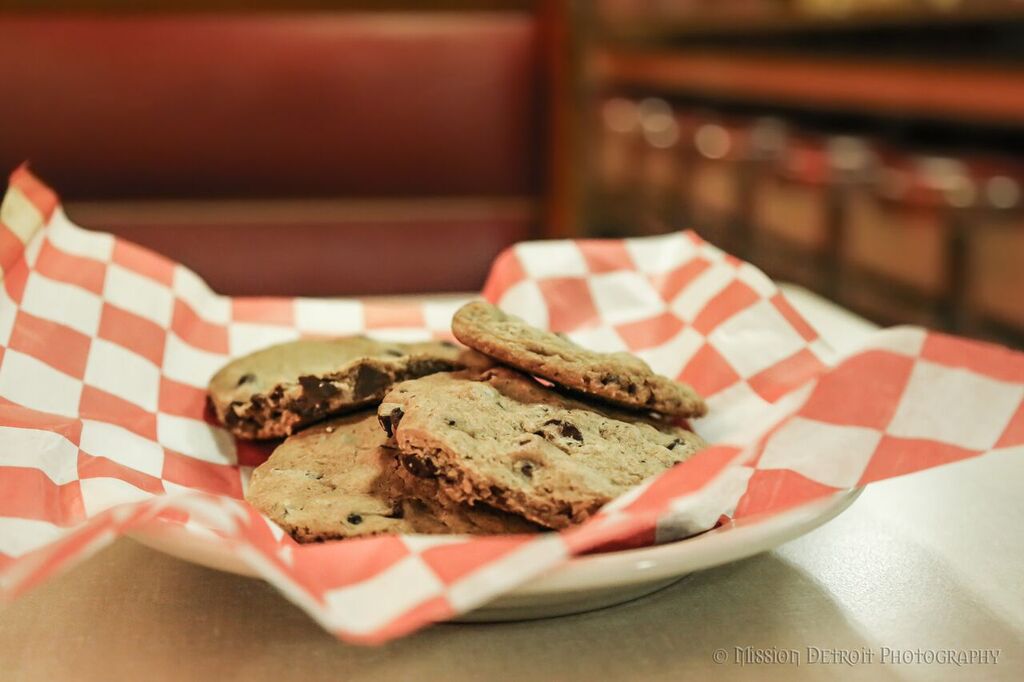 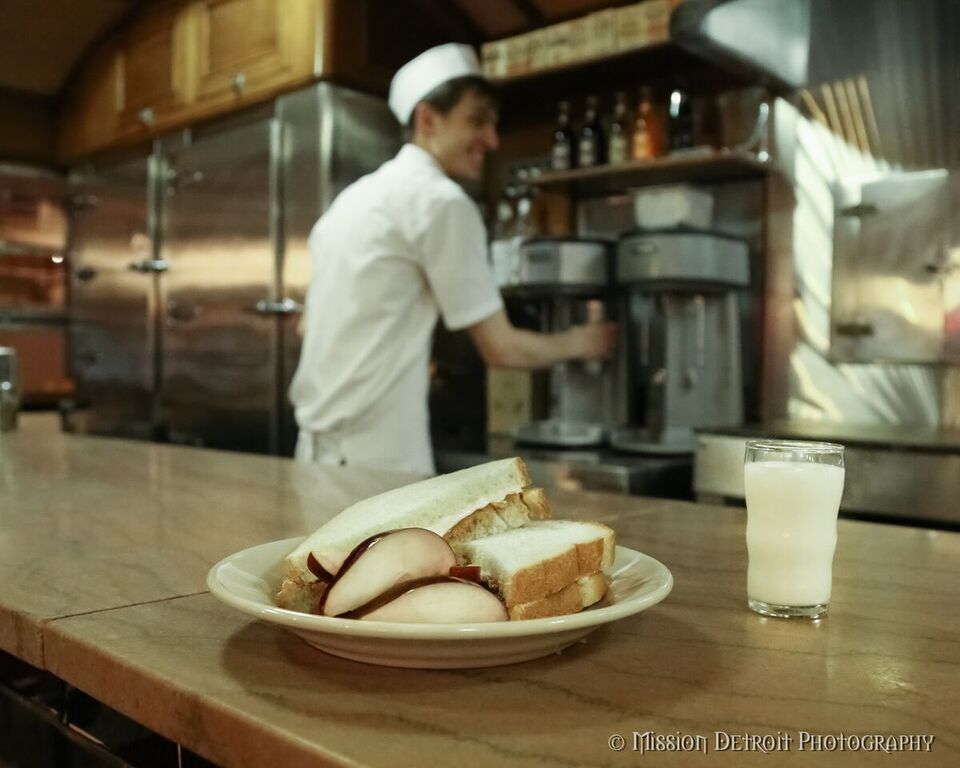 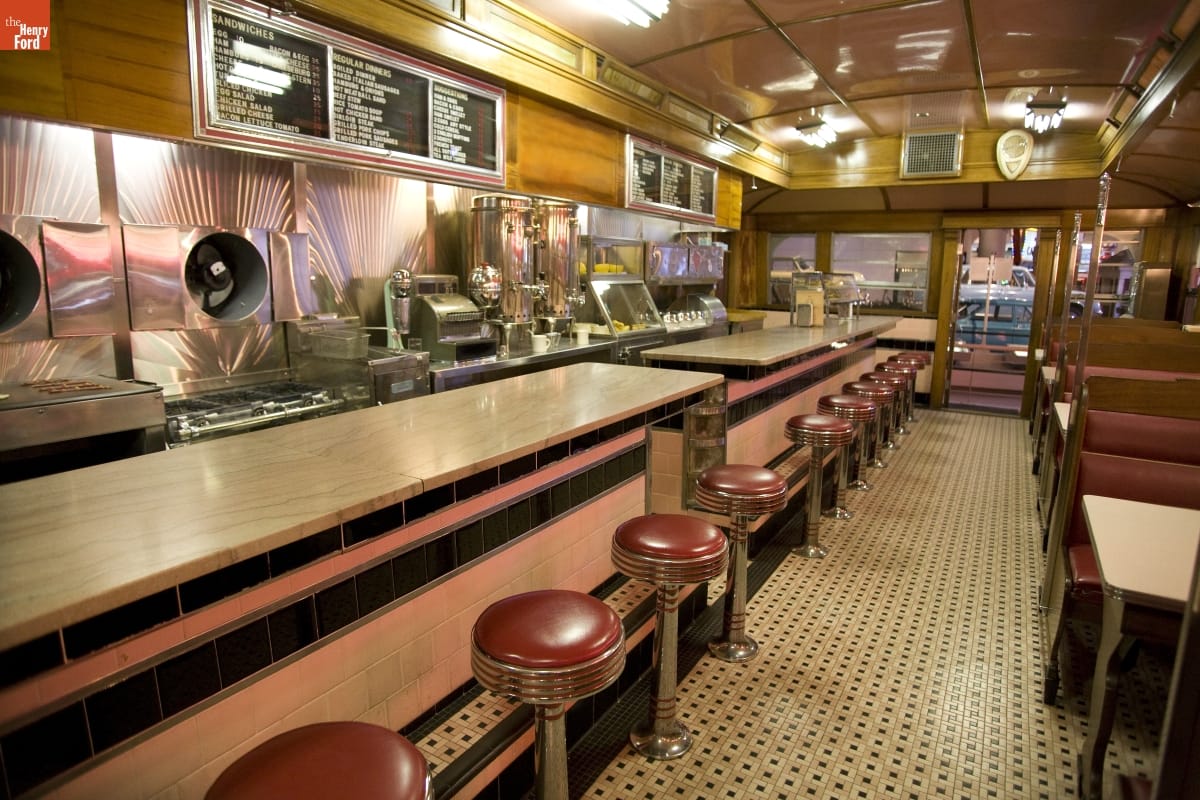 Prices are, by necessity, modern, but typical prices of the era can be found on the menu boards mounted up on the wall, based upon Lamy’s original menu and prices.

So, for a fun, immersive, and delicious experience, check out the makeover at Lamy’s Diner!

In Other Food News...
A Taste of History: Now featuring recipes and menu items guests might see prepared in Greenfield Village historical structures, such as Firestone Farm and Daggett Farmhouse.

Mrs. Fisher's Southern Cooking: The menu is based solely on Mrs. Fisher's 1881 cookbook or authentic recipes.

American Doghouse: New regional hot dog options are available, from the Detroit Coney and Chicago dogs to the California dog wrapped in bacon and avocado, tomato and arugula.

Donna R. Braden, Senior Curator and Curator of Public Life at The Henry Ford and author of this blog post, has decided that her new favorite drink is the refreshing Massachusetts version (without ice cream) of the chocolate milkshake. She thanks Richard Gutman and Lee Ward for their enthusiasm and support in making this makeover possible.