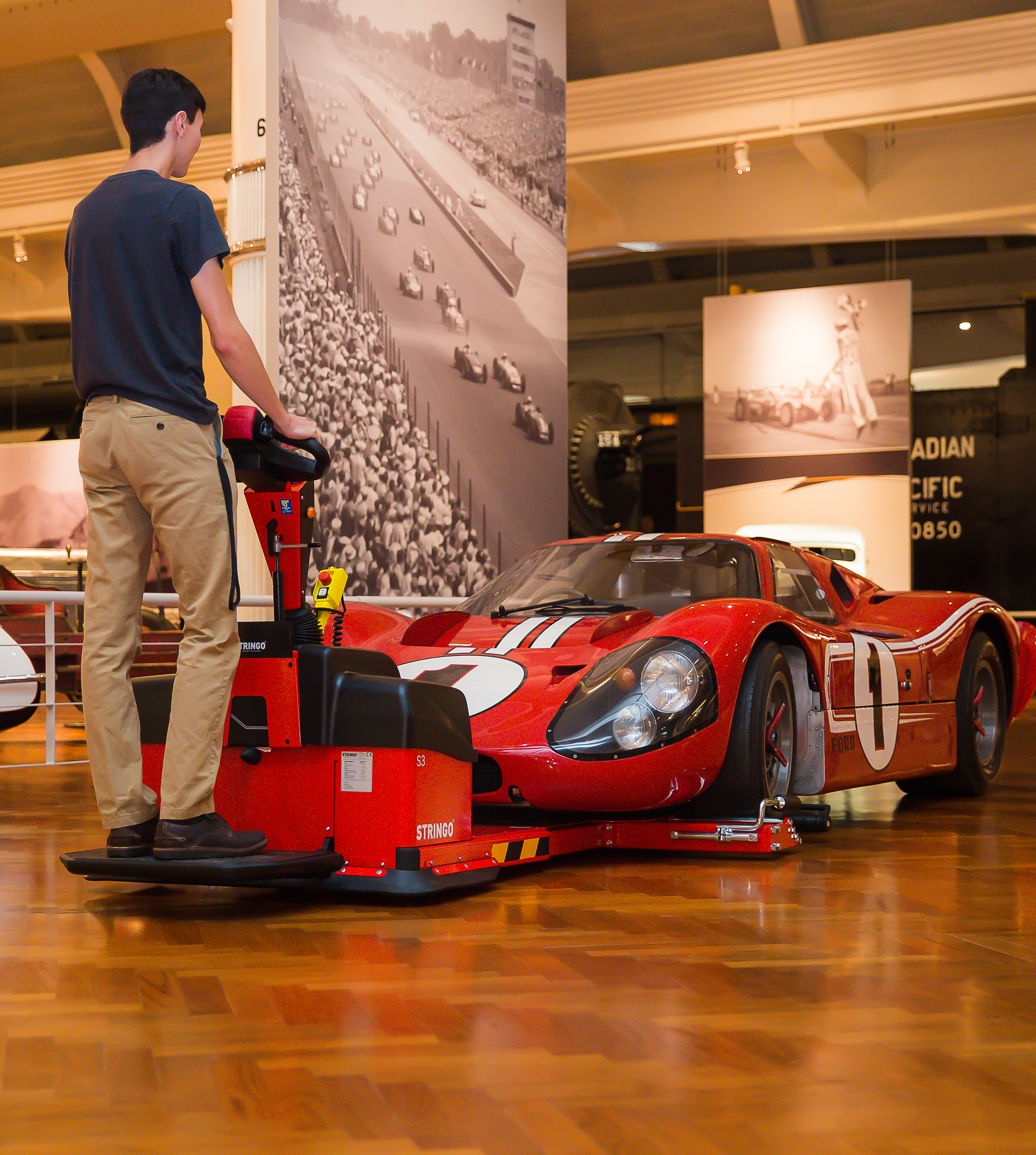 The original paint surface on the 1967 Ford Mark IV race car is very unstable. The Stringo helps us move the car with minimal handling.

Moving cars can seem like a no-brainer – they are designed to move, and they are at the core of our modern understanding of mobility. Much of our modern infrastructure, from roads and bridges to GPS satellites, is designed around getting cars to move from place to place quickly and efficiently. Cars that drive themselves seems a likelihood that is just around the corner.

So moving cars that are part of museum collections shouldn’t be a big deal, should it? Well, you’d be surprised.

The Henry Ford has over 250 cars, trucks, and other motorized vehicles in its collection, and each presents its own special set of problems when it comes moving them. To start, we keep only a handful of cars operational at any one time, and even those that are operational can’t be run indoors. So we have to push cars, which has the effect of making every little detail about the cars a big deal.

Do the tires hold air? Do the wheels roll? Do the brakes work? Does the transmission and drivetrain move freely, or is the engine stuck in gear? What kind of transmission does it have? How heavy is the car? Is it gas, electric or steam powered? Does the car need electric power to release the steering or move the transmission? What parts of the car body can be touched? Is the paint stable or flaking; is it original or was the vehicle repainted? Is the interior original or replaced? Can you sit on the seats or hold the steering wheel? All of these questions and more go into our decisions about how were go about moving one of our historic vehicles.

We make use of a variety of tools to help us move cars: dollies, rolling service jacks, Go-Jaks ®, flat carts or rolling platforms, slings, and forklifts. Some cars are easy, and move into place with one person steering and a few pushing. We use dollies or rolling jacks to move the car in tight quarters, or if the wheels don’t roll properly. Other cars are more problematic – we’ve even removed body sections of cars with fragile paint, to avoid having to push on those surfaces. Others have fragile tires which can’t even support the weight of the car. Moving a car like that is more like moving a large sculpture than a vehicle.

Recently, we’ve added a new tool to our car-moving toolbox. Thanks to a generous gift from the manufacturer, we’ve acquired a Stringo ® vehicle mover. It’s a bit like an electric pallet jack for cars – it picks up and secures two wheels of a car and then pulls or pushes the car where ever it needs to go. We can make car moves now with just one or two people, instead of as many as six, and can do it almost without touching the car at all. 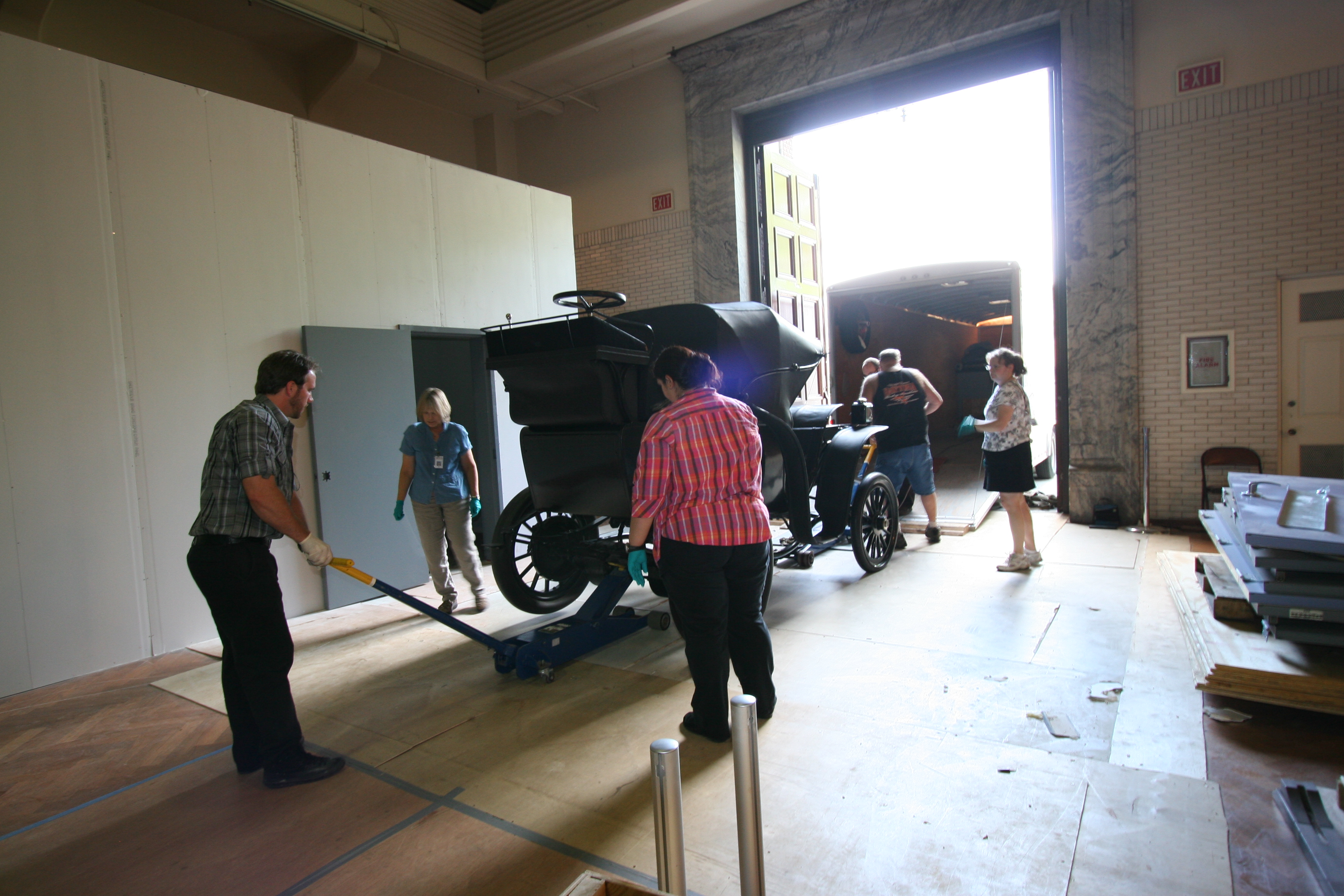 We moved this 1901 Columbia Electric Victoria on floor jacks. The tires were old and brittle, so they rolled poorly. 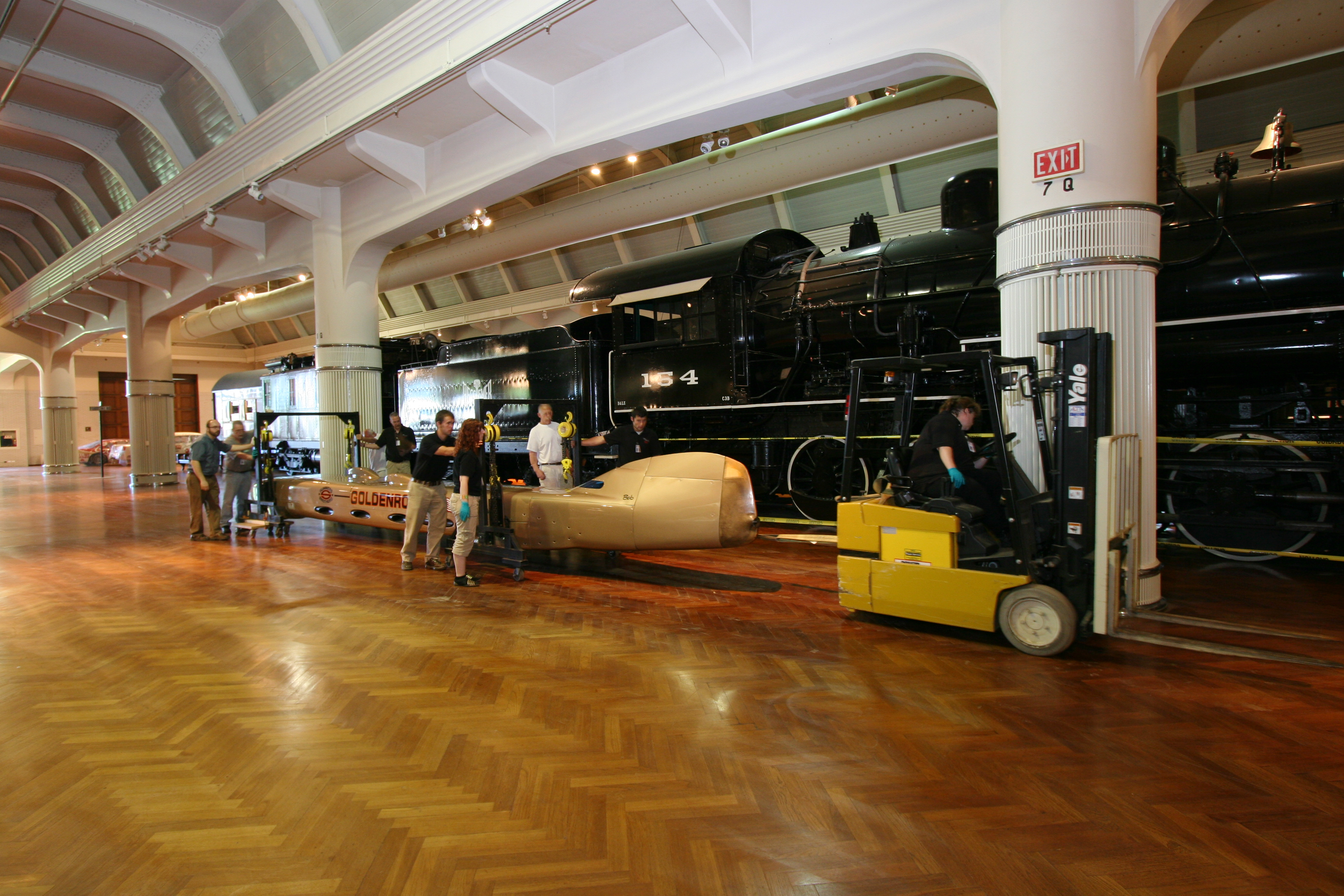 The Goldenrod, a 1965 land speed racer, had its own set of rolling gantries for moving. 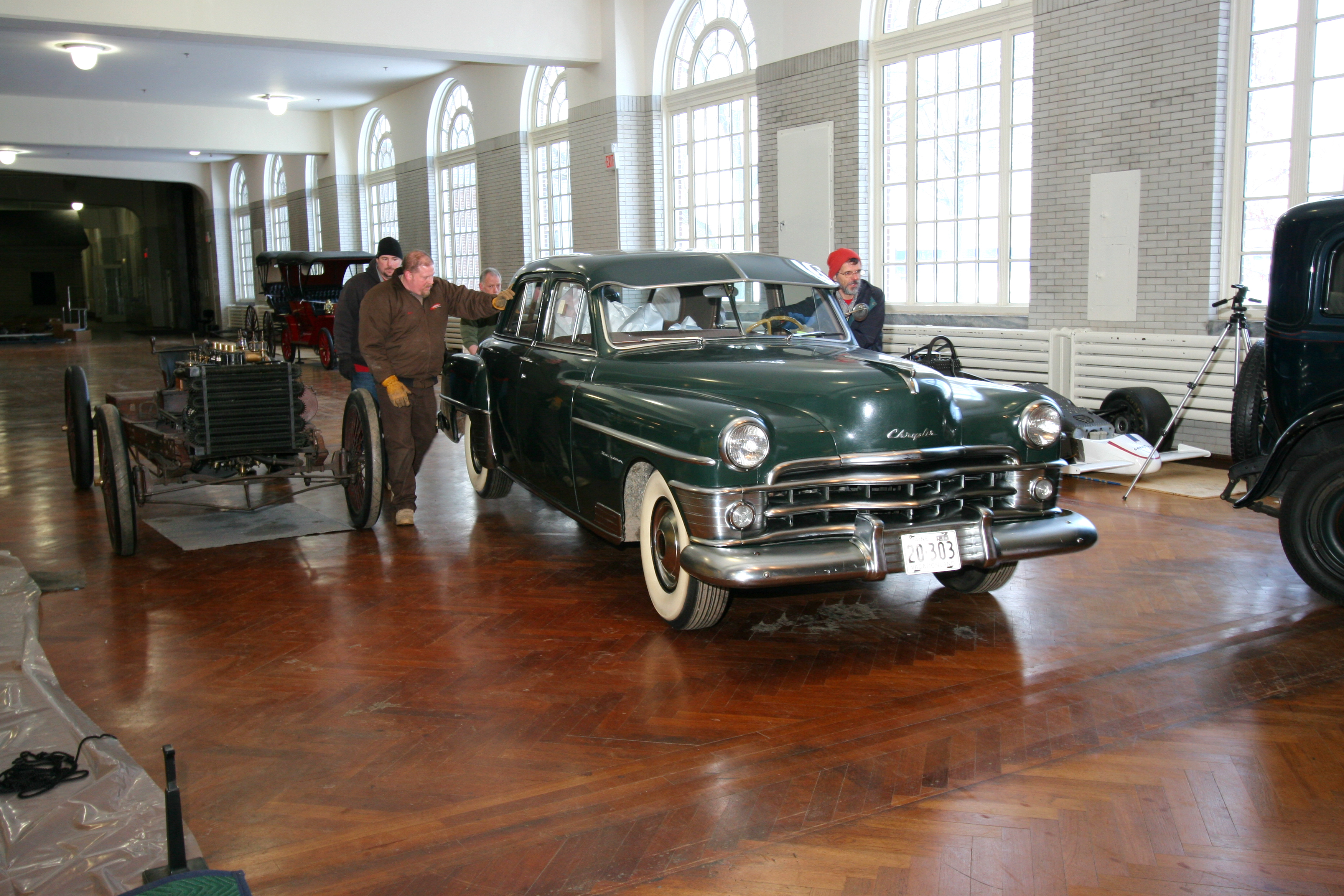 This 1950 Chrysler New Yorker can roll on its own tires. 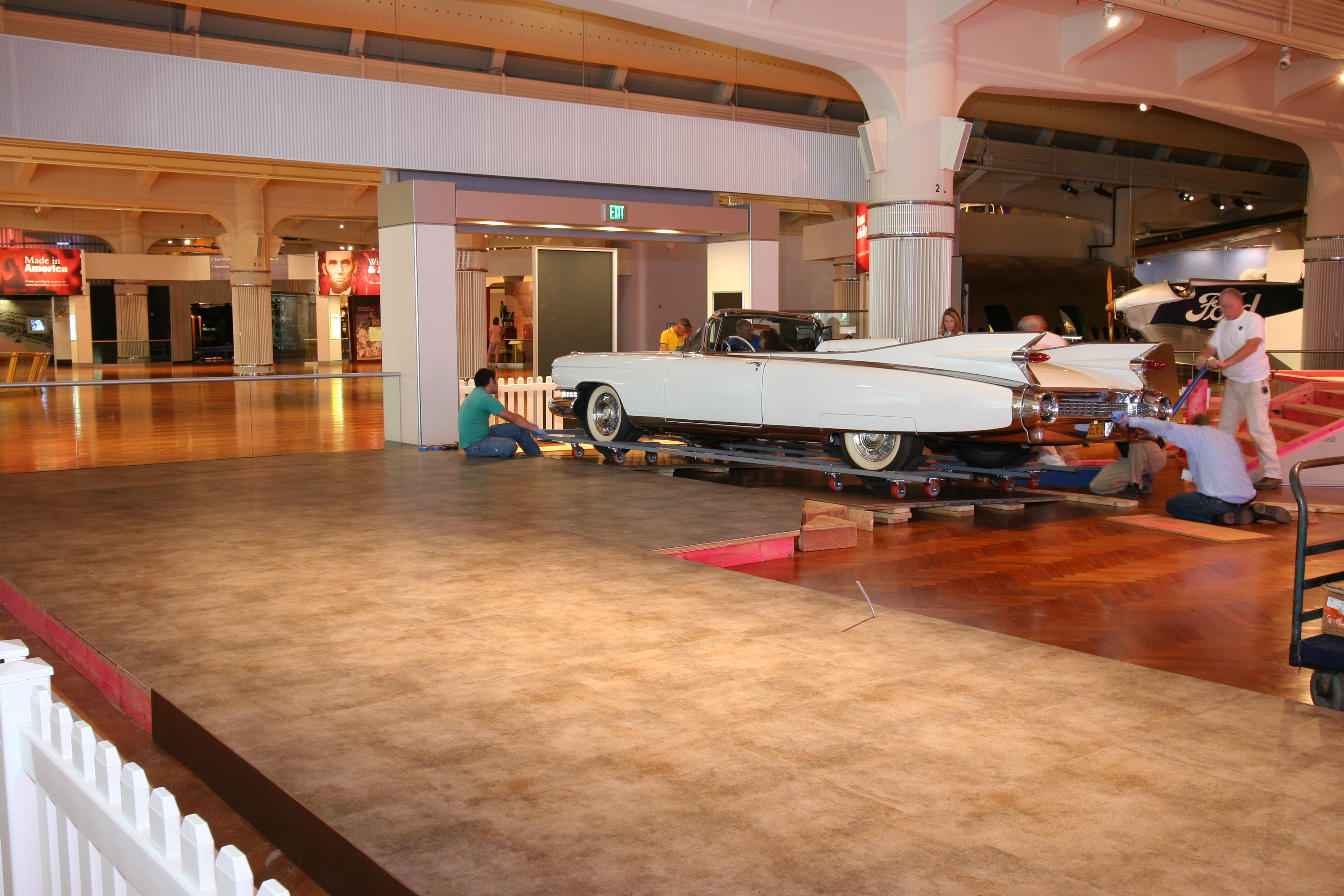 To get this 1959 Cadillac up onto an exhibition platform, we needed to get it on dollies, and roll it up a ramp. 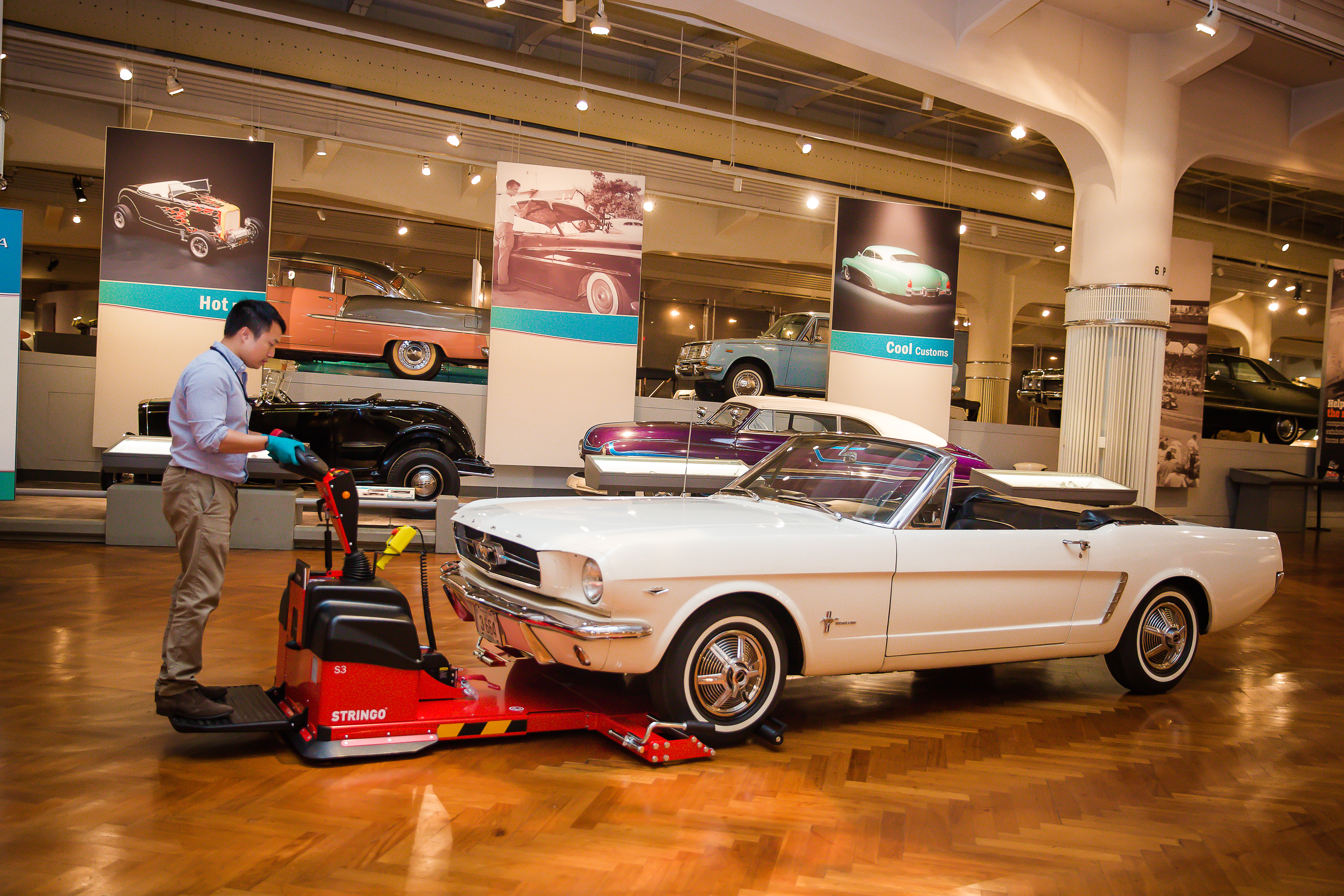 Our Stringo captures the front wheels of the 1964 Mustang and moves it, so a car can be moved by one person.

With hundreds of car moves ahead of us in the not-too-distant future, we are looking forward to making good use of our new Stringo ®.

philanthropy, cars, by Jim McCabe, collections care, #Behind The Scenes @ The Henry Ford