A perfectly ripe tomato is a classic summer joy. But did you know that the growing of tomatoes has ties to many aspects of our history and culture? Curator of Agriculture and the Environment Debra Reid uses our collections to reveal the many facets of the tomato.

The tomato -- a little fruit -- has big lessons to teach.

First, yes, that’s right. Tomatoes are, biologically, a fruit – a berry that matures on a flowering plant. As this circa 1915 stereograph explains, “at first they were only small green things that grew where the blossoms dropped off.” Yet, the small green fruit grew into a plump, juicy “culinary vegetable,” considered such because of its low sugar content. (For example, processors transformed the fruit into a spicy vegetable sauce – catsup! – the savory contrast to sweet fruit sauces like apple butter.)

The image above shows a boy named Bob and his two sisters amidst the tomato plants they raised from seed, proudly displaying plants loaded with fruit. The Keystone View Company included an educational message on the back of the stereograph to engage children with growing fruits and vegetables. Bob and his sisters planned to share their finest tomatoes with others during their school garden show. They became role models for other students sprouting seeds and planting seedlings and then weeding and watering their crops.

By growing tomatoes, these children learned about domestication, the process by which humans select seed from bigger or tastier fruits or from plants that survive a disease or a drought. They cultivate these seeds (planting, weeding, harvesting, saving seed, and replanting year after year). This results in cultivars, each with different shapes, textures, colors, flavors. Over generations, humans have created more than 10,000 tomato cultivates by saving seed from their best tomatoes.

Why do tomatoes come in so many different shapes, sizes and colors? Tomatoes in the background and white eggplant in the foreground of the wheelbarrow. Photograph by Debra Reid, taken Saturday, August 15, 2020, at the kitchen garden at Firestone Farm.

Evolution resulted in distinctive varieties, but humans have also picked good-tasting fruits to propagate. (See how many different cultivars this proud gardener grew in the mid-1940s!)

As demand for quality seeds grew during the second half of the 19th century, commercial seed businesses flourished. Companies such as Hiram Sibley & Co. contracted with growers to produce seed in clearly marked packages for customers to purchase. In addition to illustrations of the cultivar, the packet included descriptions of the qualities of the fruit, as well as best practices of cultivation (often in more than one language).

Noted plant breeder Luther Burbank (1849–1926) crossed varieties to create hybrid cultivars that did not exist in nature. He sought disease resistance as well as a meaty tomato that had more pulp than seed – the meatier the tomato, the heartier the sauce! Some of Burbank’s varieties are still sold today.

Twentieth-century concerns about food quality and nutrition led to the popularity of seeds like “Double Rich,” which were certified organic and yielded tomatoes with twice the Vitamin C!

You can learn more about organic cultivation and its relationship to the plant breeding process from the U.S Department of Agriculture’s (USDA) Organic Integrity Database, and about biotechnology, including hybridization, from this USDA glossary.

Have you ever wondered who grows the tomatoes sold in cans or bottles? 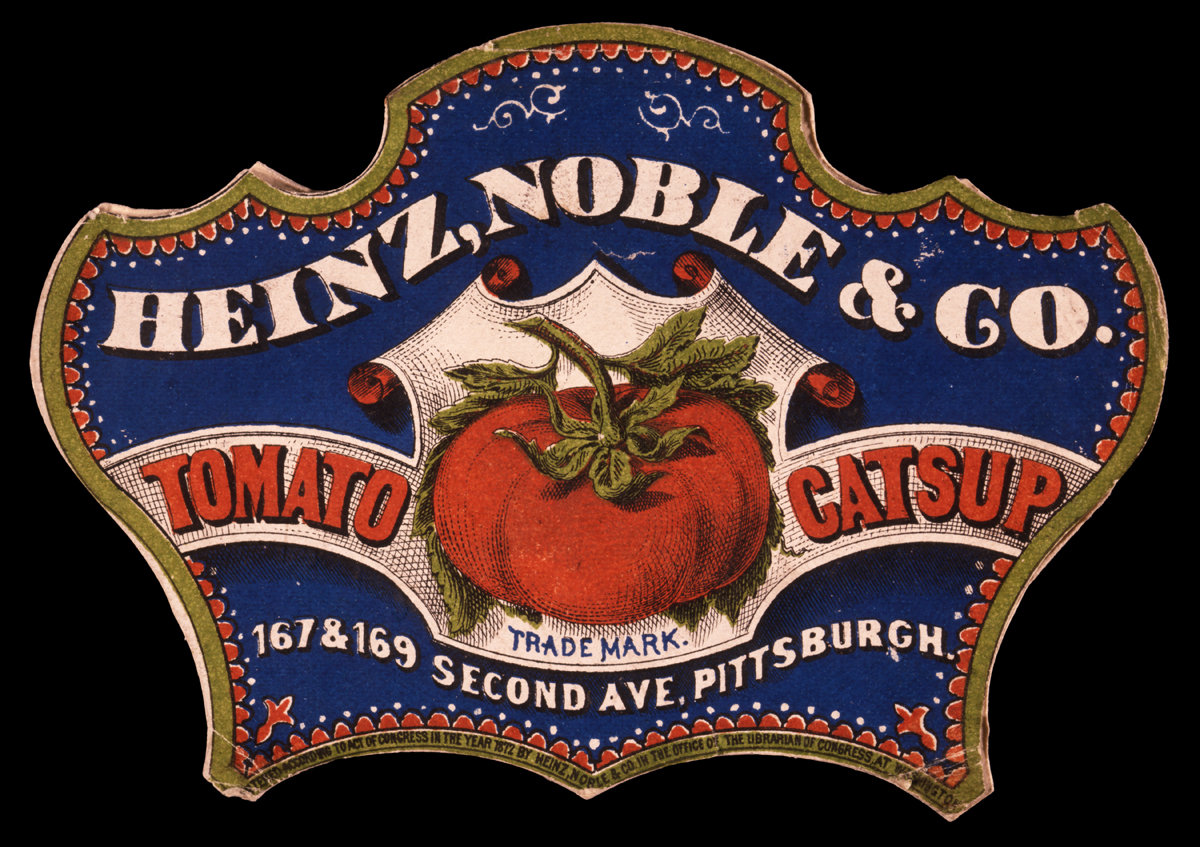 Anyone with yard space enough can grow tomatoes. Yet, by the time home gardeners like Bob and his sisters planted their crop in the early 20th century, many urban Americans wondered what a vine-ripened tomato tasted like. Why? Because tomatoes could be easily processed into affordable packaged products, and most urban consumers paid clerks in general stores to pick tomatoes off the canned goods shelf. Companies like the H. J. Heinz Company contracted with farmers to meet the demand for canned goods and catsup. Their production far exceeded the yields of home gardens. Heinz ensured success by growing seed tomatoes from which the best seeds became the basis for the next year’s crop. The company maintained a network of greenhouses to start the plants that growers put in the ground.

A rapid, careful and organized tomato harvest and transport led to high-quality processed foods. A sense of urgency dictated the harvest season, which began with careful picking and packing of the delicate and perishable fruit in special crates and baskets. It continued as laborers moved the full containers from fields to shipping points. Specially designed wagons and baskets reduced stress on the ripe fruit during transit. Only the best tomatoes made the journey to H.J. Heinz plants. Laborers discarded damaged fruit into barrels and packed others into baskets for shipment. 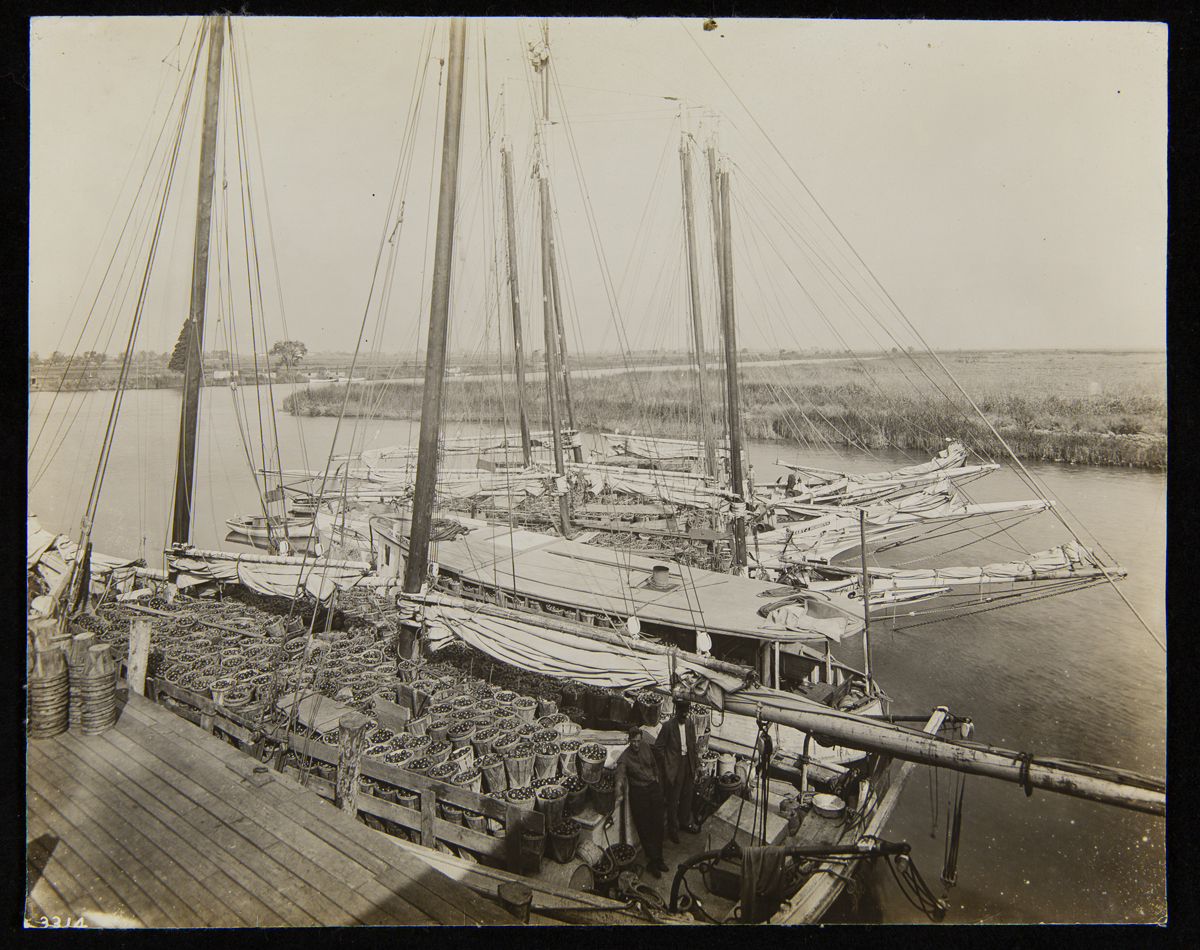 Transporting tomatoes from truck farms to Heinz processing plants sometimes involved sailing vessels loaded with ripe fruit. At the height of harvest, barges carried loads of tomatoes from farms to processors. Growers in Salem, New Jersey, used the Salem River, a tributary to the Delaware River, to send crops to processing centers near large east coast markets, including Philadelphia and New York.

Mass production of tomatoes did not make home gardening obsolete. In fact, times of economic hardship increased the general public’s interest in growing their own tomatoes. During the Great Depression, Henry Ford dedicated 1,500 acres of Ford Farms land (between Birmingham and Flat Rock, Michigan) to vegetable gardens. Ford Motor Company employees could sign up to tend a garden plot and retain the produce. Interest in growing tomatoes remained high during World War II, largely through the U.S. government’s Victory Garden program.

Home-grown tomatoes could even be symbols of resistance. George W. Carver encouraged farm families to grow tomatoes for the table as a strategy to strengthen their position, economically and socially. 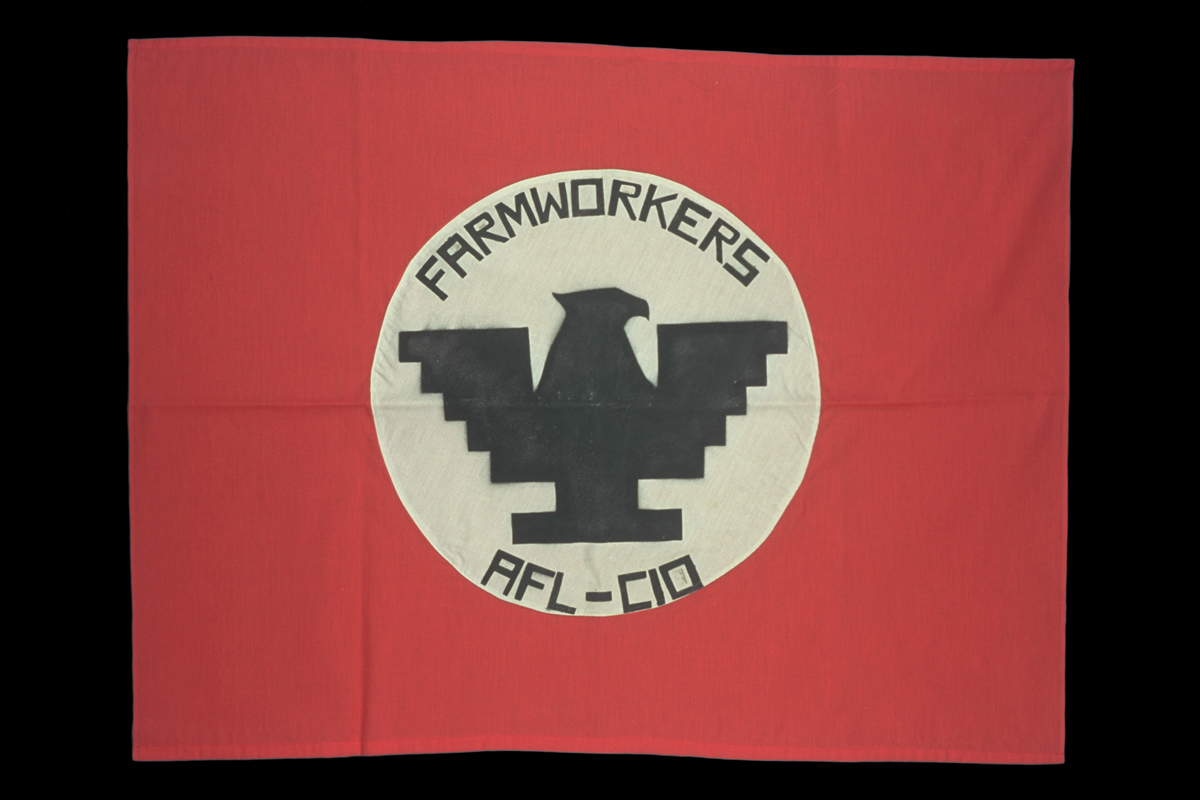 Tomatoes have been at the heart of economic conflict between growers and laborers. California growers produced 85 percent of tomatoes canned in the United States by 1940. The larger the fields, the more urgent the need for laborers to harvest a crop that quickly moves from maturity to rot.

Most large-scale growers relied on migrant agricultural laborers at harvest time. They worked for wages determined by the grower and did not receive protection under legislation passed during the New Deal that established minimum wage, maximum hours and workers’ compensation. Instead, growers had legal protection to hire agricultural laborers for wages below the legal minimum and were exempt from compliance with maximum hour and overtime regulations. This meant that laborers had to work until the perishable crop was completely harvested.

Edward R. Murrow’s 1960 news report, Harvest of Shame, increased attention to the plight of U.S. agricultural laborers along the East Coast. Then, in 1965, Filipino-American laborers, members of the Agricultural Workers Organizing Committee, launched a strike to protest pay and working conditions. Latino pickers, members of the United Farm Workers Association, joined with them, and began a five-year strike in and around the grape fields of Delano, California. Consumers increasingly sympathized with the laborers on whom growers of other perishable crops depended. 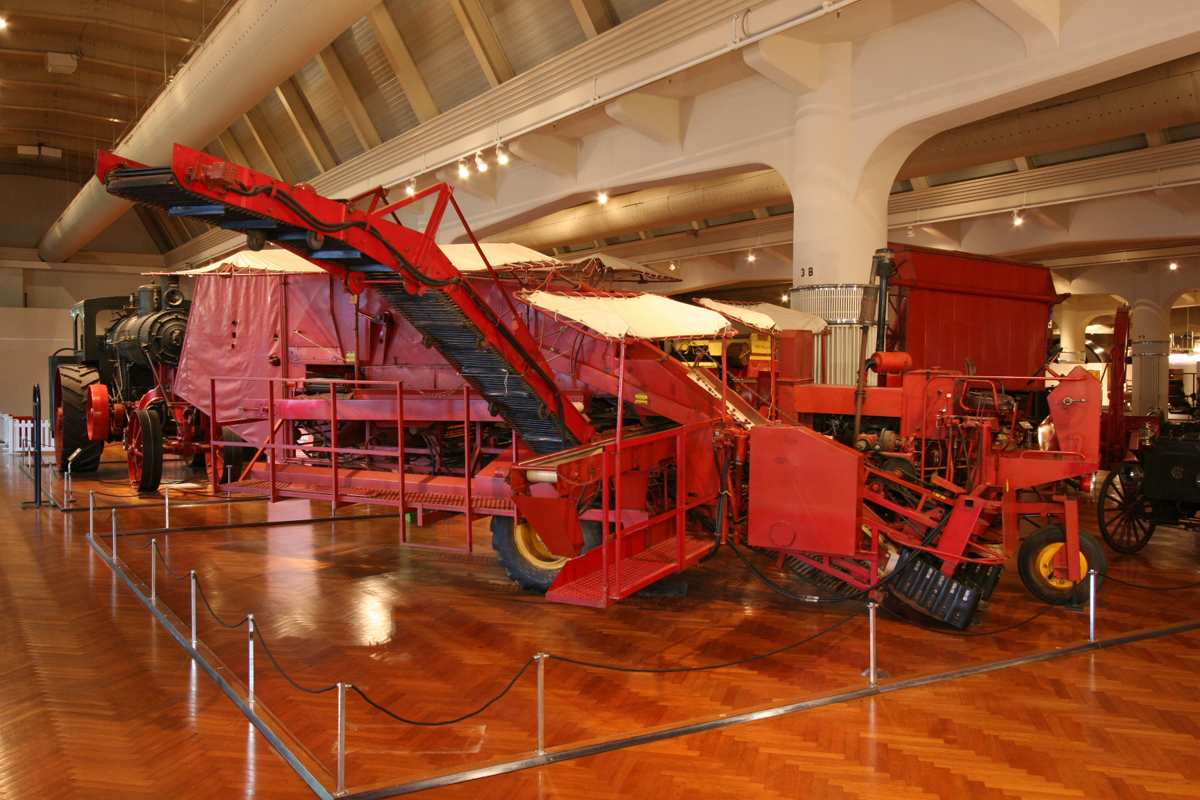 Mechanical tomato harvesters became commercially viable in the context of this successful strike. When the FMC Corporation introduced its Cascade Tomato Harvester, Model 69W, in 1969, it advertised the machine as the savior of a multi-million-dollar crop and the preserver of the American people’s eating habits. The machine did not eliminate humans from the picking process, but it sped it up. FMC explained that it “picks a crop at the rate of nine tons per hour and cuts the cost of handpicking by 40 to 50 per cent.” Crews who operated the machine included a driver, a mechanic, and ten to twelve individuals who rode on the machine and removed debris from the picked tomatoes. This machine carried crews through midwestern fields, last on a farm near Grant Park, Illinois, between 1983 and 1990, which produced for the Heinz catsup factory in Muscatine, Iowa.

Changing harvesting practices required changing the form of tomatoes, too. Mechanical engineers believed the shape of San Marzano tomatoes would suit harvester belts. Plant breeders spent 30 years cross-pollinating tomatoes (including the San Marzano) to create a new hybrid that tolerated mechanical harvesting. In addition to uniform size and firmness, the fruits had to all mature at the same time on one plant, and they had to come off the vine easily.

Could scientists really slow the aging process? Microbiologists at Calgene, Inc. began research with that goal in mind in 1981. Their work paid off by 1988 with the “first commercially available genetically engineered whole food,” the Flavr Savr™ tomato. Genetic modification had shut down a protein that ripened fruit. It resulted in a tomato that could “last up to four weeks in a non-refrigerated state” (Martineau, pg. 4). An assessment of safety of the genetically modified tomato published in 1992 determined that the Flavr Savr™ remained a tomato and was food. (It bears mentioning that genetically modified tomatoes tend not to be listed in the Cultivated Plant Code because they derive from lines still being developed.) Page from Safety Assessment of Genetically Engineered Fruits and Vegetables: A Case Study of the Flavr Savr™ Tomato from The Henry Ford's library.

Hungry for more on this little fruit with big impact? The Acme tomato in the Firestone Farm garden, August 21, 2018. Photograph by Debra A. Reid.

The Henry Ford has resources to help you explore the complete tomato trajectory to date.