On Your Way with Triple A 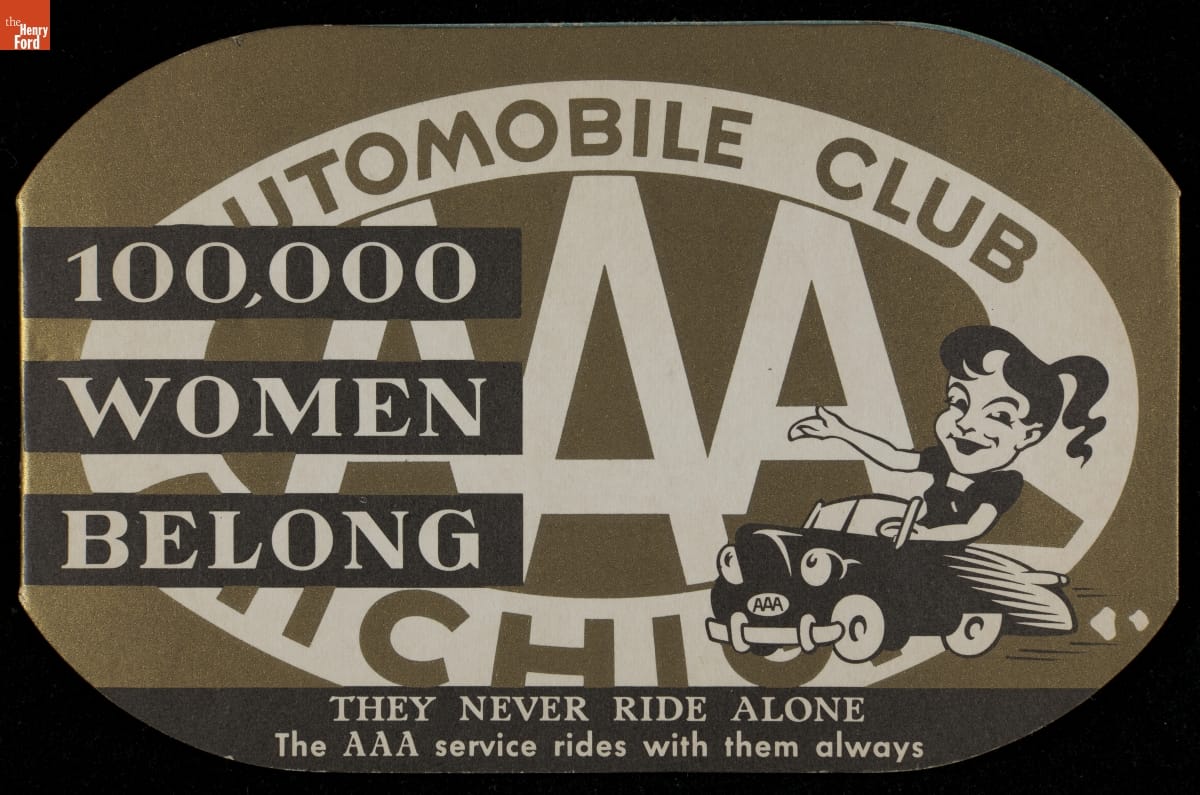 In 1902, nine regional automobile clubs joined together to create a national motoring organization called the American Automobile Association (AAA). Picking up where bicyclists had left off with their “Good Roads” movement in the 1890s, the earliest goal of AAA was to lobby for road improvements. Since then, AAA has devoted itself to all matters that concern American motorists—including driver safety, emergency services, and ensuring the best possible experiences for automobile travelers.

The Michigan chapter of the American Automobile Association formed in 1916 (see Curator Matt Anderson’s blog post celebrating its 100th anniversary last year). In the following blog post, we focus on the many unique and innovative contributions of AAA and AAA Michigan to improve the overall travel and vacation experience. Many of the items shown here are drawn from a rich collection of materials that was donated to The Henry Ford by AAA Michigan in 1987.

So, pack your bags, buckle your seat belts, and get ready for a road trip through time! 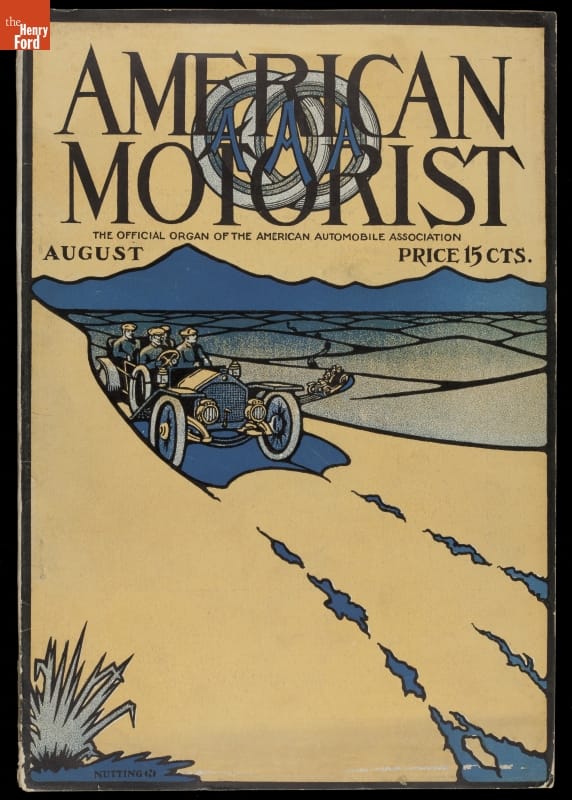 In 1909, AAA began publishing this magazine for motorists—offering travel tips, club news, and road improvement updates. The inaugural issue was in February of that year. 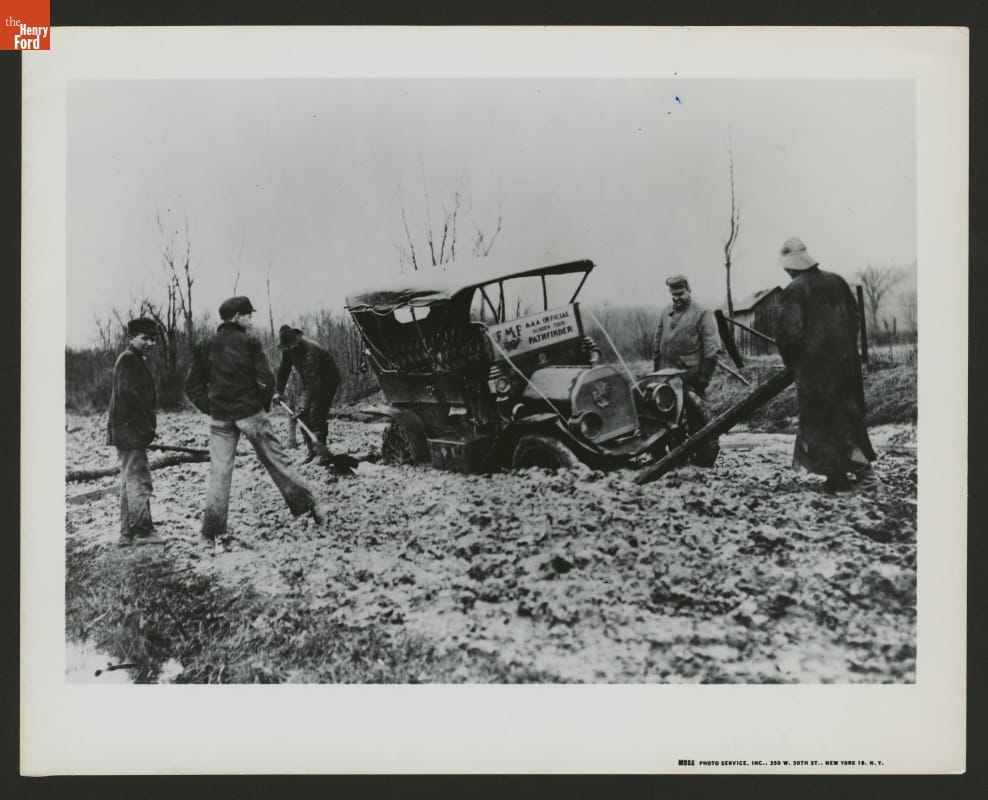 When AAA first formed, the annual Glidden Tour was conceived as a way to raise public consciousness about the poor condition of America’s roads. These tours were grueling, several-hundred-mile tests of automobile reliability and endurance. Cars often got stuck in the mud, as in this ca. 1910 photograph of a “pathfinder” car—that is, one that traveled the roads before the official tour, measuring their distances and noting their condition and surface quality. 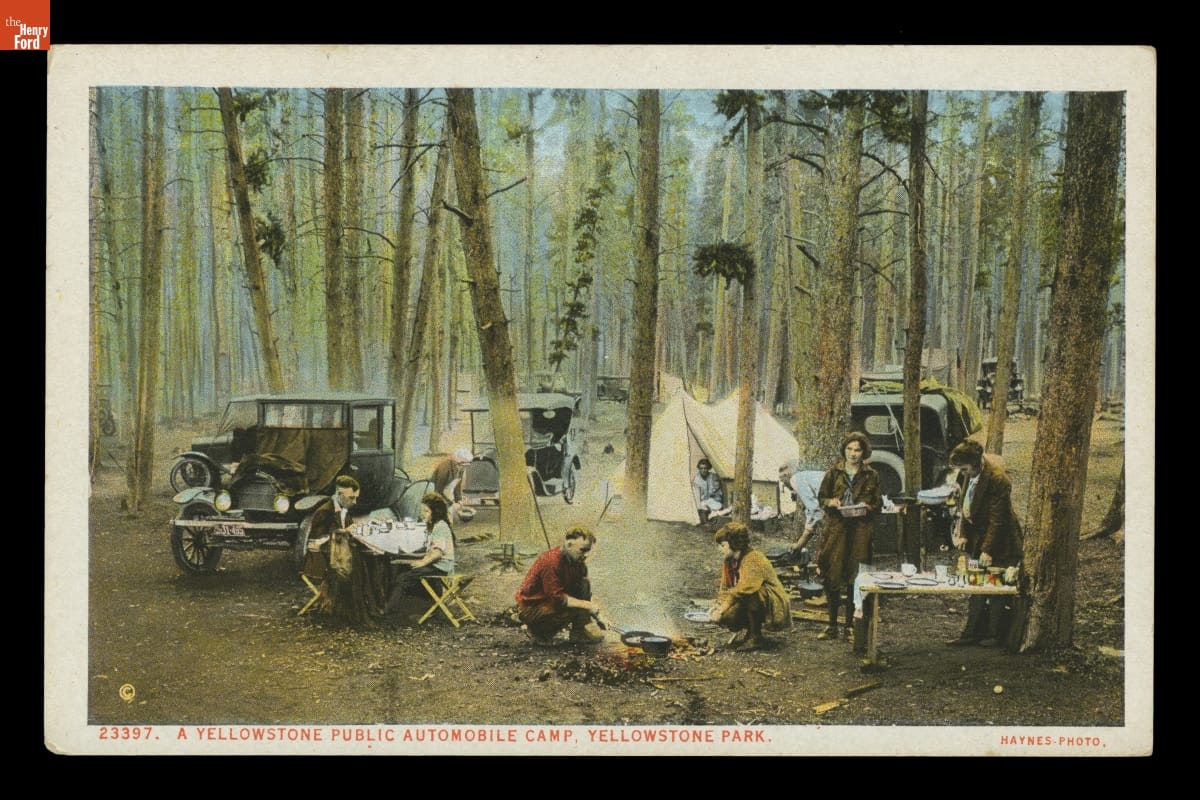 By 1915, AAA’s advocacy of better roads could be seen in improvements along both extended stretches of cross-country roads and better road surfaces within national parks.  By 1915, so many motorists stopped at Yellowstone National Park on their way to the Panama-Pacific Exposition in San Francisco, that automobiles were officially allowed entrance into the park for the first time. Motorists arrived at the park prepared to camp so public campgrounds were soon created to ensure safety, order, and control. (For more, see this post on automobiles and the national parks.)

AAA has long been known for its road maps. Roads were so poorly marked in the early years of motoring that maps had to include detailed written instructions or photographs of landmarks with arrows superimposed on them. As roads improved—and with the addition of identifiable highway names and numbers—road maps became easier to follow. This detailed 1934 book of maps to and from New York City came from the Lansing Branch of AAA Michigan. 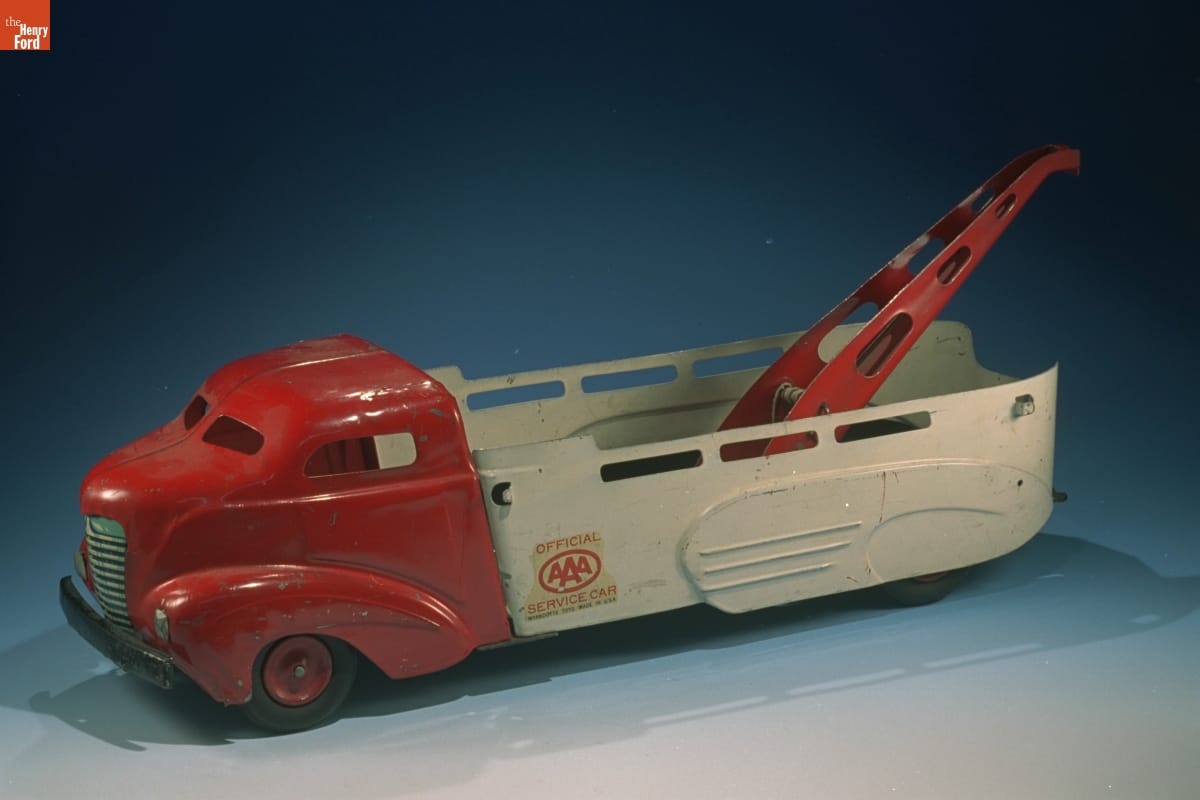 In 1915, the Automobile Club of Missouri offered the first emergency road service for its members. This idea caught on quickly, and it soon became a service offered by all AAA affiliates to its members. This toy tow truck, made by the Wyandotte (Michigan) Toy Company about 1940, proudly sports an American Automobile Association decal on its side. It may have been a promotional item for AAA. 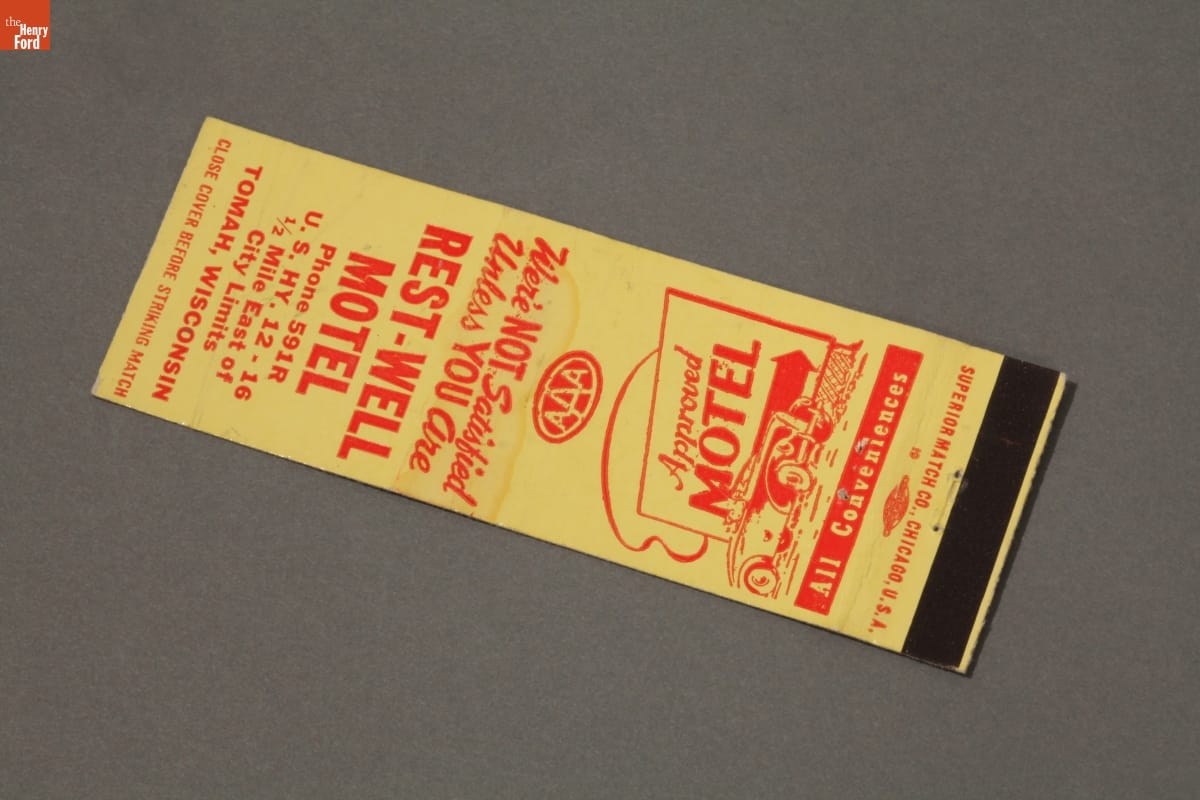 As the number of Mom-and-Pop motels increased after World War II, competition provided the impetus for motel owners to offer free giveaways as both souvenirs and easy advertising. This book of matches, which was probably neatly set in an ashtray in the motel room when the guest arrived, proudly indicates that the Rest-Well Motel, in western Wisconsin, was AAA-approved. 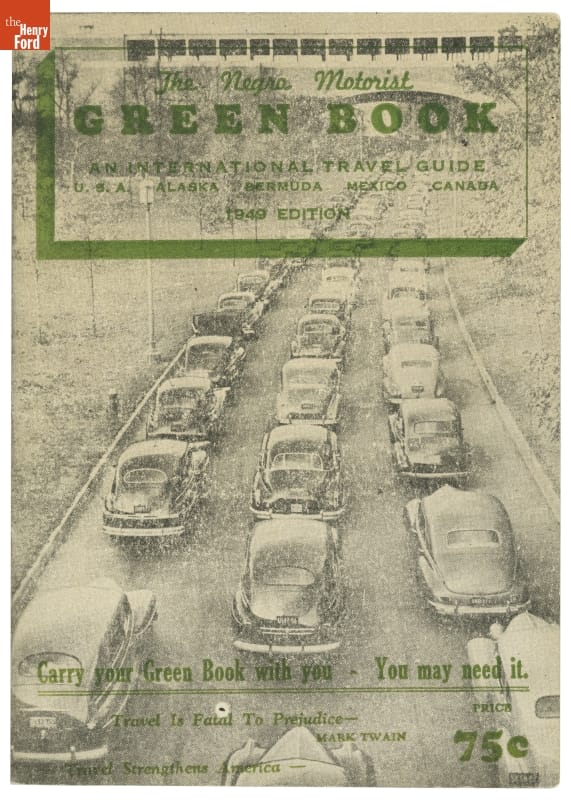 An intriguing item in The Henry Ford’s AAA Michigan collection is this 1949 “Negro Motorist Green Book.” The brainchild of black postal carrier Victor H. Green, this book contained listings of safe places (in both the South and the North) for African American motorists to stay, eat, and fill up with gas during the era of segregation. Green was passionate about distributing copies of the Green Book to places where African Americans were likely to encounter them, including AAA offices. See this post for more on “The Negro Motorist Green Book.” 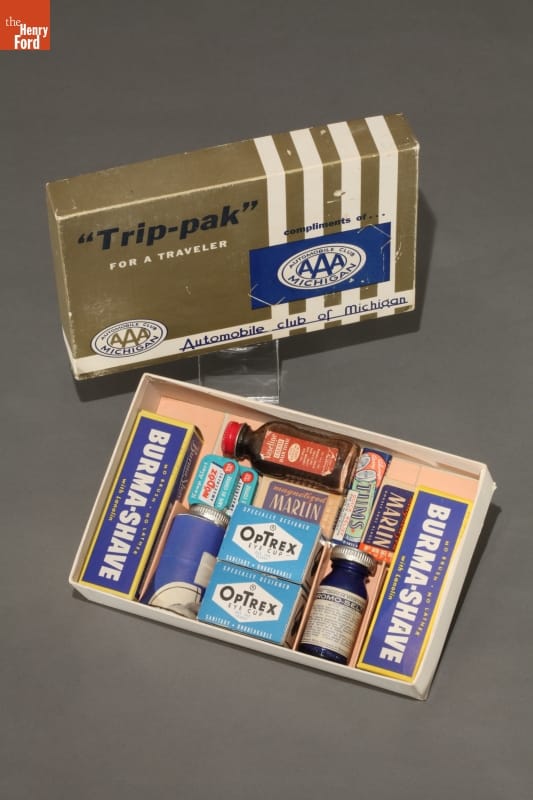 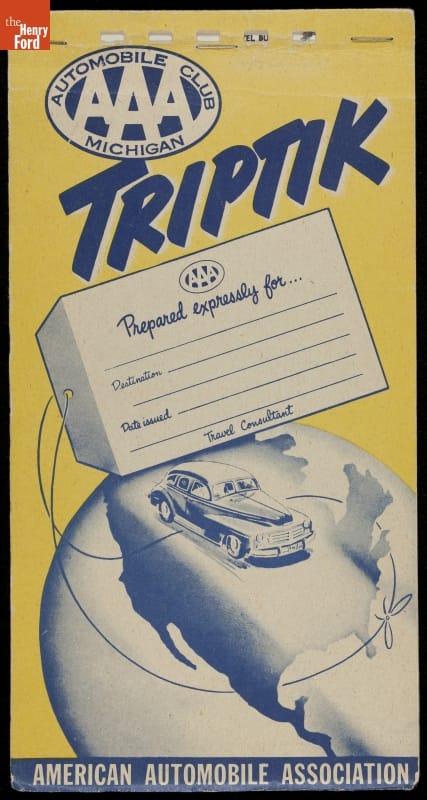 Those of us of a certain age fondly remember visiting the local AAA office before embarking on a long-distance vacation to pick up a TripTik. Before the days of MapQuest, GPS, and Google Maps, this was a collection of strip maps bound together in a spiral binding. Using a brightly colored marker, the knowledgeable AAA agent would map out the designated route—greatly alleviating our fears of getting lost in an unfamiliar setting. This TripTik, provided as a service to members of AAA Michigan, contains 14 separate strip map pages that mark out an early 1950s trip from Detroit to Lake Wales, Florida. 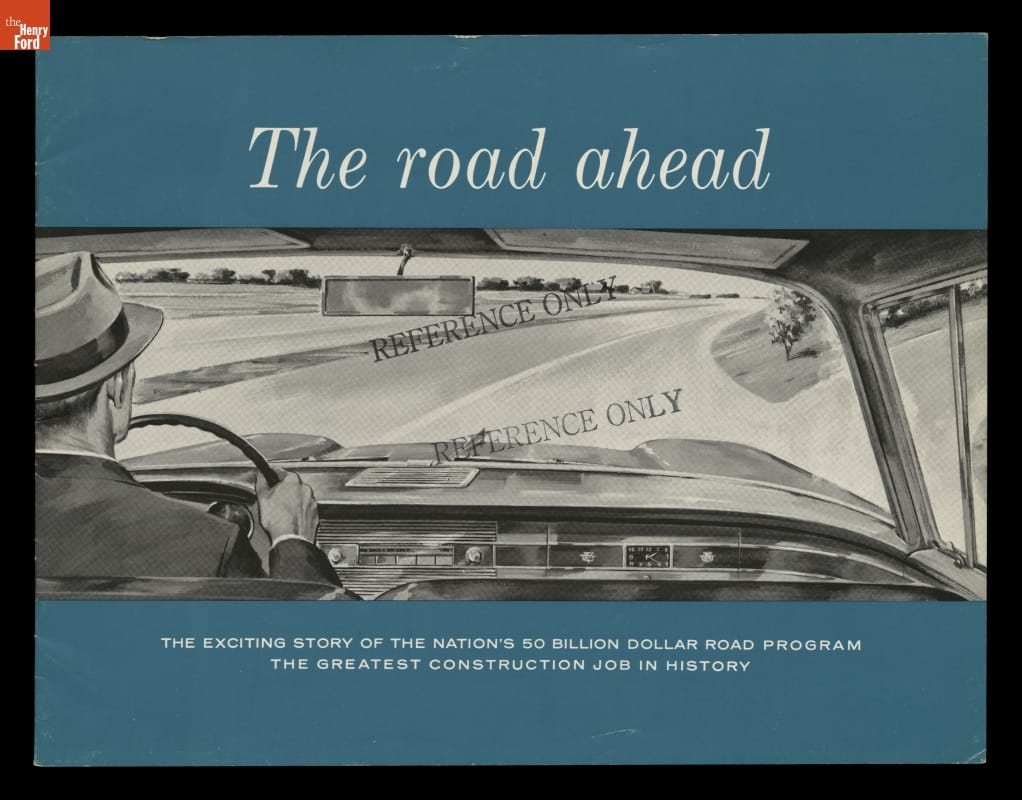 AAA’s active lobbying for better roads included the push for the Federal Aid Highway Act of 1956, authorizing 41,000 miles of interstate expressways. This 1956 booklet, available at AAA Michigan offices at the time, described for eager readers the “Exciting Story of the Nation’s 50 Billion Dollar Road Program.” 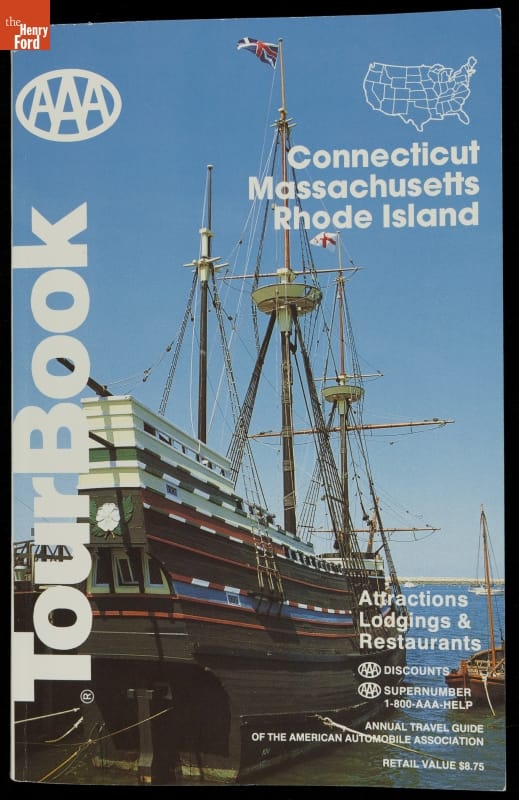 AAA began producing travel guides in the teens and 1920s, to help vacationers plan their trips. The first TourBook in its modern format appeared in 1959. By 1992, the date of this TourBook, these contained a sophisticated rating system as well as indications of accessible accommodations and non-smoking areas in restaurants. In the days before the Internet, having a TourBook in hand guaranteed a no-risk vacation.

Today, AAA Michigan is still continuing to create innovative solutions for their members to travel across the country. Their new AAA app pulls together many of their well-known member benefits into one convenient destination on your phone.

Donna Braden, Curator of Public Life, is looking forward to her vacation later this month, which includes a road trip along the historic Oregon Trail and a long anticipated return to Yellowstone National Park.