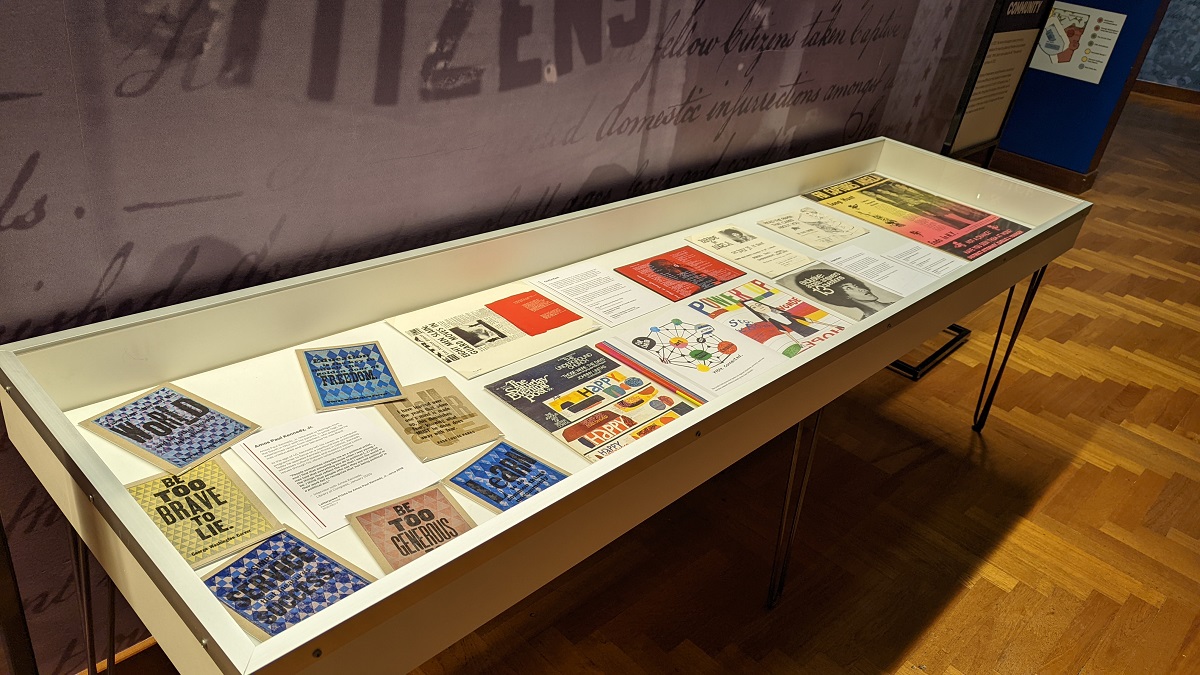 When you think of the word “protest,” what does it mean to you?

A new temporary exhibit now on view in Henry Ford Museum of American Innovation, Quiet & Loud Protest, explores this question by demonstrating the ways that protest can be both loud and quiet. Throughout history, people have found different ways to advocate for change, whether marching in the streets or finding quieter ways to be an ally. Both are valuable in drawing attention to injustices. The exhibit draws together a small selection of recent acquisitions that showcase how artist-activists have used graphics to demand change and organize communities. The content of the exhibition is replicated in this post (with slightly expanded descriptions) for those unable to see it in person. 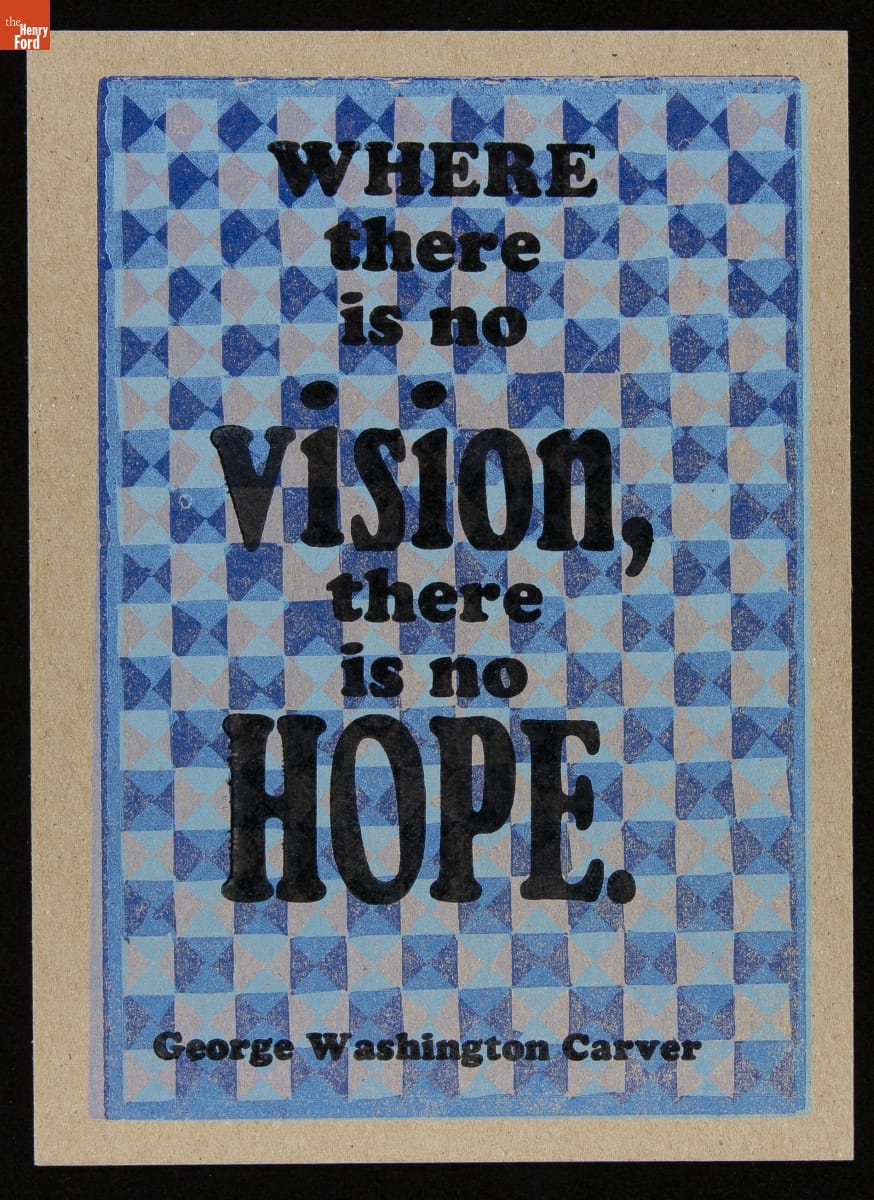 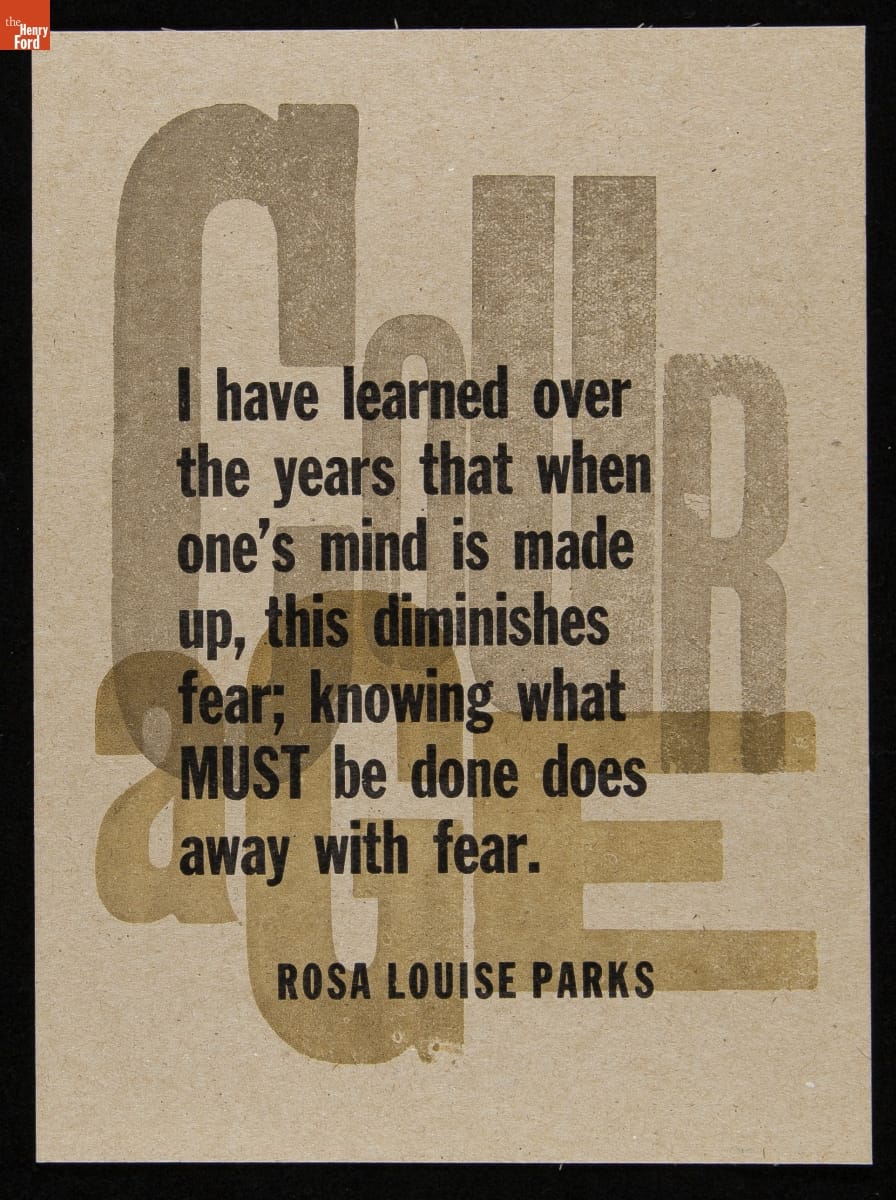 Amos Paul Kennedy Jr. has generously donated several prints to the collections of The Henry Ford. These examples feature quotes attributed to George Washington Carver and Rosa Parks—two advocates for change who are prominent in our collections. / THF626953 (top), THF626939 (bottom)

These letterpress prints are by Amos Paul Kennedy, Jr., who relocated to Michigan from the South in 1963 with his parents. In junior high, he experienced racism from teachers who presumed he was uneducated and poor because he was Black.

At the age of 40, Kennedy visited Colonial Williamsburg while on vacation with his family and was so enamored with the letterpress and bookbinding demonstrations being given by historical reenactors that he went home and began to take classes at a community print shop. His love for the medium grew to the point where he made the decision to leave his career as a corporate computer programmer at AT&T so that he could focus on printmaking full time. 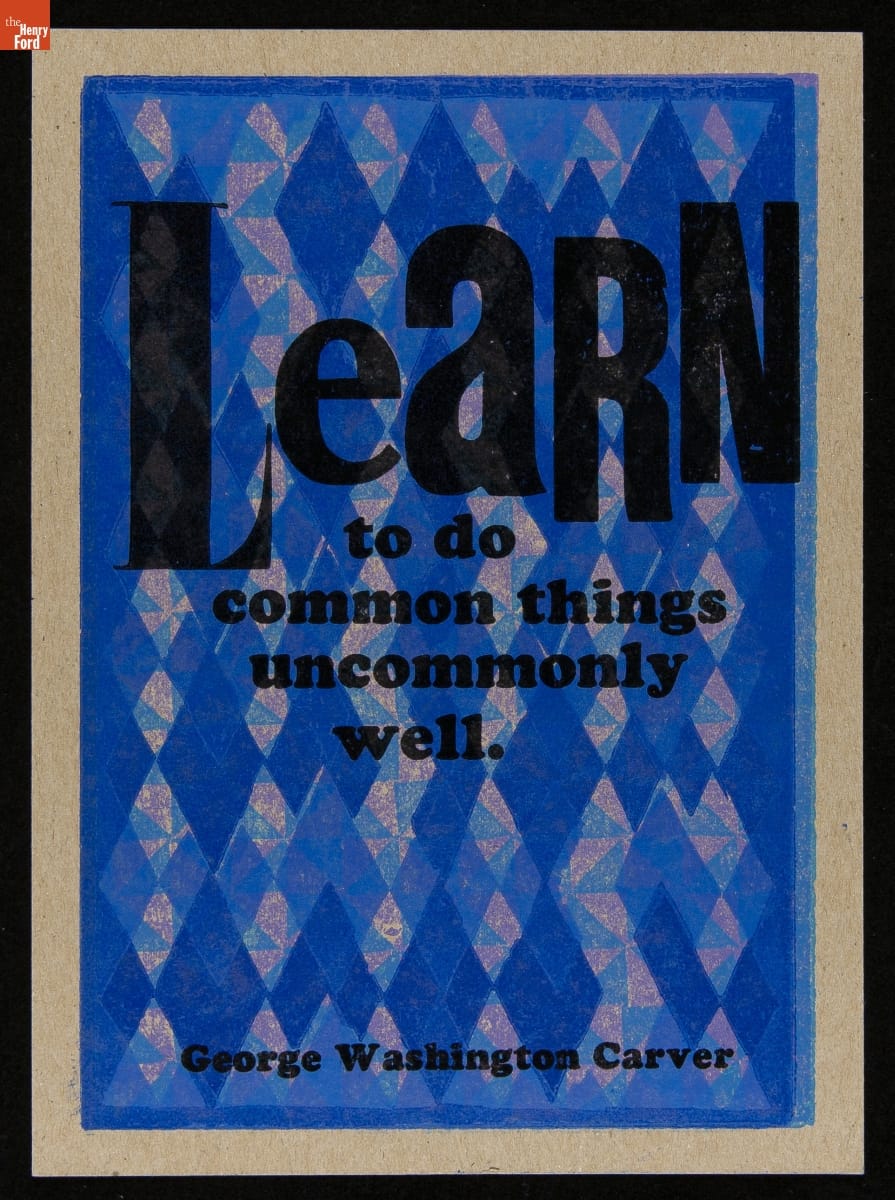 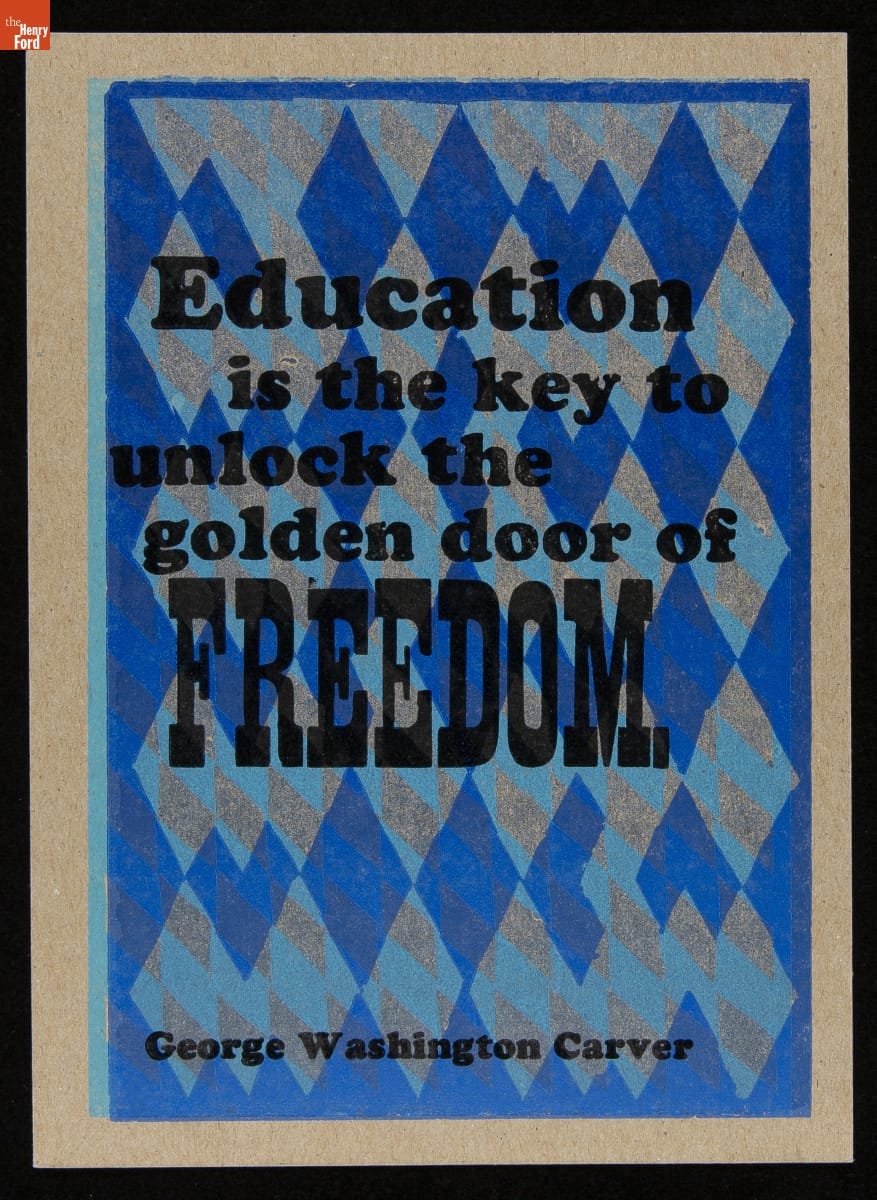 He went on to earn an MFA in Fine Arts and taught in university art programs. When Kennedy left academia, he adopted the historical role of an iterant printer, travelling through the American South to different print shops, learning about print media and developing his style over the course of many years. Kennedy sometimes describes himself as a “humble Negro printer” and wears bib overalls with a pink dress shirt. By doing this, Kennedy confronts people with their biases, causing them to question race, language use, and class. In 2013, Kennedy moved to Detroit, where he operates Kennedy Prints today. 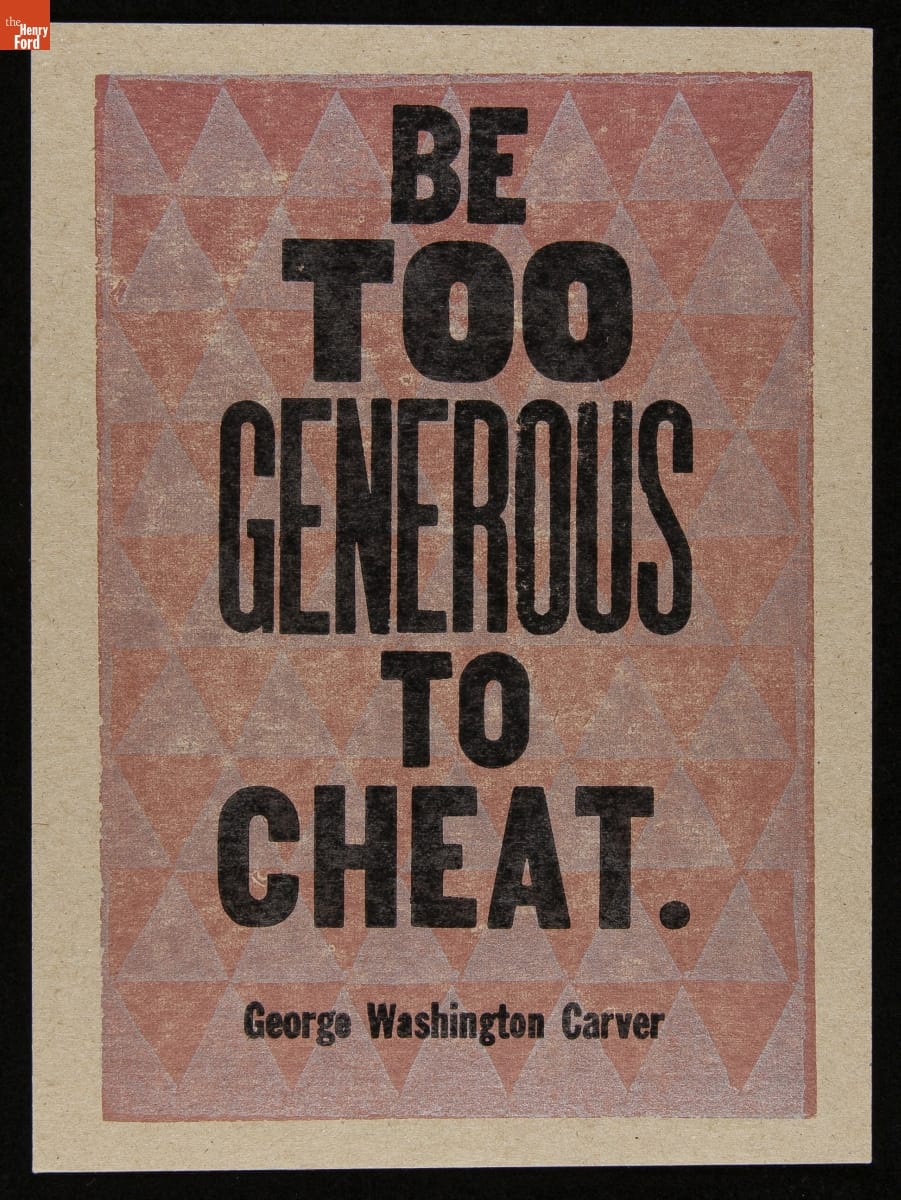 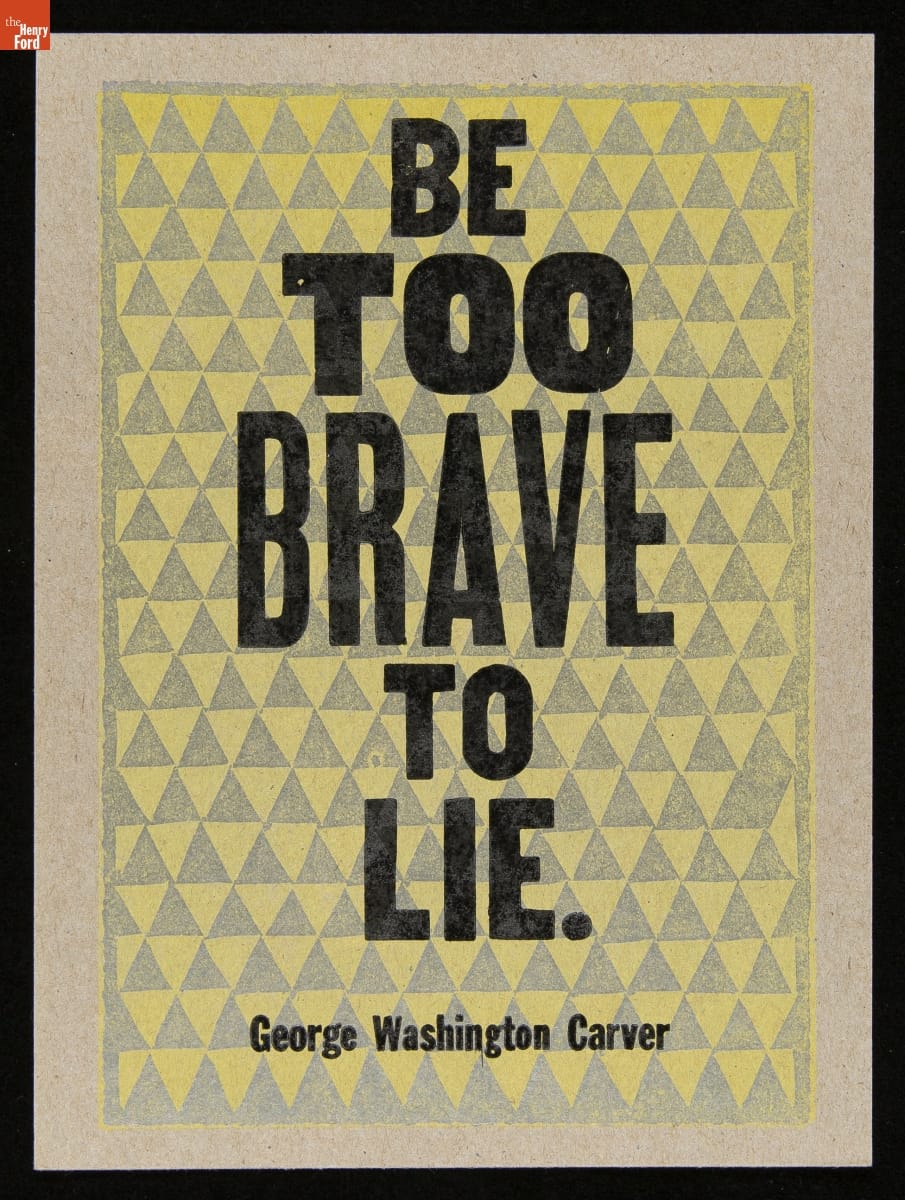 Kennedy is known for his prolific output of vibrant letterpress prints that address cultural biases and social justice issues. Many of his prints feature quotes by Black civil rights activists and abolitionists, scientists and innovators, and literary figures, as well as traditional African proverbs. In an interview with the Library of Congress in January 2020, Kennedy said:

“People sometimes classify me as a political artist, and I find that amusing because when I was young, I was told that everything you do is political […] I print the things that reflect the way that I want the world to be. I think that people who say they are not political in their work fail to recognize that ‘not being political’ is a political act.”

Kennedy refuses to call himself an artist and sells his work at affordable prices to make it more accessible. Thanks to the power of the multiple, Kennedy can use printmaking to spread messages of hope widely—to reflect exactly the type of world that he wants to live in. 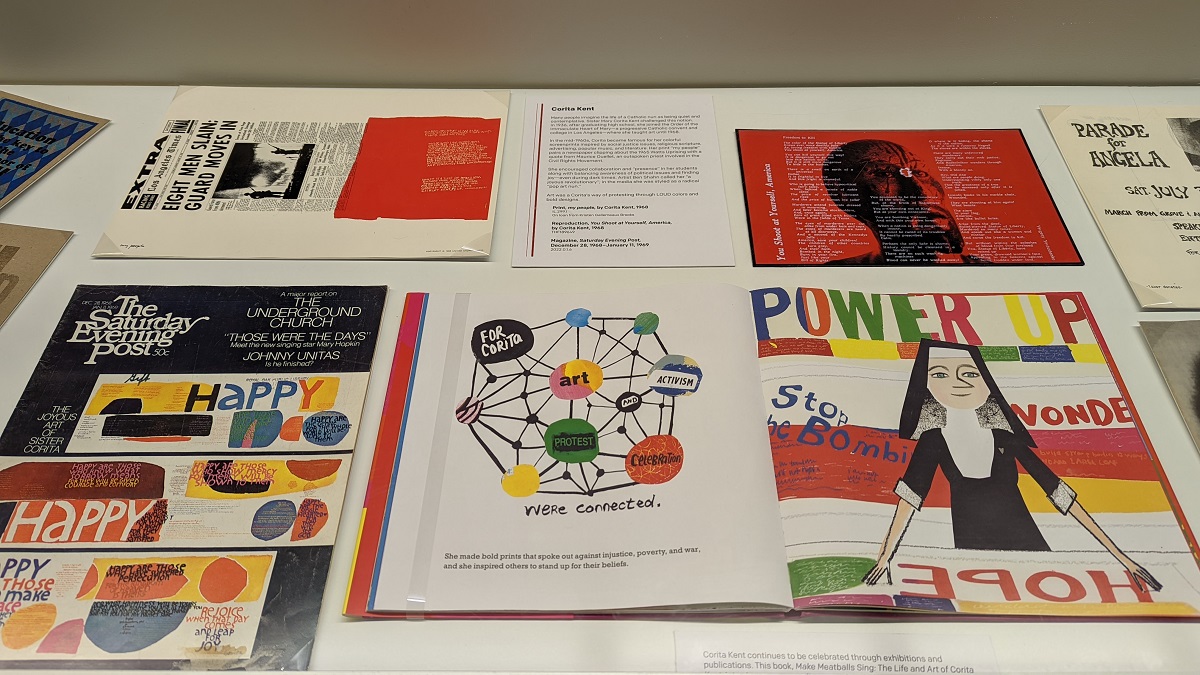 Many people imagine the life of a Catholic nun as quiet and contemplative. Sister Mary Corita Kent challenged this notion. In 1936, after graduating high school, she joined the Order of the Immaculate Heart of Mary—a progressive Catholic convent and college in Los Angeles—where she taught art until 1968.

In the mid-1960s, Corita became famous for her colorful screenprints inspired by social justice issues, religious scripture, advertising, popular music, and literature. Her most celebrated prints are text-heavy and vibrant, layering blocks of bright color and DayGlo ink with high-key photographic imagery and words that twist around the page. 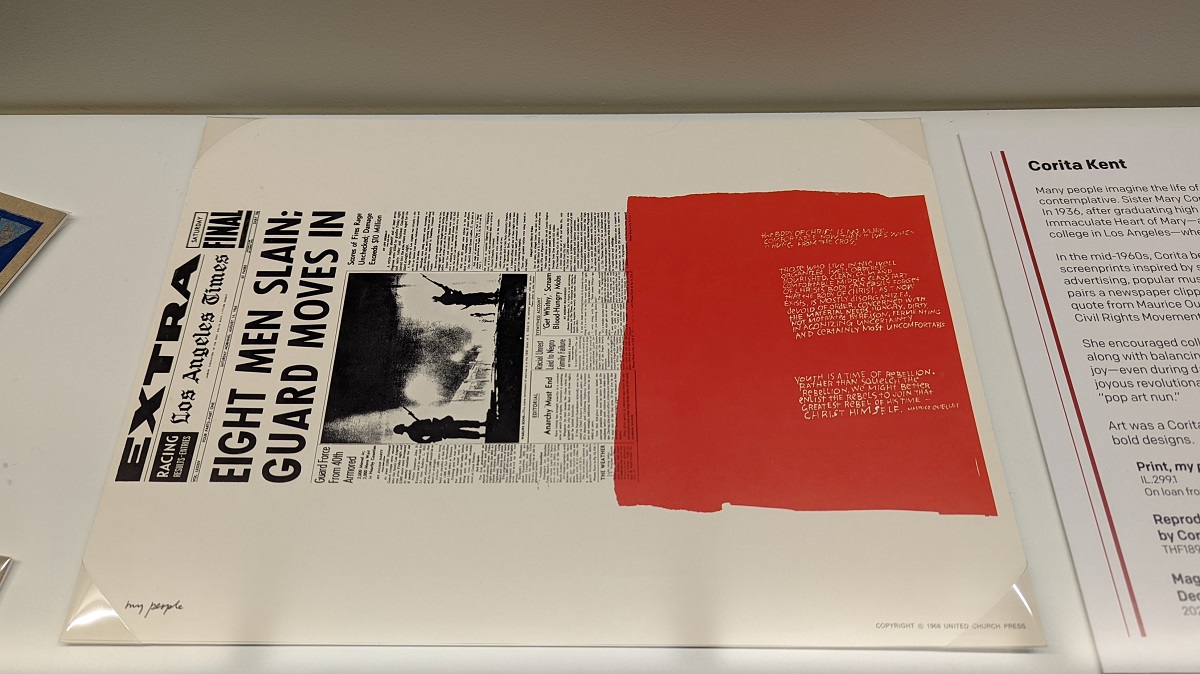 Her print “my people” pairs a newspaper clipping about the 1965 Watts Uprising with a quote from Maurice Ouellet, an outspoken priest involved in the Civil Rights Movement in Selma, Alabama. Part of the quote Corita included reads: “Youth is a time of rebellion. Rather than squelch the rebellion, we might better enlist the rebels to join that greatest rebel of his time—Christ himself.” And in an oral history, Corita herself said: “I feel that the time for physically tearing things down is over. It’s over because as we stand and listen, we can hear it crumbling from within.” 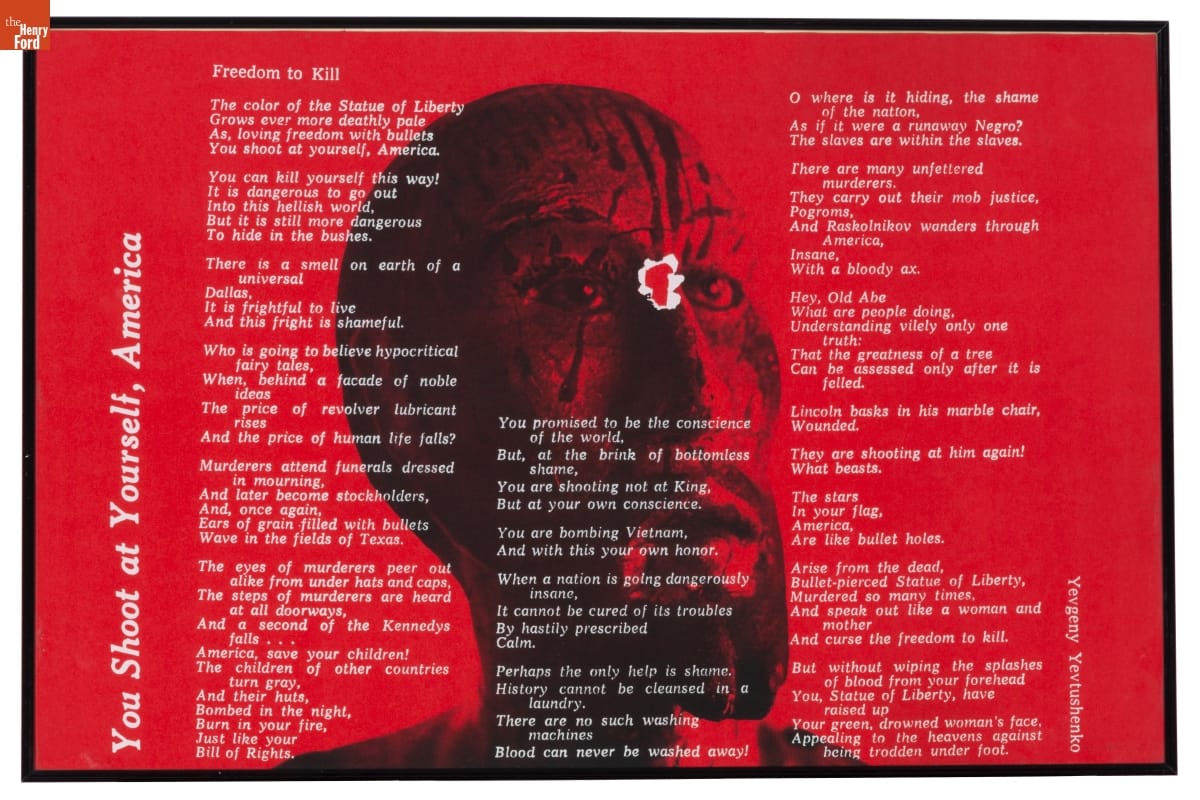 Corita Kent’s print “You Shoot at Yourself, America” was created in response to the 1968 assassination of Robert F. Kennedy. It features a poem by Yevgeny Aleksandrovich. / THF189649 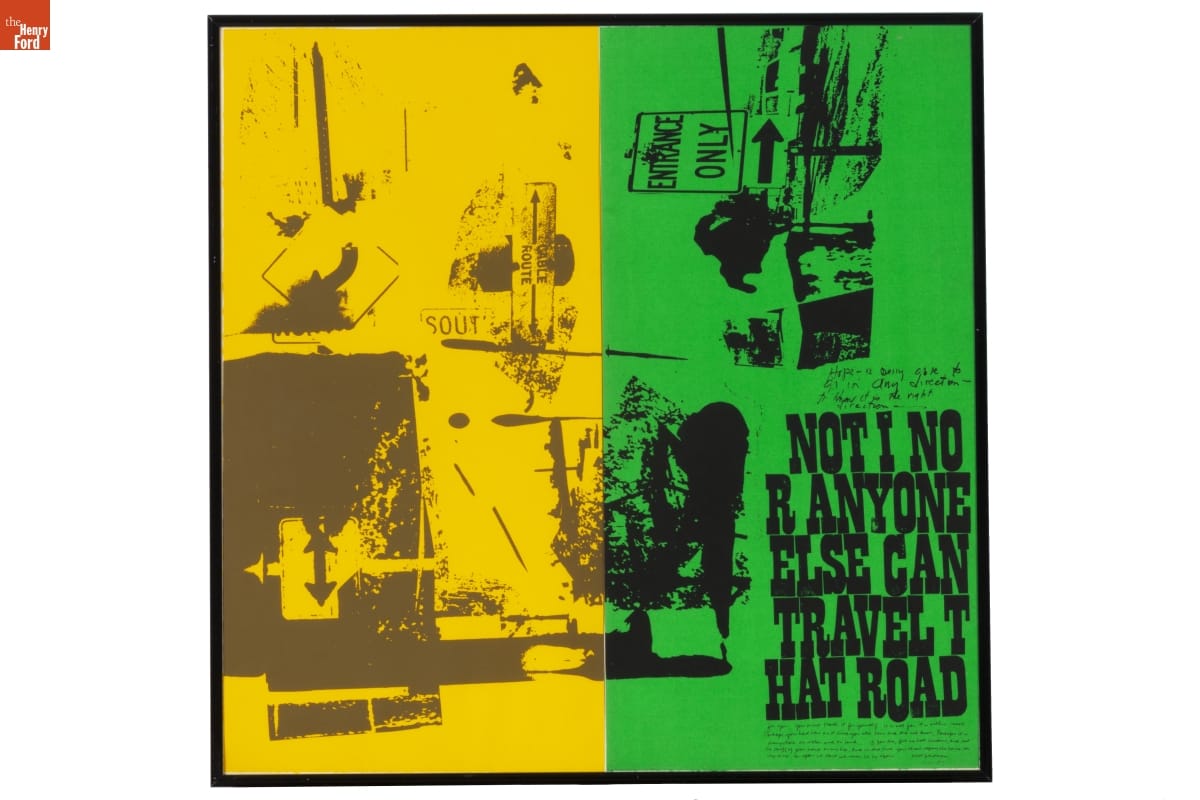 Corita encouraged collaboration and “presence” among her students and encouraged them to balance awareness of political issues with finding joyful moments—even during dark times. Many important designers and creative thinkers visited her classroom, including Buckminster Fuller and Charles and Ray Eames. Artist Ben Shahn once called her “a joyous revolutionary” and in the media she was styled as a radical “pop art nun.”

Art was a Corita’s way of protesting through LOUD colors and bold designs.

During the height of Corita’s fame, the Catholic Church was reassessing many of its traditions, striving for unity and modernization under Vatican II. And yet not everyone agreed. In 1967, the Los Angeles archdiocese and Archbishop James McIntyre claimed the Immaculate Heart Community’s (IHC’s) approach to education was “communist” and referred to Corita’s work as being “blasphemous.” When the IHC sisters were ordered to end the liberating “renewal innovations” they had come to enjoy—or be asked to leave their teaching posts—many asked to be released from their vows and left in protest.

Corita’s decision to leave the order came a little sooner. In 1968, exhausted from an intense schedule and censorship from the church, Corita took a sabbatical. At the end of her time away, she left the Order and moved to Boston. There, she continued to receive commissions and to create art such as painting the Boston Gas Company’s tanks and designing the iconic “Love” postage stamp. 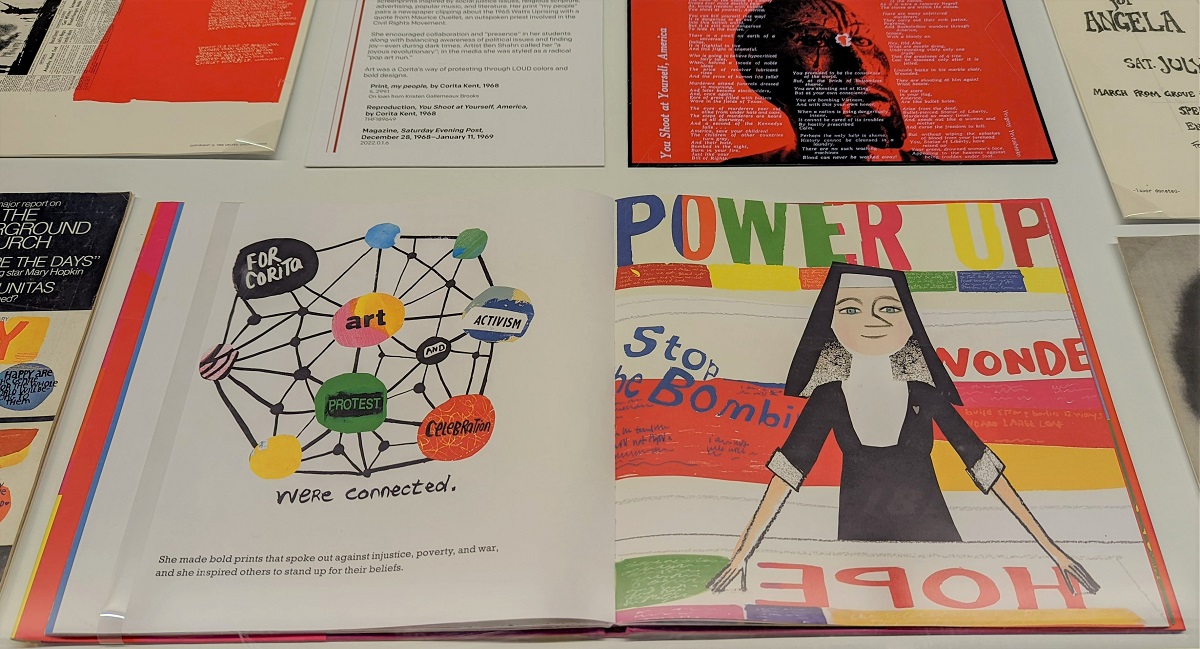 Corita Kent continues to be celebrated through exhibitions and publications. This book, Make Meatballs Sing: The Life and Art of Corita Kent, introduces young audiences to her story. / Photo by Kristen Gallerneaux

Angela Davis is an activist, educator, and scholar who was a member of the Communist Party USA and the Black Panther Party. In 1970, Davis was placed on the FBI’s “Most Wanted” list. Guns registered to her name were used in a fatal attempt to free the Soledad Brothers during a courtroom trial. Davis was not present at the event. She fled police, fearing unfair treatment. After her capture, she spent 18 months in prison until being cleared of charges.

For some people, Davis is a controversial figure who believed in non-peaceful protest. To others, she is an inspiration as an outspoken supporter of women’s and civil rights, prison reform, and socialism. In recent years, she came out as lesbian and advocates for LGBTQ+ rights as well as those of Palestinian people.

The following artifacts relate to the impact of Angela Davis’s activism, past and present. 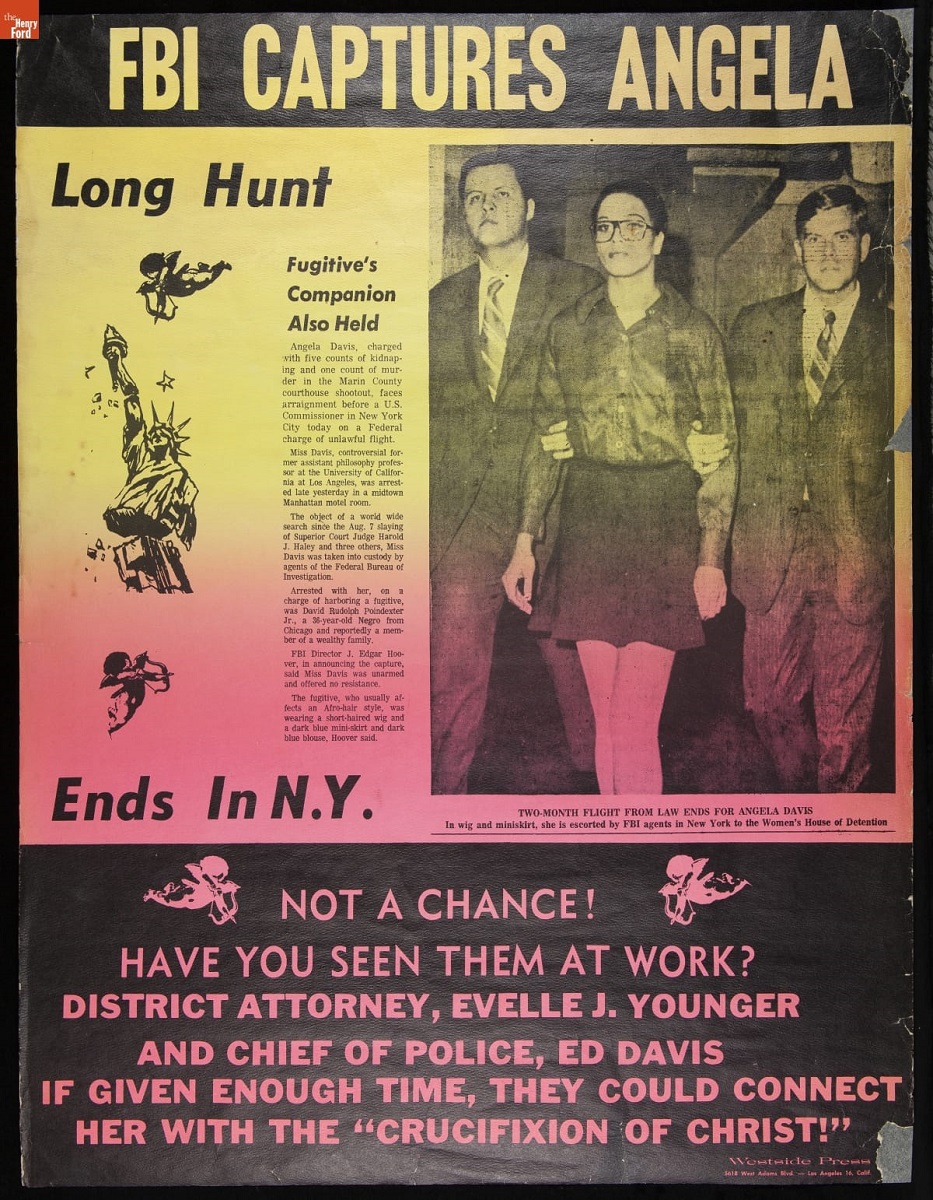 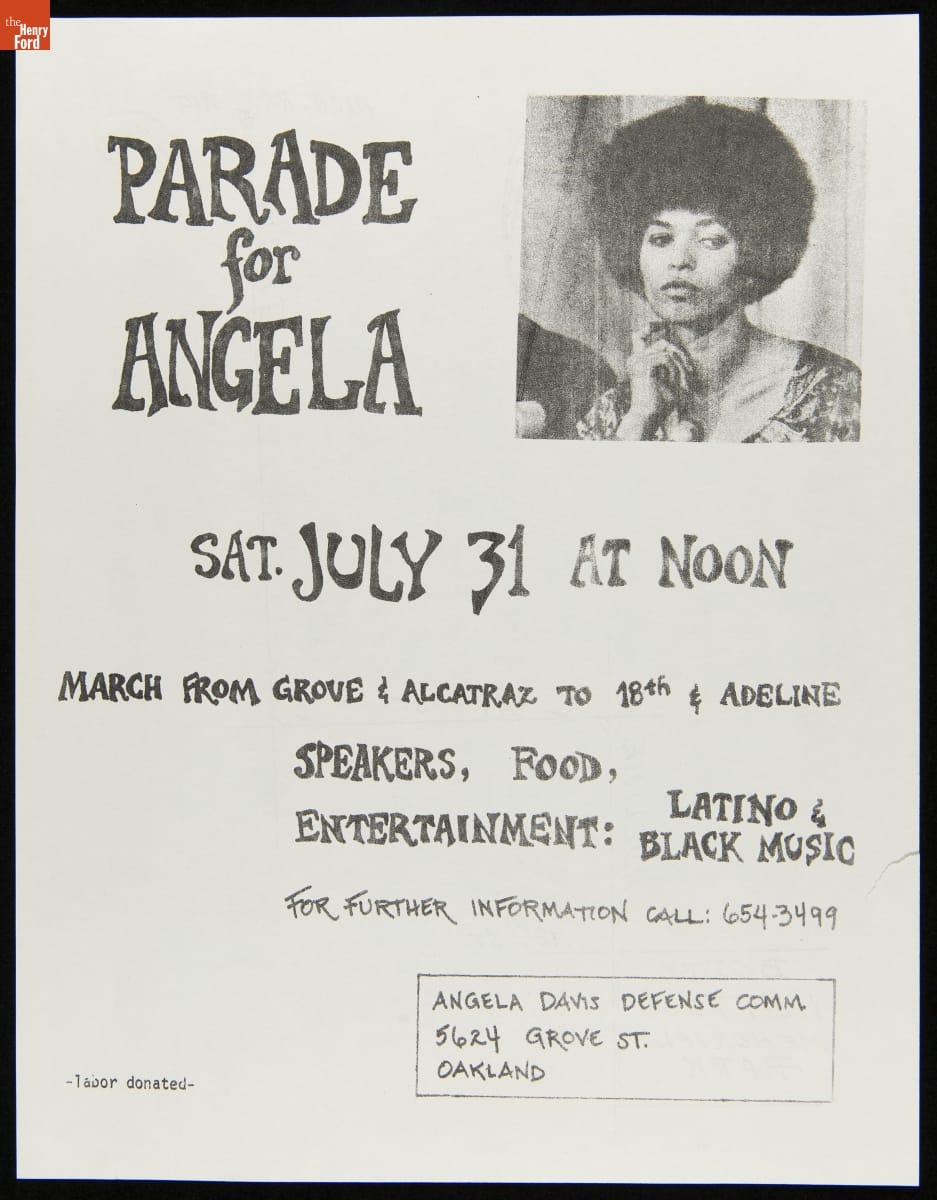 A parade flier documents the international “Free Angela” movement. The reverse side shows the planned route through Oakland, California. / THF627614 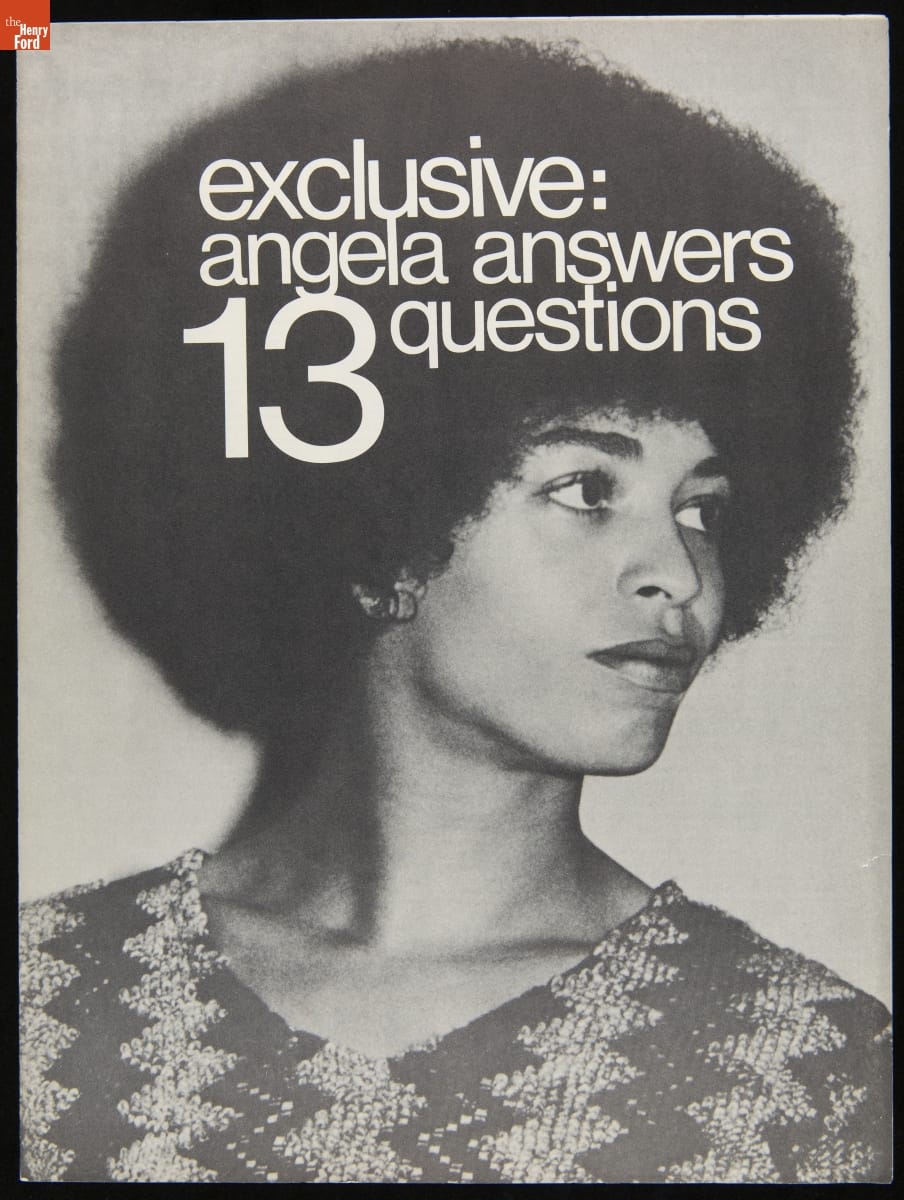 “13 Questions…” was the first interview with Davis while she was incarcerated. Her discussion with Joe Walker covers topics such as the surveillance of Black people, legal corruption, solidarity, and dismal prison conditions. / THF62759 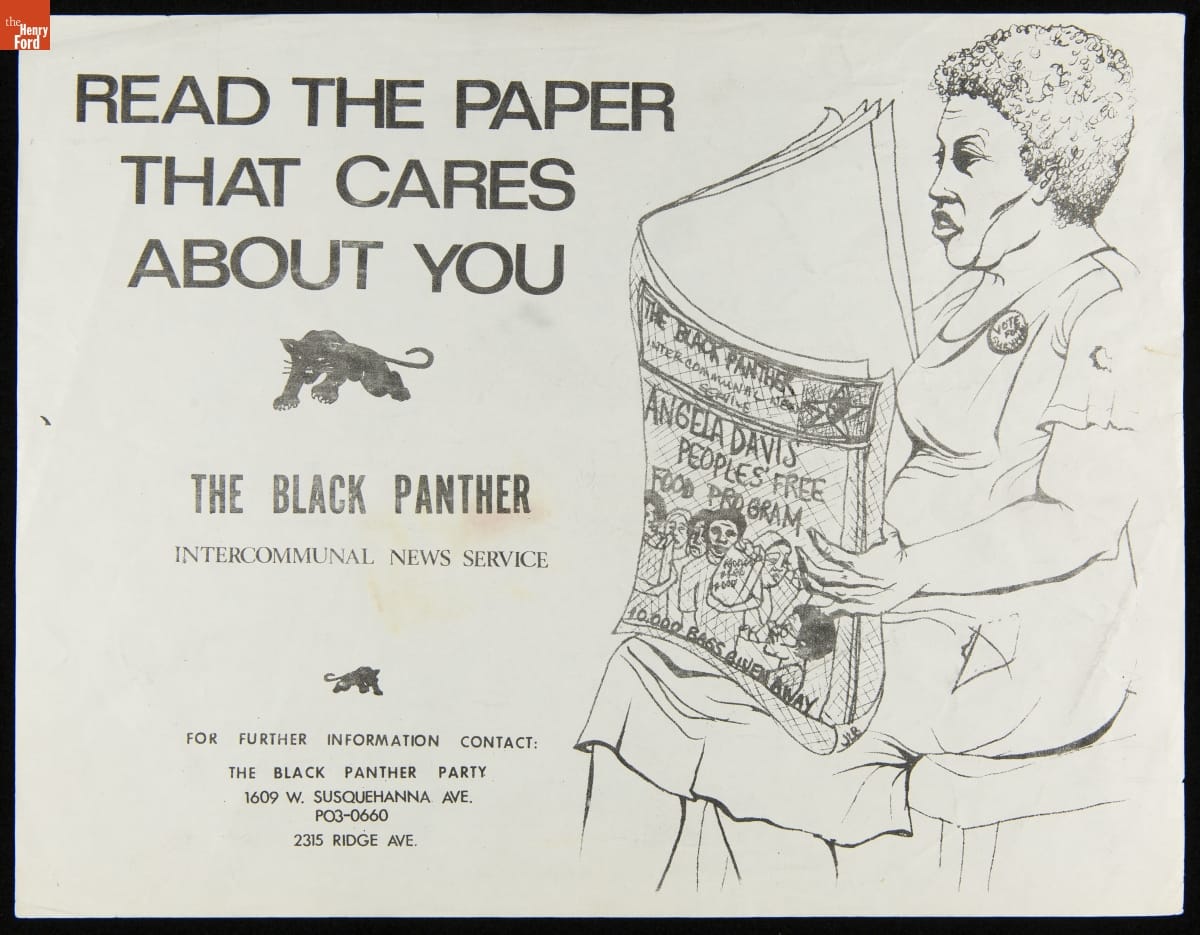 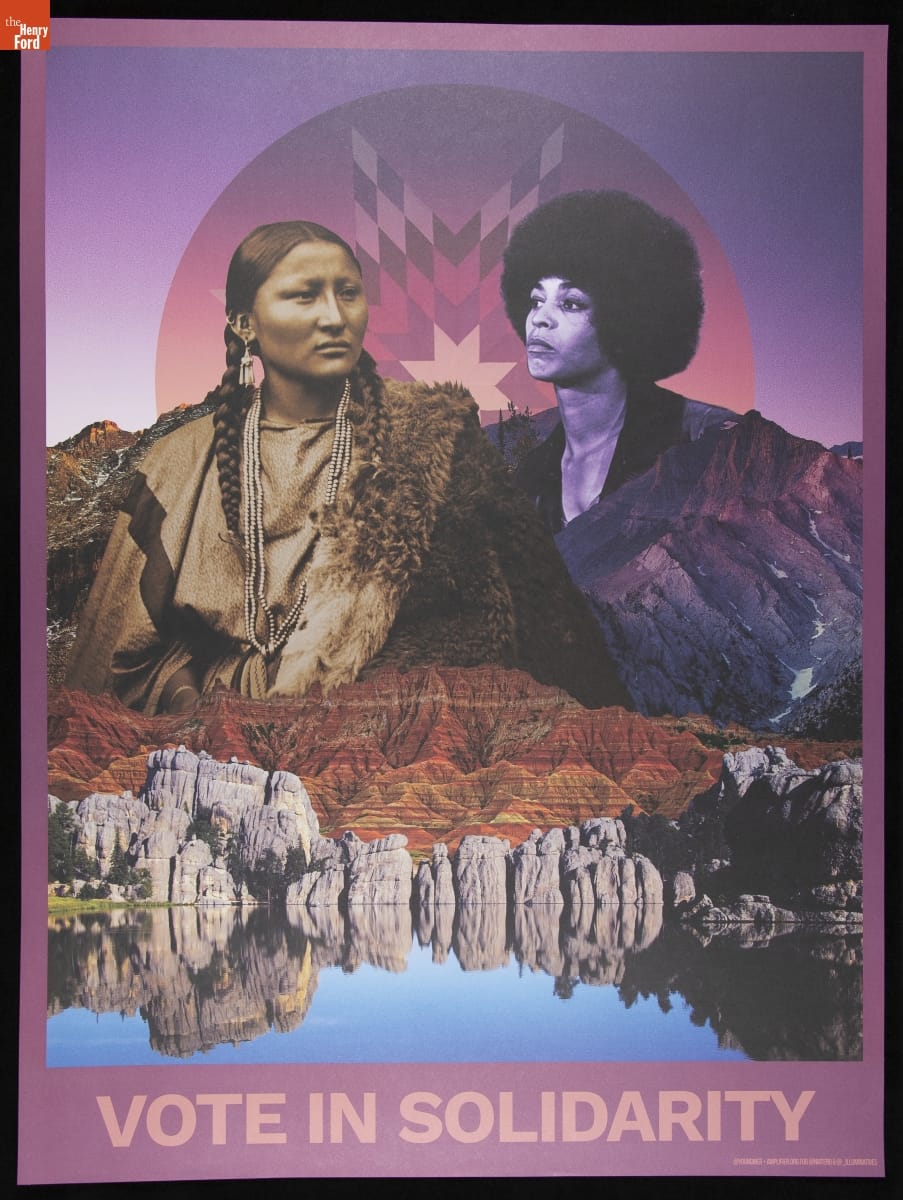 Davis appears in a poster by Tongva artist Mer Young for the Amplifier Foundation. This poster shows the continued impact of Davis’s legacy and was created to encourage Black and Indigenous voting in the 2020 election. / THF626361

Listening to Our Community

In 2021, The Henry Ford began to seek community feedback for ways to update and improve our permanent exhibit With Liberty and Justice for All. This work is continuing in 2022.

Stories of movements, social innovators, and political history are difficult to fully capture in museum labels. There is always too much to tell in 100 words or less. To address this, throughout the display of this exhibit, we will be inviting several community partners to contribute their own labels, in their own voices, to foreground the issues they believe matter the most.


Kristen Gallerneaux is Curator of Communications & Information Technology at The Henry Ford. Quiet & Loud Protest is on view in Henry Ford Museum of American Innovation until March 31, 2022.