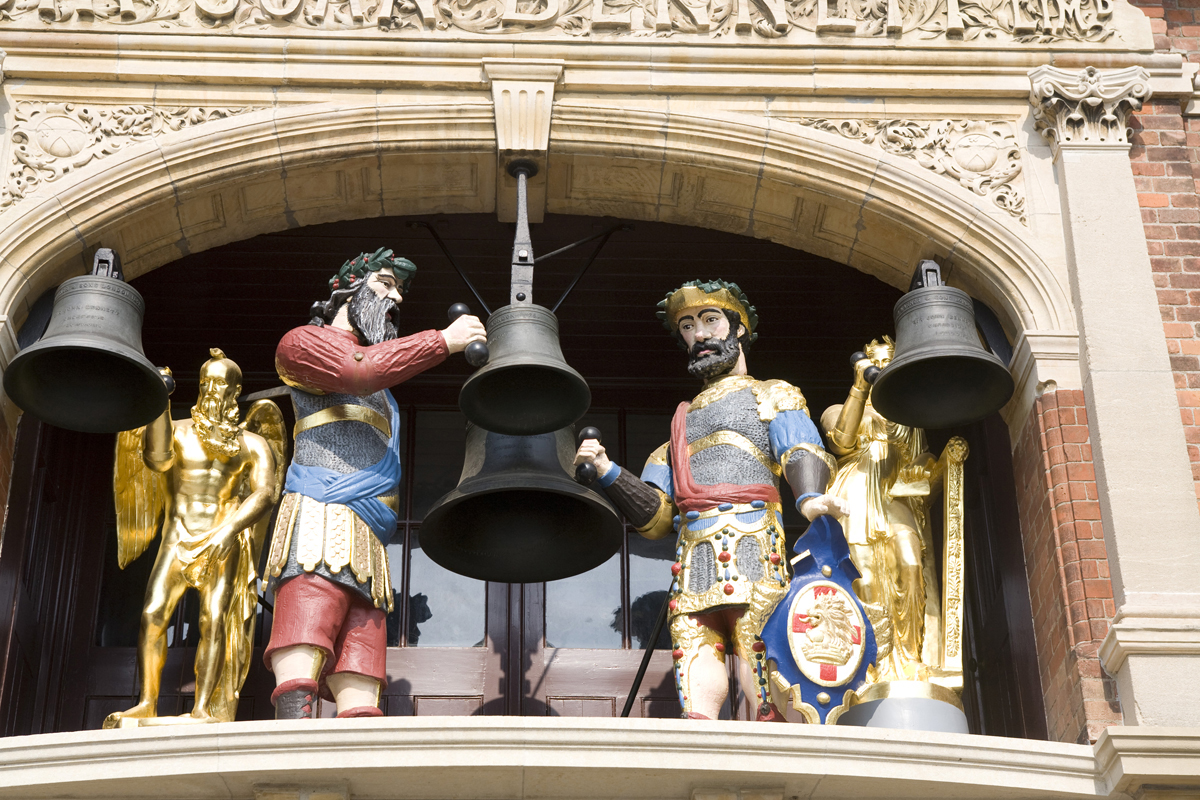 The quarter-hour chime of the Sir John Bennett tower clock is a memorable sound that can be heard throughout Greenfield Village, emanating from its four figures—the muse, Gog, Magog, and Father Time (shown right to left above). Early in 2021, Magog’s chime and striking arm developed cracks along the mechanical shoulder. 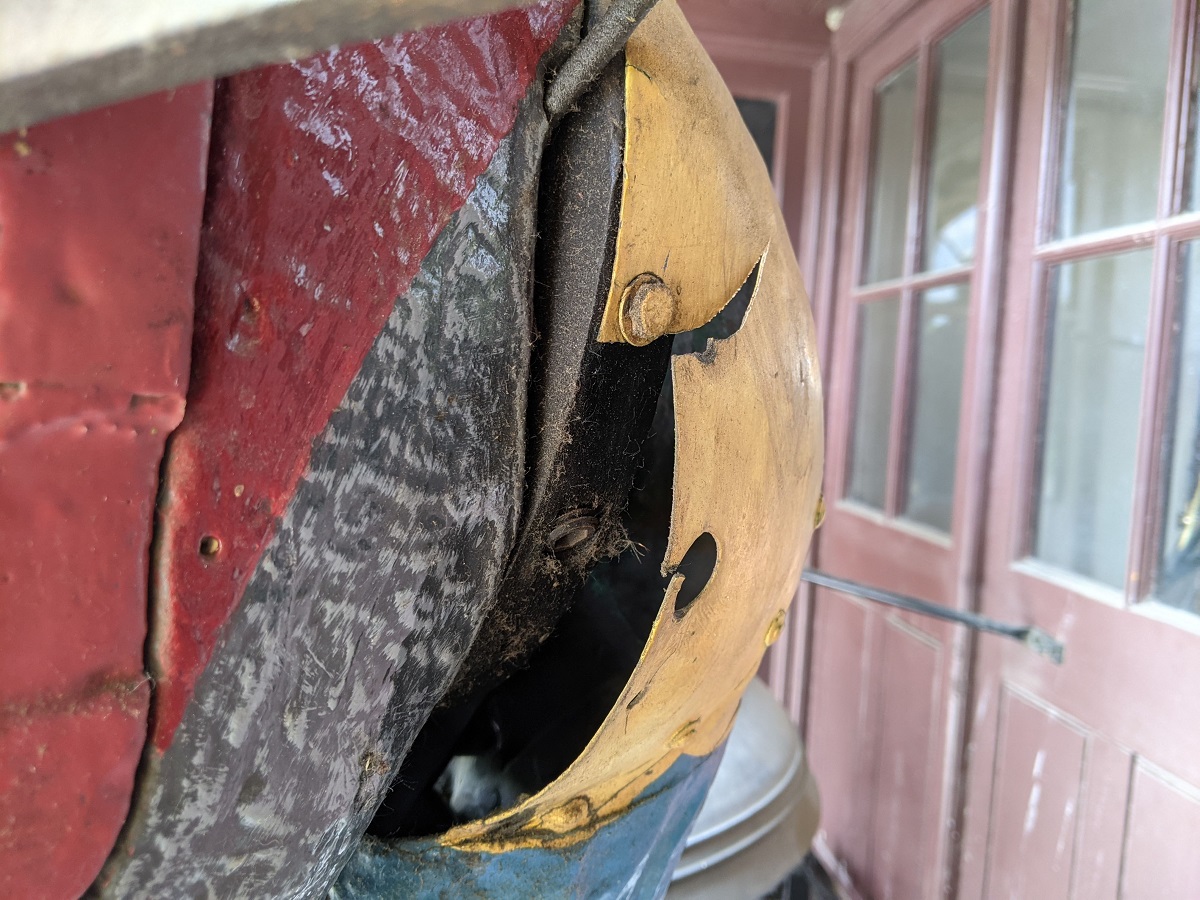 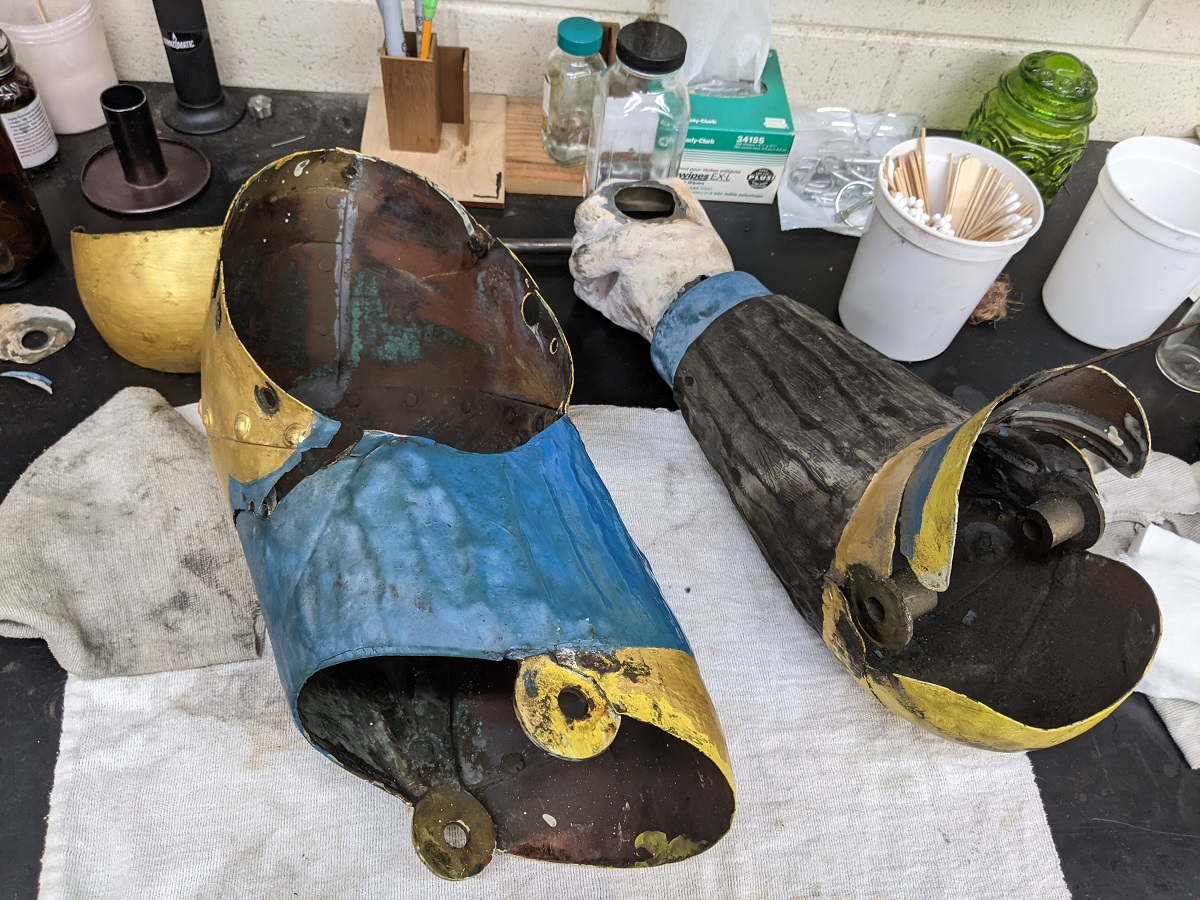 Disassembly of Magog’s arm prior to cleaning. / Photo by Andrew Ganem.

The arm was disassembled by Conservation Specialist Andrew Ganem, and conservation and curatorial staff were faced with a decision to repair the original arm or to replace it with a replica. One of the major concerns with repair was that new cracks could develop in the already thin (0.04”) sheet metal when Sir John Bennett becomes operable again. After some discussion, we made a decision to replicate and replace the arm to allow for safe operation of the clock, while preserving the original component in storage for future reference.

The replica arm could not be easily replicated using conventional copper metalwork techniques because of its highly textured surface. An easier replication method came from our partners at Ford Motor Company, who proposed the use of 3D scanning and polymer printing. To accomplish this, the original arm was 3D scanned and that data imported into a computer-aided design (CAD) program. The replica arm was then printed using stereolithography (SLA) 3D printing. You can learn more about this type of printing here. 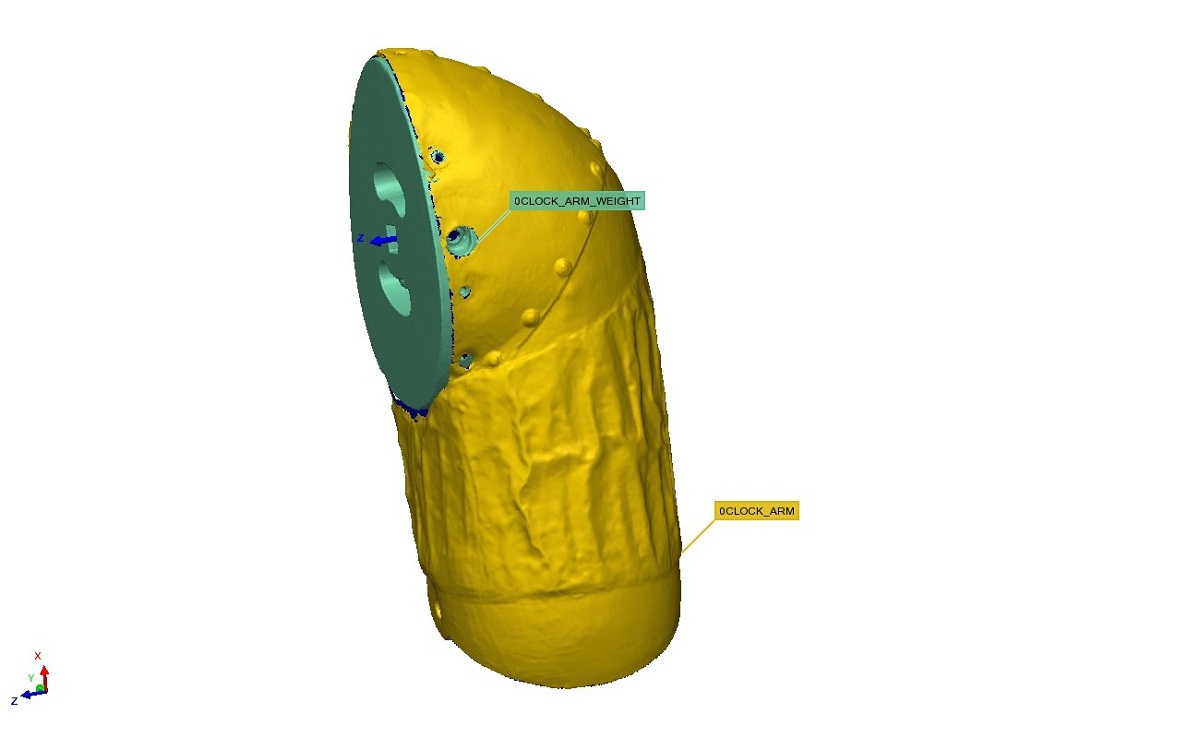 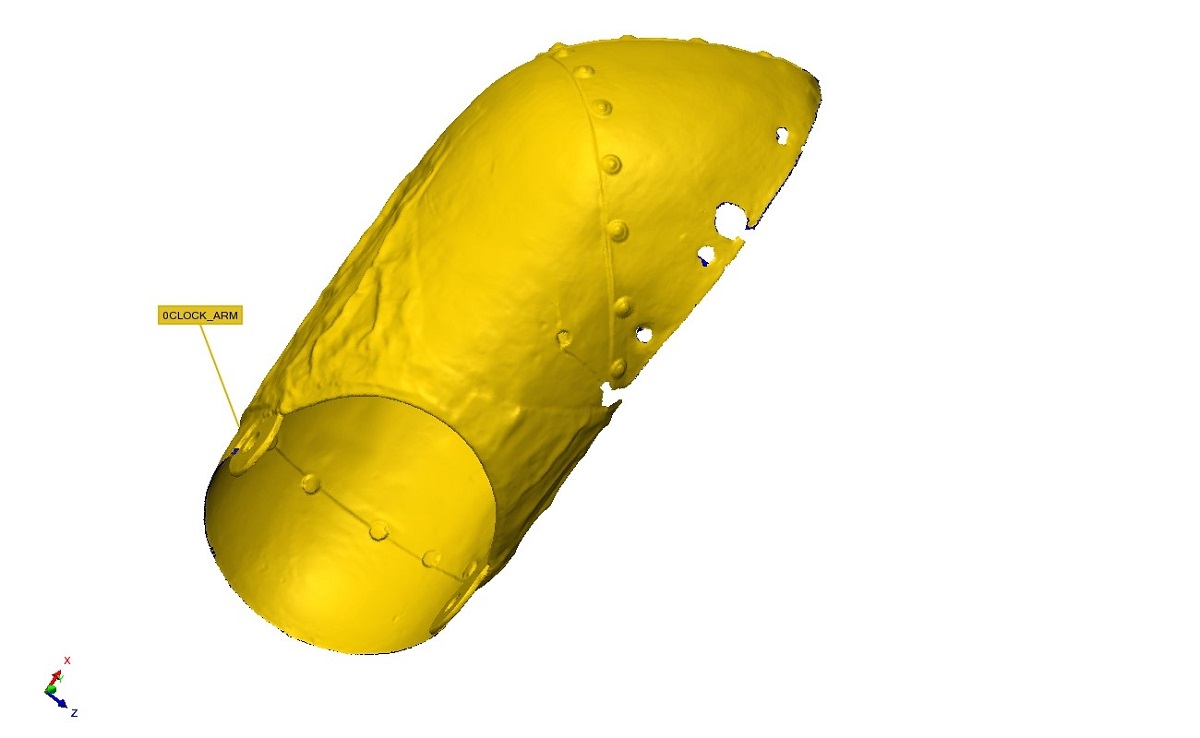 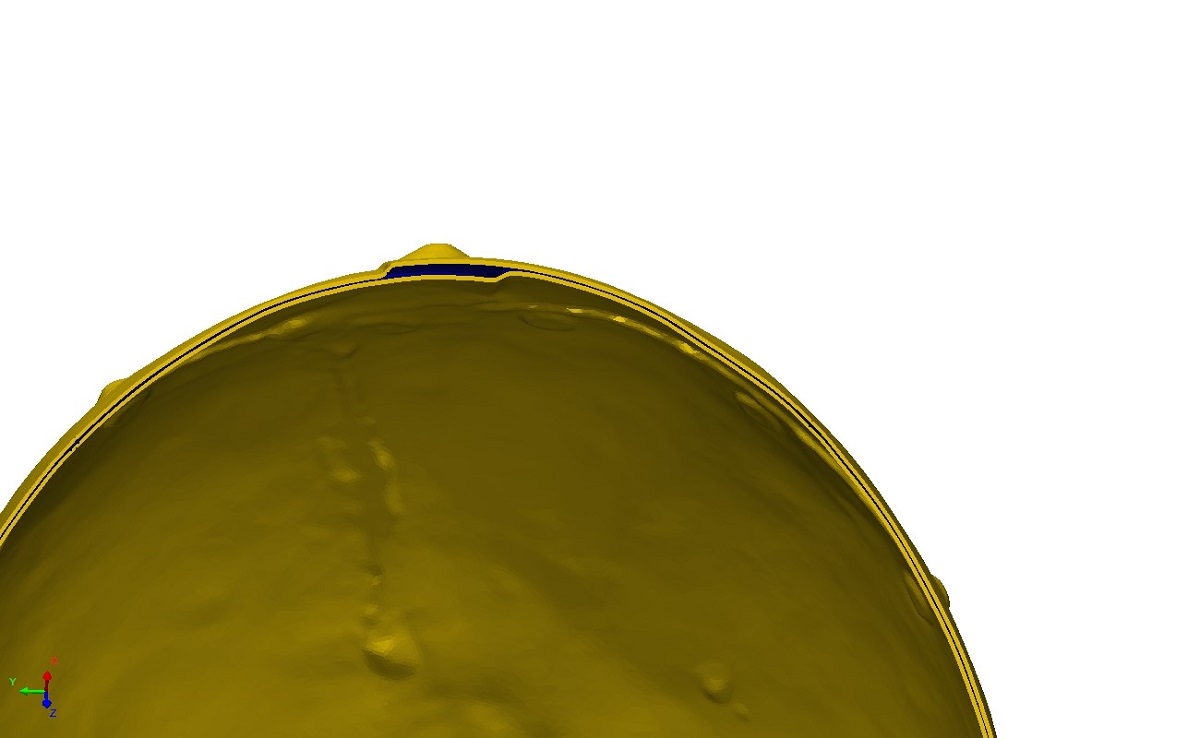 The scanned model of the arm was produced by Daniel Johnson and Kevin Lesperance at Ford Motor Company’s metrology lab. 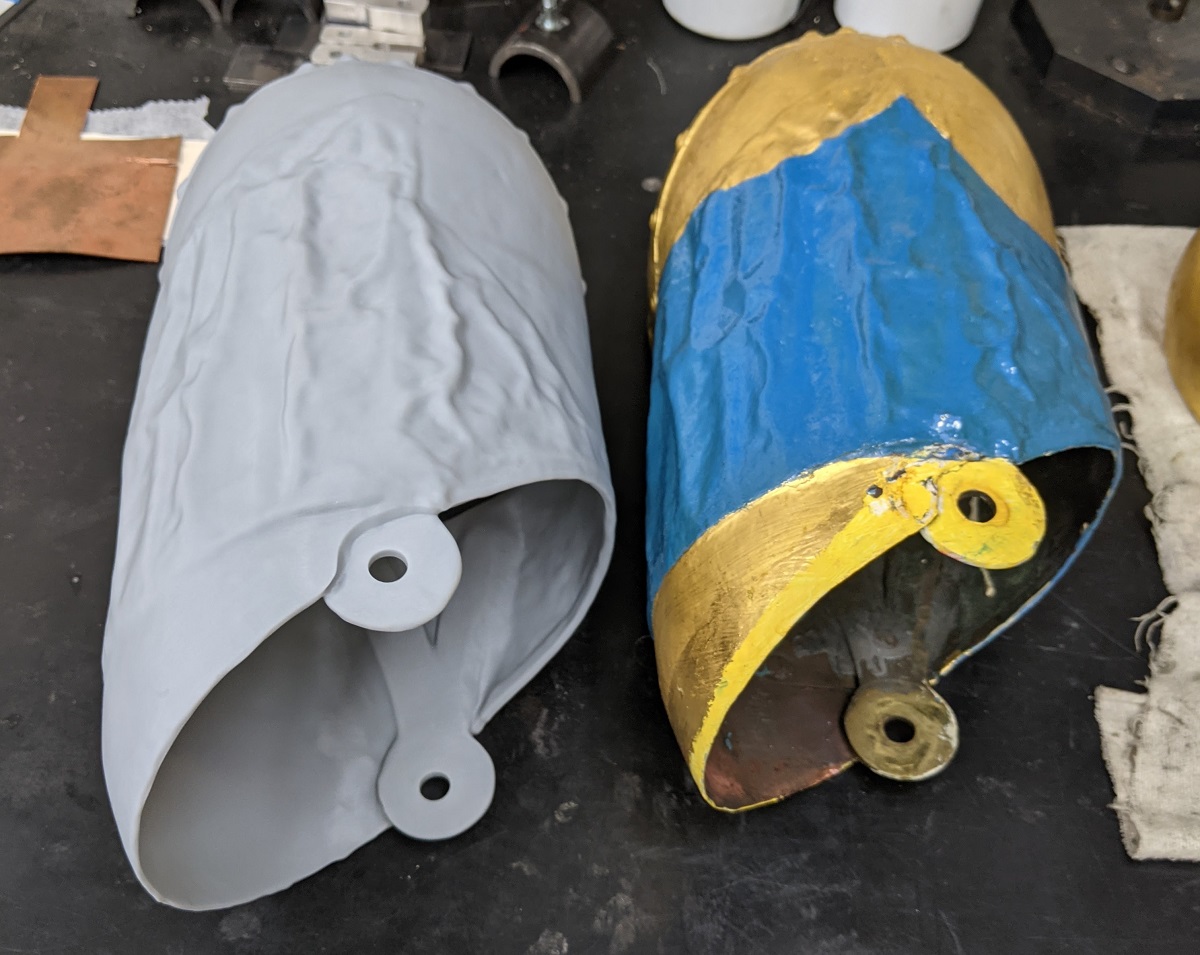 A side-by-side comparison between the SLA 3D-printed copy on the left and the original artifact on the right. / Photo by Cuong Nguyen. 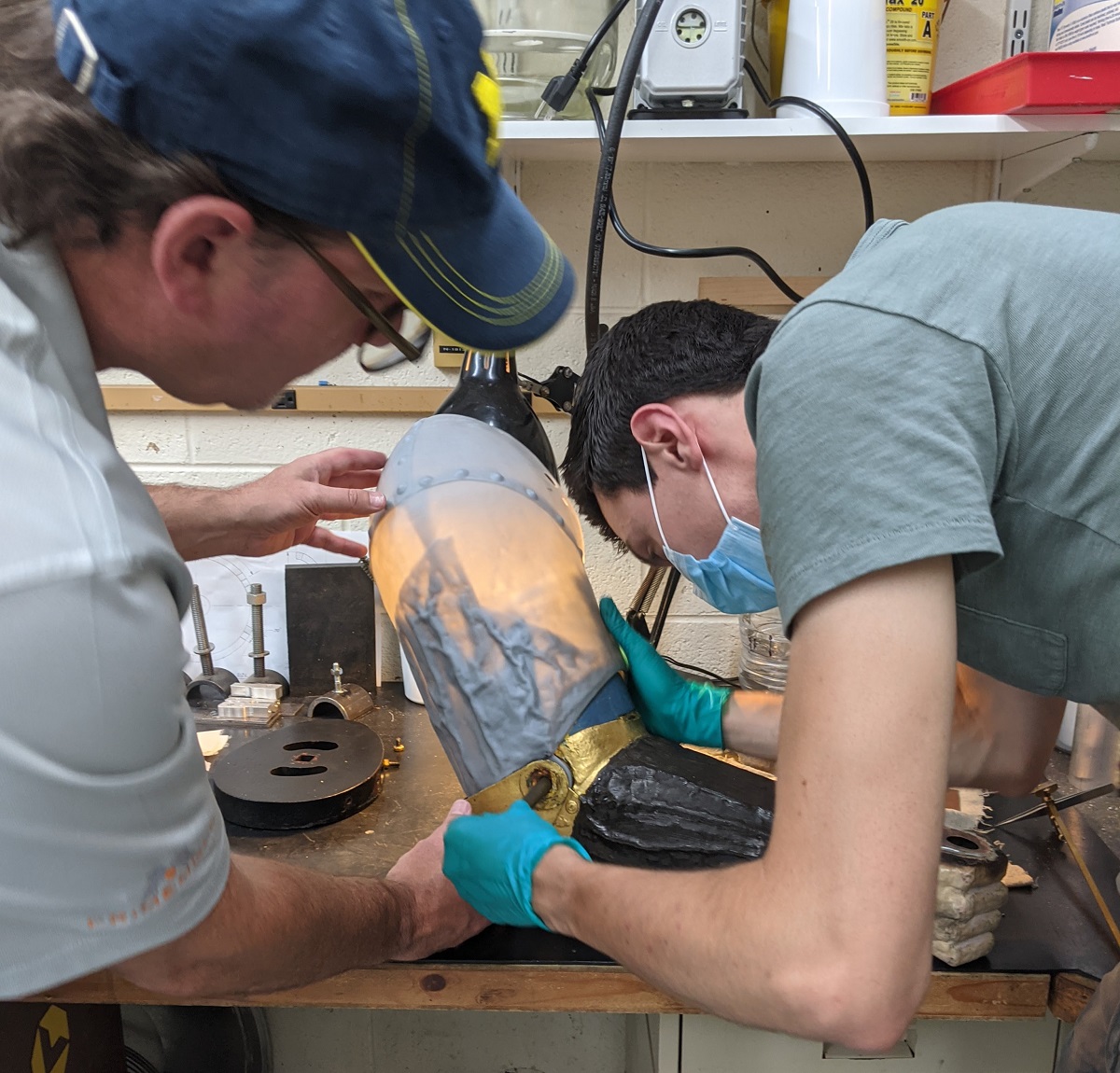 The 3D-printed part is tested for fit prior to electroplating by Ford Motor Company’s Erik Riha on left and The Henry Ford’s Andrew Ganem on the right. / Photo by Cuong Nguyen. 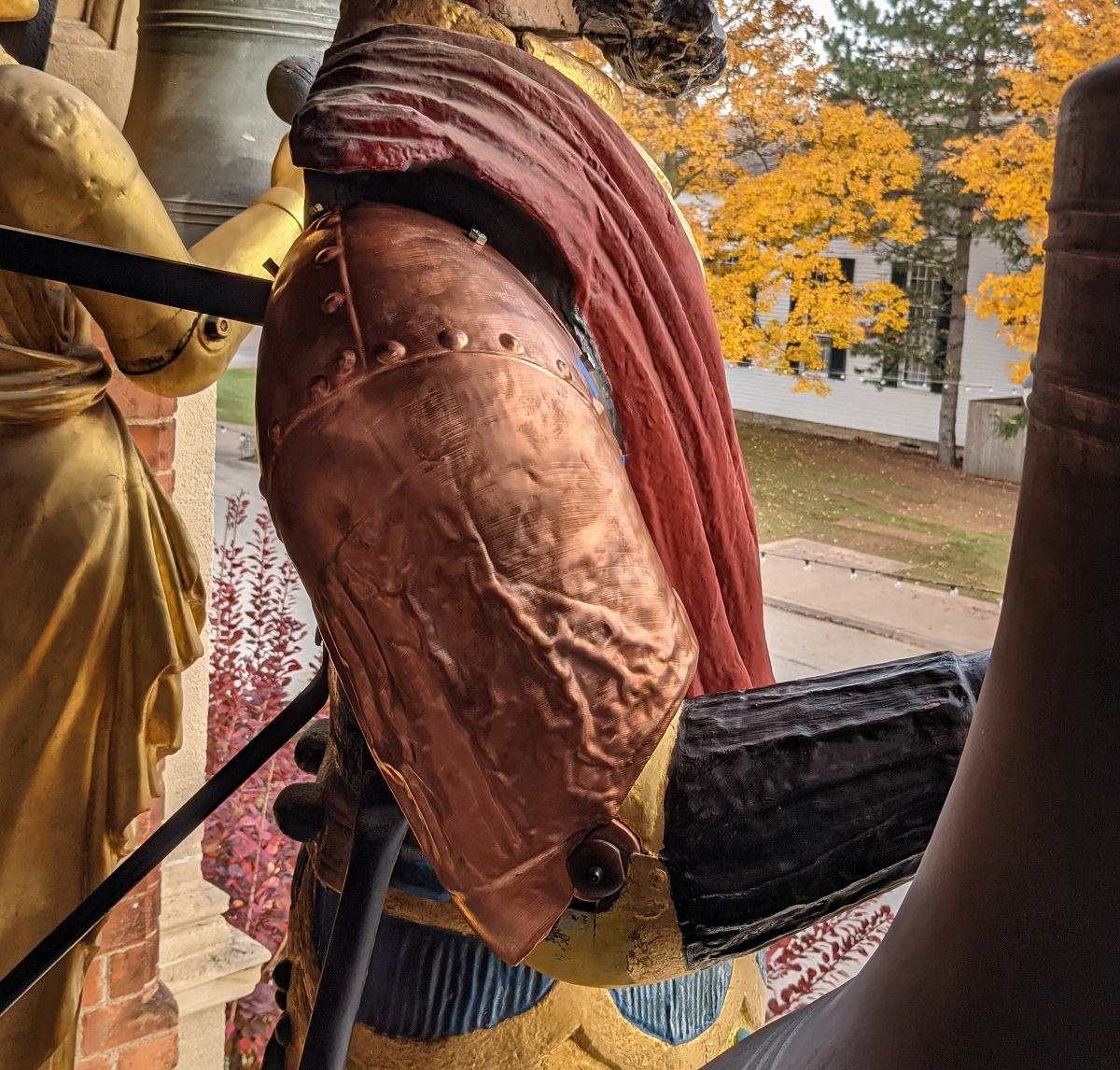 Test for fitting the plated arm onto Magog. / Photo by Cuong Nguyen. 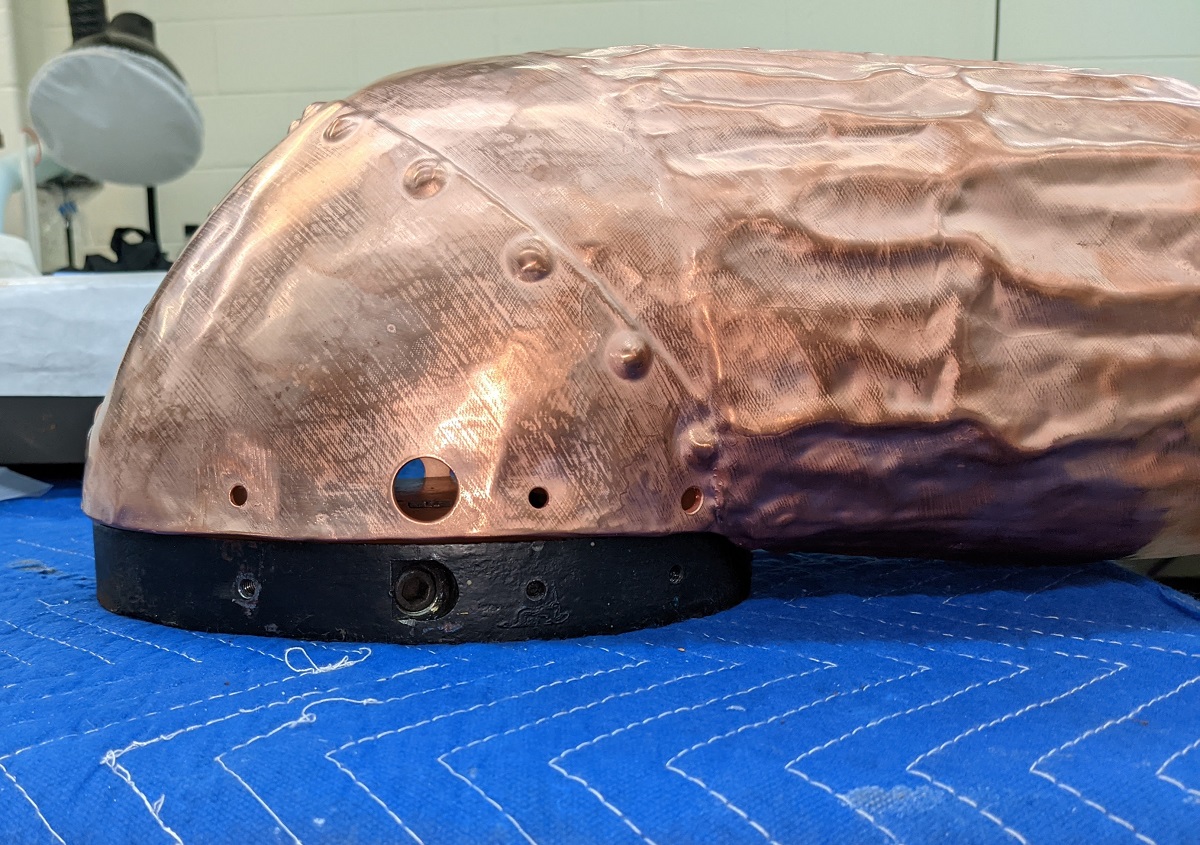 Holes in the cast iron mount for the arm. / Photo by Cuong Nguyen.

The use of an appropriate painting system that could endure the outdoor environment in Greenfield Village was imperative. Dr. Mark Nichols of Coatings, Surface Engineering, and Process Modeling Research at Ford Motor Company and Dan Corum of PPG recommended PSX-One (high solids, acrylic polysiloxane.) Amercoat 2/400 was used as a primer, as it provides chemical, environmental, and moisture resistance. The paint colors on the original arm were matched to a color sample and duplicated by Andrew Wojtowicz of PPG.

The primed surface on the shoulder and elbow was coated with oil sizing and gilded with 24-karat gold.

During a test assembly, we noted that the linkage that connects Magog’s arm to the chiming mechanism was too short, so Andrew fabricated an extension and attached it to the original linkage. He also fabricated new hardware for the elbow joint to accommodate the additional thickness of the replacement part. 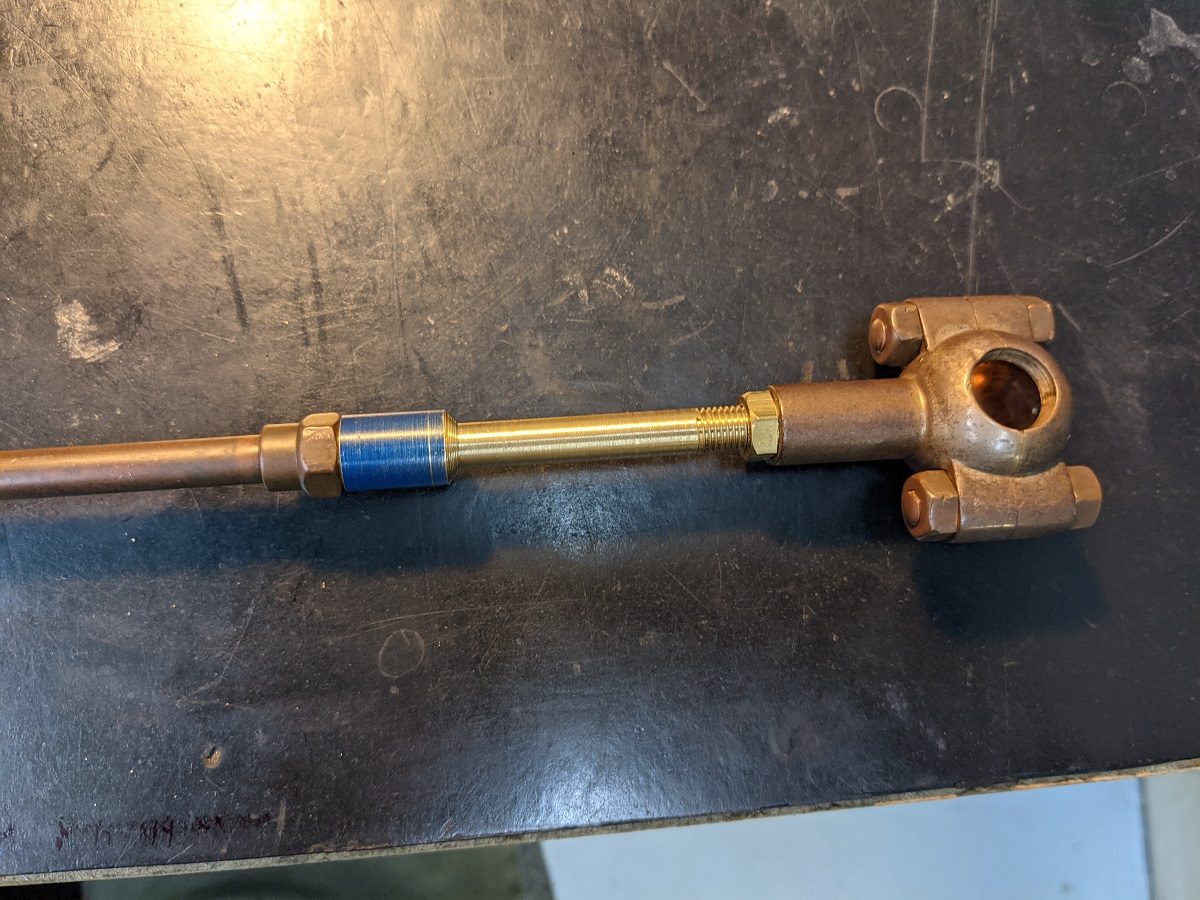 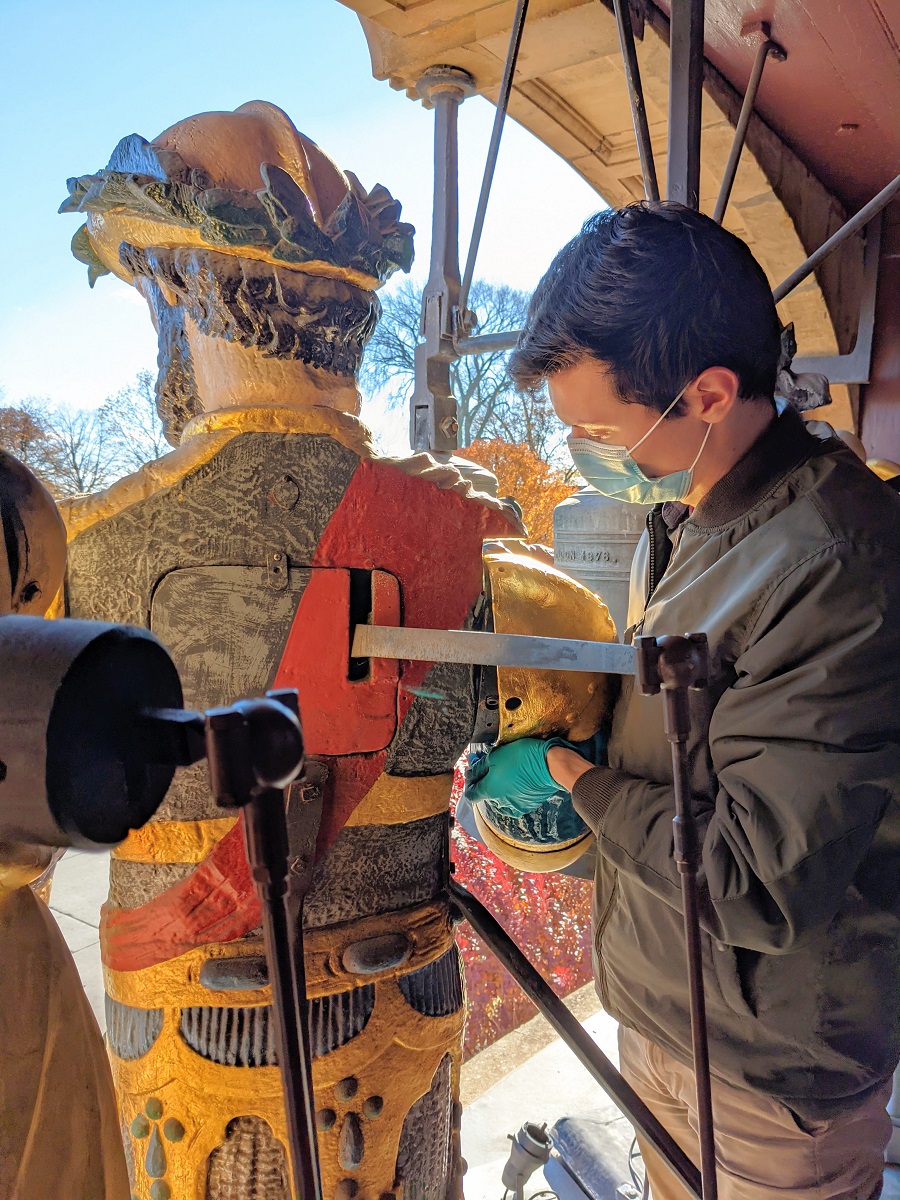 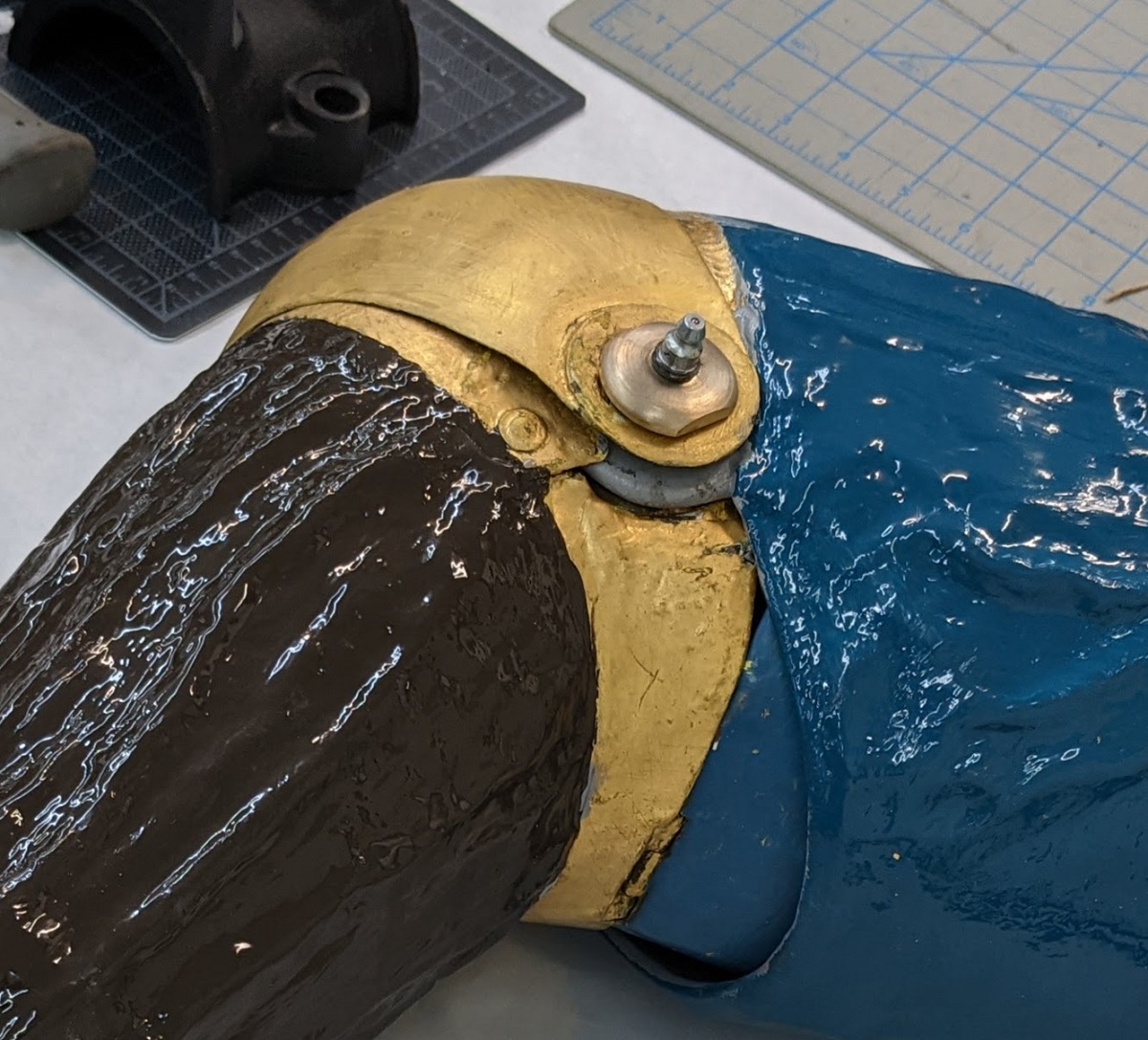 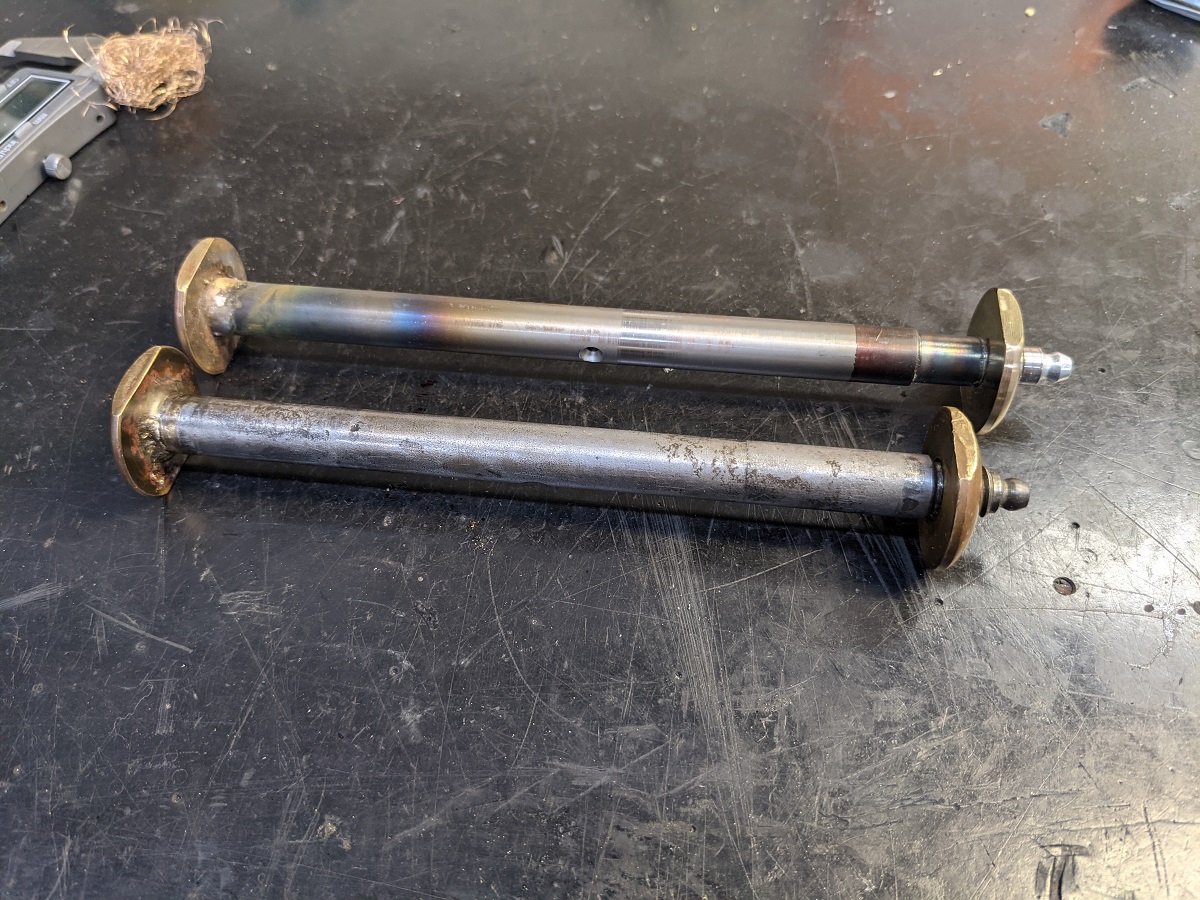 Magog’s clapper for the bell striker required attention by Andrew and The Henry Ford’s welder Chuck Albright, who soldered the joint between the cuff, wrist, and grip for the strike (hammer). A vibration isolator (made from Sorbothane) was inserted to reduce shock between the clapper and the arm during operation. 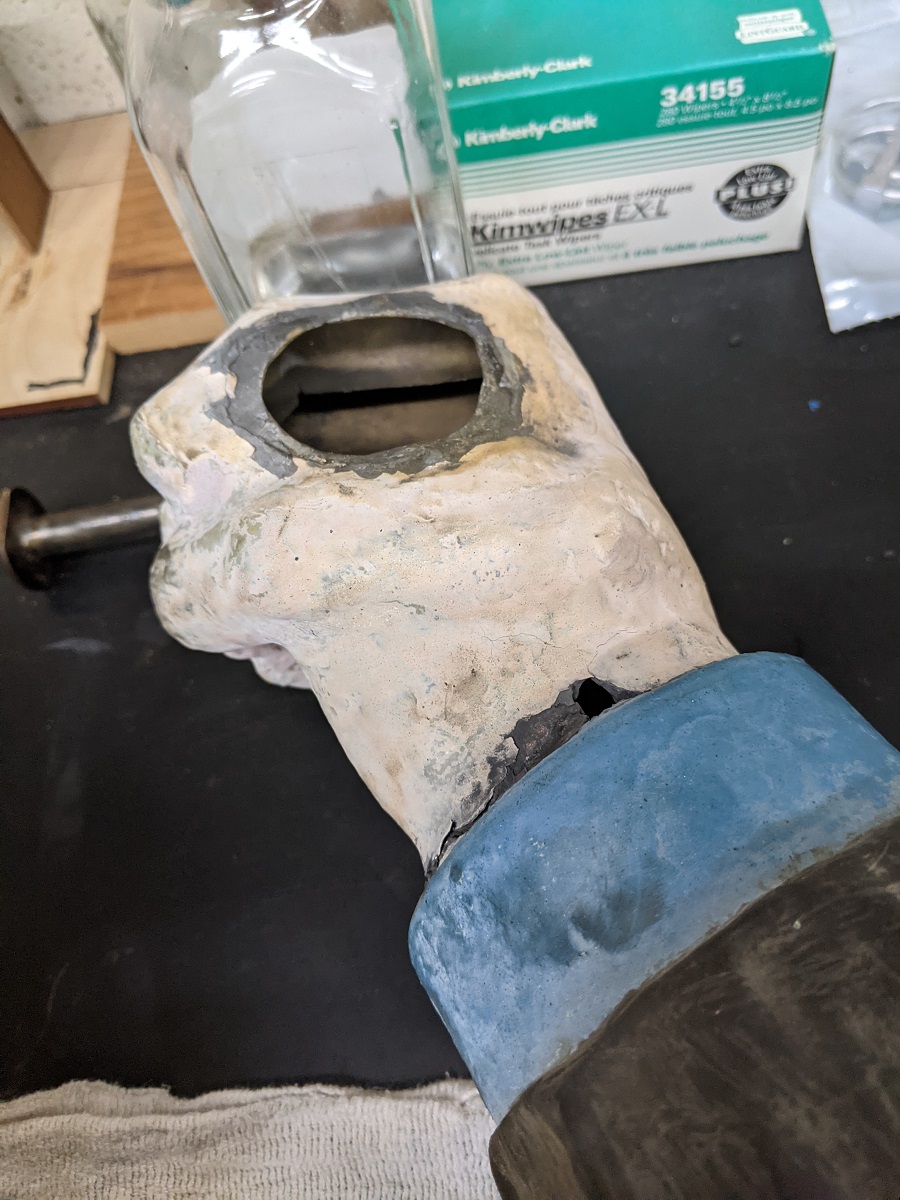 Separation between the hand and the wrist. / Photo by Cuong Nguyen. 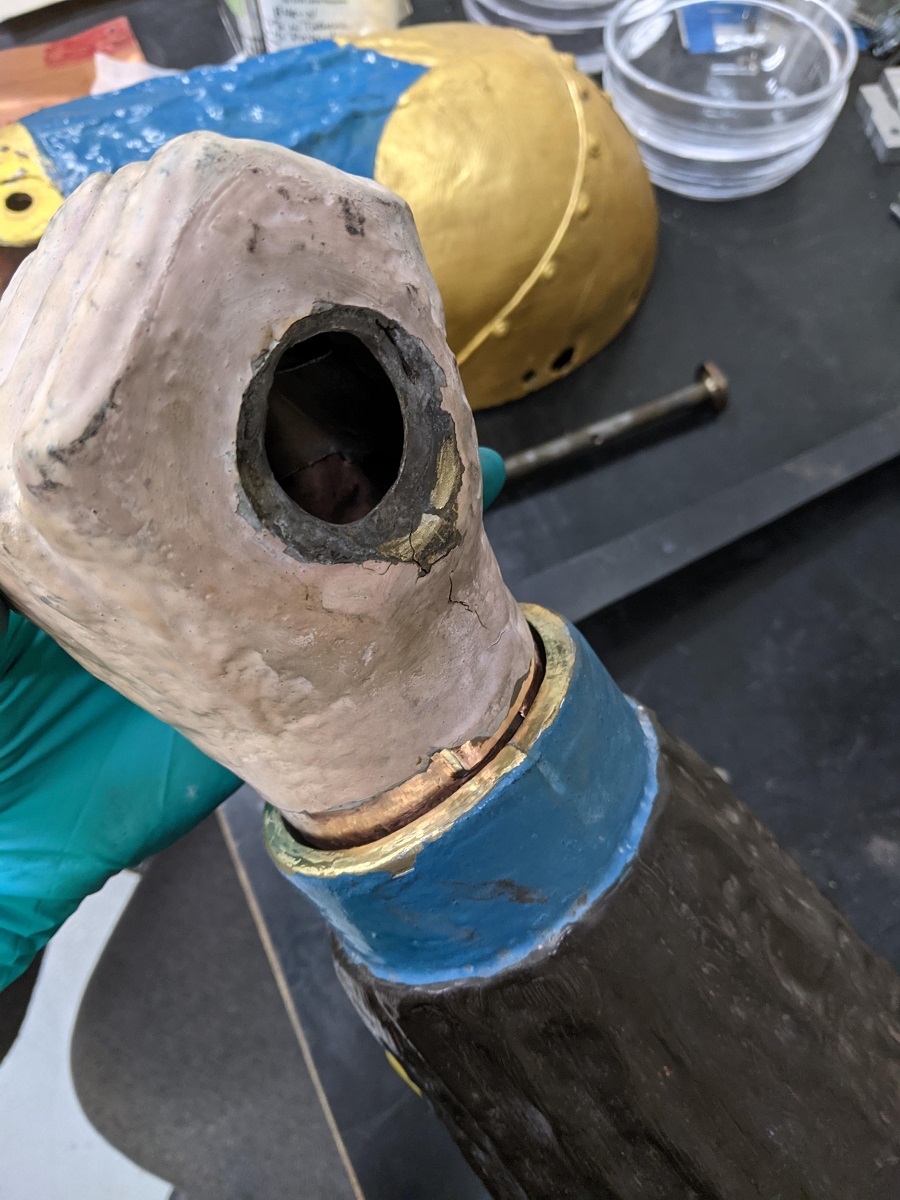 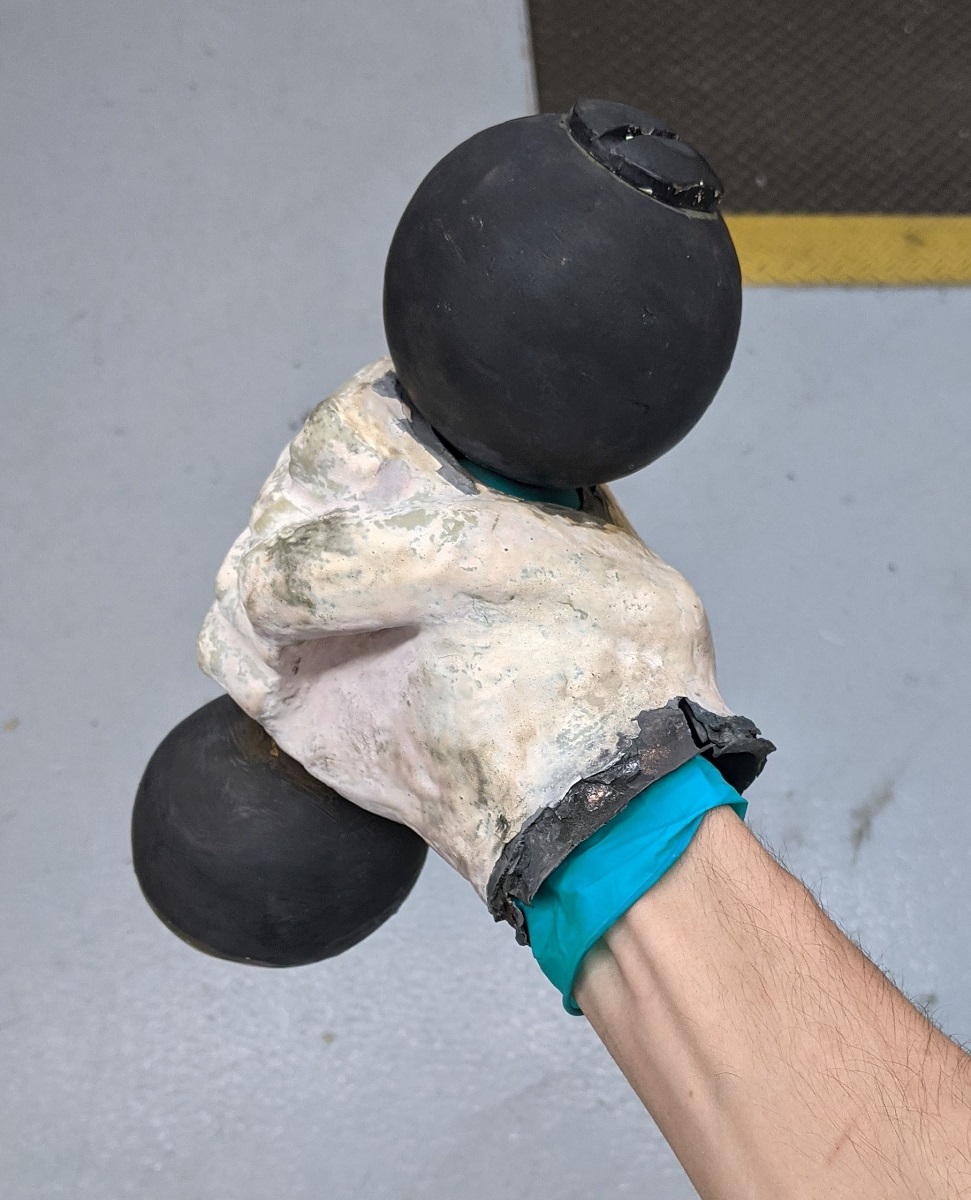 The size of the fist. / Photo by Andrew Ganem.

Special thanks to Dr. Mark Nichols, Dr. George Luckey, Erik Riha, Daniel Johnson, and Kevin Lesperance at Ford Motor Company, and to Daniel Corum and Andrew Wojtowicz at PPG. The help from Ford Motor Company specialists and their fabrication equipment made the project possible without invasive modifications to the artifact part.

We also extend a grateful thank you to Jason Hayburn, whose generous donation funded the electroforming of the replica.


Cuong T. Nguyen is Objects Conservator at The Henry Ford.