Silence = Death: The Early Fight Against the AIDS Epidemic

June 25, 2021 Archive Insight
On what would have been Larry Kramer's 86th birthday, we look at the history of the iconic Silence = Death poster and the pioneering ACT UP organization—the political action group that Kramer catalyzed. Four decades into the AIDS crisis, and during this year's Pride Month celebrations, The Henry Ford recognizes the tireless advocates who have fought and continue to fight, refusing to stay silent, for equitable treatment for those in the LGBTQ+ community.

On July 3, 1981, the New York Times published an article that would send shockwaves through the LGBTQ+ community across the country. Headlined “Rare Cancer Seen in 41 Homosexuals,” the article, which appeared not on the first page, but on page A20, reported the death of eight individuals, and that the cause of the outbreak was unknown. For LGBTQ+ individuals living in the affected areas, the article was more a confirmation of their fears than new information. And for many heterosexual people, it sparked trepidation and deepened discrimination against the LGBTQ+ community. Other smaller publications had published articles in the months preceding July 1981, and Morbidity and Mortality Weekly Report, from the U.S. Center for Disease Control (now known as the Centers for Disease Control and Prevention), documented early cases of the epidemic in June. In the gay community, friends and loved ones were getting sick and many were dying. The alarm bell had been rung. 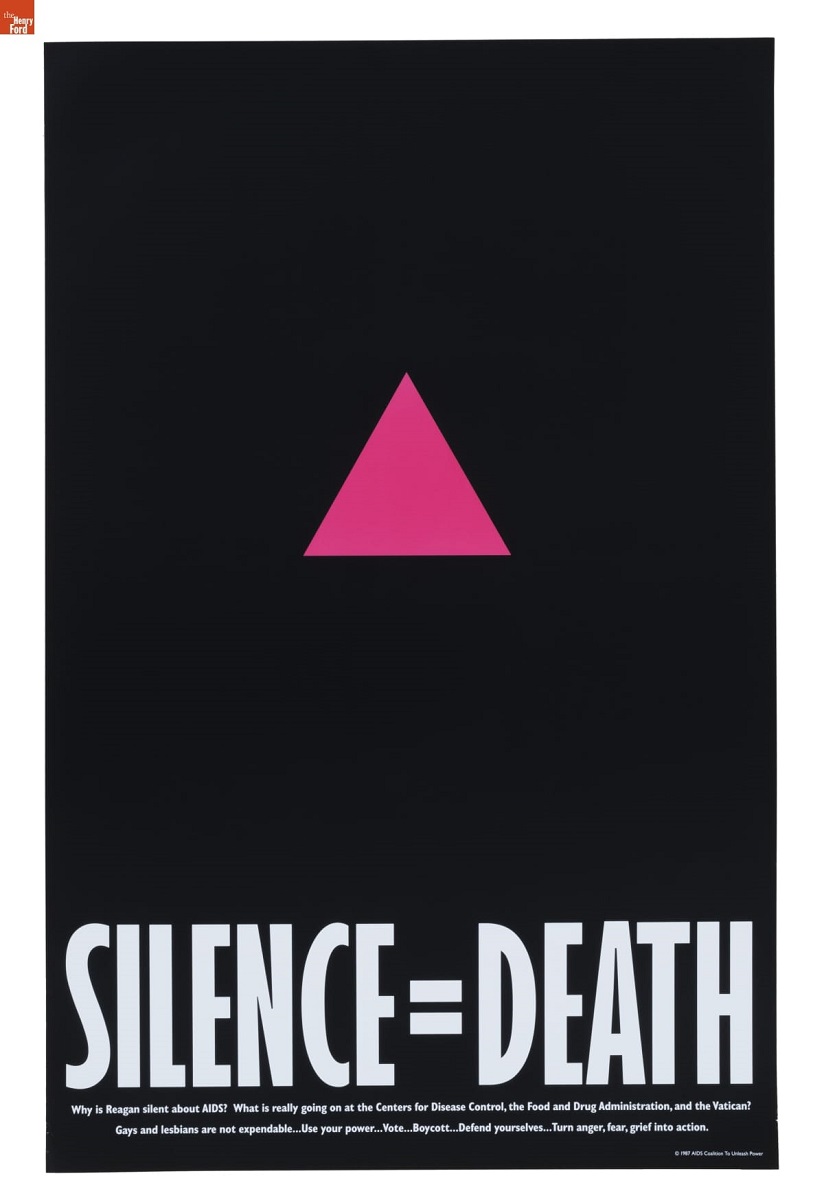 The Silence = Death Collective designed this poster prior to the formation of the ACT UP organization, but transferred ownership to ACT UP in 1987. / THF179775

The Silence = Death poster has come to symbolize the early fight against the AIDS epidemic. It was borne of deep grief and an unrelenting desire for action. One evening in late 1985, after the loss of his partner from AIDS in November 1984, Avram Finkelstein met with Jorge Socarras and Oliver Johnston in a New York City diner to catch up. Although the AIDS epidemic was a constant, tumultuous undercurrent in the gay community in the mid-1980s, the topic was often coded or avoided. That night, Finkelstein recalls, AIDS was all the men discussed, which he found “exhilarating after so many years of secrecy.” They decided to form a collective, each agreeing to bring one additional person to their next meeting. Chris Lione, Charles Kreloff, and Brian Howard joined. These six men met regularly to discuss the epidemic’s impact on their lives—and to process, rage, mourn, and, eventually, strategize. Finkelstein illustrates these meetings in his book After Silence: A History of AIDS through Its Images: “There were animated conversations, always, and there was often hilarity. We were almost never mean, but we frequently fought. There was shouting, there was fist pounding, and occasionally tears…. Fear may have been the canvas for our conversations. But anger was definitely the paint.”

These conversations turned to action. Each of the men had an artistic background—the group was comprised of art directors, graphic designers, and a musician. They decided to create a political poster, hoping to inspire action from the community’s fear. According to Finkelstein, “the poster needed to simultaneously address two distinctly different audiences, with a bifurcated goal: to stimulate political organizing in the lesbian and gay community, and to simultaneously imply to anyone outside the community that we were already fully mobilized.” The group spent six months designing the poster—debating everything from the background color to the text before deploying the poster all over Manhattan by March of 1987.

The poster’s central graphic element is a pink triangle. It references and reclaims the pink triangle patches on concentration camp uniforms that homosexual men were forced to wear by the Nazi regime during World War II (lesbian women were given a black triangle). The pink triangles subjected the men to added brutality. The poster’s triangle is inverted, however, from the one used during the Holocaust. This was initially a mistake. Chris Lione had recently been to the Dachau concentration camp and recalled that the pink triangle he saw on exhibit pointed upward. However, the collective embraced the accident once it was discovered, reasoning that the inverted triangle was “superimposing an activist stance by borrowing the ‘power’ intonations of the upwards triangle in New Age spirituality.” The expansive black background created a meditative negative space that further emphasized the bright pink triangle and the white text below.

The tagline for the poster—“SILENCE = DEATH”—was quickly developed. It also soon became the name of the men’s group: the Silence = Death Collective.  The equation references the deafening silence of the public and government-at-large—the New York Times didn’t give the AIDS crisis front-page coverage until 1983; President Ronald Reagan’s administration made light of the epidemic in its early years (the administration’s press secretary jokingly referred to the epidemic as the “gay plague” in 1982); and President Reagan didn’t address the AIDS epidemic publicly until September of 1985. The tagline also targeted the LGBTQ+ community, whose uncomfortable silence came at ultimate risk. Without discussion, education, and action about the AIDS crisis, many more people would die. By the end of 1987, over 47,000 people had already died of AIDS. Silence—quite literally—equaled death. 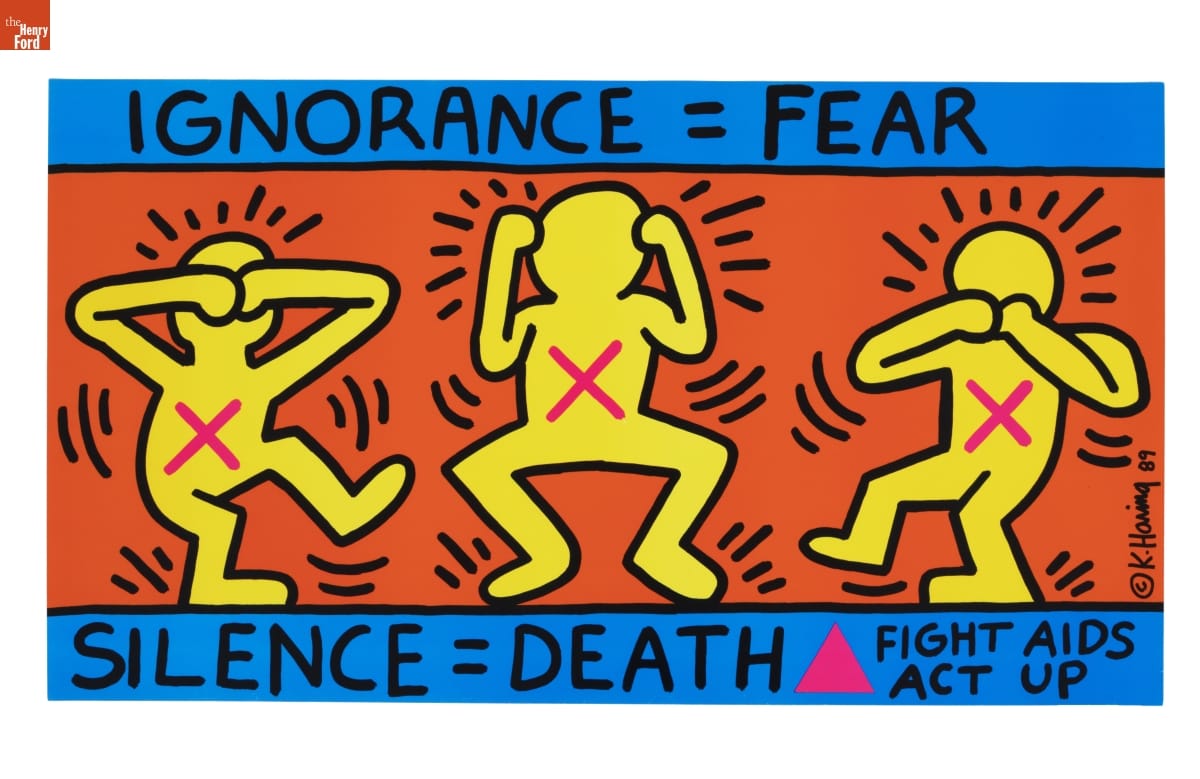 Artist and activist Keith Haring designed this poster, titled “IGNORANCE = FEAR, SILENCE = DEATH Fight AIDS ACT UP,” in 1989 for the ACT UP organization. It utilizes the “Silence = Death” tagline and the inverted pink triangle symbol initially created by the Silence=Death Collective.  / THF179776

The Formation of ACT UP (AIDS Coalition to Unleash Power)

At almost the same time that the Silence = Death Collective’s poster began appearing around Manhattan, playwright and activist Larry Kramer gave a legendary lecture at New York’s Lesbian and Gay Community Services Center on March 10, 1987. Kramer famously began this speech by telling the crowd that half of them would be dead within the year (due to the AIDS epidemic). He repeatedly asked the crowd “What are you going to do about it!?!” Kramer’s rage and urgency pushed the crowd towards actionable steps to combat the AIDS crisis. Within days, a group met that would become the AIDS Coalition to Unleash Power—or ACT UP. Around 300 people attended that first meeting, including some of the members of the Silence = Death Collective.

ACT UP quickly mobilized and became the political action group that many in the LGBTQ+ community—including the Silence = Death Collective—had envisioned.  ACT UP was (and still is) “committed to direct action to end the AIDS crisis.” On March 24, 1987, just two weeks after Larry Kramer’s lecture, the group held its first “action” when it protested pharmaceutical price-gouging of AIDS medication on Wall Street. Kramer had published an op-ed in the New York Times the day before, titled “The FDA’s Callous Response to AIDS,” which helped contextualize ACT UP’s protest in the media. ACT UP and its many chapters, subcommittees, and affinity groups kept pressure on the government for its inaction in the AIDS epidemic by frequently staging creative acts of civil disobedience and nonviolent protest.

“We had designed Silence = Death. ACT UP was about to create it,” Finkelstein wrote. The Silence = Death Collective gave the rights for the poster to ACT UP and it became a fundraiser for the organization. When this transition occurred, a few changes were made to the poster, including the correction of some minor errors (the “Food and Drug Administration” had been mistakenly referred to as the “Federal Drug Administration,” for example) and the addition of the “© 1987 AIDS Coalition to Unleash Power” in the bottom righthand corner.

Over the last four decades, AIDS has taken the lives of men, women, and children, without regard to sexual orientation or race. However, the LGBTQ+ community has suffered the bulk of misinformation and discrimination related to the disease and done the difficult work to push direct action to end the AIDS crisis. The work of activists like the Silence = Death Collective, the members of ACT UP, and many others made treatment available to more people and curbed the spread of the disease. ACT UP broadened its mission to the eradication of AIDS at the global level and remains an active organization.