When thinking about the celebrated figures in decorative arts history, one first thinks of individuals like Thomas Chippendale, Duncan Phyfe, and Gustav Stickley in furniture, Paul Revere and Tiffany and Company in silver, and Josiah Wedgwood in ceramics. All these prominent figures have something in common—they all are men. There are few celebrated female leaders in the decorative arts. This may be due to the scholarly focus on great men, to the detriment of women, until recent years. 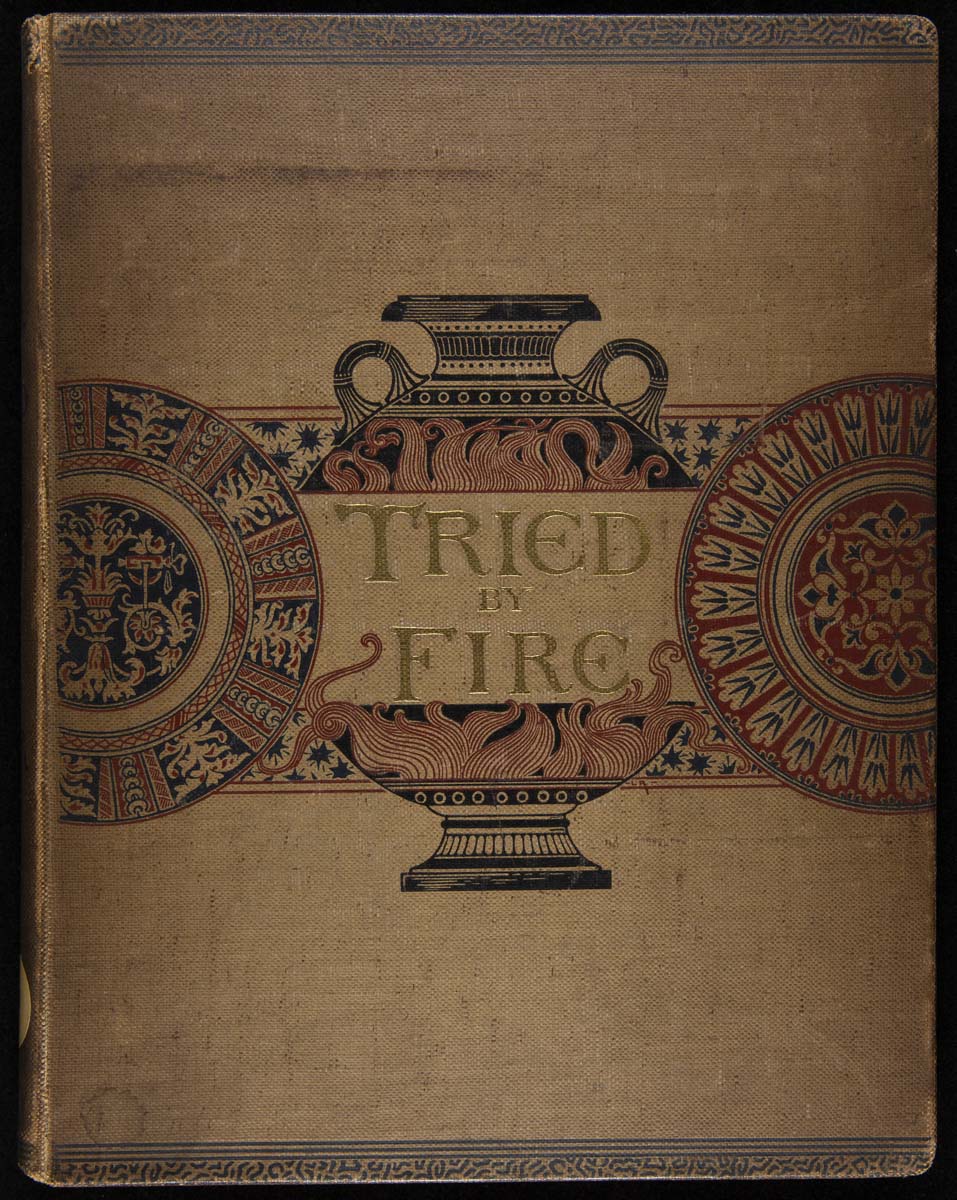 One of the most important and underrecognized women in decorative arts history was Susan Frackelton (1848–1932). She was a founder of the field of women’s china painting in the 1870s and 1880s. She was also a catalyst in transforming that pastime into a profession with the evolution of china painting into art pottery in the 1890s. Unlike her more famous peers, Susan Frackelton earned her living and supported her family on the proceeds of her publishing, teaching, and collaborations with like-minded artists.

Susan Frackelton faced many challenges in her personal and professional life. In many ways, she was a trailblazer for the modern, independent woman. Only in recent years have her contributions been recognized. Like other major figures in the decorative arts, including Thomas Chippendale, she is best remembered for a  publication, her 1886 Tried by Fire. In the introduction, she states, “If the rough road that I have traveled to success can be made smoother for those who follow, or may hereafter pass me in the race, my little book will have achieved the end which is desired.”

Why Was China Painting a Means for Women’s Liberation?

Many factors fueled the growth of amateur china painting in late-19th-century America. As America became wealthier after the Civil War, women of the middle and upper middle classes gained more leisure time for personal pursuits. China painting became a socially acceptable pastime for women because it allowed them to create decorative objects for the home. Further, the influence of the English Aesthetic movement and later the Arts and Crafts movement advocated that the creation of art should be reflected in the home. By the 1870s and 1880s, wealthy women were freer to leave the confines of the home through organizations that they set up to create and exhibit their work.

What Is China Painting? 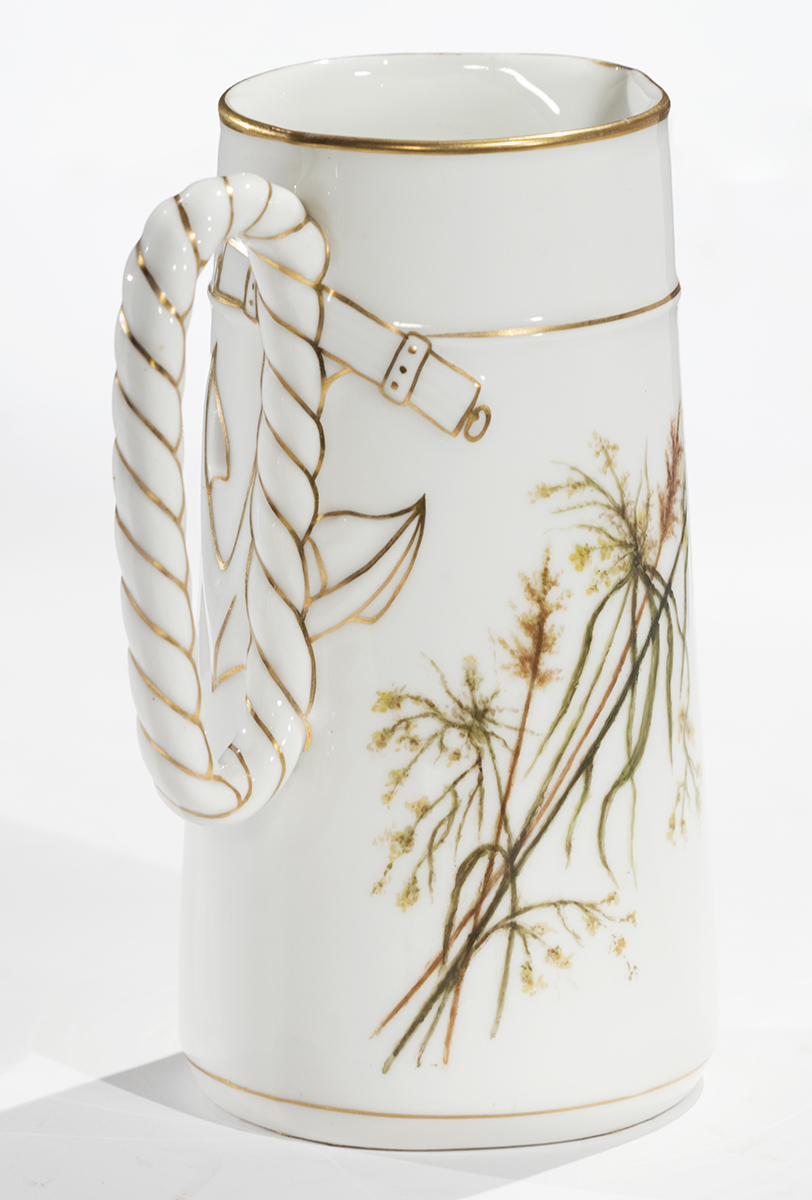 This pitcher is a good example of the work of an amateur china painter. The artist would take a “blank”—a piece of fired, undecorated, white porcelain, in this case a pitcher made by the English firm Haviland—and paint over the glaze. These blanks could be purchased in multiples at specialty stores. One of the most prominent of these was the Detroit-based L.B. King China Store. It was founded in 1849 and closed during the Great Depression, about 1932. According to a 1913 advertisement, the retailer sold hotel china, fine china dinnerware, cut glass, table glassware, lamps, shades, art pottery, china blanks, and artists materials. Elbert Hubbard, founder and proprietor of the Roycrofters, a reformist community of craft workers and artists that formed part of the Arts and Crafts movement, wrote enthusiastically about the products of the L.B King China Store: “The store is not only a store—it is an exposition, a school if you please, where the finest displays of hand and brain in the way of ceramics are shown.” A woman seeking to learn about china painting could literally walk into the L.B. King Store and walk out with paints, blanks, and a manual like Frackelton’s Tried by Fire and start painting her own china.

The pitcher above is part of a large group of serving pieces in our collection. Also in our collections is a full set of china decorated by a young woman and her friends who learned china painting at what is now Michigan State University. They decorated the dinnerware service in preparation for the young woman’s wedding in 1911. According to family history, the young woman purchased the blanks at the L.B. King Store.

How Did China Painting Evolve in the Late 19th Century?

During the 1870s, Cincinnati was the center of American china painting. The movement was led by two wealthy women, Maria Longworth Nichols (1849–1932), who later founded the Rookwood Pottery, and her rival, Mary Louise McLaughlin (1847–1939). Both studied with European male ceramic artists who had made their way to Cincinnati. Both evolved from amateur status into extraordinary artists, who moved from painting over the glaze to learning how to throw and fire their own vessels, create designs, and formulate glazes for their vessels. This all occurred during the late 1870s, following a display of ceramic art at the Women’s Pavilion of the 1876 Centennial Exhibition in Philadelphia. Both sought to outdo each other in the formulations of glazes. It is generally believed McLaughlin was the first to learn the technique of underglaze decoration, although Nichols later claimed that she was the first to do so. Nichols’ most important achievement was in creating the Rookwood Pottery in Cincinnati in 1880. It was essentially the first commercial art pottery company in America, and it led the way in the development of new techniques that were widely imitated by other firms. Rookwood and its competitors began to hire women to decorate ceramics, opening a new livelihood for women less well off than Nichols and McLaughlin. 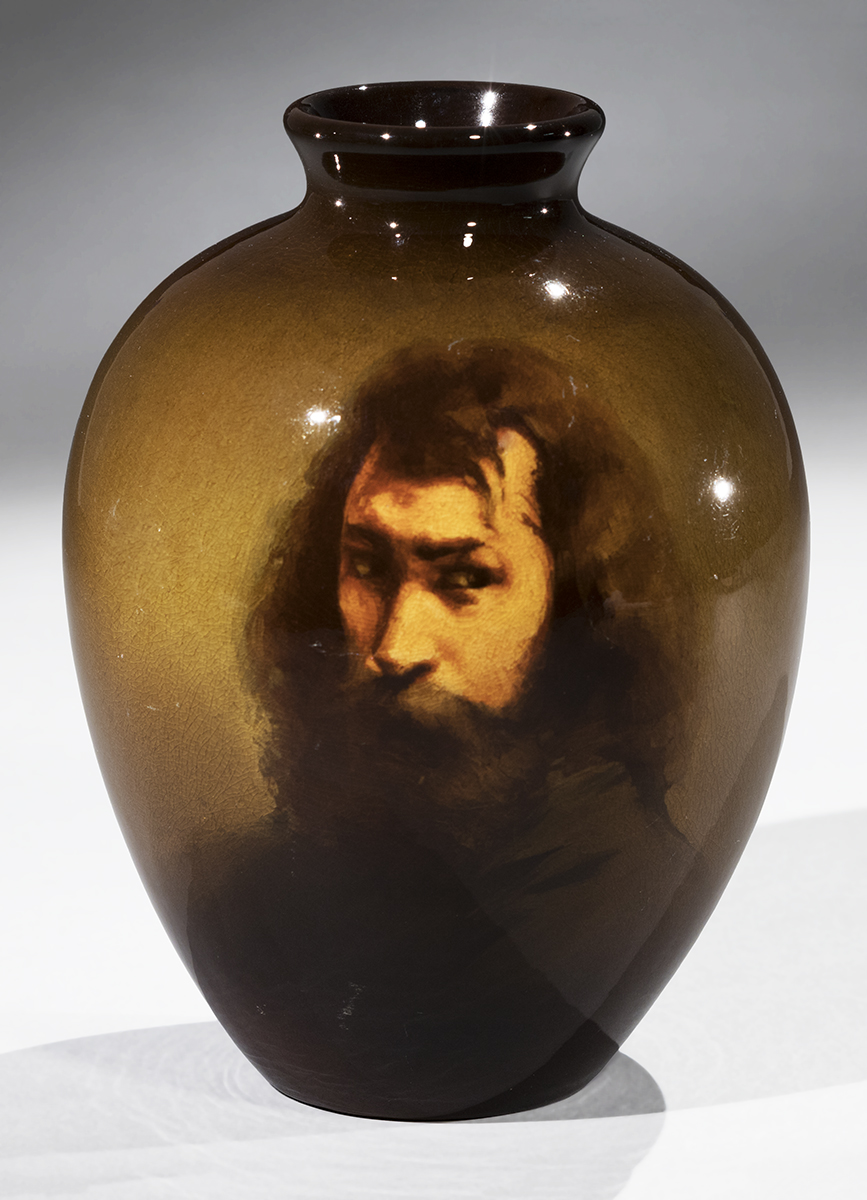 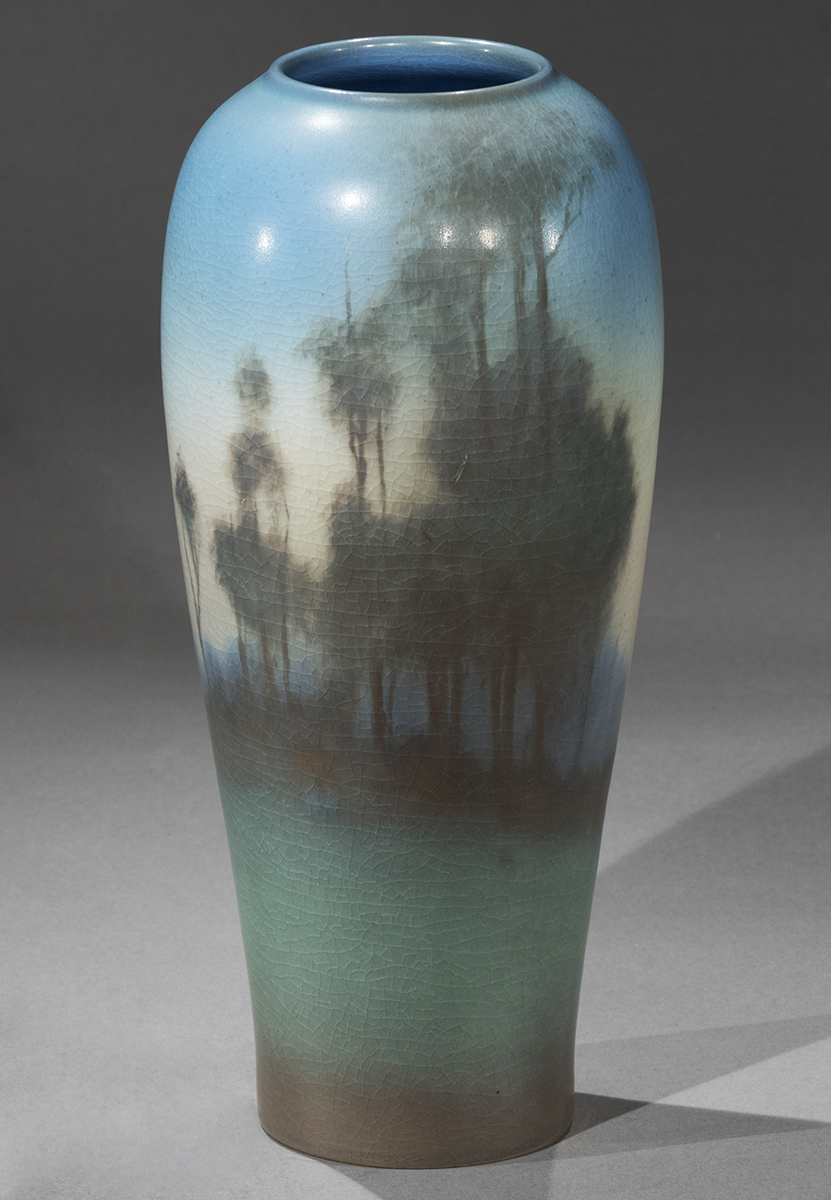 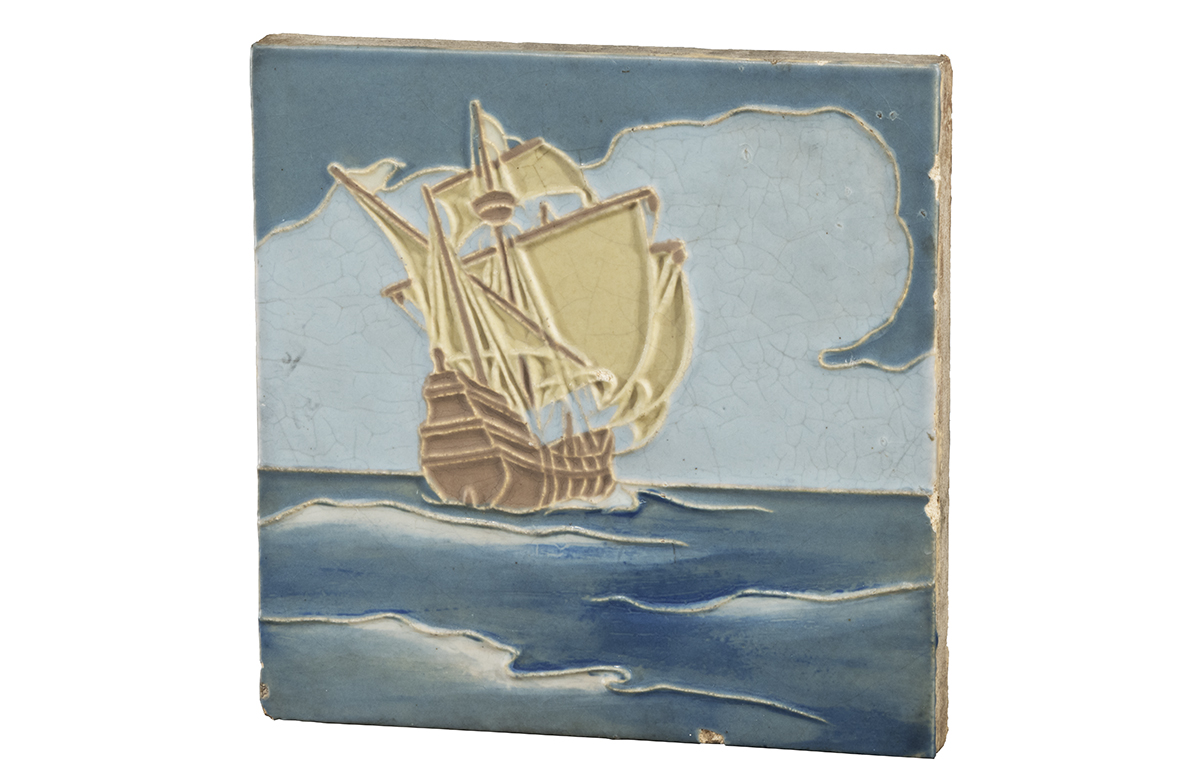 Essentially, through the pastime of china painting, a new industry, art pottery, came into being by 1900. Under the influence of popular magazines like the Ladies’ Home Journal and House Beautiful, Americans eagerly acquired art pottery. In fact, tastemakers like the young architect Frank Lloyd Wright filled his houses with art pottery. He considered it very much part of his total aesthetic. Through the first three decades of the 20th century, art pottery was considered a must in any well-furnished American home. It only fell out of fashion in the 1930s, when the Great Depression drastically altered lifestyles.

How Does Susan Frackelton’s Story Fit into All of This?

Susan Stuart Goodrich Frackelton was a contemporary of both Maria Longworth Nichols and Mary Louise McLaughlin, born in 1848 like Maria Longworth Nichols, and just a year older than Mary Louise McLaughlin. Unlike either of these women, she came from a modest background. Her father was a brick maker in Milwaukee, and she was raised in a middle-class environment. Susan began her artistic career studying painting with the pioneer Wisconsin artist Henry Vianden. In 1869, she married Richard Frackelton and eventually raised three sons and a daughter.

Richard’s business was importing English ceramics and glass and was relatively successful. Within a few years, however, the business began a sharp decline and Susan stepped in to help. She later said that she learned about American taste in ceramics and business while working with her husband. Concurrently, she began to experiment with china painting, applying her experience in painting with Henry Vianden. She was essentially self-taught, unlike her contemporaries in Cincinnati. Through publications, she was aware of what was going on in the field. She was also aware of the innovations of Mary Louise McLaughlin in glazes, and by the late 1870s was experimenting in underglaze painting herself. 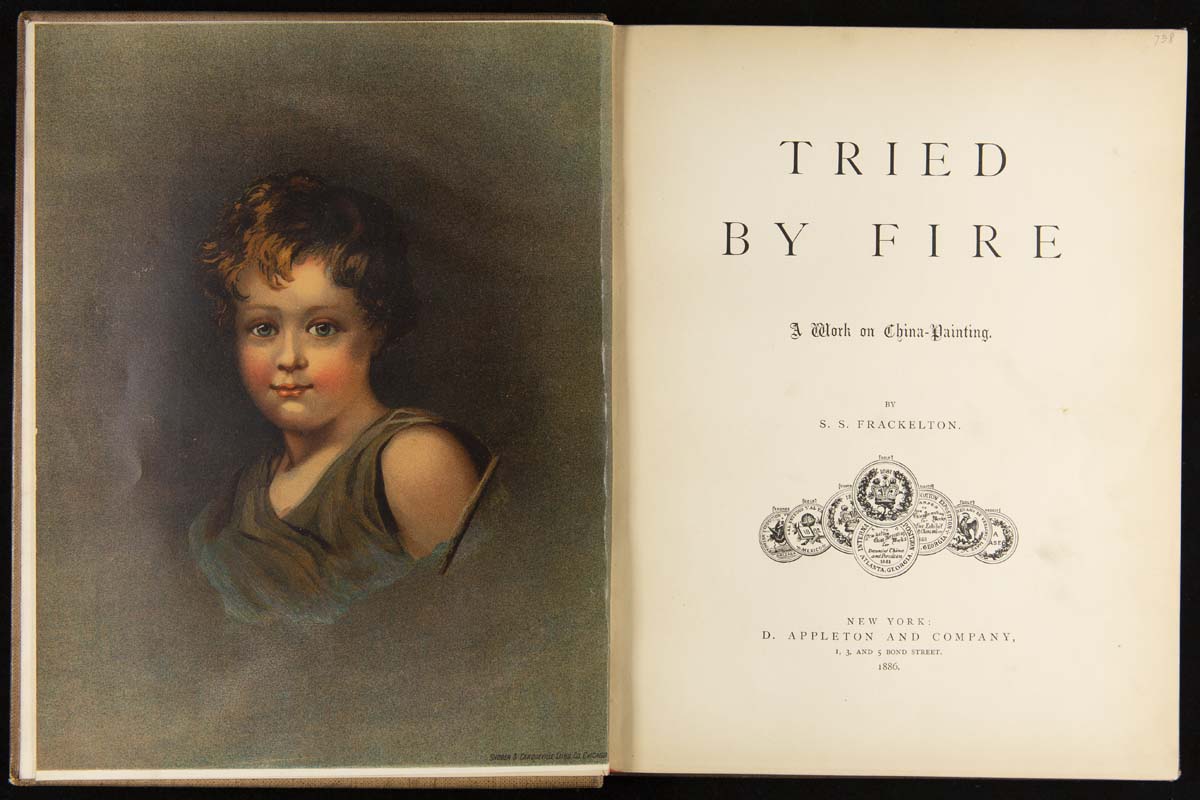 Frackelton made a national name for herself in 1886 with the publication of Tried by Fire. It differed from other manuals for china painters in that it was written by a teacher for beginning students. Frackelton’s conversational style and advice on not expecting too much too soon appealed to readers and the book became a best seller, reprinted in two revised editions in 1892 and 1895. As a teacher, Frackelton had no equal in the world of art pottery. She advocated that both wealthy and poor women could enjoy the art of china painting: “Beauty is the birthright of the poor as well as the rich, and he lives best who most enjoys it.” 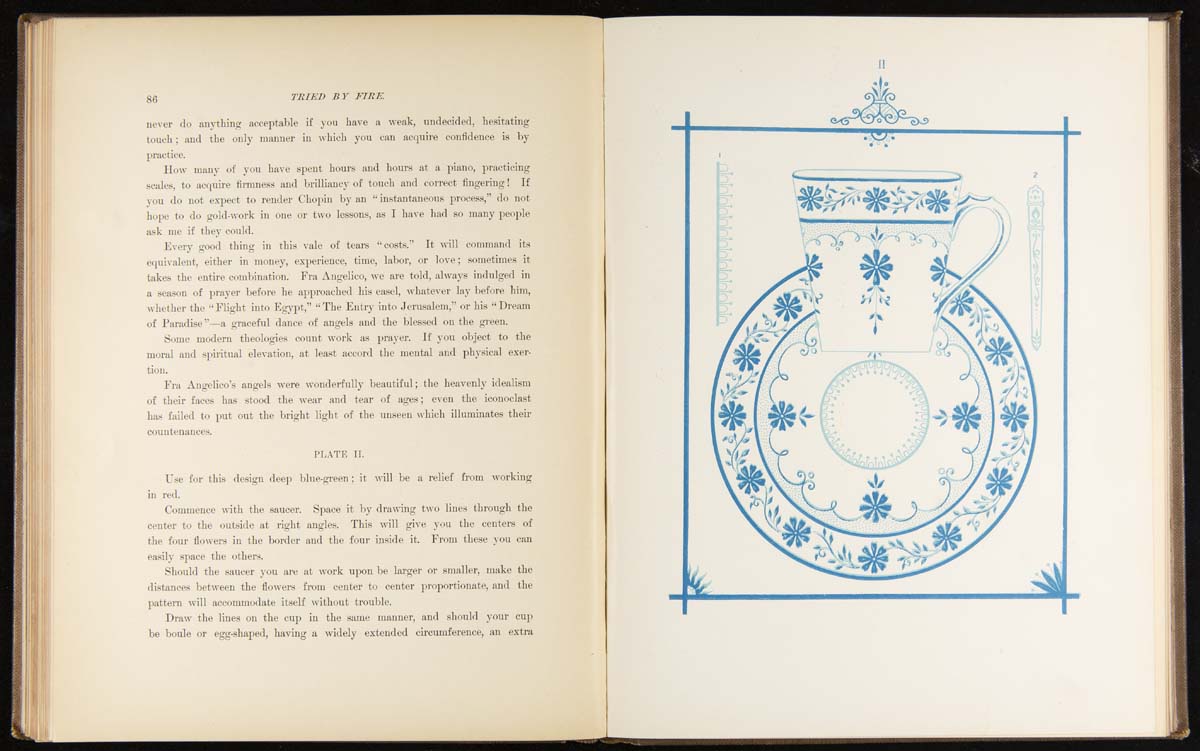 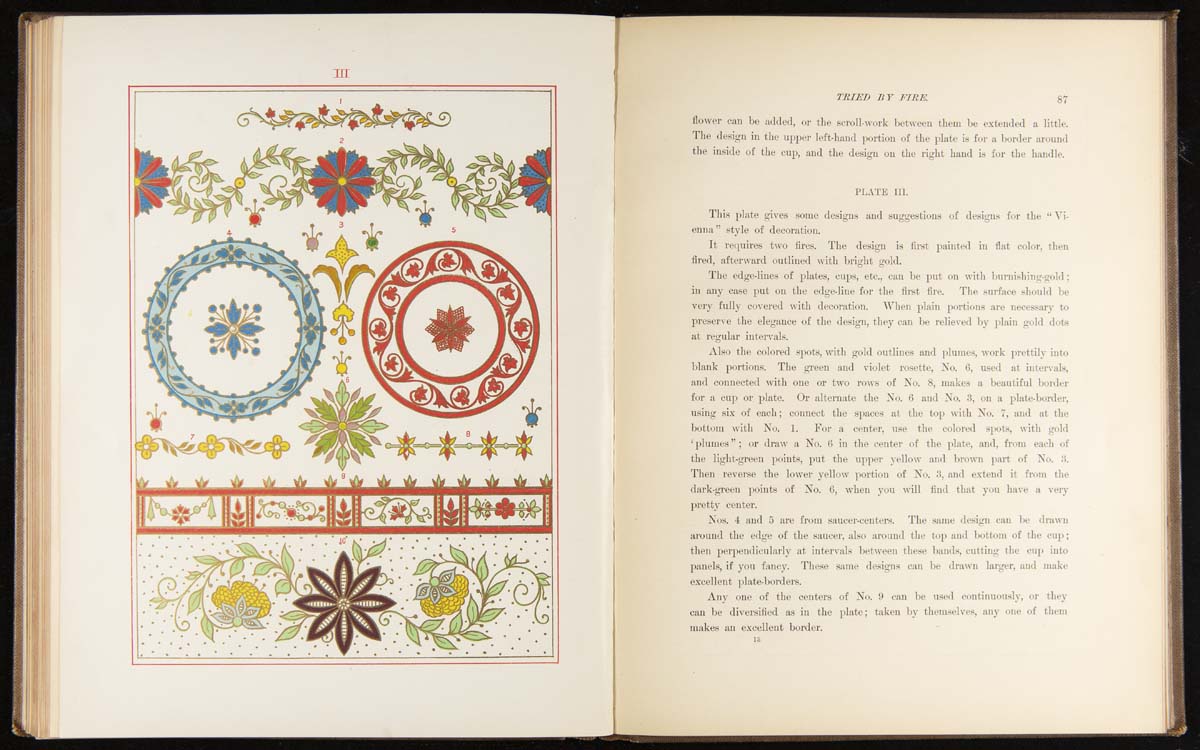 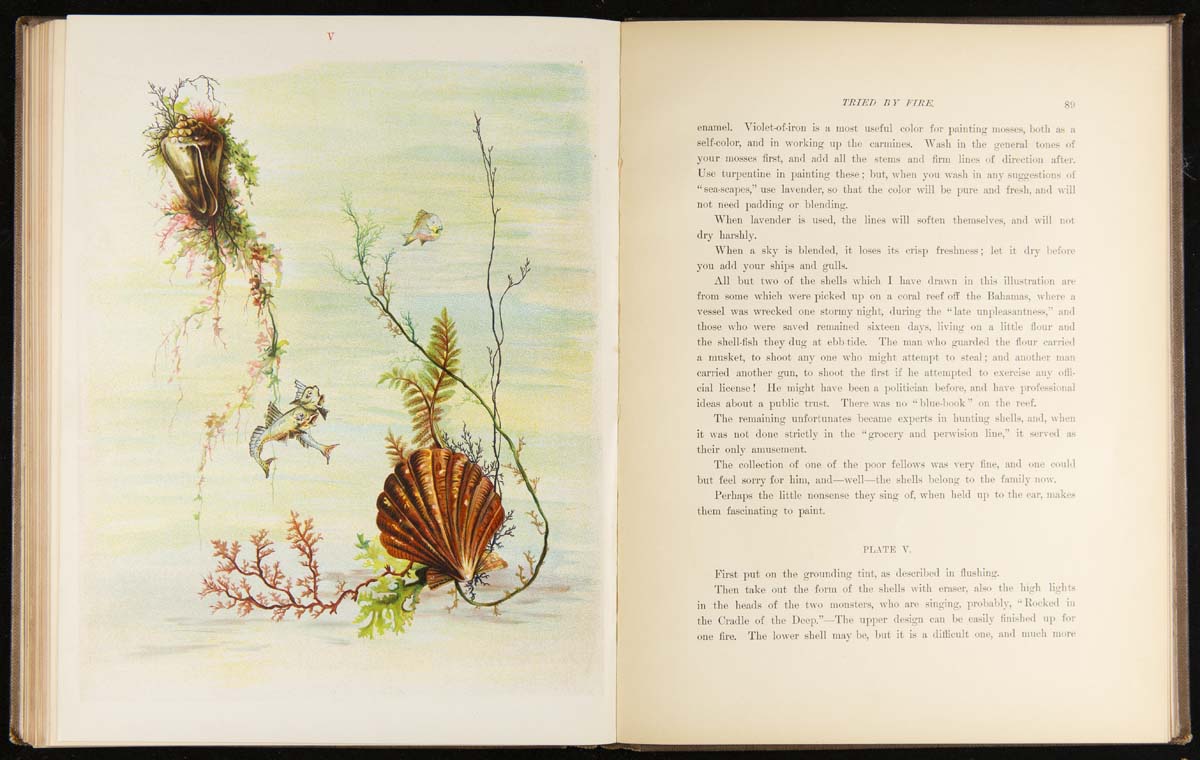 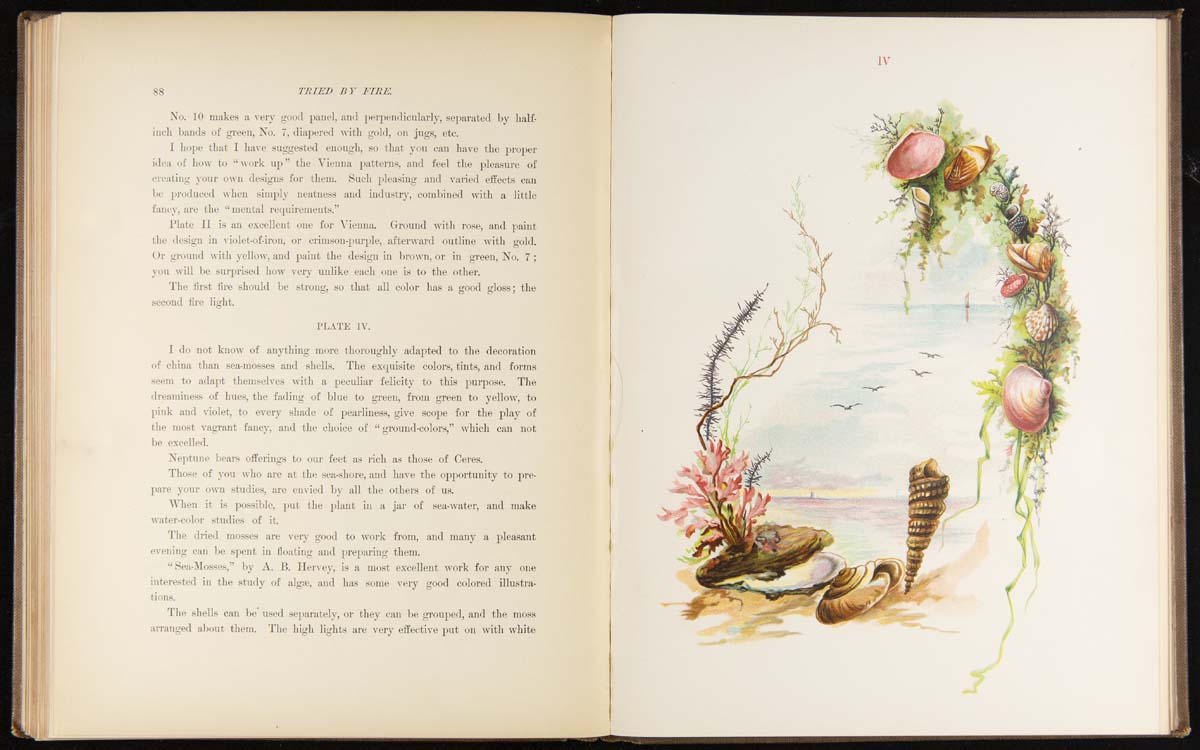 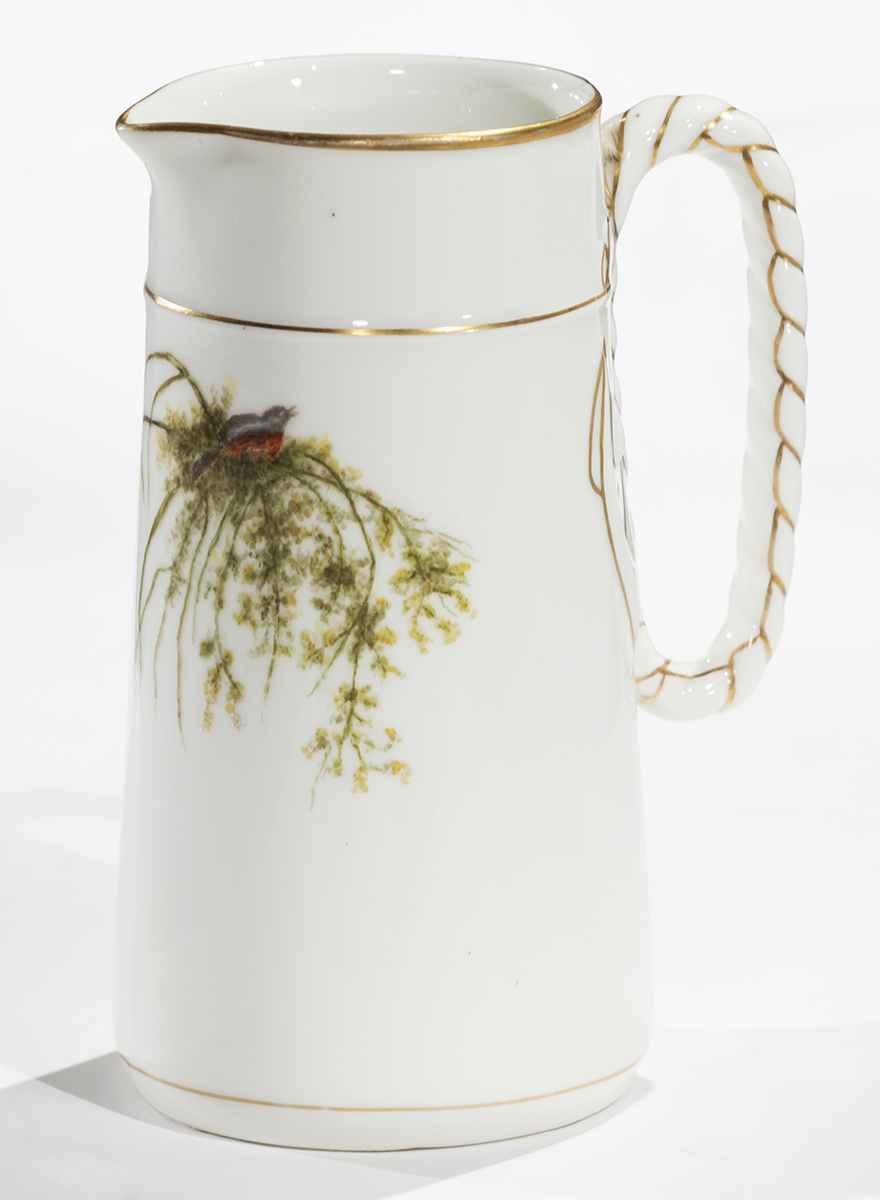 Pitcher, 1890–1910, decorated by an amateur china painter. Note that the botanical decoration on this pitcher is similar to the Tried by Fire color plates. / THF176879

Another major innovation was the development of a patented gas-fired kiln, first offered in the advertising section of Tried by Fire. By 1888 she was granted a second patent for a new and improved version. 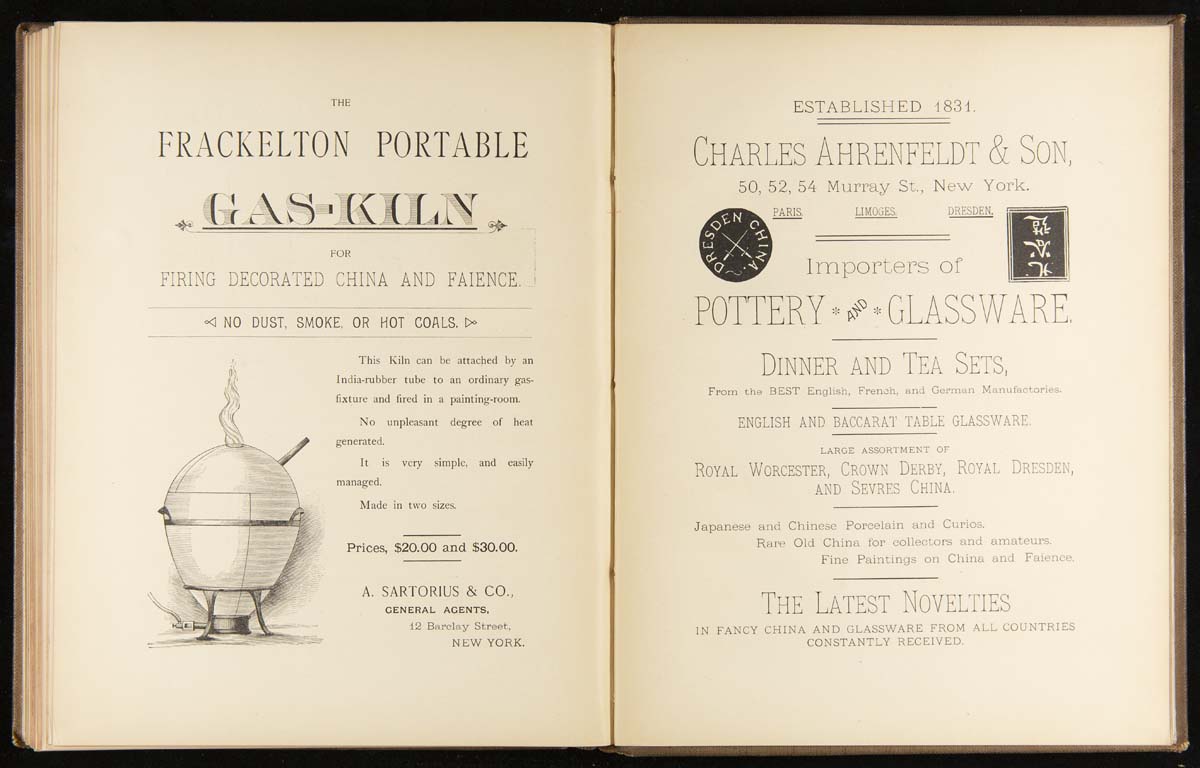 By 1890 Frackelton was a well-known figure and was noted for displaying her work in international exhibits. In 1893 she won eight awards for her work in a competition held at Chicago’s World’s Columbian Exposition. Additionally, she became renowned for her work in a variety of ceramic media, especially for her blue and white salt-glazed stoneware. She also worked to create new and easier-to-use paints for decoration. She went so far as to organize the National League of Mineral Painters in 1892, an organization “aimed to foster a national school of ceramic art and provide a link between china painters throughout the country.”

By the late 1890s, Frackelton’s reputation was secure, as were her finances. In 1897 she divorced Richard Frackelton and moved to Chicago and spent much of her time lecturing and promoting ceramic art. She collaborated with several ceramic artists, including the now famous George Ohr, a unique artist who called himself “the mad potter of Biloxi.” Together, they created several highly unusual pieces, now in the collections of the Wisconsin Historical Society.

In her later years, Frackelton moved away from working in ceramics, preferring to return to painting and working as an illuminator of manuscripts. However, Frackelton’s promotion of the ceramic arts made her one of the most admired female artists in America in the first decade of the 20th century. Susan Frackelton was a remarkable figure in American ceramics, justifiably earning her status as one of the prominent figures in the decorative arts and certainly in broadening the role of women in American society.


Charles Sable is Curator of Decorative Arts at The Henry Ford. Many thanks to Sophia Kloc for editorial preparation assistance with this post.