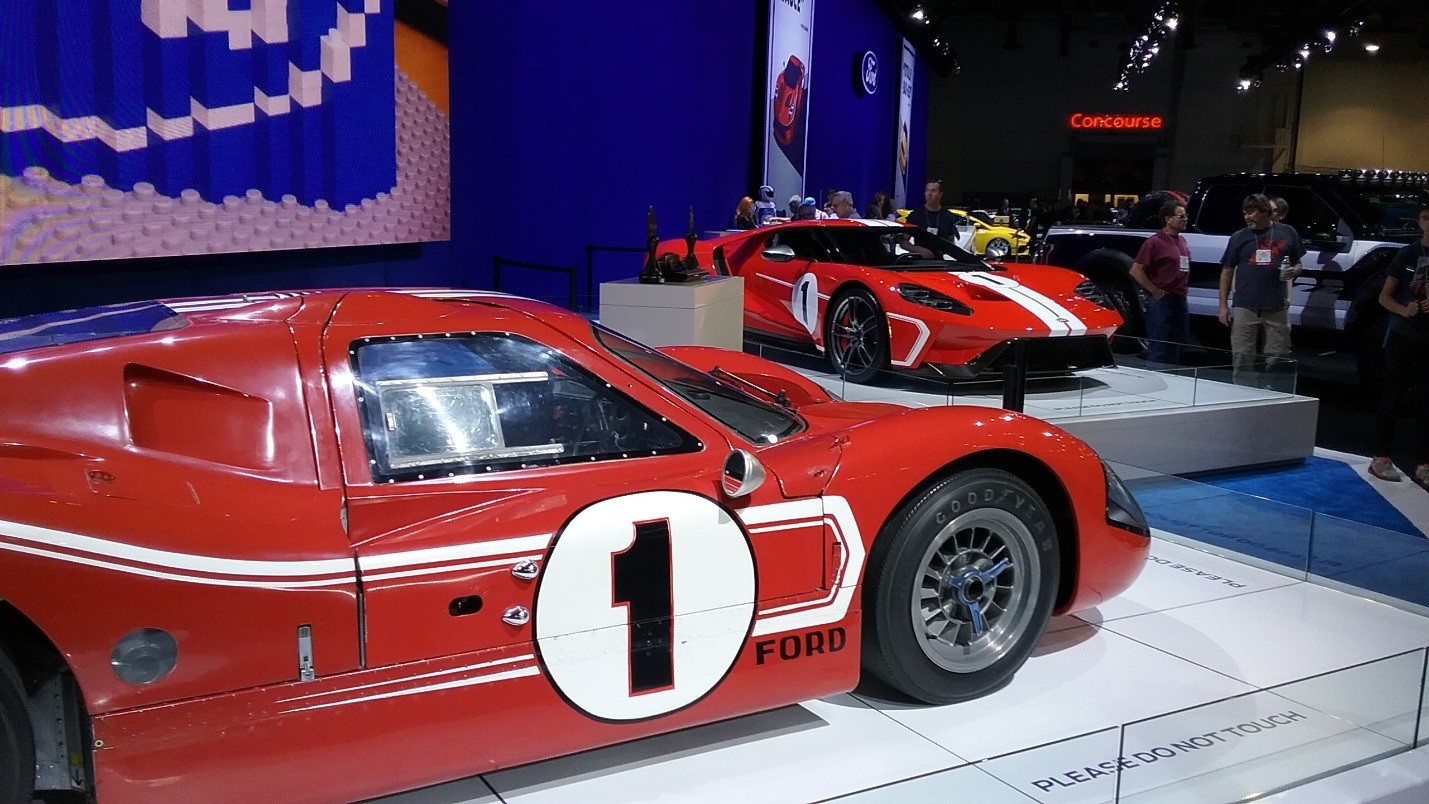 It’s been a busy couple of years for our 1967 Ford Mark IV. In the last 24 months, the car traveled to England, France, California and, most recently, Nevada. Race fans have welcomed the car at each stop, excited to see it 50 years after its Le Mans win with Dan Gurney and A.J. Foyt. The car’s trip to the Silver State coincided with this year’s SEMA Show, presented by the Specialty Equipment Market Association from October 31-November 3 in Las Vegas.

The SEMA Show is among the largest automotive trade shows on the calendar. It brings together original equipment manufacturers, aftermarket suppliers, dealers, restoration specialists and more. SEMA draws some 2,400 exhibitors and 160,000 people (all of them industry professionals – the show isn’t open to the public) to the Las Vegas Convention Center each year. You’ll find a bit of everything spread over the show’s one million square feet of exhibit space: speed shop equipment, specialty wheels and tires, seats and upholstery, car audio systems, paints and finishes, motor oils and additives – basically, anything that makes a car run, look, sound or feel better. 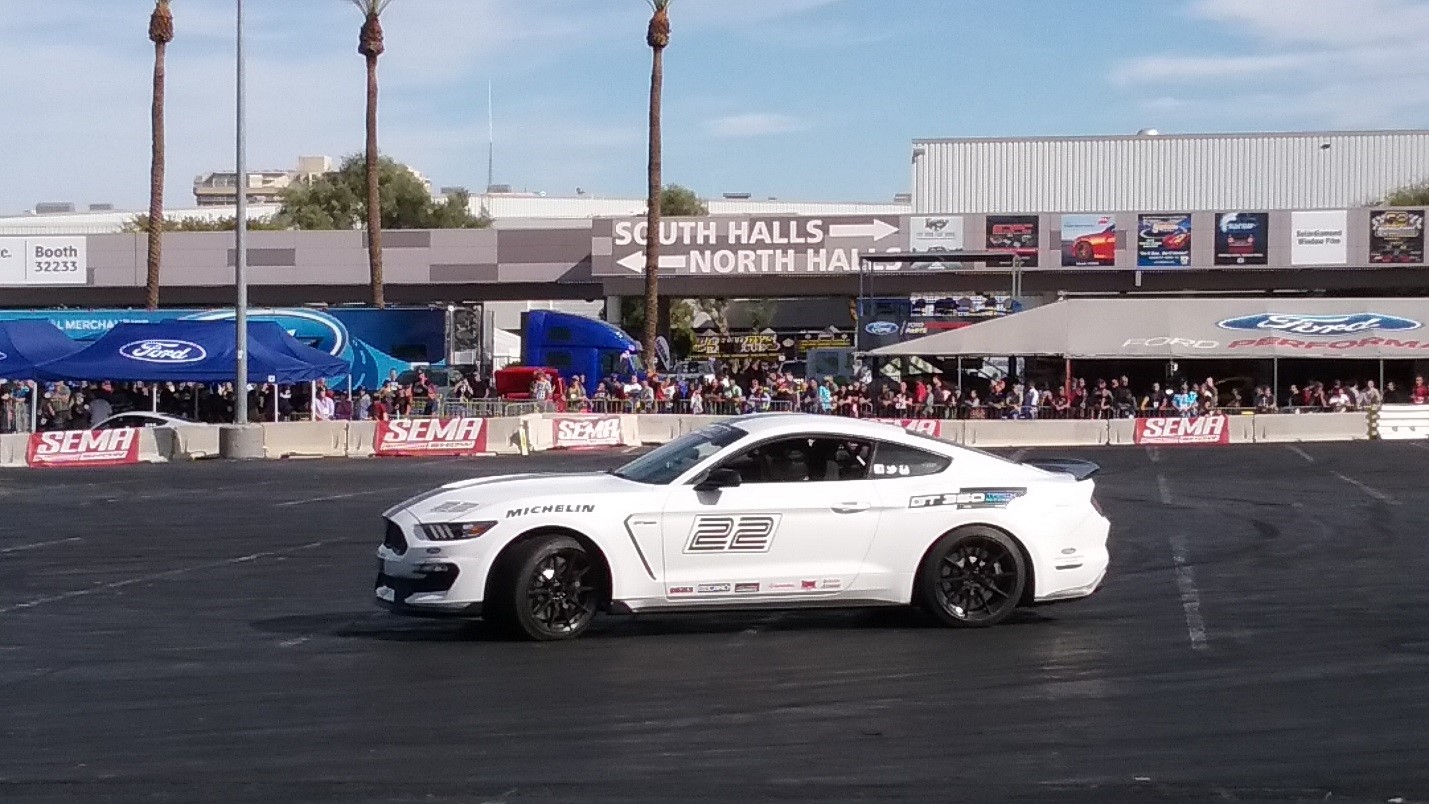 Our Mark IV was given an honored place in Ford Motor Company’s main exhibit, where it was paired with the 2018 GT Heritage Edition that pays tribute to the Gurney/Foyt win. Ford’s exhibits continued outside the Convention Center in the “Ford Out Front” area. Jersey barriers formed an impromptu track in the parking lot, where attendees could ride with a professional driver in a Mustang GT350, a Focus RS, or an F-150 Raptor. Believe me, you haven’t seen drifting until you’ve seen it done with a pickup truck. 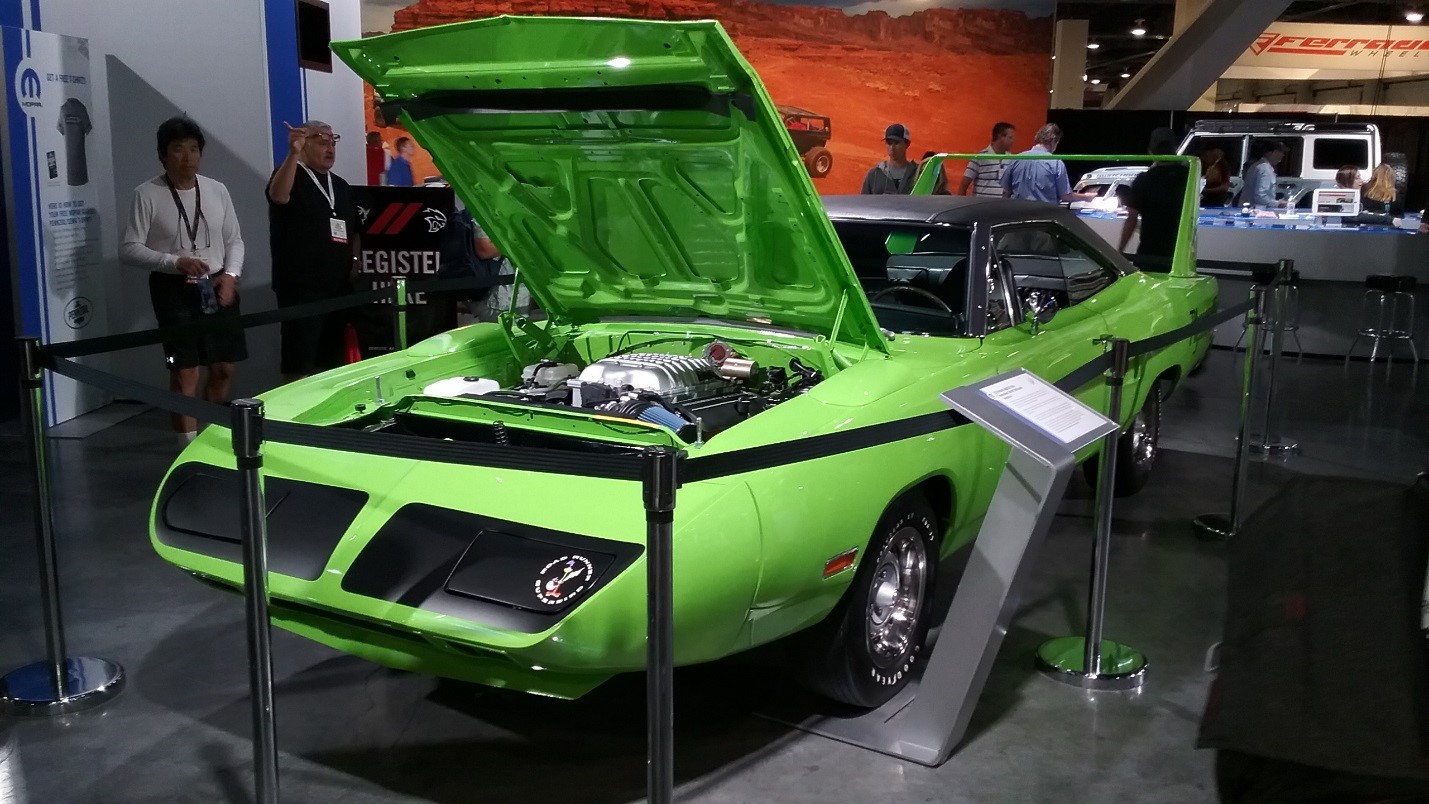 The American Southwest, native habitat of the Roadrunner – like this 1970 Superbird tribute car.

Of course, Ford wasn’t the only OEM in town. Chevrolet, FCA, Toyota, Audi, Honda and Hyundai all had a presence at the show. Chevy brought its new special edition Camaro, honoring the 50th anniversary of Hot Wheels diecast cars, while FCA celebrated all things Mopar. Toyota, marking the 60th anniversary of its U.S. sales arm, brought Camrys representing each of that venerable model’s eight styling generations. 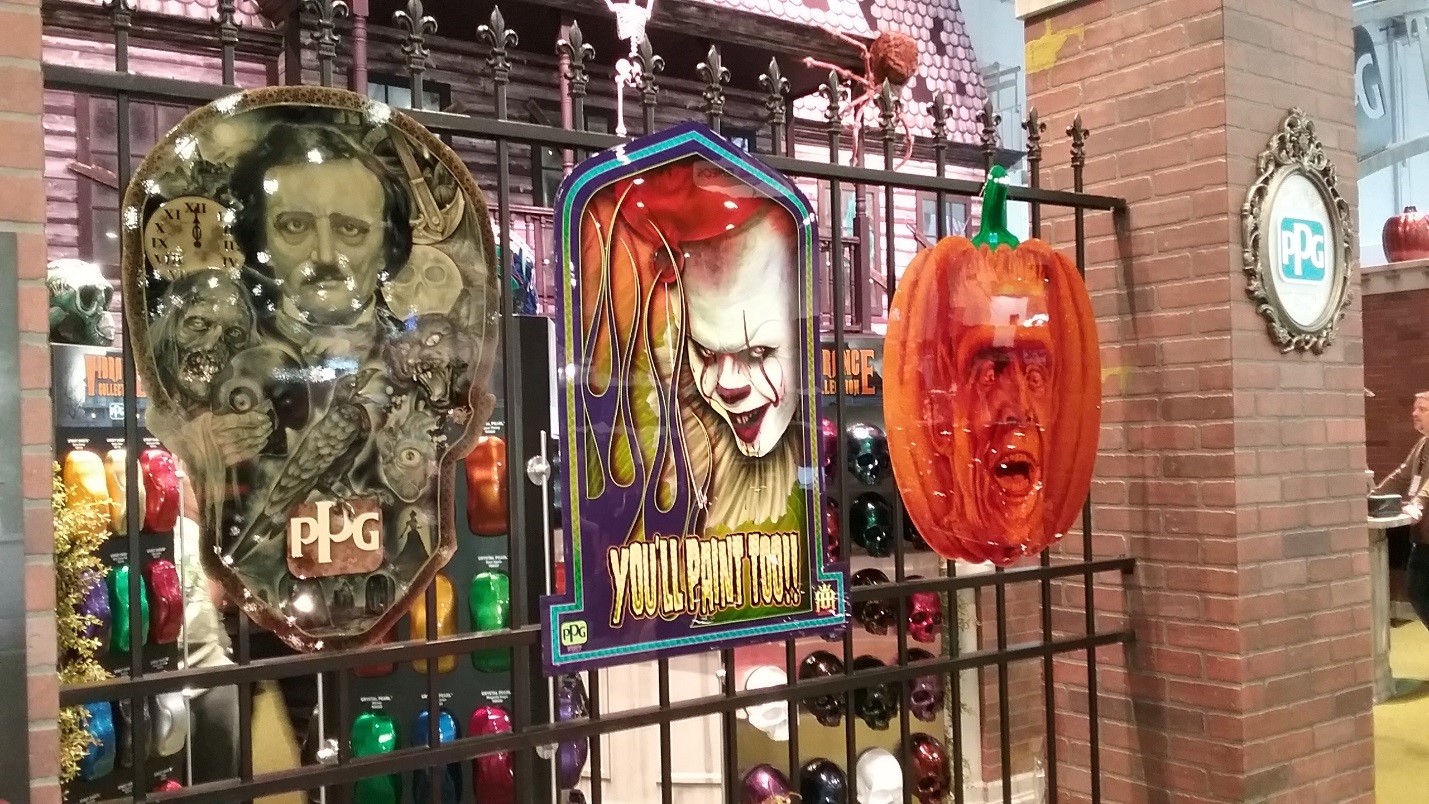 PPG Paints gets my vote for most elaborate show booth. Embracing SEMA’s opening date of October 31, the company built a giant haunted house, complete with cars and parts strewn about the front lawn called – what else – “The Boneyard.” The surrounding fence was decorated with incredible airbrush art celebrating Halloween heroes like Edgar Allen Poe and Herman Munster. 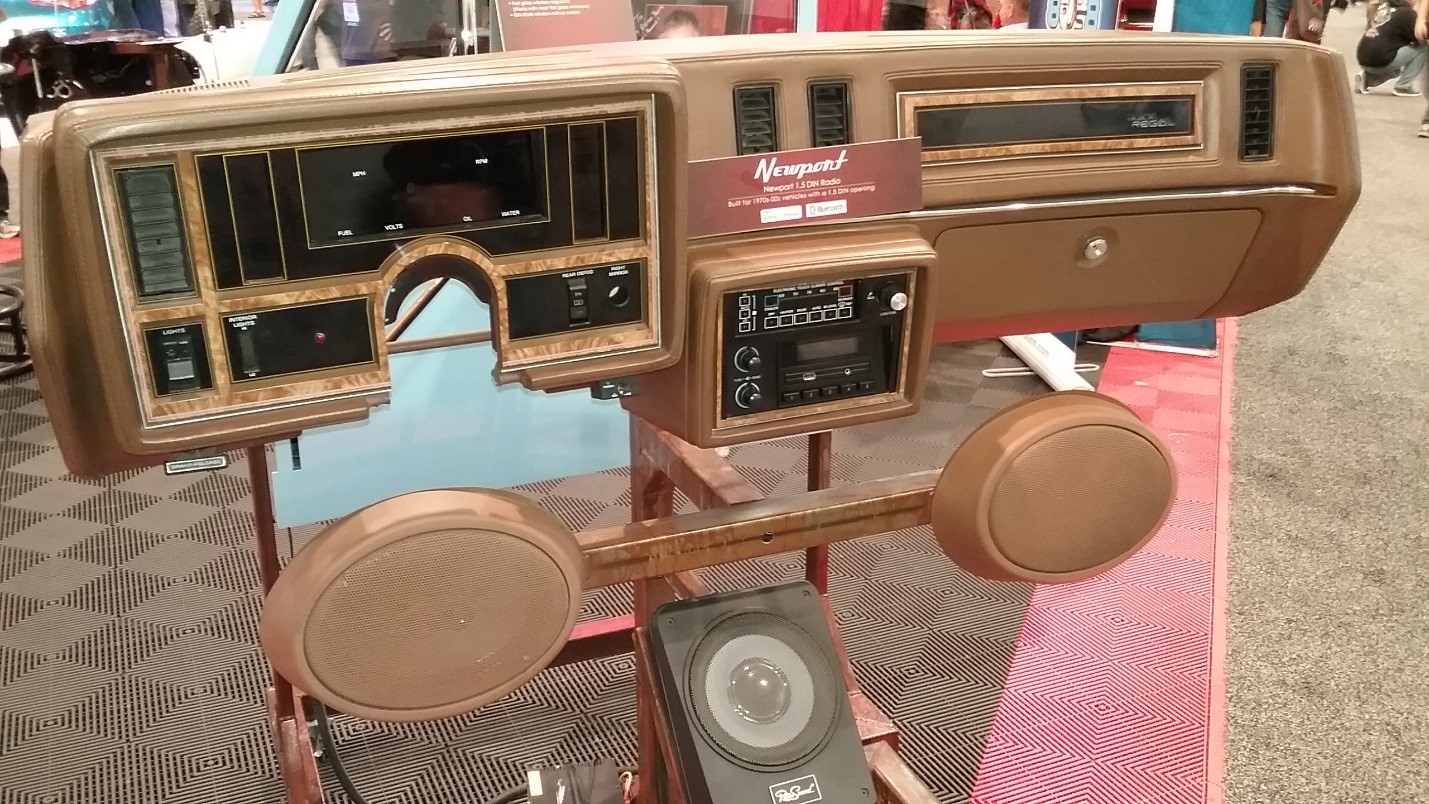 Having a hard time finding new cassettes for your mid-1980s Buick Regal? Retro Manufacturing will sell you a perfect-match stereo with a USB port. 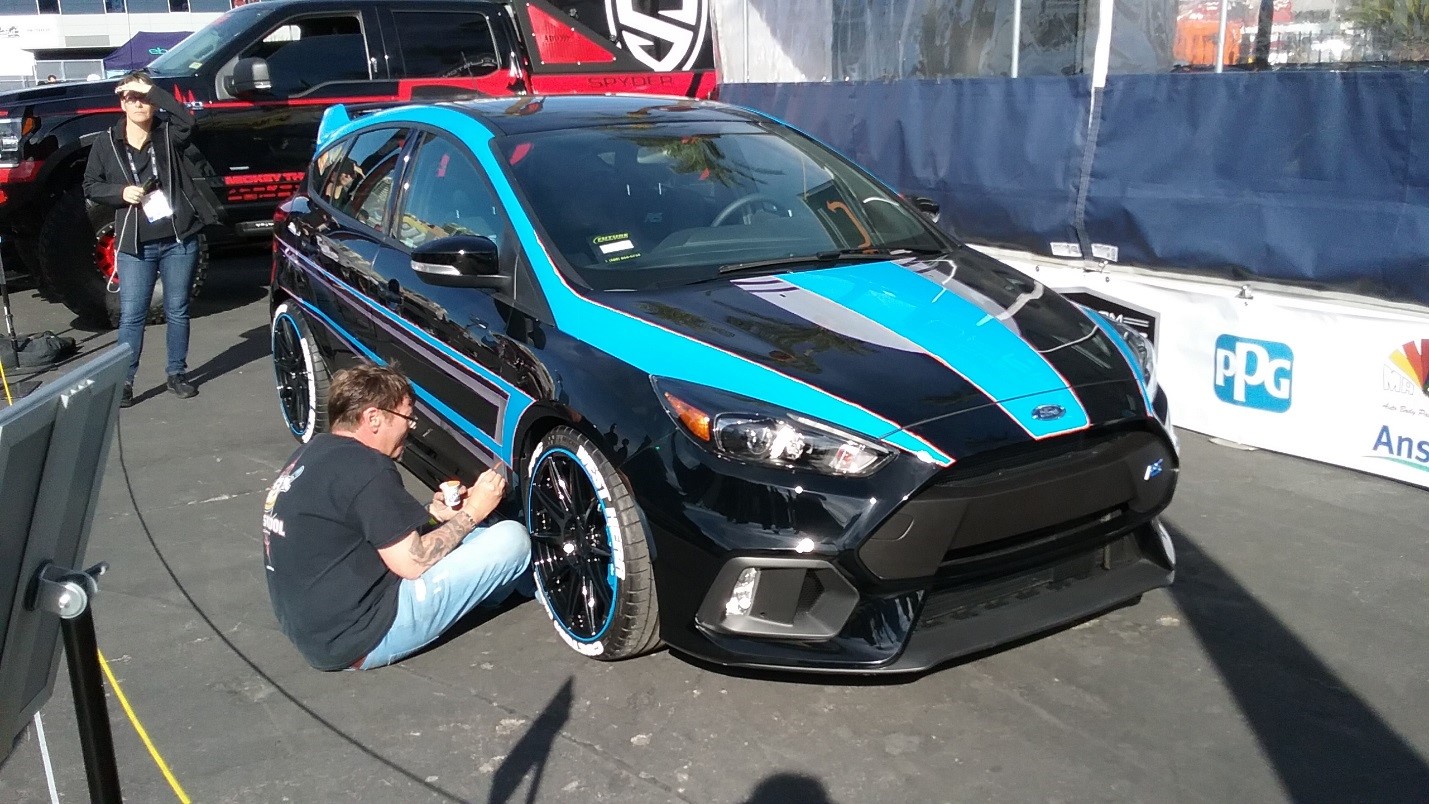 Many SEMA booths hosted live demonstrations, like this pinstriper at work on a Ford Focus RS.

There were educational opportunities, too. Workshops and seminars throughout the week ranged from standard business conference fare (“Building a Sustainable Social Media Strategy”) to the decidedly SEMA-specific (“Building the Best Boosted Engines of Your Career”). If seminars aren’t your thing, you could learn by watching everything from welding to pinstriping taking place right at exhibitor booths. 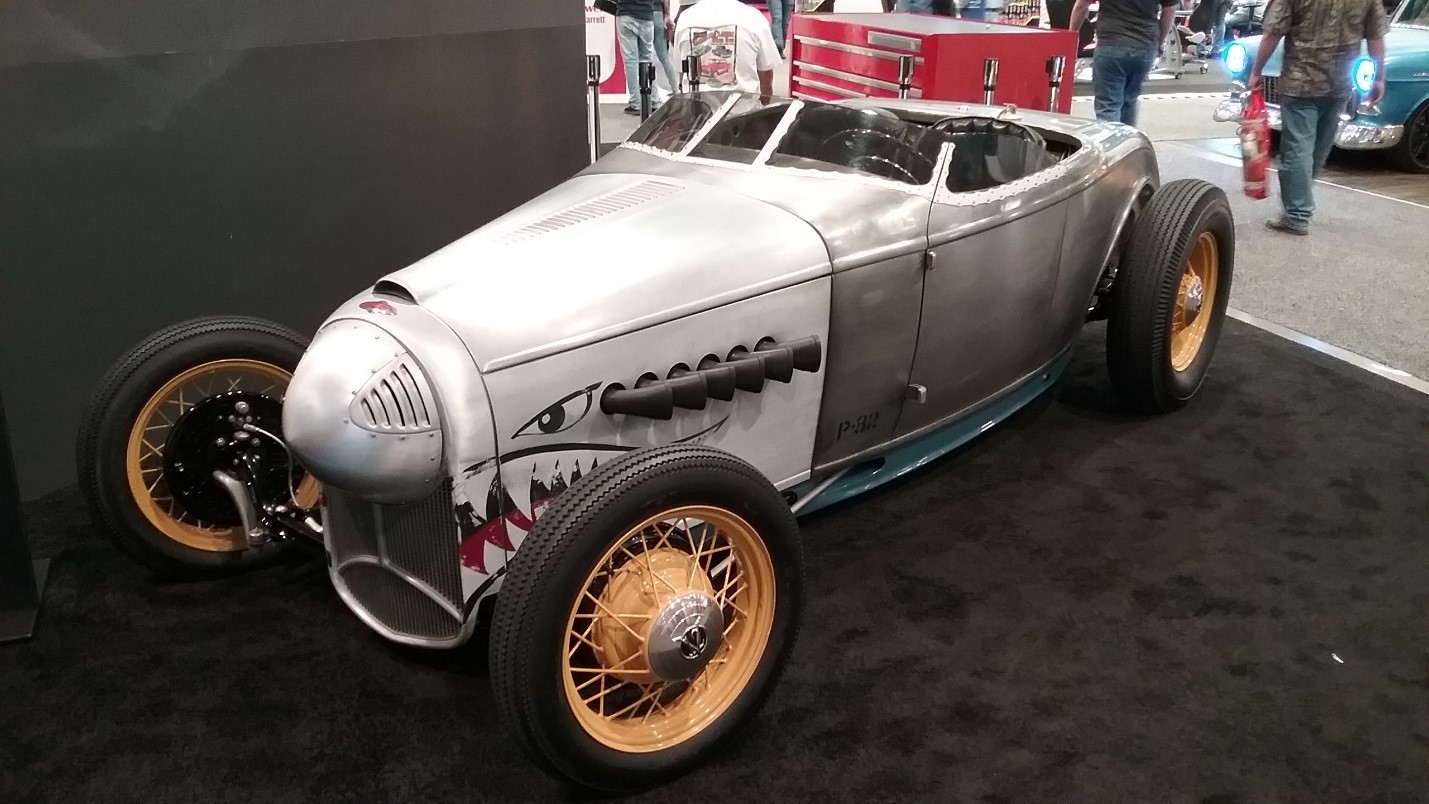 When is a Mustang a Lincoln? When it’s this P-51 Mustang airplane-inspired hot rod by Chip Foose, powered by a Lincoln-Zephyr V-12.

Contests added to the fun, too. Hot Rodders of Tomorrow, a nonprofit that encourages young people to consider careers in the automotive aftermarket industry, sponsored a challenge in which high school teams competed against each other in timed engine rebuilds. The most celebrated contest was SEMA’s annual Battle of the Builders. Nearly 200 customizers brought vehicles to be judged in four categories: hot rods, trucks/off-road vehicles, sport compacts, and young guns (for builders age 27 and under). Three top finishes were selected from each category over the show’s run, and these top 12 vehicles led the post-show SEMA cruise. An overall winner was then selected from the 12. Troy Trepanier took this year’s top prize with his 1929 Ford Model A hot rod. 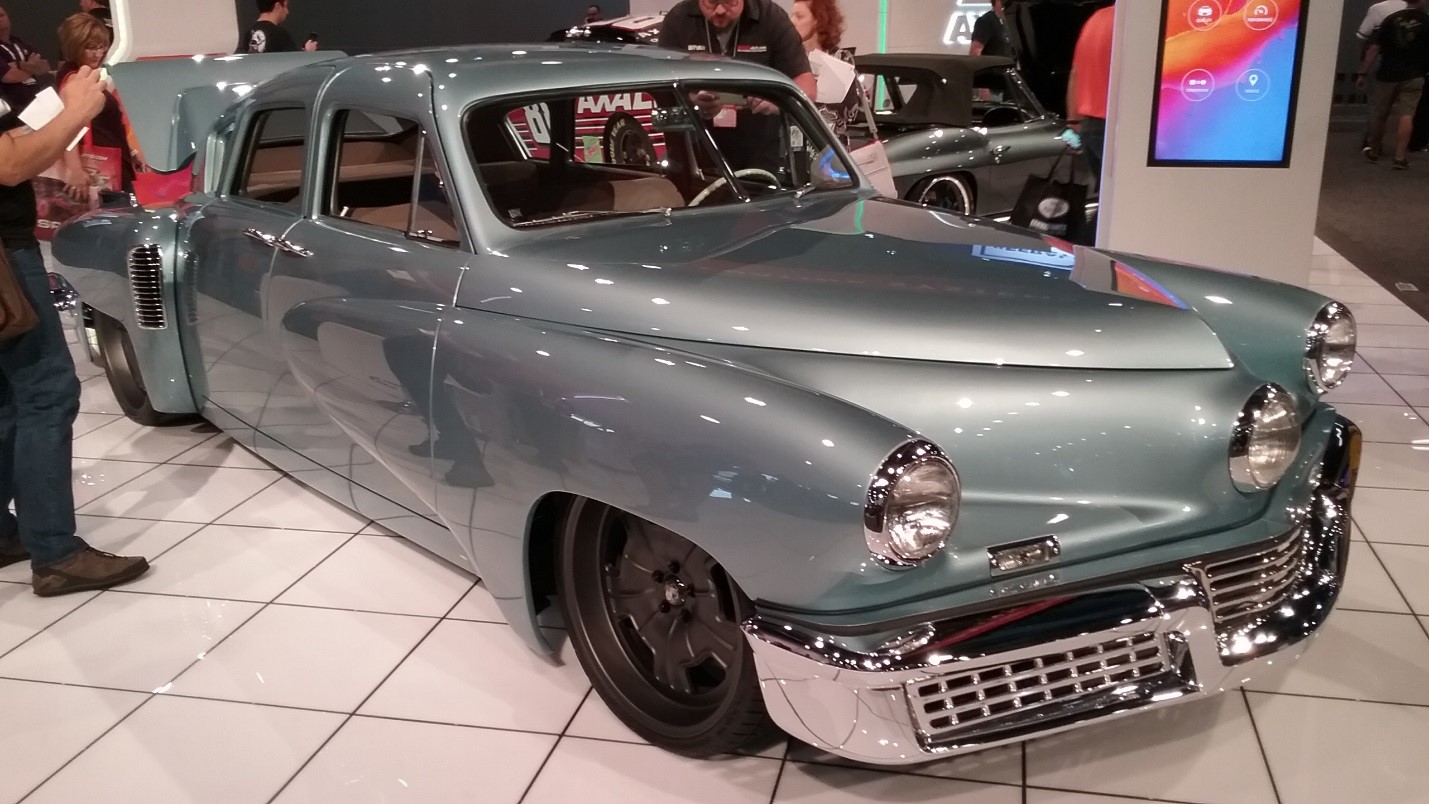 So ended another SEMA Show – and a successful golden anniversary tour for the Mark IV. And while it’s good to have the car back in the museum, we’re glad we could share it with so many people over the past two years. We’ll hope to see some of you again in 2067!