March 18, 2021 Archive Insight
This is the second of a series of blog posts presented in conjunction with the traveling exhibition, Louis Comfort Tiffany: Treasures from the Driehaus Collection. The exhibit, consisting of approximately 60 artifacts, is on view at Henry Ford Museum of American Innovation from March 6, 2021, through April 25, 2021. All of the objects shown here are from the collections of The Henry Ford and provide background on themes in the exhibition.

Louis Comfort Tiffany’s glass is part of a larger group that scholars and collectors call Art Glass. Art Glass is generally defined as ornamental and decorative glass dating from the mid-to-late 19th century through the early 20th century. Makers of Art Glass employed newly developed technologies for producing vibrant colors and surface textures. The work of Tiffany is undoubtedly the most well-known, but the beginnings of Art Glass predate Tiffany’s glass work by nearly a decade.

Nineteenth-century Americans were obsessed with showing off their good taste and wealth to family, friends, and neighbors. Conspicuous consumption and ostentatious materialism were bedrock beliefs in Victorian society. Glass for decoration was an important part of the Victorian interior, whether one was wealthy or of modest means. Art Glass, which was less expensive than cut glass, allowed middle-class Americans an opportunity to decorate with style. 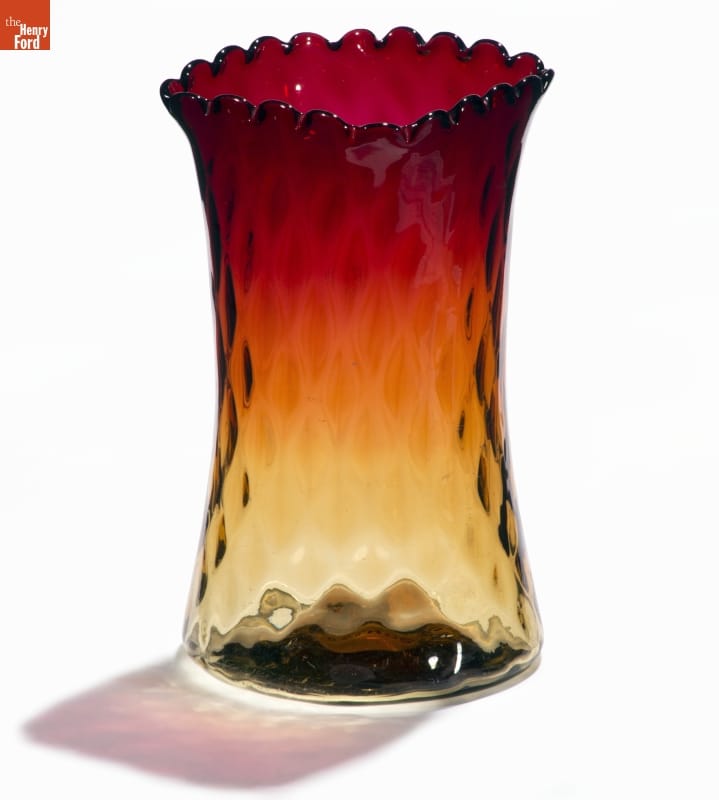 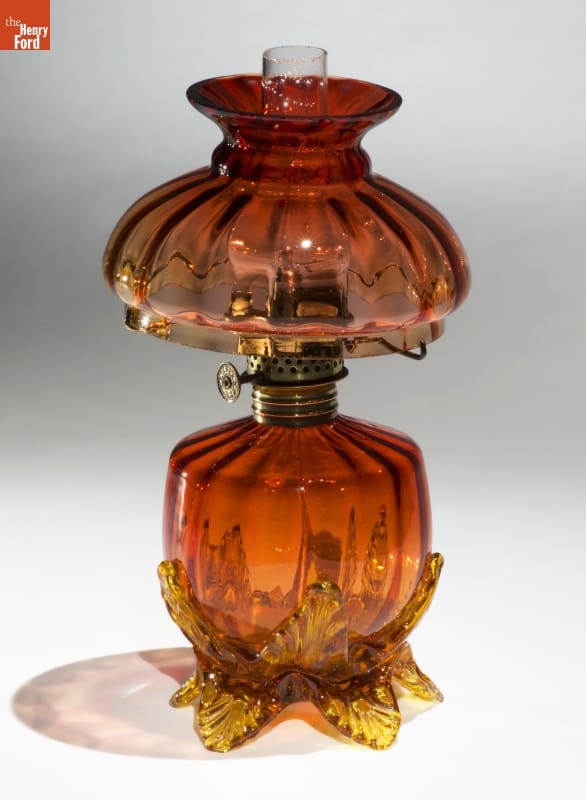 Scholars consider the most successful early Art Glass a product line called “Amberina,” first made by the New England Glass Company (later the Libbey Glass Company) in 1883. It was extremely popular and was widely imitated. Amberina was a relatively simple technique, known to glass makers but only exploited in the 1880s. The glass, which ranges from amber at the bottom to red at the top, is colored with a heat-sensitive gold additive. This shading results from reheating the top part of the glass before allowing it to cool.

Art Glass Goes Big: The Morgan Vase and Its Impact 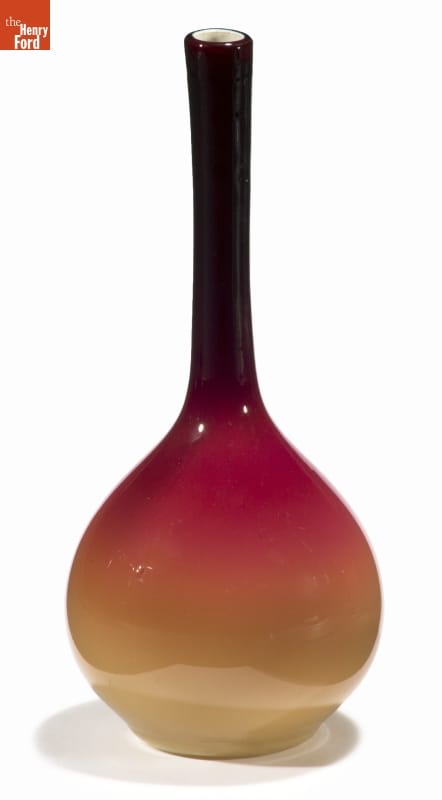 In 1886, an 18th-century Chinese porcelain was part of a highly publicized New York auction of the collection of socialite Mary Morgan. The vase, reputed to be the finest of its kind, sold for a record of $18,000. This unprecedented price made headlines, and soon enterprising glass and ceramic makers began to produce replicas of the vase. First known as “Morgan” vases after Mary Morgan, and later as “Peachblow,” these wares made Art Glass overwhelmingly popular with the public and highly profitable for many firms. Peachblow glass, like Amberina, ranges in colors from dark red to yellow. The most famous maker of Peachblow was J.H. Hobbs, Brockunier, and Company of Wheeling, West Virginia, whose colorations closely imitated the famous “Morgan” Vase. 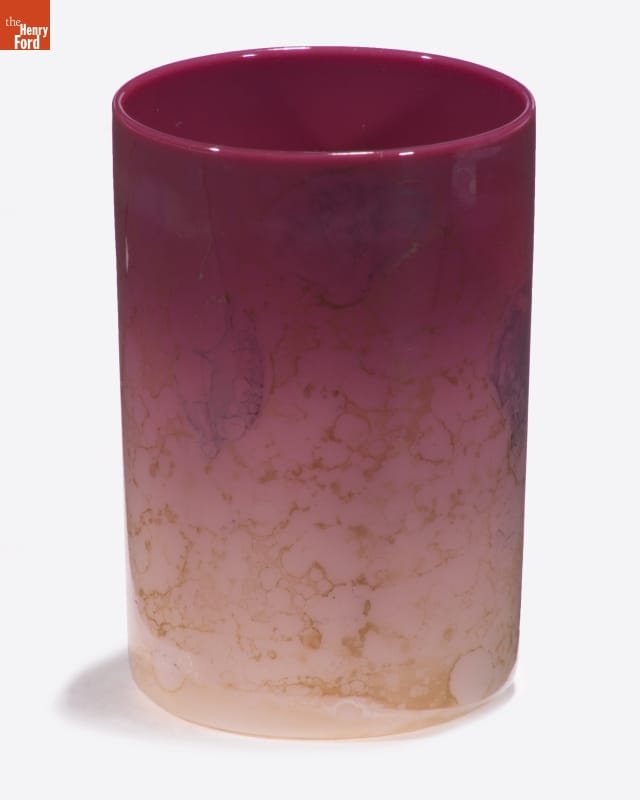 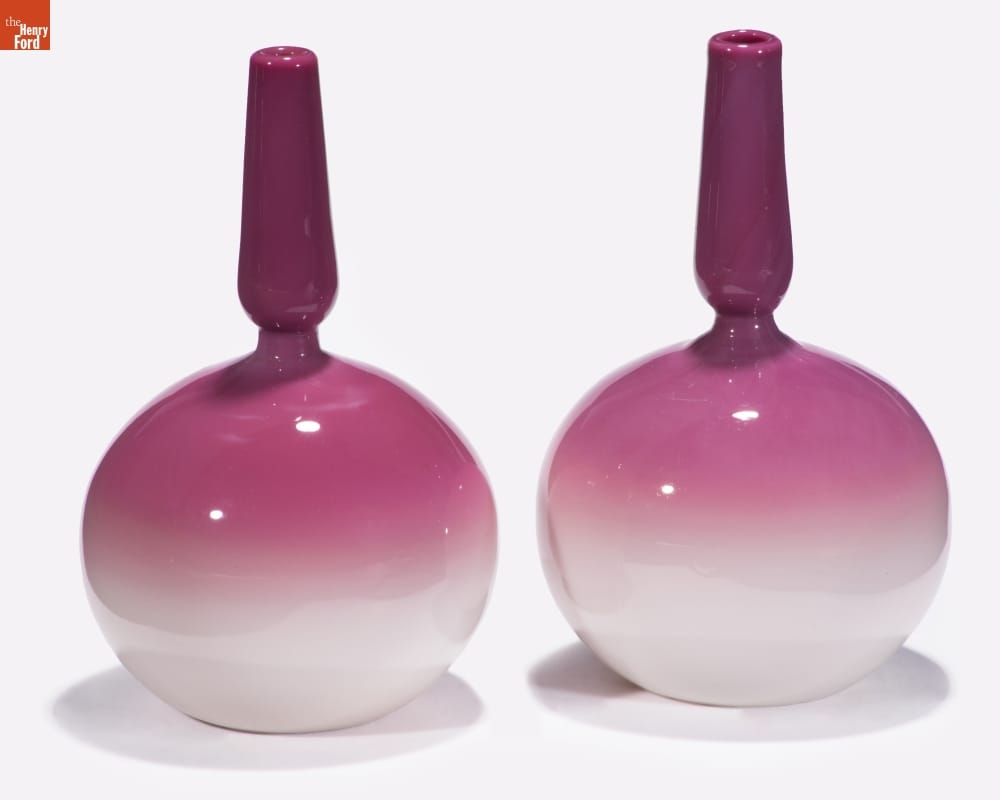 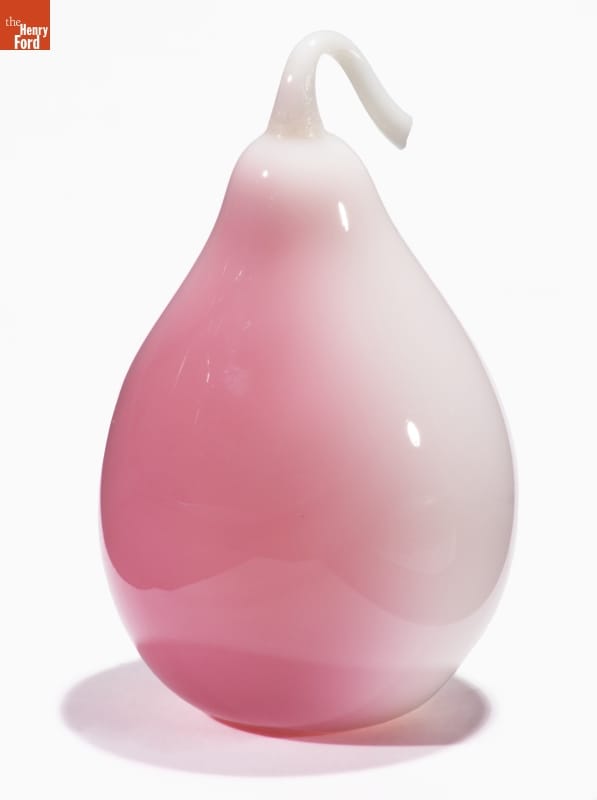 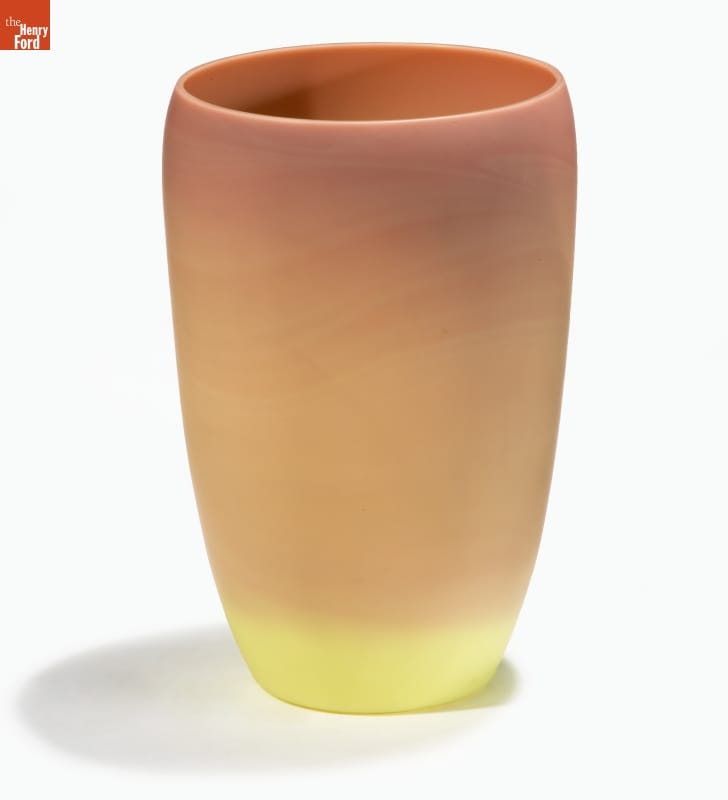 The most versatile of Art Glass producers was the Mount Washington Glass Company, located in New Bedford, Massachusetts. Although they created some of the very first Art Glass in the 1870s, they made their name with a line called “Burmese,” first patented in 1885. Like Amberina, Burmese ranges in shades from yellow at the bottom to a pale pink at the top of the piece. Unlike Amberina, it is always opaque. It was produced in both smooth and satin finishes, decorated and undecorated. 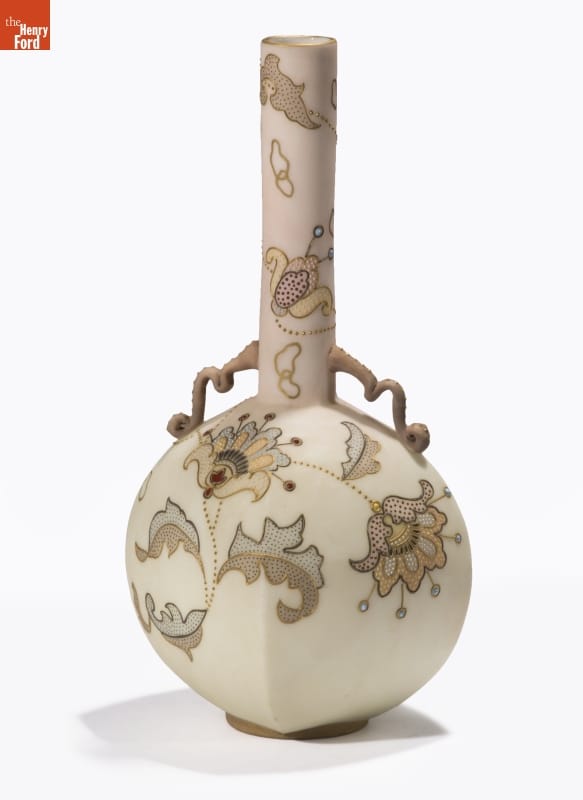 With the success of the Burmese line, Mount Washington Glass Company produced even more ornate lines. They followed up Burmese with their “Crown Milano” line, which featured exotic-looking forms with ornate surface decorations. These would fit perfectly into the décor of an eclectic, late 19th-century American parlor or sitting room. 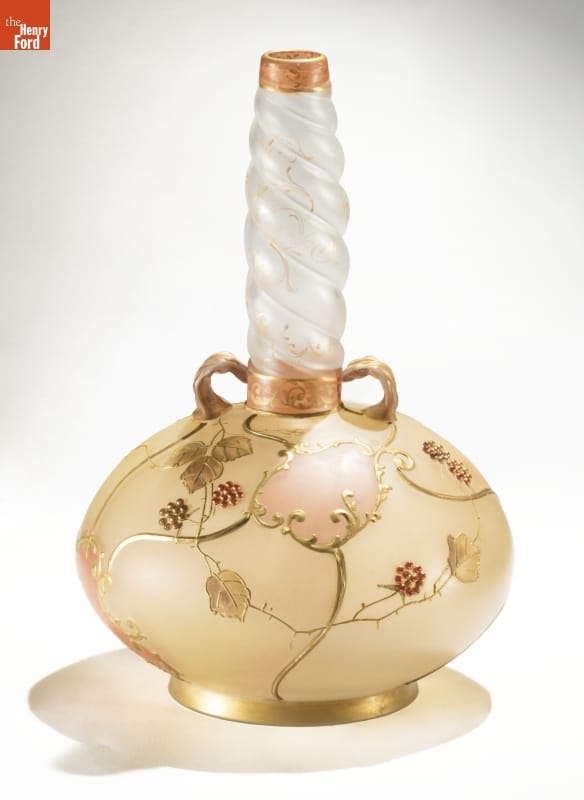 For me, the ultimate in Mount Washington’s ornate Art Glass was their “Royal Flemish” line, dating to the 1890s. The satin glass body is covered with floral gilt decoration and the neck features swirled decoration, culminating in a gold ring at the top. It was in this environment that Louis Comfort Tiffany started creating Art Glass. In the early 1890s, Tiffany developed a process to imitate the iridescent shimmer of ancient, weathered glass. He patented the process in 1894, which he called “Favrile.” Unlike other Art Glass makers, Tiffany was renowned for creating elegant, yet simple, products as well as grand, large-scale objects like stained glass windows and even interior environments. Tiffany often mixed media, such as the bronze and glass candelabrum above. The sinuous and organic forms are closely related to the international Art Nouveau style, which reached its height of popularity around 1900.

Around 1900, Tiffany started making large scale floor lamps—the one above is one of his first efforts. The fish scale–like shade is composed of his signature Favrile glass, which glows when illuminated. The bronze base features undulating spirals which rise through the lamp’s shaft. The kerosene reservoir is covered with organic S- or wave-like patterns, all of which derive from Tiffany’s Art Nouveau vocabulary. This nature-themed "Daffodil" lamp is the first design attributed to Clara Driscoll, who led the Women’s Glass Cutting Department at Tiffany Studios. Driscoll designed many now-iconic leaded-glass lamps for Tiffany. Driscoll took iridescent Art Glass a step further, echoing nature—in this case daffodils, which she studied in detail while designing this lamp. 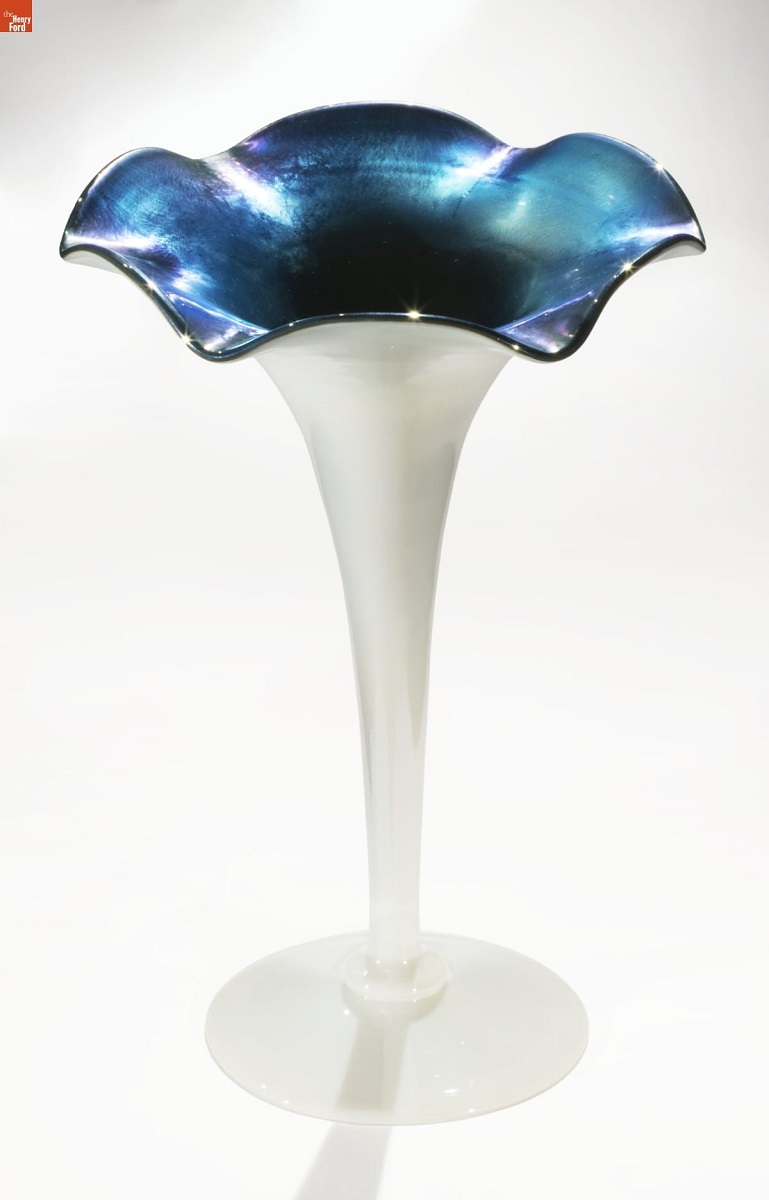 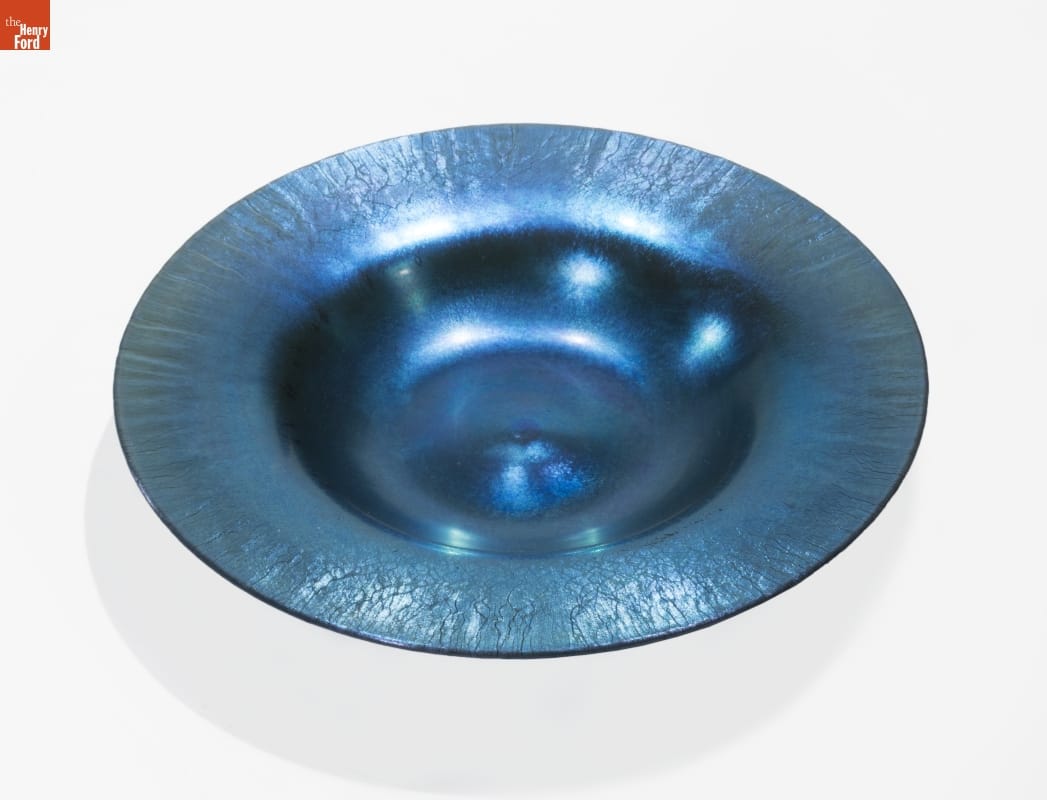 By the turn of the 20th century, Tiffany’s iridescent Art Glass faced competitors. Foremost among them was the Steuben Company of Corning, New York. “Aurene” was the name that Frederick Carder used for his iridescent Art Glass. When Aurene was first produced, around 1902, Louis Comfort Tiffany sued Carder for copyright infringement. The courts found in favor of Frederick Carder, and Steuben’s Aurene competed with Tiffany’s Favrile glassware. The elegant, floral-shaped vase above combines a cased white outer shell with a dark blue iridescent interior, and may be easily confused with Tiffany’s work. 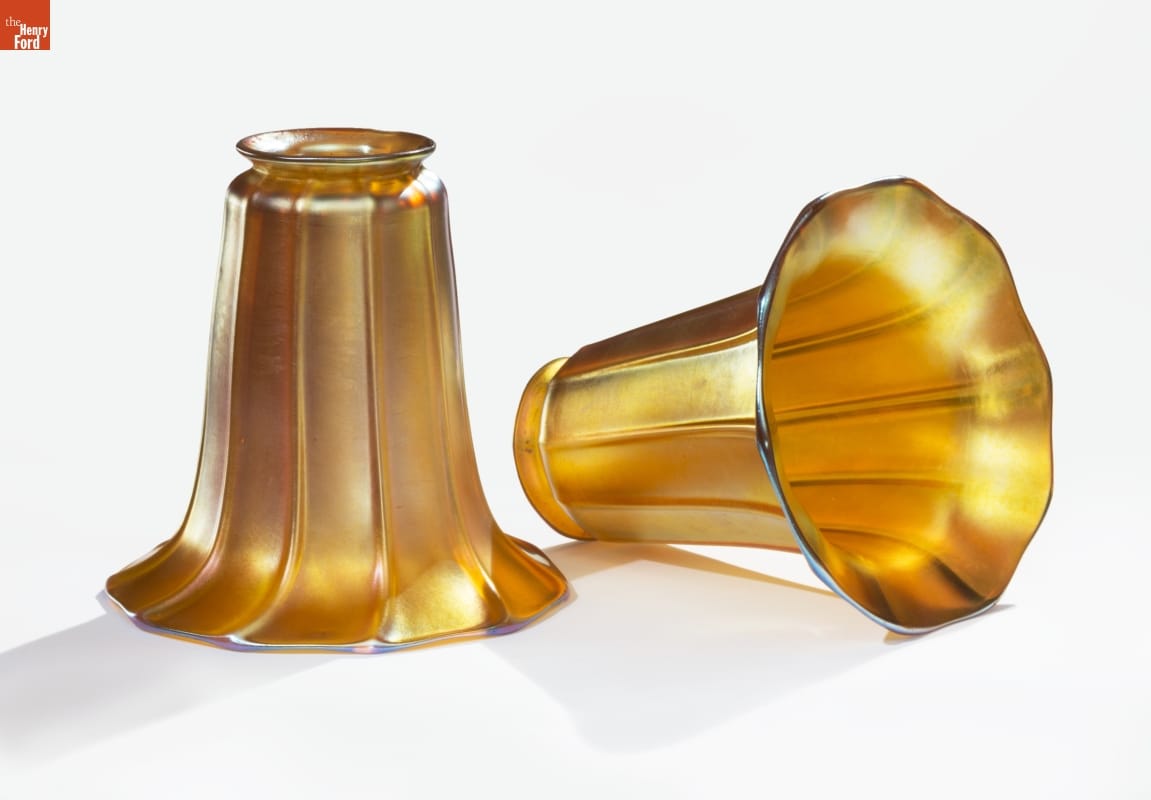 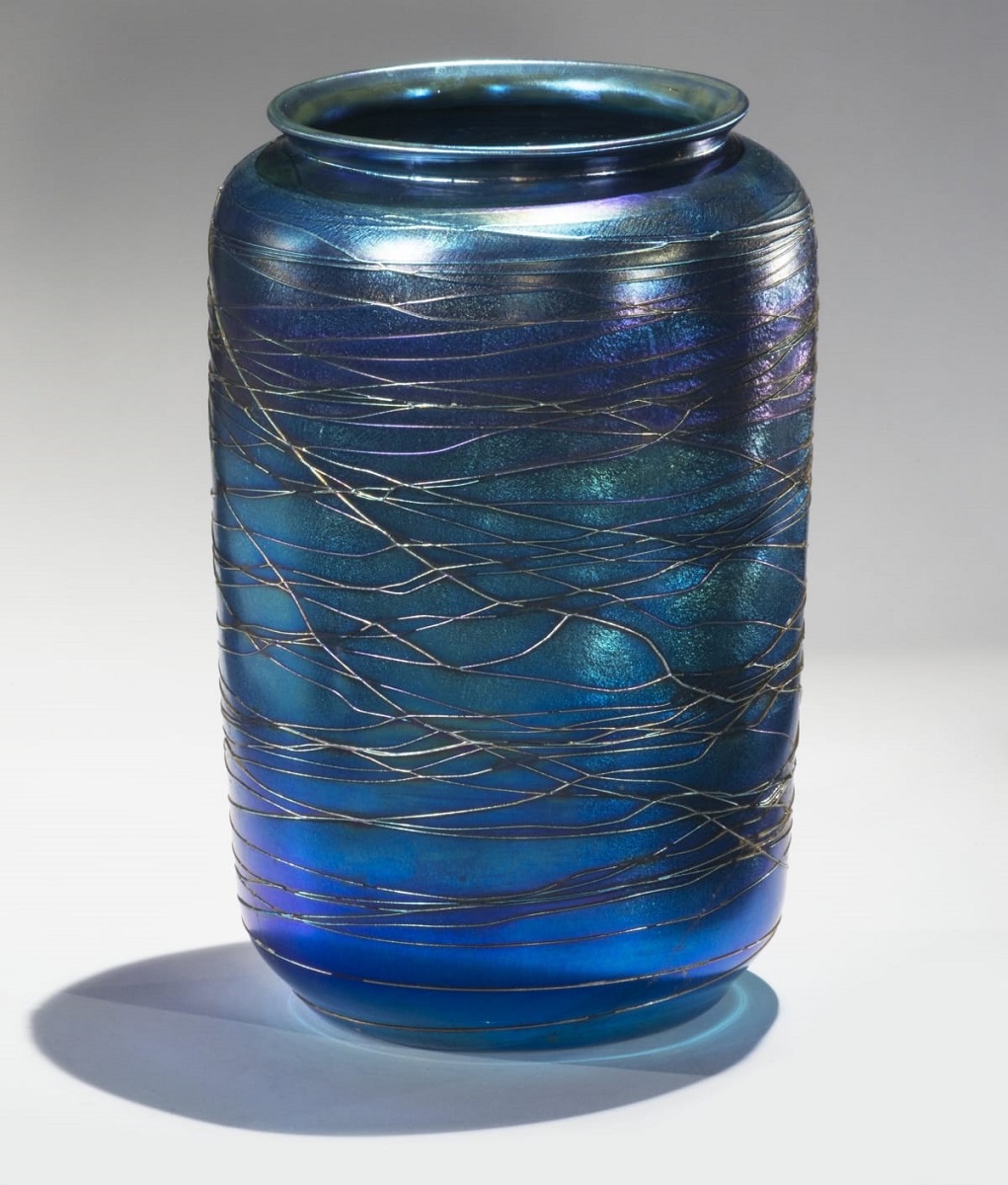 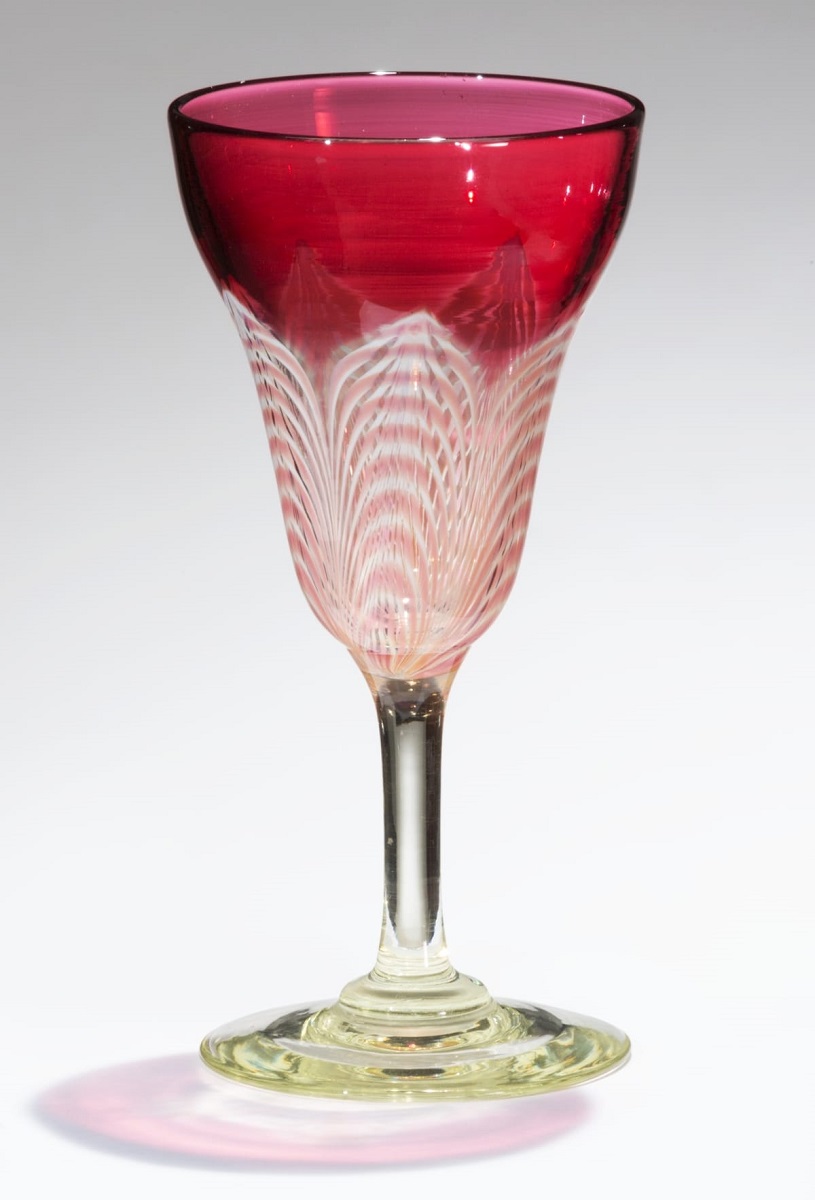 One of the most interesting of Tiffany’s competitors was Durand Art Glass of Vineland, New Jersey. Founded at the end of the 19th century, the company developed a distinctive style of Art Glass. By the mid-1920s, they hired workers from the Quezal Art Glass Company, which had recently disbanded. They also hired a glass artist named Emil Larson, who had worked for several Art Glass firms and brought his distinctive feather design to Durand Art Glass.

The End of Art Glass 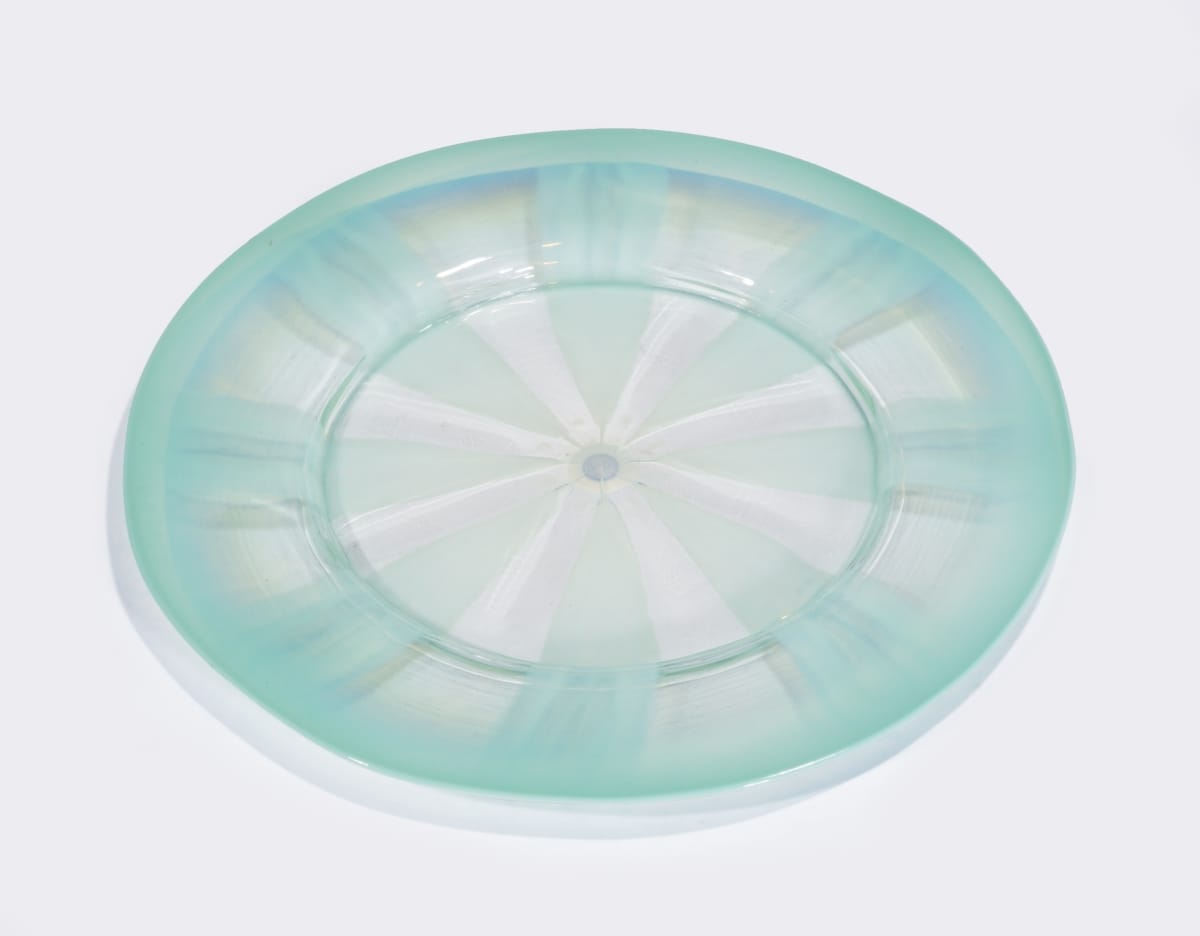 In 1919, Louis Comfort Tiffany retired and turned his Tiffany Studios over to Arthur Nash, who continued the firm until it closed in 1933. These pieces were designed by Nash and marketed as Favrile glass. Nash maintained the high quality of Tiffany’s output, but times and tastes had changed following World War I. Art Glass was viewed as old-fashioned and part of the Victorian past. 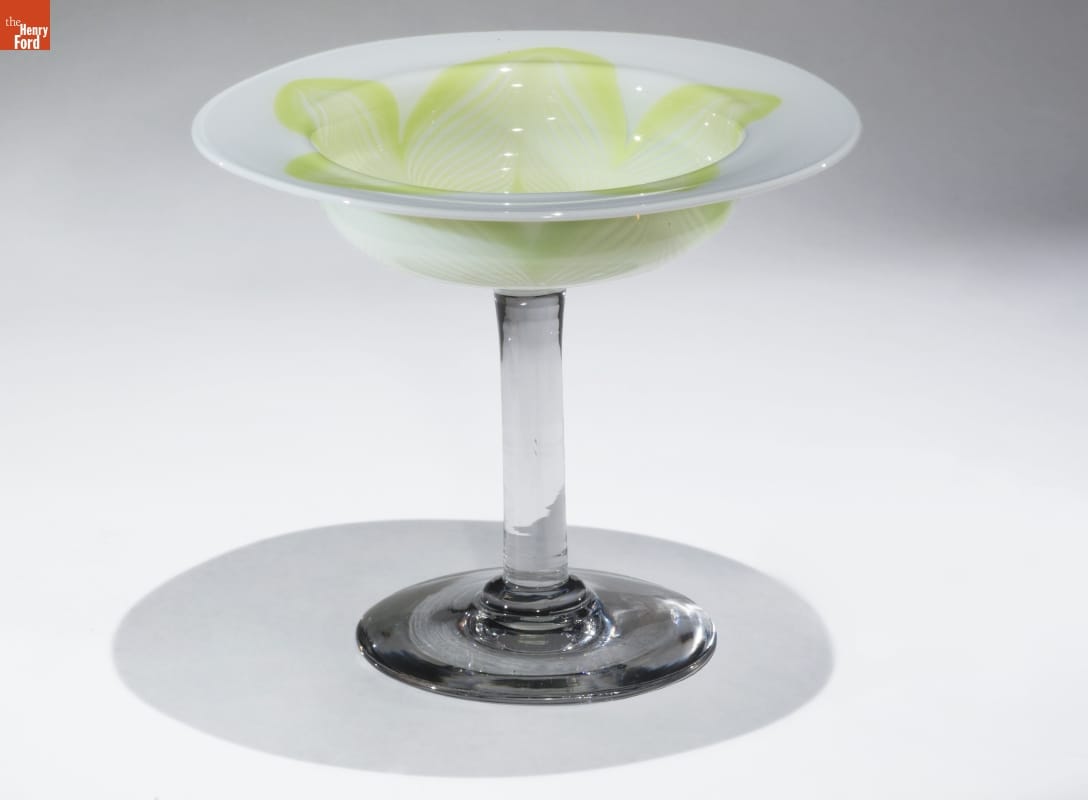 Following the demise of Tiffany Studios, Arthur Nash was hired by the Libbey Glass Company to design their “New Era” glass line. This ill-fated line was beautiful, but was considered old-fashioned during the early 1930s. This was also the beginning of the Great Depression, so sales were minimal and the line was discontinued by 1935.