Throughout its history, the Burroughs Corporation adhered to the founding principles of William S. Burroughs – to respond to the human problems of the times with relevant technologies. As part of the William Davidson Foundation Initiative for Entrepreneurship, we had the opportunity to delve into the Burroughs Corporation Collection, which consists of machinery, photographs, publications, and marketing materials for the business equipment that Burroughs manufactured. William Seward Burroughs – grandfather to the Beat Generation author sharing the same name – was a banker from Auburn, New York. He was also an inventor with an aptitude for mechanical design. Burroughs suffered from tuberculosis and moved his family to St. Louis, Missouri, in 1882 on the suggestion of his doctor, who thought the warmer climate would be better for his health. While there, Burroughs rented bench space from a local machine-shop owner, Joseph Boyer, and began designs on a machine that could ease the work of figuring and re-figuring mathematical calculation by hand – work that proved tedious for bankers and shopkeepers alike. In 1886, with a working machine complete, Burroughs formed the American Arithmometer Company with co-founders Thomas Metcalfe, RM Scruggs, and William R. Pye, to produce and market his machine. 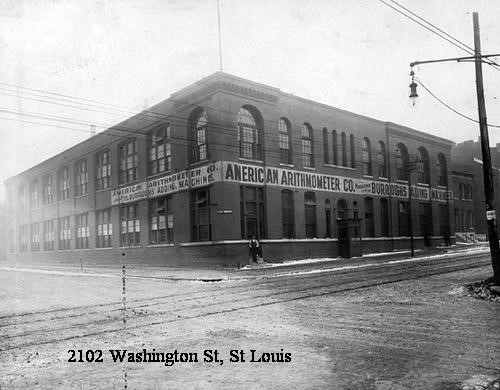 The company’s first device was a simple addition and subtraction machine. Unfortunately, the machines didn’t work as well as planned. It was quickly discovered that accurate calculations required a specific amount of pressure to be applied to the handle. This was an unforeseen mechanical flaw that produced inaccurate calculations and caused bankers to lose faith in the machine, nearly causing the fledgling company’s failure. Burroughs was incredibly disappointed. In fact, he was in the process of quite literally throwing the machines out the window of his second-story workroom when he had the idea to use a dash-pot. A dash-pot is a mechanical device which resists motion – for instance, preventing heavy doors from slamming. This provided a uniform motion for the handle regardless of the force exerted upon it, regulating the mechanism. With the handle problem solved, bankers renewed their trust in the machines and bought them with enthusiasm. In the first decade, the company grew in staff and sales, increasing their product line to four models by 1898. Unfortunately, William S. Burroughs died the same year, but his company was left in good hands. Under President Joseph Boyer, the company experienced significant growth. By 1904, the company had outgrown its St. Louis facility, moving operations to Detroit, Michigan, where a 70,000-square foot factory was built. In 1905, the company was renamed the Burroughs Adding Machine Company as a tribute to its late founder. In the 1920s, the company continued to expand its operations, establishing worldwide sales in 60 countries and production in South America, Europe, Africa, and Australia. In the mid-1930s, recognizing the potential for additional advanced equipment, the company’s product line diversified to include over 450 models of manual and electric calculation devices, bookkeeping machines, and typewriters. 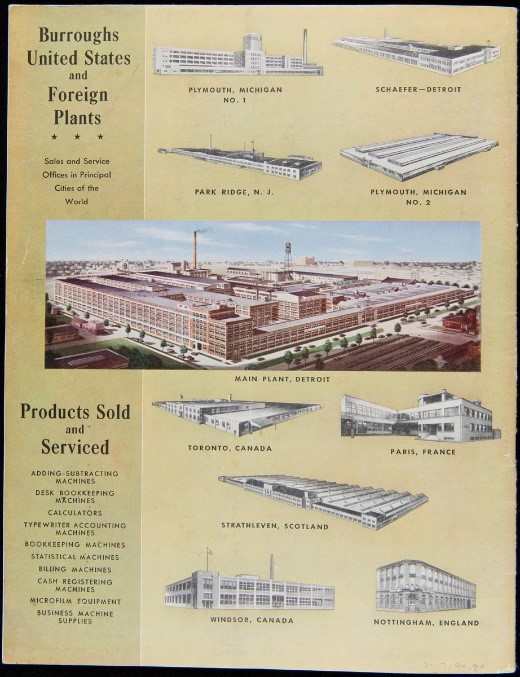 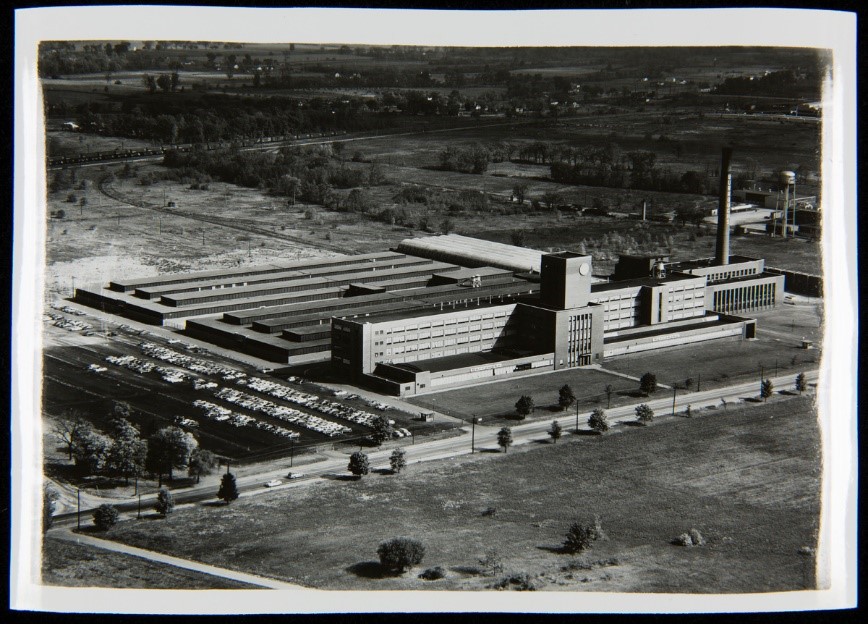 During World War II, Burroughs’ production was halted as the company collaborated with the National Defense Program to enter into military and war contracts. Its most influential contribution to the war effort was the development of the Norden bombsight in 1942. According to the Burroughs’ “History” booklet, this apparatus made “accurate, high-altitude bombing possible, and was considered by some military authorities as the single most significant device in shortening the war.” This same bombsight was used on the Enola Gay to accurately drop the atomic bomb “Little Boy” on Hiroshima, Japan, in 1945.

Burroughs’ work throughout the war launched the company onto a different trajectory once military production was no longer required. Wartime needs had accelerated computer and electronics research, becoming a significant part of the company’s focus in the 1950s, along with defense, space research, banking, and business technology. In 1952, Burroughs built the core memory system for the ENIAC – the world’s first electronic general-purpose computer.

The 1950s were a time for diversification for Burroughs as the company acquired many other entities in order to expand its product capabilities. In 1953, to reflect its increasingly diverse product and service offerings, the company was renamed the Burroughs Corporation, and was recognized as a single outlet for a variety of business management products. One of the most significant acquisitions came in 1956, when Burroughs acquired ElectroData Corporation of Pasadena, California. This allowed Burroughs to further expand into the electronic computing market and led to the development of the B5000 series in 1961, which was celebrated as a groundbreaking scientific and business computer. 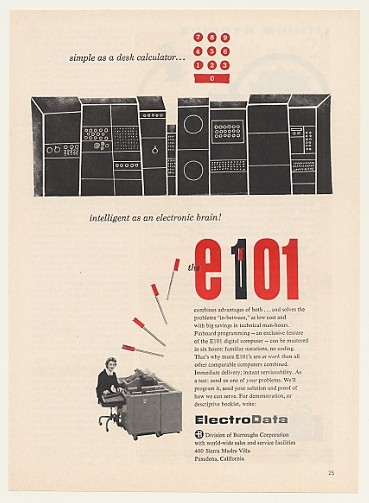 dvertisement, “Breakthroughput,” for the Burroughs B5500 Information Processing System, 1964 THF299360

Successful collaboration during wartime prompted Burroughs Corporation to be awarded additional government and defense contracts throughout the 1960s. The company provided electronic computing solutions in the Navy’s POLARIS program, the Air Force’s SAGE, ALRI, ATLAS, and BUIC air defense networks, and the NORAD combat computing and data display system. According to the Burroughs’ “History” booklet, during the Cold War Burroughs computers were being “used to make split-second evaluations of threats to the North American continent using input from satellites and radar throughout the world.” Burroughs also produced a transistorized guidance computer in 1957, which was used in the launch of Atlas intercontinental ballistic missiles (ICBMs) – this same system was deployed in the 1960s to launch Mercury and Gemini space flights. By the 1970s, Burroughs had emerged as a major player in the computer industry, but was still in the shadow of powerhouses like IBM. To further its influence and market potential, the company began thinking about office automation and information management in a holistic way, providing all scales of computers from mini- and micro-computers to networks and large modular systems – along with the software and peripherals (printers, communications systems, displays, and keyboards) to complement them.

Throughout the early 1980s, additional acquisitions were achieved in order to fill technology voids and strengthen areas targeted for future growth. The company also developed joint ventures to strengthen business relationships. Despite this growth, IBM continued to dominate the market as the unrivaled leader of the computer industry. Hoping to challenge IBM, Burroughs embarked on a substantial entrepreneurial undertaking with Sperry Corporation in 1986. Combining the market positions, talent, and resources of both corporations, the merger was meant to signal a new era of competition. What resulted was one of the largest mergers ever to occur in the computer industry, and the creation of the new entity in information technology, Unisys. 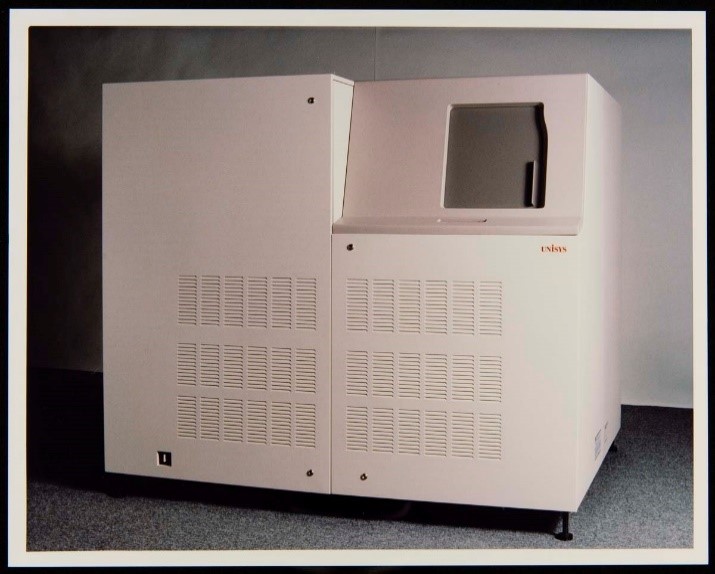 From the adding machine to office equipment to computers that helped to send people into space, the Burroughs Corporation was steadfast in its pursuit of the latest research and in its development of cutting-edge technology. To view additional items we’ve already digitized from our Burroughs Corporation Collection, check out our Digital Collections page!

Samantha Johnson is Project Curator for the William Davidson Foundation Initiative for Entrepreneurship at The Henry Ford. Special thanks to Kristen Gallerneaux, Curator of Communications & Information Technology, for sharing her knowledge and resources to assist in the writing of this post.