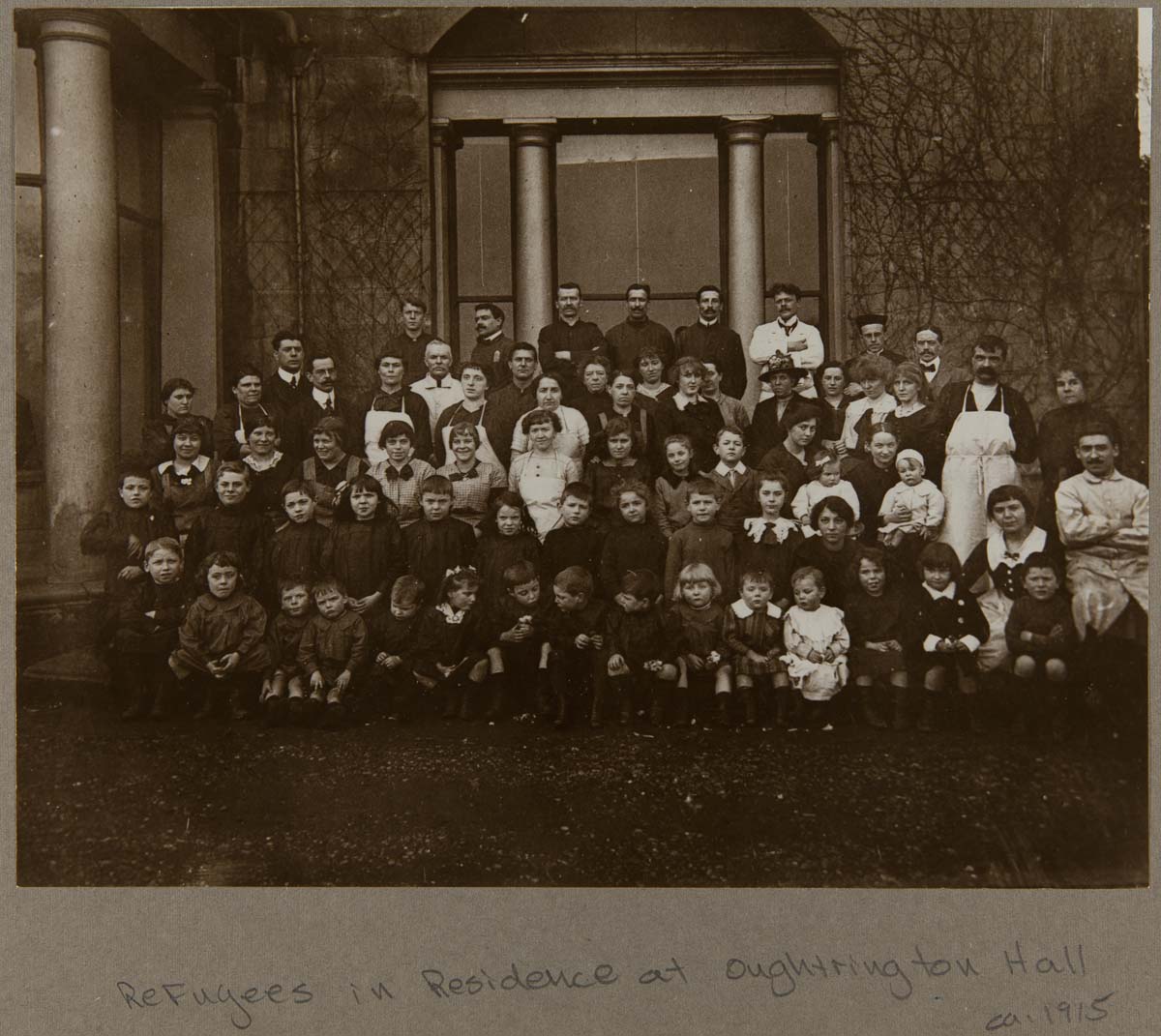 In the early years of World War I hundreds of thousands of Belgian refugees fled to England to escape their war torn country. Lord Perry, of Ford of England, worked with Henry Ford to establish a home for these refugees to help get them on their feet while they found work and homes of their own in England. For this purpose, Perry leased Oughtrington Hall in Cheshire, England with money donated from Henry and Clara Ford to house up to 100 refugees at a time.

The idea of helping the refugees appears to have been discussed in person between Perry and the Fords in October 1914 while Perry was visiting the states. On returning to England, Perry wrote Clara Ford in December of 1914, saying he’d secured Oughtrington Hall for $35.00 per month, with the landlord giving the rent money to the Belgian Refugee Fund. By December 29, 1914 the first group of refugees had arrived consisting of “six better class adults, 14 better class children and 3 nurses for the children; one wounded Belgian Officer and his wife; 7 discharged Belgian soldiers (these men have been wounded and are sufficiently recovered from their wounds to be discharged from Hospital, but not well enough to rejoin the Army; they cannot go back to their homes in Belgium because they have been destroyed); 4 working class married couples with 5 young children, 3 elderly single men.” The first group of refugees was picked by Perry and included those he considered “the better class” and those of the “working class.” Perry envisioned the wealthy refugees overseeing the children and the working class, and the working class performing the housekeeping, and cooking. The “servant class,” however, rebelled at this notion and Perry was soon writing to Clara noting the working class, “imagine themselves guests and see no reason why they should not be treated as guests with a consequence that they expect to be waited on etc.” Perry compromised by proposing they be paid a servants wage for their labor which would be payable after they left the house to return to Belgium or other employment. The number of refugees in the house continued to grow quickly, by February 1915 there were 93 refugees in the house and in March, 110. 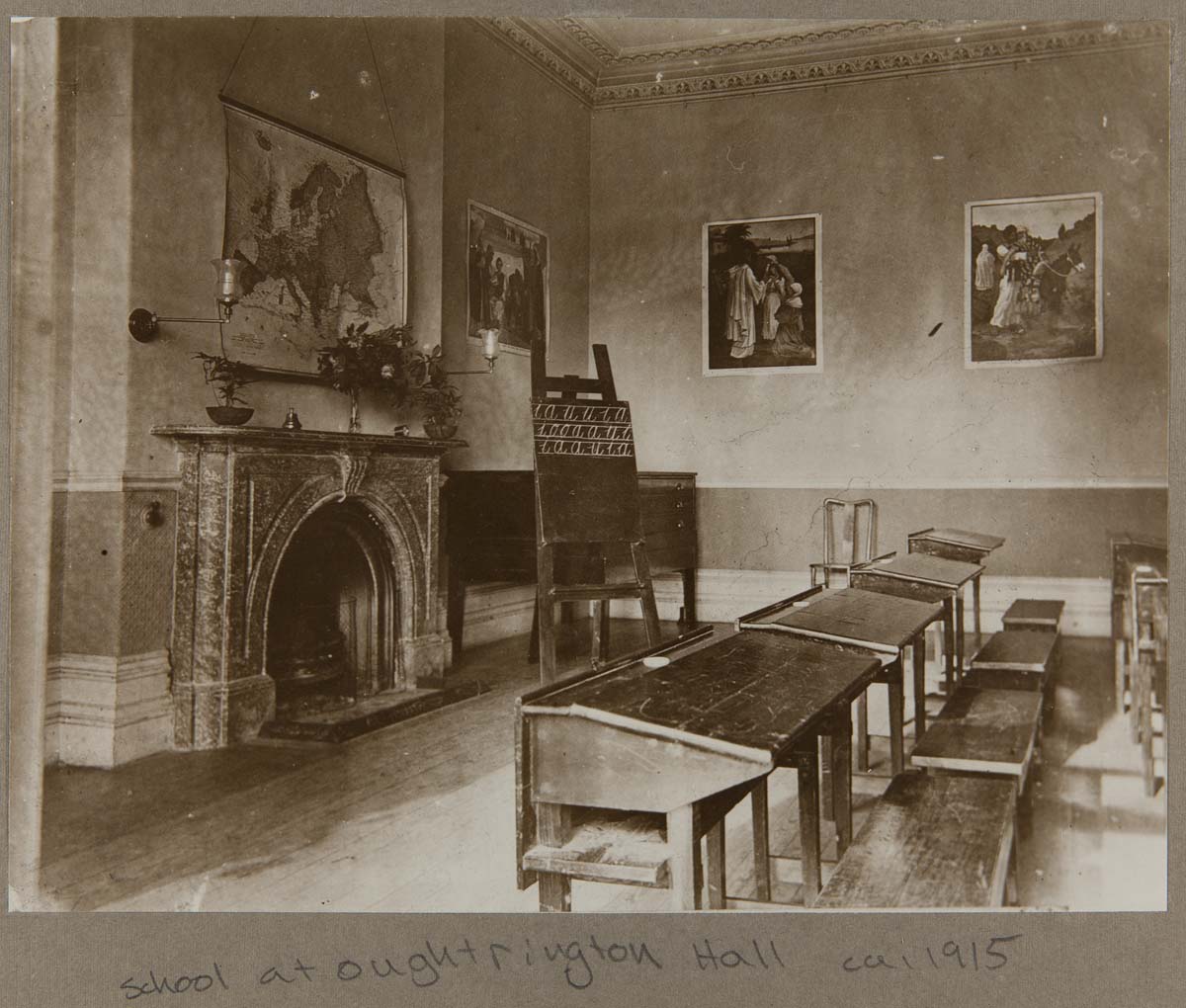 To oversee the group’s needs, Perry appointed a former Ford Motor Company agent in Brussels, Vandermissen as he was the only one in the original group who could speak English. The initial group of refugees battled outbreaks of many contagious diseases, including a scarlet fever and small pox scare. Perry was unable to find a Belgian doctor for some time, so he had to hire local doctors and even use the Manchester plant doctor to see to the refugees needs, however the language gap proved a problem. Eventually, a Belgian doctor was hired, and a surgery and doctor’s office were set up on the grounds. A chapel was built, and a Belgian priest was brought in to see to the refugees’ spiritual needs. Oughtrington Hall was one of the few refugee homes that could house large families and there were always many children in the hall. A nursery and school were established, and the indoor tennis court was heated with a stove to provide a play area for the children. The refugees also raised and sold pigs and cows on the 30 acres attached to the hall. 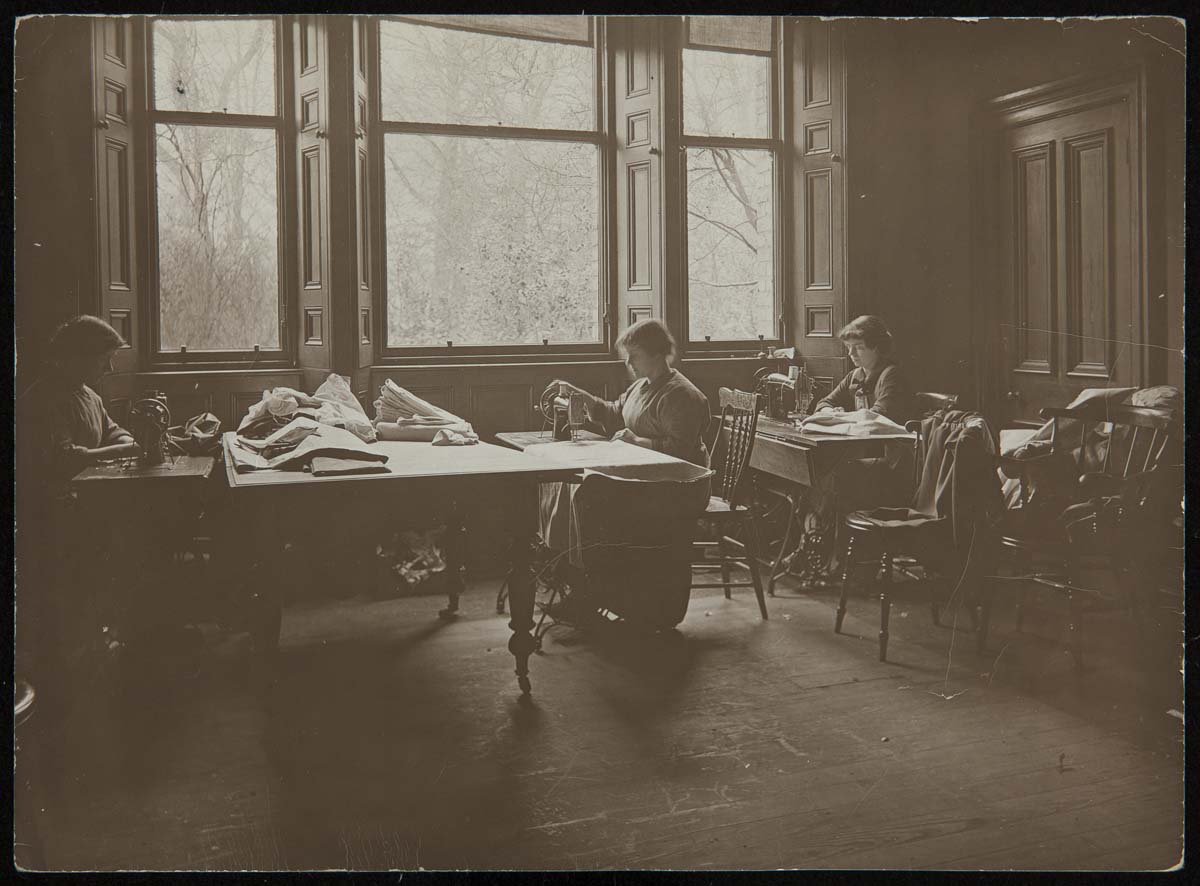 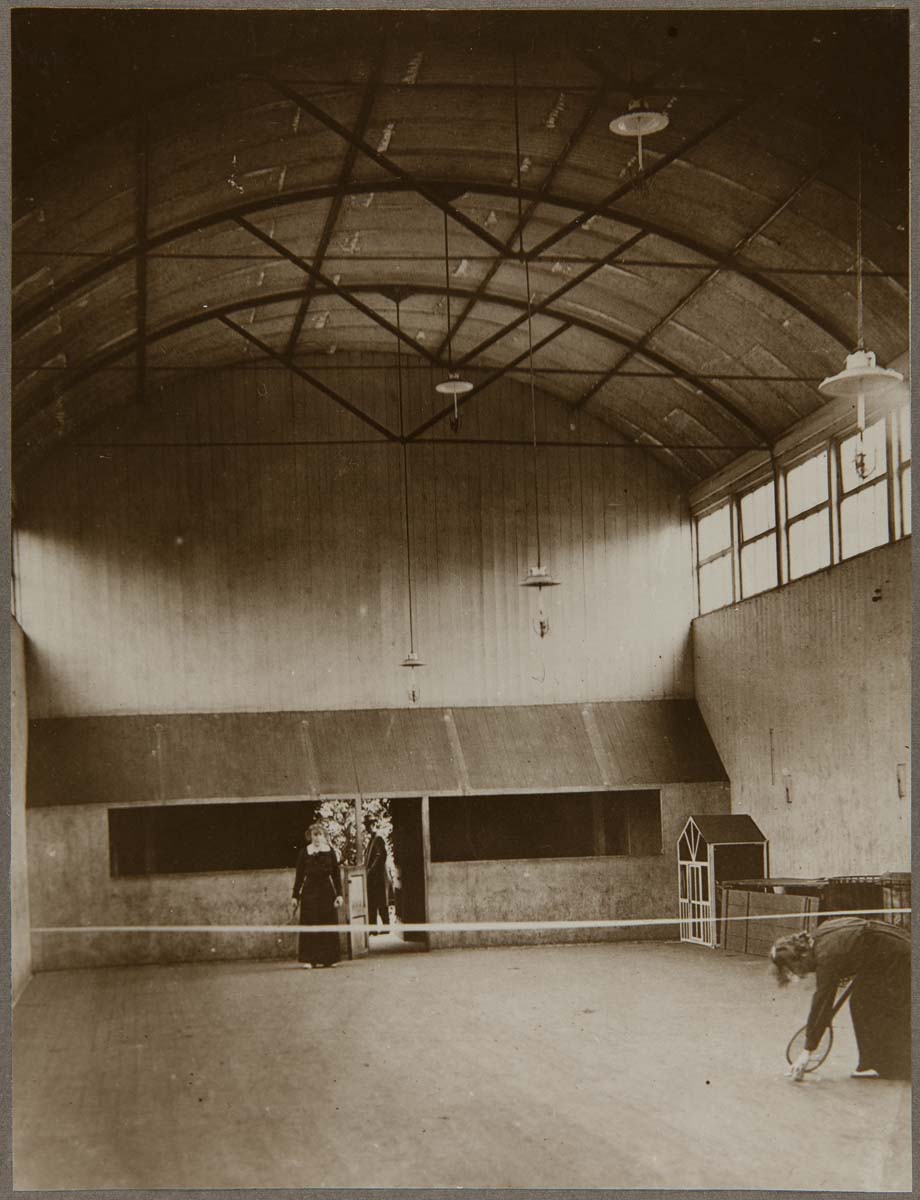 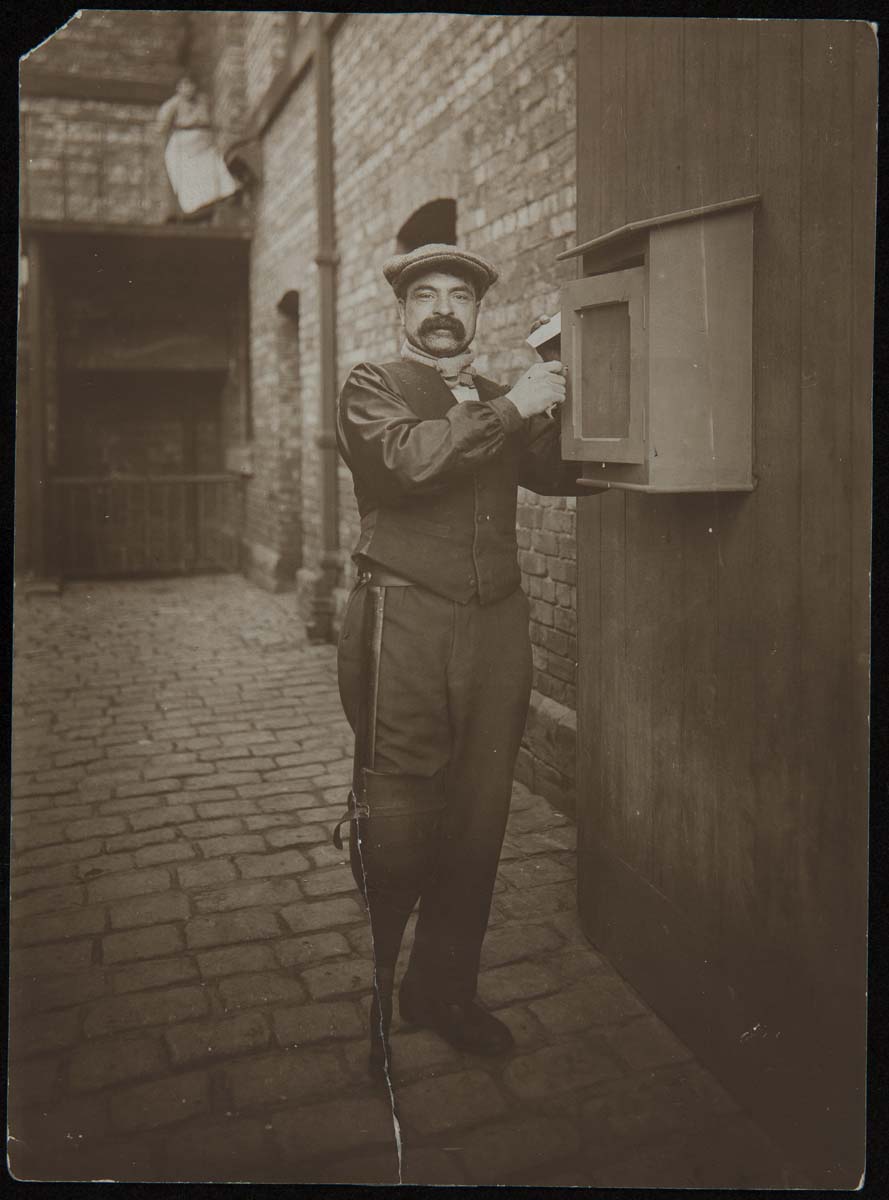 Perry and his wife, Katie, spent countless hours arranging for the lease, administrating the house, and seeing to the needs of the refugees. They donated much of their own furniture and clothing, “Katie and I have both taken all of our clothes, excepting those that we are actually wearing – both suits and under-clothes – and used them for fitting out some of these poor people.” Perry also requested the Fords send their second-hand clothing to the refugees as well “if it is not too much trouble, it would be nice to receive from you any old clothes of Edsel’s or Mr. Ford’s which could be spared…Such clothes would be of much better quality than we can think of buying, and would further more save money,” a request the Fords followed through with (although only one woman in the hall could fit into Clara’s shoes). However, not all the refugees’ needs were met immediately. When the boiler went out in 1915, Perry refused to pay for a new one as they were only renting, demanding the landlord replace the unit, but it took the landlord sometime to make up his mind and “meanwhile the poor Belgians are very cold.” The money the Fords provided not only furnished the house, and provided food, but also bought clothing, toiletries, and basic items for the refugees (many of whom had left the country with no extra clothes or personal possessions) as well as provided the refugees with pocket money from $0.50 - $1.00 each per week. Perry also purchased subscriptions for magazines and rented a piano and gramophone (asking Edsel Ford to send along any old records). Because the first refugees moved in around Christmas the Perry’s purchased a Christmas tree, decorations, and small gifts for the children.

By 1918, because of war rationing, Perry was forced to reduce the number of refugees in the home and stop taking in new refugees; he proposed to the Fords to gradually start winding up the project and close down Oughtrington Hall. The chapel, priest, and doctor had all left by this time and Perry stated only families with children were left. Perry wrote Clara, “I feel that the conditions under which you have, for so long, rendered help to Belgian Refugees in this country, have materially changed; so much so, that it is probably true to say that there are no Belgian refugees in the same sense that there were three years ago.” He went on to add most of the refugees had found work and had become part of community, the others he believed should be taken care of by the government. Over the three years of operation a constant flow of hundreds of refugees came and went through Oughtrington Hall, the number of refugees fluctuated but appears to have stayed around 100 for the most part. Many found jobs, some at the Ford Manchester plant, and moved into homes of their own, or a relative in Belgium sent them money so they could establish their own residence. In July 1918, Perry transferred administration of the hall to the Manchester Belgian Refugees Committee along with the furniture and all equipment in the house.