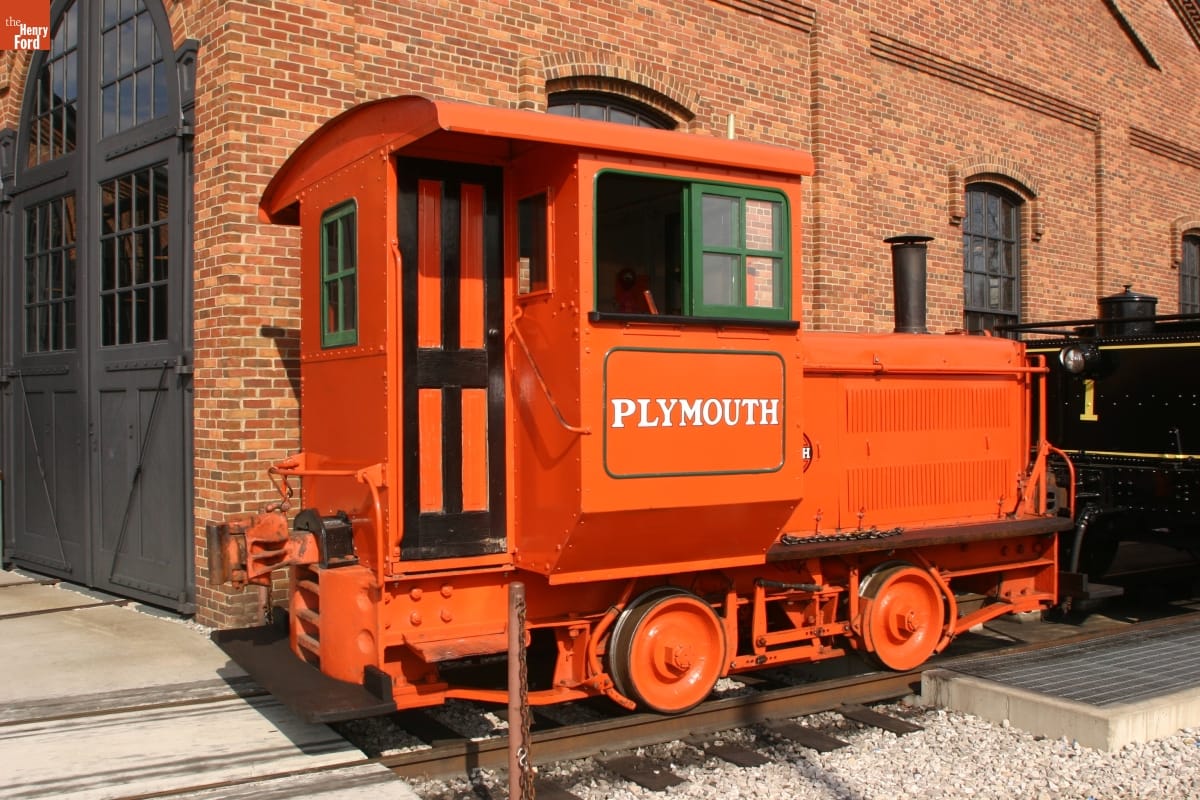 An unsung hero on our railroad: the 1927 Plymouth Gasoline-Mechanical Locomotive. / THF15920

When you think of the railroad locomotives in Greenfield Village, you probably picture one of our operating steam locomotives, or maybe the diesel-electric that occasionally steps in to pull passenger trains. You might even picture the Atlantic type steam locomotive inside the Detroit, Toledo & Milwaukee Roundhouse that you can walk underneath. But there’s another important member of our fleet that’s easy to overlook: our 1927 Plymouth Gasoline-Mechanical Locomotive.

Even as trucks and highways spread in the first half of the 20th century, industrial America largely still ran on rails. Manufacturers relied on railroads to bring in raw materials and ship out finished goods. The largest factories had extensive railyards filled with cars that needed to be shuttled around. Raw materials used by those factories were supplied by extractive enterprises like mines, quarries, and logging operations that operated internal railroads of their own. Clearly, there was a market for reliable, easy-to-operate locomotives that could be used on these private industrial railroads.

The J.D. Fate Company got into that market in 1914, building diesel and gasoline locomotives under the “Plymouth” brand (named for the company’s hometown of Plymouth, Ohio). Five years later, the firm combined with Root Brothers Company to form the Fate-Root-Heath Company. The newly-merged business manufactured brick and tile-making machinery, hardware and grinders, farm tractors, and—of course—light industrial locomotives.

What made Plymouth locomotives so simple and reliable? Our 1927 example is a gasoline-powered, mechanically driven machine. Its powertrain has more in common with the family car than with a steam locomotive. Steam locomotives burn coal in order to heat water and produce steam. That steam is fed into cylinders, where it pushes pistons that move rods that, in turn, move the driving wheels. Steam locomotives require specialized knowledge and skill to operate. 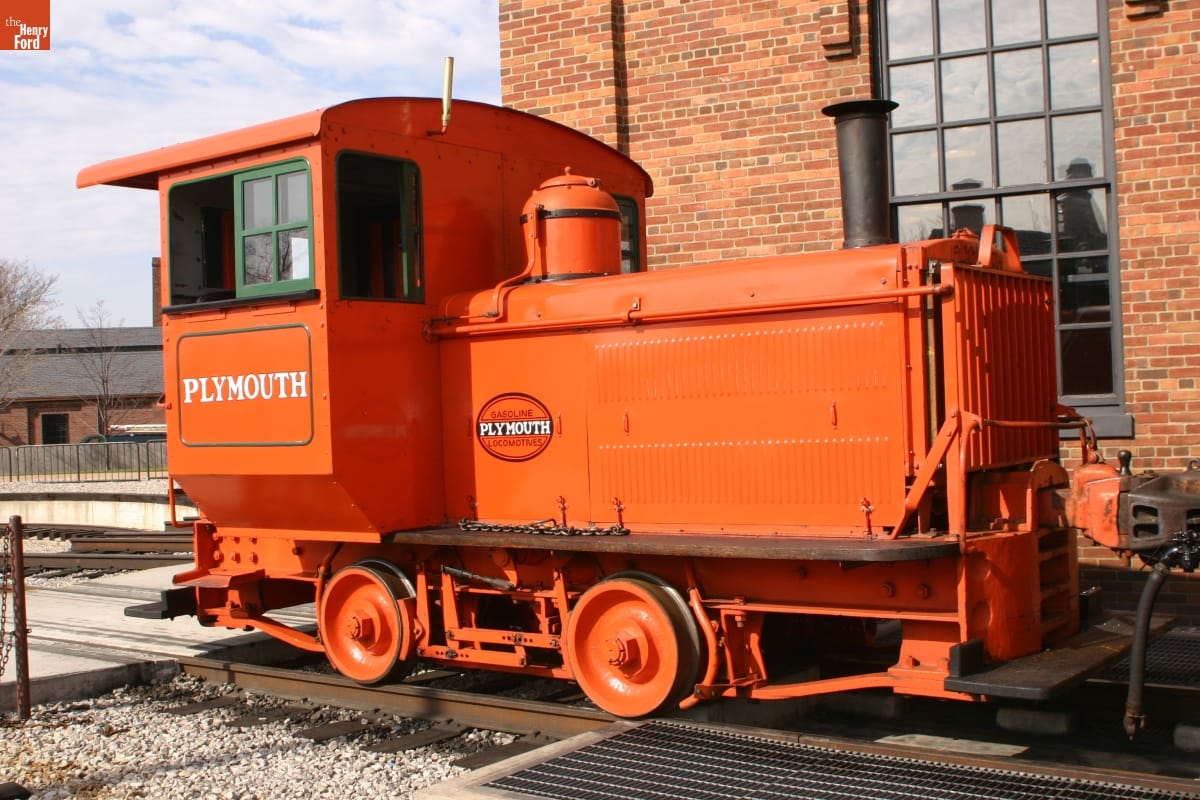 “Plymouth Gasoline Locomotives”—both the brand and the fuel are clear in this photo. / THF15919

Our Plymouth locomotive is powered by an inline six-cylinder gasoline engine. While it’s larger than what you’d find in a typical car (the Plymouth engine’s displacement is around 1,000 cubic inches), it operates under the same principle. Gasoline is fed into the cylinder and ignited by a spark. The resulting explosion pushes a piston that turns a crankshaft that, via a transmission, turns the driving wheels. And, like an automobile, the Plymouth’s transmission includes a clutch and a four-speed gearbox. If you can drive a car, then you can quickly learn to operate a Plymouth locomotive.

No two industrial railroads were the same, so Plymouth manufactured locomotives in multiple configurations. Track gauge—the width between the rails—was the most important consideration for a Plymouth customer. Standard gauge on American mainline railroads is 4 feet, 8 ½ inches—or 56 ½ total inches. But many industrial operations used less expensive narrow-gauge track. Plymouth built to suit anything from standard gauge down to 18 inches. Furthermore, Plymouth’s spring suspensions and short wheelbases were well suited to rough track with sharp curves.

Over the years, Plymouth also offered different engines and drivetrains. While our locomotive burned gasoline, other Plymouth engines used diesel fuel. (Note that these diesel Plymouths were still mechanically driven. They should not be confused with diesel-electric locomotives, which drive their wheels with electric motors.) In the mid-1940s, Plymouth introduced smooth-running torque converter fluid couplings as an improvement over its earlier mechanical clutches.

Industrial railroads may have been Plymouth’s main customers, but they weren’t the only ones. The company also sold locomotives to temporary railways—those built and used for construction projects like dams, bridges, and highways. Plymouth locomotives were practical, flexible machines that served an important niche market. 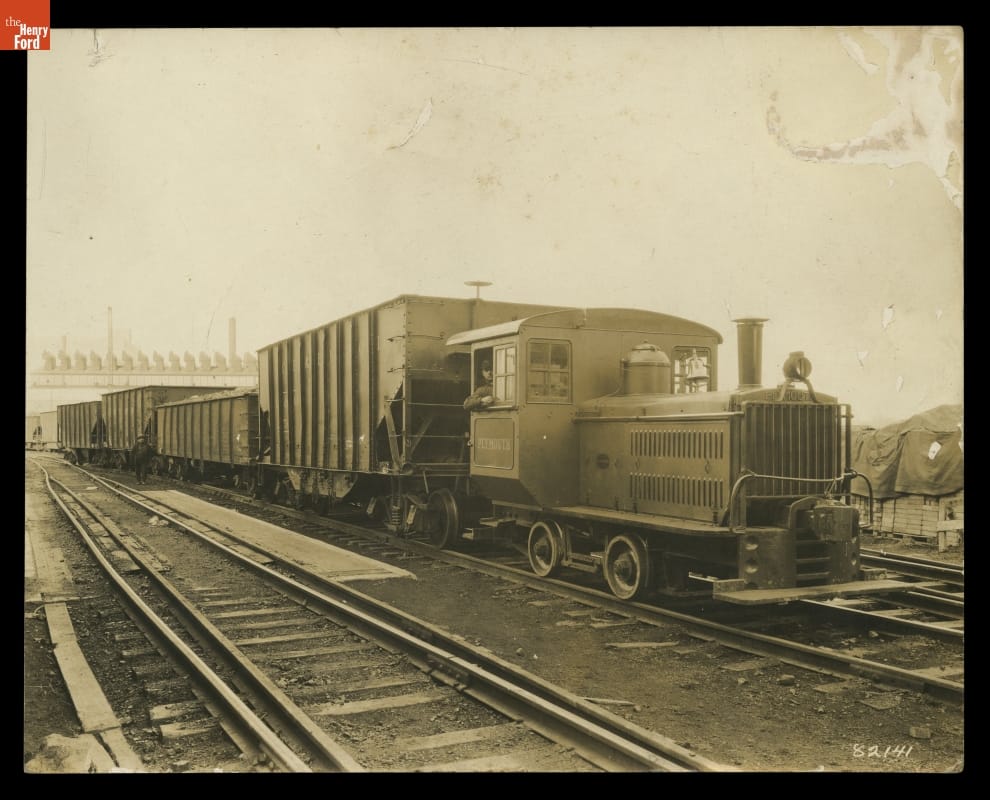 Our Plymouth locomotive was ordered by the Detroit Public Lighting Department—predecessor of today’s DTE Energy—in 1927 at a price of $6,800. It was delivered to the Mistersky Power Plant, a coal-fueled generating station located four miles southwest of downtown Detroit. The 14-ton locomotive spent the next four decades shuttling coal-filled hopper cars around the plant. The Plymouth was retired around 1970 and spent its last years at the plant sitting unused. It came to The Henry Ford in 1980. Today it’s used to move locomotives and cars around the roundhouse and yard in Greenfield Village—just the sort of job a Plymouth was designed to do.

As for the Fate-Root-Heath Company, it was acquired by Banner Industries in the 1960s and renamed Plymouth Locomotive Works. In 1997, Ohio Locomotive Crane bought the firm and, two years later, relocated it to Bucyrus, Ohio, not far from Plymouth. The company no longer builds new locomotives, but spare parts are made under license by other manufacturers. As for the work once done by Plymouth locomotives, while many shippers transitioned to trucks and highways, there are still industries that rely on rail transportation. Many of them now use motorized railcar movers—rubber-tired tractors with auxiliary flanged wheels and railroad couplers. These modern movers offer all the advantages of a Plymouth, but with greater flexibility.

There’s an interesting coda to our Plymouth’s story. Throughout its life at the Mistersky Plant, the locomotive was operated by engineer Charles Vaughn. Born and raised in Indiana, Vaughn moved to Detroit to work on the construction of the Mistersky facility. When that was done, he stayed on to operate the locomotive. Vaughn had no prior experience in railroading but, with an easy-to-run Plymouth, that wasn’t as issue. Mr. Vaughn remained at Mistersky for 45 years before retiring in 1972. In recognition of his long service, Vaughn’s co-workers presented him with the Plymouth’s bell and whistle as parting gifts. (The locomotive’s retirement came before Vaughn’s, so those safety appliances were no longer needed.) 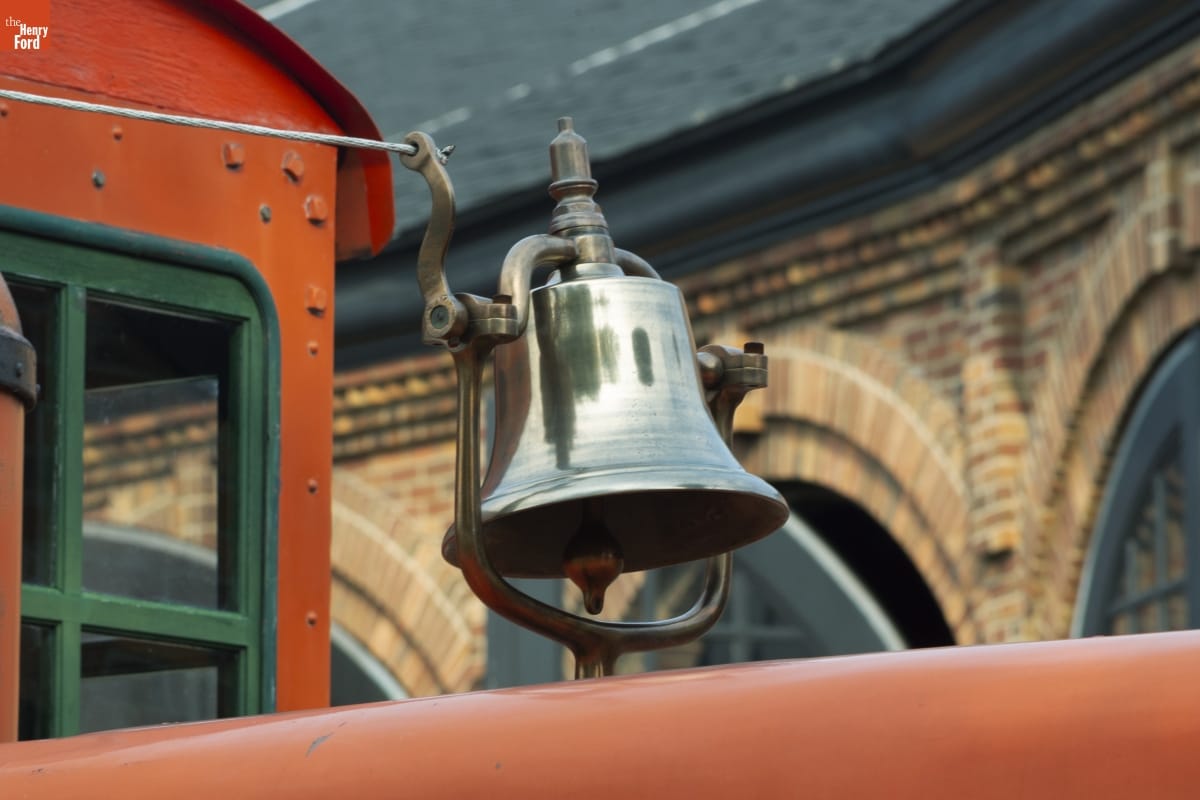 The Plymouth’s original bell, once a retirement gift and now reunited with the locomotive. / THF188367

Charles Vaughn passed away in 1982, but his family held on to the bell and whistle. In 2013, Mr. Vaughn’s family decided to reunite the items with the locomotive. They gifted the bell and whistle to The Henry Ford, and we put them right back onto the Plymouth. We’d like to think Mr. Vaughn would’ve appreciated that thoughtful gesture by his descendants—and the fact that Greenfield Village visitors can still see (and hear) the little locomotive with which he spent so much of his career.