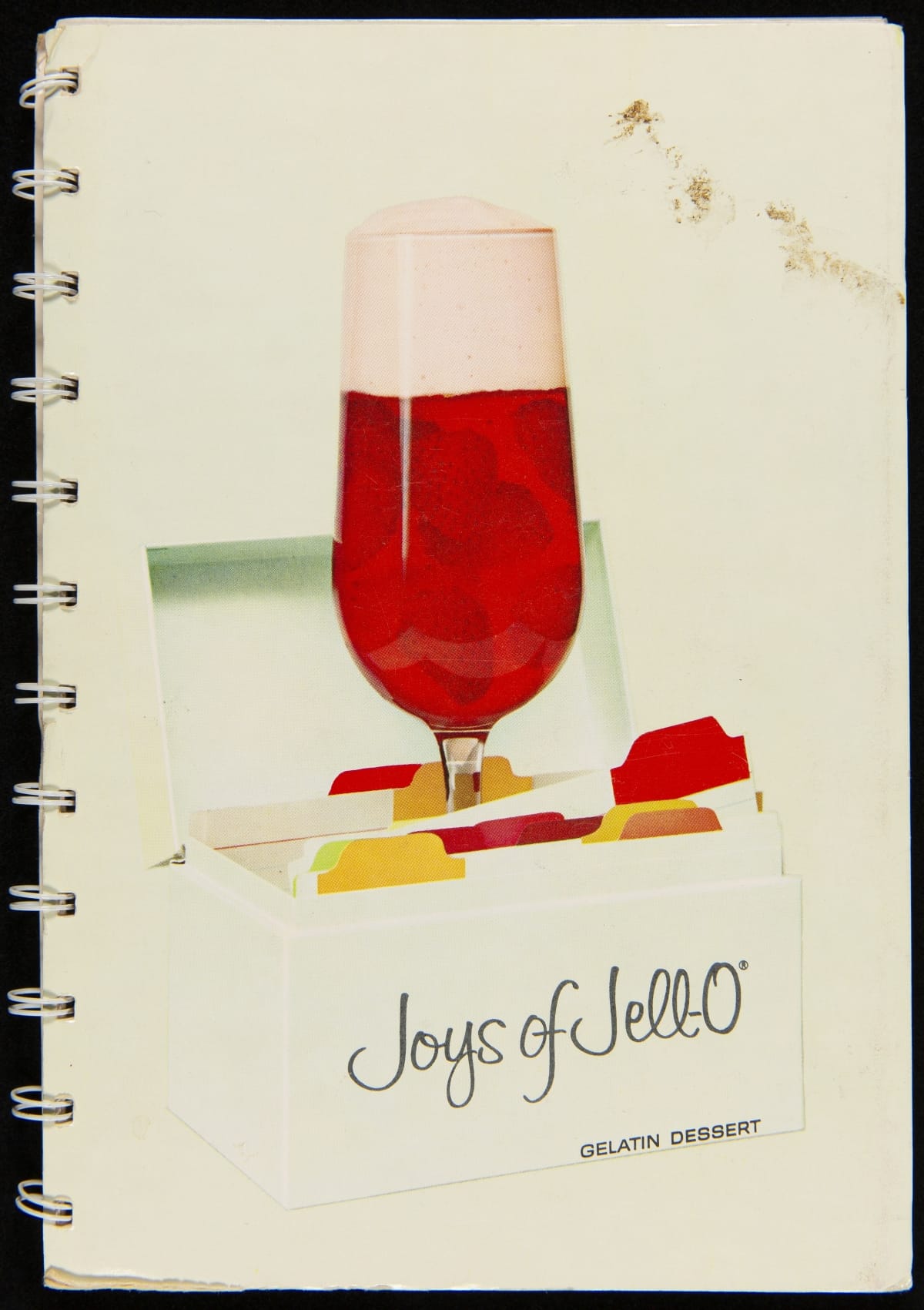 As Project Curator for the William Davidson Foundation Initiative for Entrepreneurship, I research objects within The Henry Ford’s collections that tell entrepreneurial stories. Most recently, I delved into the Recipe Booklet Collection, which includes recipe booklets and pamphlets from 1852-2006. In researching the many companies represented within the collection I became intrigued by the recipe booklets, and the entrepreneurial story, of the much beloved dessert: Jell-O. 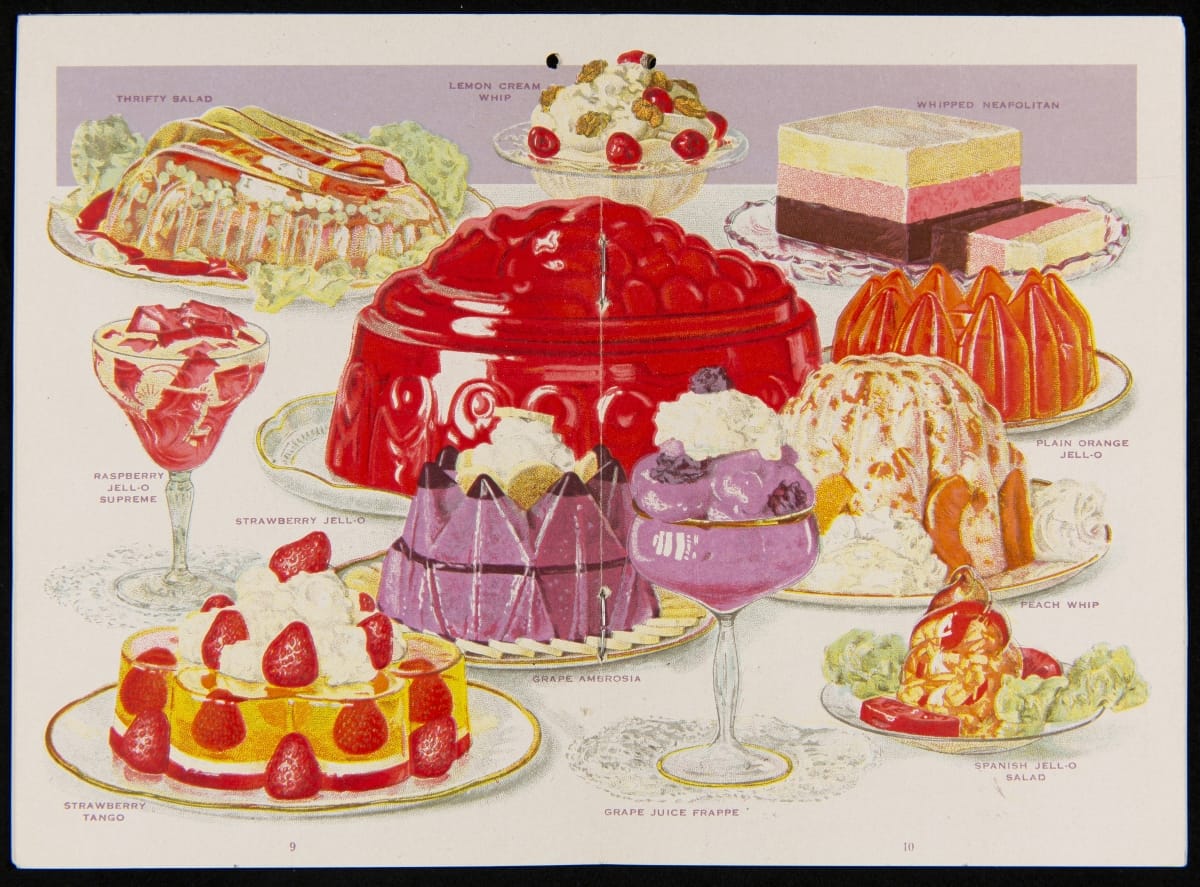 For more than a century, Jell-O has been served at family gatherings, pot-lucks, and barbeques, becoming an American icon.

Jell-O is made with two primary ingredients: sugar and gelatin. Gelatin is made by extracting collagen from boiled animal bones, hooves, and tissue. Known for its binding capabilities, gelatin has been used as a recipe ingredient for centuries, particularly for molded desserts. Originally, gelatin dishes were most common in wealthy households where servants could be tasked with the time-consuming and unsavory work of making gelatin.

Gelatin is odorless and flavorless, always an added ingredient to a recipe and never a stand-alone dish. Advances in gelatin production eventually led to its packaged powdered form – an innovation that erased the time-consuming preparation and made the product available to nearly everyone. Still, sugar and spices had to be added by the maker. In 1897, Pearle Wait, a carpenter and patent medicine producer, combined fruit flavoring and sugar with gelatin powder to create a pre-packaged fruit-flavored dessert that just required boiling water and some time to cool and set. Pearle Wait and his wife, May, were amazed by the delicious result and the couple believed it would thrive in the packaged food business. May is attributed with having given the Jell-O name to the new product. 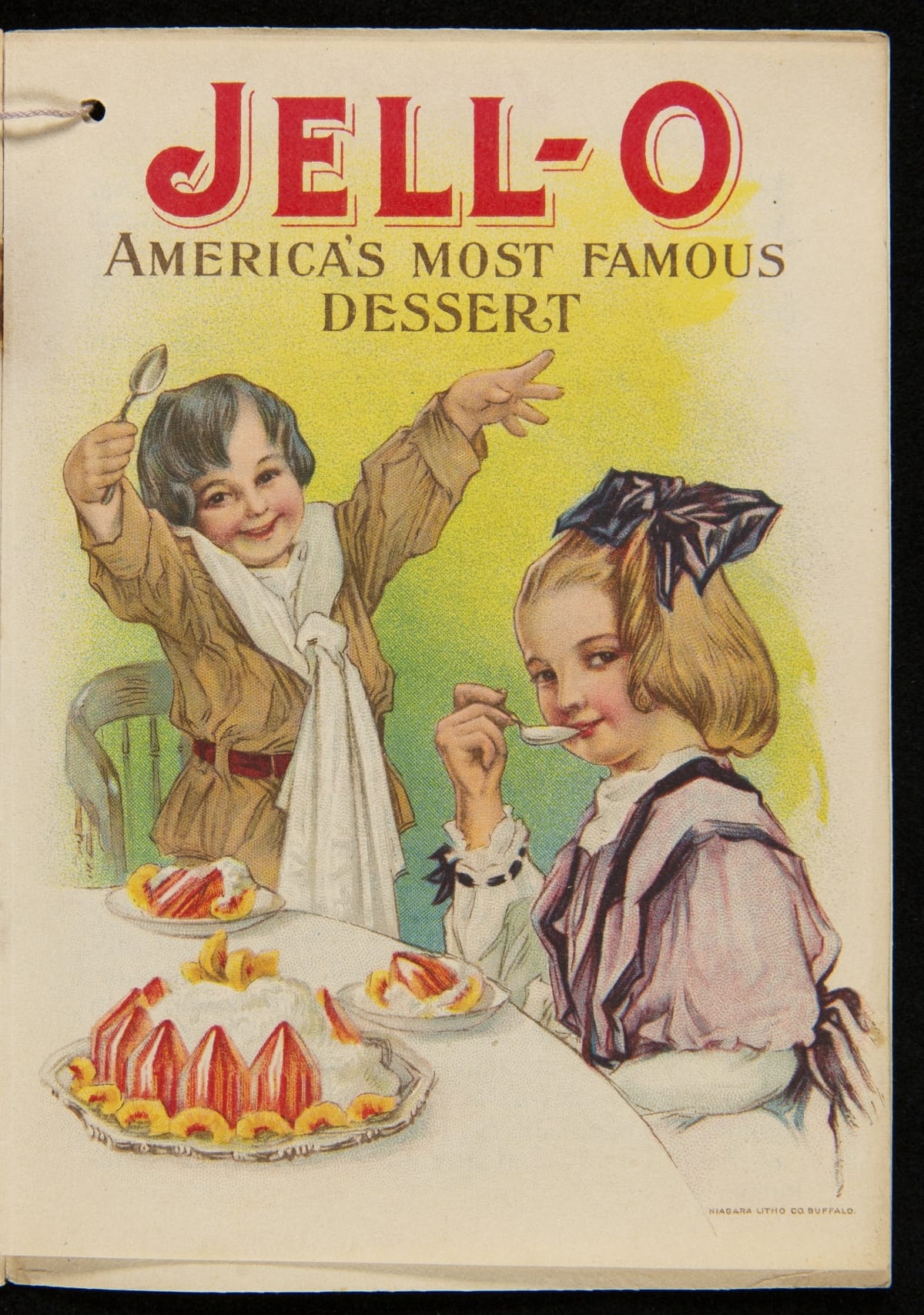 The name “Jell-O” followed a trend at the time of adding an “O” to the end of product names.

With a catchy name and what he thought was a product full of potential, Pearle Wait attempted to sell his new product door-to-door. Unfortunately, Wait lacked the resources necessary to market his innovation, let alone hire salesmen. Less than two years after creating Jell-O, Wait sold the rights to the product and name to a fellow patent medicine competitor, Orator F. Woodward, for $450.

As owner of the Genesee Pure Food Company, Woodward had already experienced success with his health drink, Grain-O. After acquiring the rights to Jell-O, Woodward quickly created advertising for the promising product, but he too struggled to make a profit. He was so frustrated by his lack of initial success that he offered the Jell-O rights to one of his employees for $35. The man refused, which turned out to be extremely fortunate for Woodward. By 1902, his struggling Jell-O business had become a quarter-million-dollar success.


Some believe that this slow start was due to the fact that homemakers prided themselves on their homemaking skills. Ready-made products, such as Jell-O, were looked down upon as too simplistic, requiring no skill. Ironically, the product owed its success to recipe booklets, which provided creative uses for this ready-made product. As early as 1902, booklets were distributed by finely dressed salesmen who went door-to-door on distinctive wagons drawn by well-groomed horses. Once every household in a given area had a recipe booklet, a salesman would go to the local grocer and advise him to stock Jell-O to meet the impending demand. The recipe booklets were a huge success. Jell-O became a household name as homemakers across the country marveled at the “magic” dessert that could be transformed into a colorful dish for any occasion. 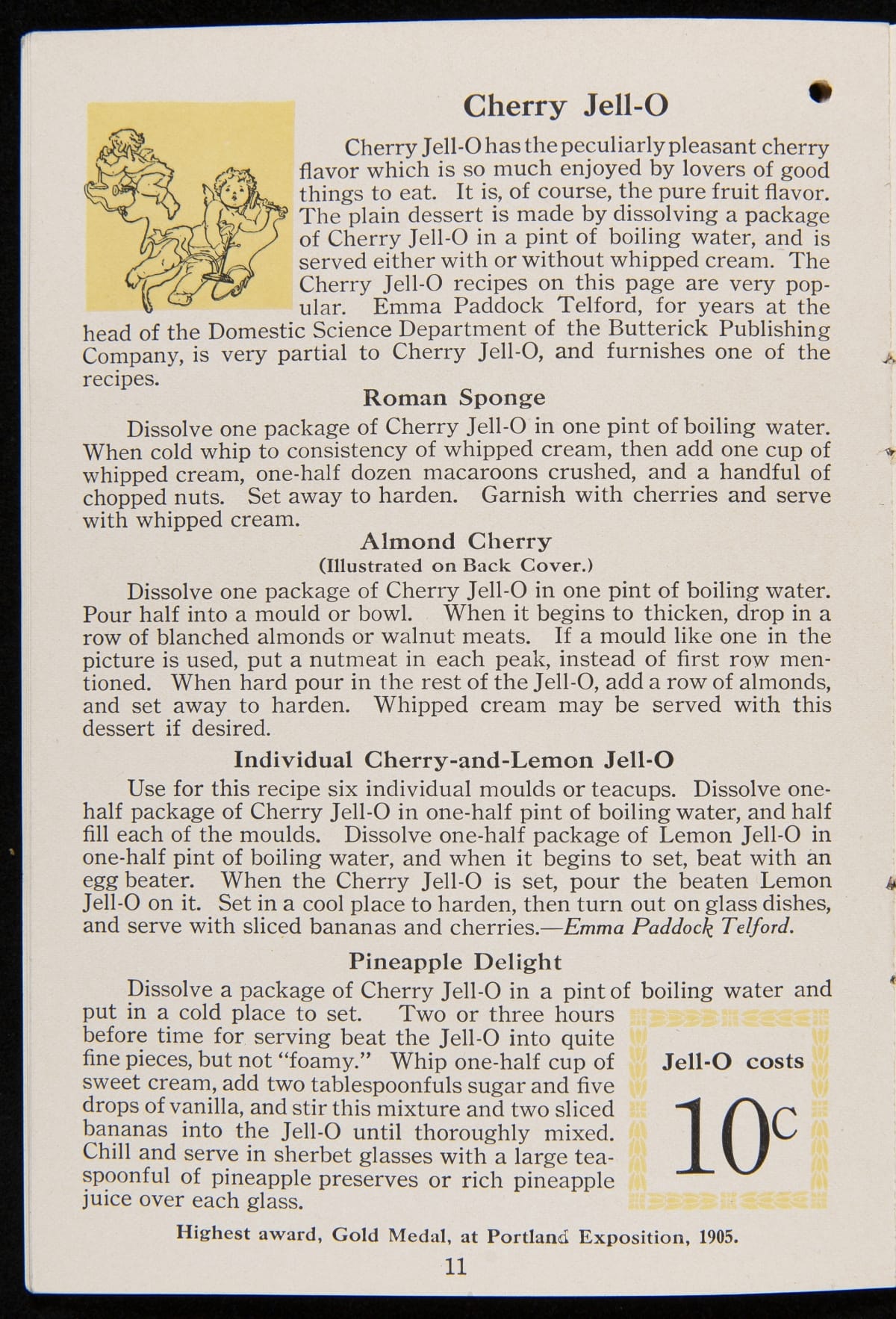 Jell-O booklets included recipes for a variety of desserts. Some recipes called for additional ingredients of whipped cream, or fresh or canned fruit, while others suggested homemakers use a gelatin mold or specialty serving dishes for a beautiful, sophisticated presentation. 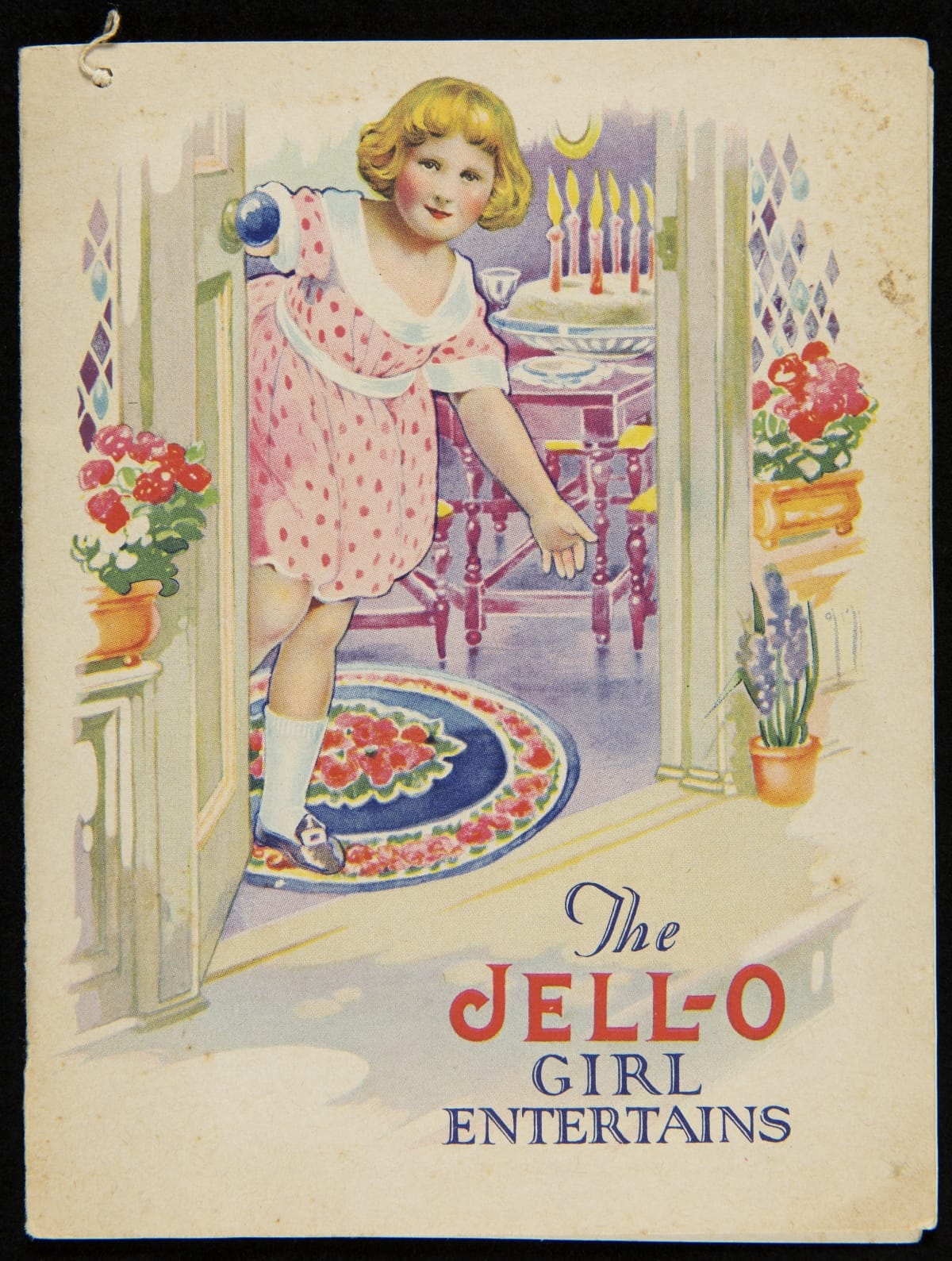 Jell-O introduced one of its most successful marketing strategies, the Jell-O Girl, in 1904. She helped reinforce the idea that children loved Jell-O and proved that it was easy to make – so easy a child could do it. In this booklet, the Jell-O Girl tells readers that she’s hosting a party and wants to serve her favorite dessert, Jell-O. The booklet includes the Jell-O Girl’s favorite party recipes and describes tips every hostess should know. 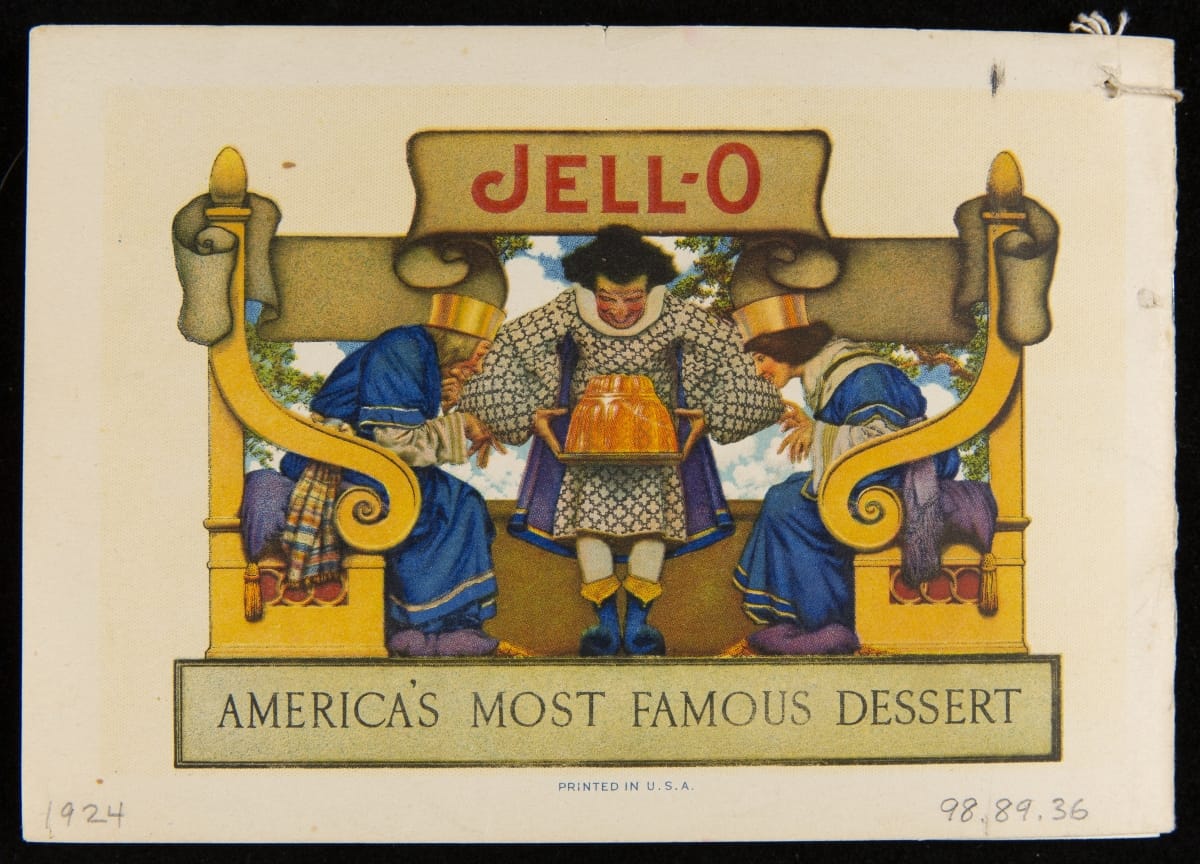 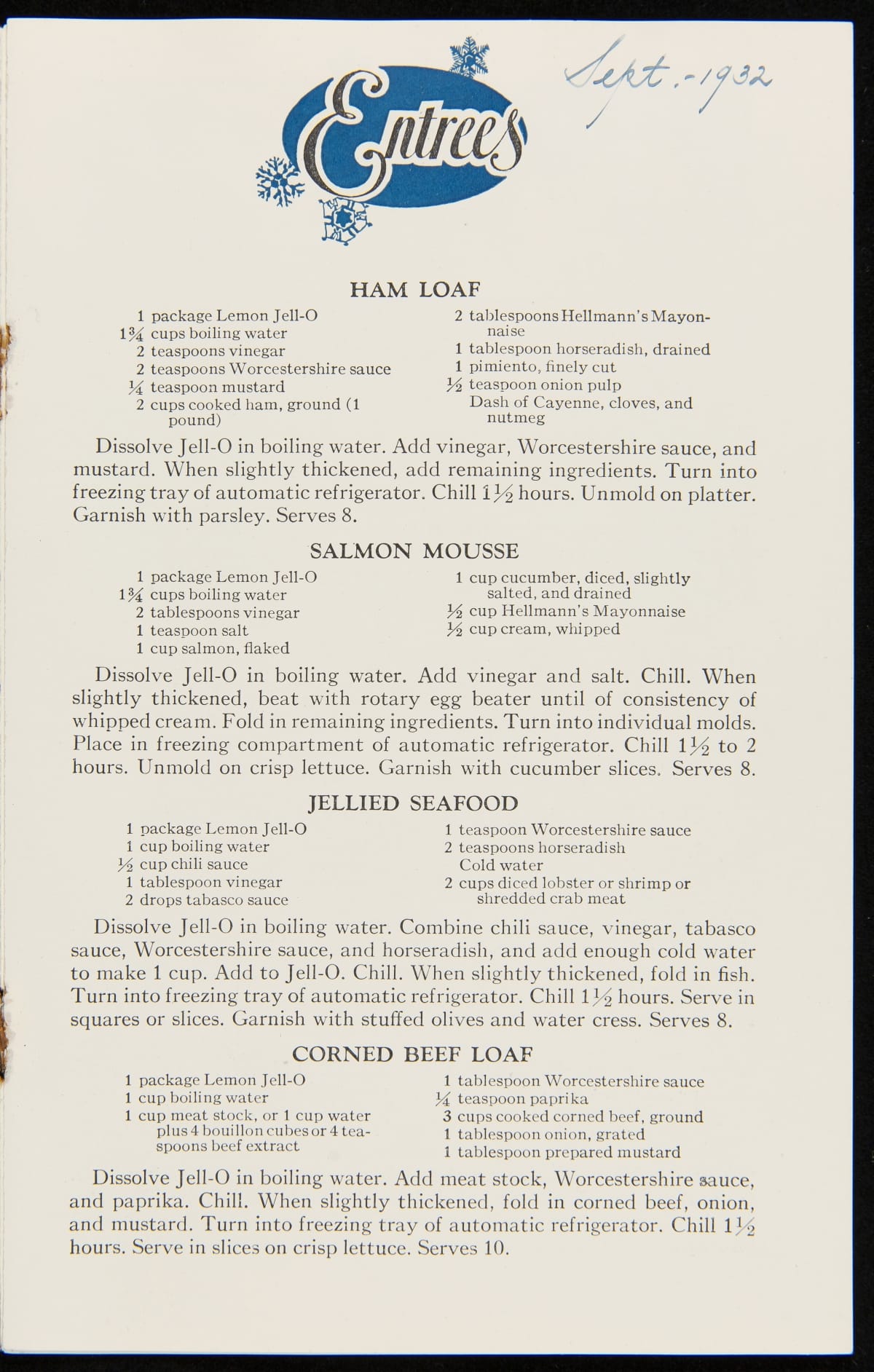 Although Jell-O became known as “America’s Most Famous Dessert,” it was also suggested as an ingredient in appetizers, molded vegetable salads, and entrées. 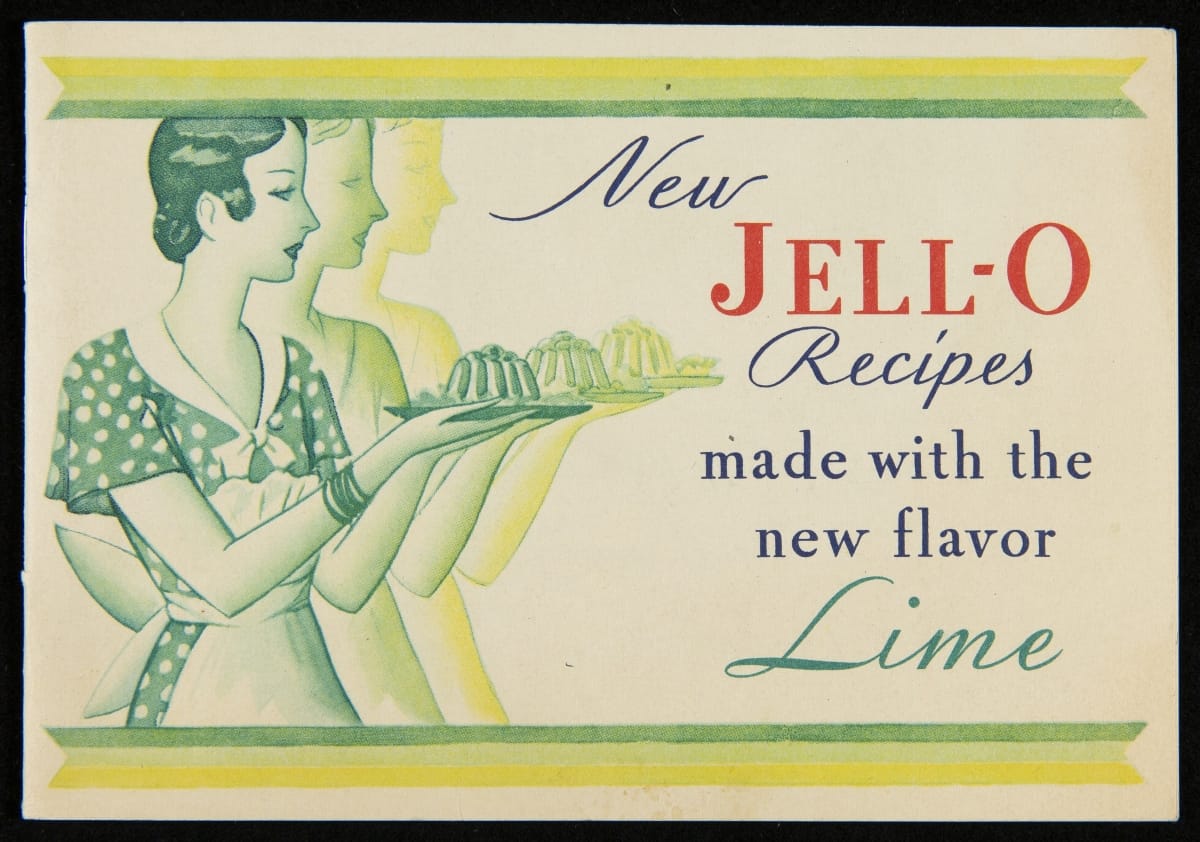 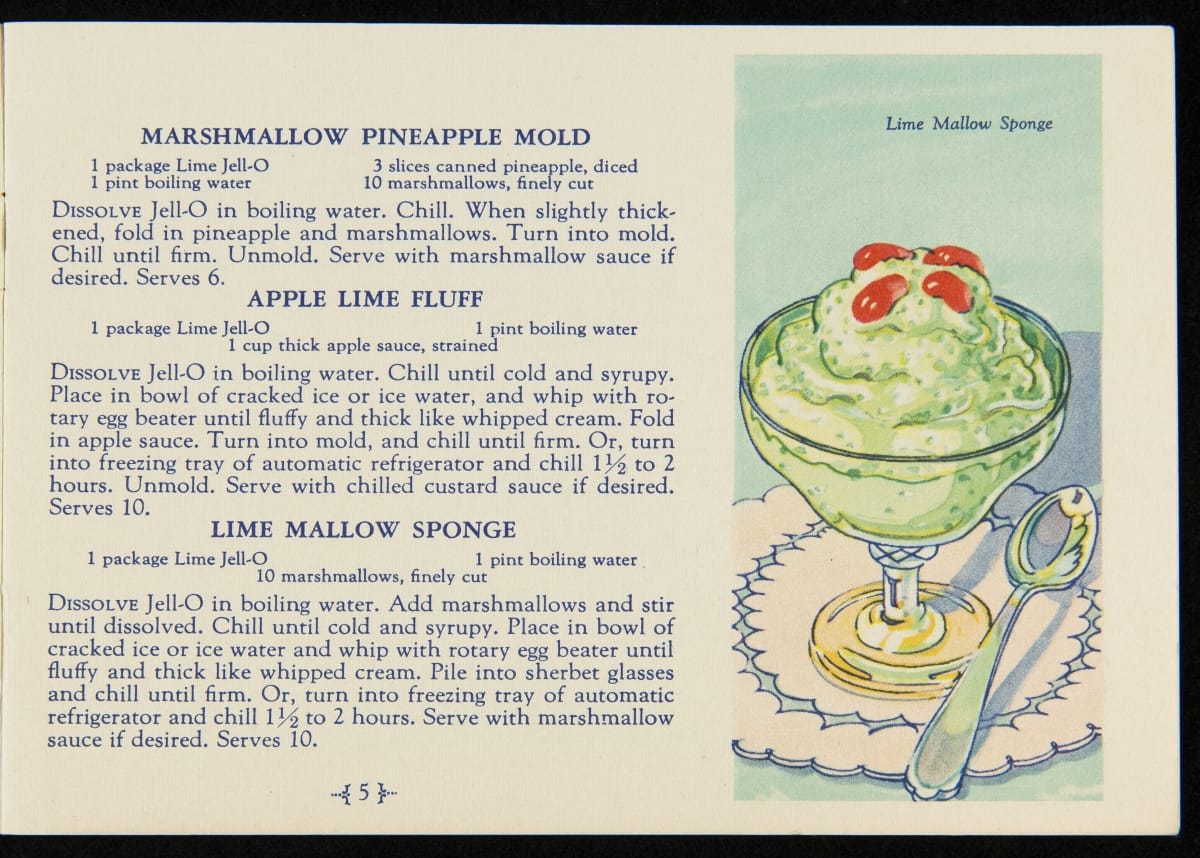 Cover and page from the recipe booklet, “New Jell-O Recipes Made with the New Flavor Lime,” Circa 1930 THF294532

In 1897, Jell-O was sold in four flavors: Strawberry, Raspberry, Orange, and Lemon. By 1906, the Genesee Pure Food Company introduced Cherry and Chocolate, with Peach following soon after. Lime Jell-O debuted in 1930.

By 1923, Jell-O sales had far surpassed the Genesee Pure Food Company’s other ventures, prompting the company to formally change its name to the Jell-O Company. Two years later, in 1925, the Jell-O Company Inc., was sold to Postum Cereal Company, Inc., which would later become part of the large conglomerate General Foods Corporation.

Samantha Johnson is Project Curator for the William Davidson Foundation Initiative for Entrepreneurship at The Henry Ford. Her favorite Jell-O recipe is for what her mother calls “Raspberry Fluff,” made with cottage cheese, Cool Whip, and a dry Raspberry Jell-O package.