In the face of a challenge, a walk is one of the best ways to jump-start imagination and pave a creative path forward. Take that walk in nature, or, better yet, spend a few days in nature without technology, and research shows our problem-solving abilities soar by as much as 50%.

Inventors and problem solvers need a constant supply of potent inspiration. Books and journal articles, as well as brainstorms with mentors, colleagues, and friends, help. However, in many instances our greatest teacher lives right outside our doors. There, we can find knowledge, wisdom, experience, and a solid track record of success. Nature has the answers we need to solve every problem—if only we know where to look and how to ask the right questions. 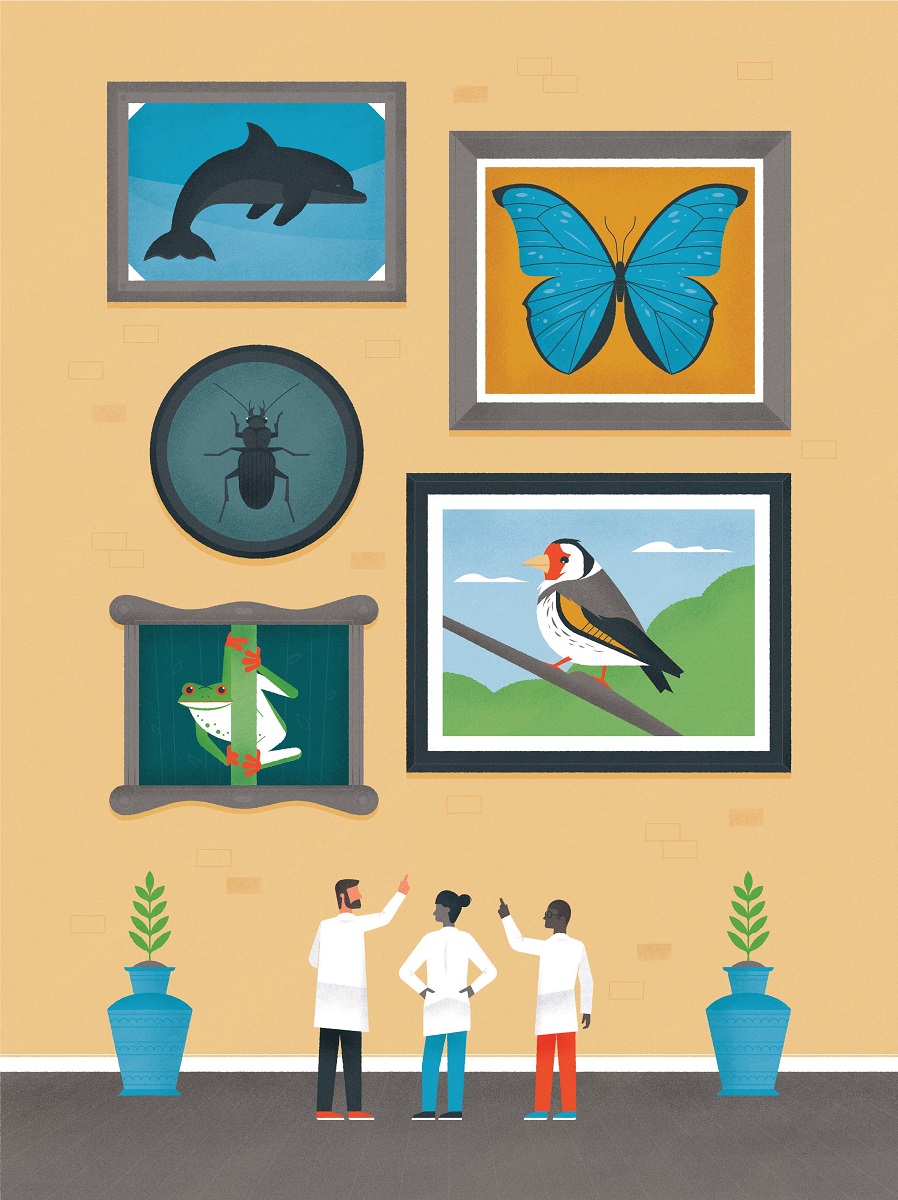 Illustration by James Round

Biomimicry is innovation inspired by nature. Whether we’re working on a challenge related to product development, process generation, policy creation, or organizational design, one of the smartest questions we can ask is: “What would nature do?” Asking this question, and then studying nature to find the answers, is a way to discover new sustainable solutions that solve our design challenges without negatively impacting the planet.

Undoubtedly, biomimicry is best learned by doing. It’s a field that requires us to open our eyes, ears, and hearts as we roll up our sleeves to dig deep (sometimes literally into the dirt) to understand, interpret, and then utilize nature’s design principles to solve the challenges we face in our lives.

“Biomimicry applies strategies from the natural world to solve human design challenges,” said Alexandra Ralevski, Ph.D., director of AskNature at the Biomimicry Institute based in Missoula, Montana. “This is a field that has the power to radically transform any industry.”

Being a Bridge: Janine Benyus and the Biomimicry Institute

With varied fields of expertise, including scientific knowledge, business planning, design thinking, and operations, to name just a few, practitioners of biomimicry serve as the bridge between professional groups like scientists, business managers, policymakers, engineers, and designers, who are often siloed from one another.

If all the world is an orchestra of voices, those who study biomimicry are the conductors making room for each of them, ensuring that they rise, shine, and harmonize together for the benefit of all.

It’s impossible to utter a single word about the theory and practice of biomimicry without paying homage to Janine Benyus, a biologist, author, innovation consultant, and self-proclaimed “nature nerd.” Benyus’ groundbreaking book, Biomimicry: Innovation Inspired by Nature, has made its way onto bookshelves and into the hearts, hands, and minds of problem solvers. 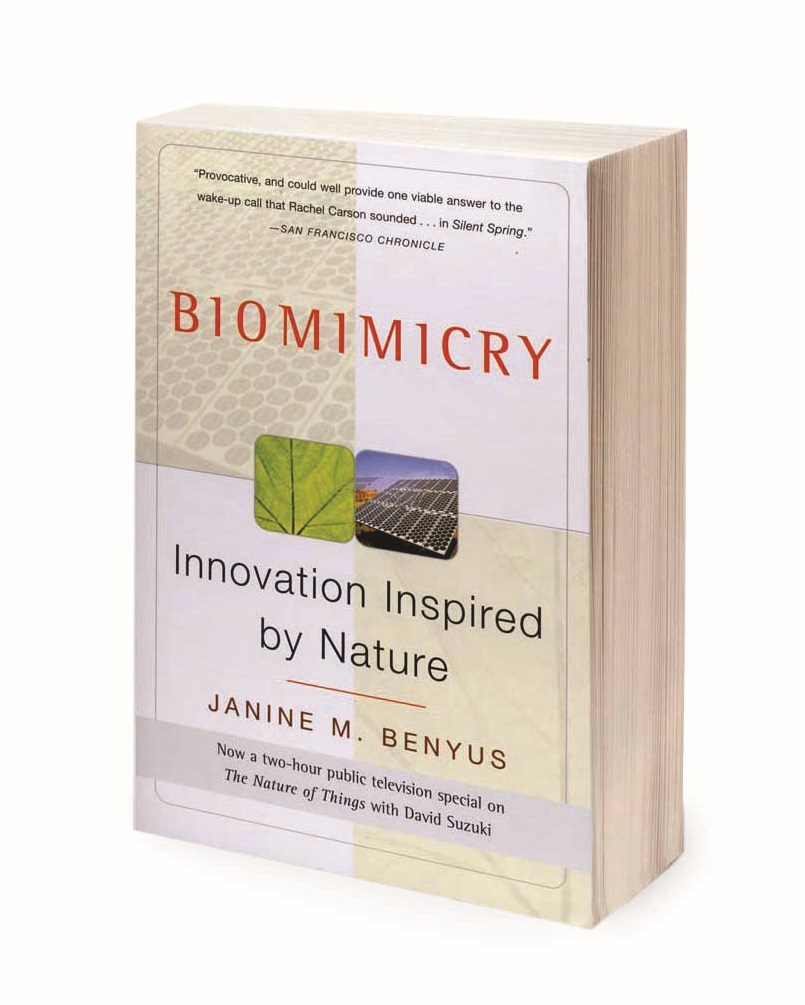 “We’re awake now,” she said. “And the question is, how do we stay awake to the living world? How do we make the act of asking nature’s advice a normal part of everyday inventing?”

To explore this question and bring passionate and multitalented collaborators into community with one another, Benyus co-founded the nonprofit that would become the Biomimicry Institute in Missoula, Montana.

Over a decade later, the organization continues to provide education, support, and innovation inspiration for anyone and everyone who wants to bring the study and application of nature’s design genius into their work and into their lives.

One of the best ways to illustrate biomimicry’s power is to look at some examples.

A trio composed of a marine biologist, a mechanical engineer, and an entrepreneur created the most efficient fans and turbines in the world through inspiration found in humpback whales. On the surface, this may seem like an odd connection. How could humpback whales possibly teach a highly skilled group to build a turbine? It turns out that these whales were experts at the exact function these humans wanted to achieve. 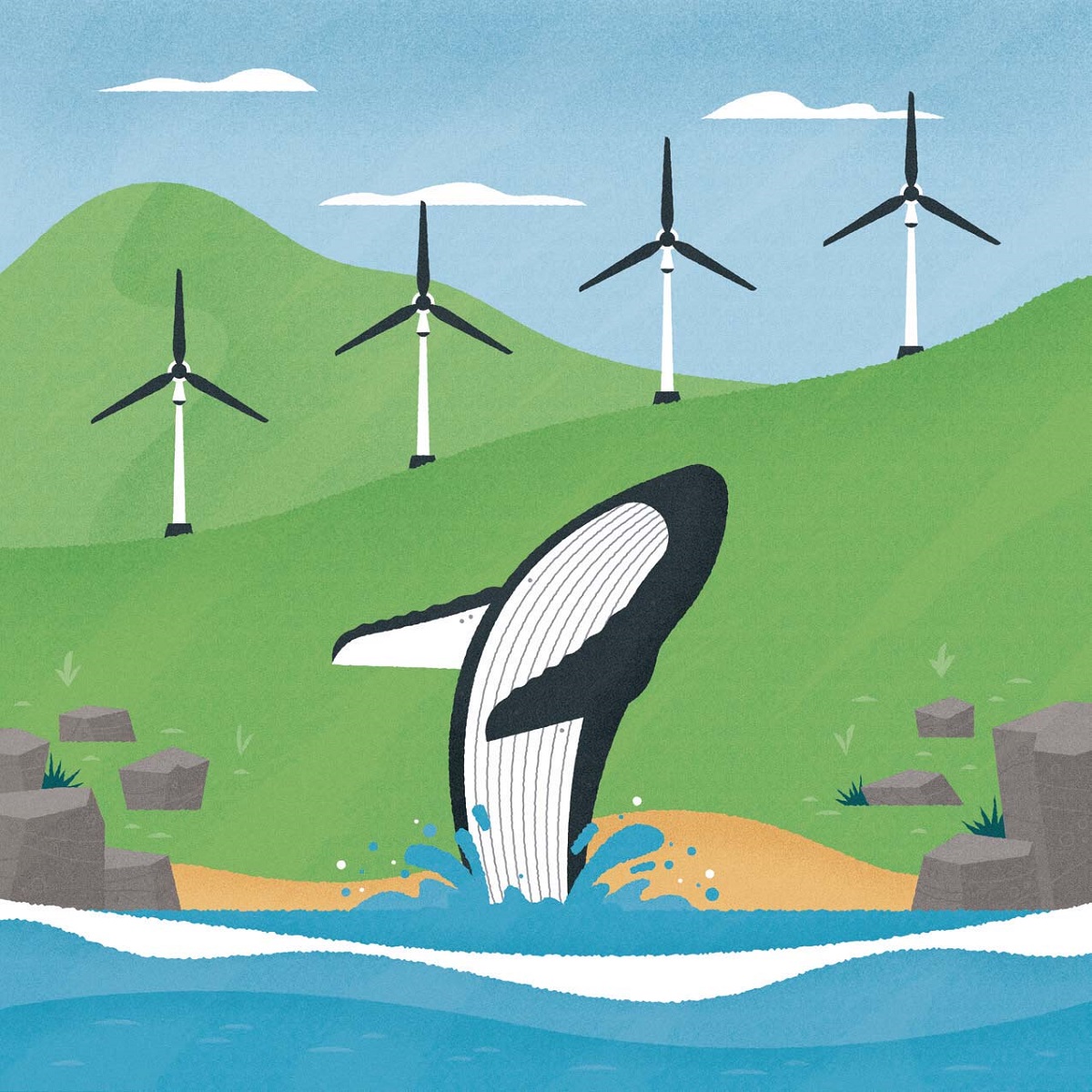 The bumps on a humpback whale’s flipper are nature’s answer to what makes a wind turbine extra efficient. / Illustration by James Round

Humpback whales are among the world’s most agile animals. Though they can reach 16 meters (52 feet) in length and 40 tons in weight, they can lift a large portion of their bodies up out of the ocean and into the air in an acrobatic feat that leaves whale watchers breathless. A single jump or leap (called a breach) requires humpback whales to expend only 0.075% of their daily energy intake. Not only is the breach a stunning display of athleticism, it’s also a remarkably efficient action.

Marine biologist Frank Fish suspected the bumps (called tubercles) on the leading edges of the whale’s flippers held the secret to bending the ocean waters to their will. Working with Fish to study this mystery was engineer Phillip Watts. “I had been working in biomechanics and understood the importance of biomimicry, drawing engineering ideas from evolution,” shared Watts.

Together, Fish and Watts found that humpback whales achieved a rare point of design greatness: The tubercles on their flippers could increase lift while simultaneously reducing drag—a genius combination that gives these magnificent creatures such remarkable agility.

Along with a third collaborator, entrepreneur Stephen Dewar, Fish and Watts decided to model their turbine design on the humpback’s flippers. Not surprisingly, their newly fabricated turbines not only produced supreme performance like the whale’s but were highly efficient. Soon after, the trio’s newly formed corporation, WhalePower, became a leading manufacturer of energy-efficient rotating devices for various applications.

“Because nature had done so much work on this [for us],” said Dewar, “we were able to understand what was possible.”

Transportation aficionados know that Japan’s Shinkansen, known as the bullet train, is one of the world’s finest examples of efficient and elegant design. What many people don’t know is that the Shinkansen has a bird to thank for its performance. Known for its silent diving abilities, the kingfisher can break the water while barely making a sound or a splash to claim its favorite meal—minnows and stickleback fish. 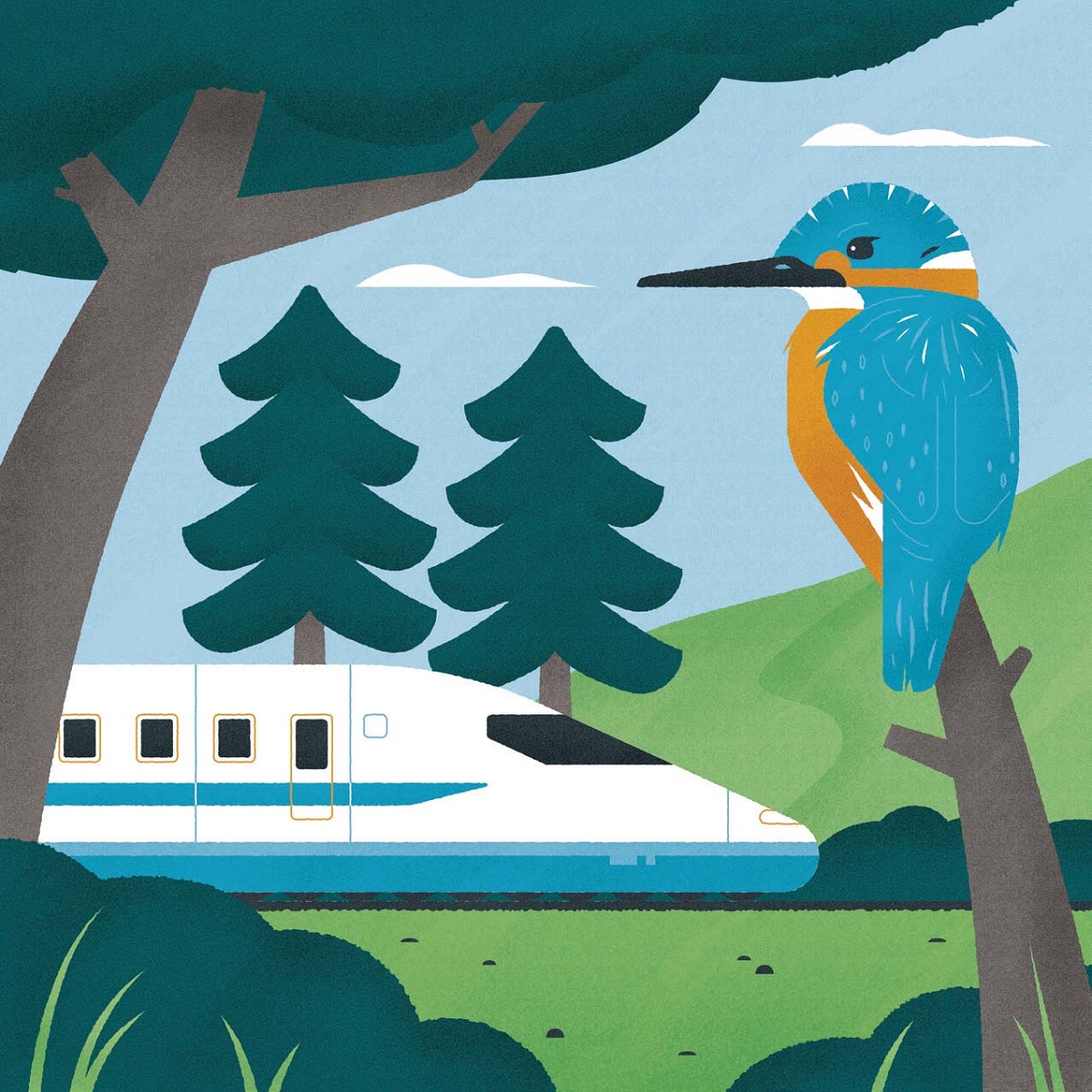 The sleek shape of a certain bird’s beak is nature’s answer to conquering a bullet train’s unwelcome sonic boom. / Illustration by James Round

Shinkansen engineers faced a serious structural challenge while designing the bullet train: It created a sonic boom as it emerged from tunnels at high speeds. One of the team’s engineers, who had observed the kingfisher’s precise diving technique, suggested they mimic the bird’s beak shape in the train’s design. Voila! The sonic boom disappeared. 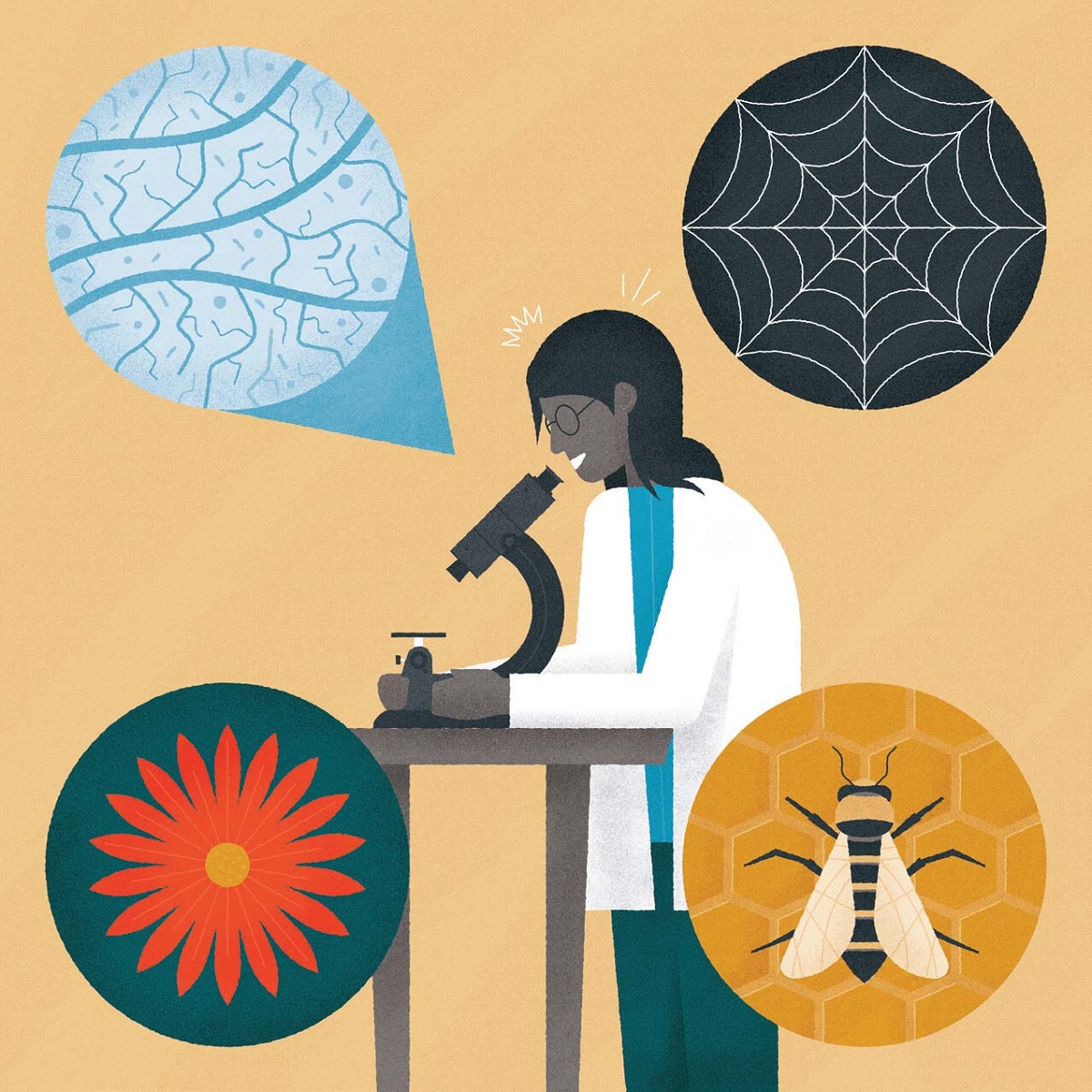 A beehive’s structure, a spider web’s power of attraction, and an ice plant’s water storage system are nature’s answers to creating more sustainable food systems. / Illustration by James Round

How does it strike this balance? AquaWeb takes its cues from the efficiency of nature, incorporating learnings from multiple organisms: beehives to create structural strength, spider webs to capture water, ice plants to store water and mycelium to distribute water.

Biomimicry also guided the strategy of Nucleário, winner of the Ray of Hope Prize, an initiative of the Biomimicry Institute and the Ray C. Anderson Foundation. Company founders wanted to repopulate the forests of their home country, Brazil, where young tree seedlings face overwhelmingly adverse survival odds. Their roots are choked by grasses while their leaves are devoured by leaf-cutter ants.

Of the small handful of trees that reach their first birthday, 95% don’t live to see their second. It’s these long-shot odds that Nucleário sought to combat.

Like NexLoop, Nucleário combined the designs of several natural models to create its tree seedling pods—from the protective abilities of leaf litter and water accumulation talents of bromeliads (think of a pineapple) to the graceful air dispersal skills of anemocoric seeds.

“Our connection to nature and deep-rooted gratitude for all life inspires and sustains us,” said Bruno Rutman Pagnoncelli, CEO and founder of Nucleário. “We look to nature to guide our decisions, from design to raw material selection and everything in between.”

Combining the natural models that inspired them, Nucleário’s founders have built a planting system that provides protection as well as nutrient and moisture maintenance with less human intervention and tending. Their design is both lightweight and strong, with water chambers that collect and distribute water the same way nature does. 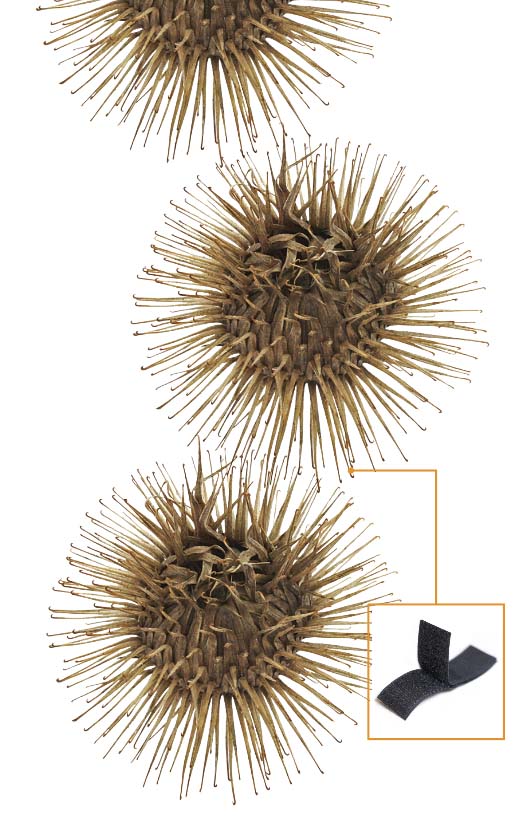 Burdock burrs inspired the creation of Velcro during the mid-20th century.

In 1941, Swiss engineer George de Mestral was hunting and noticed his pants were covered with burdock burrs. He wondered how the seedpods could hold on and took to his microscope, examining the burrs’ “hooks” and the way they clung to fabric. After years of research, de Mestral was granted a U.S. patent in 1955 for what became Velcro, his famous hook-and-loop fastener.

What’s Next in Biomimicry?

“Using nature as a model for sustainability means that we always have a benchmark for our designs,” said AskNature’s Ralevski. “This benchmarking is critical to determine success and improve our iterations.”

A hallmark of nature, and by extension biomimicry, is that there is a progression of continuous improvement over time within the context of a specific situation—which could include the geography, environmental circumstances, and economic situation in which a design solution must exist and operate.

“Biomimicry’s greatest legacy will be more than a stronger fiber or a new drug,” said Janine Benyus. “It will be gratitude and an ardent desire to protect the genius that surrounds us."

To explore some examples of biomimicry in artifacts from the collections of The Henry Ford, check out this expert set.


This post was adapted from an article by Christa Avampato in the June–December 2020 issue of The Henry Ford Magazine.