Horse-Drawn Vehicles in the Country 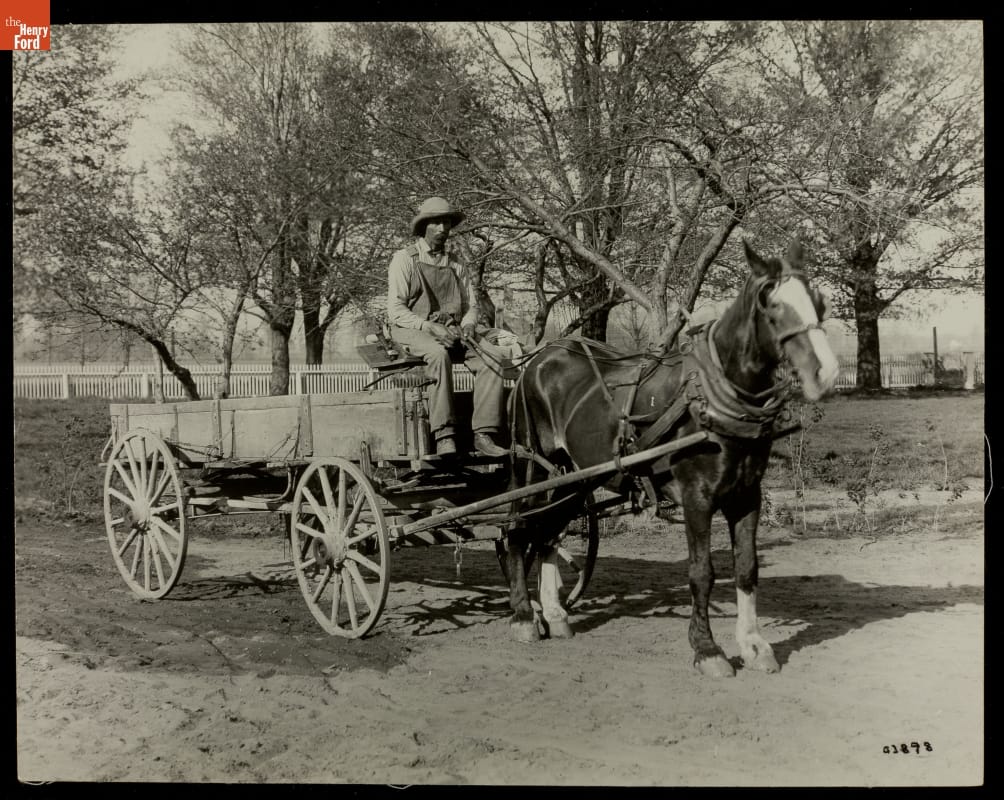 During the Carriage Era, while large American cities were crowded with horses, rural areas had fewer animals—but horses were just as important. In the country, horses were much less likely to be used for hauling people and more likely to pull farm equipment, such as plows and reapers, or to haul wagons loaded with hay, grain, cotton, or freight.

In large parts of the South, mules (the offspring of male donkeys and female horses) were preferred over horses. Mules are sterile and so cannot reproduce on their own, but live longer than horses. Southerners believed that mules withstood heat better than horses, though they are smaller and weaker than the large draft-horse breeds. Unlike horses, mules will refuse to be overworked. Their famous “stubbornness” is in reality a self-preservation method—when tired, they simply stop and will not resume their labor until their energy is restored.

Uses for Horse-Drawn Vehicles in the Country

At the beginning of the 19th century, rural horses were primarily employed in tilling the soil, pulling plows, harrows, and cultivators. But later in the century, inventive minds rolled out a steady stream of new farm equipment—reapers, rakes, binders, mowers, seed drills, and manure spreaders. Implements that could be pulled with one or two horses gave way to four-horse plows, eight-horse disc harrows, and giant combines pulled by 25 mules. In addition, every farmer needed one or more wagons for hauling crops to market or supplies from town.

For much of the 19th century, most farmers could not afford vehicles whose only purpose was hauling people. The family could always ride in a wagon. But by mid-century, light people-hauling buggies were cheap enough for some to afford. Mechanization caused their price to fall steadily, so that by the end of the century, one could mail-order a buggy from Sears or Montgomery Ward for $25. Well before Henry Ford’s Model T automobile, cheap carriages whetted people’s appetites for inexpensive personal transportation that did not depend on public conveyances running on fixed routes and fixed schedules. 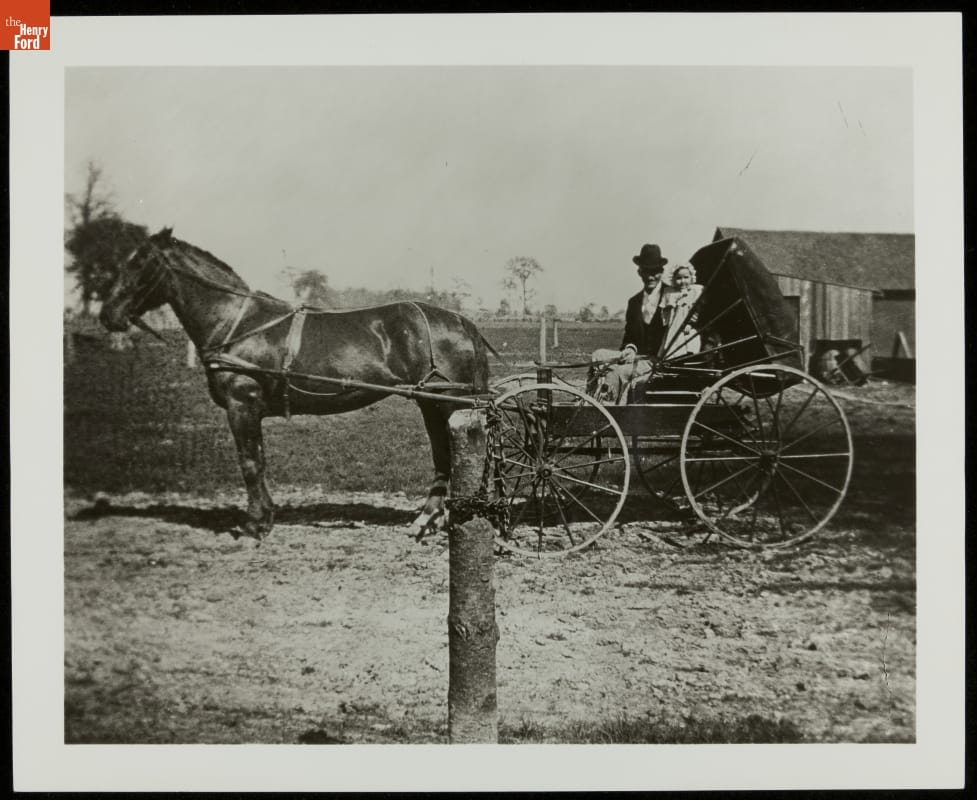 A good deal of commercial transportation also moved through the countryside. Stagecoaches carried passengers between towns and cities. Freight wagons hauled goods from depots to towns not served by railroads. Commodities like kerosene were distributed by wagon. 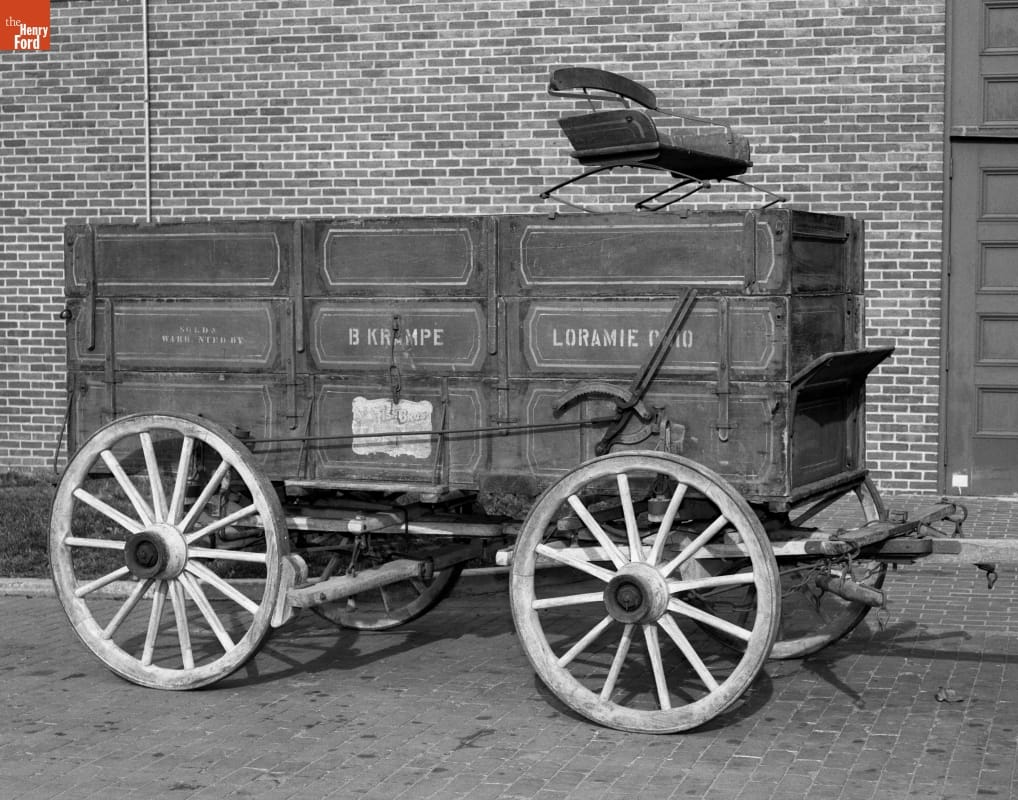 This is a typical, all-purpose farm wagon with a basic square-box body and a seat mounted on leaf springs. Wagons like these were usually drawn by two horses, and thousands were made by many companies across the country. Franz Eilerman of Shelby County, Ohio, bought this particular wagon, which is on exhibit in Agriculture and the Environment in Henry Ford Museum of American Innovation, in 1902 for his son, Henry. 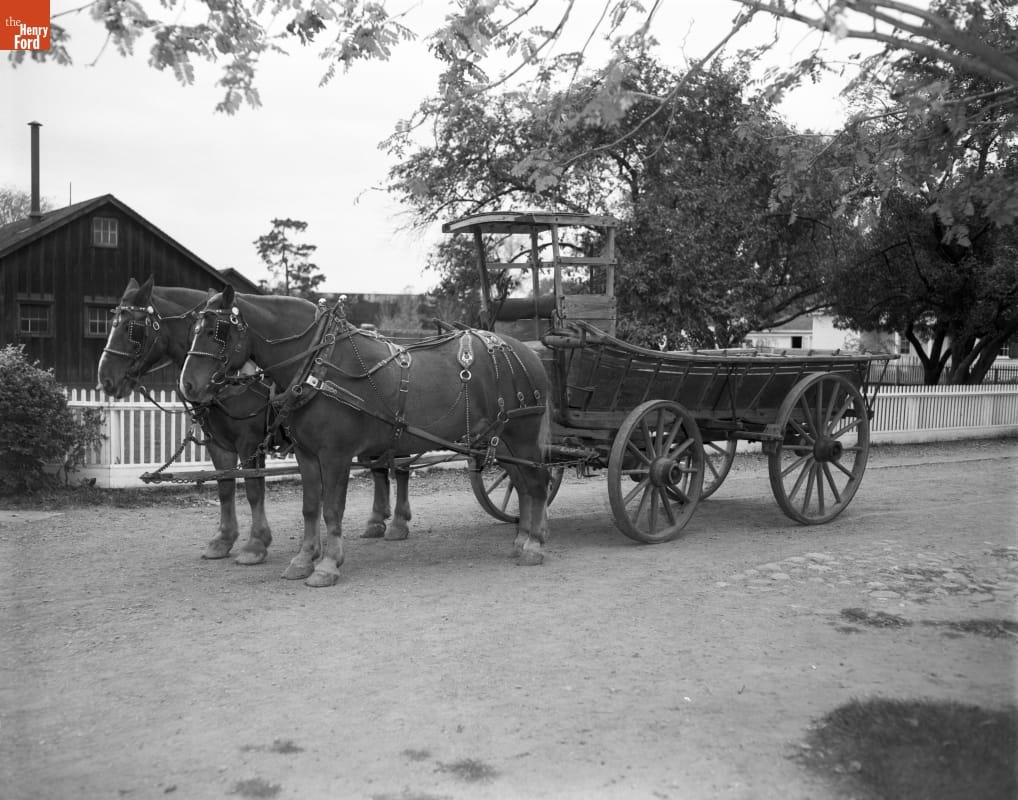 This wagon, used in Montgomery County, Pennsylvania, near Philadelphia, is an example of a special purpose wagon. It has flared sides to increase its load-carrying capacity and includes tall end racks, called “hay ladders,” to assist in tying down large loads of hay. In a horse-powered world, hay was an essential crop. While much hay was used on farms, huge quantities were also transported to cities on wagons like this and sold at central hay markets.

Buckboard Used by the Dr. George E. Woodbury Family, circa 1885 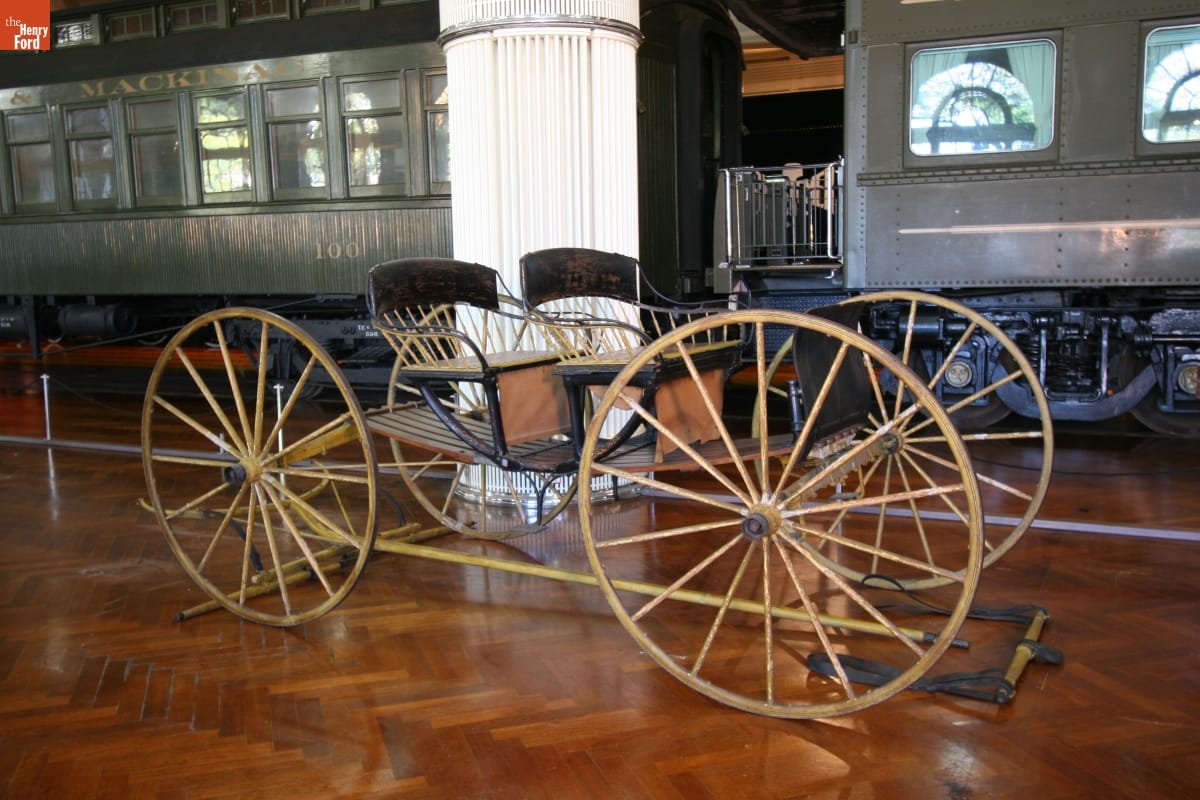 The buckboard is an American innovation. It is essentially a pair of axles connected by springy floorboards mounting a seat. The floorboards provide a springing action in place of a heavier, more complex spring system. Buckboards were developed in the first third of the 19th century and could carry both people and goods. This rather elaborate buckboard with a pair of seats was used by a Massachusetts physician, Dr. George E. Woodbury, and was drawn by two horses.

Mail Wagon Used for Rural Delivery in Missouri, circa 1902 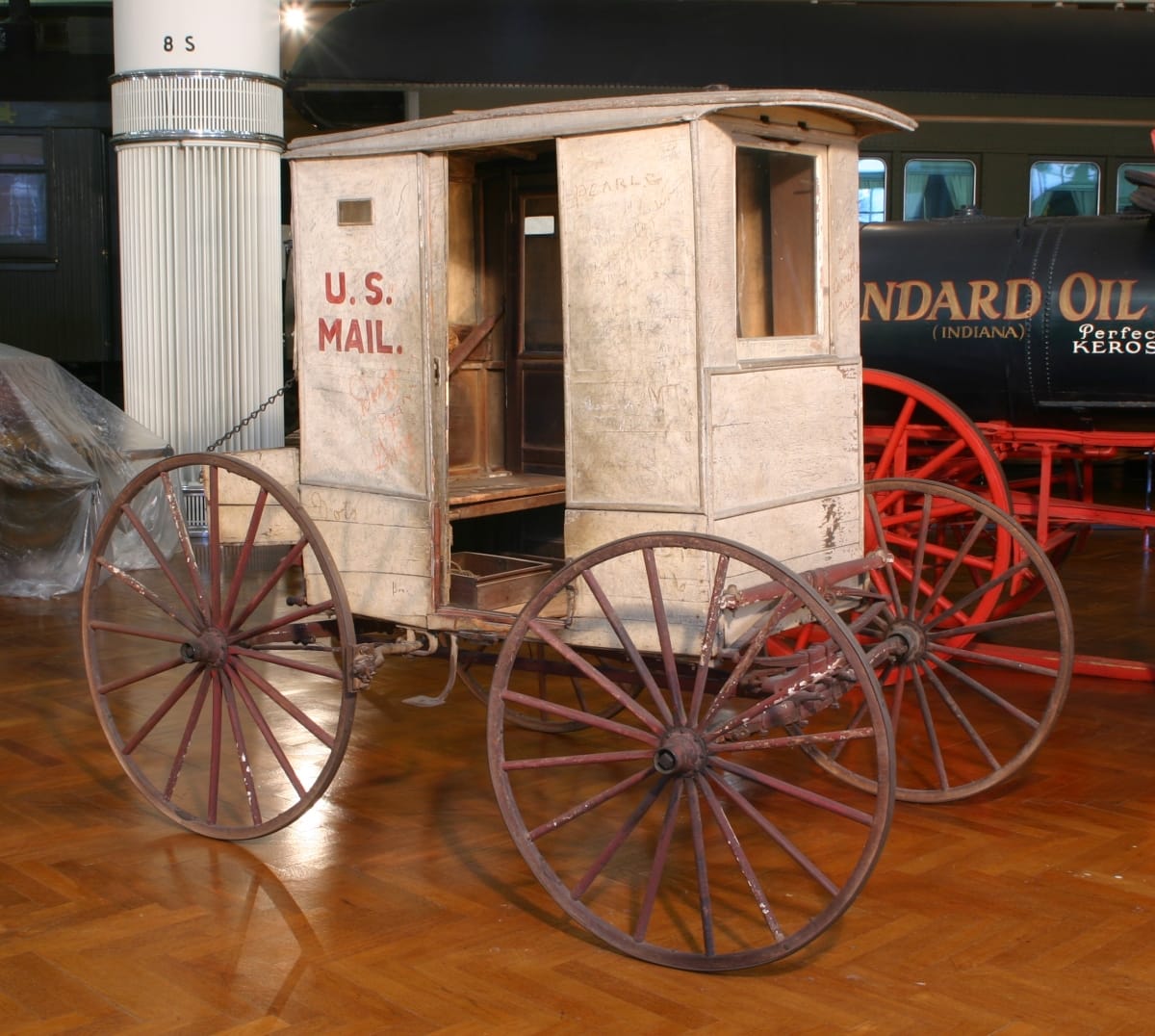 One of the major innovations that helped break down rural isolation was Rural Free Delivery (RFD), instituted by the Post Office Department in 1896. Prior to 1896, farmers had to pick up their mail at the post office. Rural mail carriers were required to provide their own vehicles, and many chose light mail wagons like this one. Its wood and canvas construction keeps its weight down, and it features pigeonholes for sorting mail. It is even outfitted with a coal-burning stove to keep the mail carrier warm in winter. This wagon was used by August Edinger to deliver mail in Kimmswick, Missouri, from 1902 to 1925. In 1925, he bought a Model T Ford and retired his horse-drawn wagon. 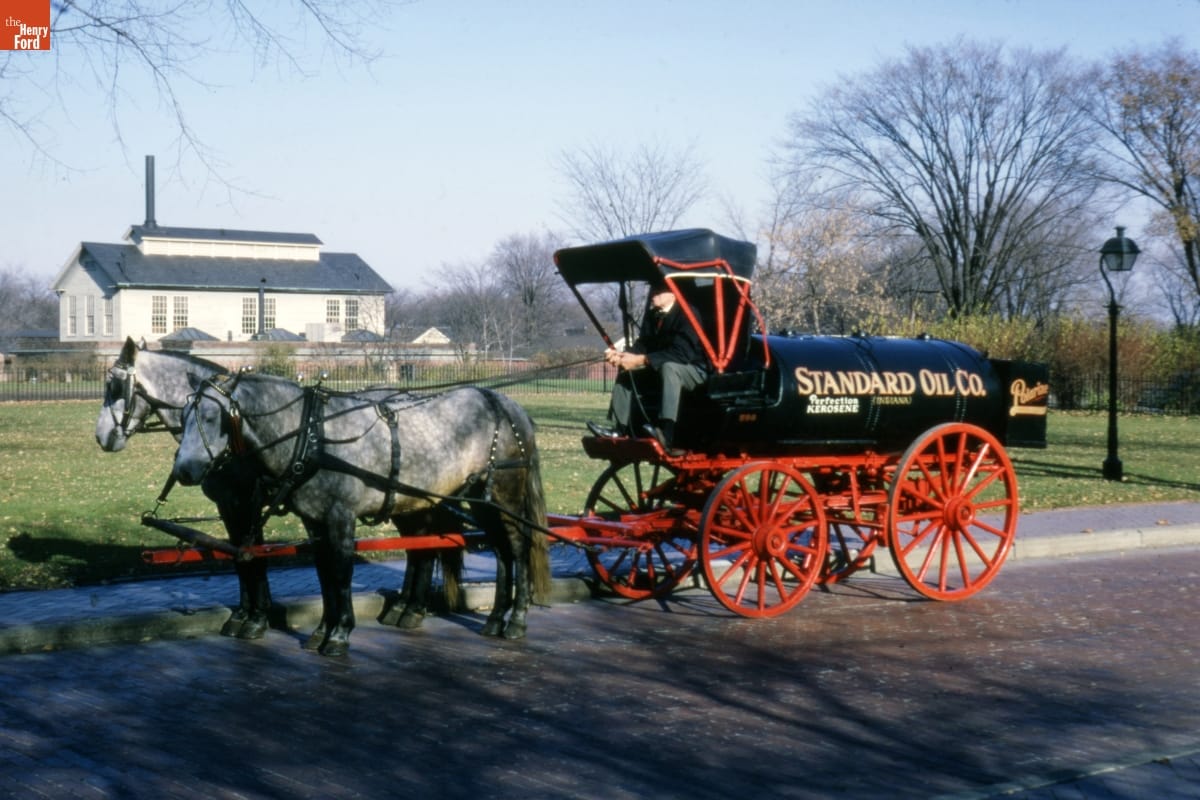 Standard Oil of Indiana used wagons like this one to distribute kerosene and lubricating oils throughout the Midwest. By 1902, some 6,000 such wagons plied the rural roads. This two-horse wagon served the region of Michigan between Chicago and Detroit. 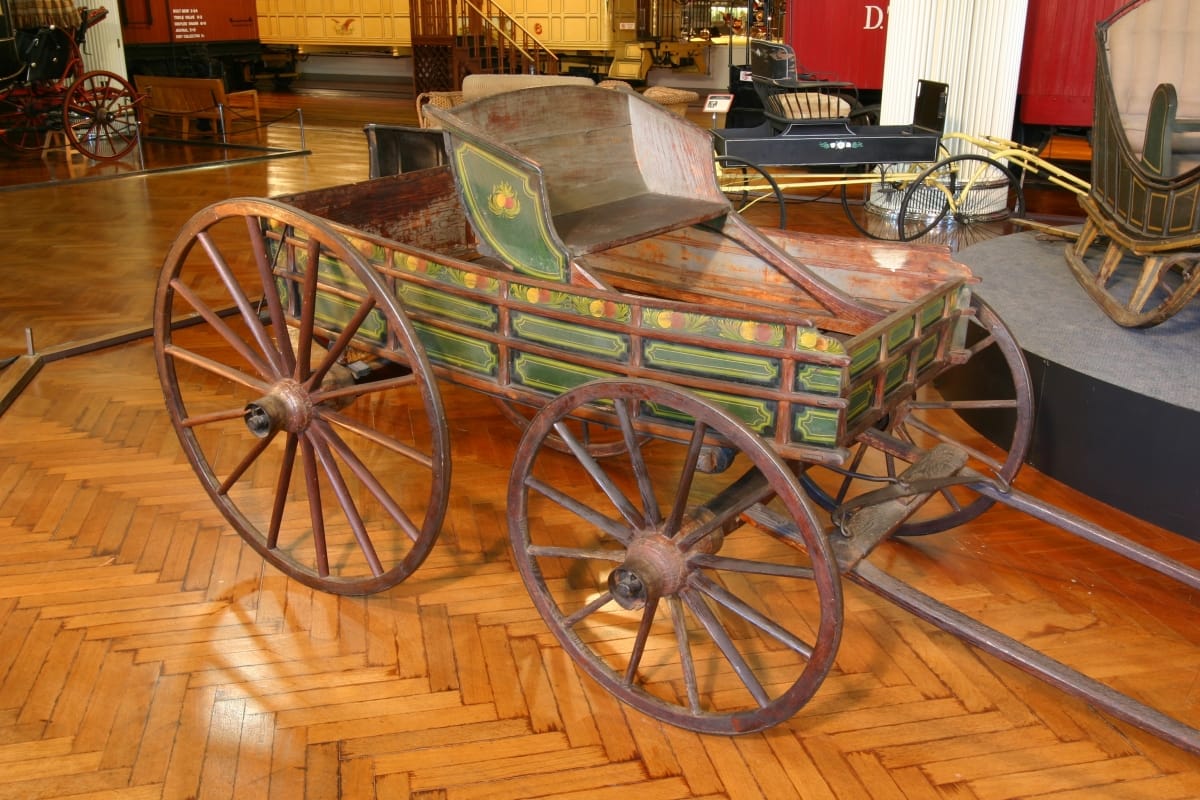 The pleasure wagon is an American innovation developed in the early 19th century. The idea was to create a light wagon suitable for carrying both people and goods. The seat is mounted on long pieces of wood that serve as springs; the seat can be removed to increase the carrying capacity. The wagon is suspended on leather thoroughbraces and is highly decorated with paint. It was drawn by a single horse. 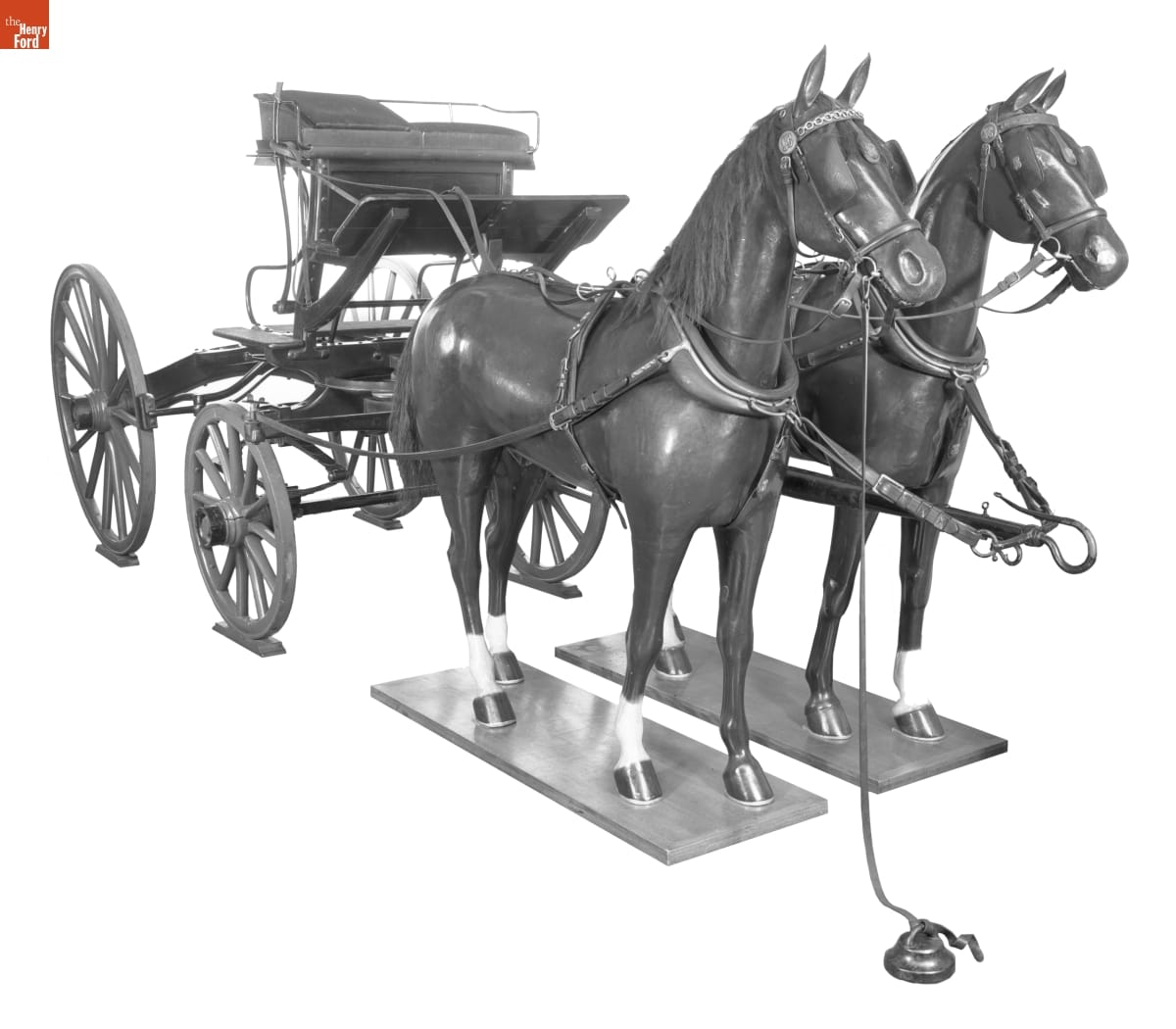 Horses had to be trained to pull vehicles and farm implements. A whole class of vehicles called breaks was created for this purpose. Individual farmers would likely not have breaks, but breeders would have them so they could break their animals to the harness before selling them.

This vehicle takes its name from its purpose—to break, train, and exercise pairs and teams of carriage horses. Heavily built, to give animals the feel of a heavy carriage, it can also stand the abuse that unruly horses might give it. An unbroken horse was usually matched with a steady, reliable horse during training. 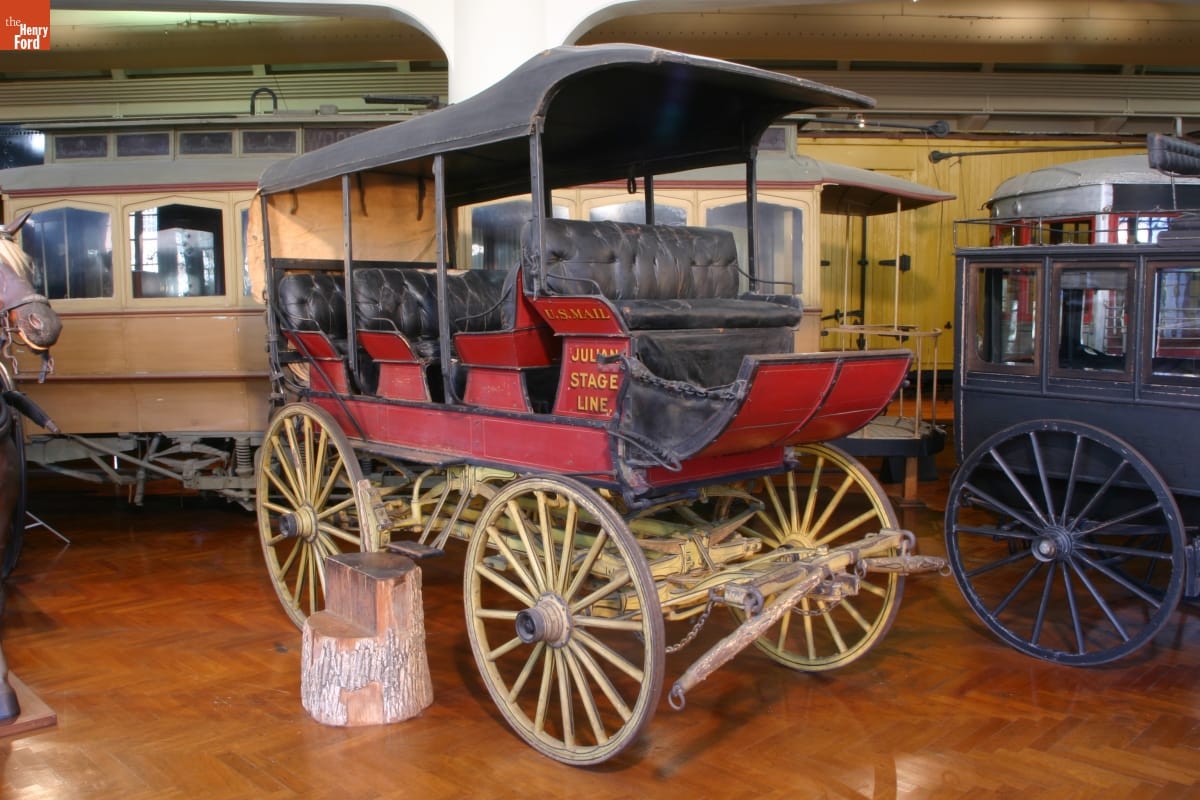 Lighter and less expensive than the more famous Concord coach, stage wagons served much the same purpose. They carried passengers and mail over designated rural routes on a regular schedule. This one ran between Julian, a California mining town, and Foster Station, where passengers caught a train for the 25-mile trip to San Diego. This wagon was pulled by two, possibly four, horses. 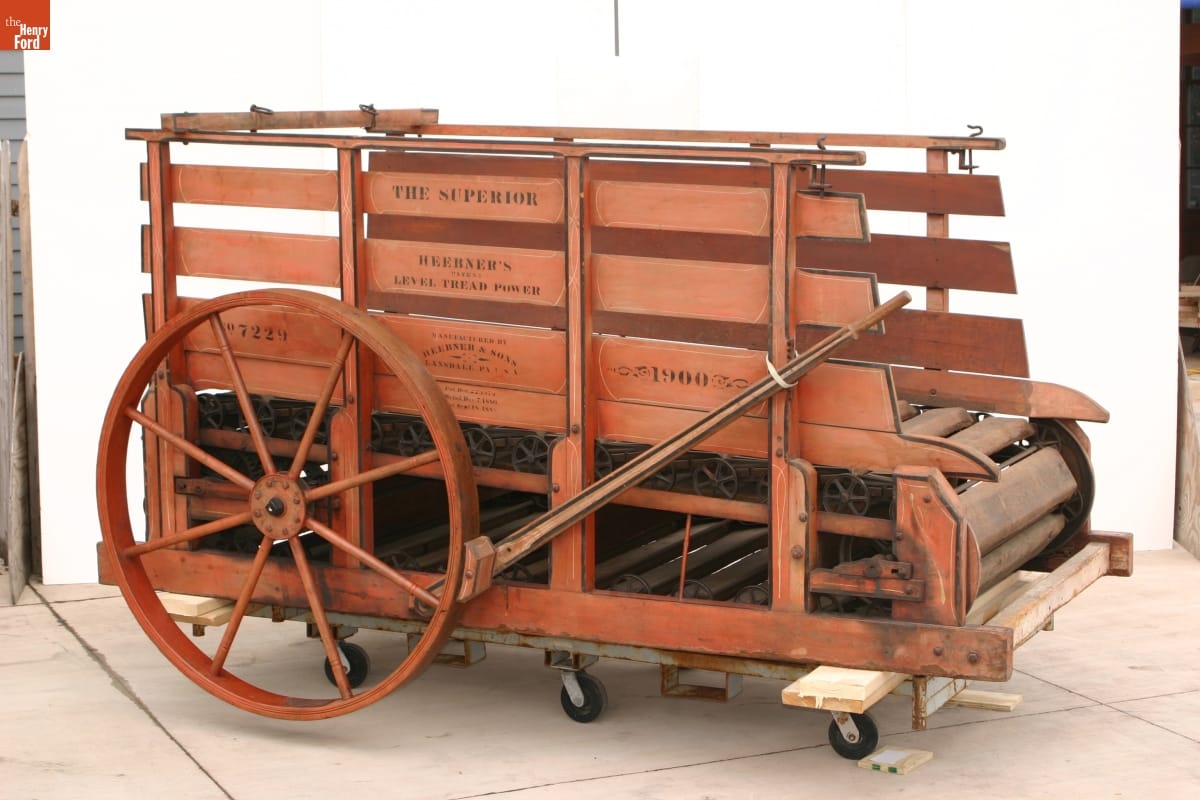 Not all horse power was used to pull vehicles. With the aid of treadmills, sweeps, and whims, horses could become portable motors for powering sugar cane mills, threshers, corn shellers, small grain elevators and so forth. This two-horse model of treadmill, on exhibit in the Soybean Lab Agricultural Gallery in Greenfield Village, is typical: The horses walked on an endless belt, turning wheels that could power machines. 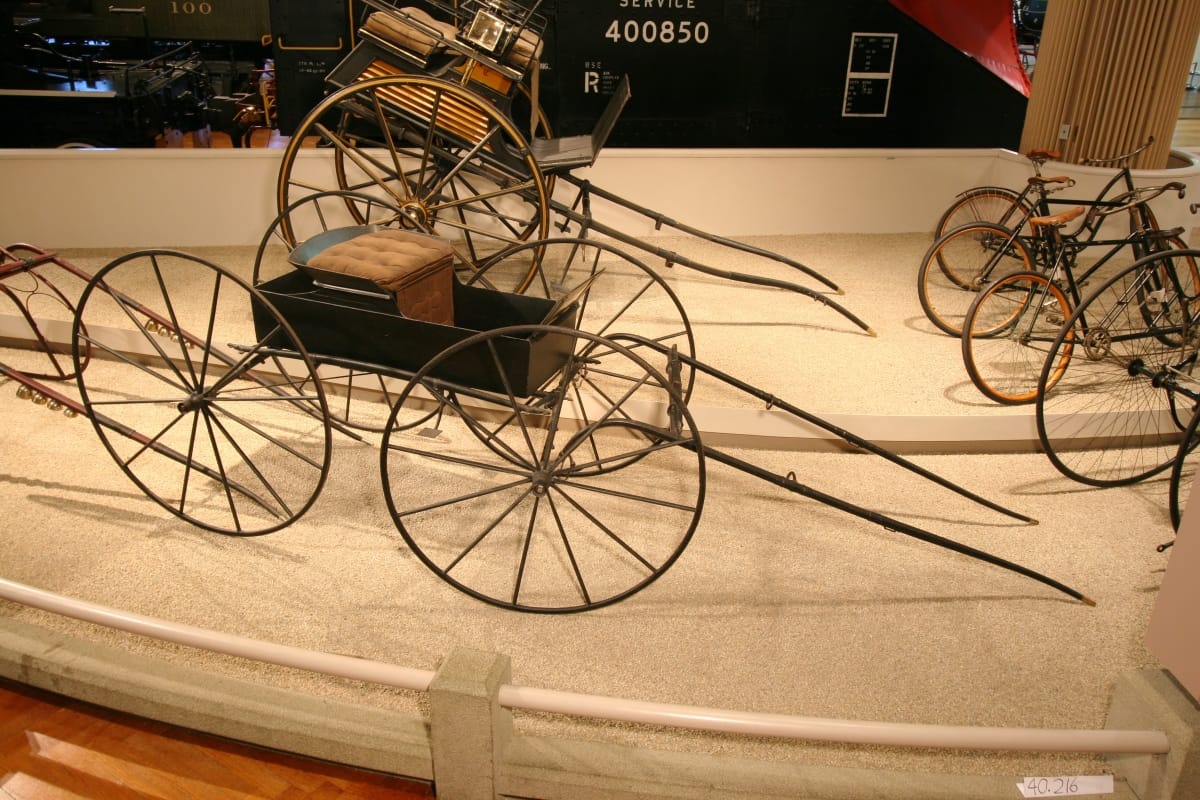 An example of the light, relatively cheap passenger vehicles that appeared in the last quarter of the 19th century, this runabout features James B. Brewster’s patented sidebar suspension and extremely light, steam-bent hickory wheels. It exemplifies the light construction that came to characterize American carriages, weighing just 96 pounds. It was pulled by a single horse.