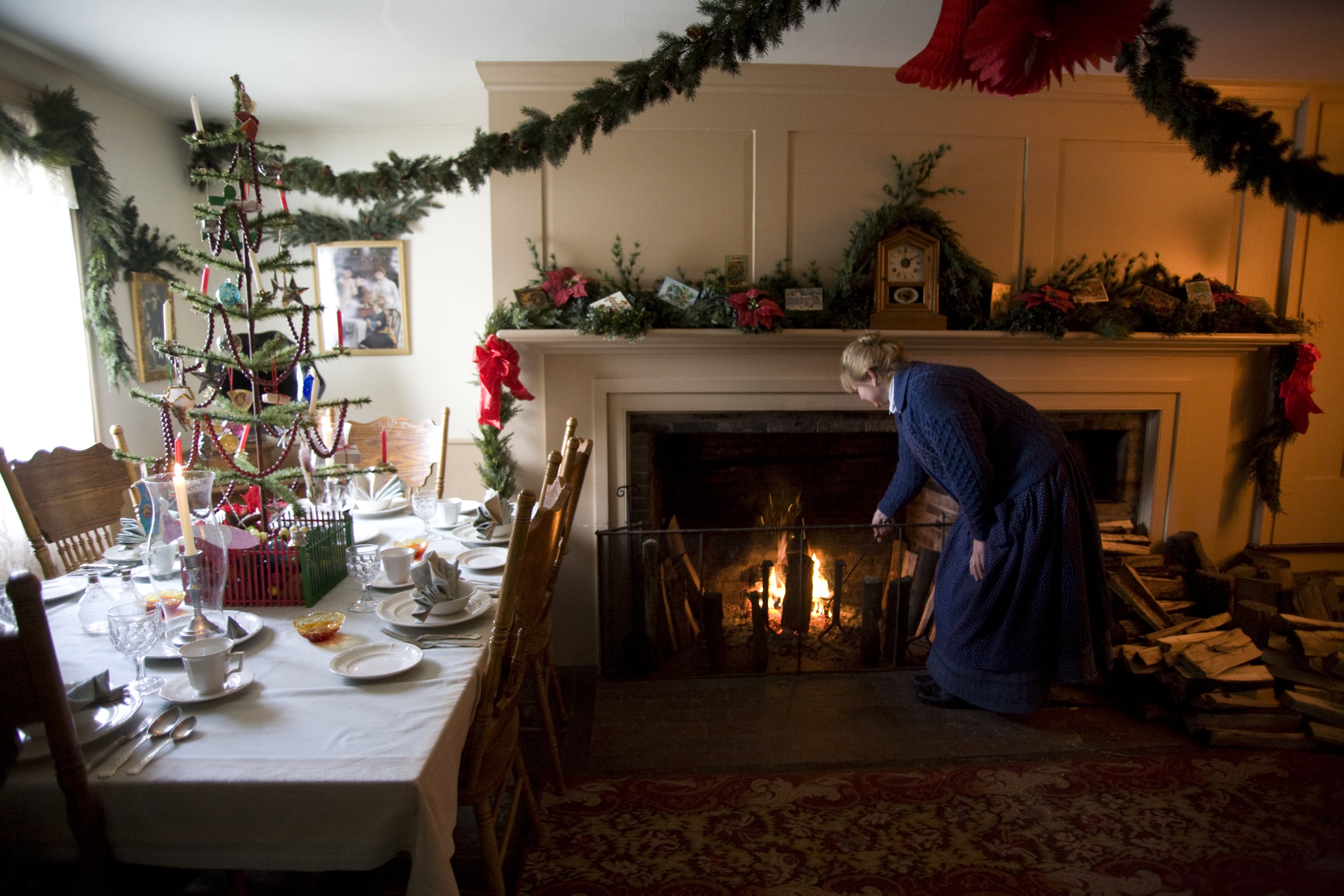 A Half Century in the Making, the Journey from Yuletides to Holiday Nights

What we know and love today as Holiday Nights did not spontaneously appear in 2000 when we first opened Greenfield Village on December evenings for an immersive holiday experience. Holiday Nights has evolved and grown based on many experiences and inspirations from decades of village “Christmases past.” and the work of many talented people.

The ability to transport our guests to a different time and place is most powerful after dark as the modern world that constantly pushes closer to our borders can be temporarily pushed away. When all is said and done, Greenfield Village provides the most perfect “set” in which to bring the past alive. With over 300 years of history represented, the possibilities are endless; a world where Charles Dickens’, A Christmas Carol, and It’s a Wonderful Life can seamlessly collide. A place where a small town from the distant past comes to life for several hours on December evenings, bringing forth the magic of the holiday season.

Holiday Nights in Greenfield Village is a classic example of “if you build it, they will come.” What began with conservative hopes for several hundred people in attendance has continually grown year after year. 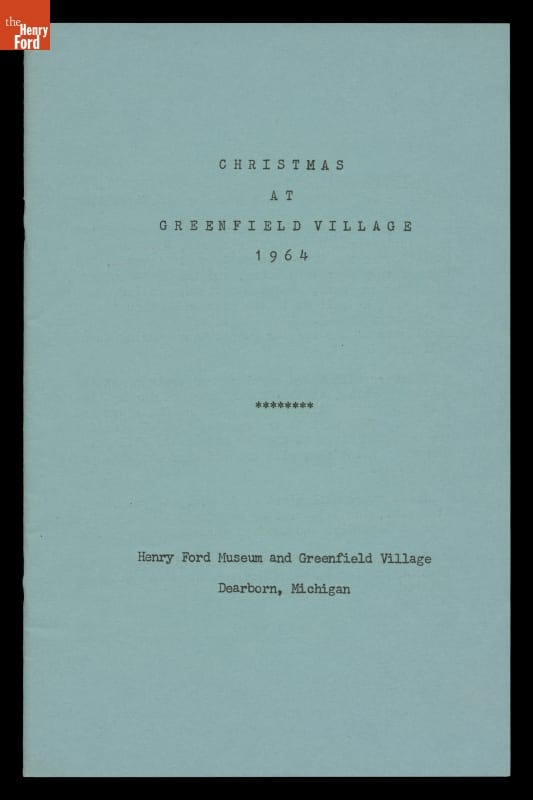 The holiday experience in Greenfield Village has a long history. As early as the mid-1960s, Village buildings were decorated both inside and out for the holiday season. Historic Christmas recipes were prepared in the village kitchens in fireplaces and wood burning stoves. Early on, all the guest experiences were limited to daytime and varied from guided tours, to full access, to tour on your own. Decorations were very elaborate, and included many collection items, but were not always based on sound historical research. Every building got a bit of Christmas, whether it would have been celebrated or not. During this period, attendance was vigorous, especially on December weekends. 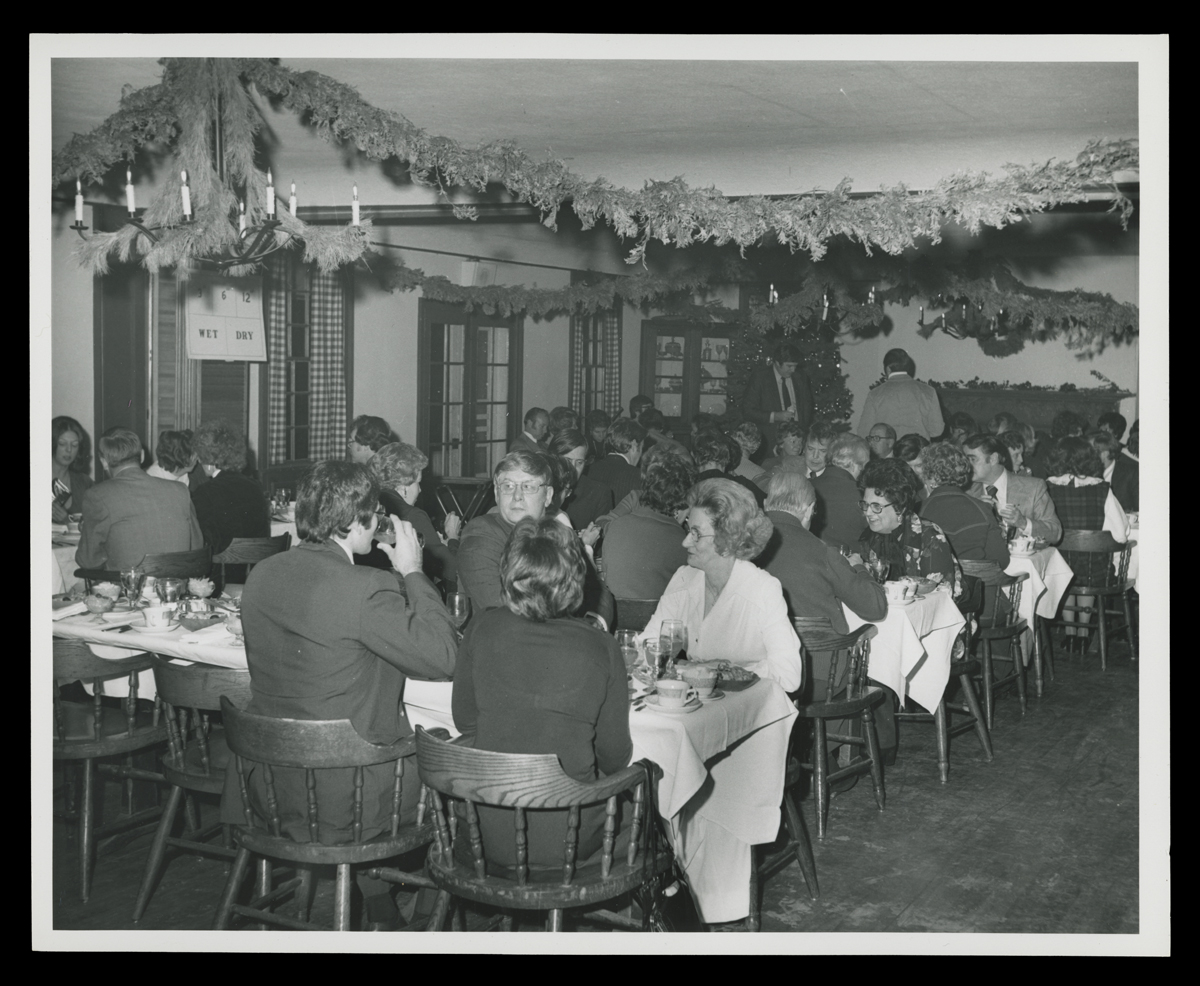 By the mid-1970s, new evening holiday experiences, called Yuletide Evenings, were introduced. Guests had the choice of a formal dinner in either the newly constructed Heritage Hall (now the Michigan Café) or the Clinton Inn (now the Eagle Tavern).The experience included horse drawn wagon, or if conditions allowed, sleigh rides into the Village, and depending on which package was purchased, a tour of 4 different decorated historic buildings, either before or after dinner. By the early 1980s, the Clinton Inn became Eagle Tavern, and the evening program changed to become an immersive 1850 dining experience much like the program offered today. Eventually, the Village tour portion of the evening was discontinued, offering a dinner only experience.

In the early 1990s, a concerted effort had been made for some years to reinvigorate the daytime program. By paying attention to historical accuracy, but at the same time, broadening the scope and allowing for a wider interpretation of how Americans began to celebrate Christmas in the 19th century, more engaging programs were offered.  Hundreds of artifacts were chosen to fit out the dining rooms, parlors, and where appropriate, Christmas trees. Additional research was also done to lift-up the historic cooking programs and infuse a “living history” approach to the historic structures with the addition of period clothing. All this further supported the stories of the diversity of the American Christmas celebration. This work laid the foundation for the core content of Holiday Nights that we rely on today.

By the late 1990s, for a variety of reasons, the daytime visitation  to the Greenfield Village Holiday Program had begun to decline while the evening program attendance remained strong. Based on the inspiration and fond memories of the wonderful candle and lantern lit buildings decorated for the holidays, a new program was proposed to re-create that opportunity through the Educational Programs class offerings. Though on a very small scale that served less than 100 people, this program reminded us of what could be possible and got the creative process rolling. 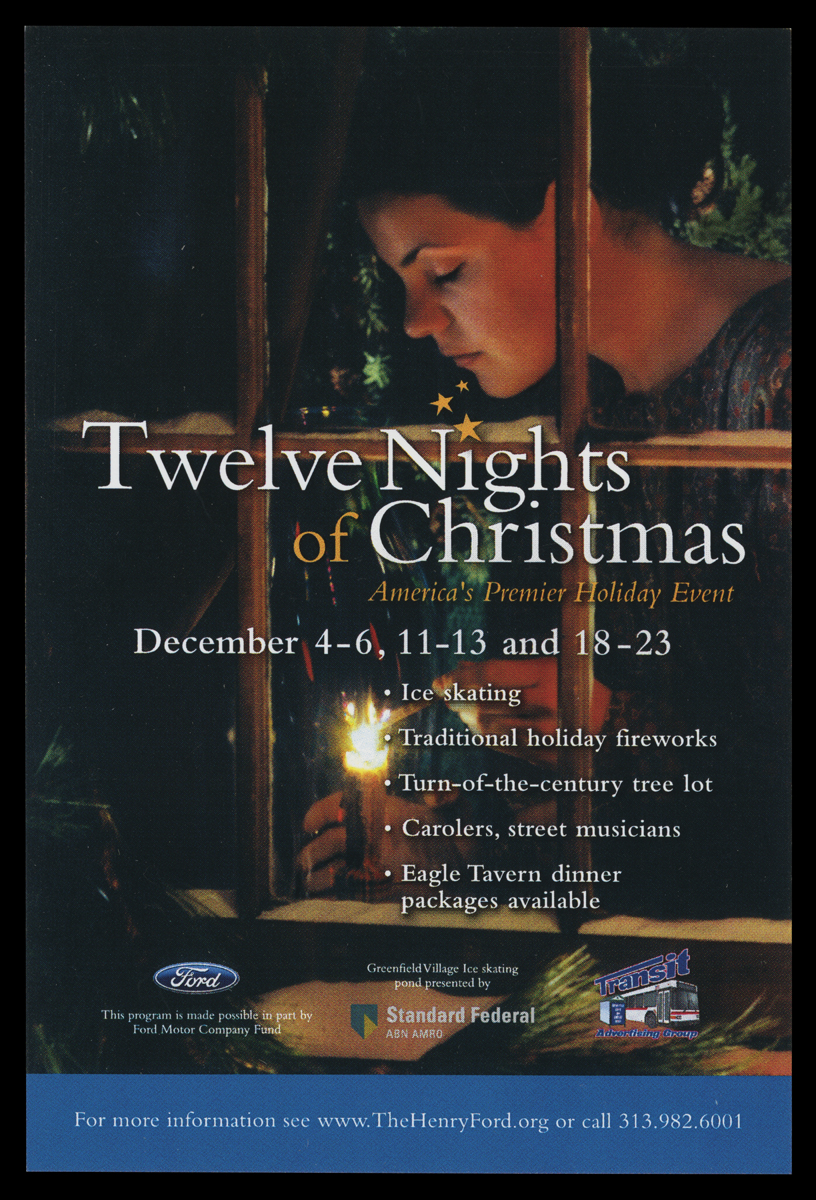 The Twelve Nights of Christmas, what would later be called Holiday Nights, debuted for the Christmas season of 2000. The daytime “Holiday” program remained in place, and the evening program was basically an evening version. This early version was very quiet, and very dark, as none of the village restoration had taken place yet. Most of the activities were based inside the buildings. Despite the slow start, the potential was fully realized, and creative and physical growth began. With the village closed for the holiday season of 2002  for the renovation, there was time to regroup, brainstorm, and make plans. The new and improved version for the “new” village in 2003 saw expanded outdoor activities, more music, and an ice rink that featured an artificial ice surface. Even with enhanced programming elements, the program was still not really filling the space as it could. 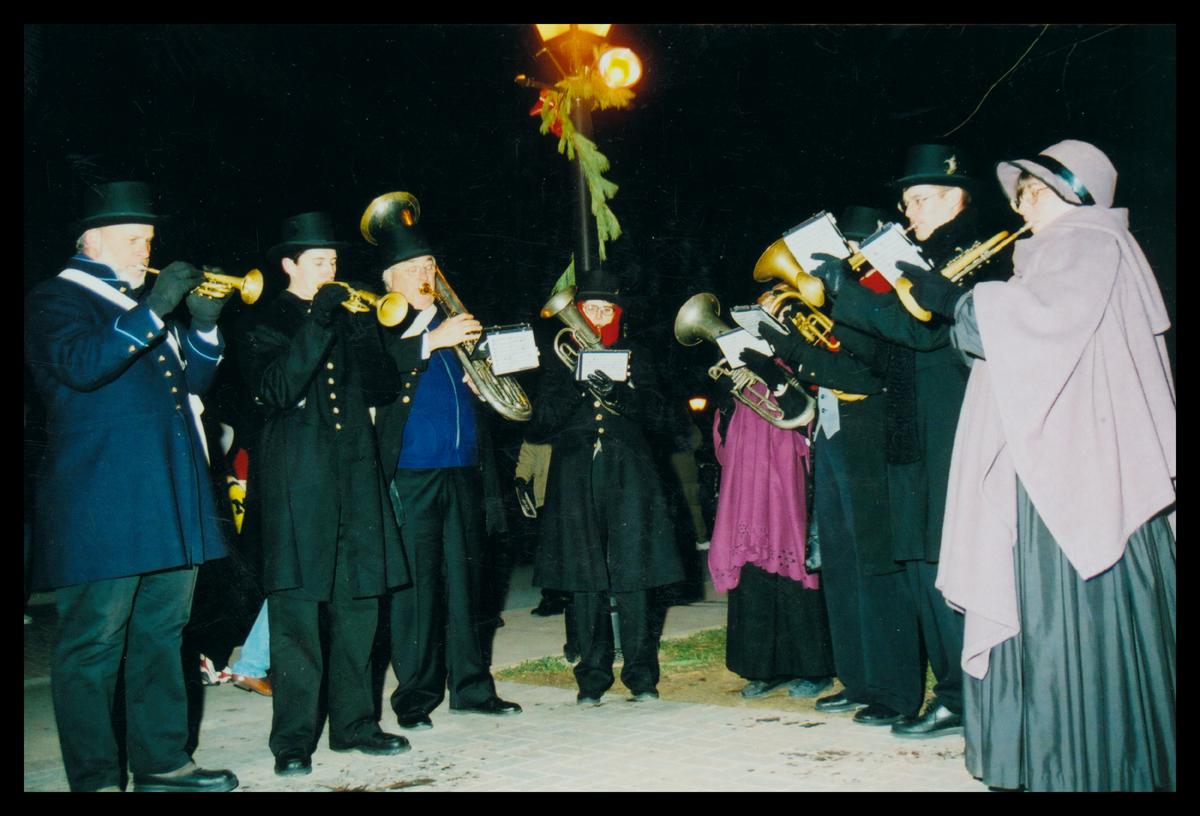 During these early years, it was apparent to the village programs team that to achieve the level of experience we were aspiring to, the event would need to be broken down into production areas, and each would need its own level of care and attention to detail. Decorating the village, designing and deploying the lighting, planning the historic food demonstrations, food sales and retail, staffing and training, musical and dramatic program casting and rehearsing, dressing an army of staff, firewood, lanterns, and communicating the entire thing, all was captured and pulled together with the Holiday Nights manual. This work became the go-to document for what needed to be done when and where, once preparation for the evening program began. This tool also became invaluable in planning and producing subsequent years of the program. So, as ideas came forth as to how to expand and improve the Holiday Nights guest experience, the program manual format made it possible to incorporate the new elements and move the experience forward.

A very memorable off site staff mini-retreat to a local book store cafe in 2004 laid the foundation for the program we know today. Building on the sound historical content of our village holiday celebration, our success with Holiday Nights thus far, along with a commitment from the institution, we created and refined the combination of guest experiences that today, makes Holiday Nights truly one of the nation’s greatest holiday experiences. The fireworks finale, the end of the evening procession and sing-a-long, a visit from Santa, a real ice skating rink, immersive food and drink stalls in the center of the Village, a greens market, storytellers, over 100 staff in period dress as well as a wide variety of additional dining experiences and top quality live music, has put Holiday Nights on the map over 20 seasons.

The program continues to grow and evolve. For my part, it’s been a privilege and source of pride to see how far we have come and how we have come together to achieve such greatness. I look forward to the road ahead and what the next 20 years may bring.

Inspired by the evolution of Holiday Nights? See it for yourself - limited tickets for 2019 remain.

Jim Johnson is Curator of Historic Structures and Landscapes at The Henry Ford and Director of Greenfield Village.