Celebrating Ninety Years of Inspiration: Collecting Through the Decades 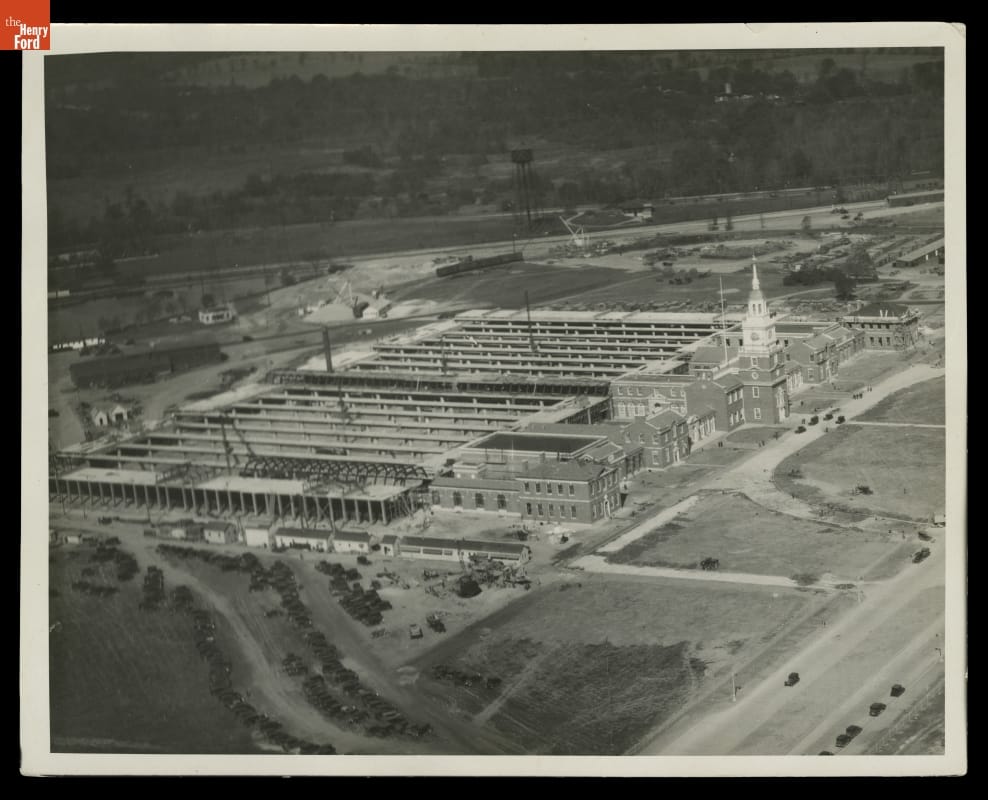 Henry Ford dedicated his museum and village on October 21, 1929, marking the 50th anniversary of Thomas Edison’s first successful light bulb test. Ford named his new complex The Edison Institute of Technology to honor his friend and lifelong hero. This year, Henry Ford’s museum and village complex – now known as The Henry Ford – celebrates its 90th anniversary. Throughout 2019, we’ll be reflecting decade-by-decade on significant additions to the collection he began, with a focus on our institution's evolving collecting philosophies.

Our Origins
Although Henry Ford became one of the world’s wealthiest and most powerful industrialists, he never forgot the values of the rural life he had left behind growing up on a farm. His interest in collecting began in 1914, as he searched for McGuffey Readers to verify a long-remembered verse from one of his old grade school recitations. Soon, the clocks and watches he had loved tinkering with and repairing since childhood grew into a collection of their own. Before long, he was accumulating the objects of ordinary people, items connected with his heroes and from his own past, and examples of industrial progress.

Contrary to the notorious quote, Henry Ford never really believed that history is bunk. What he believed was bunk was the kind of history taught in schools—that emphasized kings and generals and omitted the lives of ordinary folks. In 1916, Ford began to imagine building a museum that would show people a kind of history he believed was worth preserving.

Restorations
In 1919, Henry Ford learned that his birthplace was at risk because of a road improvement project. He took charge—moving the farmhouse and restoring it to the way he remembered it from the time of his mother’s death in 1876, when he was 13. He and his assistants combed the countryside for items that he remembered and insisted on tracking down.

He followed this up by restoring his old one-room school, Scotch Settlement School; the 1686 Wayside Inn in South Sudbury, Massachusetts (with a plan to develop a “working” colonial village); and the 1836 Botsford Inn in Farmington, Michigan, a stagecoach inn where he and his wife Clara had once attended old-fashioned dances. These restorations gave Ford many opportunities to add to his rapidly growing collections while honing his ideas for his own historic village. 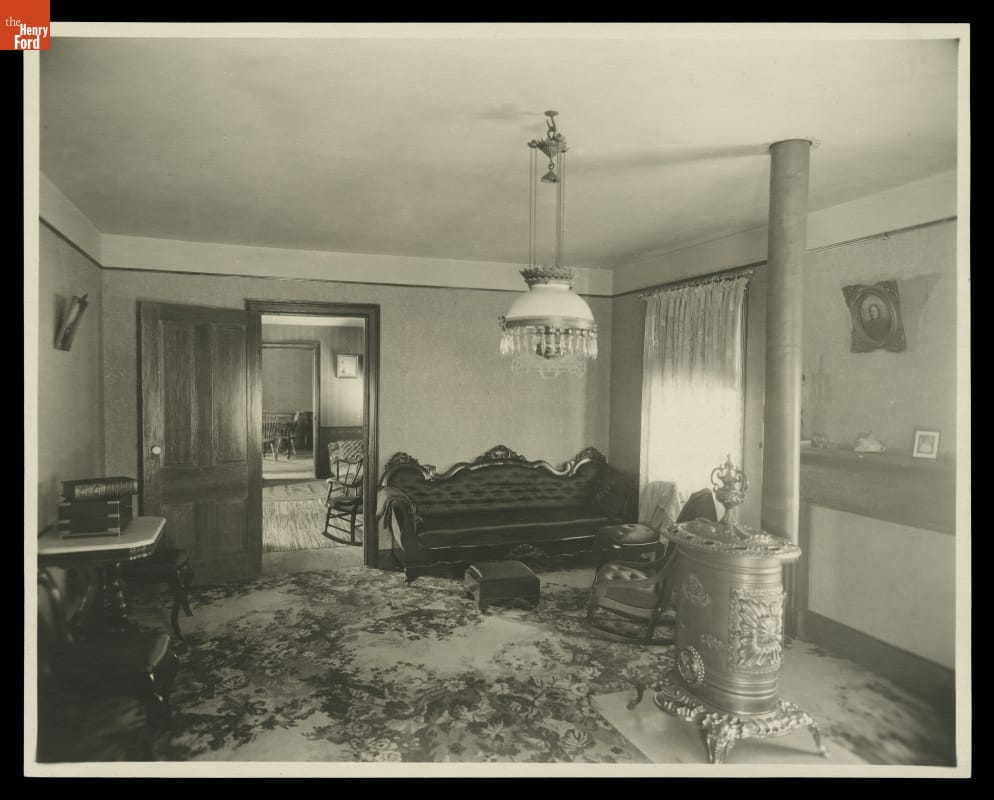 Something of Everything
In the early 1920s, Henry Ford moved his growing hoard of antiques into a vacated tractor assembly building. The objects fit every description. Large items hung from rafters; smaller ones sat on makeshift benches and racks. Watches and clocks hung along the wall. Henry and his wife Clara enjoyed sharing their relics with others. Once people learned Ford was collecting objects for a museum, they flooded his office with letters offering to give or sell him antiques. 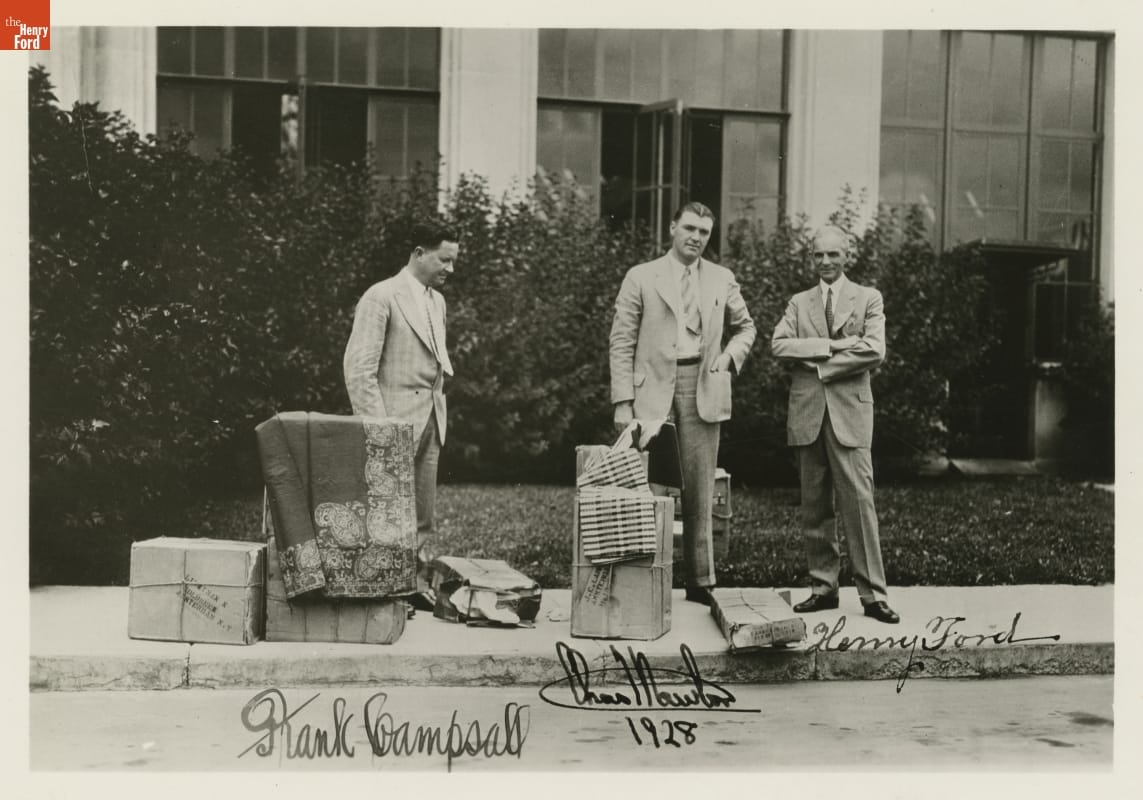 Ford also sent out assistants to help him find and acquire the kinds of objects he felt were important to preserve. Goods intended for the museum arrived in Dearborn almost daily—sometimes by the train-car full. By the late 1920s, Henry Ford had become the primary collector of Americana in the world. 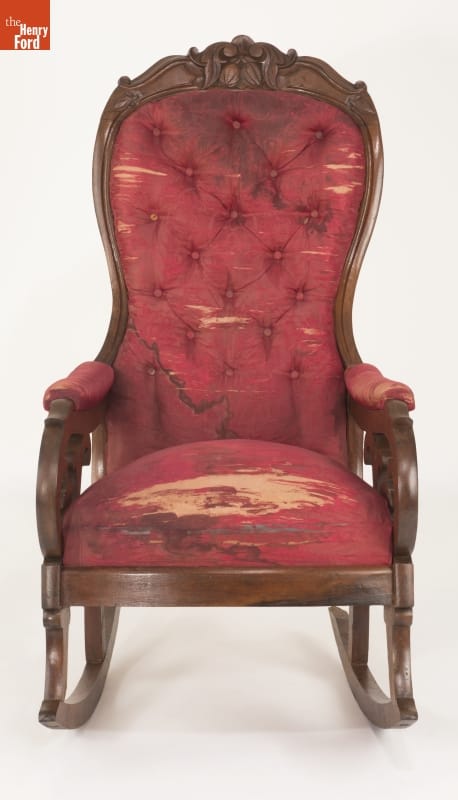 Rocking Chair Used by Abraham Lincoln at Ford's Theatre the Night of His Assassination, April 14, 1865. THF159537

One of the most well-known artifacts in Henry Ford Museum of American Innovation is the rocking chair used by Abraham Lincoln at Ford's Theatre the night of his assassination, April 14, 1865. Originally purchased as part of a parlor suite, the rocking chair was intended for use in a reception room in Ford's Theatre, which opened in 1863. The parlor suite was purchased by Harry Clay Ford (no relation to Henry Ford), manager of the Theatre. However, the comfortable rocking chair began to be used by ushers during their "down" time and the fabric became soiled by their hair oil. This stain is still visible on the back. Sometime in 1864, Harry Ford had the chair moved to his apartment across the alley from the Theatre in a belated attempt to keep it clean.

Beginning with the Theatre's opening in 1863, President Lincoln became a frequent visitor. At some point, Mr. Ford began to supply the president and his party with comfortable seating furniture. Apparently, the president preferred this rocking chair, perhaps, due to his height. On the afternoon of April 14th, the chair was brought to the president's box along with a matching sofa and side chair. After the assassination, the Theatre and its contents was seized by the federal government.

After its seizure, the chair remained in the private office of the Secretary of War, Edwin Stanton. In 1867, the chair was transferred to the Department of the Interior and then sent to the Smithsonian Institution and placed in storage. For all practical purposes, the chair vanished from the public for half a century. Documentation at the Smithsonian indicates that it was catalogued into the collection in 1902. In 1929, the rocker was returned to Blanche Chapman Ford, widow of Harry Clay Ford.

Mrs. Ford sold the chair at auction through the Anderson Galleries in New York on December 17, 1929. The purchaser was Israel Sack, the dean of antique American furniture dealers, and an agent of Henry Ford. Sack had observed that Ford delighted in furniture that had association with American historical figures. Sack, in turn, offered the chair to Mr. Ford, who purchased it and carefully documented its arrival in Greenfield Village in early 1930. There, the chair resided in the Logan County, Illinois Court House where Lincoln practiced law as a circuit rider in the 1840s. Mr. Ford had moved the Court House to Greenfield Village in 1929--the chair became the centerpiece of his Lincoln collection. In 1979, as part of the institution's 50th anniversary, the chair moved from the Court House to the Museum, where it remains today.

Beyond the Lincoln Chair, our collections experts have selected a number of other items acquired before and during the 1920s that reflect our early collecting philosophy. 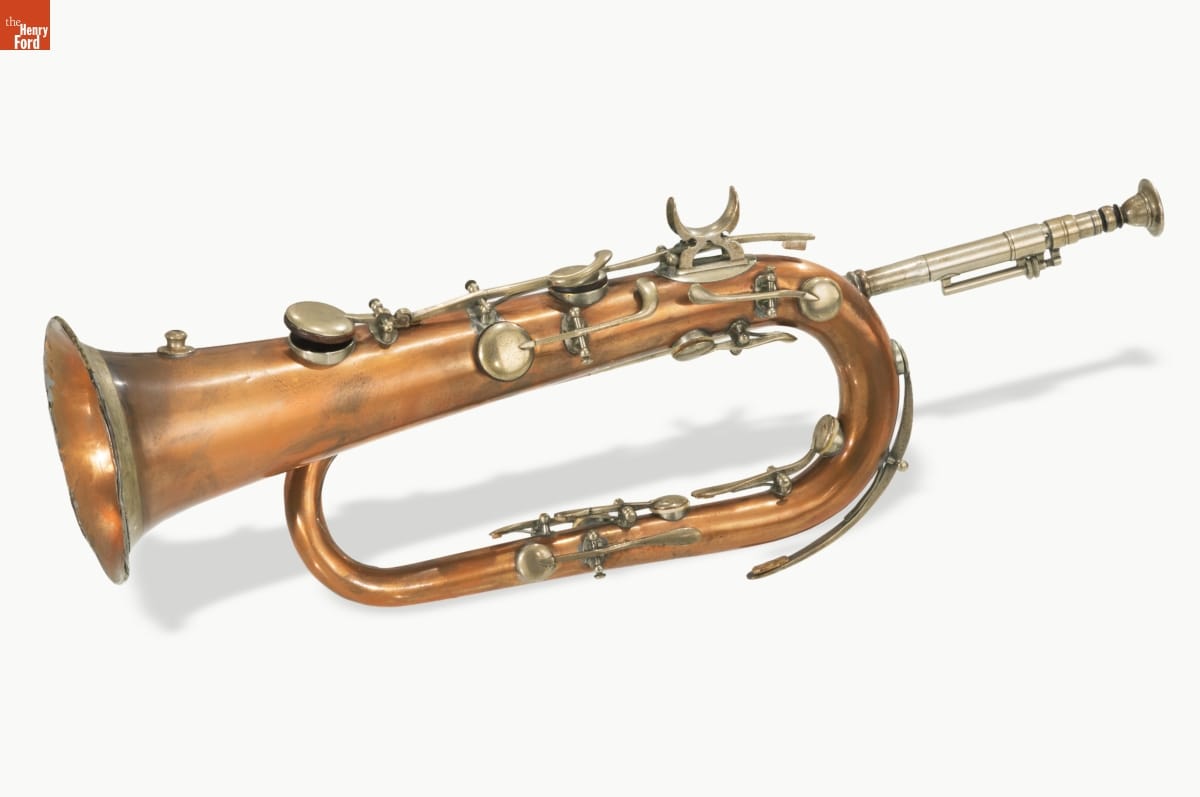 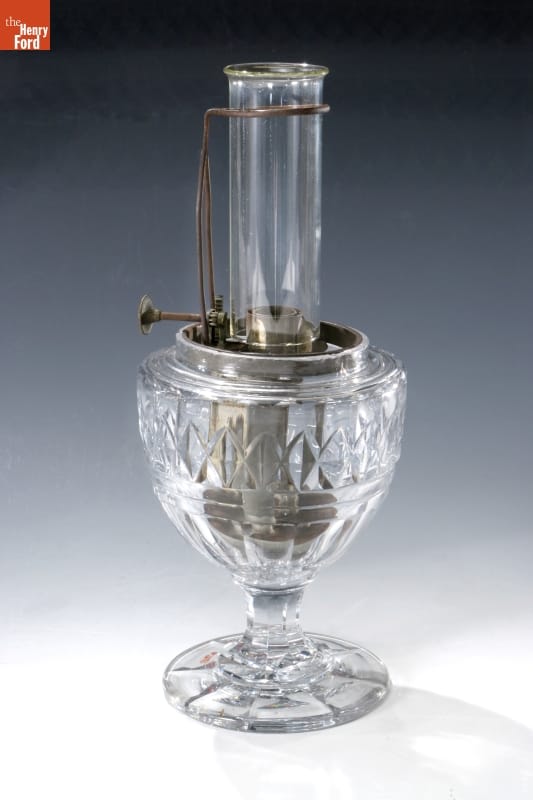 Argand Lamp, 1790-1850
This lamp expresses the collecting philosophy that Henry Ford and his staff were using in developing the lighting collection.  They were seeking to acquire examples documenting the changes in lighting technology that led to the introduction of the electric light bulb in 1879.  This Argand lamp was one the first oil lamps that created a flame burning brighter than a single candle. - Charles Sable, Curator of Decorative Arts 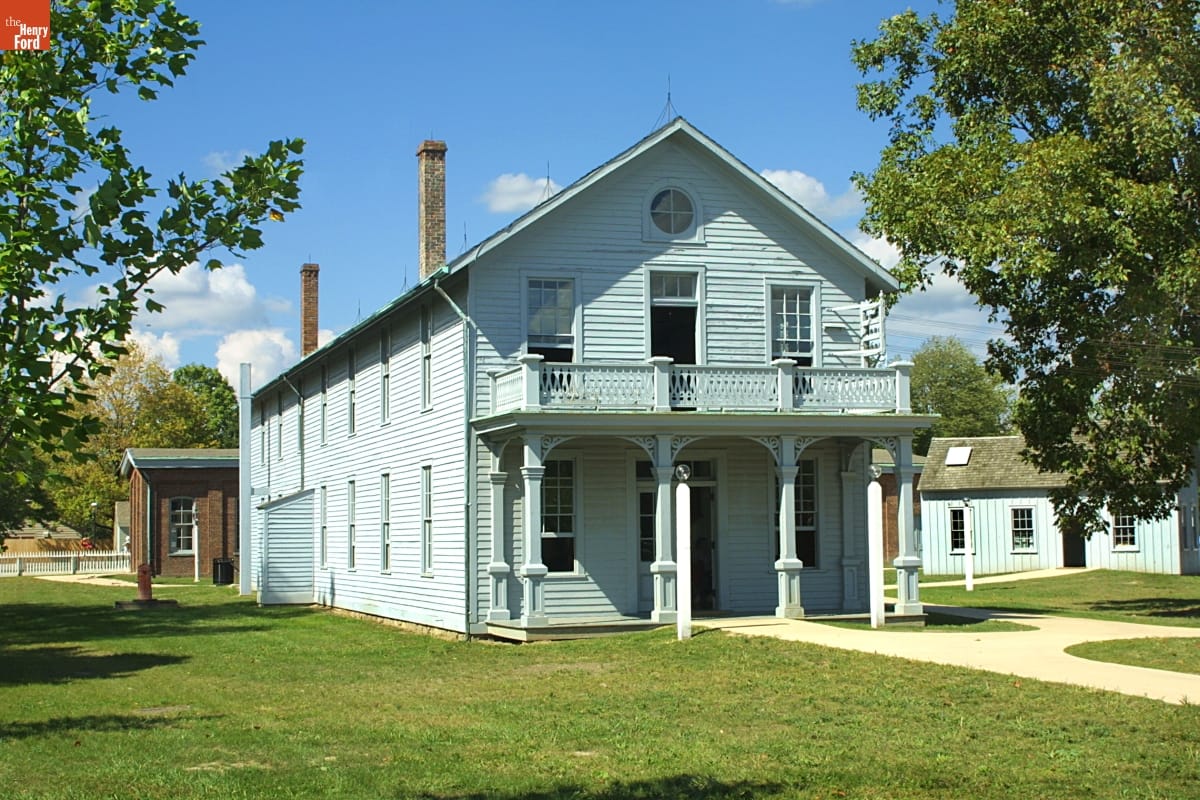 Menlo Park Laboratory
Among the most iconic and significant buildings in Greenfield Village, the re-creation of the Menlo Park Compound was a very important achievement for Henry Ford.  Work began to salvage what was left of Menlo Park in the late 1920s. By early 1929, original bits of the Main Lab, the Carbon Shed, and the Glass House came together with the re-created Library, and Machine Shop to bring Menlo Park to life. On October 21, 1929, the entire project received Thomas Edison’s stamp of approval, with the exception of it being too clean. - Jim Johnson, Director, Greenfield Village and Curator, Historic Structures & Landscapes 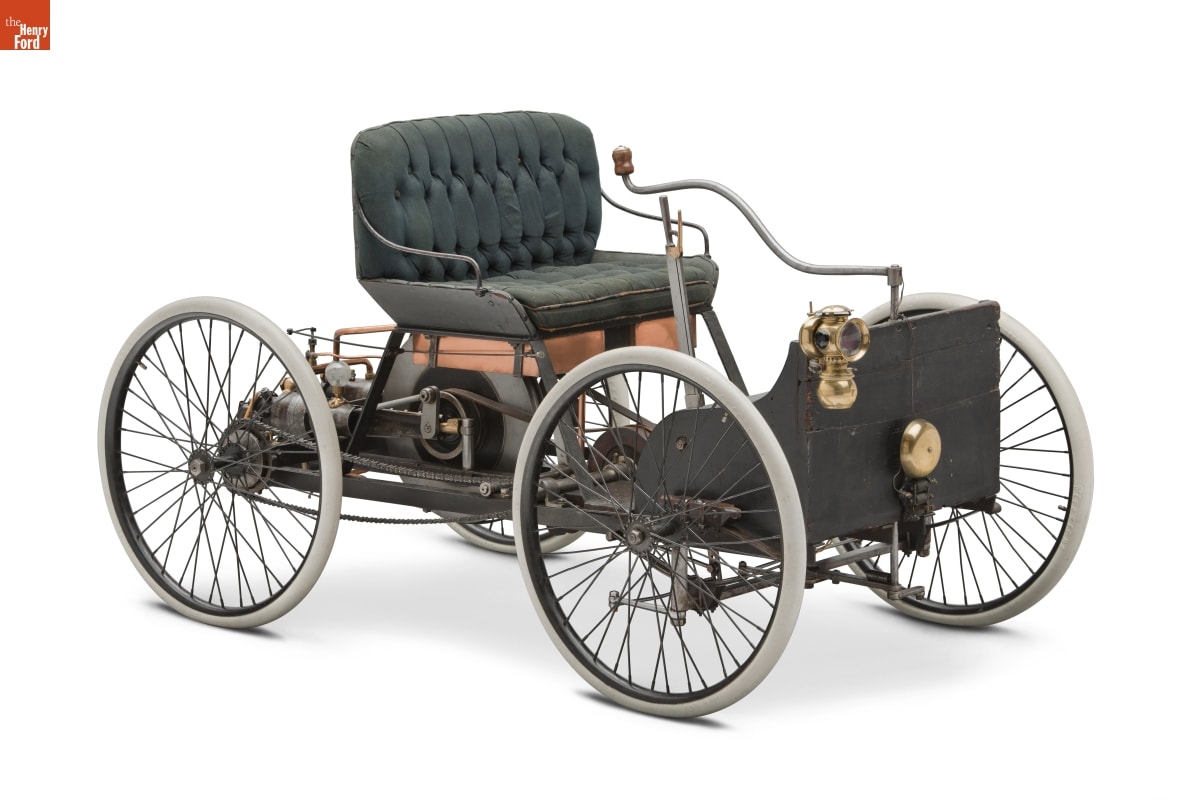 1896 Ford Quadricycle
It all began with the Quadricycle. Ford Motor Company, the Model T, The Henry Ford -- none of it would have happened if Henry Ford hadn't finished this little car in June 1896. He sold it a few months later for $200 -- money he promptly spent building his second car. Fast forward to 1904. With Ford Motor Company blooming and Henry perhaps feeling nostalgic, he paid $65 to buy the Quadricycle back. It was arguably Mr. Ford's first significant acquisition documenting his own life and achievements. - Matt Anderson, Curator of Transportation 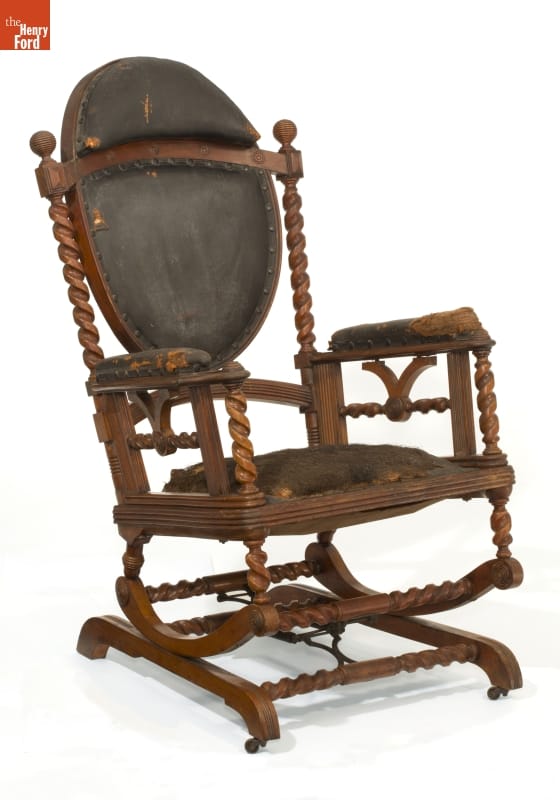 Platform Rocker, 1882-1900
In 1928, Henry Ford became interested in the estate of the late Josephine Moore Caspari of Detroit. A wealthy heiress, she married a Spanish riding master but divorced him just four years later after discovering that he had married another in Germany. The divorce was the talk of the town. Ms. Caspari became a recluse; bolting the doors to her large Italianate mansion and positioning two large dogs to guard the entry. When she passed away, her estate was set to be sold. Intrigued, Henry Ford bought many items from the estate, including this platform rocker made by George Hunzinger. Hunzinger’s platform spring rocking chairs combined numerous inventions, creating a more comfortable and quiet rocking experience. - Katherine White, Associate Curator, Digital Content 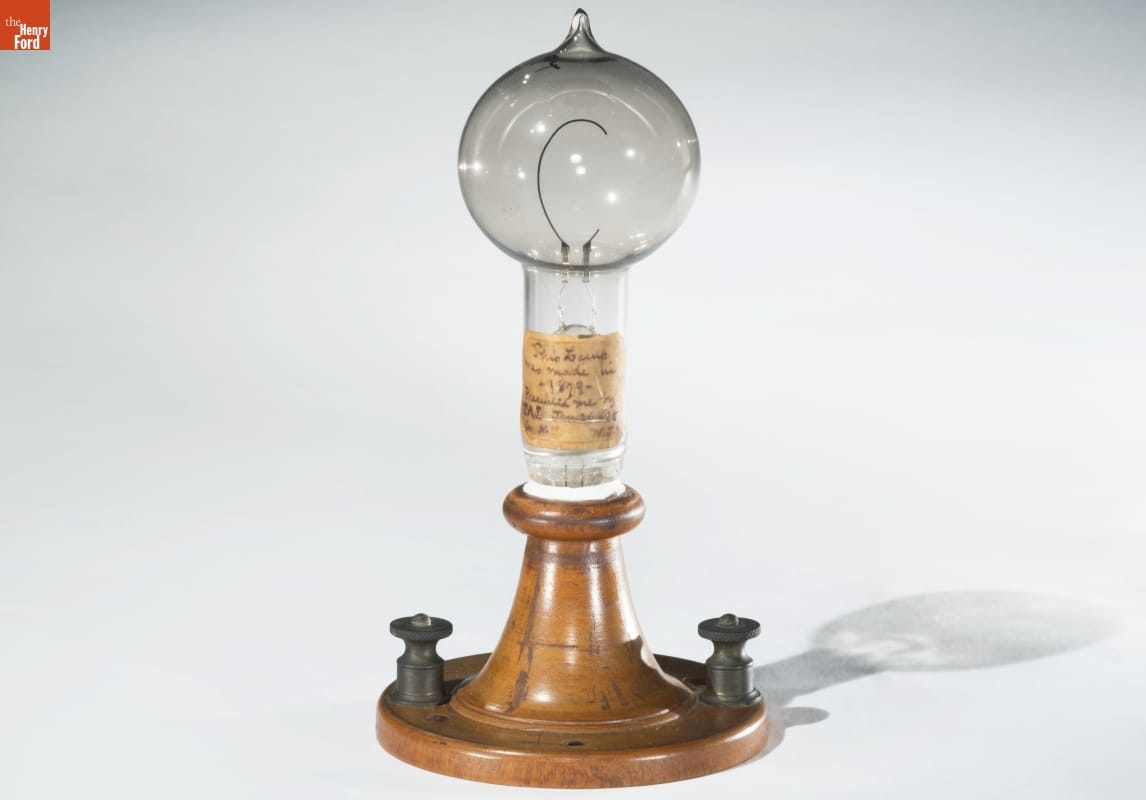 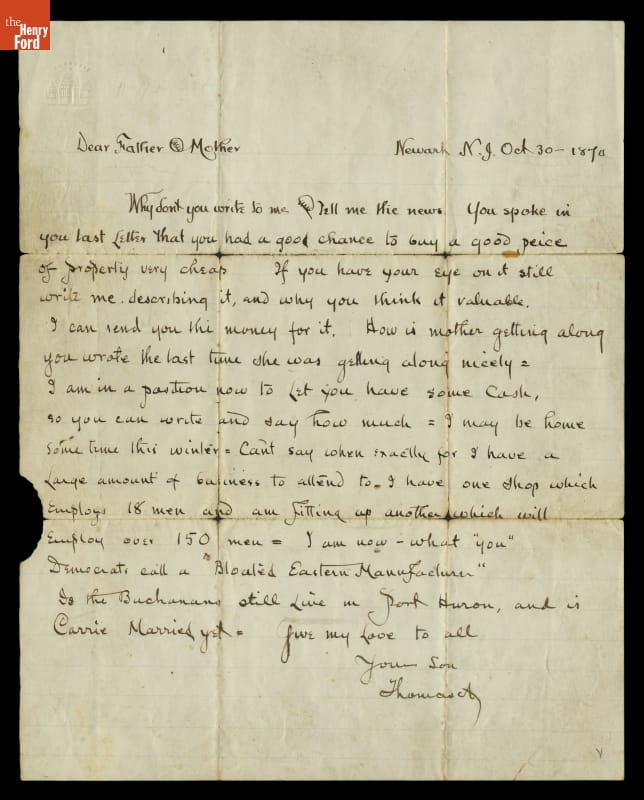 Letter from Thomas Edison to His Parents, October 30, 1870
This brief letter from a 23-year-old Thomas Edison to his parents provides insight into the early growth of Edison’s work on telegraph instruments. As part of a much larger collection acquired in 1929 through a gift from the Edison Pioneers, the letter also reflects Henry Ford’s many efforts to honor his friend and lifelong hero, which included the re-creation of Edison’s Menlo Park Laboratory and the naming of his new museum and village complex The Edison Institute of Technology. - Brian Wilson, Senior Manager Archives and Library, Benson Ford Research Center 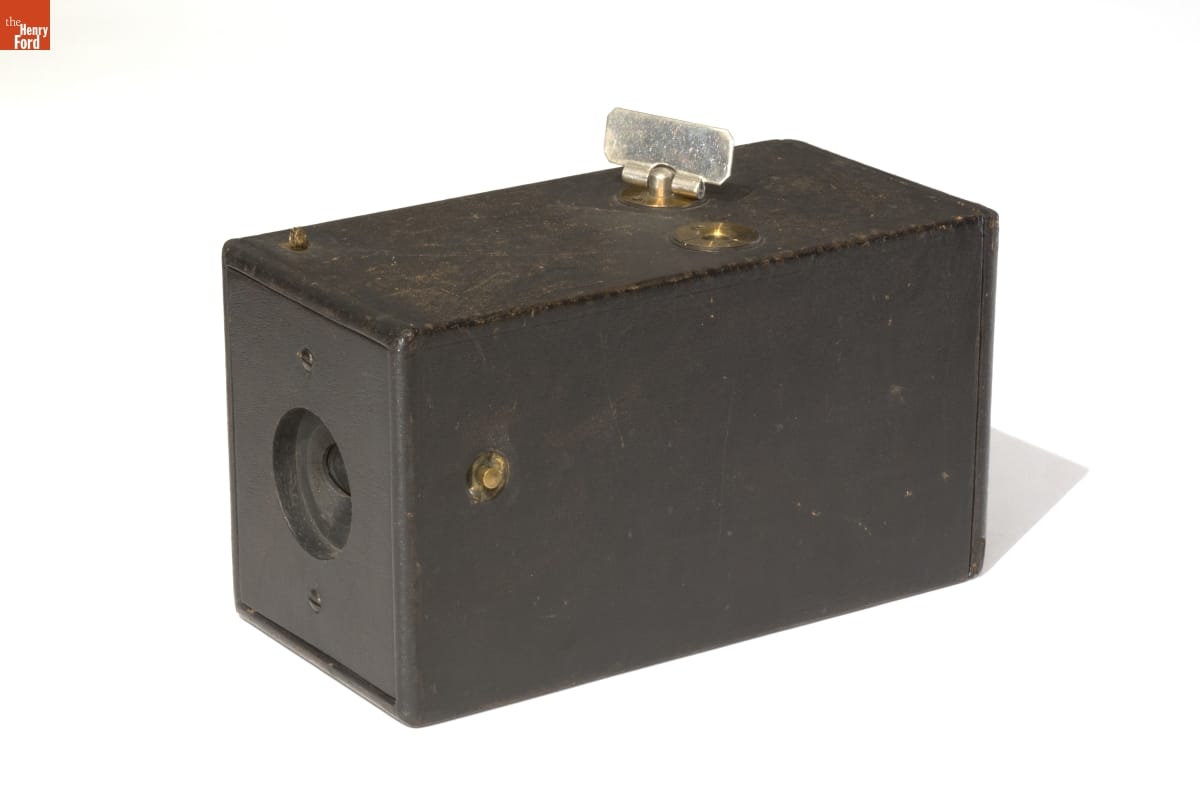 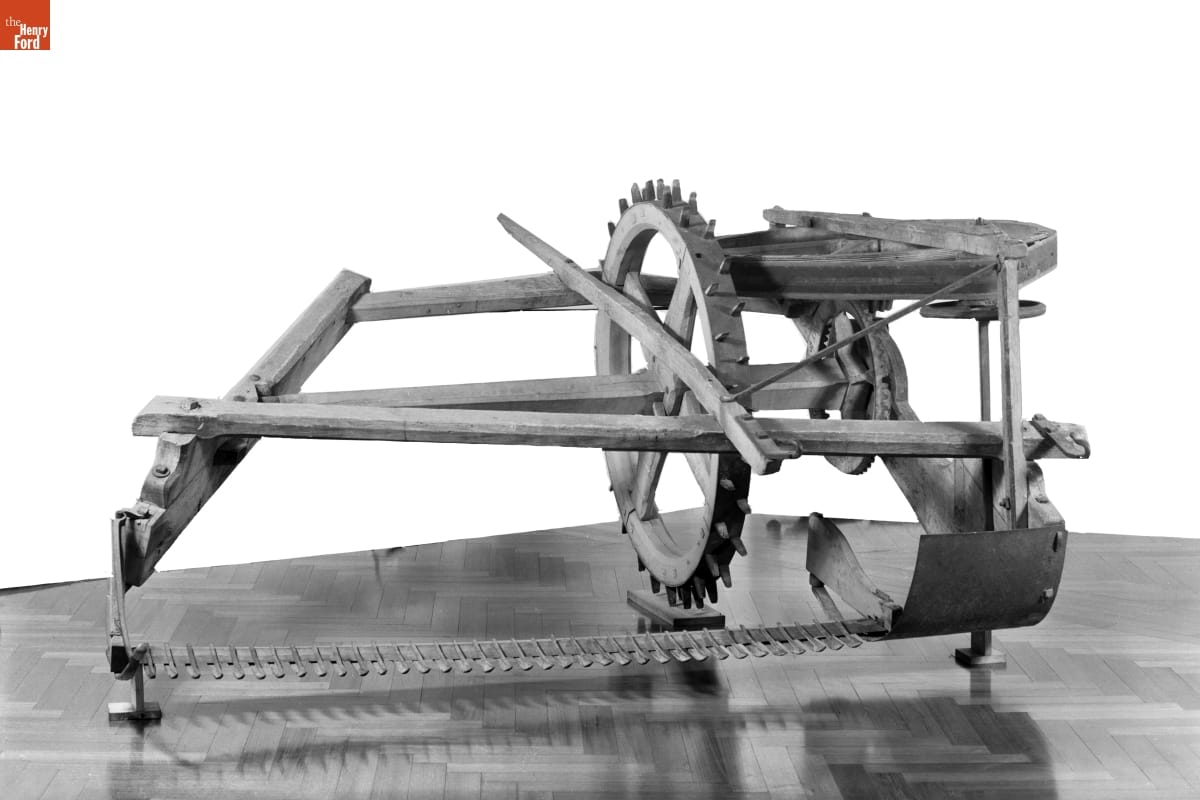 Ambler's Mowing Machine, circa 1836
Henry Ford relied on antique dealers to ferret out "firsts," and the Ambler Moving Machine is an example. Felix Roulet acquired the machine for Ford. He convinced Ford of the merits of the Ambler mower by quoting a paragraph printed in Merritt Finley Miller’s booklet, The Evolution of the Reaping Machine, published by the U.S. Department of Agriculture’s Office of Experiment Stations, Bulletin No. 103 (1902), page 28: “Enoch Ambler of New York, obtained a patent Dec 23, 1834 about which little can be learned. It is understood, however, that he had the first wrought-iron finger bar with steel guards & shoes…” Roulet described the machine to Ford in correspondence, and he assured Ford that “this machine will be a gem in [sic] Mr Fords collection." The machine arrived at Ford Motor Company on November 23, 1924. - Debra Reid, Curator of Agriculture and the Environment