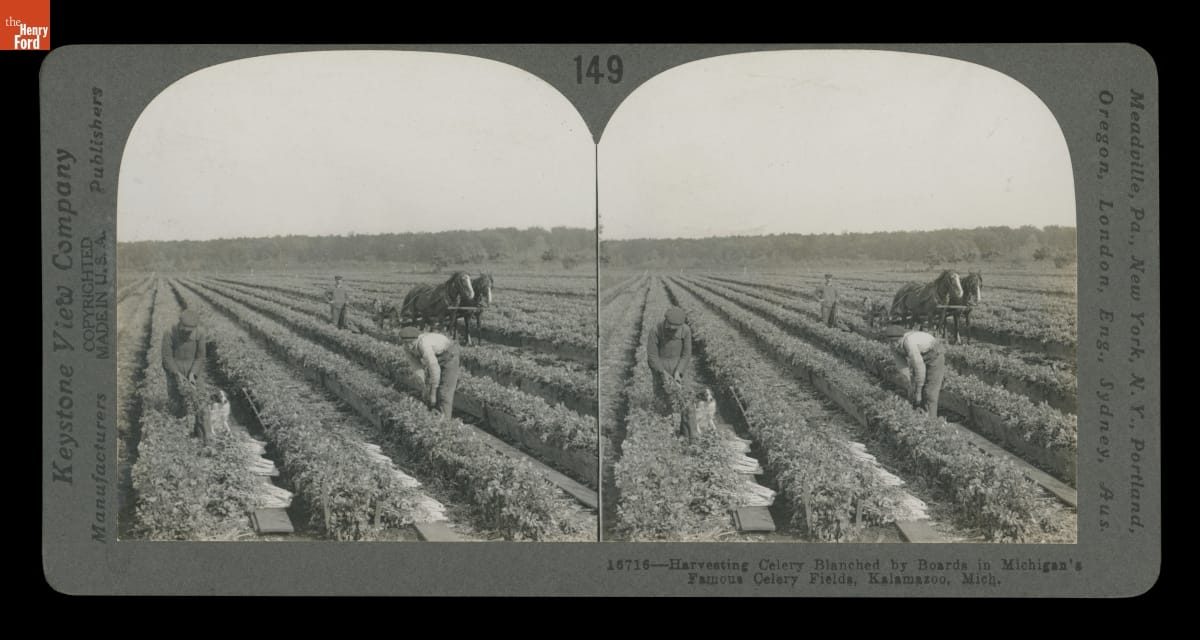 What comes to mind when you think of celery (Apium graveolens L. var. dulce)? The essential ingredient in chicken soup, an attractive tomato drink garnish, a low-calorie and healthy snack (with peanut butter added!), or all of the above? The low-calorie nutritious vegetable (in the same family – Apiaceae -- as the herb, parsley) can also lead you on a journey through local history, consumer demand, patent medicine promotion, and commodity chains that spanned the globe.

The ancient Greeks and Romans harvested seeds from wild celery, also called smallage (Apium graveolens L. var. secalinum). It grew best in temperate climates and in moist soils. The plant stalk and leaves had curative properties and seeds had a strong flavor and scent when dried and when processed into essential oil. Europeans included celery seed into tincture recipes in pharmacopeia and cultivated the crop in gardens by the mid-1600s. Over centuries plant-breeders created celery varieties with taller tastier stalks. Thus, celery shifted from a landrace (a plant evolving in a location over time) to a market garden crop by the mid-19th century. Celery growers in the Grand Rapids area helped make it an international commodity. 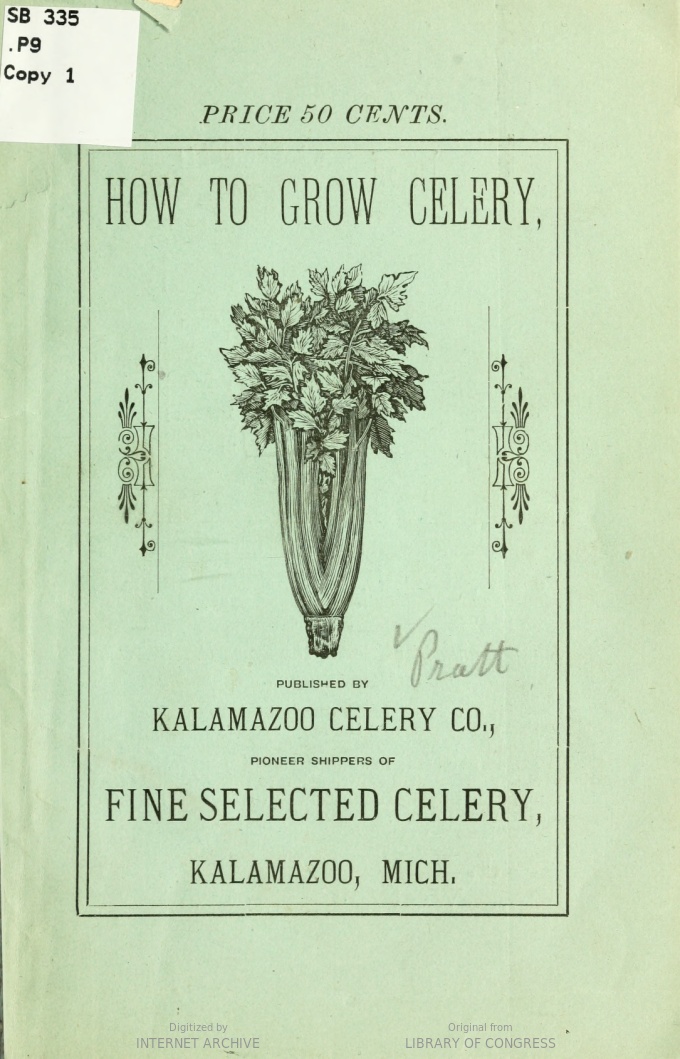 The introduction and expansion of celery cultivation in west central Michigan began in the decades following removal and confinement of indigenous people. Maps indicate the rapid changes that occurred as lands once tended by the Match-E-Be-Nash-She-Wish Band of Potawatomi became the property of Euro-Americans. 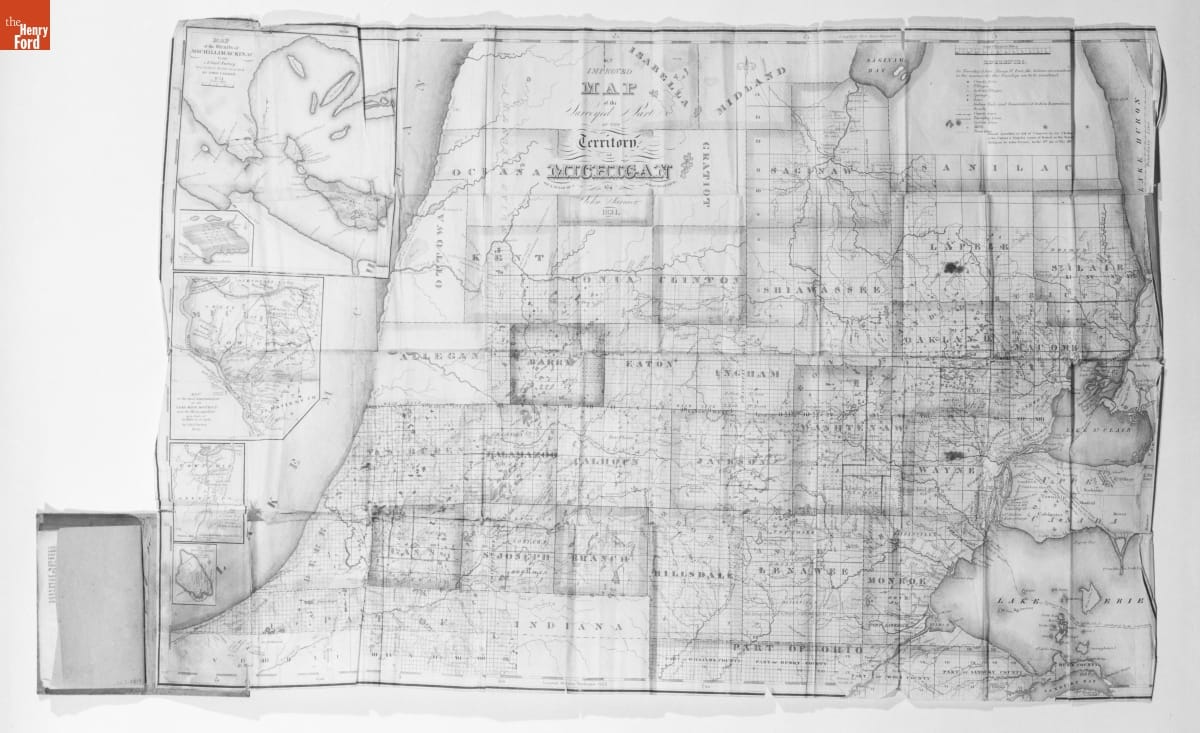 John Farmer published this map in 1831 and marketed it as “The Emigrant’s Guide; or, Pocket Gazetteer of the Surveyed Part of Michigan.” It included “An improved map of the surveyed part of the Territory of Michigan.” THF136462

The wetlands that once sustained indigenous agriculture became a commodity that other entrepreneurs used to build a celery empire. The map that J. H. Young produced in 1835, “The Tourist’s Pocket Map of Michigan,” implies a leisurely pursuit, but instead, developing land into productive farms consumed time and money, and it required brute force. Yet, settlement equated to “progress” and economic growth in the expanding nation and in the territory of Michigan. 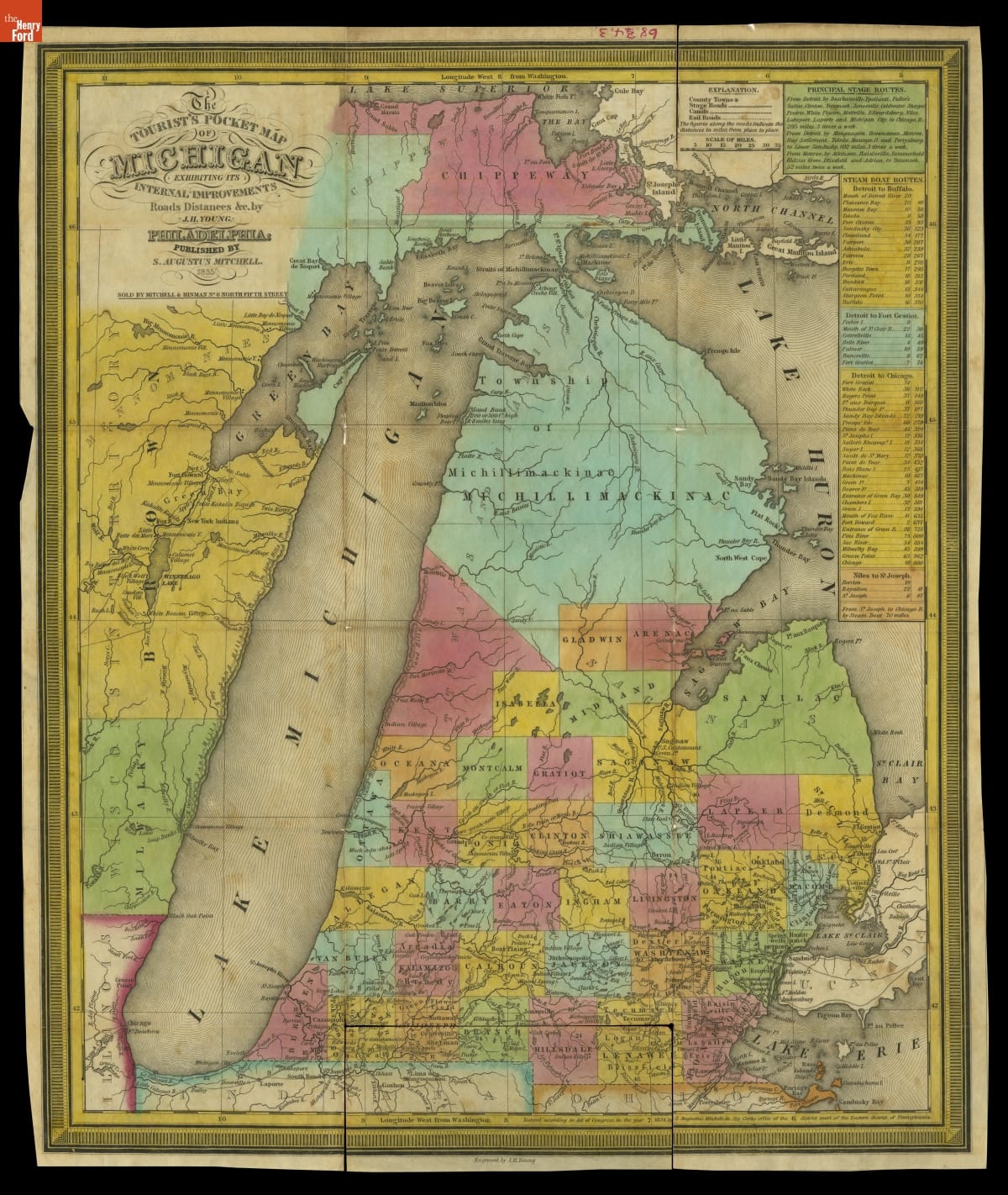 Celery Entrepreneurs
Different individuals, all migrants to the area, receive credit for launching the celery enterprise. George Taylor, a Scottish market gardener, reputedly introduced commercial celery growing in the United States when he settled in Kalamazoo in 1855.

Other individuals, all well-heeled citizens of the area received credit as celery pioneers. Joseph Dunkley, an immigrant from Somersetshire, England, established celery fields by 1866 north of Kalamazoo and began shipping his crop via rail in 1880 to eastern and southern markets. Glenn Douglass Stuart received most acclaim -- “Were the lovers of this esculent herb to have a voice he would be crowned what he is already, ‘The Celery King’.” Stuart arrived from Gowanda, New York, via Oberlin, Ohio, in 1883, and by 1892 his biography in the 1892 Portrait and Biographical Record claimed that his firm (based in celery) employed one-quarter of the Kalamazoo population. 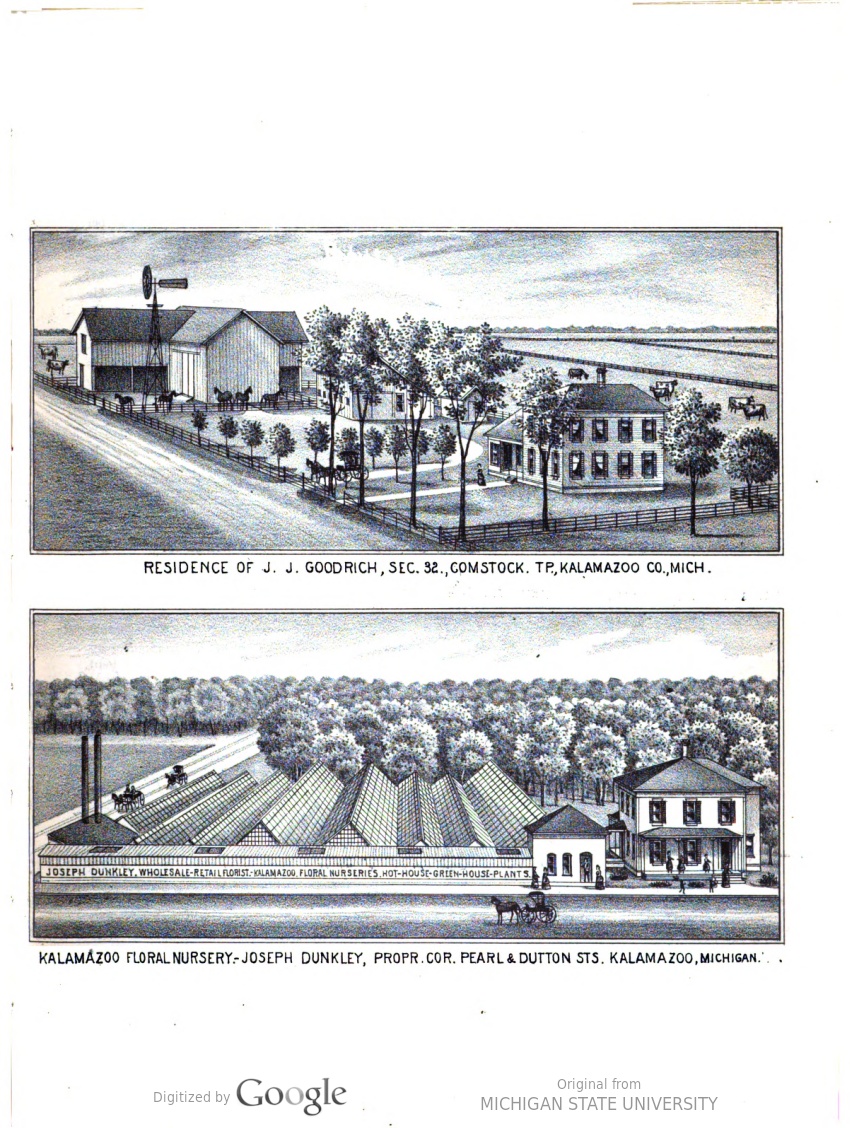 Lands further west developed as celery fields later. Celery pioneer George Hudson introduced the crop to Grand Haven around 1878, according to the 1892 history of Ottawa, County, Michigan. Hudson immigrated from Devonshire, England, worked as a market gardener in New York, and a lumberman in Spring Lake before settling down to celery in the Grand Rapids area.

Immense fields of celery thrived by 1880, and dominated in celery production to the 1940s, earning two cities on both ends of the celery zone the names “Celery City” (Kalamazoo) and “Celery Center” (Hudsonville).

Laborers in the Fields
While some immigrants received accolades for establishing the industry, other individuals received little recognition for the labor they performed. Families who migrated from The Netherlands did the bulk of the work turning wet soils into fertile celery fields between Kalamazoo and Hudsonville. Stereographs and postcards depict the intense physical labor that farm owners and laborers performed. 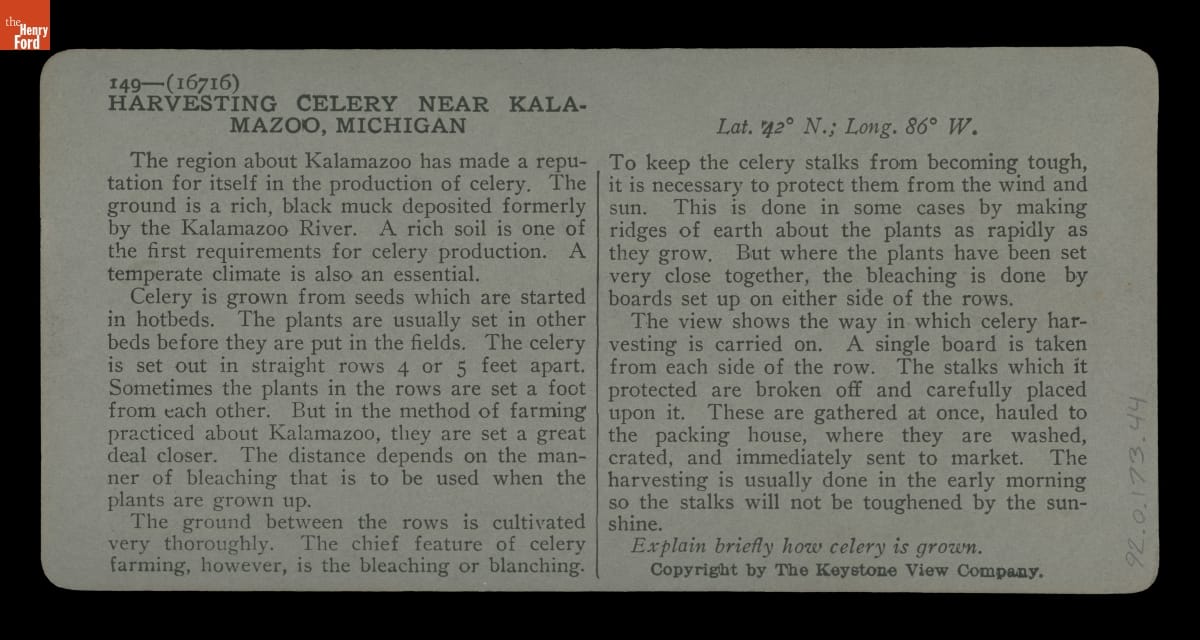 Growing Celery
Before celery growing became concentrated in the area near Grand Rapids, market gardeners raised the spring vegetable and sold it directly to customers in public markets. The May 15, 1849 issue of The Michigan Farmer included growing directions from an English gardener. He advised planting the seeds in January in a greenhouse (and following with additional plantings in February and March to stagger harvests and meet market demand). Then growers should transplant the seedlings to the garden and protect the plant with a “hand glass.” Growers then earthed up the celery, setting the plants in trenches and hilling the soil around them to shield stalks and leaves from the sun. This reduced the acidic taste and stringiness of the stalks.

Such intensive cultivation practices yielded a crop that met the demand of wealthier customers seeking a spring tonic. A speaker explained the advantages of celery to members of the Kalamazoo Agricultural Society in 1850 -- celery was “peculiarly acceptable because it comes when our horticulture has no other fresh supplies to offer us.” The only other vegetables available at the time included potatoes, turnips, and cabbage. Such intensive 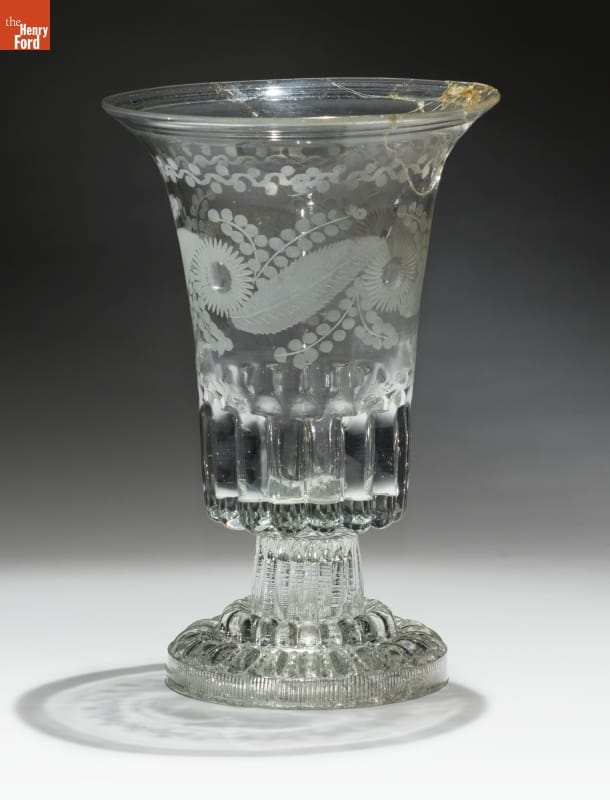 The cost of celery declined as mass production and marketing reduced the cost per bunch. This shifted celery from a delicacy to an essential vegetable for a growing non-gardening population.

Celery after harvest, took other forms. 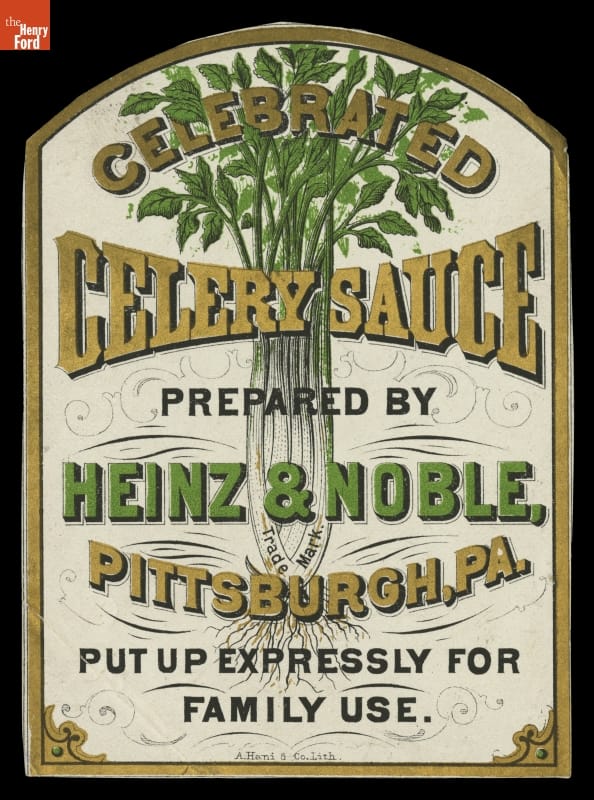 Product Label for Celebrated Celery Sauce by Heinz & Noble, "Put Up Expressly for Family Use," 1871. THF117109 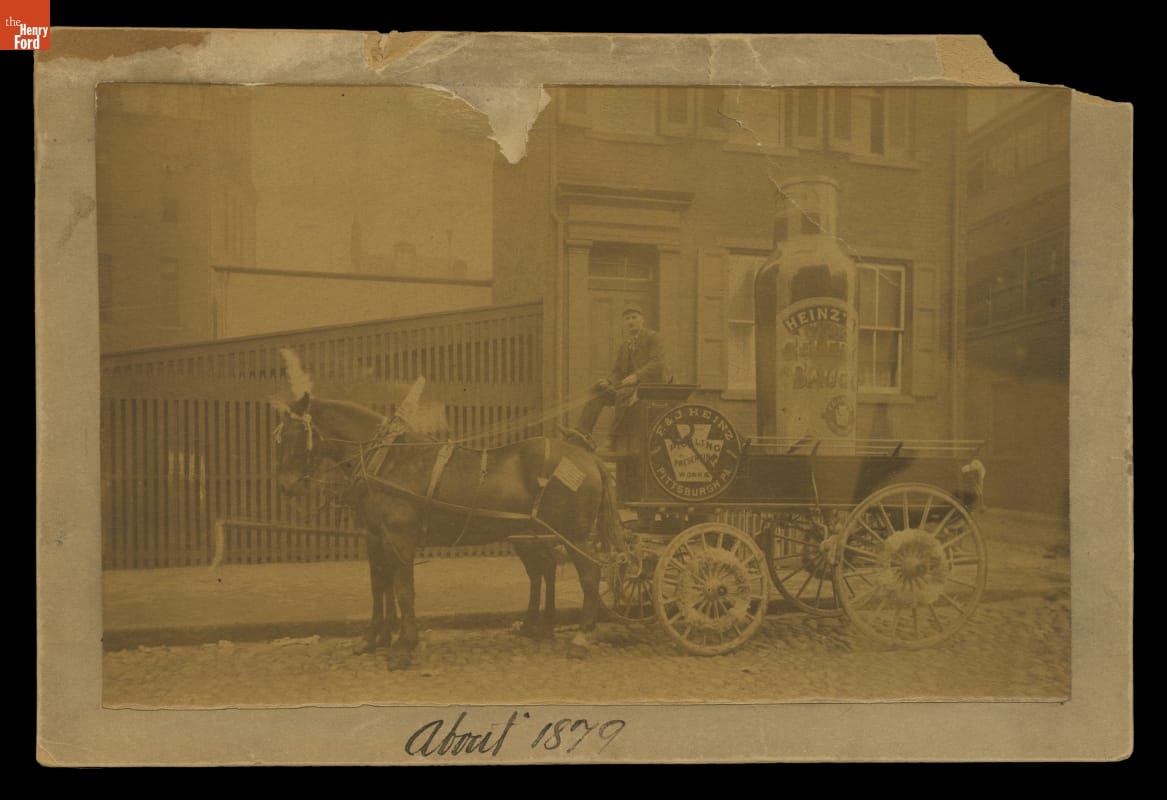 Celery, the vegetable grown around Grand Rapids, attracted the attention of health food entrepreneurs like Dr. Vincent C. Price (1832-1914). He purchased Tryabita Celery Food Company in Battle Creek, Michigan, in 1902 and operated it as Price Cereal Food Company. He also produced and marketed Dr. Price’s Wheat Flake Celery Food as essential for the health of vegetarians and the infirm. 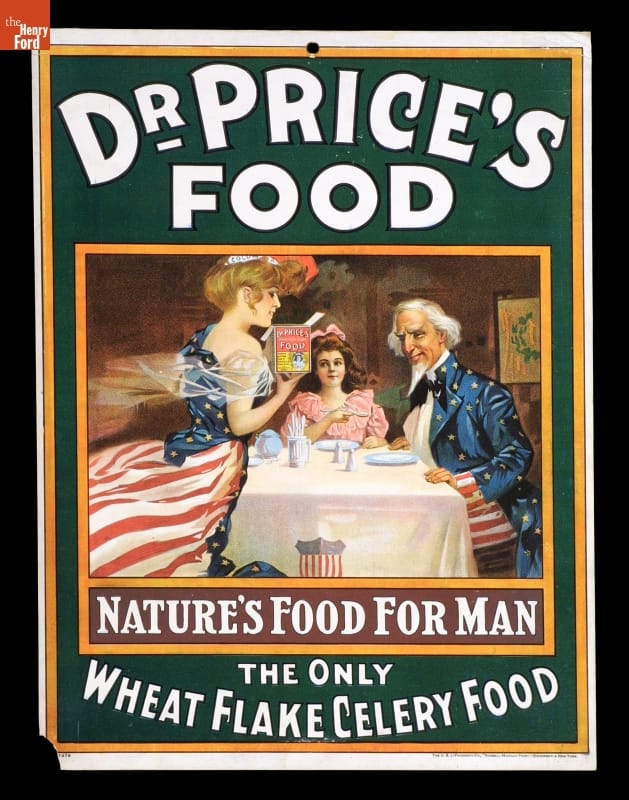 Celery growers in the Grand Rapids area helped establish the crop in Sanford, Florida, in 1895. Growers planted in the fall and harvested in the spring. By 1898 they started shipping their crop via refrigerated railcars to northern markets including Philadelphia and New York City. California growers also established celery fields from Kalamazoo stock by the late 1890s, but their harvest reached market during the fall, thus theoretically avoiding direct competition with other growing areas.

Celery did not appear on lists of common garden vegetables because creating a tasty crop required more work than most hobby gardeners wanted to commit to the crop. Thus, celery did not usually appear in photographs or graphic arts that depicted garden baskets laden with potatoes, beets, cabbage, turnips, and other vegetables. This poster from World War I proves an exception, featuring a schoolboy with a healthy bunch of celery in his basket (on the left side, between the onions and the beets). 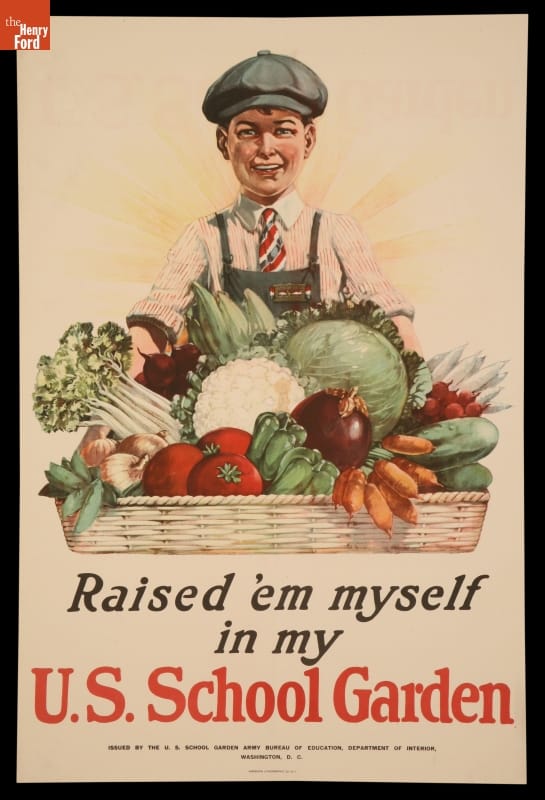 As salads became a more common element of American dinners, fresh celery gained more visibility. This advertisement for Heinz vinegar (an essential salad-dressing ingredient) included a bunch of celery, along with another relatively new addition to American dinners, iceberg lettuce (behind the celery and the vinegar bottle). 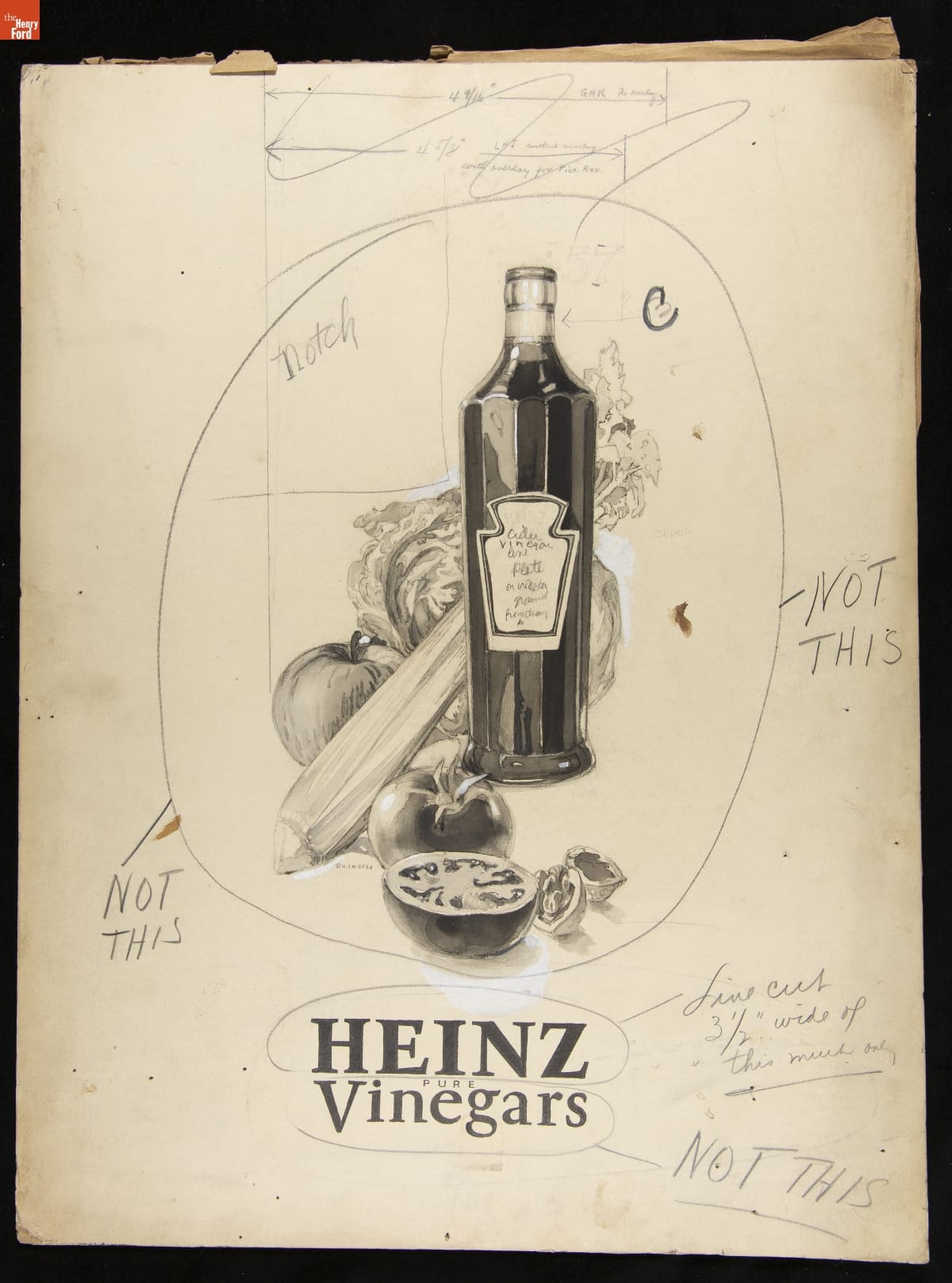 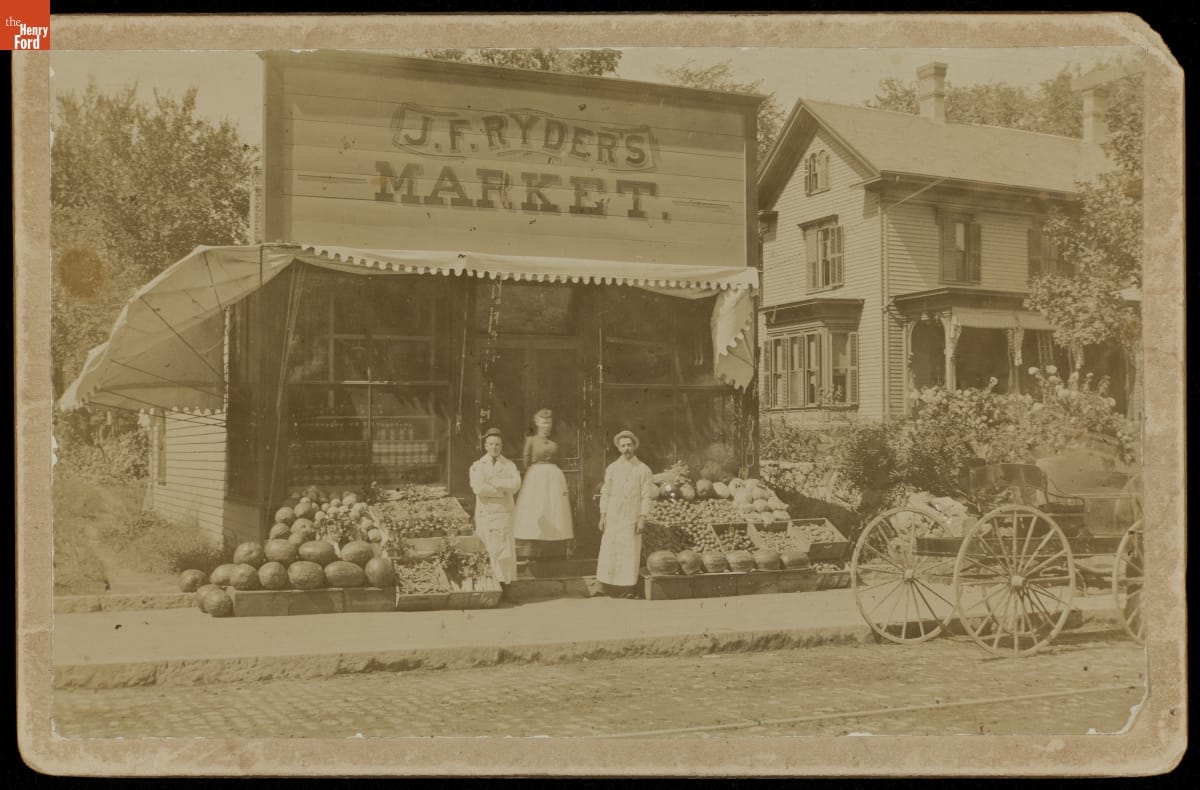 Celery reached consumers in packing crates. Storekeepers usually displayed the crop in the crate, as this image of J. F. Ryder’s Market in Maine, shows.

Grower cooperatives helped expand markets during the early 20th century. The Celery Growers of Michigan existed at least by 1935, the year that growers specified six standard packages for celery. This container was a "square" at the ends (8 inches by 8 inches) and it held celery bunches laid flat that were 10 inches to 18 inches in length. 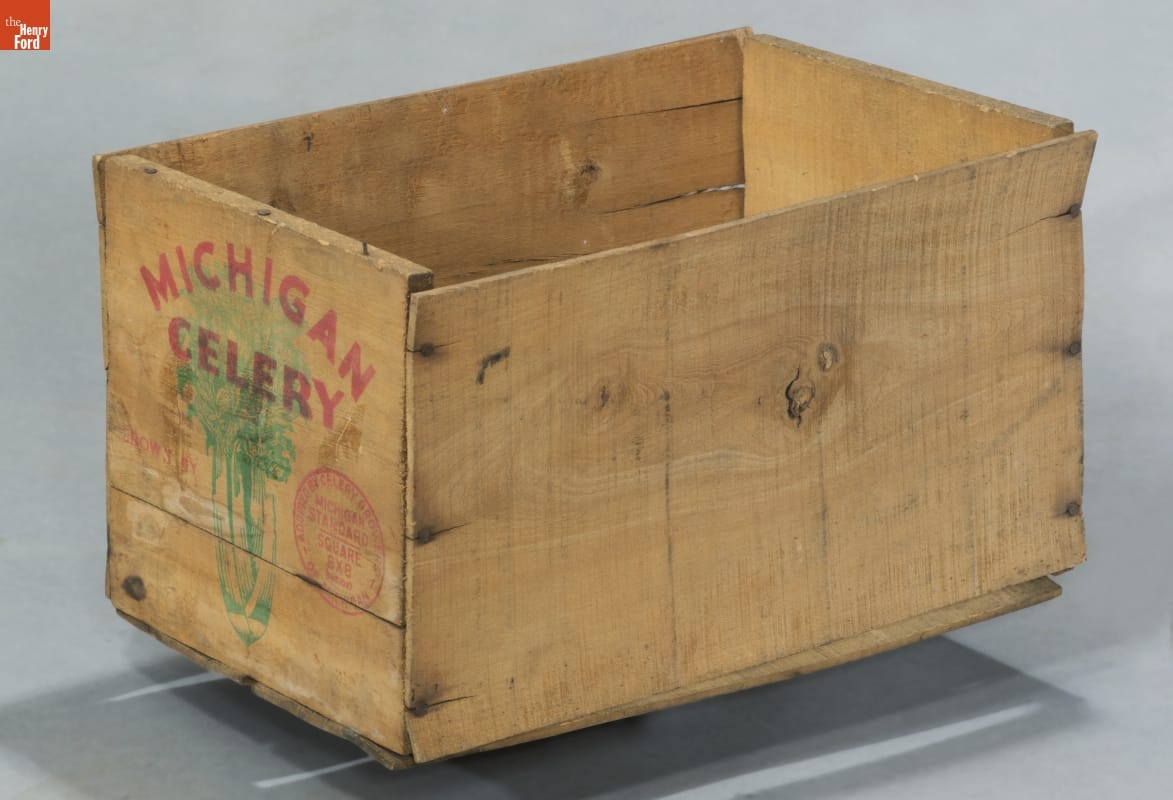 This “square” packing crate likely came full of celery from the farm operated by Ralph Schut, a descendant of Dutch immigrants in Georgetown Township/Hudsonville, aka “Celery Center.”THF173353

Historically, celery was much more than a garnish in your favorite tomato-juice drink. 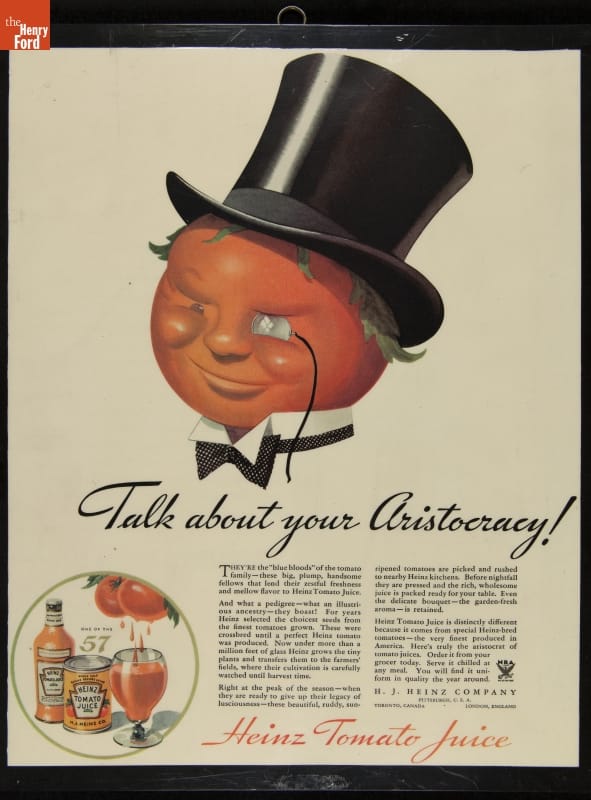 Heinz Tomato Juice Advertisement, “Talk About Your Aristocracy!,” circa 1935. THF252238

Why are there more tulips in Holland and the Grand Rapids area today than celery? Growers responded to disease affecting their crops and increased competition reducing their market dominant by concentrating their resources on horticulture. Many celery growers already had green houses and operated nurseries, so they diversified their production by adding bedding plants and flowers to their market crops.

The region’s celery history remains visible through the Celery Flats Interpretive Center in Portage and in celery fields managed by grower-members of the Michigan Celery Cooperative, founded in 1951.