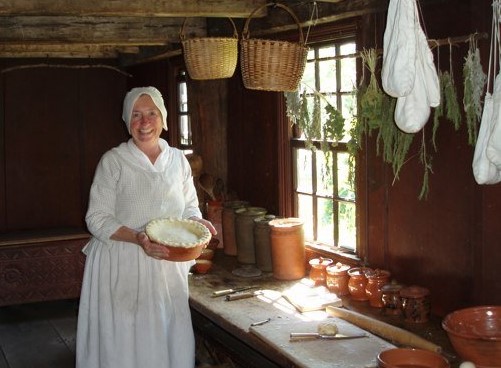 Recently, I sat down with Master Presenter Cindy Melotti, house lead at the Ford Home, to chat with her about 17 years at The Henry Ford. In the first installment of that interview, Cindy talked about her teaching background, her work at the Ford Home and other Village buildings, some of her favorite interactions with guests, and more. In this second installment, she offers insights about how historic cooking in Greenfield Village is far different than modern cooking at home.

What was it like cooking in the village? Did you notice any difference cooking at Daggett, say, and cooking at home?

When I first started as a presenter, I had never baked bread or made a pie before. I was a working mother, so I didn't have time to play around. I used the typical shortcuts. So it was a shock working that first season at Daggett [Farmhouse] and baking loads of bread and pies. Placing these on the table for us to eat for our 1760 mid-day meal and having guests come in and say it was the most beautiful pie crust or bread they’ve ever seen—I experienced such a sense of accomplishment.

I would go home and brag about making the most wonderful loaf of bread, a pie, or a tart. So, I decided I was going to make these same recipes for Thanksgiving dinner at home. I made the pie crust, and I made wheat bread and… I need to tell you that my husband is still living. Because he said: what was so special about them? Sadly, they didn’t turn out the same. Making bread or a pie in a bake kettle on an open hearth, it's not the same product you get using the same recipe in modern oven.

With the bread and pie baked in the modern oven, I couldn't taste all the flavors. I didn't get the flakiness, and it just wasn't the same. There are some things that you can make in a modern oven, and there's no problem. But there are other things that—you know, when you roast something today, you're actually baking it, right? At Daggett using the open hearth, when you roast something, it's on the spit or the small game roaster that you place against the fire and keep turning it. You can’t get that same flavor. When you go from the open hearth, to wood, to coal, to gas, to electric, and to microwave—every time you go up that ladder, you lose flavor. So, your best flavors come from open hearths or open-air cooking. That's why camping is so much fun.

I think part of it too is the cast iron, like at the Ford Home, where we use cast iron pans and pots that are very well seasoned. We do have a couple of cast iron artifacts that we use there. I mean, it takes 100 years or so to get it that seasoned. You can't buy one off the rack. You can’t get the same flavor. And it might have something to do with the moisture and wood smoke that gets in, because it's not hermetically sealed off like a modern oven is. There's no question many of the recipes cannot be duplicated. They’re good, but they're not what it's like when you're there at that table with the ambience of the time period.

Do you have any further observations about the differences between historical and modern recipes and cooking methods?

Yes, guests might think that because a recipe is from a long time ago, from Daggett in 1760 for instance, that it’s easier to make. That recipes are more complex now than they were in the 1700s. But they’re not. For example, our recipes at Daggett are written in the hand of that century, where they use the long “s” that looks like an “f.” And they use such odd quantities, you sometimes have to have a group discussion to figure out what they're trying to tell you about making the recipe. So recipes at Daggett are very often much more difficult than ones at the Ford Home from 1876.

Of course, it’s difficult at the Ford Home making special recipes for Holiday Nights [in Greenfield Village]. But your everyday dishes for 1876 are pretty basic and easier to make. There isn't a tendency in the 1800s to use a lot of herbs, for instance, as they did in the 1700s. So even for your meat at the Ford Home, you basically use salt and pepper, and there's a lot of lard to flavor it. The food is good, but it's not using difficult flavorings like rosewater and all these other things we use at Daggett or the Giddings [Family] Home. Recipes from the 1700s are much fancier than what I put on my own table.

Also, cooking methods in the 1700s had more challenges in the kitchen. In the Ford Home, we have a better understanding of what measurements are needed. In Daggett’s time, they're making huge amounts of food as opposed to what a family would need in the 1800s. For instance, they did all their baking in one day, and they didn't bake more until they needed it.

When you’re cooking on the open hearth or with a wood or coal burning stove, how do you know when food is done? Can you talk more about how to cook using these methods?

When I talk about cooking with guests, what they really want to know is: “how can you successfully cook like this?” And it's not hard, but you need to use all your senses, unlike how we cook today. You feel the temperature of the stove or bake kettle radiating on the skin of your face and your hands. This gives you a hint about the temperature and when you need to add more fuel to the fire. On the hearth, you can see it. But with the wood burning stove, you feel when you have to put more wood in.

To find out how your food is cooking, you use your sense of smell, and you can look and see how something's cooking. But your ears help too, because you can hear if something is over boiling or if it's boiling at all. There’s even a recipe for something that says: cook until you hear it sizzle. That was part of the recipe, to listen to it. Of course, you taste it to see if it's done. So the biggest difference with cooking in a historical kitchen is that you are actively engaged with all your senses in the process. We don't do that now. We set timers. We walk away because we can.

It's fun as a presenter to do on a daily basis. But would I want to do it every day again? I don't think so. And it's also fun for us to cook because we have guests coming into the homes. And we share what we're doing, how we're doing it, and why. I get the best reactions from guests when we have difficulty with something because it's not common to what we do. They love to see how we solve these problems that we've never faced before, because we don't cook like this all the time. 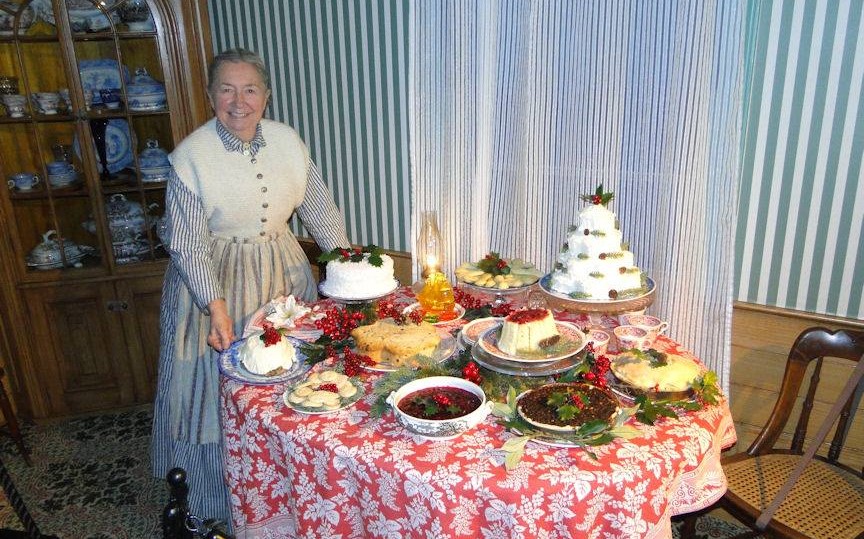 Holiday Nights in the Ford Home, with a Charlotte Russe dessert on middle-right side of table. / Photo by Ken Giorlando

What is the most difficult recipe at the Ford Home?

Charlotte Russe is probably the most difficult thing to make. We display it on the dining room table during Holiday Nights. It’s a sponge cake that you cut into strips, and you line the sides of a mold with the strips. And then you place raspberry or strawberry jelly or jam at the bottom of the mold. Then you make homemade custard and put it in the center and let it firm up.

It's a tricky little recipe to get to turn out right and come out of the mold. We finally figured out after all these years a good way to do that. We flip it over onto a plate and leave it out for a while. And once the mold is off, we put it back in a really cold place. So it stays firm as we display it on the table.

There are other recipes from the Ford Home that are my favorites. Of course, there's the pumpkin fritters that are just to die for. 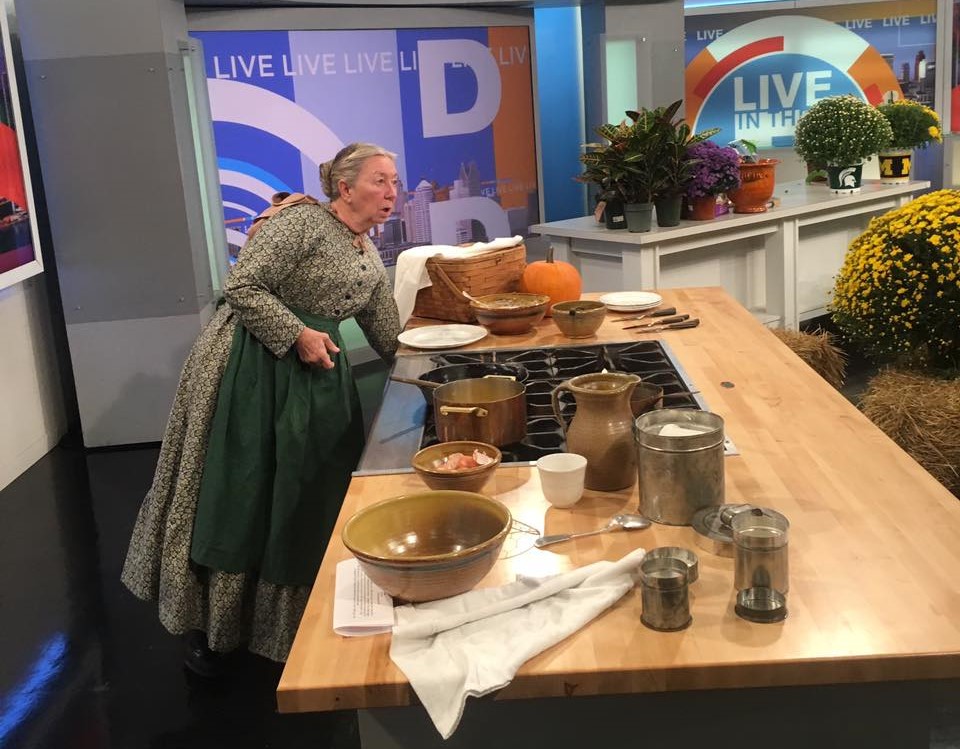 Frying pumpkin fritters on the set of Live in the D on WDIV Local 4 in 2017. / Photo by Jim Johnson

Speaking of pumpkin fritters, I remember you appeared on a local news show where you made them in their studio kitchen. Can you tell me more about that experience?

Ah, yes. That was so fun. It was Fall Flavor Weekends in 2017, and the first weekend was already over. It was a Monday afternoon, and I was working at Daggett with two of our other talented presenters, Kellie and Erica. And Mary Weikum, who manages domestic life, stopped by and asked if I wanted to be on television the next morning at 10 a.m. on WDIV Local 4. She suggested I make the pumpkin fritters from the Ford Home with some extra batter we had. So, I agreed to do it.

And then I looked at Erica and Kelly and said: “what have I got myself into?” They both encouraged me and said: “Cindy, you do this 1,000 times in a day, just be yourself.” I thought, I can do that. But then again, it was difficult having to think through all of the preparations. We had to get the ingredients, and the appropriate historic utensils and bowls. To think of all those things, then be down there by 9 a.m. and then cook on television, it was daunting. Fortunately, [The Henry Ford staffer] Jim Johnson came with me, and kept me calm.

One of the funnier parts I remember was making a reference to lard and emphasizing that’s how the pumpkin fritters are made. Two of the show’s hosts went into an uproar about how they can’t eat lard—yet they obviously wanted to try some. I mean, they were just going on and on about lard when we were not on camera. So that's why I make this little reference on camera to say, yes, we fry them in lard! And then later on, I could hear them hollering “lard” across the studio while cameras were rolling. Oh my gosh!

Tati Amare, a Live in the D host, made more batter while we were frying them in the studio kitchen. After the hosts tried them, they wanted more. Eventually, the people in the control room sent down a plate so they didn’t go without. Tati and I took a picture together, and she said I was her new BFF. It was just a wonderful experience.