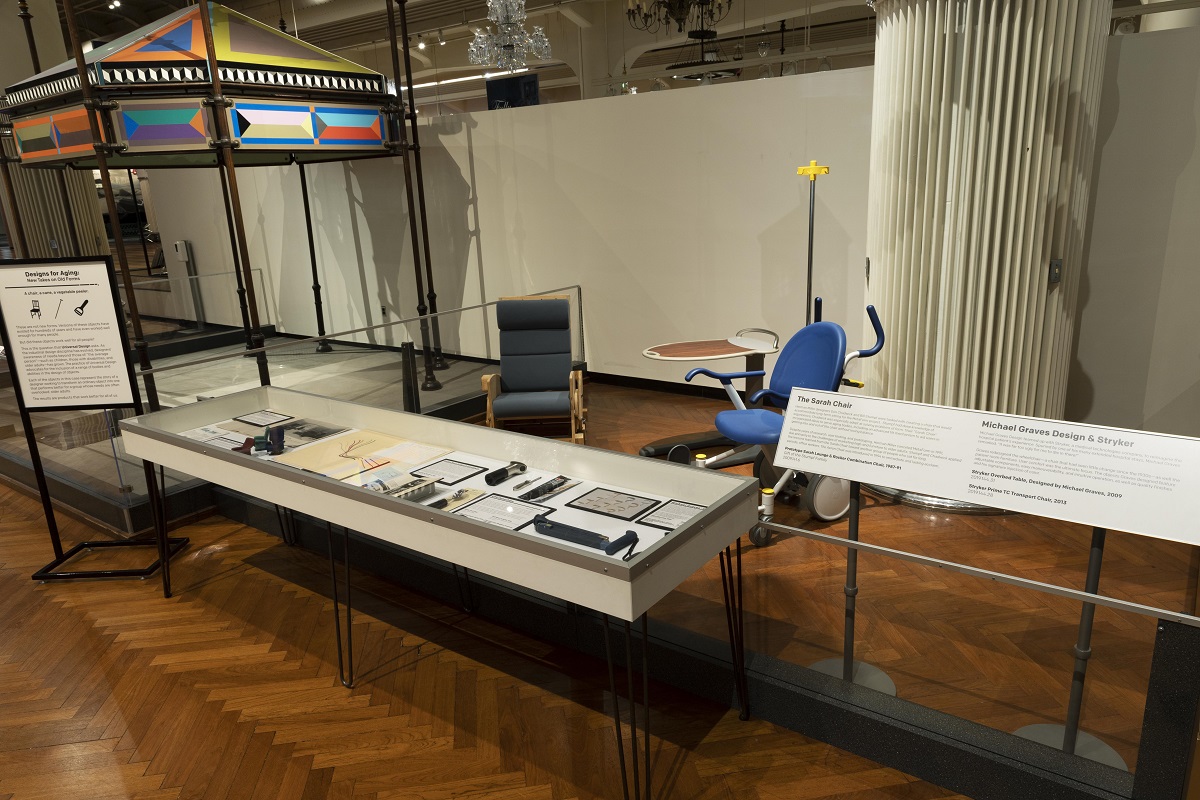 A chair, a cane, a vegetable peeler.

These are not new forms. Versions of these objects have existed for hundreds of years and have even worked well enough for many people.

But did these objects work well for all people?

This is the question that Universal Design asks. As the industrial design discipline has evolved, designers’ awareness of needs beyond those of “the average person”—such as children, those with disabilities, and older adults—has grown. The practice of Universal Design advocates for the inclusion of a range of bodies and abilities in the design of objects.

Each of the objects below represent the story of a designer working to transform an ordinary object into one that performs better for a group whose needs are often overlooked: older adults.

The results are products that work better for all of us.

Disability Rights & the “Graying of America”

The American disability rights movement gained traction and national attention by the mid-1970s. Activists advocated for equitable care for all people and framed accessibility as a civil rights issue—modeling their language after the 1964 Civil Rights Act.

At the same time, concerns were raised about the future impacts of the baby boom and decreasing fertility rates: soon, the media reported, elderly people would outnumber children.

The disability rights movement and the “graying of America” converged and designers began to explore what part design could play in creating equitable and accessible environments for older adults. 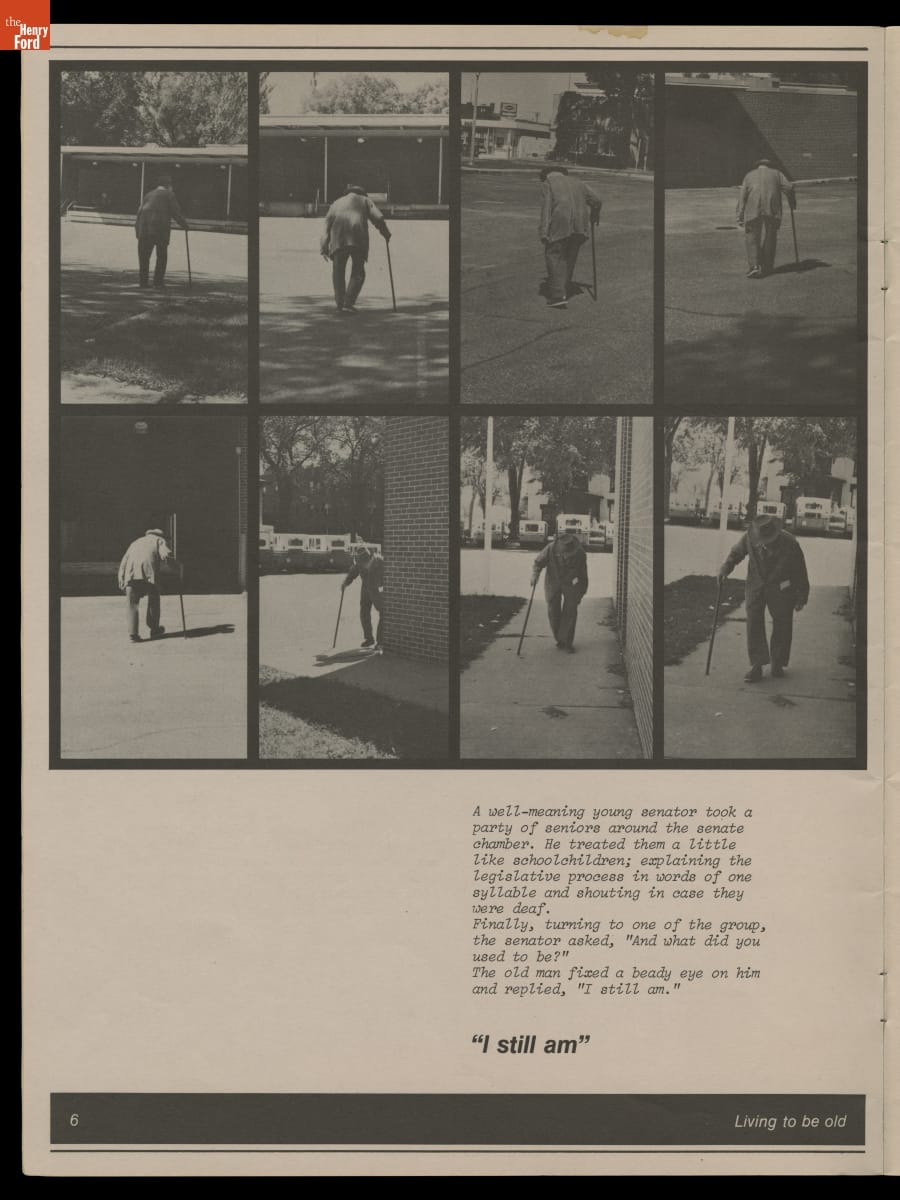 In the 1970s, Michigan-based furniture company Herman Miller embarked upon exploratory design projects for the elderly.

The Notal project was their first foray into design specifically for older adults, researching how their day-to-day lives were affected by ill-suited environments.

The MetaForm project was established in the mid-1980s. The project’s leaders hoped to reimagine whole environments to best suit the challenges that accompany aging—enabling people to “age in place,” at home instead of an institution. A variety of high-profile consultants and designers were hired to explore solutions for five specific areas—sleeping, long-term sitting, food preparation, material handling, and personal hygiene. 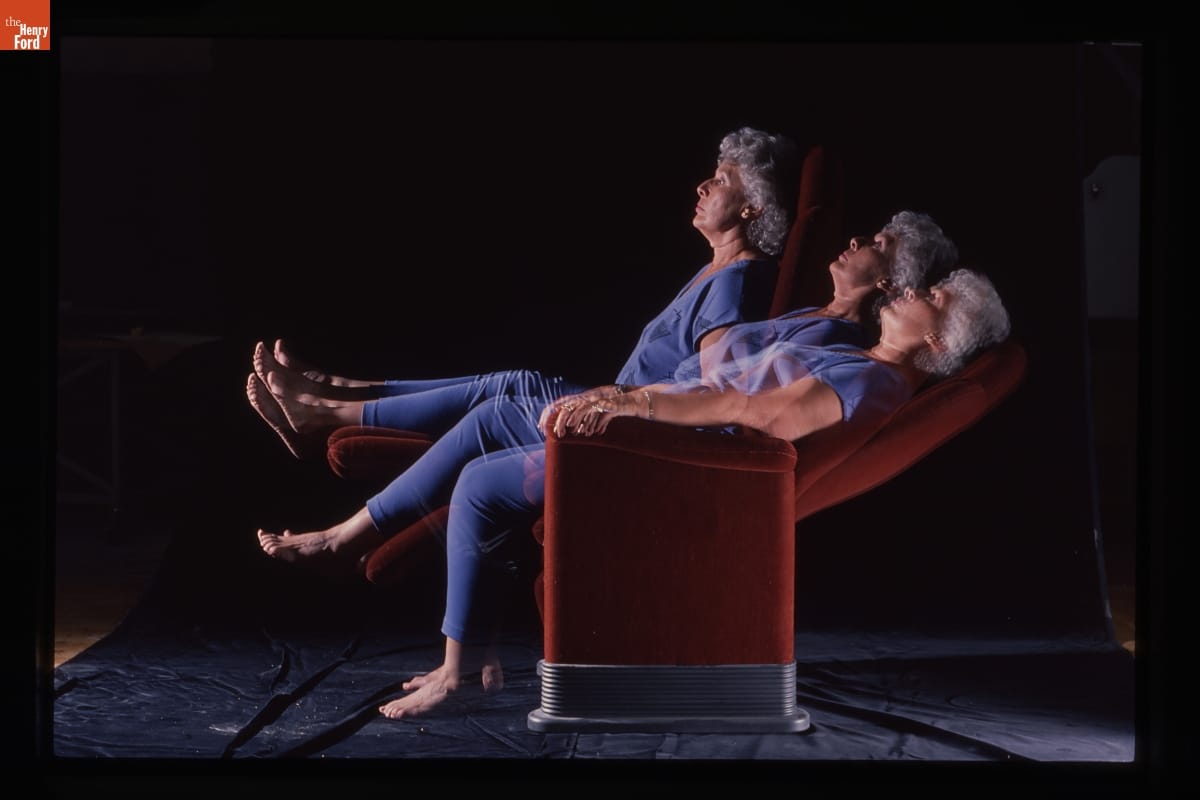 Herman Miller designers Don Chadwick and Bill Stumpf were tasked with creating a chair that would accommodate long-term sitting for the MetaForm project.

Stumpf had deep knowledge of ergonomics; Chadwick was especially adept at solving problems of form. Their “Sarah Chair” incorporated ideas to serve aging bodies, including an advanced tilt mechanism to aid users in getting into and out of the chair without losing balance.

Despite years of research, user testing, and prototyping, Herman Miller canceled MetaForm in 1991, primarily due to the challenges of marketing high-end furniture to older adults.

Stumpf and Chadwick applied the lessons learned from the Sarah Chair toward another group of people who sat for long periods: office workers. The Aeron Chair was introduced in 1994 to immediate and lasting acclaim. 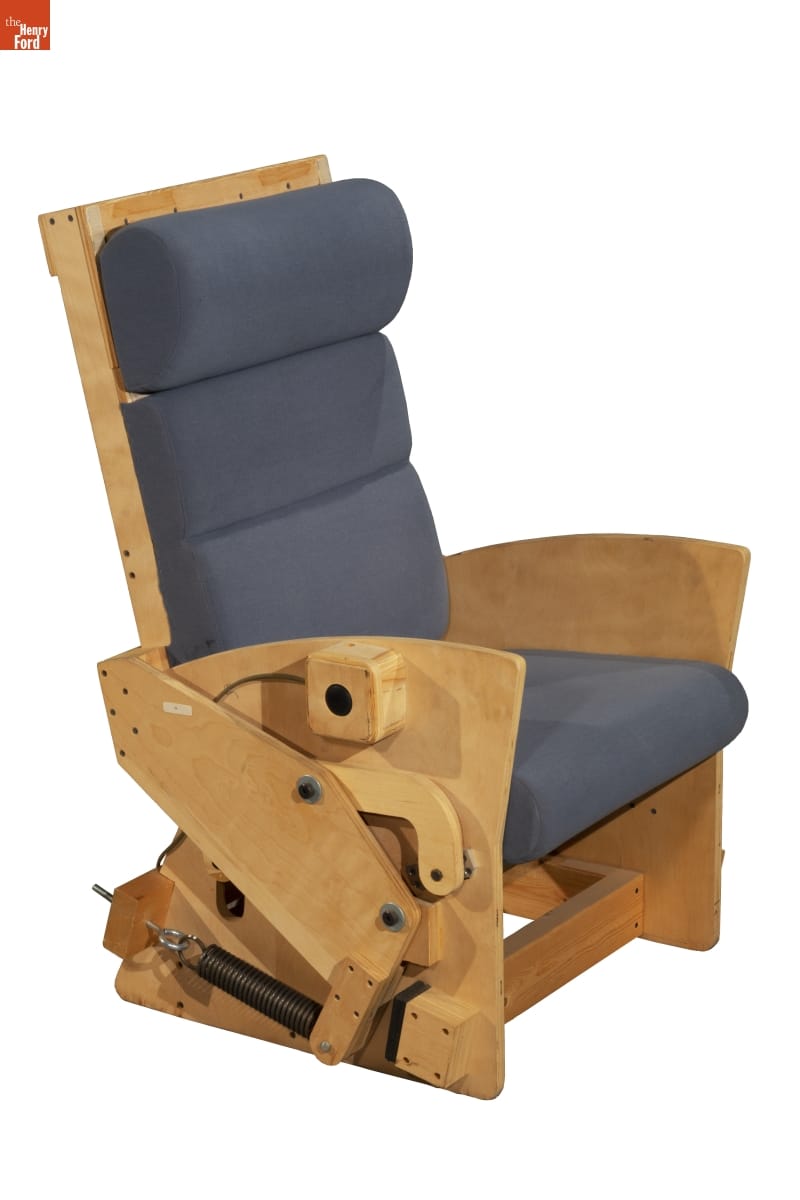 In the 1980s, Sam and Betsey Farber had retired from a long career in the cookware industry and were enjoying travel. While on vacation, Betsey was trying to peel an apple but was having difficulty due to the arthritis in her hands. The traditional vegetable peeler she was using was difficult to grip, especially when applying force. Sam and Betsey realized there was an opportunity to improve this object and called a friend, Davin Stowell of design consultancy Smart Design, and asked him to prototype an easier-to-user peeler.

The OXO Good Grips Swivel Peeler was introduced in 1990. Despite its cost (nearly triple the traditional peeler), it sold well. This relatively simple improvement to a classic tool increased usability for a wide range of people. The OXO Good Grips line of tools now numbers in the hundreds. 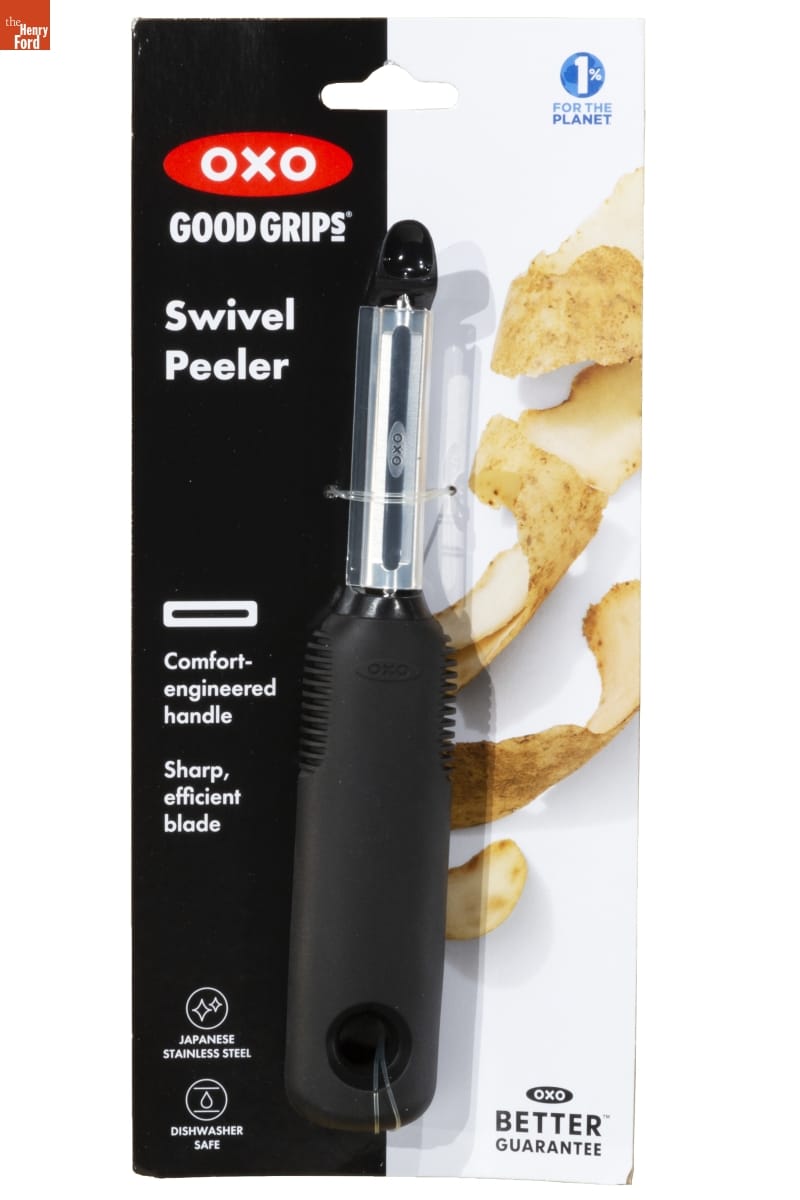 As a young industrial designer working for the firm of design legend Raymond Loewy, Patricia Moore often challenged her superiors to design more accessibly, for a wider variety of body types and abilities. Looking to better understand the challenges of an elderly person, Moore employed a professional makeup artist and transformed herself into an 80-year-old woman using a latex mask and custom prosthetics. She even put baby oil in her eyes to blur her vision, stuffed wax in her ears to muffle sound, and bound her body to restrict movement. She then went out into the world—observing, interacting, and connecting with people as an elderly woman—with the ultimate goal of using these experiences to help design better products for aging adults.

Moore disguised herself for over three years, conducting research and becoming a sought-after expert in design for aging populations. She has spent decades consulting on projects, including Herman Miller’s MetaForm and OXO Good Grips. 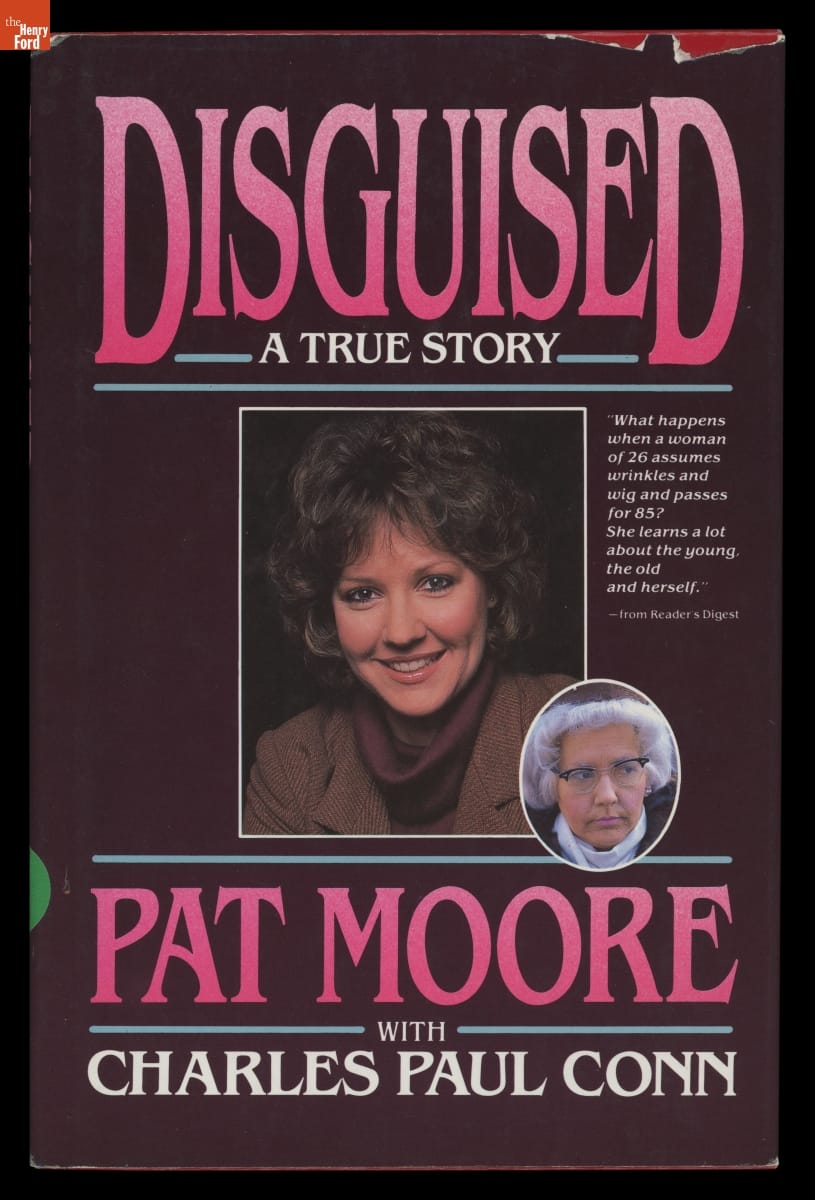 Architect and industrial designer Michael Graves developed an interest in Universal Design and the healthcare industry after an infection left him paralyzed from the waist down in 2003. In the years after his own ability shift, Graves redesigned the utilitarian objects that become indispensable with age and disability—objects that didn't hold the attention of most mainstream industrial designers. He focused on the cane as an object particularly ripe for revision, prototyping numerous ergonomic handles and experimenting with the grip. 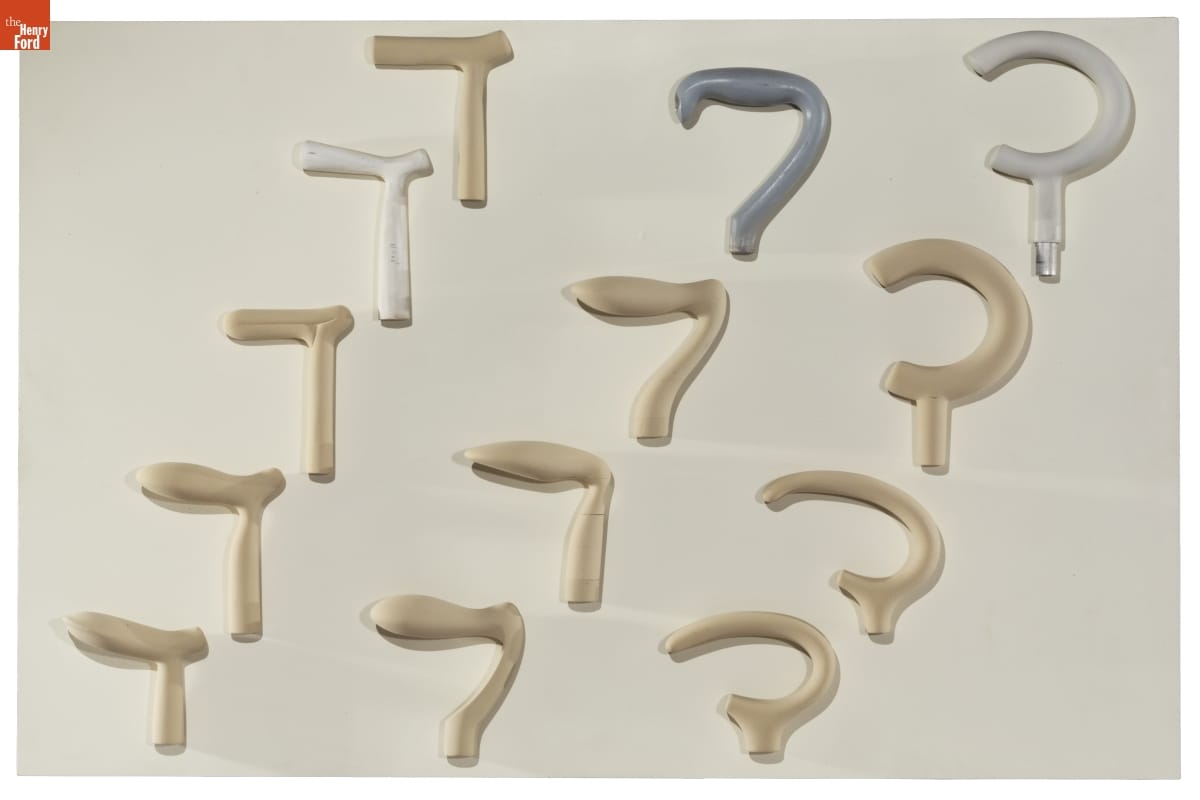 The canes that Graves designed, as well as those created by his design firm after his death in 2015, are adaptable to bodies as well as lifestyles. They are lightweight, available in numerous colors, adjustable to accommodate differing heights, and foldable for storage. 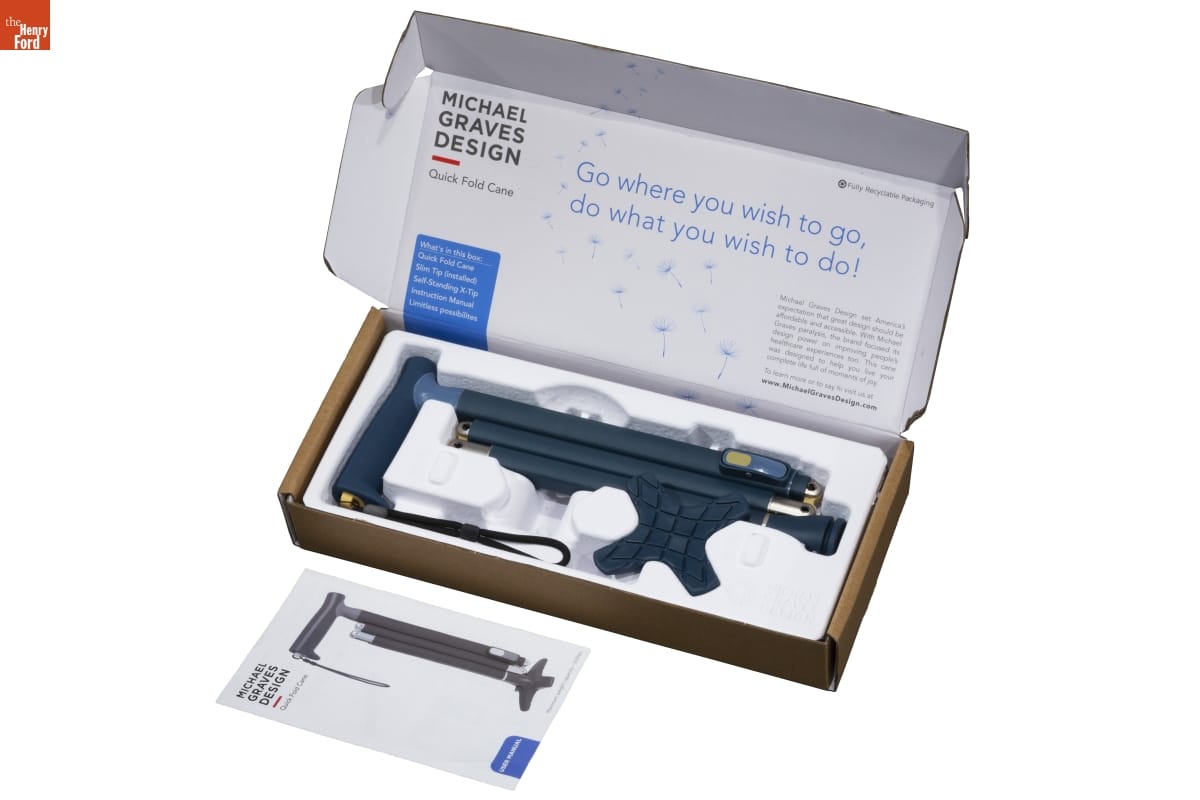 Michael Graves Design teamed up with Stryker, a medical technologies company, to reimagine the hospital patient’s experience. Spurred by one of his many extended hospital stays, Michael Graves remarked, “It was far too ugly for me to die in there!” 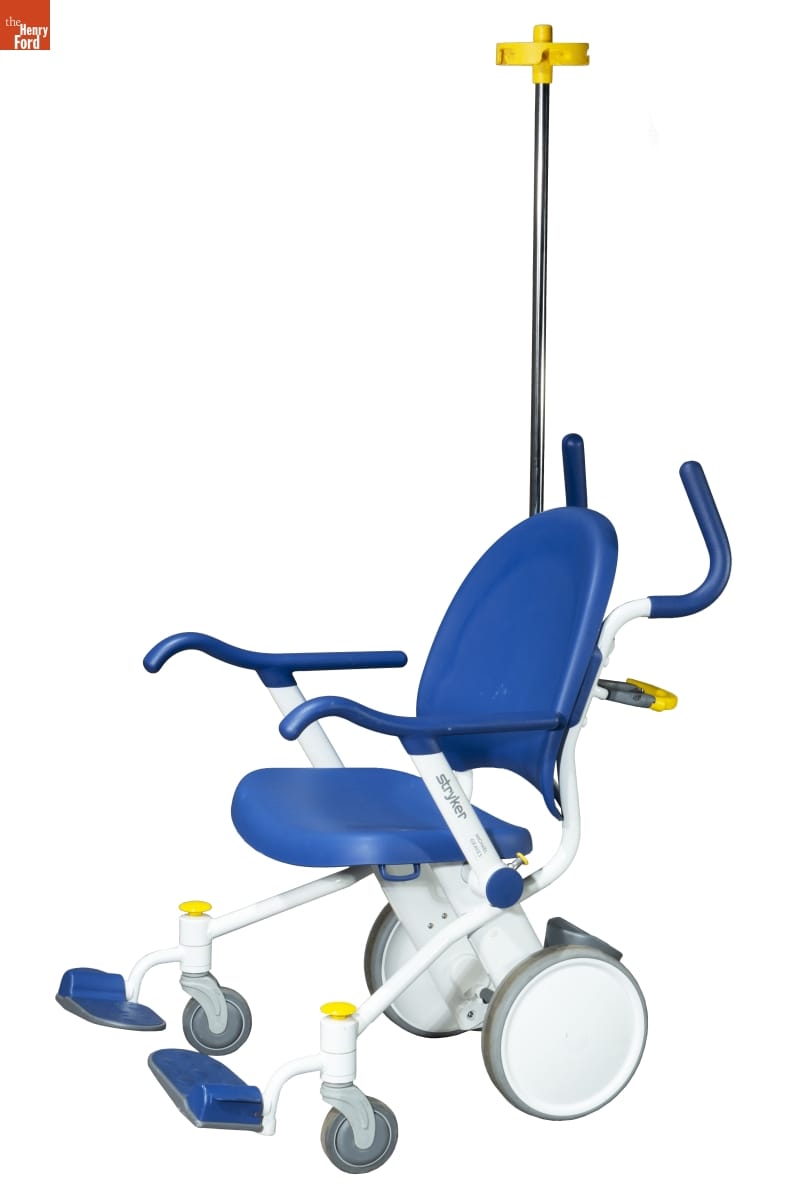 Graves redesigned the wheelchair—a chair that had seen little change since the 1930s—as well patient room furniture. User comfort was the ultimate focus. The objects Graves designed feature adjustable components, easy maneuverability, and intuitive operation, as well as quality finishes and his signature injection of color.


Katherine White is Associate Curator at The Henry Ford. A temporary exhibit, Designs for Aging: New Takes on Old Forms, curated by Katherine, was on view in Henry Ford Museum of American Innovation from August–October 2022. The content of the exhibition is replicated in this post.