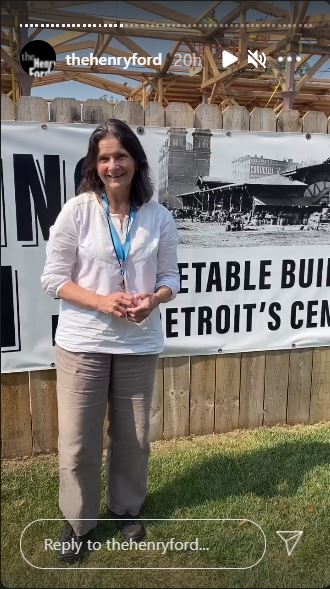 Debra A. Reid, Curator of Agriculture and the Environment at The Henry Ford, answers some questions about the Vegetable Building from Detroit’s Central Market, which is currently being reconstructed in Greenfield Village, on The Henry Ford’s Instagram account, August 5, 2021.

To celebrate National Farmers Market Week last week, some of our staff interviewed Debra A. Reid, Curator of Agriculture and the Environment at The Henry Ford, on site in Greenfield Village, where the Vegetable Building from Detroit’s Central Market is being reconstructed. In case you missed this story on our Instagram account, catch up below! And you can read even more about the Vegetable Building’s history and The Henry Ford’s plans for its future in prior blog posts.

Tell us about the Detroit Central Market Vegetable Building project.

The Detroit Central Market Vegetable Building project is a great museum project because museums collect, preserve, and interpret. We collected this building back in 2003, and it was in storage for almost 20 years, protected. Now it's being reconstructed in Greenfield Village as a hub for future food-related programs.

What is the significance of this Vegetable Building structure from the Detroit Central Market?

This structure is historically significant for a few different reasons. The master builders who are reconstructing it say that it's the most ornate timber-frame structure in North America that they've seen. That relates to another aspect of its significance, because it was designed by an architect who came from Bavaria, John Schaffer. He created the plans, and then there would have been a builder and master timber framers who erected it back in 1860, before it opened in 1861. 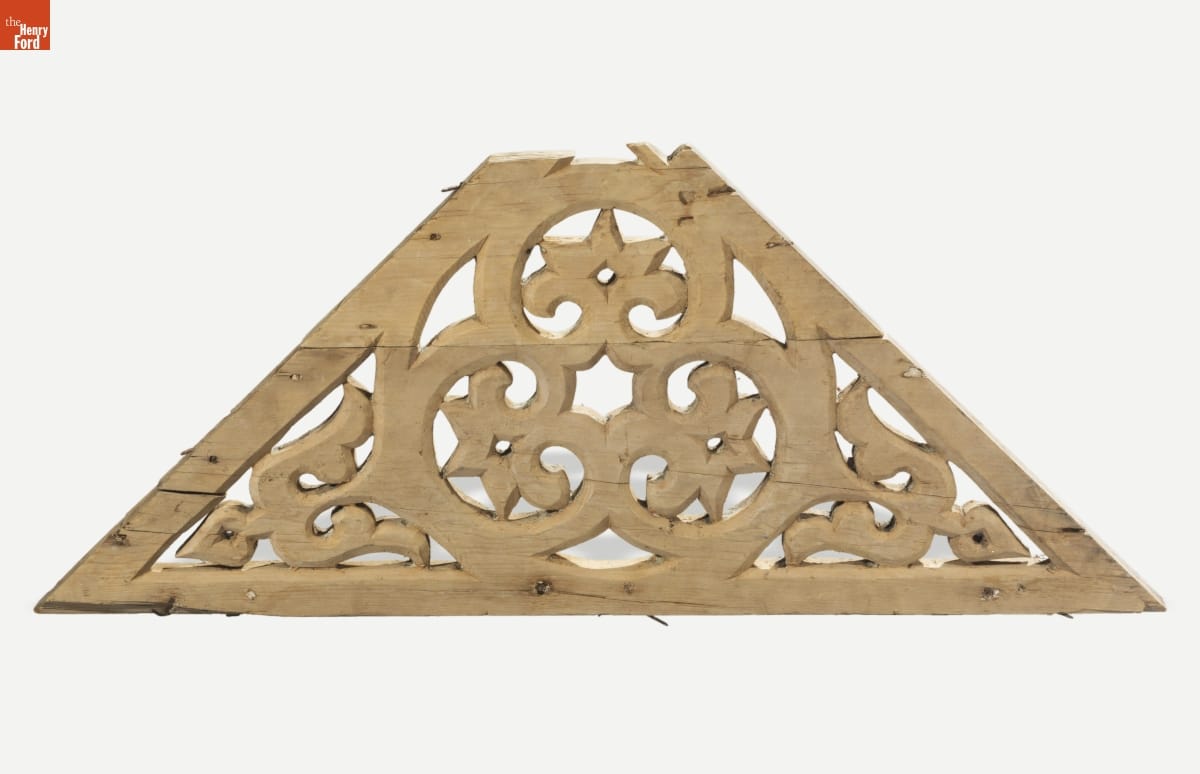 One of the original ornamental wooden brackets from the Detroit Central Market Vegetable Building. / THF173219

It's also an opportunity for us to talk about rural and urban connections, because the City of Detroit established the market to make sure that the citizens in the city could get food. So, it furthered food access and brought the farmers to the city.

How did The Henry Ford acquire the Vegetable Building from Detroit Central Market?

The Henry Ford acquired this building in 2003, purchasing it from the City of Detroit as an effort to save it from demolition—because it was planned for demolition. That was in its 140th year. It had spent 30 years downtown in Detroit, between 1861 and 1894, and then 110 years on Belle Isle. During that 110 years, it had seen plenty of use as a shelter for vehicles and horses, as a riding stable, and as a storage building. Saving it really preserved a huge part of Detroit culture—but also public space culture, because it had been in use that whole 110 years on the public park on Belle Isle.

What’s the process for moving and restoring a historic structure in Greenfield Village?

After The Henry Ford purchased the building, staff and contractors then had to dismantle it, and it was stored until we had the financial support to reconstruct it. Master timber framer Christian and Sons, Incorporated, was hired to dismantle it—and almost 20 years later, they also oversaw the reconstruction of the timber frame roof. The Henry Ford’s recently retired Curator of Historic Structures and Collections Manager Jim McCabe worked with them on the whole process, with the reconstruction currently underway in Greenfield Village. Right now, the master tradesmen are putting purlins on the roof, and sheeting for the slate shingles that will top off the historic structure. 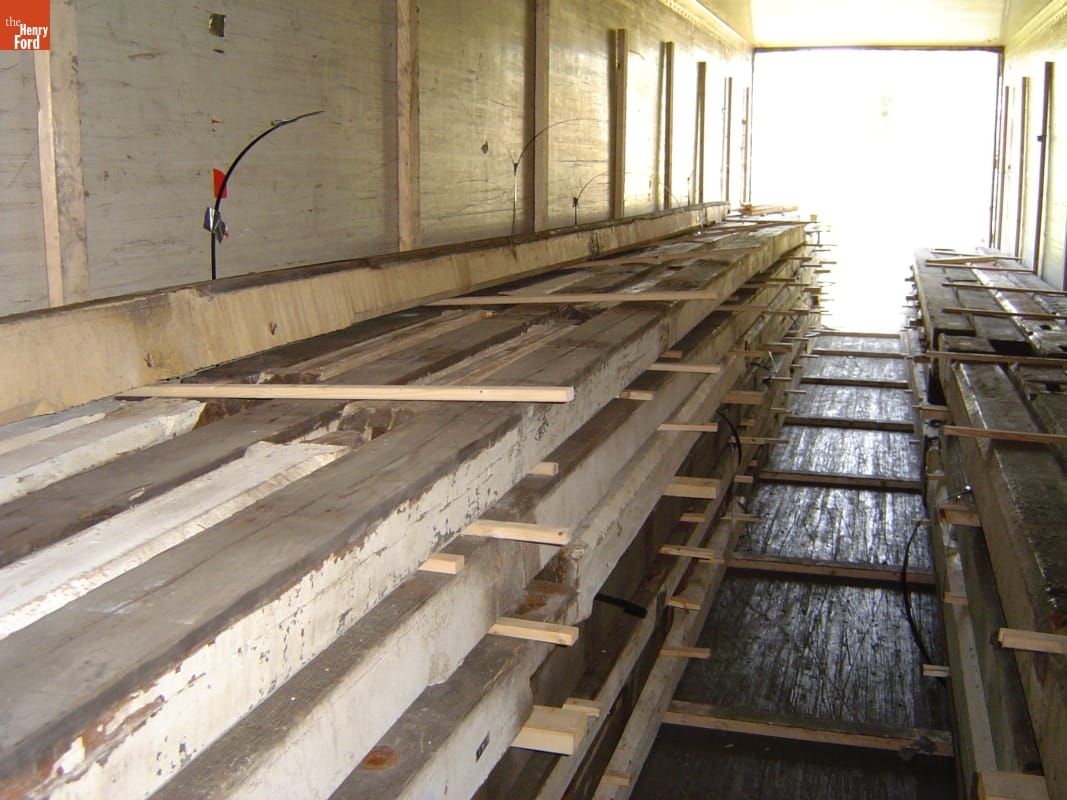 When the Vegetable Building was deconstructed on Belle Isle in 2003, the original materials were carefully tracked and stored so that eventually they could be reconstructed in Greenfield Village. / THF113552

What are the most interesting facets of working on the Detroit Central Market Vegetable Building project?

Working on this project allows me to do history research, which is what I absolutely love to do. I also know that guests have interests that don’t necessarily involve digging into the historic archive.

When we talk to guests, they often ask how much of a building is original. It's an interesting aspect of preservation for this project that half of the columns, 16 of the 32, will be original, and half of them will be replicas, to make sure that the structure is compliant with code and structurally sound engineering.

But beyond that, it's the history. Who were the vendors in the market? Where did they live? What were their family lives? And we're putting together information to create dramatic presentations, performances, and information for daily presenters to help ensure that we can share this fascinating story.

National Farmers Market Week is important for us because we are able to share this work in progress and get to some of the nuances about farmers markets. Detroit Central Market was Detroit’s public market: It was constructed, owned, and operated by the city and engaged many more people, many more vendors, than farmers and market gardeners alone.

But today you might hear the term farmers market, and it often means a farmer-owned and -operated cooperative venture in a community to ensure that farmers who grow produce have customers to sell to directly. So this opportunity to share during National Farmers Market Week helps us celebrate our work, the work of artisans, and the ongoing engagement between growers and you, the consumer.